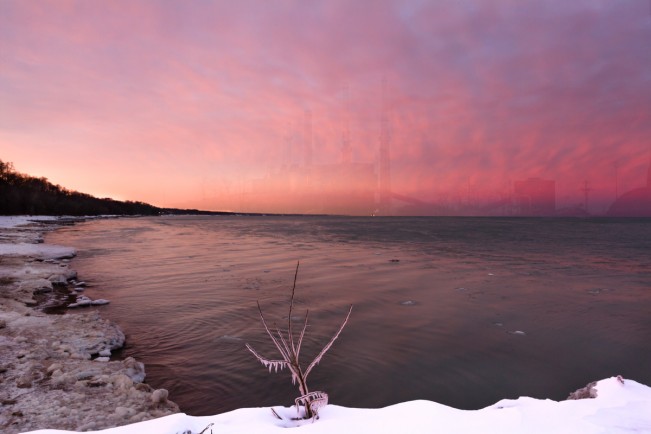 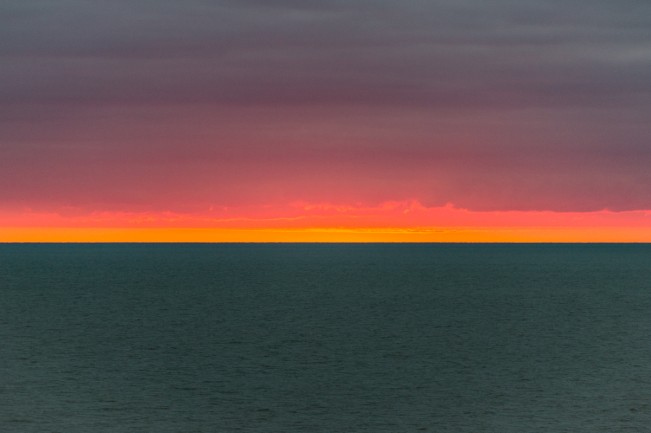 Having lived in Wisconsin my whole life, I have a very personal connection with Lake Michigan, and I know Nelson Armour and Ted Glasoe do too. In their collaborative work, Surface Tension, water conservation and preservation are brought to the minds of their viewers. We are reminded of the natural beauty the lake brings to its visitors and the importance of keeping it around for the future.

Nelson Armour is a Chicago-area artist whose work focuses on rural and urban landscapes, environmental portraiture and photojournalism projects. Raised in a family steeped in the outdoors, he began photographing nature as a teenager and continued with workshops during and after college. Later, during family camping and backpacking trips to the mountains in the western U.S. and Canada, his photography was greatly influenced by Galen Rowell’s approach to visualizing composition and light. He has pursued his craft in courses and workshops and is a member of Jane Fulton Alt’s photography critique group.

Armour has exhibited locally and nationally and has been published in exhibition catalogs. Armour’s solo shows include Eight Photographers, Eight Solo Shows, in Eight Chicago Neighborhoods, sponsored by the Filter Photo Festival 2012 and At Work/At Home, En El Trabajo/En Casa at Art on Armitage.

Ted Glasoe is a Chicago-area artist whose unique photographic work conveys the compelling and unexpected alliance of nature and urban environments, with an emphasis on images of Lake Michigan and Chicago’s natural landscape. The Minnesota native studied acting at the University of Wisconsin-Madison. He moved to Chicago soon after graduation and was immediately taken with the city’s architectural and natural beauty thanks to its proximity to Lake Michigan. This appreciation sparked an interest in exploring the relationship between the two through an artistic lens.

With his photography, Glasoe aims to capture surprising, often unnoticed moments that happen around us every day. His photographs highlight the singular character of the Chicago-area landscape and the ever-changing moods of nearby Lake Michigan. Glasoe has appeared in several local photography shows and has been recognized with various honors, including first place award in the Chicago Park District “Nature in Chicago” Digital Photo Contest. 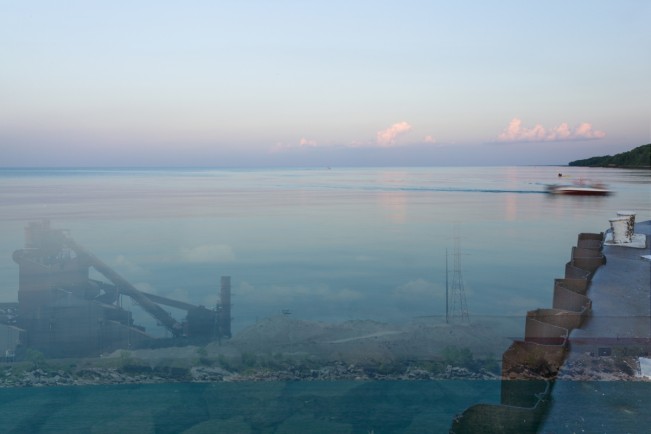 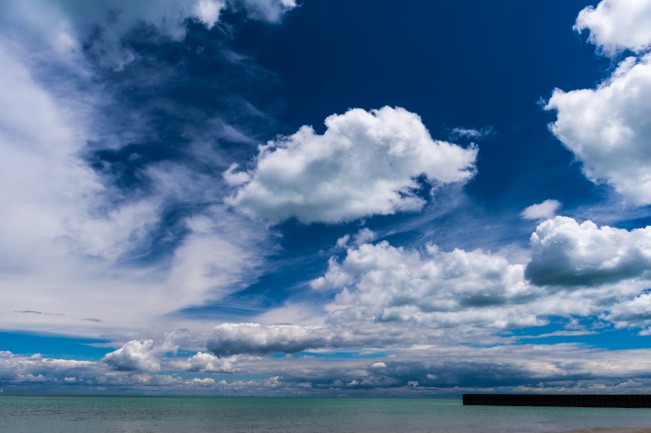 Surface Tension – A Metaphor for the World’s Water

It’s a beautiful summer day in Chicago. The sun beats down on the azure waters of Lake Michigan, the fifth-largest lake in the world. Gentle waves lap the sands of a beach. Puffy clouds drift across the sky. But no one is in the water. The lifeguards stand watch over an empty beach.

Why? Because raw sewage has fouled the water. It was released into the lake after a torrential rain overwhelmed the storm sewers. This scene has become all too common along the shores of Lake Michigan and much of the world’s water supply. 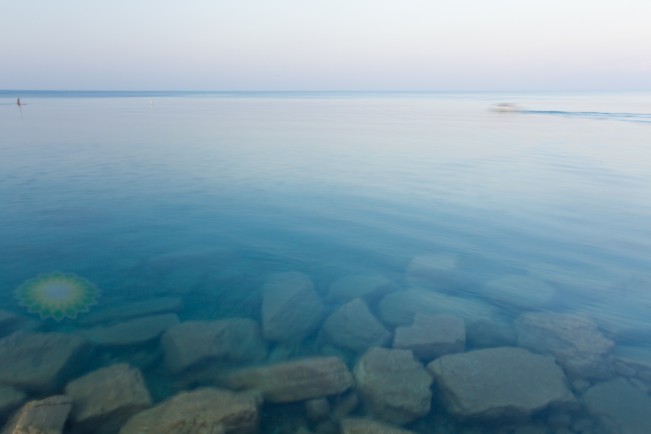 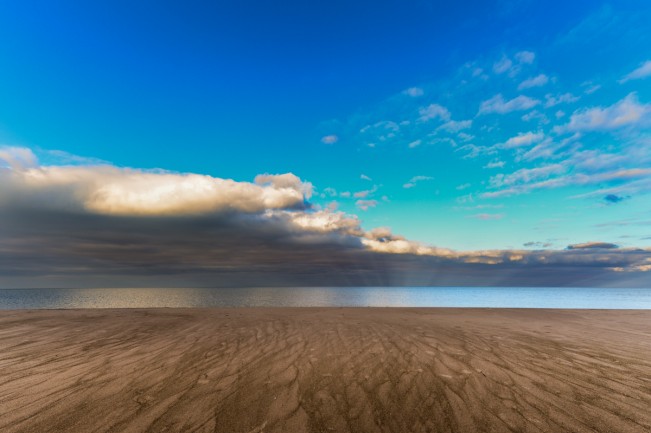 ©Ted Glasoe, Rivulets in the Sand

But untreated municipal sewage overflows are only one of the threats to the health of our lake. According to the Alliance for the Great Lakes (greatlakes.org), other major areas of concern are nutrient runoff/algae growth, pollution from petroleum refineries and other industries, pharmaceutical pollution, and invasive species.

So we are faced with an uncomfortable conclusion: Lake Michigan is a beautiful, vast, life-sustaining natural wonder and, at the same time, it is under silent siege from pollution and other perils. 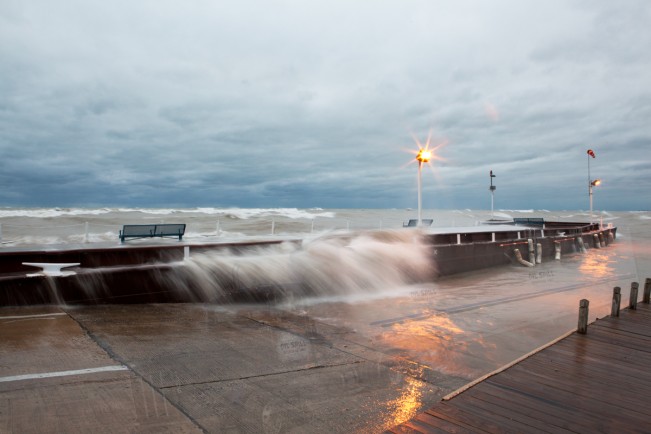 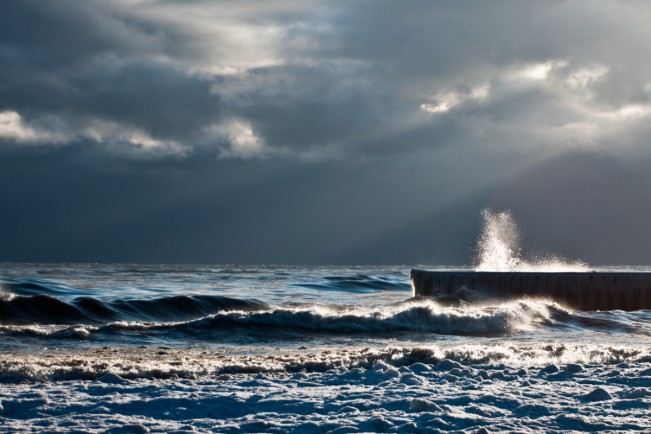 In Surface Tension, we explore these opposing realities.

Ted Glasoe’s poignant photographs of Lake Michigan invite us to contemplate and appreciate the lake’s power and its ever-changing moods, textures and colors. These are juxtaposed with Nelson Armour’s photographs of the lake, which have been altered to unsettle the viewer’s sense of beauty. These multilayered images reveal the unseen forces and traumas that threaten this magnificent natural resource.

Surface Tension confronts viewers with the reality that the world’s water is a finite precious resource, forcing them to reconcile its outward beauty with the dangers that lie beneath the surface. 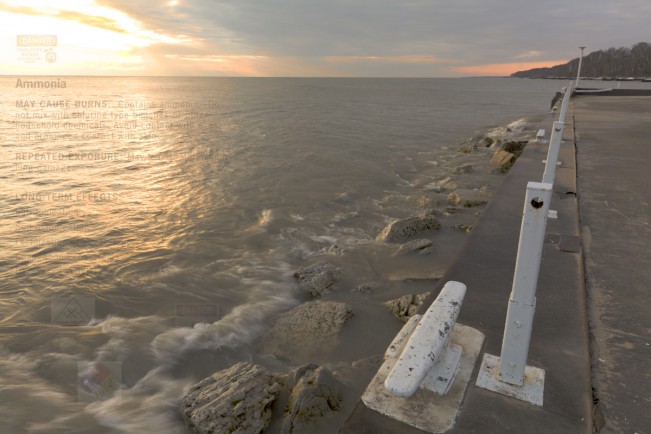 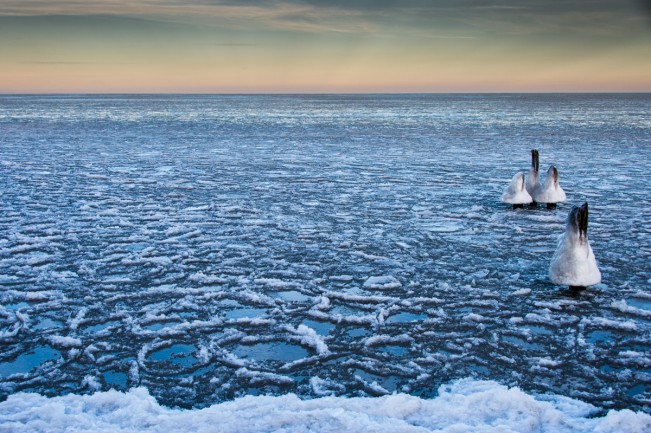 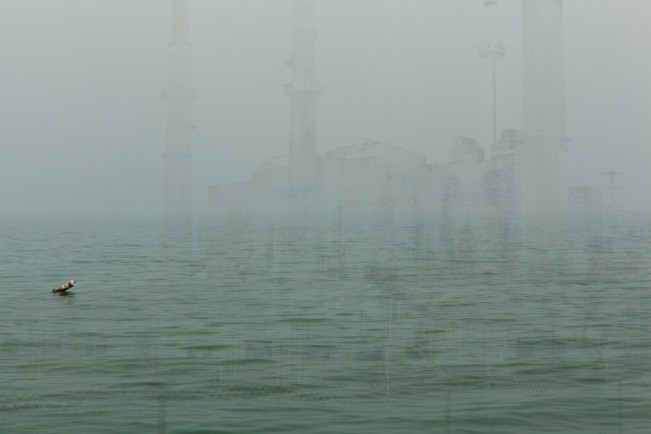 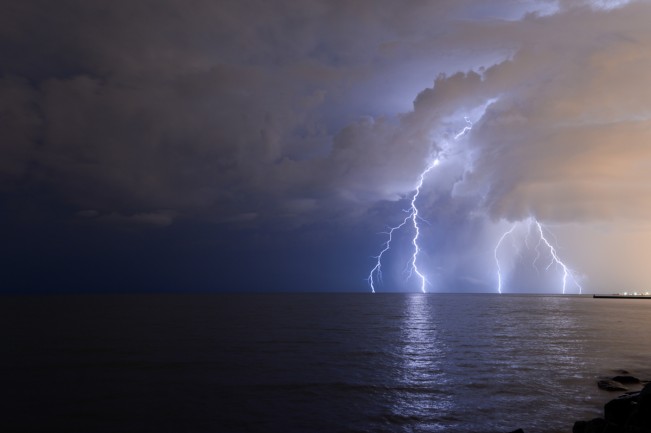 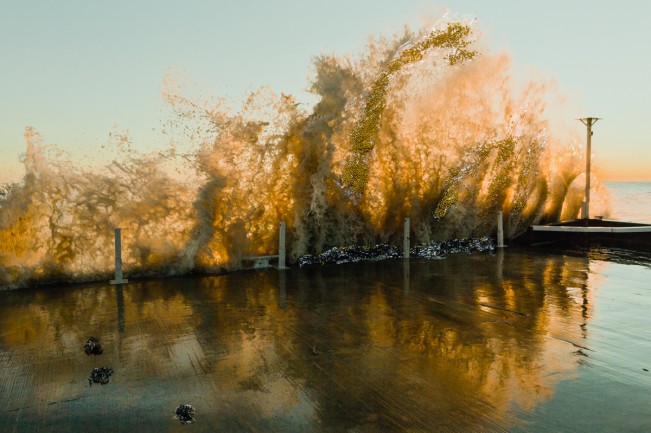 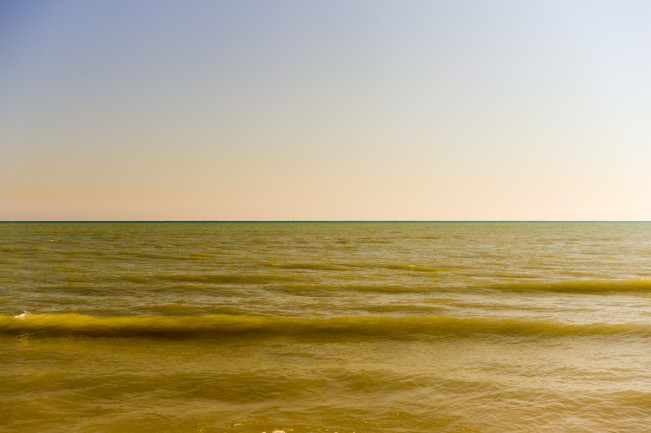 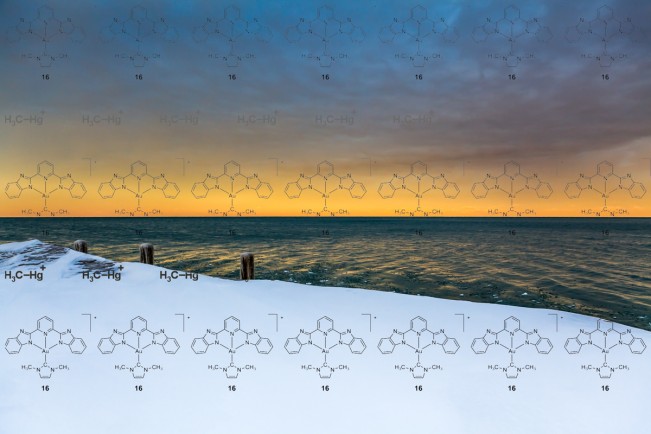 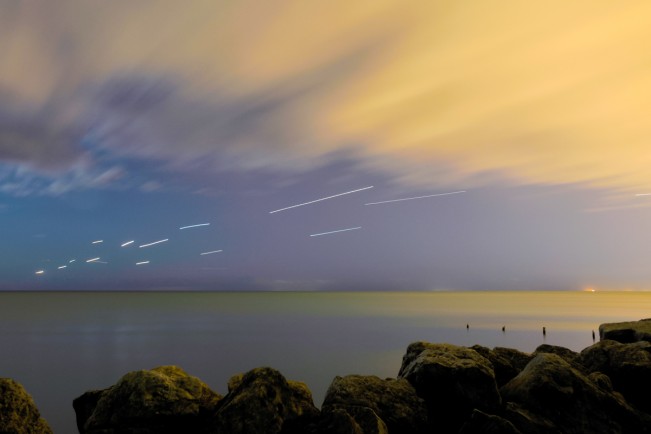 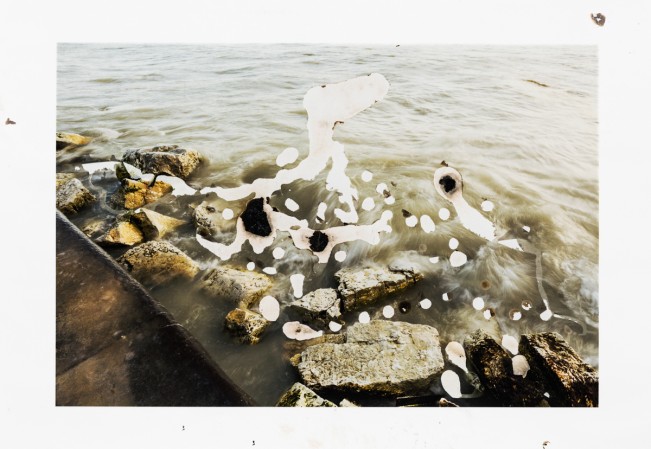 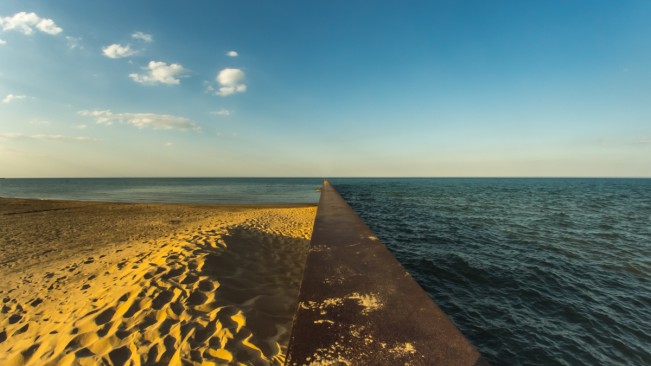 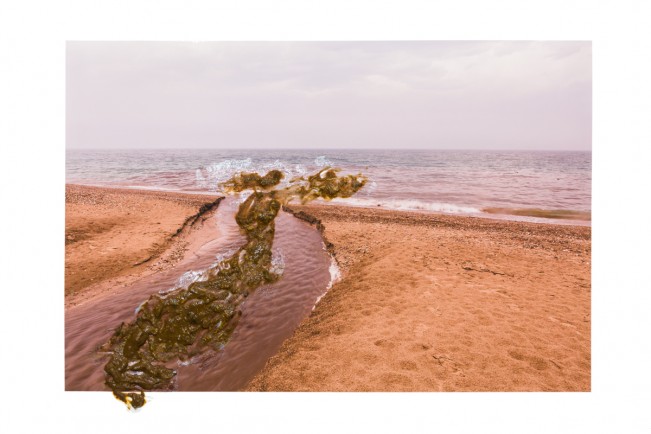 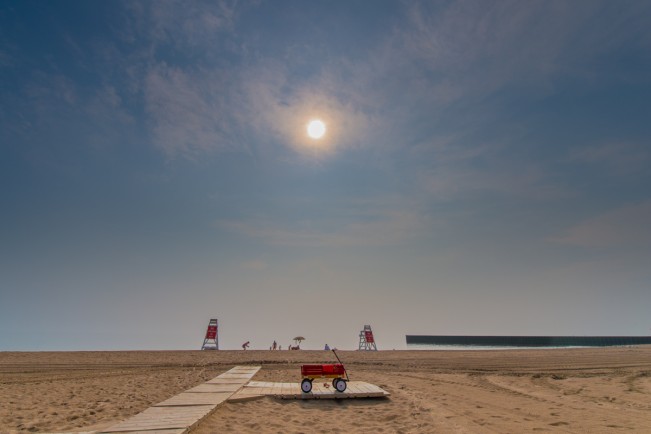