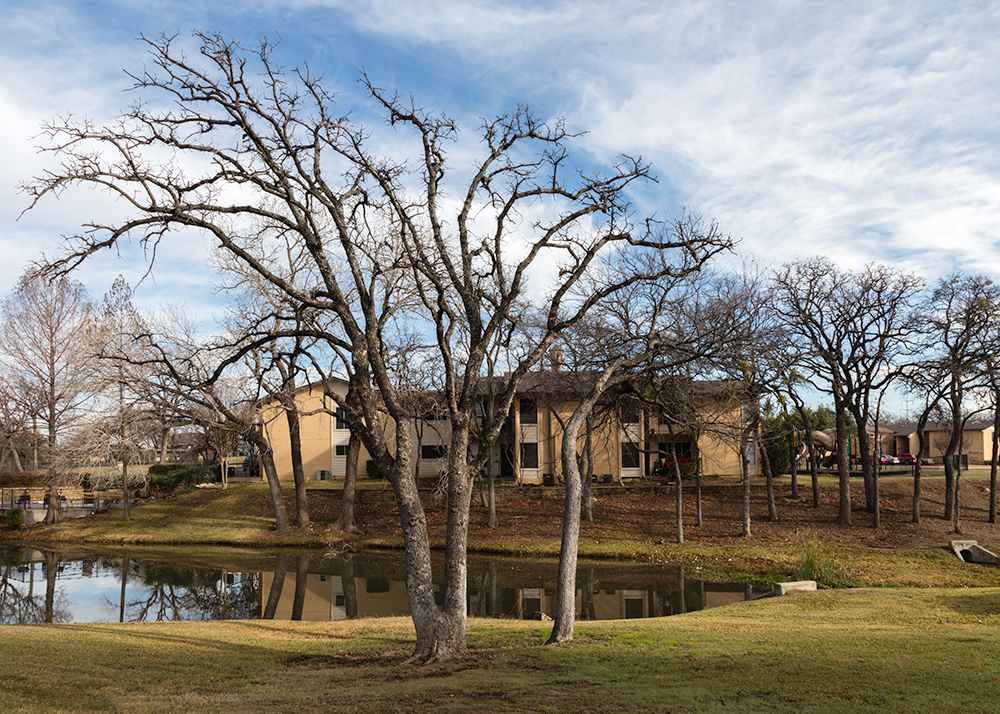 ©Jeanine Michna-Bales, Earthquake Epicenter: 2.3 magnitude at 7:37 am on January 6, 2015 Tower Village Apartments; Irving, Texas. One of seven earthquakes that occurred on the same day. 2016

Jeanine Michna-Bales is a photographer based in Dallas, Texas. Her series THE BARNETT SHALE: A FRACK-TURED LAND was awarded the PhotoNOLA Portfolio Review Prize in 2015. Through her work, Michna-Bales addresses socio-political issues of the past and present, exposing current vulnerabilities and shedding light on prior events whose pasts are out of sight yet not out of mind. Although Michna-Bales possesses a left-brained approach to communicating her message, employing well-organized facts and documentation, she also delivers her message with a keen visual sensibility.

The photographs from the series THE BARNETT SHALE: A FRACK-TURED LAND allow the viewer to become witness to an array of locations that are effected by hydraulic fracturing of the land, commonly referred to as “fracking.” Presented are recognizable landscapes, from rural backyards to freeways. Yet it’s in the detail of her use of light, shadow, movement and overall composition that helps present an inviting and simultaneously threatening sense of place, delivering these photographs firmly within the right-brained world.

Jeanine Michna-Bales’ (American, b. 1971) work explores the relationships between what has occurred or is occurring in a society, and how people have chosen to react to those events. Michna-Bales meticulously researches each topic—considering different viewpoints, causes and effects, and political climates—and often incorporates found or archival text and audio.

Whether exploring the darkened stations along the Underground Railroad, long-forgotten nuclear fallout shelters, or the invisible epicenters of environmental turmoil, her work seeks out places that are hidden in plain sight.

Images from her series about the Underground Railroad have appeared in group shows around the United States, including Moving Walls 23: Journeys (up through September 9, 2016, at Open Society Foundations in New York) and Southern Exposure: Portraits of a Changing Landscape at the Museum of Contemporary Art Jacksonville. Her work has been published in In Sight from The Washington Post, Harper’s Magazine, GEO Histoire, Harvard University’s Transition magazine, and WIRED Raw File. In 2014, she was named to the Photolucida Critical Mass Top 50. Her forthcoming book, Through Darkness to Light: Seeking Freedom on the Underground Railroad, will be released by Princeton Architectural Press in February 2017. 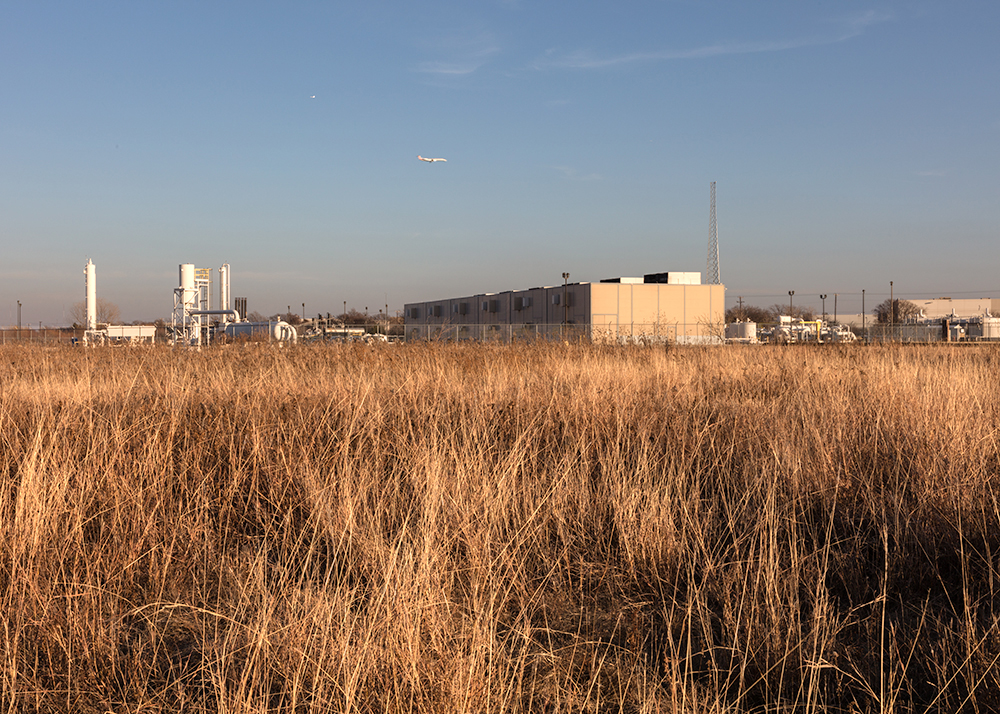 ©Jeanine Michna-Bales, Dallas-Ft. Worth Airport Northside Wastewater Injection Well. Just Over the Dallas County Line at TX 121 and I-635; Tarrant County; Irving, Texas. There are approximately 16 active and two inactive wastewater injection wells located within 50km of the Dallas and Irving area epicenters. To date, over 120 earthquakes, 1.5 magnitude or higher, in total.

THE BARNETT SHALE: A FRACK-TURED LAND

When we moved from San Francisco, California to Dallas, Texas 11 years ago, earthquakes were the last thing on our minds. Prior to a series of ten earthquakes in a 24-hour period the end of October in 2008, the Dallas-Ft. Worth area had virtually no earthquakes on record. Since then, the number of earthquakes and their magnitudes have been increasing at an alarming rate, with over 80 in 2015 at 1.5 magnitude or higher on the Richter Scale.

The Dallas-Ft. Worth Metroplex sits on top of The Barnett Shale Formation, encompassing 17 counties in Northeast Texas impacting a population of almost 6 million. It has been undergoing the aggressive process to release oil and natural gas called hydraulic fracturing, or ‘fracking,’ which scientists have linked to earthquakes; air and groundwater contamination; health issues in livestock and humans; and dangerous pipeline and well blowouts.

As a way of processing what I was learning, I started visually documenting the epicenters of each earthquake, as well as some of the other impacts of fracking on our area. Recent scientific studies have stated that wastewater injection wells can activate fault lines up to 50km (about 31 miles away) causing “induced” earthquakes. In addition, the United States Geological Survey (USGS) just released maps highlighting vulnerable areas to man-made earthquakes — suddenly 7 million people are living in quake zones where, historically, noticeable earthquakes were rare: Texas, Colorado, Arkansas, Kansas, New Mexico, Oklahoma, Ohio and Alabama. These areas have no seismic building codes or retrofitted infrastructure, making the areas ripe for a disaster.

Two percent of Texans hold mineral rights. Yet, the Texas State Legislature passed House Bill 40 in May, 2015 — effectively siding with the oil and gas companies against local citizens by overturning a fracking ban in Denton County. Texas has become the front lines in the war on fracking. Because shale formations lie quietly below most of the Earth’s surface, I believe this project is fast-becoming relevant to us all. 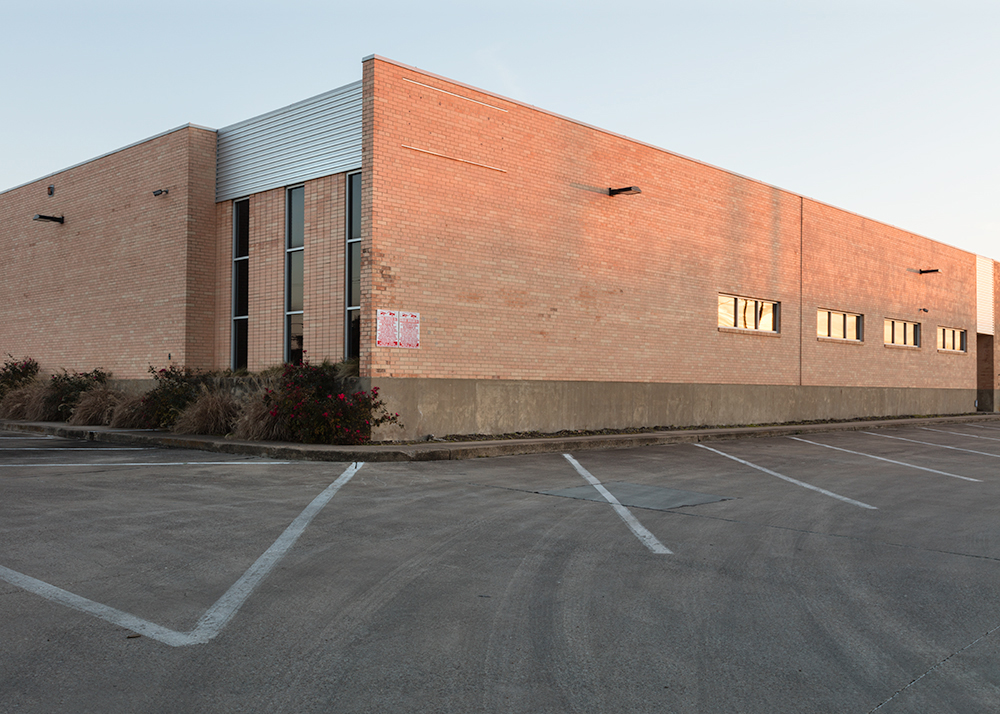 ©Jeanine Michna-Bales, Earthquake Epicenter: 2.4 magnitude at 7:46 pm on January 11, 2015. Just off of Ambassador Row; Dallas, Texas. One of 17 earthquakes that same week. 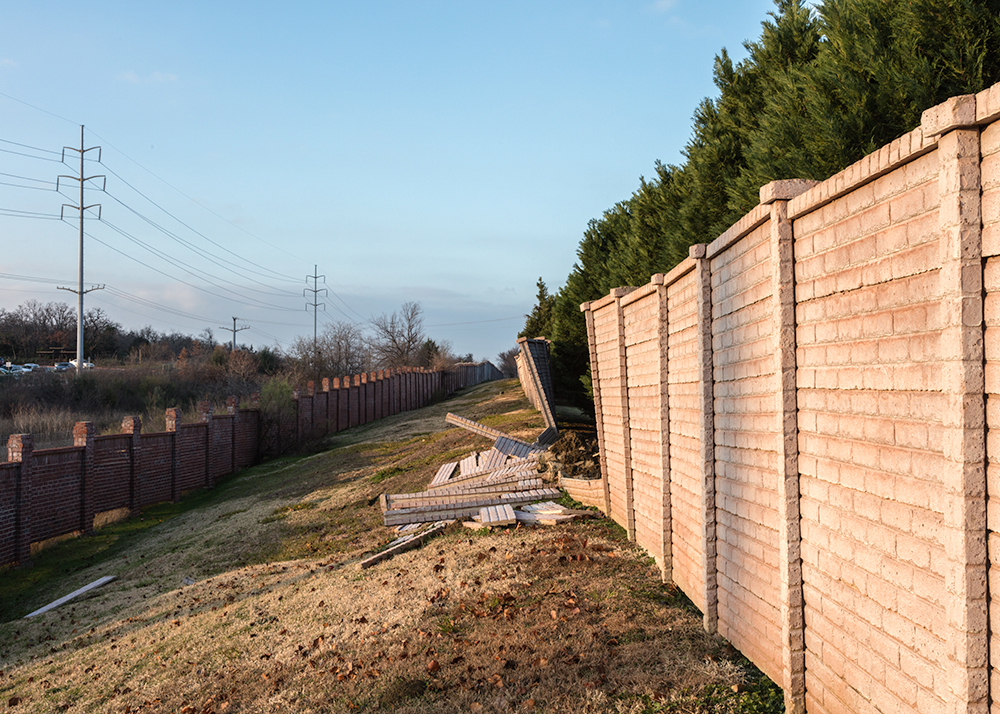 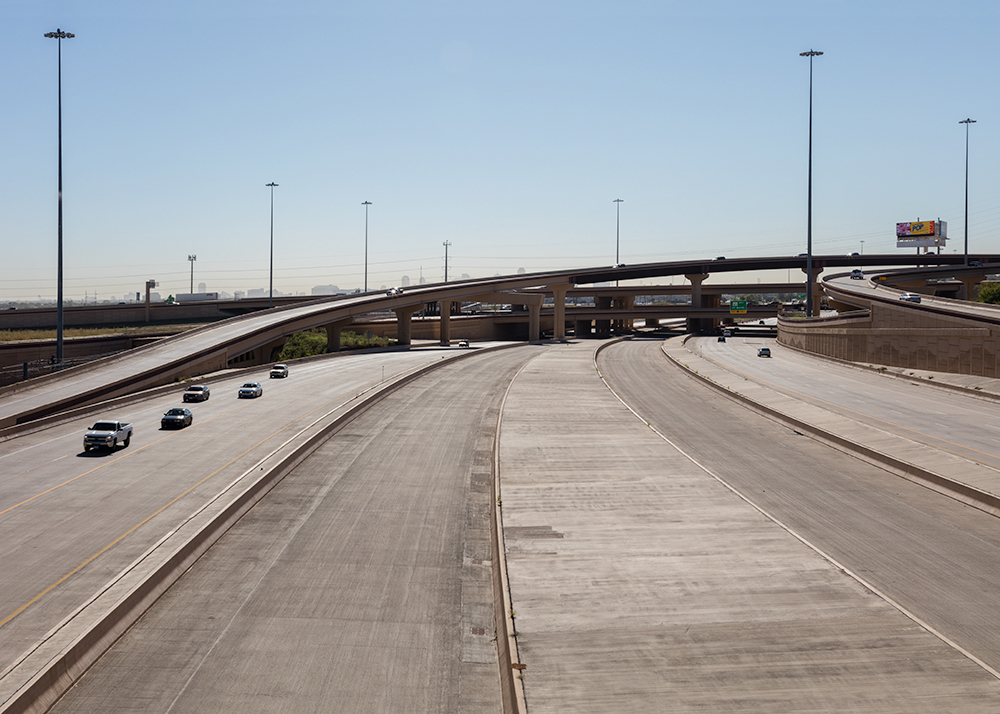 ©Jeanine Michna-Bales, Earthquake Epicenter: 2.6 magnitude at 10:30 am on July 18, 2015. Just North of the SR 114 and Loop 12 Interchange; Irving, Texas. Most buildings and infrastructure in Texas have not been built to withstand seismic activity. 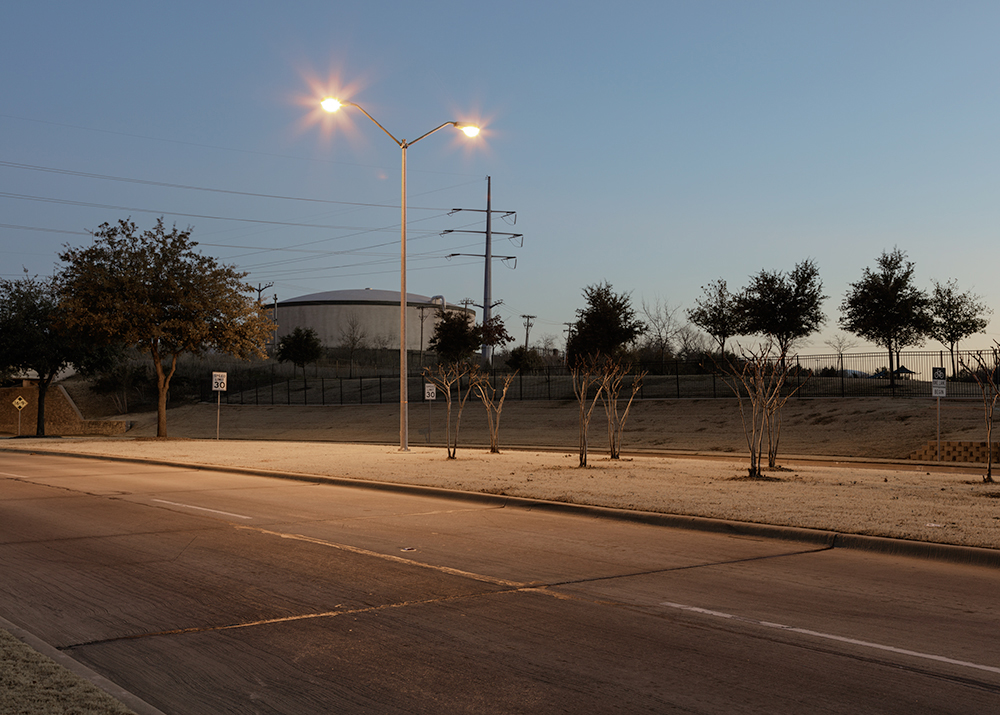 ©Jeanine Michna-Bales, ExxonMobil Pipeline Company Storage Tank One of 11 tanks that are part of the Facility with a 12-inch High Pressure Explorer Pipeline connected to it. Four epicenters are within about 600 to 1500 ft. of the facility and the pipeline, including one shown in the road. 2016 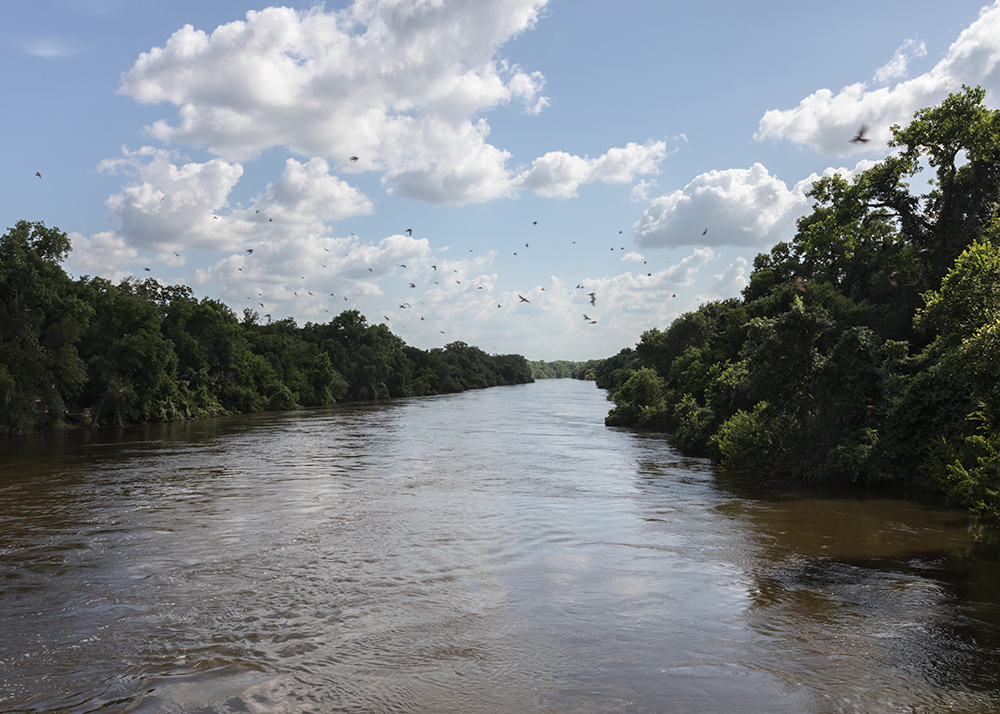 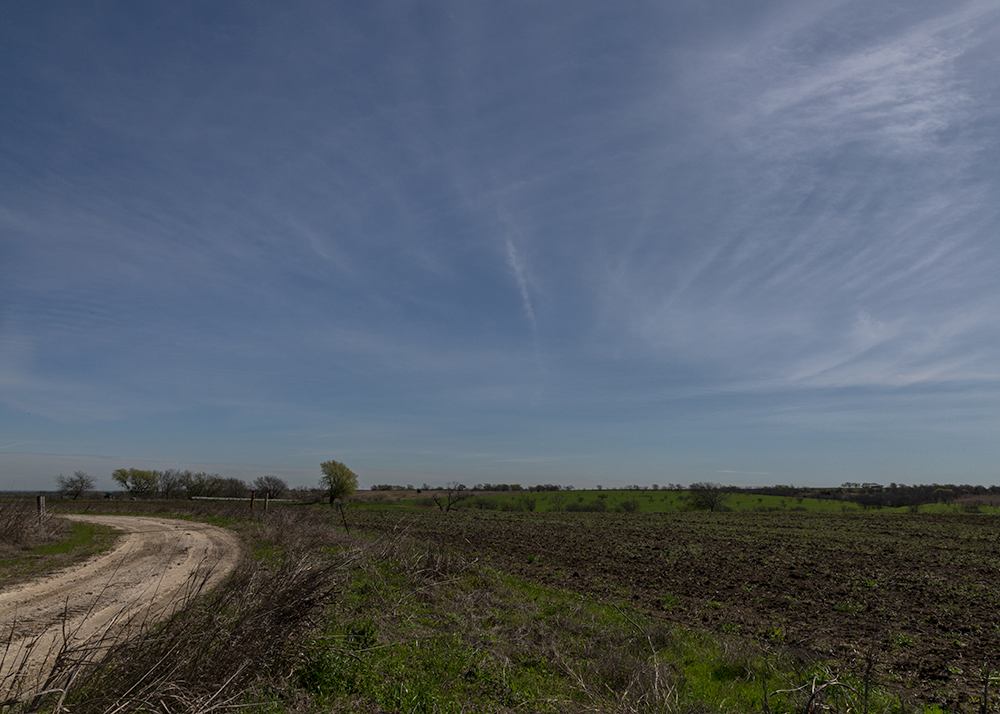 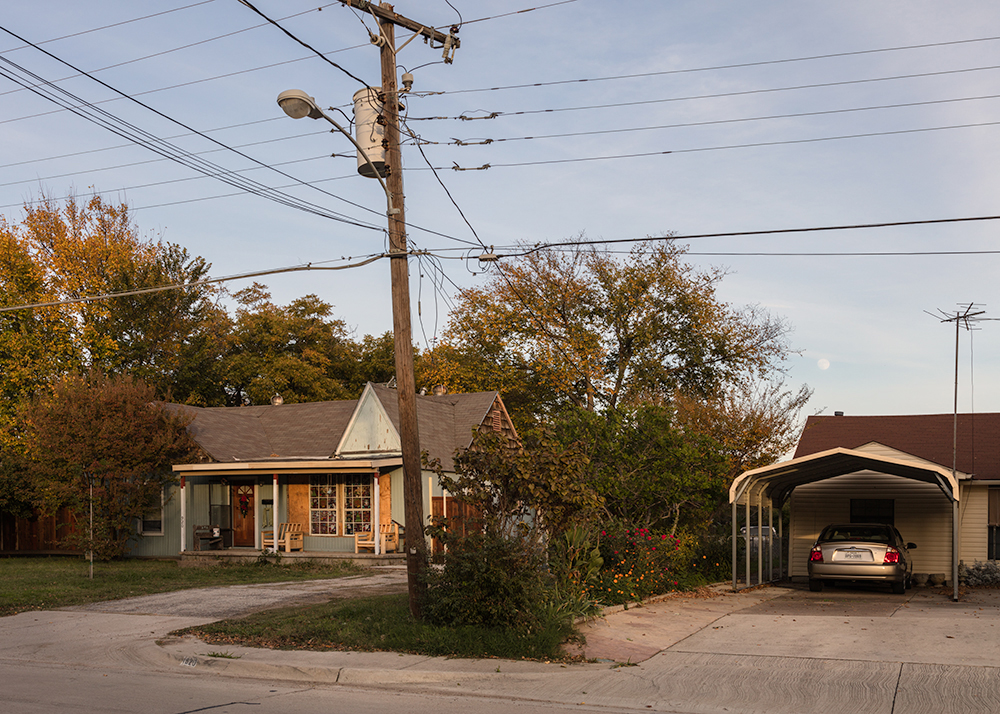 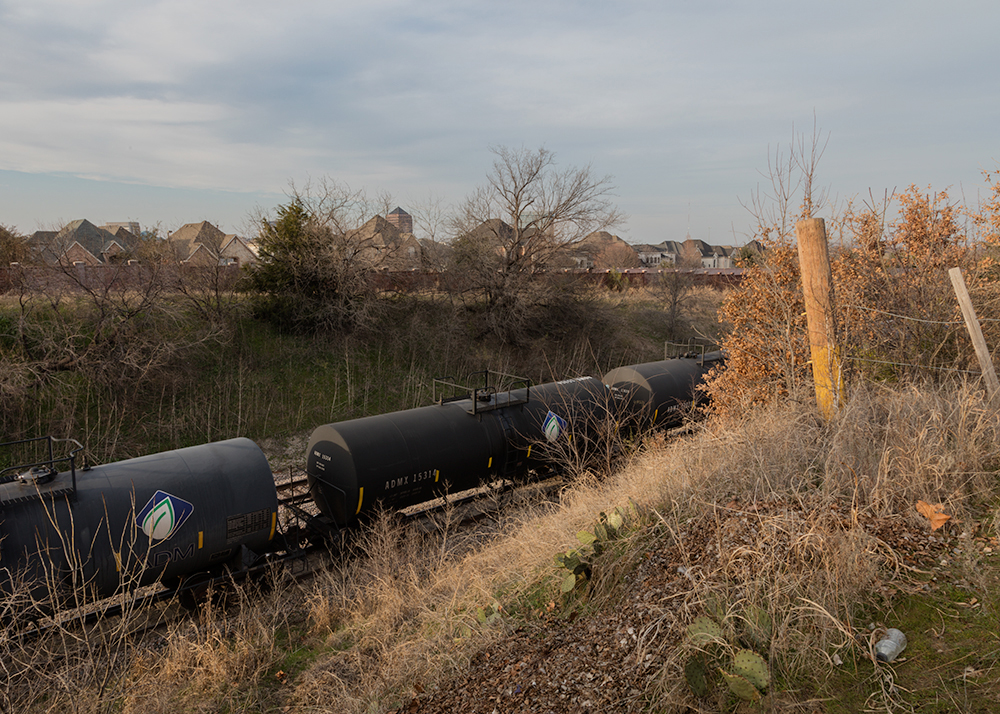 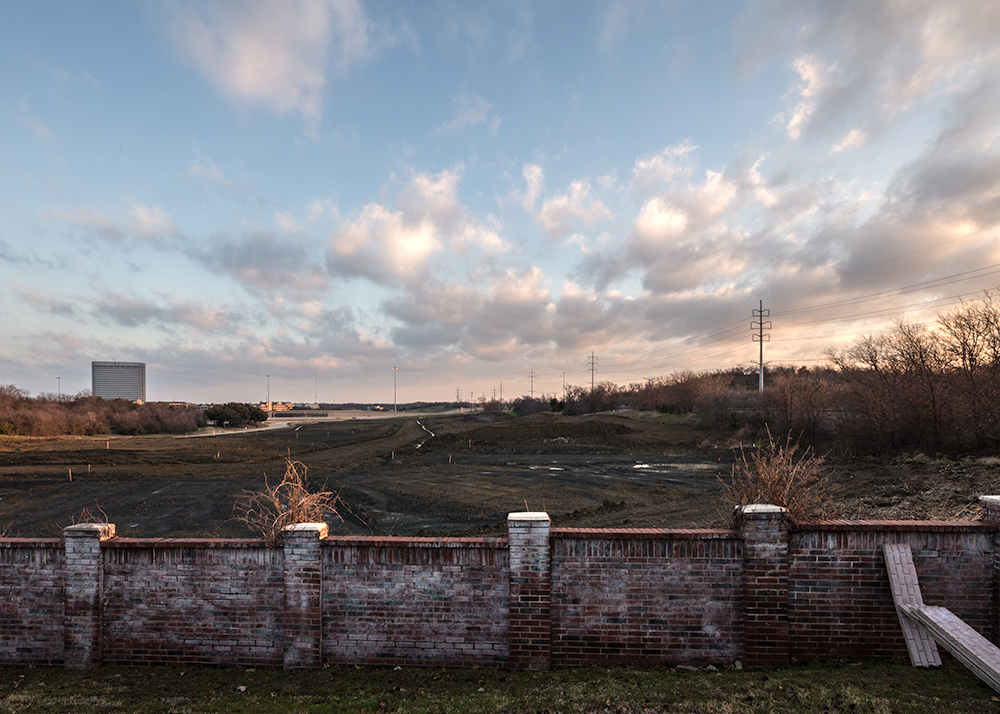 ©Jeanine Michna-Bales, New Housing Development Just Northwest of the University of Dallas; Irving, Texas; 2016 Around 100 earthquakes have occurred within the surrounding two miles. 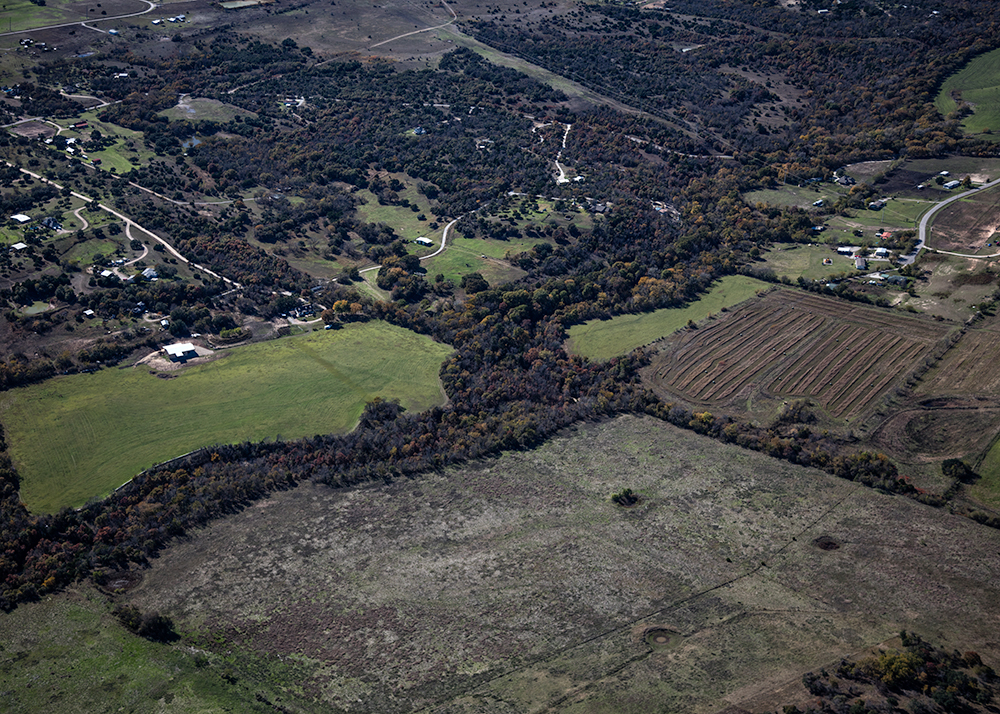 ©Jeanine Michna-Bales, More than 30 Earthquakes Occurred in the Fall of 2013 and Early Winter of 2014. The epicenters were in Azle, Texas and the surrounding towns about 17 miles northwest of Ft. Worth. Springtown, Texas; 2015. 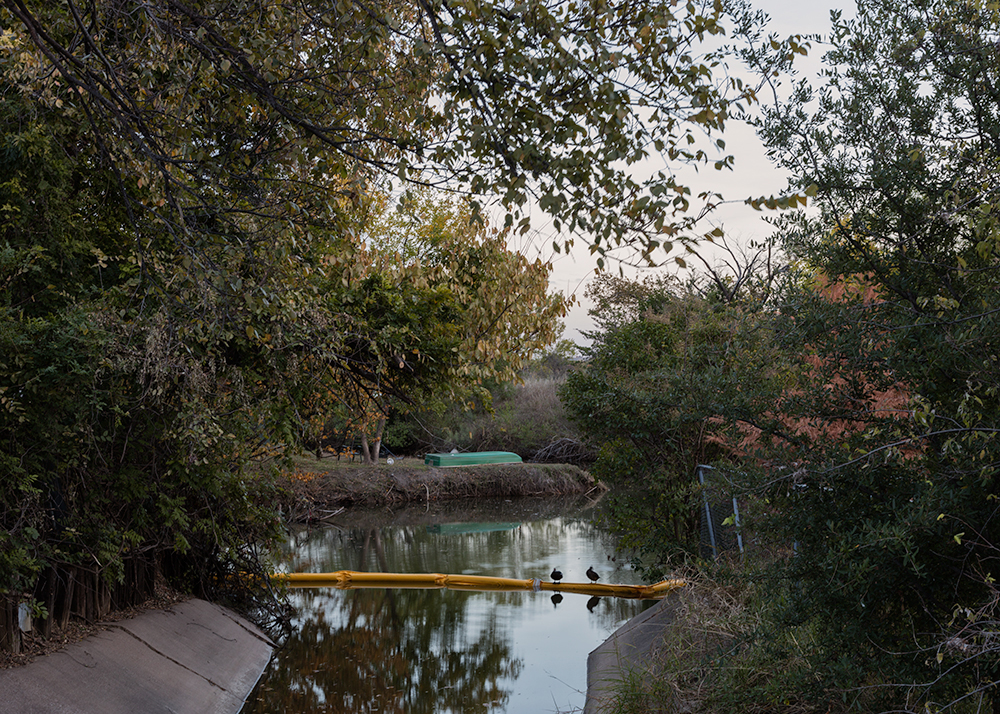 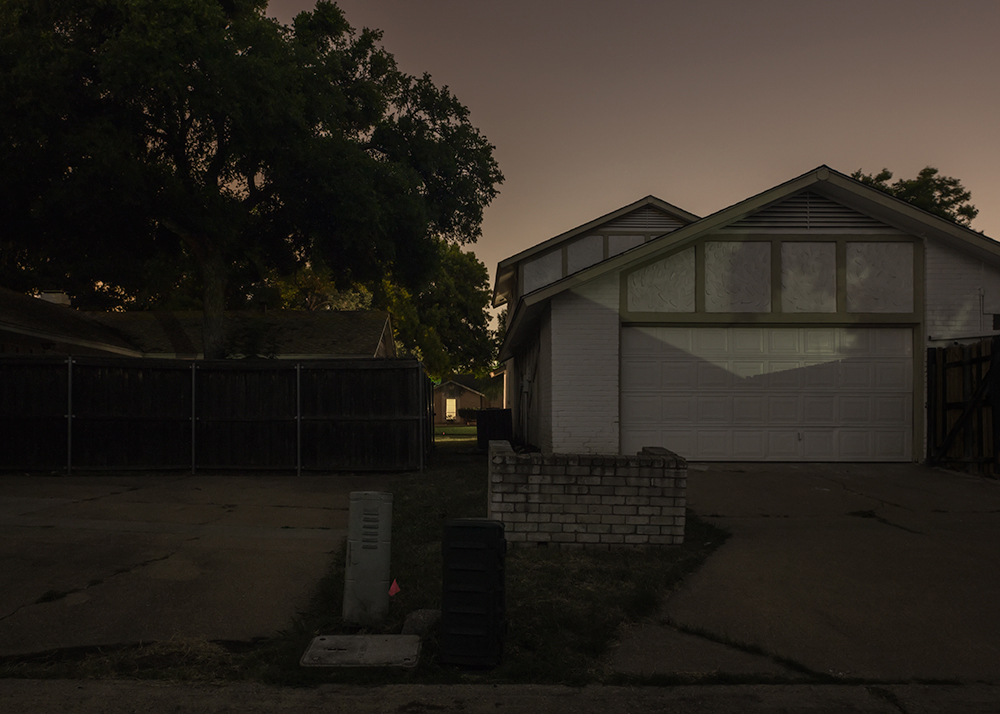 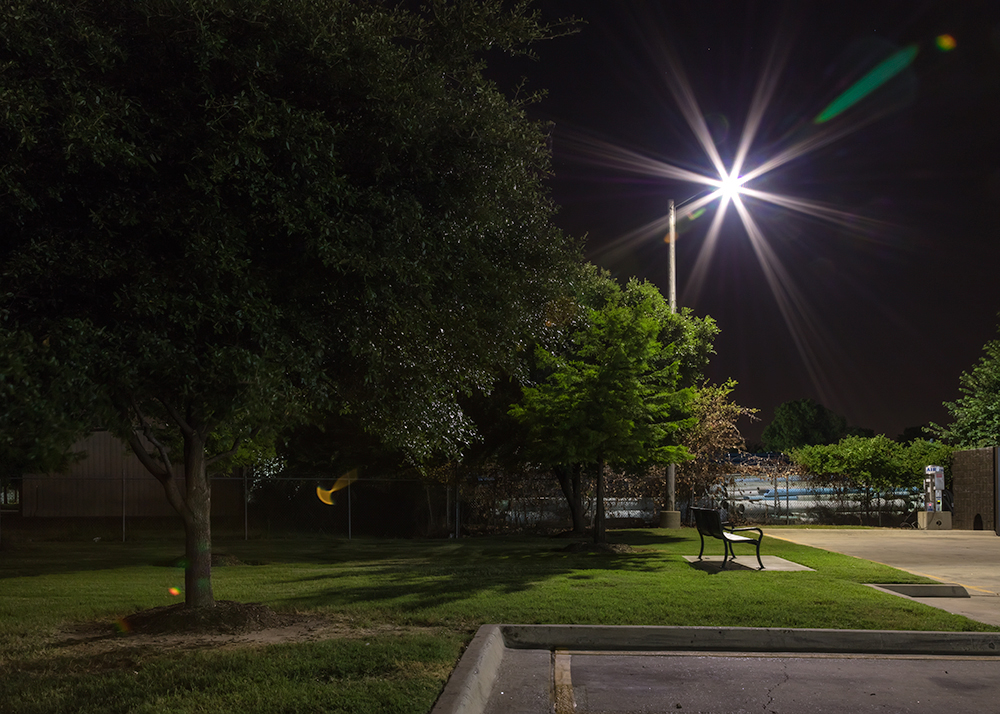 ©Jeanine Michna-Bales, Earthquake Epicenter: 2.7 magnitude at 5:38 am on April 2, 2015. Next to RaceTrac; W. Northwest Highway; Dallas, Texas. One of five earthquakes with a 24-hour period.