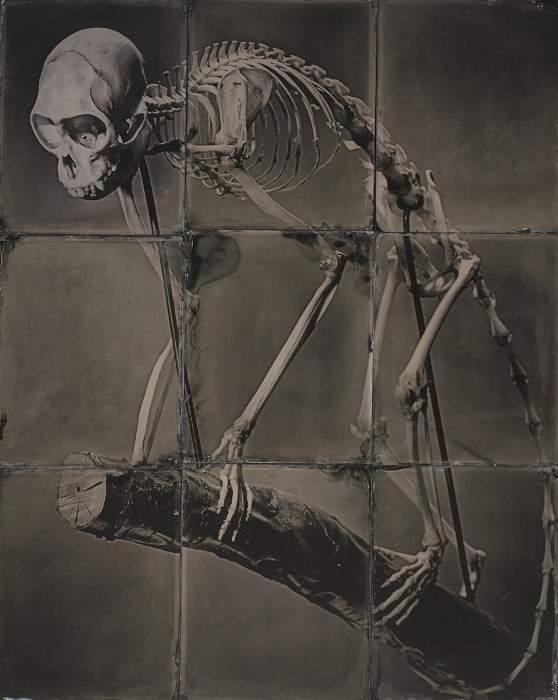 Artist, Mary Frey uses old photographic techniques as metaphor for aging taxidermy displays to explore natural history. As many museums face financial struggles, storage conditions for many of their specimens are lacking. Numerous small museums cannot maintain conditions that properly preserve scientific specimens. I see these images as a tribute to the ephemerality and fragility of these historic collections.

Mary Frey received her MFA in photography from Yale University in 1979 and subsequently taught photography at the Hartford Art School, retiring in the Spring of 2015.  Frey has received numerous awards for her work, most notably a Guggenheim Fellowship in 1984 and two photography fellowships from the National Endowment for the Arts in 1980 and 1992. She was the recipient of a Te Foundation Fellowship in 2004 and an artists grant from the John Anson Kittredge Fund in 2010. During the 1994-95 academic year Mary Frey was the Harnish Visiting Artist at Smith College, Northampton, MA and in the spring of 2001 she completed an artist’s residency at the Burren College of Art, County Clare, Ireland.  Her work has been exhibited extensively and is part of many public and private collections, including the Museum of Modern Art, New York, the Museum of Fine Arts, Houston, the Chicago Art Institute and the International Polaroid Collection. Much of Frey’s work addresses the nature of the documentary image in contemporary culture and most recently she has worked with 19th century photographic processes to produce ambrotypes and lithophanes. A book of her early images, titled Reading Raymond Carver, was published by Peperoni Books in 2017 and is on the Paris Photo-Aperture Foundation’s shortlist for First PhotoBook for that year. 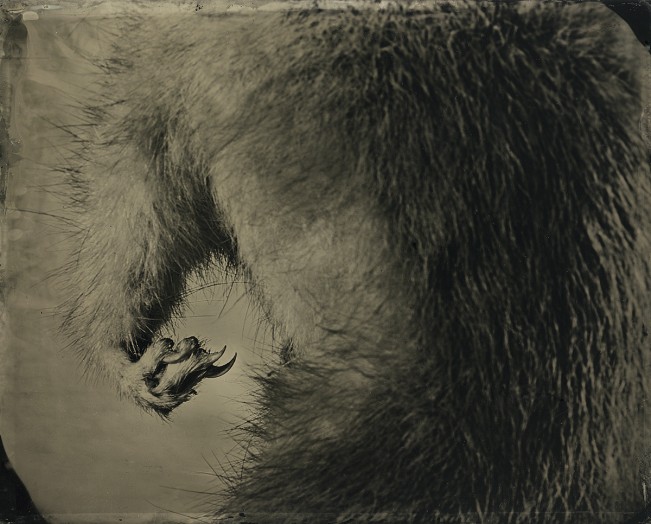 Photography invites us to pay attention.  It describes with economy, precision and detail.  It enables us to stare, scrutinize, and become voyeurs.  Taxidermy allows us to do the same.  Its complete replication of an animal’s stance, gesture and look provides us a way to study and comprehend its existence. Yet I find that these animals, often portrayed in suspended animation, seem simultaneously strange, ghostly and beautiful.  Their gaze is both familiar and unknown. I intend this work to move beyond what is merely seen to the territory of the imagination, where what is remembered and known is transformed into something new. 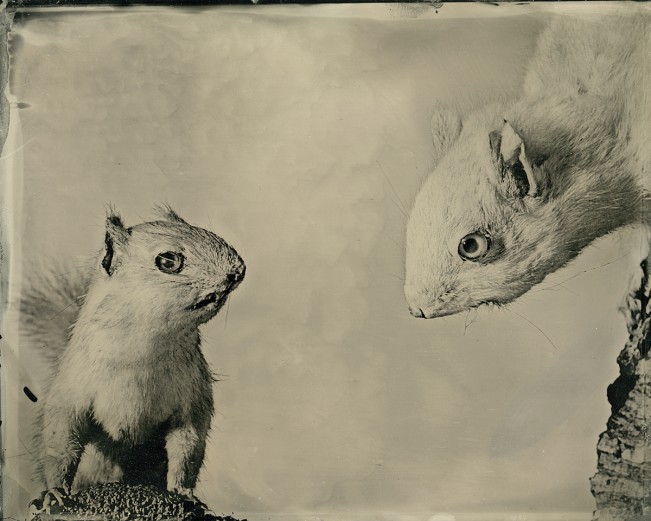 Notes on my use of the ambrotype process:

Aging biological collections housed in science museums worldwide are facing a dilemma.  Many specimens are deteriorating due, not only to the ravages of time wrought by display and storage, but also from the tactics employed to preserve these specimens in the first place.  The fragility of an ambrotype’s glass substrate, coupled with the vagaries of this nineteenth-century printing process, appears to echo this visible evidence.  The resultant objects seem an apt metaphor for our contemporary world, as nature and civilization struggle to find their proper balance for survival. 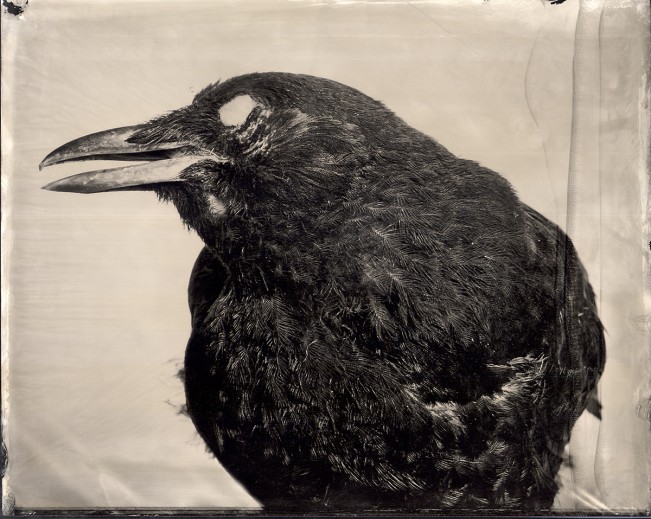 An ambrotype is a photographic image on blackened glass. It is created using the wet plate collodion process, which was popular in the mid nineteenth century. A glass plate is coated with collodion, sensitized in a silver nitrate bath and, while still wet, exposed in camera.  The image is then developed and fixed on the glass.  When backed with black, it appears positive and a final coat of varnish is applied to protect it.

I have created these images utilizing this wet plate process in conjunction with 21st century technologies.  I mixed my chemistry as the early practitioners did, employing all their application techniques and procedures. However, I shot the original photographs with a digital camera.  I then converted these digital files to 4×5, black & white transparencies and exposed them in an enlarger onto black glass. 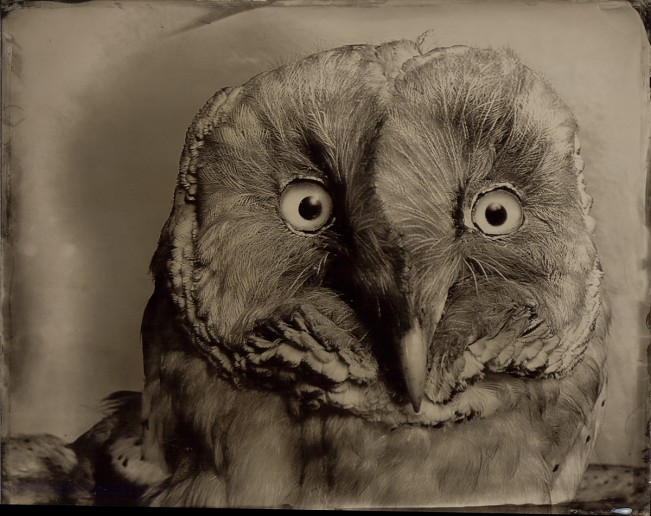 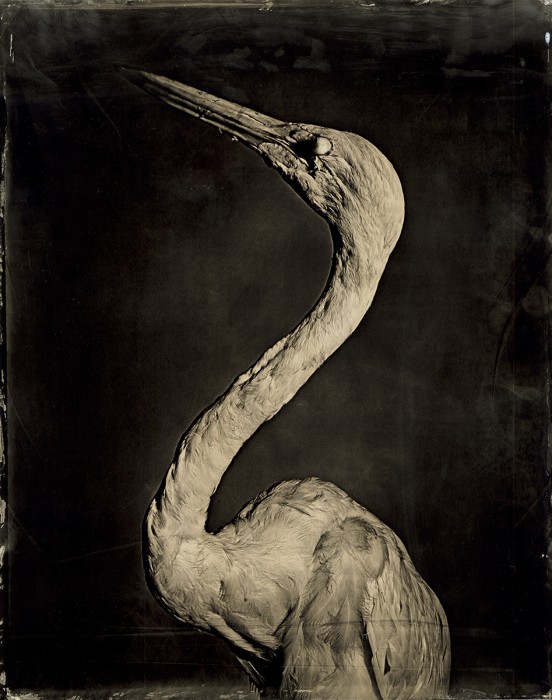 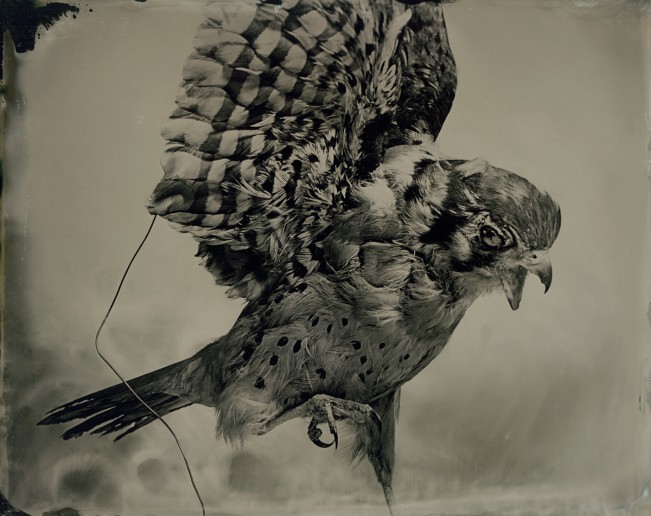 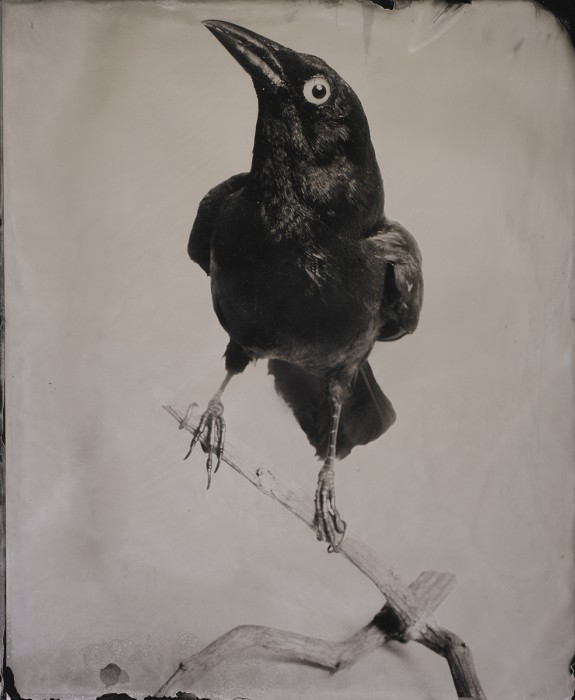 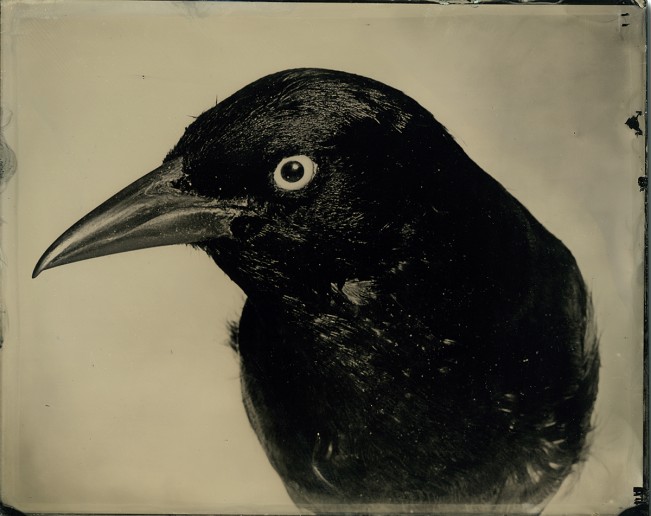 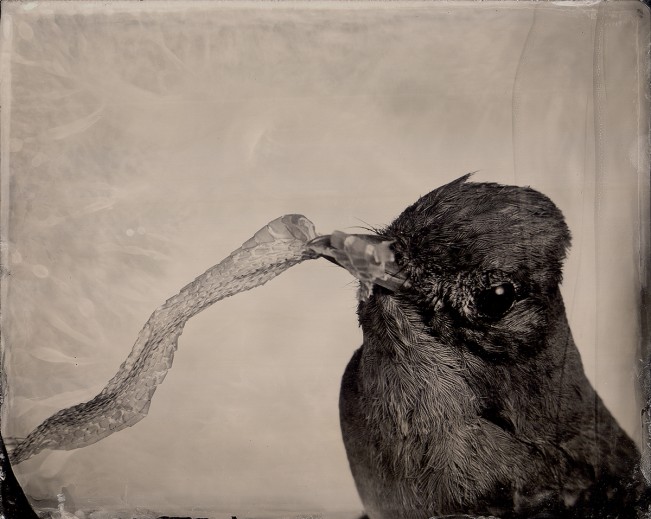 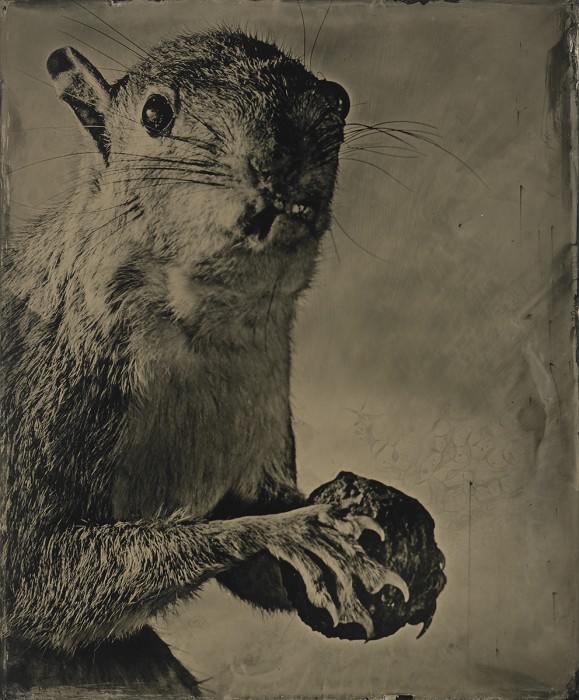 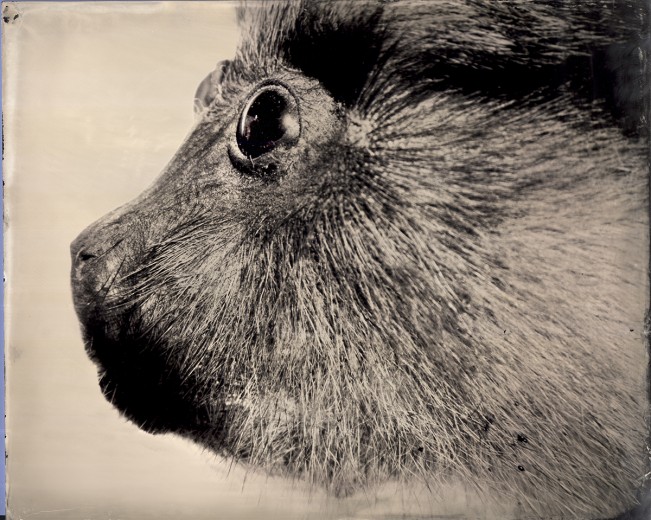 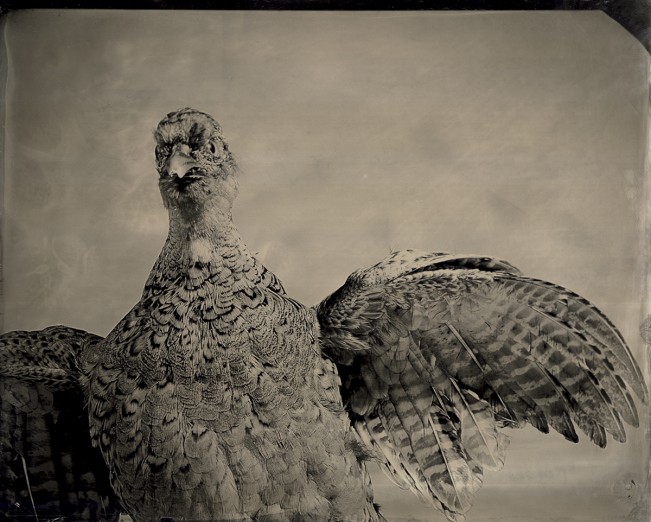 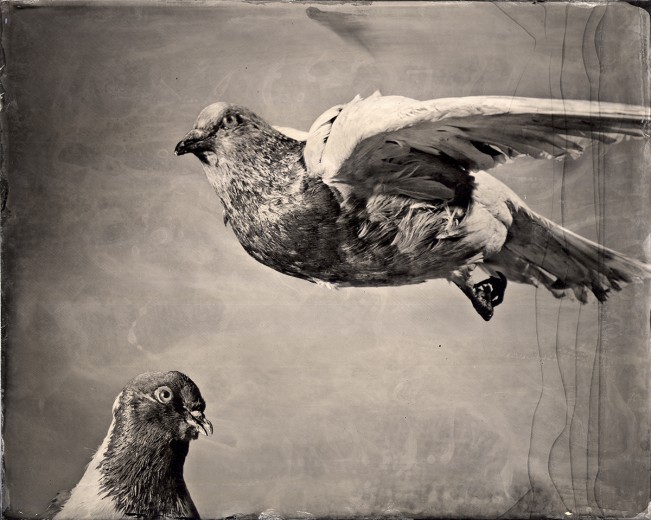 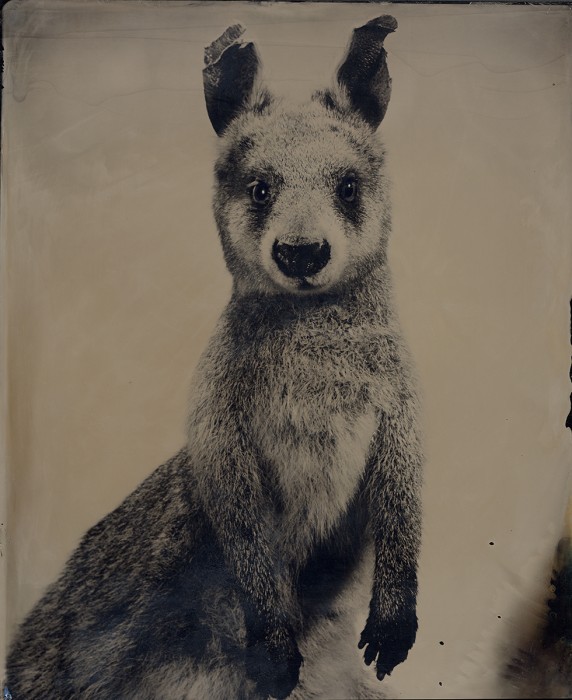 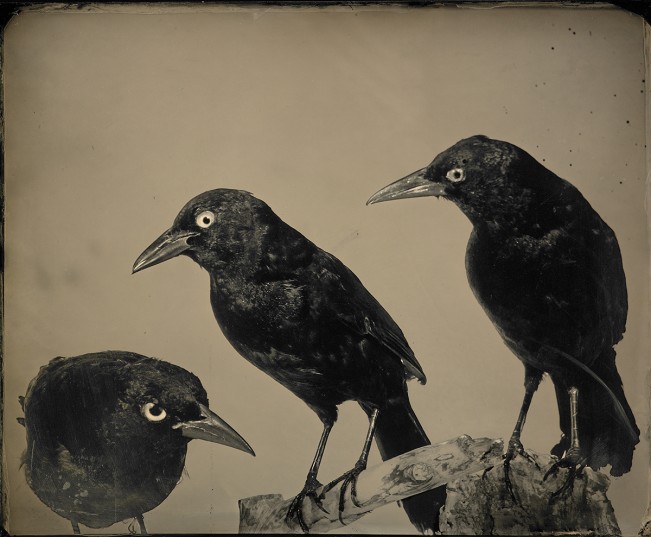 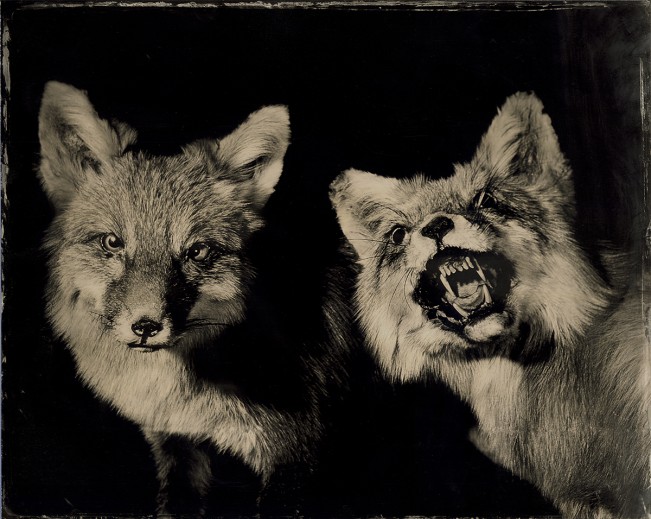 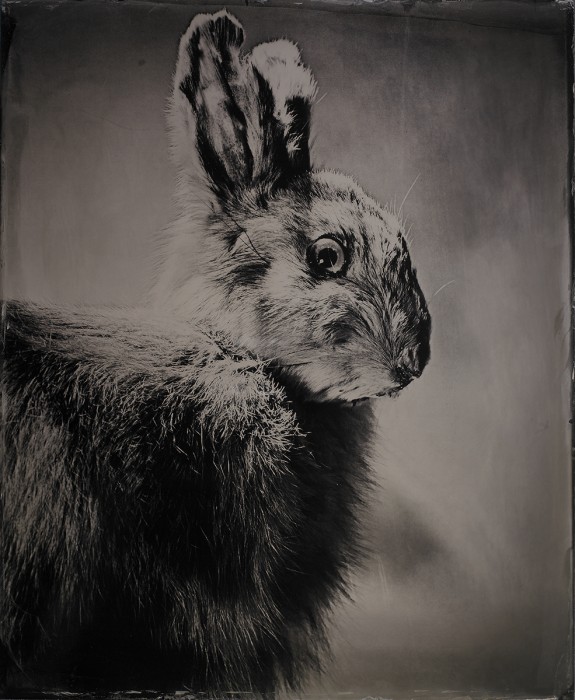 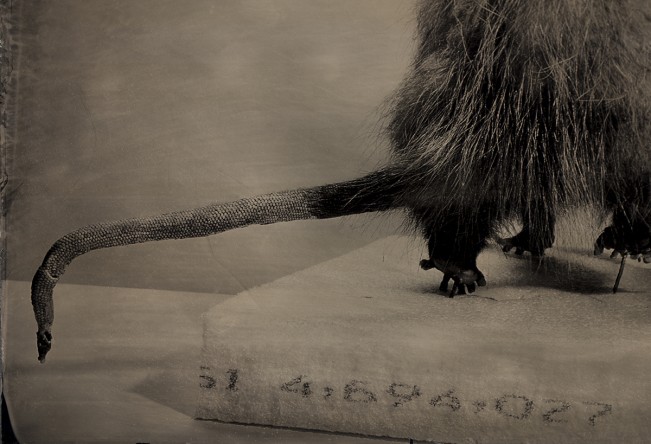