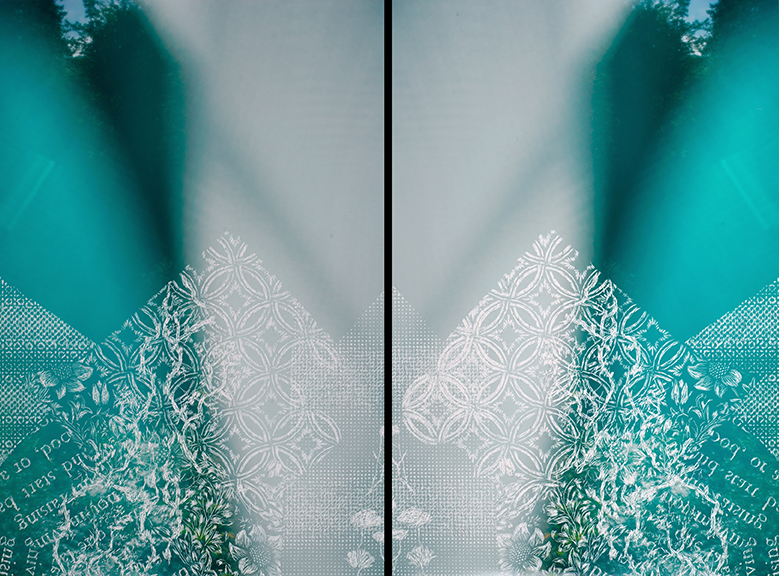 “Aiming his camera skyward, Russell photographs into the network of tree branches overhead. The light
flash shatters nature’s sheltering canopy with visual overtones of apocalypse. Next he folds, spindles and
otherwise mutilates the pictures, then spray-paints blasts of white and scratches into the photographic
surface (and sometimes the framing glass) with a blade. Sailing ships sink, wolves pace, jungle cats
attack and flocks of birds scatter. Floral patterns proliferate like animated Victorian wallpaper. Nostalgia
for the past bubbles with hints of determined regeneration in the future.”— Christopher Knight, Los Angeles Times

Two new exhibitions have opened in Los Angeles that are incredibly exciting and innovative, both feature artists working with photography in new, tactile approaches, where the artist intervenes with the surface of the photograph in a significant way. The Von Lintel Gallery in Los Angeles is featuring two solo exhibitions running through April 21, 2018: Christopher Russell, The Explorers and Christiane Feser, New Work, both which coincide with The J. Paul Getty Museum exhibition, Cut! Paper Play in Contemporary Photography, which also features the work of  Christopher Russell and Christiane Feser, in addition to Thomas Demand, Daniel Gordon, Soo Kim, and Matt Lipps.

I had the great pleasure of visiting the Von Lintel Gallery last week and was mesmerized by the Christopher Russell’s scratched surfaces on photographs captured in the Columbia River Gorge (where Carleton Watkins photographed the West with pristine vistas characteristic of the 19th century Romantic period). These ambiguous vistas and landscapes were created by manipulating the light before it enters the lens, producing color saturated surfaces that speak to light, shadow, nature, and place. Christopher then further manipulates the surface through etching directly into the emulsion of the print. The digital images featured today only hint at the elegance and magic of his art work–each are delicate expressions of gesture, with precise cuts reminiscent of intricate lace, text, or pattern. The raised surfaces form new illusionistic spaces that reference Carleton Watkins’ West, transforming these 0ne-of-a-kind constructions into transcendent experiences. 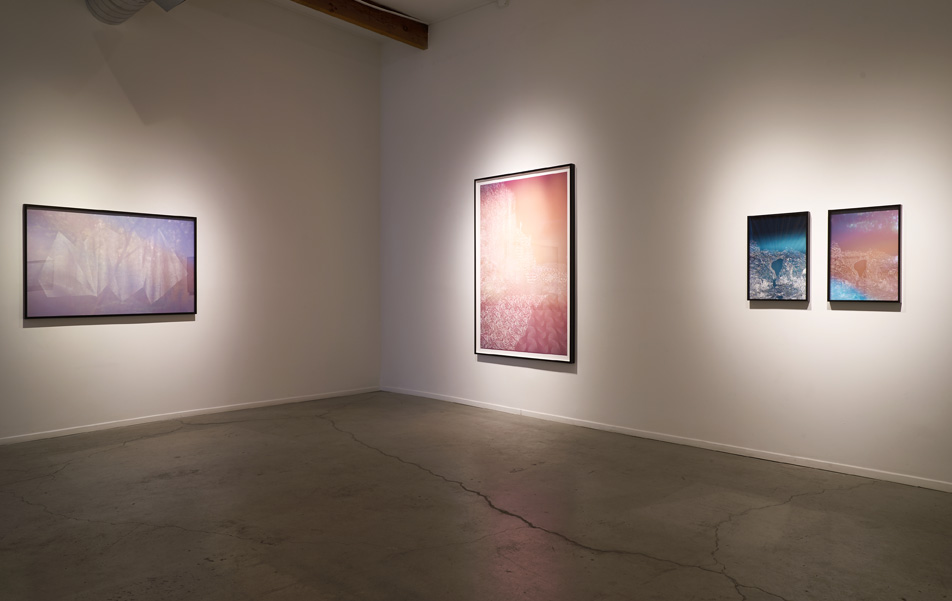 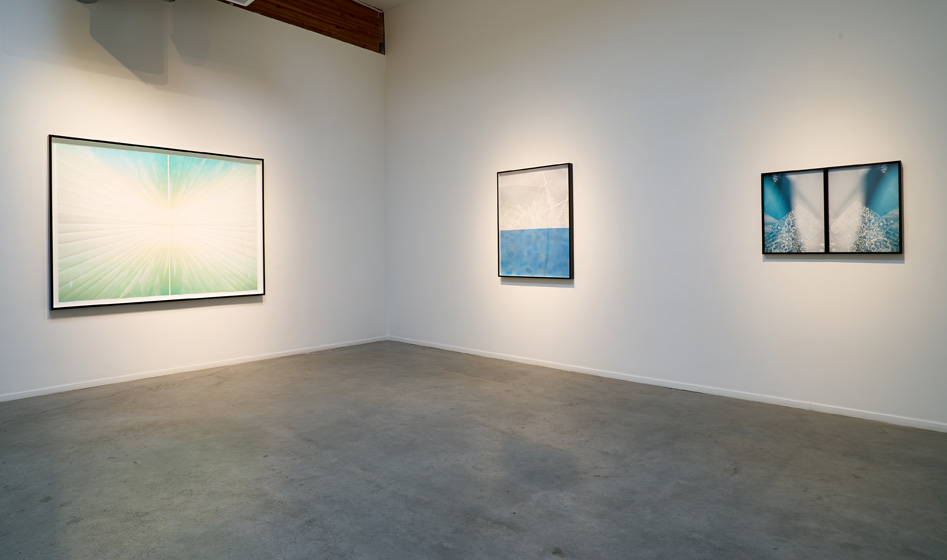 Christopher Russell received his BFA from The California College of Arts and Crafts, and his MFA from the Art Center College of Design. He has presented a solo exhibition at the Hammer Museum in Los Angeles. He has been featured in group exhibitions at the Tokyo Institute of Photography, The Norton Museum, Armory Center for the Arts, White Columns, De Appel Arts Center (Netherlands,) Berkeley Art Museum Museum, Los Angeles County Museum of Art and the J.P. Getty Museum, among others. He has published numerous critical articles in Artillery Magazine and Art US, in addition to being a featured subject of positive review by the Los Angeles Times, New York Times, Huffington Post, Artillery, Frieze, and ArtForum, among others. Russell also produces his own unique books in addition to his ‘zine Bedwetter. His first novel is Sniper, and other books include Budget Decadence (2nd Cannons Publications), Pattern Book (Insert Blanc Press) and Landscape (Kolapsomal Press) which was included in Phaidon’s The Photobook: A History Vol 3 edited by Martin Parr. His work is included in over two dozen museum collections including the Brooklyn Museum, J.P. Getty Museum, Museum of Contemporary Art, Antwerp, Museum of Contemporary Art, Los Angeles, Museum of Contemporary Art, San Diego, Los Angeles County Museum, Rhode Island School of Design Museum, Hammer Museum, Museum of Fine Arts, Houston, the Tokyo Metropolitan Museum of Photography. 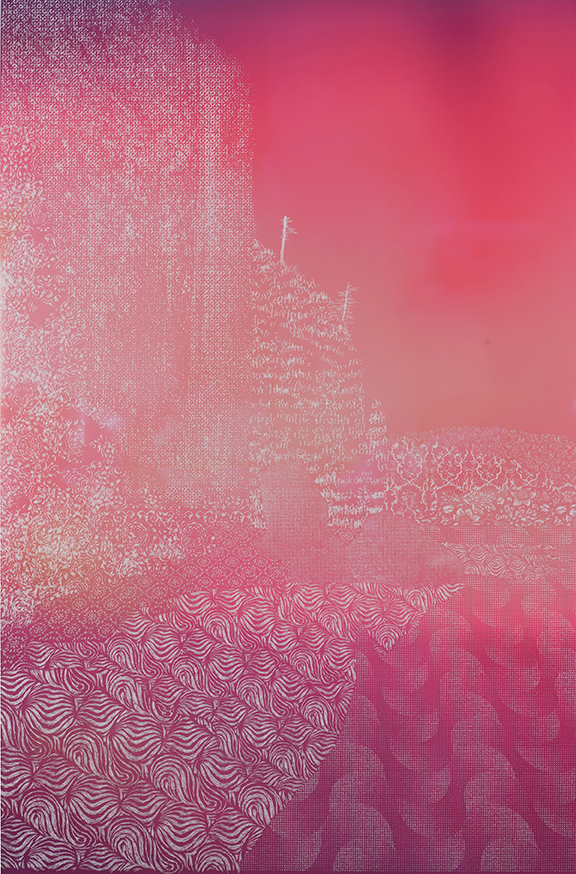 European cartographers would once place drawings of monsters onto uncharted areas of their maps. It was a code to sailors that they were moving into an unknown area, and to proceed with caution. But these maps served a secondary role, to elucidate the world of discovery for people who would never be able to travel the seas. These maps offered a way of negotiating a new body of scientific knowledge while maintaining a grasp on primitive fears.

By the time Carleton Watkins photographed the west, the edges of the continent had long been known, and were generally understood to be monster-free. But what Watkins provided was evidence. His images of the new west laid to rest the drama of the gothic imagination and replaced it with the scientific certainty of pristine vistas. He used then-new technology to satisfy lingering questions about what the new world might hold. And while his project was compelled by Romantic wonder, it was also its last gasp, as the scrutiny of the photographic lens seemed, at least for a moment to offer answers. This is one way of understanding the twining of fact and wonder, the specificity of the lens and the evocations of the mind, that has made photography such an enduring medium. 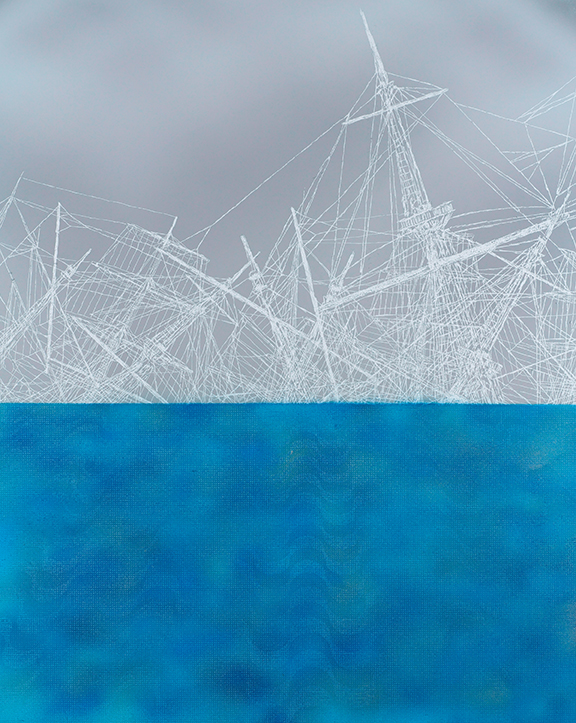 And for me, that’s where materiality fits in, as a challenge to illusionism of the photographic medium. When I photograph in the Columbia Gorge, the same area that held Watkins attention 160 years prior. I fuck up the image before the light even hits the lens, resulting in images that are fuzzy, hazy, or just intellectually negotiable. I use that ambiguity as a starting point for my own imaginary vistas. For this exhibition, I’ve mixed interpretations of Watkins images with increasingly abstract approaches to the genre of landscape. Over the last 15 years, I’ve collected a number of gestures that deal with the the photographic medium and its material form. Most commonly I scratch into the emulsion of the print. I also scratch into the glazing, the resulting marks throw shadows onto the print, a type of drawing that appears more or less focused depending on the quality of the lighting. I also paint over the scratches, creating an artwork that is at once a photograph, a painting and bas-relief. I also fold the photographic print which creates a slight dimensionality, allowing shadow and glare to shift across the surface creating a malleable viewing experience that changes with the angle of view. And these are explorations, given the breadth of knowledge facing an artist in the 21st century, this is a was of asking what’s more. What is there to satisfy curiosity that can’t be found on Google Maps? – Christopher Russell 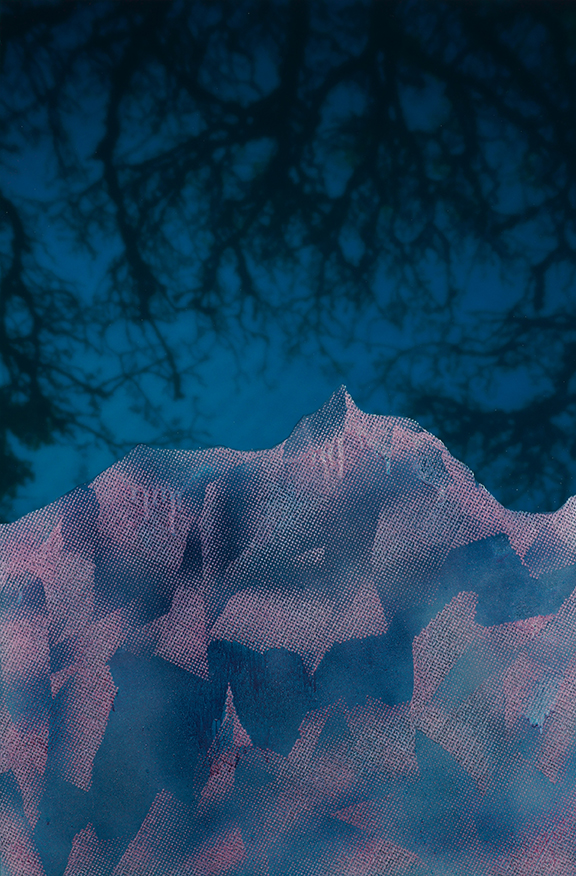 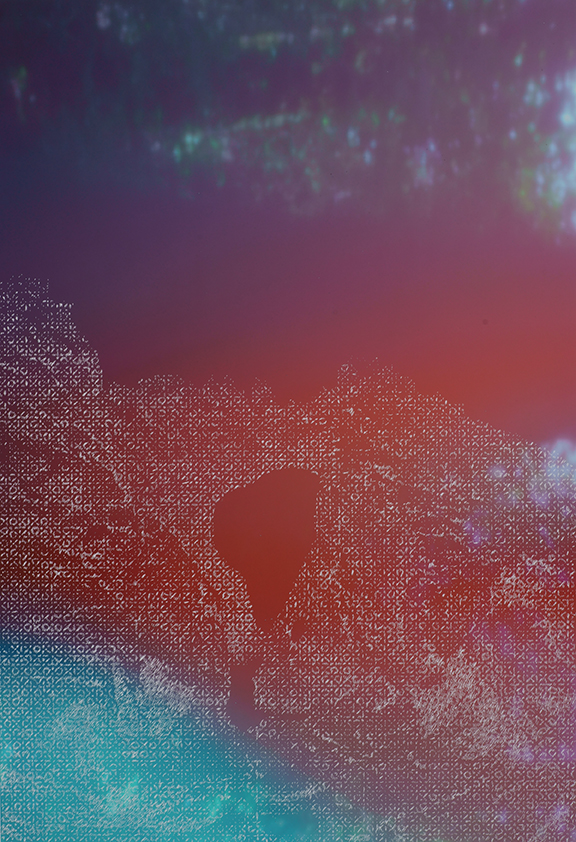 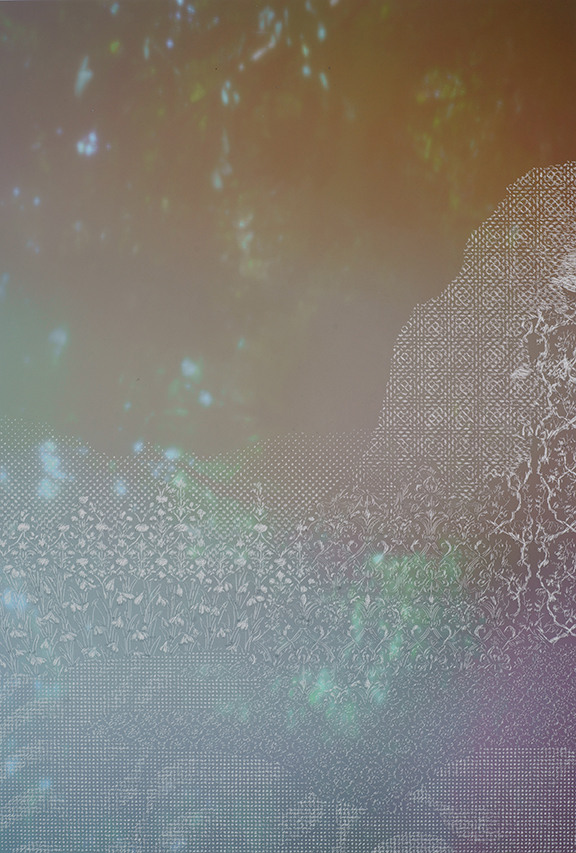 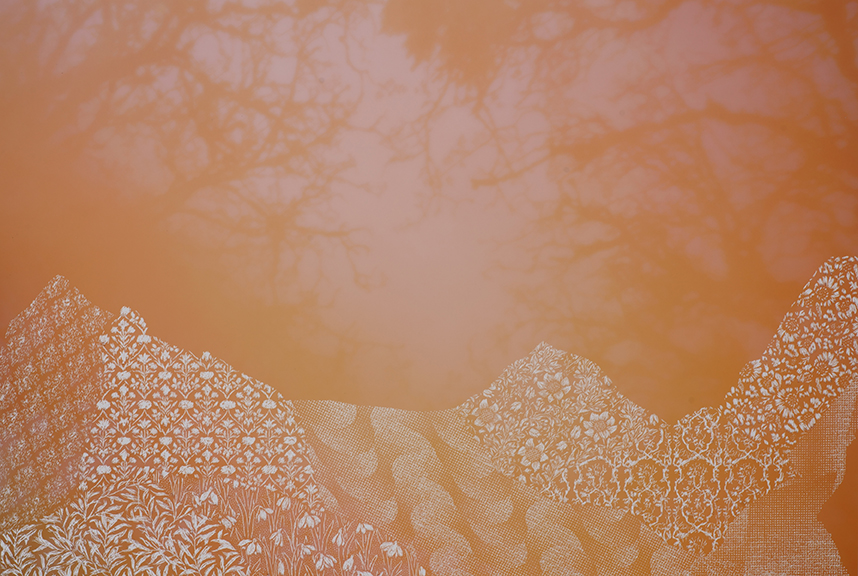 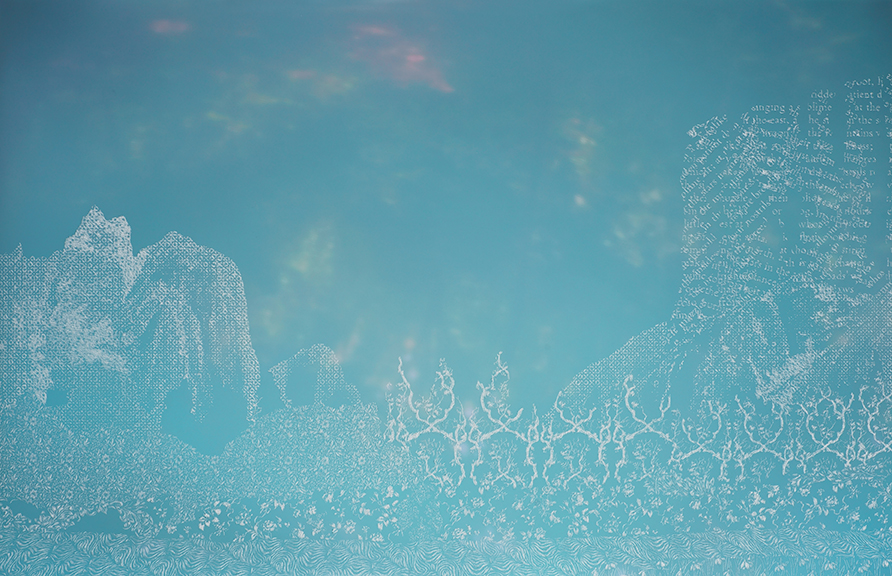