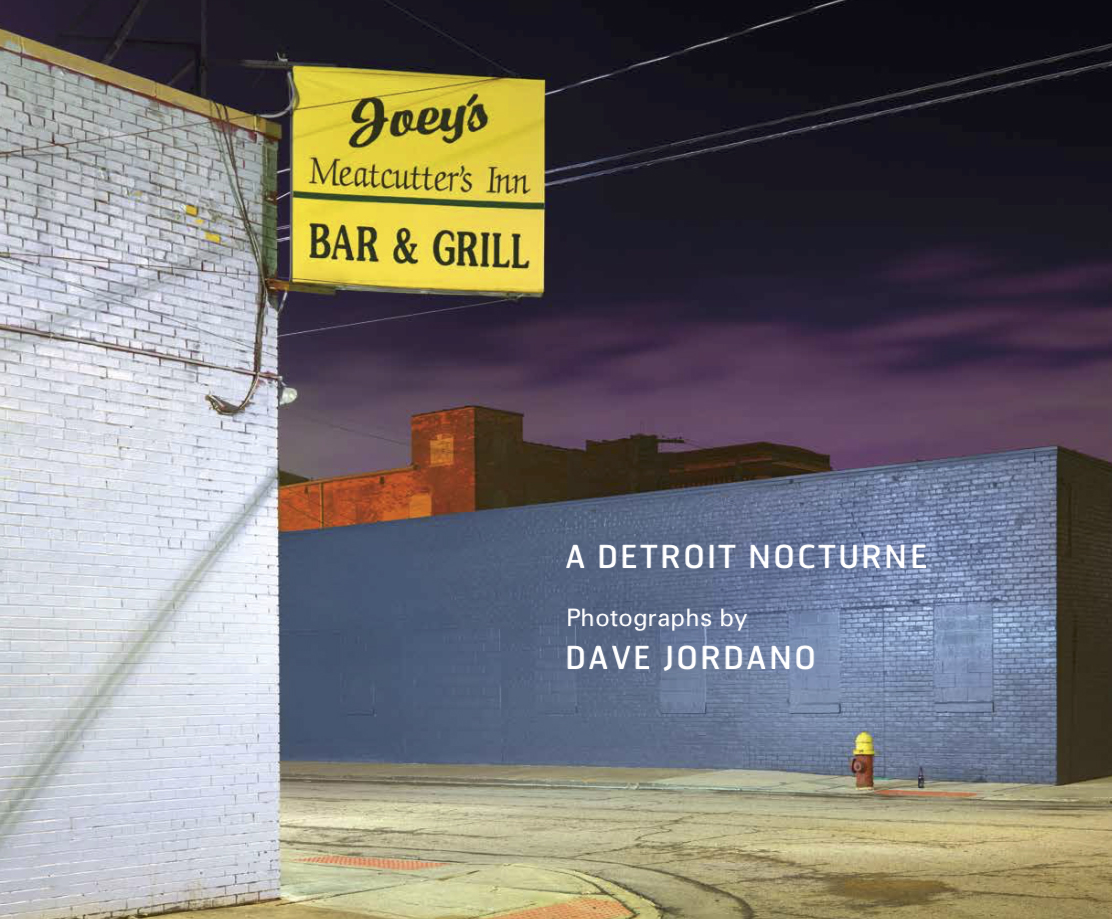 The masterful Dave Jordano has a new book, A Detroit Nocturne, published by PowerHouse Books. This new monograph continues his documentation of Detroit and reflects a life of looking at people and places with sensitivity and depth. In 2015, he released Detroit: Unbroken Down (powerHouse Books, 2015) which documented the lives of struggling residents, but this new monograph allows us to examine the history and beauty of Detroit at night. Places that are unremarkable in the daylight, take on new incarnations, glowing and proud. The photographs are not nostalgic, instead they are a tribute to the past and present, to the tenacity of a people and a city. As Dave states, “Pieces of the past, present, and future are rendered here to carefully consider. They are after all the physical evidence of where we have carved out our collective ambitions and lived out our dreams.”

A Detroit Nocturne can be purchased through PowerHouse Books or through Amazon. 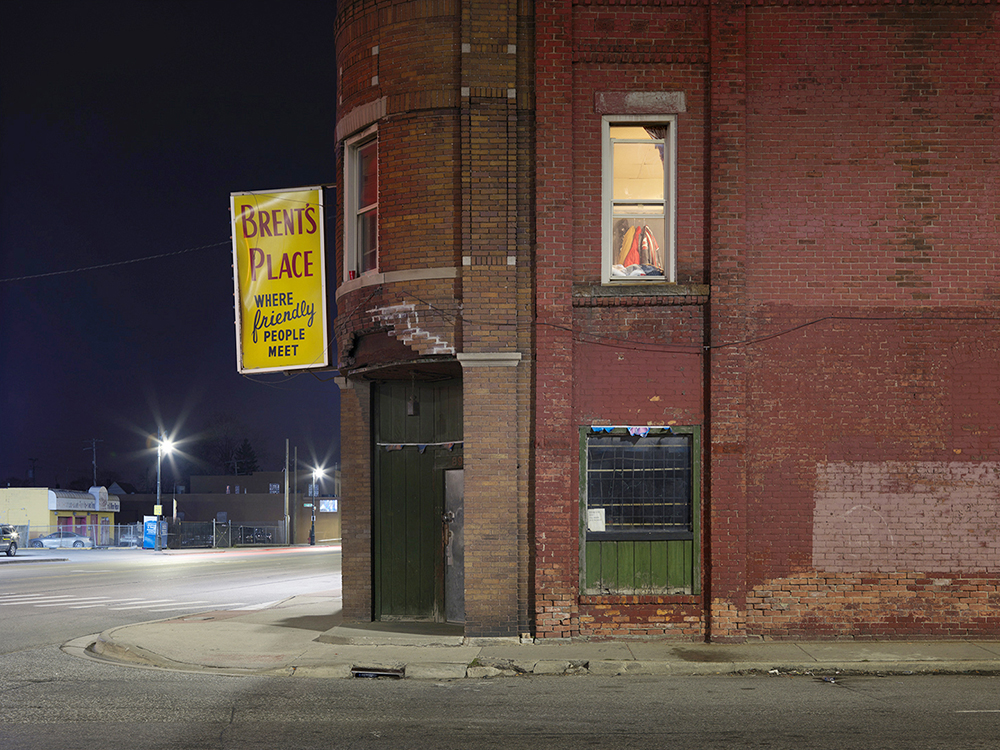 Dave Jordano was born in Detroit, Michigan in 1948. He received a BFA in photography from the College for Creative Studies in 1974. In 1977 he established a successful commercial photography studio in Chicago, shooting major print campaigns for national advertising agencies. Jordano is the author of Detroit: Unbroken Down (powerHouse Books, 2015) and has exhibited nationally and internationally and his work is included in the permanent collection of several private, corporate, and museum institutions, most notably the Museum of Contemporary Photography, Chicago; the Museum of Fine Arts Boston; the Museum of Fine Arts Houston; the Detroit Institute of Arts; the Detroit Historical Museum; The Mary & Leigh Block Museum of Art at Northwestern University, Evanston; Library of Congress, Division of Prints and Photographs; the Harris Bank Collection; and the Federal Reserve Bank.

Karen Irvine is Curator and Associate Director of the Museum of Contemporary Photography at Columbia College Chicago. She has organized over forty five exhibitions of contemporary photography, at the MoCP and other venues including the Hyde Park Art Center; Rockford Art Museum; Lishui International Photography Festival, China; Daegu Photography Biennale, South Korea, and the New York Photo Festival. Irvine has contributed texts to many publications including FOAM, Art on Paper, and Contemporary magazines, and monographs including Ann Lislegaard: Eyes Wide Open (The Royal Museum of Photography, Copenhagen); Paula McCartney: Non-flights of Fancy (Princeton Architectural Press); Barbara Probst: Exposures (Steidl); Redheaded Peckerwood by Christian Patterson (MACK), and Stefan Heyne Speak to Me (Hatje Cantz), amongst others. She has a BA in French and International Relations from Tufts University, Medford, MA, an MFA in photography from FAMU, Prague, Czech Republic, and an MA in art history from the University of Illinois at Chicago. 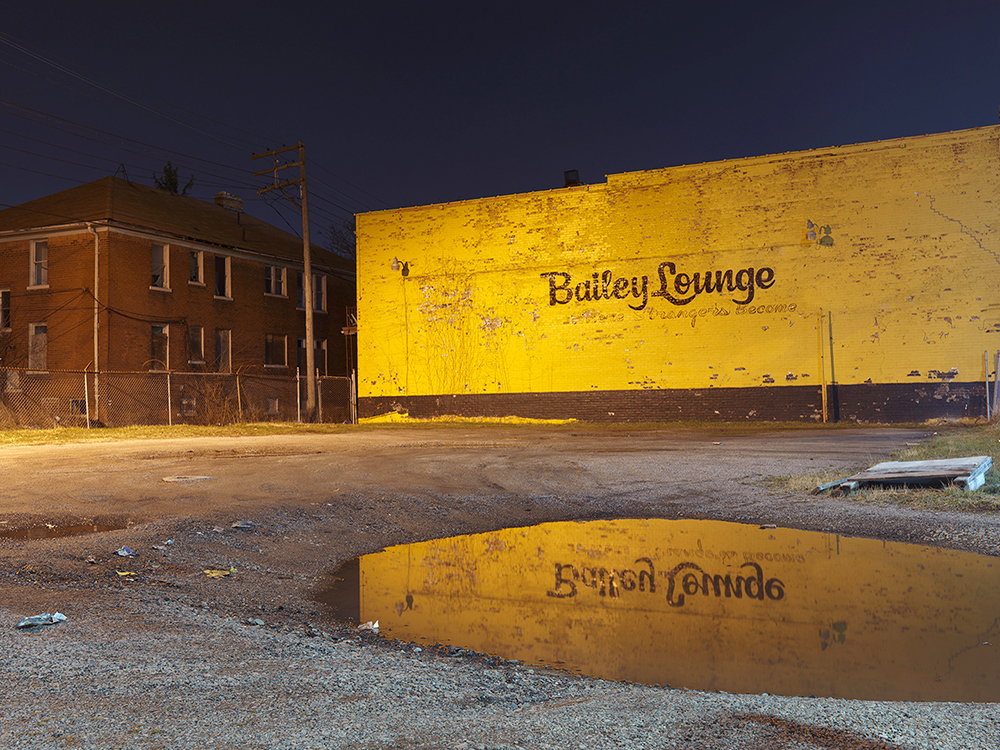 In a continuation of my previous work in “Detroit:  Unbroken Down” which documented the lives of struggling residents, “A Detroit Nocturne” relies more heavily on the absence of the people who inhabit Detroit, but this is not say that I’m not aware of their presence.  These photographs represent a visual document that speaks to the quiet determination of its residents, both as independent shop operators and as home owners who have survived the long and difficult path of living in a post-industrial city stripped of economic prosperity and opportunity.  In many rust-best cities like Detroit, people’s lives often hang in the balance as neighborhoods support and provide for each other through job creation, ad hoc, community involvement, moral and spiritual support, and a well-honed DIY mentality.

With all the media attention about Detroit’s rebirth and revival, it’s important to note that many neighborhoods throughout the city have been surviving for years, relying on local merchants and businesses that operate on a cash only basis who have stuck it out through decades of economic decline.  Relying on a strong sense of self-preservation, individuals struggle to survive by maintaining a healthy sense of connection without the fear of giving up.  All of these establishments, whether large or small are in many ways a marker of the ongoing story that is Detroit, a testament to the tenacity of the city’s residents who are trying desperately to hold on to what is left of the social and economic fabric of the city.

These photographs speak to that truth without casting an overly sentimental gaze.  I’ve chosen to make these images at night not only to put more emphasis on their locale by presenting them in an unfamiliar light, but also to introduce a moment of quiet and calm reflection.  Pieces of the past, present, and future are rendered here to carefully consider.  They are after all the physical evidence of where we have carved out our collective ambitions and lived out our dreams. – Dave Jordano 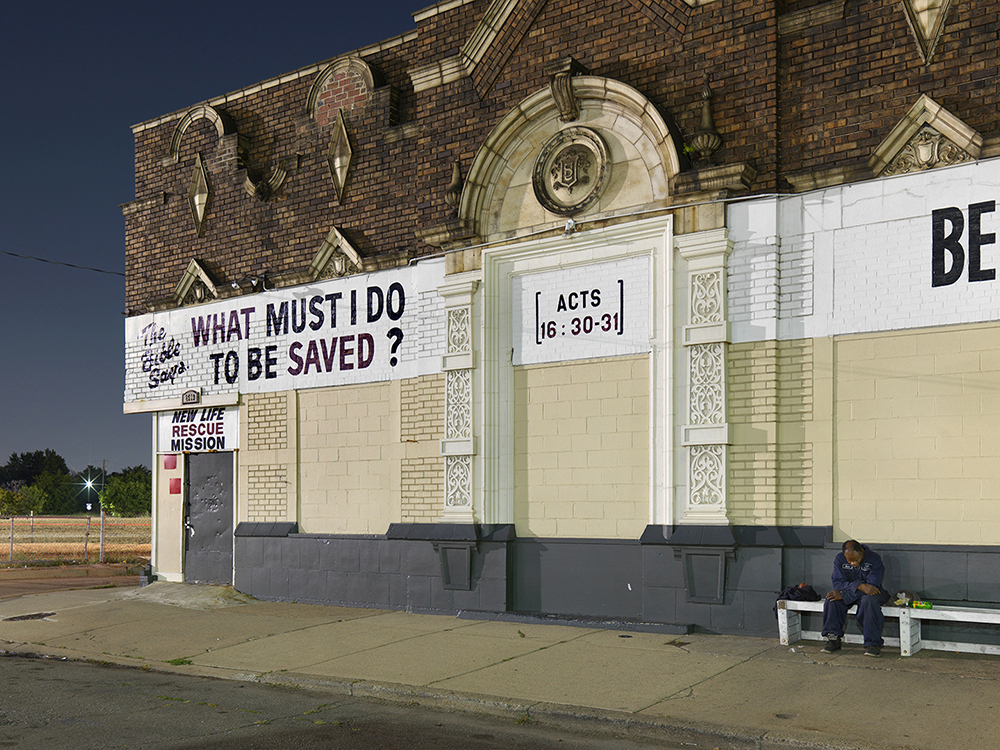 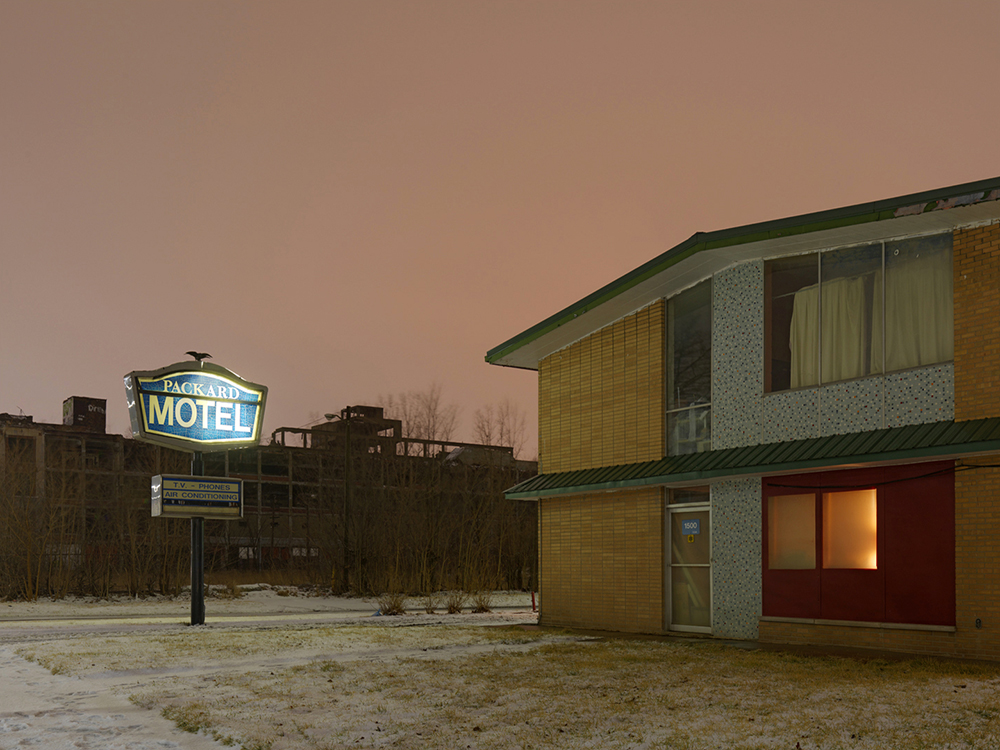 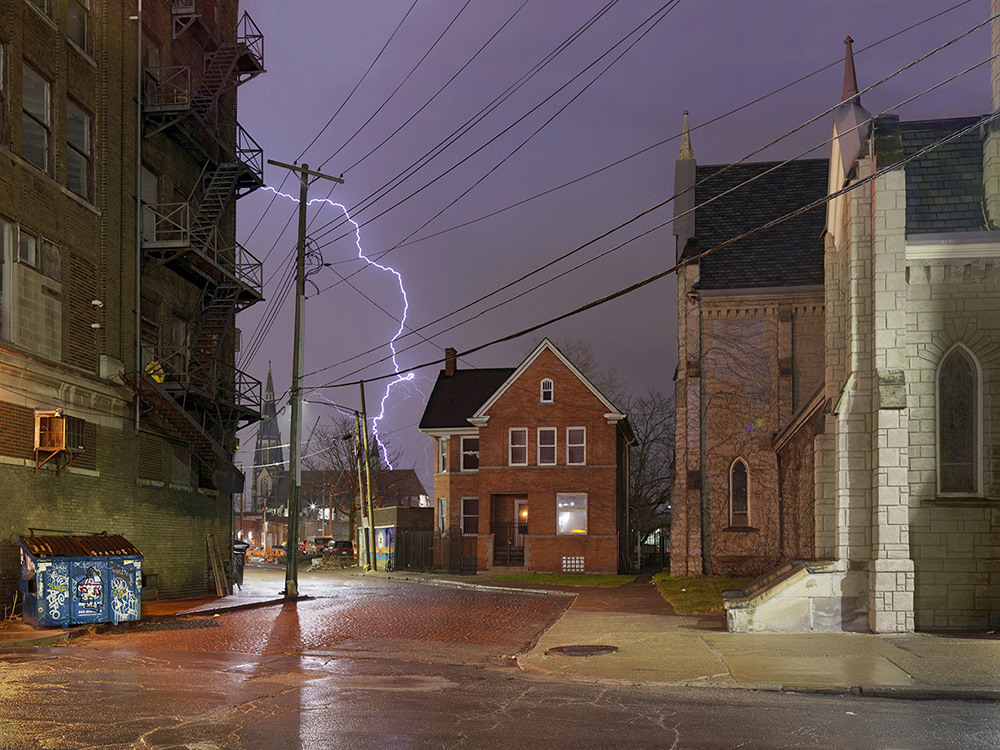 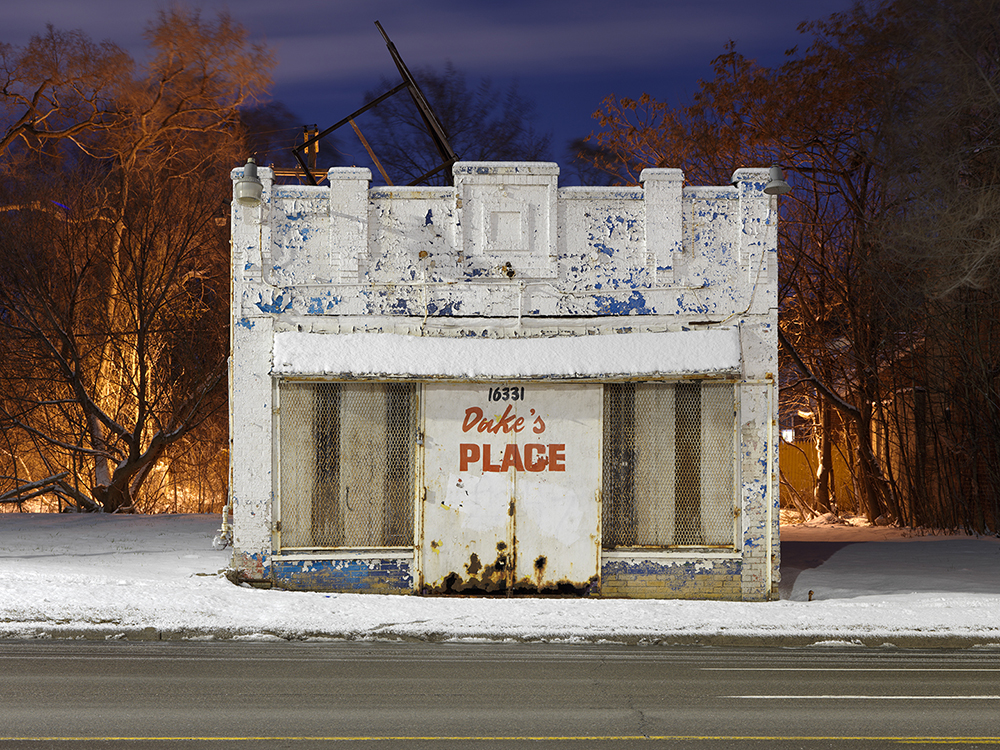 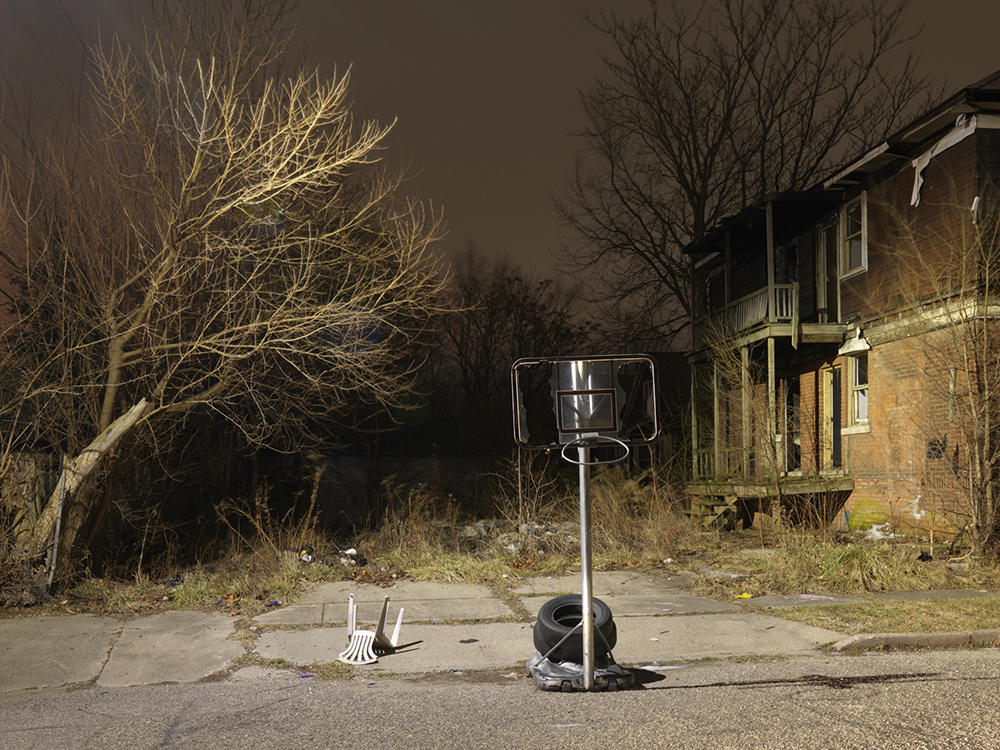 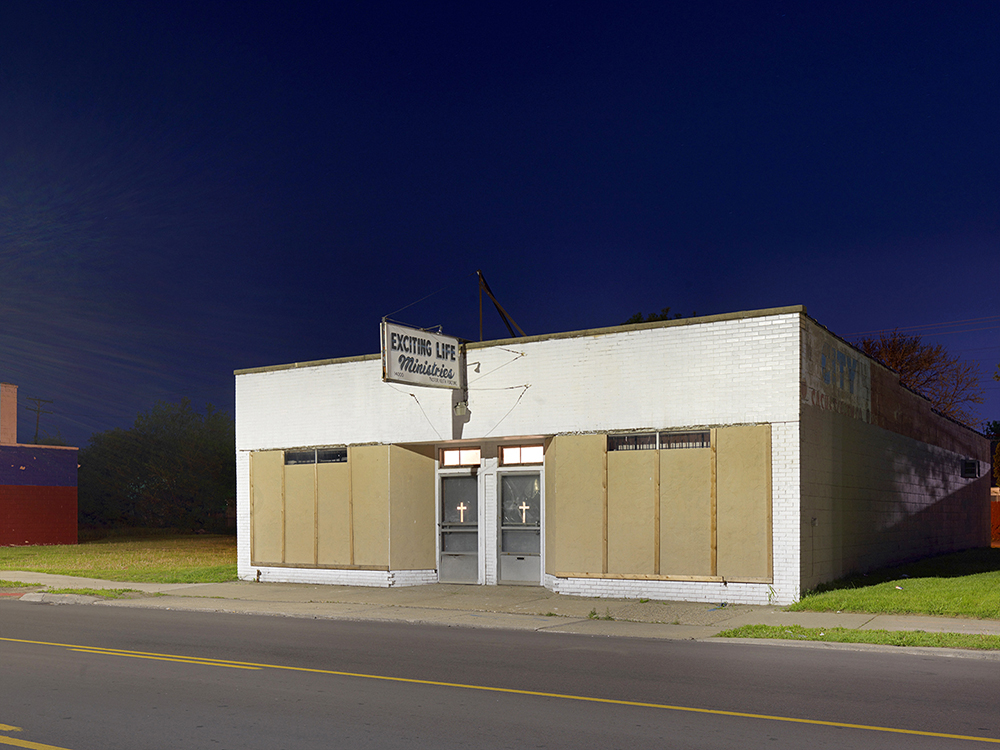 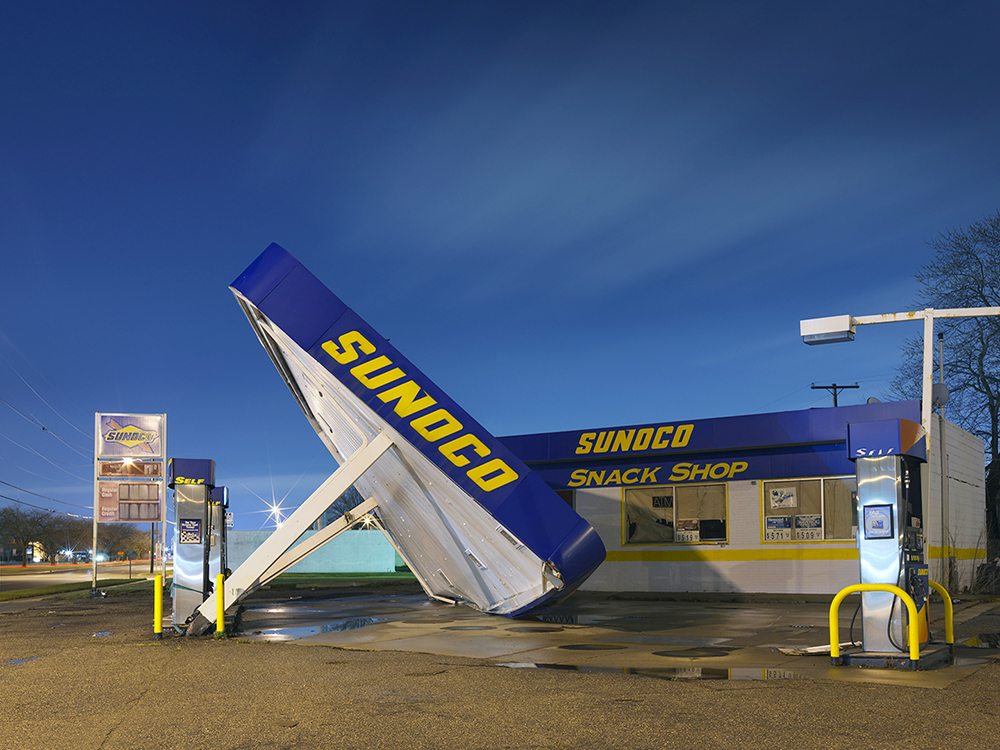 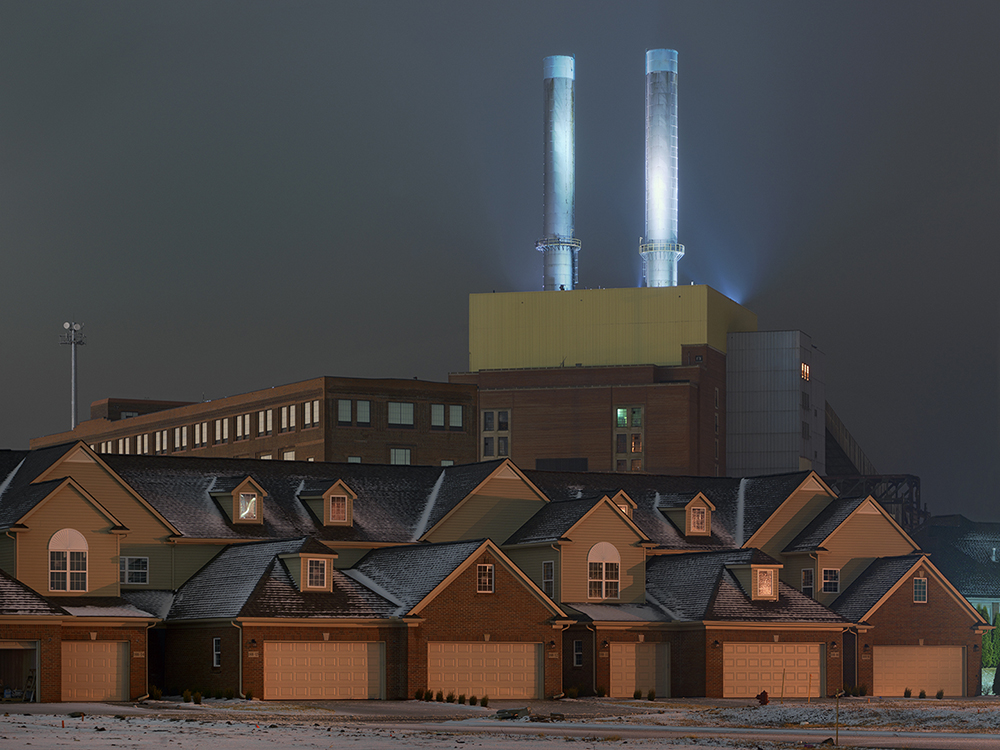 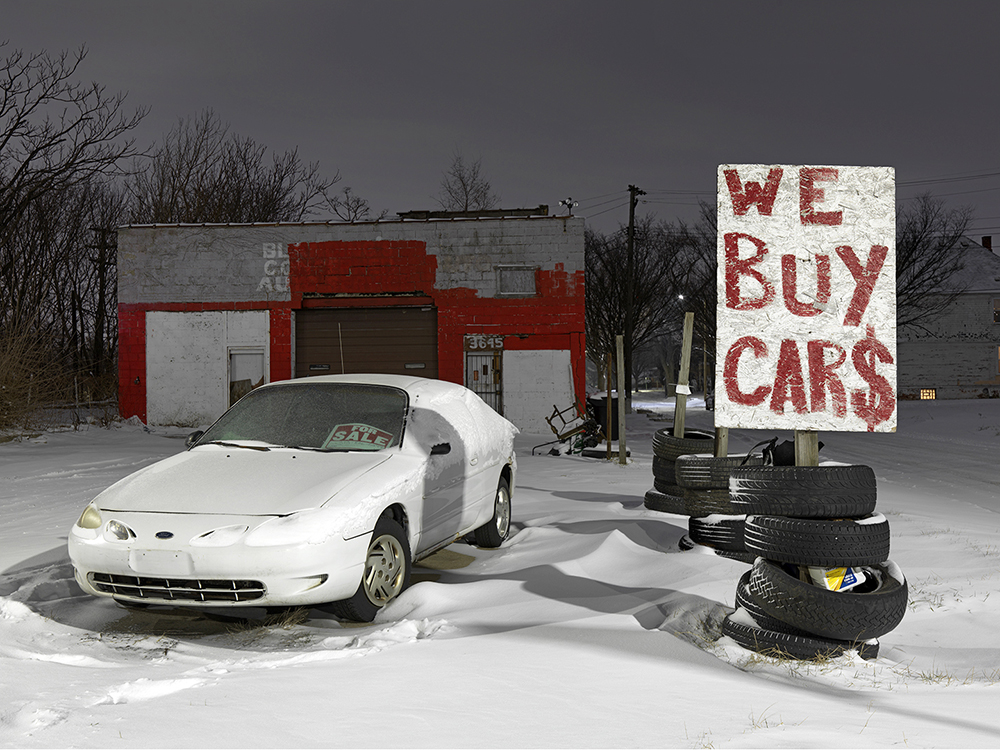 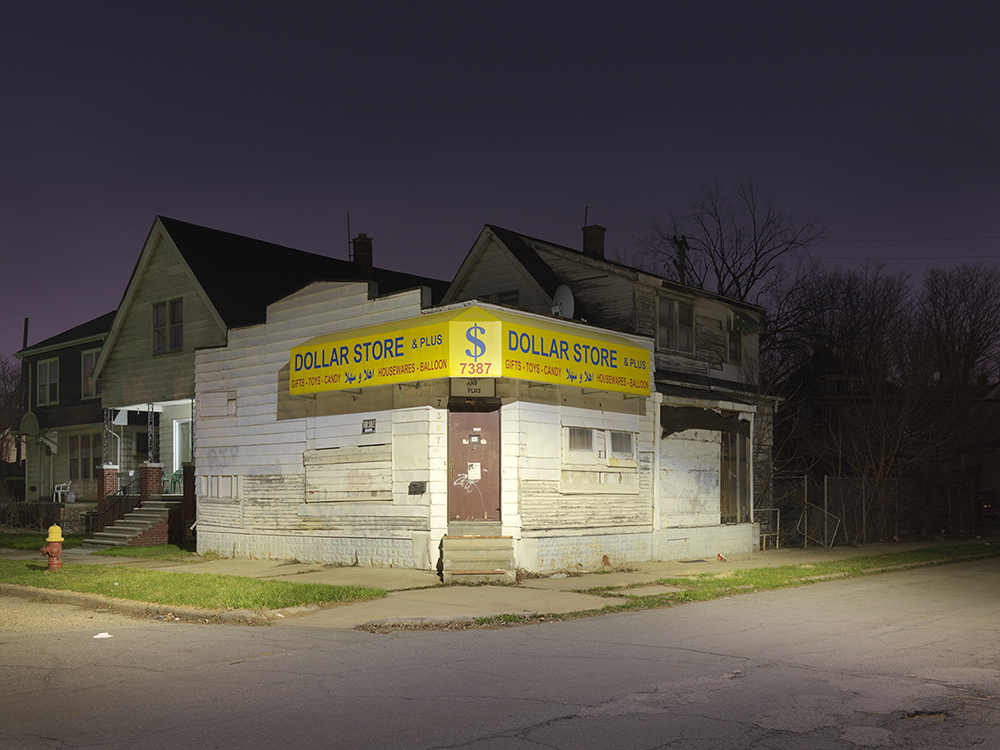 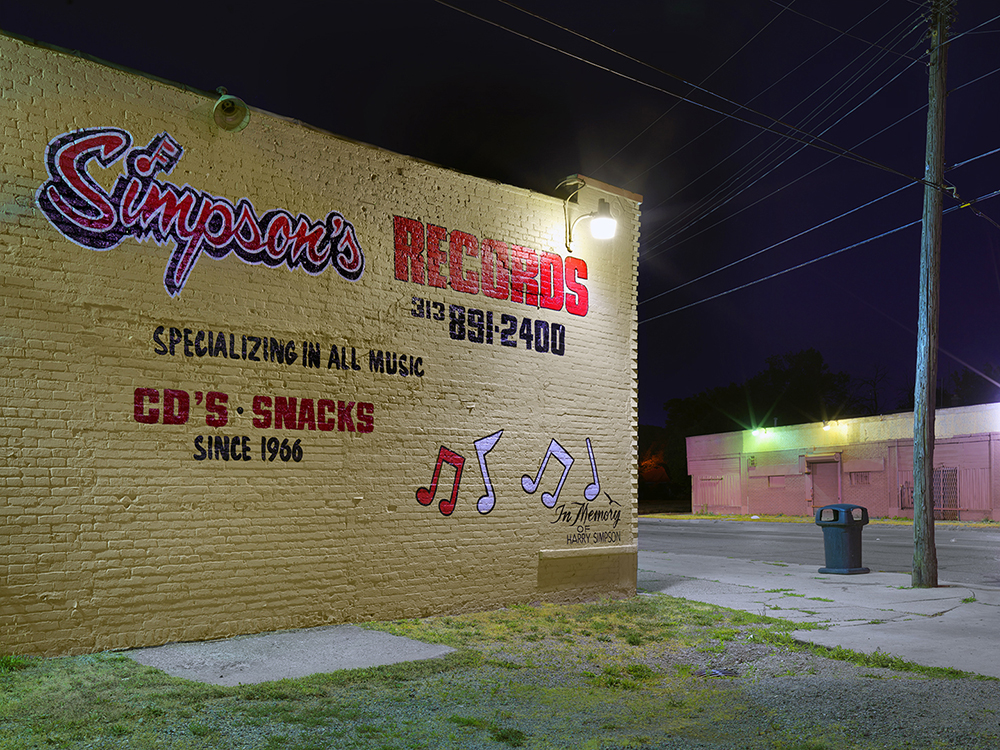 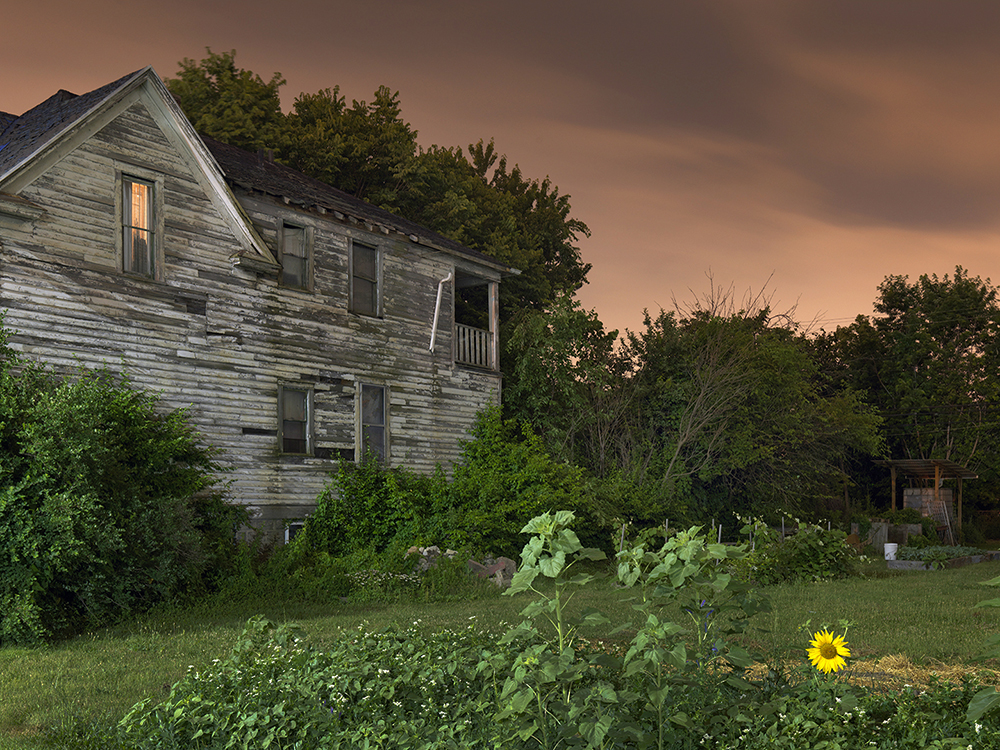 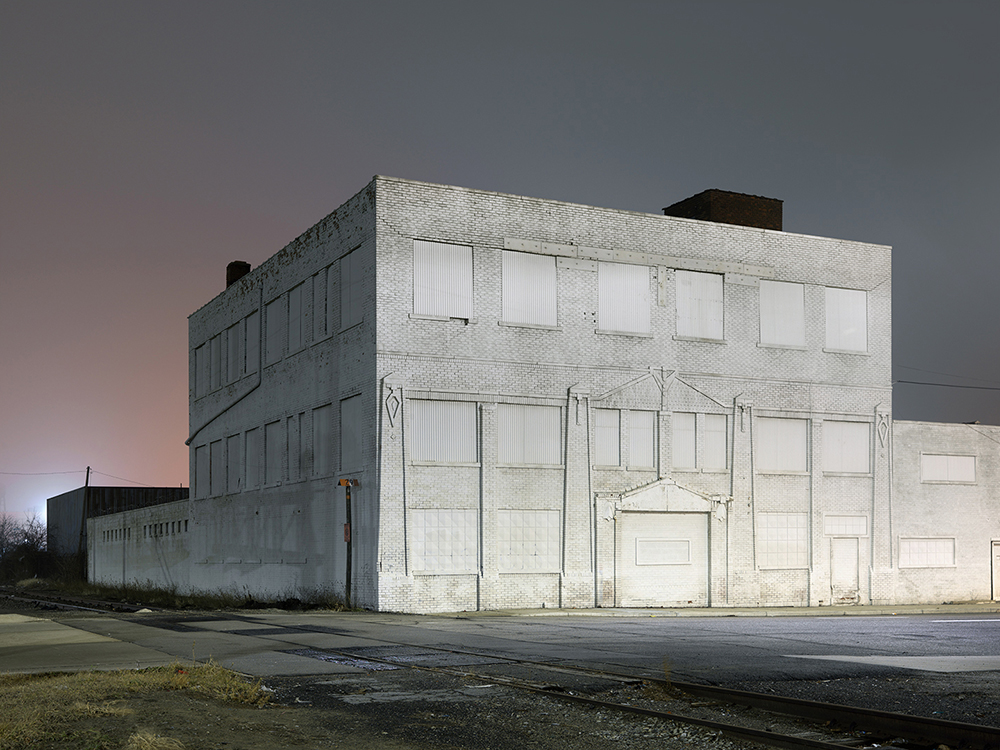 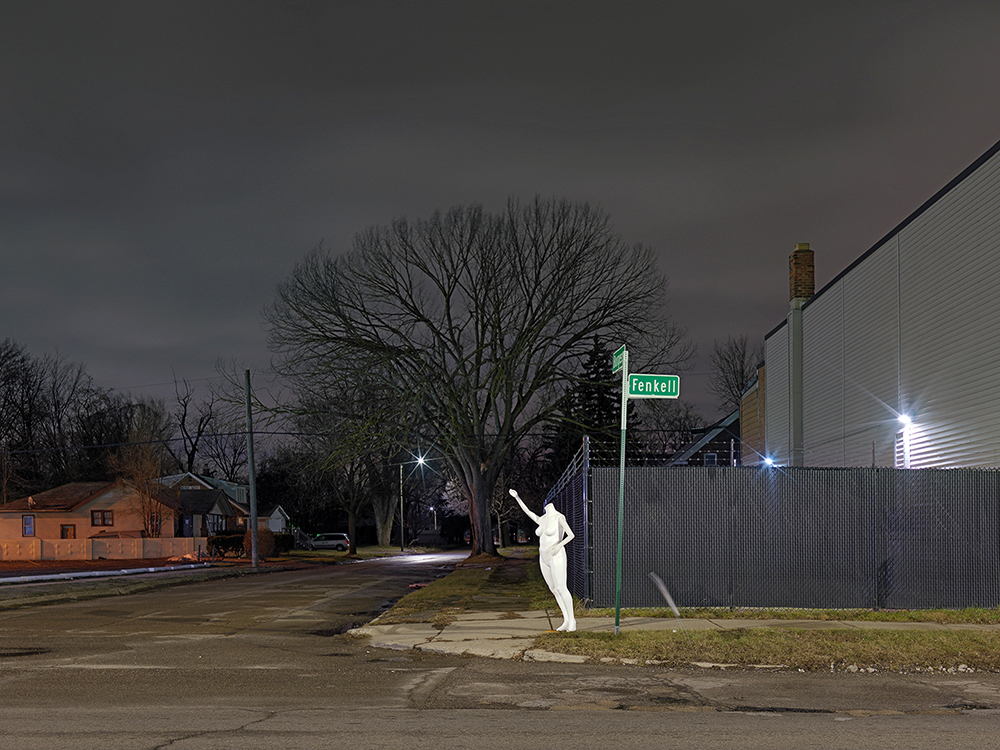