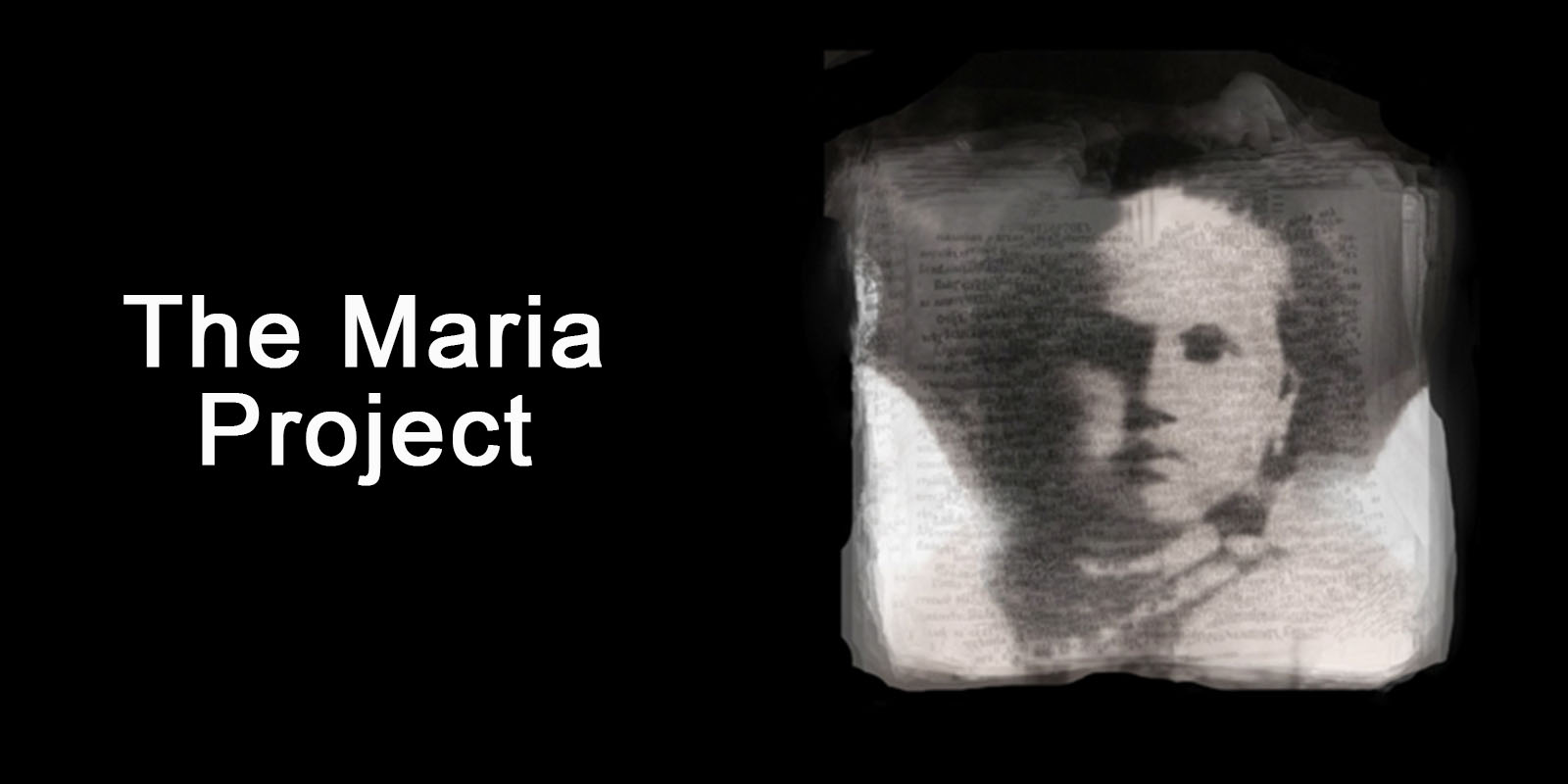 Congratulations to Lesia Maruschak for her First Place win in CENTER’S Director’s Choice Award for her project, The Maria Project. The Choice Awards recognize outstanding photographers working in all processes and subject matter. Images can be singular or part of a series. Winners receive admission to Review Santa Fe portfolio reviews and participation in a winner’s exhibition at Pictura Gallery in Bloomington, IN. 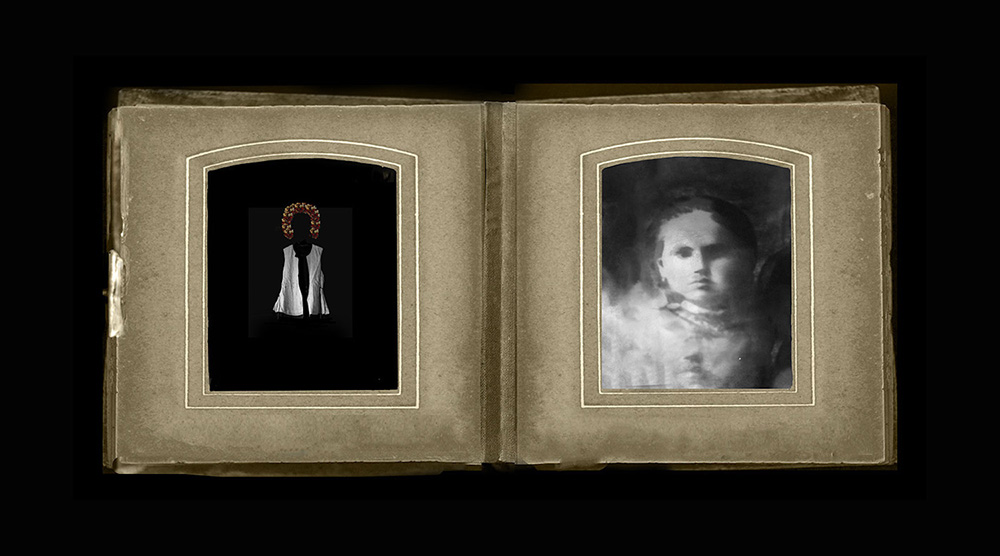 © LESIA MARUSCHAK, FAMILY ALBUM NO.1 At the center of the project is a single vernacular image of a young girl, Maria F., who survived the Holodomor and currently resides in Canada. Maria’s transfigured image in this fabricated album alludes to what life might have been like before the famine. The maiden’s garments to the left of Maria are compiled from artifacts in my collection dating to the time of the famine. Maria is 95 and resides in Canada. 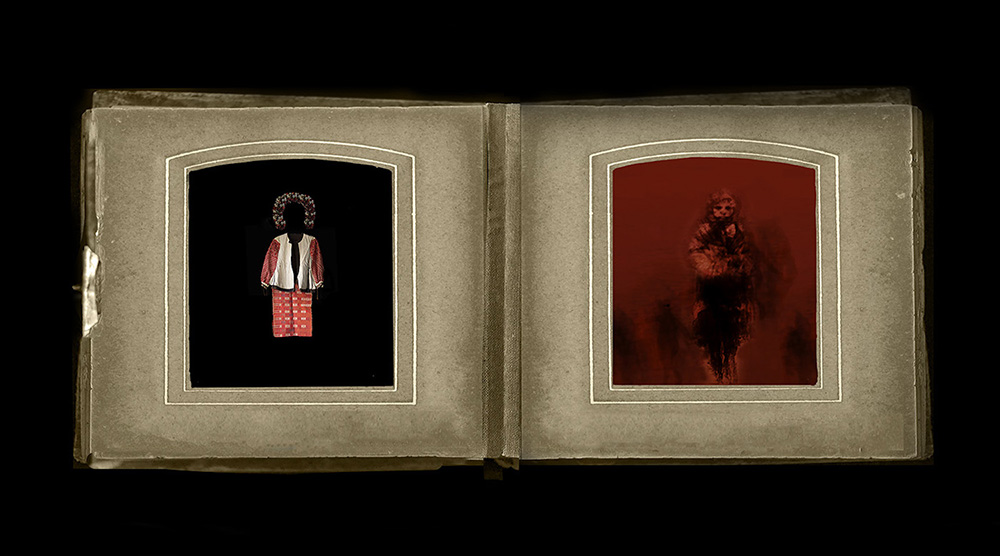 © LESIA MARUSCHAK, FAMILY ALBUM NO.2 The MARIA project began with screen captures gathered on the Internet. I eventually put out a call on Facebook and received one unexpected response: a family photograph of young Maria F. with her parents, taken in Ukraine. Maria F. became the heroine of my story.

The Maria Project memorializes the Ukrainian genocide of 1932-1933, also known as the Holodomor. The word Holodomor is a combination of the Ukrainian words for hunger (holod) and extermination (mor). It is a complex, highly debated, historical event. There are many vested interests, and hence many diverging stories. Eyewitness accounts attest to the fact that the famine was political and intentional; a state-sponsored assault on a single ethnic group as part of the Soviet Union’s new socio-economic model that required the subjugation of a sizable population whose national consciousness stood in the way of the new order.

As a Canadian artist of Ukrainian descent, I struggle to make sense of this event that has shaped my identity and that of my community. How is it that we move from an intellectual and emotional experience to a lasting shift in human conscience and morality? I believe that empathy is the critical factor; creating links between visitors, their lives, and the past with its associated trauma.

The project utilizes three kinds of images from series entitled RED, TRANSFIGURATION and COUNTING. A fictional album of Maria’s life offers an illusionary sense of order while pointing to the impending horror. Lead-like images derived from a laborious process and the use of ash, pigments, parchment, wax and felt express the feeling of starvation – the body transformed into skin and bone – the spirit destroyed. 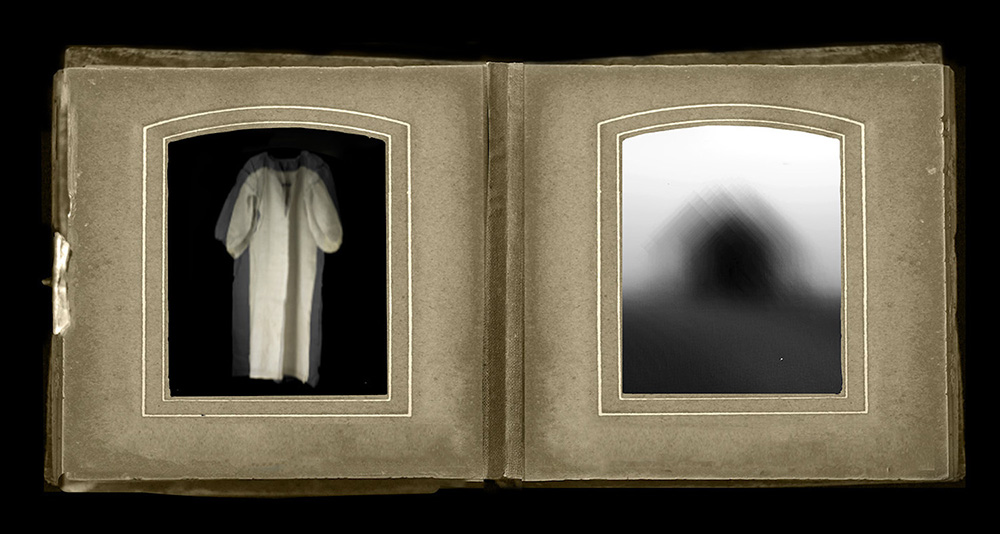 © LESIA MARUSCHAK, FAMILY ALBUM NO. 3 Maria F. inspired me to create the series RED where I photographed archival garments, dissected Maria’s photograph, scanned a crumbling 19th century album initially used for cabinet cards and created collages with all my raw materials. The result is a fabricated representation of an invisible geography.

Lesia Maruschak is a photography-based artist with a unique lens on the creation of mobile memorial spaces. Born in 1961 in Saskatchewan she spent her childhood on the Canadian prairies, land settled by her ancestors in 1874. In the mid-1970s she first picked up a camera, to which she did not return until 2016.

Maruschak’s work – a complex exploration of memory and sensual expression – informs and expands what it means to create memorials in an age where the “what and why of museums” is in question. Her humanist approach and abstract sensual representation of modern-day atrocities set her apart from other photographers, at a time when photojournalism and documentary evidence continue to shape the truth-telling and proof-seeking roles of memorial museums. According to Monica Allende, “Maruschak’s work reflects on the visual memory of history, and the role of the artist in the decolonization of narratives which are critical issues in photography debate.” Using a narrative approach, her work comprises objects and installations encompassing photographs, paper works, textile figurative sculptures, and film. Dr. Sabina Tanovic notes that Maruschak’s approach to memorial spaces, as exemplified by her most recent book TRANSFIGURATION, “…is a brilliant intervention in the vast field of memory studies.”

In just three years of practice Maruschak’s works have been collected by museums, exhibited in many solo and group photographic exhibitions in nine countries. She has published four books; her Limited-Edition Art Book, TRANSFIGURATION, has been acquired by numerous private and public collections including Stanford University, Athenaeum, Columbia University, Thomas J. Dodd Research Center, and the Library of Congress. Maruschak collaborates with recognized international memory museums, lectures at international conferences such as FORMAT 19 University of Derby (2019) and Why Remember? Sarajevo (2019). She makes special guest appearances at photo festivals including PhotoVenezia (2018) and Palm Springs Photo Festival (2017). In 2014, The Governor General of Canada presented Maruschak with the Caring Canadian and Silver Medal Award for her work.

Maruschak holds a MA in Ethnography and an MBA in International Management.

She spends her time between Alvena and Ottawa, Canada. 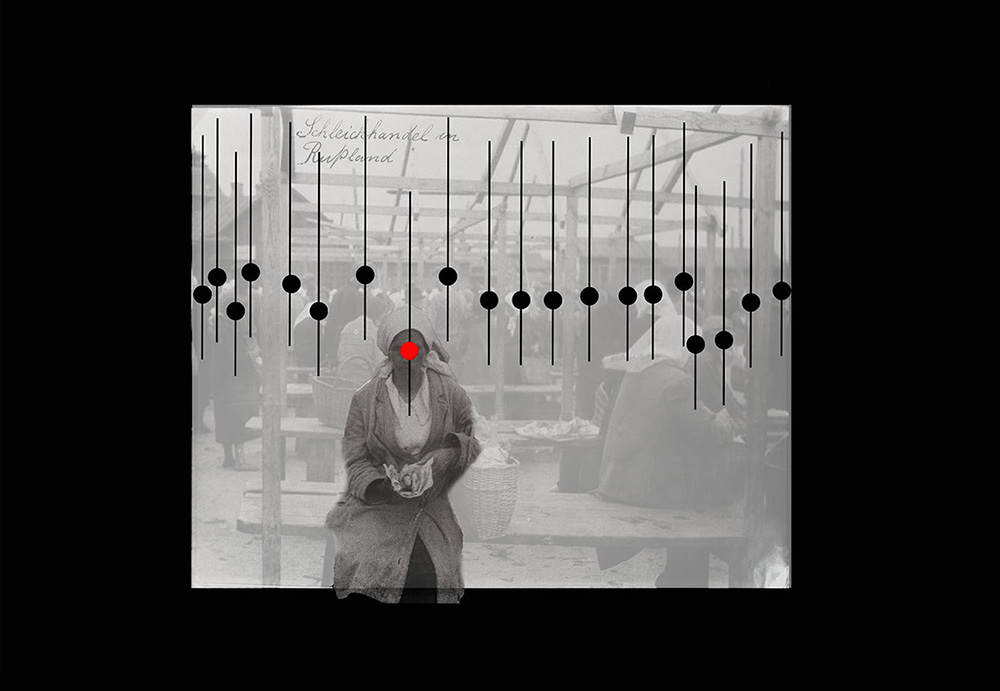 © LESIA MARUSCHAK, RELIC NO. 41 FOUR DRIED FISH TO SELL This work is from a series called COUNTING, derived from authenticated images taken by Alexander Weinberger, an engineer who lived in Kharkiv, Ukraine, during 1932-33. An abstract representation of the ancient Salamis counting tool, COUNTING explores my inability to grasp the conscious eradication of human life on such massive scales.

© LESIA MARUSCHAK, The DIGGERS The Diggers is derived from IPHONE captures. The image here is part of a work in progress. When completed it will be a large-scale, heavily worked piece printed on kozo paper, treated with wax, ash and pigment. I am not interested in being bound by categories and so, while my work is photo-based, it draws from multiple arenas. It is unstable, dynamic, moving from one form to another; a type of translation, where no single practice dominates. 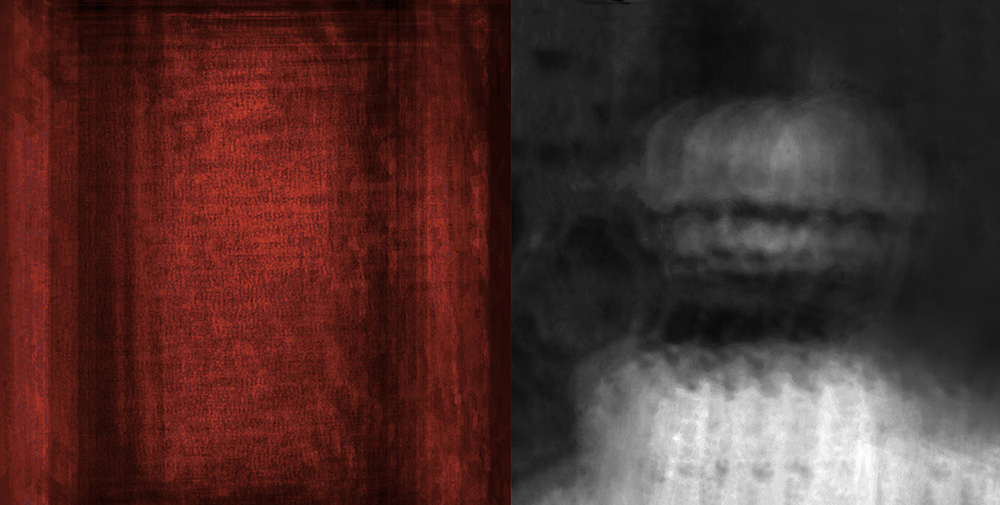 © LESIA MARUSCHAK, DIPTYCH: DAMNATION / BRAT DAMNATION manifests a mediated antique prayer book found in the markets of Ukraine, 2017. This time it is in red, as if bearing witness to the horror. The work BRAT, the Ukrainian word for brother, is an example of the artistic gesture I created in my digital lab to give a palpable presence to the millions who perished. The mediated images are painstakingly treated with ash and wax giving them an almost leaden presence. My transformations of documents into artworks work to give tangible materiality to this modern-day atrocity.

© LESIA MARUSCHAK, DIPTYCH: MY DOLL / THE CHOSEN I sometimes ask myself whether my primary aim is to establish a presence or an absence, the disappearance of something close — a type of separation. While it is important that a trace of the source image remains, as it does in the case of this Diptych entitled My Doll / THE CHOSEN, I actually want the viewer to struggle with the image, hopefully gaining appreciation as they engage. The color red pulsates throughout these works pointing to life, death, the communist rule and Stalin’s reign. 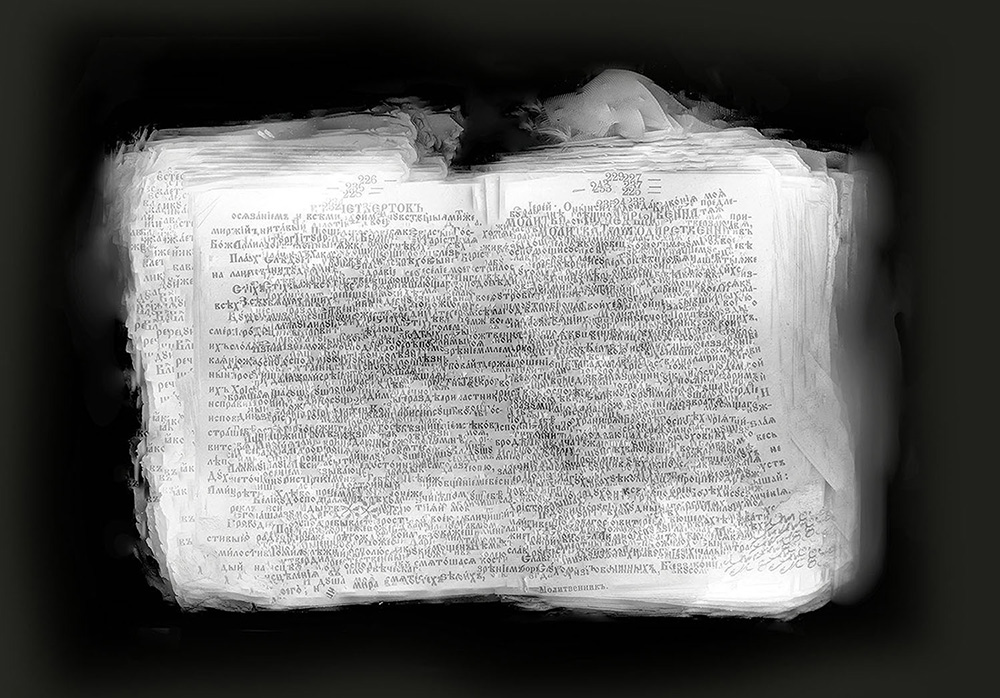 © LESIA MARUSCHAK, MOLYTVA NO. 1 This work presents 5000 layers of sacred text derived from an antique prayer book found in the markets of Ukraine, 2017. The image – a hallmark of the series’- explores the tortuous process of a starving body turning into skin and bone. Egg tempera, gold and various pigments are applied to images printed on kozo paper and then pigmented with ash, wax, resin and salt. These materials arise from my interest in Byzantine art. In these paper works, aspects of the surface come into play as the materials, brought into action with my hand, disappear (or not) into the paper. The works are scarred with lumps of ash. Trapped by wax, they hide retraced cryptic words in Old Church Slavonic, a language that has been dead for centuries. They oxidize when exposed to light and temperature changes, they bear traces of suppressed hand marks and finally they are degraded with audience’s human touch. 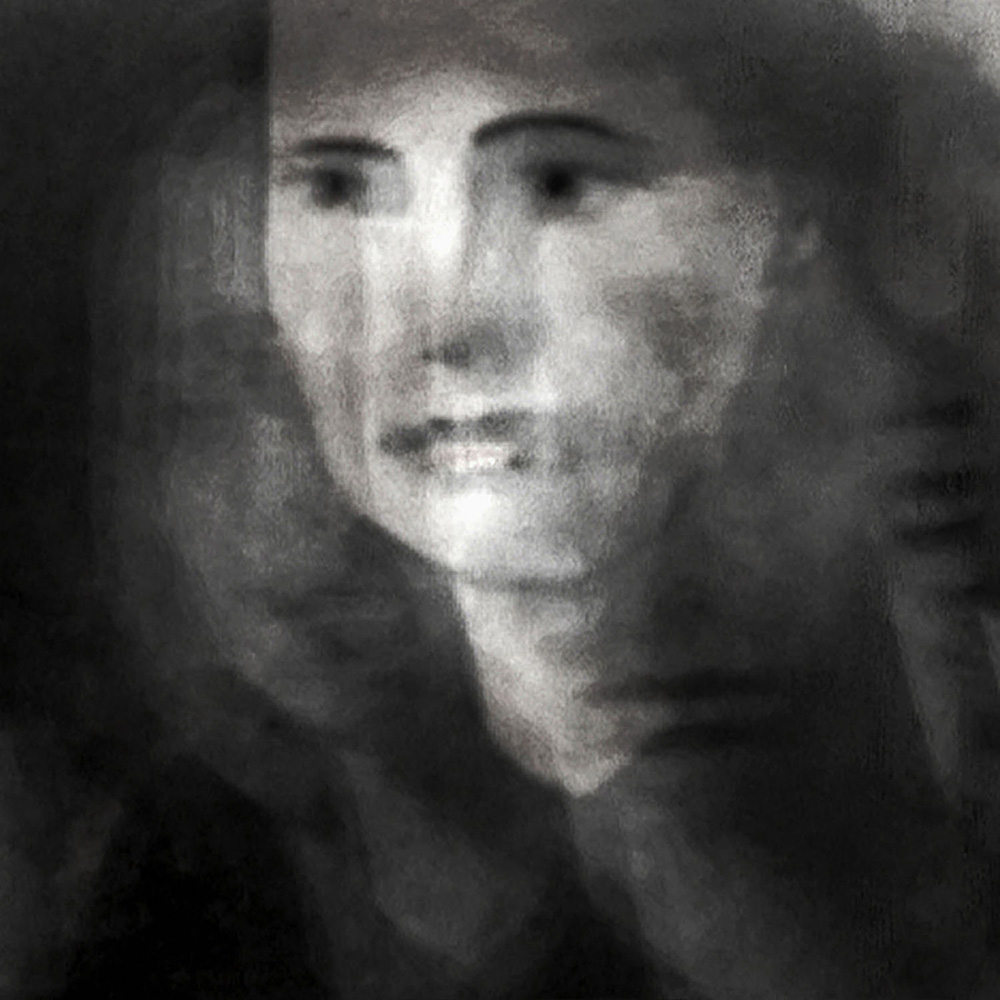 © LESIA MARUSCHAK, MAMA For me, Maria’s mother is a metaphor for a nation, a people, for the endless struggle where geopolitical boundaries, economics and more fracture our societies and position wo/man against wo/man resulting in countless losses. The works in this series are dynamic and performative, revealing conditions of the body through the laborious methods of making; bringing forth presence where there was absence. Materials are caught in relation to each other and the world in which they occupy space – the tangible world, the space of the audience and of the future. 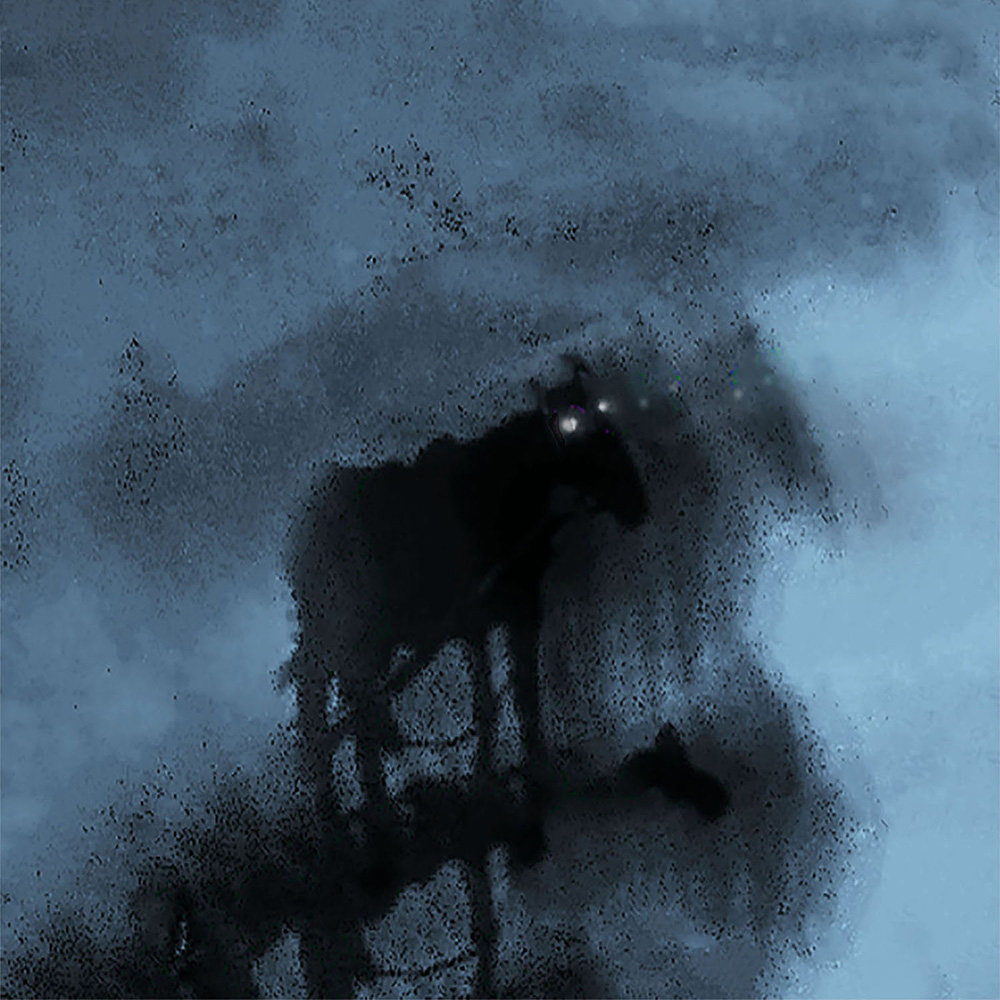 © LESIA MARUSCHAK, THE HORSE WAS NEXT New constructions facilitate memory making, reveal a context, and create a space for the viewer to experience and revisit the famine in Soviet Ukraine. I want this project to transform the ways we remember this tragedy, and inform how we relate to similar ones, keeping the experience of the art located in the present. 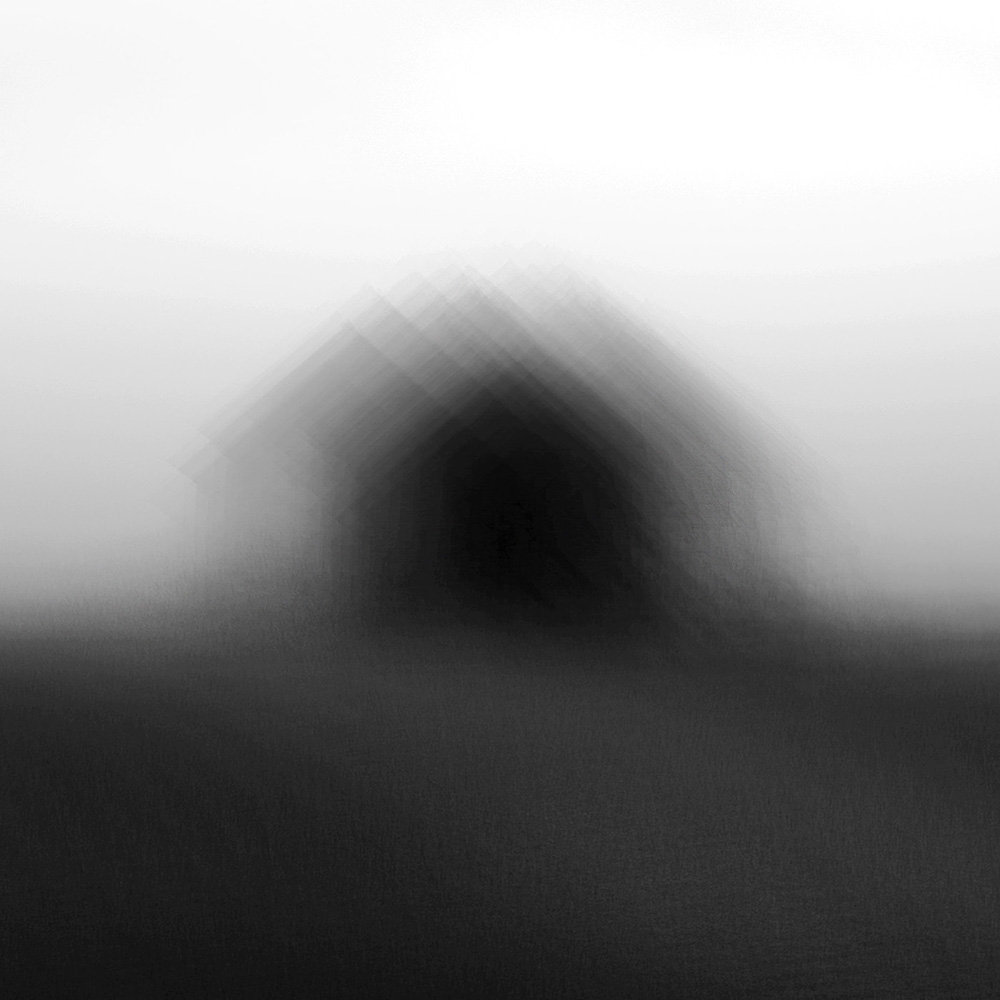 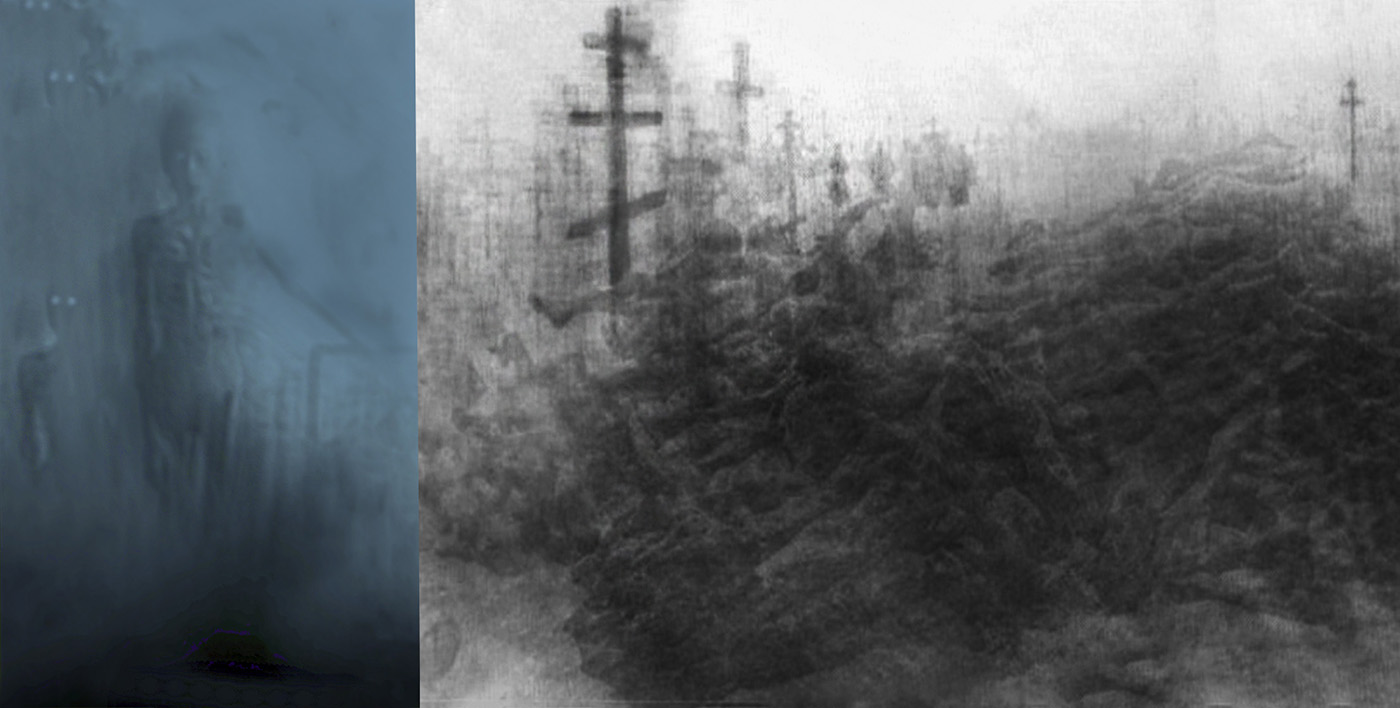 © LESIA MARUSCHAK, DIPTYCH: BLUE CHILD / REQUIEM There are very few people still living who personally experienced the Holodomor. I have known three – all of whom are now dead from old age. Only one spoke to me of the event, describing the lack of food and how they ate the soles of their shoes. Testifying before U.S. Congress, witness Tetiana Pavlychka remembered that her sister, “had a large, swollen stomach, and her neck was long and thin like a bird’s neck. People didn’t look like people — they were more like starving ghosts.” In 33-I Holod — an archival publication compiled by Volodymyr Maniak and Lidiia Kovalenko — Mykola Stepanovych Pud recalled that his mother “looked like a glass jar, filled with clear spring water. All her body that could be seen … was see-through and filled with water, like a plastic bag.” In the same book, Anastasiia Maksiymivna Kucheruk could not rid himself of the memory of a child sitting, rocking its “body back and forth, back and forth,” reciting one endless “song” in a half voice: “eat, eat, eat.” These witness accounts run through my mind and emerge in my work like cinematic impressions: the repetition of the word “eat” by that child, the descriptions of humans translucent as glass jars, almost palimpsest like. 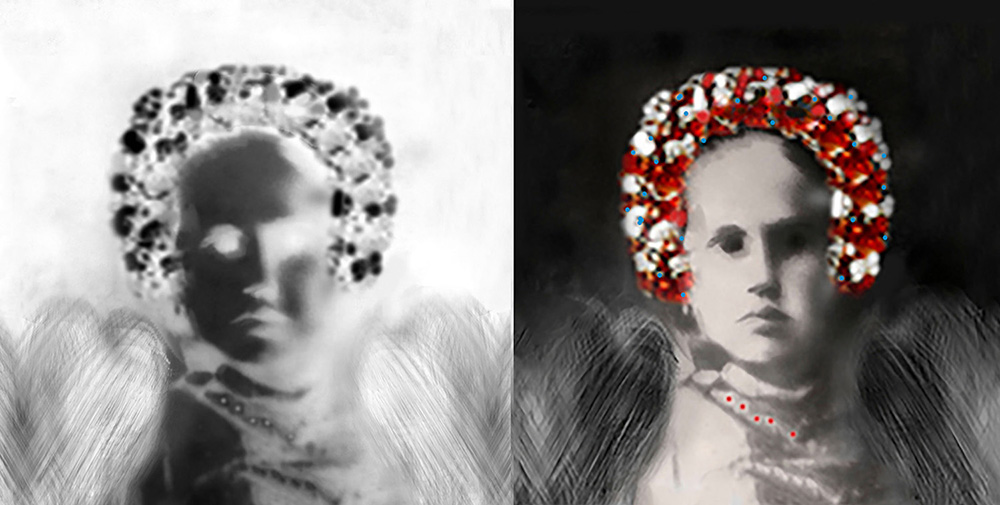 © LESIA MARUSCHAK, DIPTYCH: FINAL TRANSFIGURATION The MARIA Project, conceived of as a memorial act, bears witness to the many phases of its own gestation, which eventually turns into a memory of its own creation, to be experienced in a public space. This process of memory-making is shared with audiences to capture multiple dimensions of time. It iis a space for viewers to bear witness to an historical event by immersing themselves in a sensory experience and participating in the creation of individual and collective memories: themselves becoming creators of history.