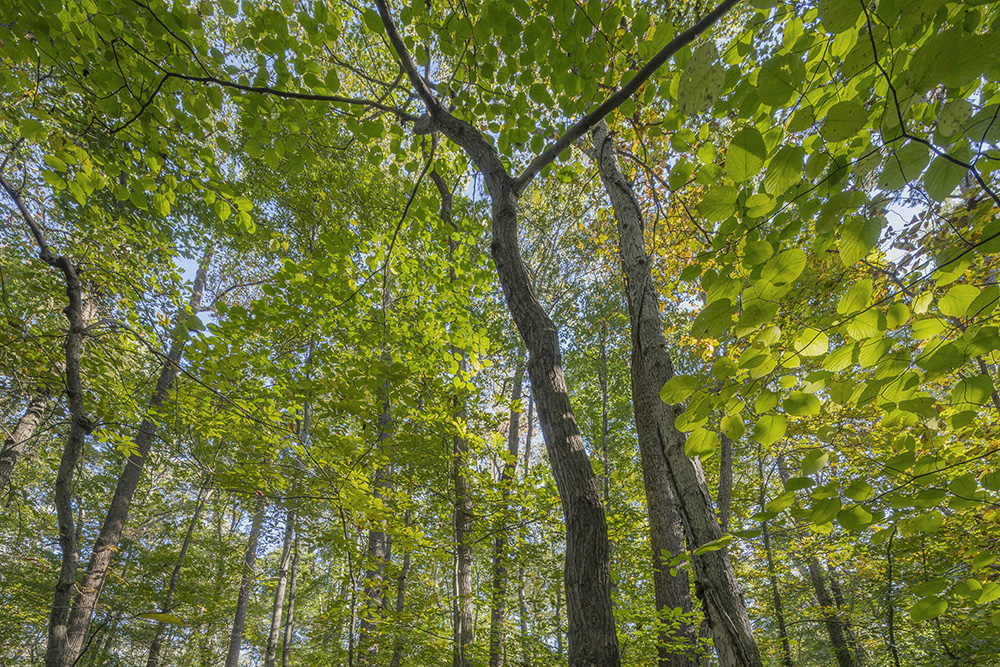 Peter Essick, named one of the top forty most influential nature photographers by Outdoor Photography Magazine, UK has a new book Fernbank Forest published by Fall Line Press. Essick’s photographs are included in museum collections and Spalding Nix Gallery in Atlanta currently represents his work. Essick is also the author of two prior books, The Ansel Adams Wilderness, and Our Beautiful, Fragile World. Fernbank Forest includes 35 poetic photographs of an old growth forest of the same name in the middle of Atlanta taken over a two-year period, as well as an essay by National Book Award winner and environmental activist Janisse Ray on the ecological importance of this area, both for its own sake and as an oasis in the midst of chaos for those who visit. 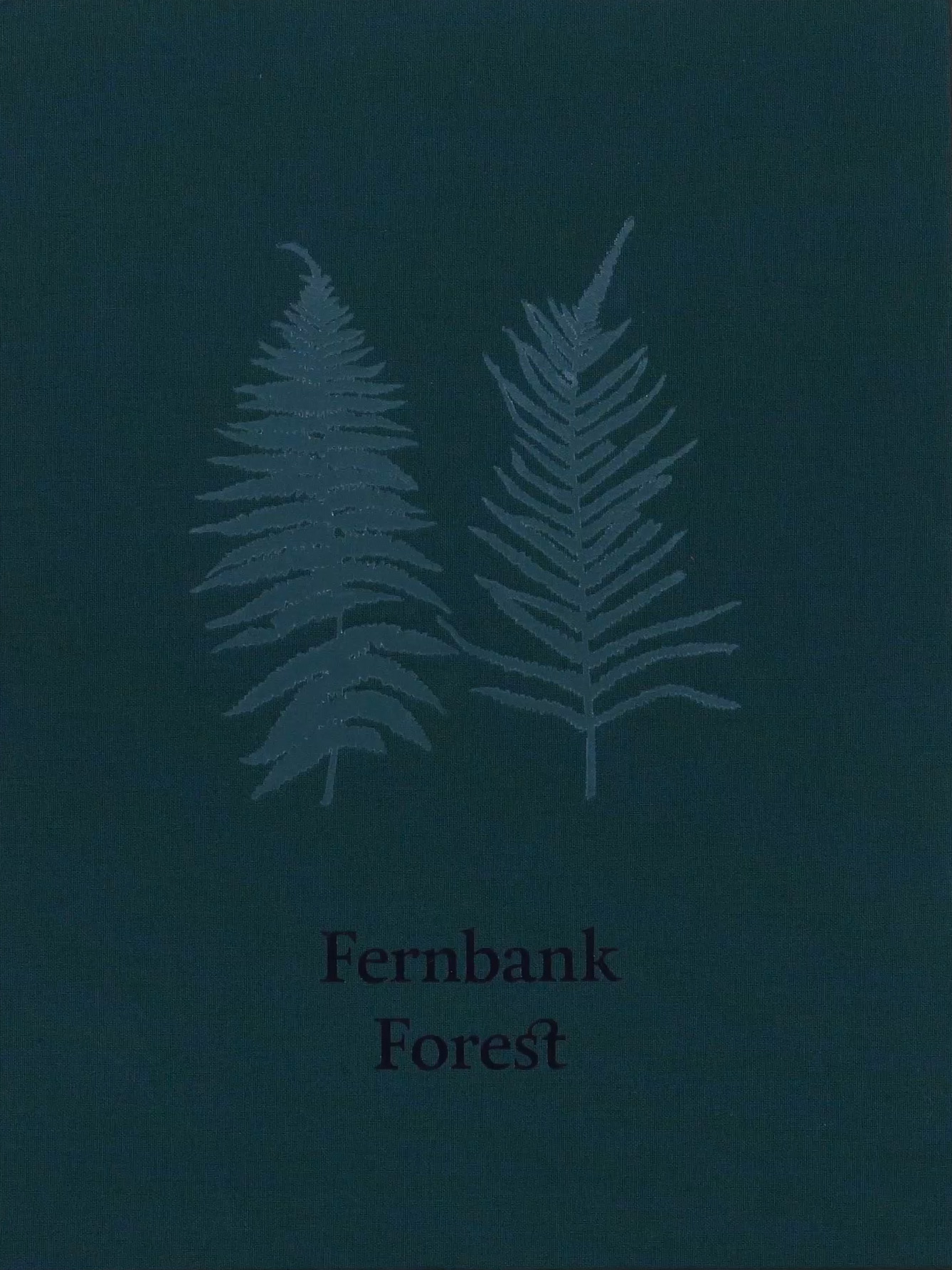 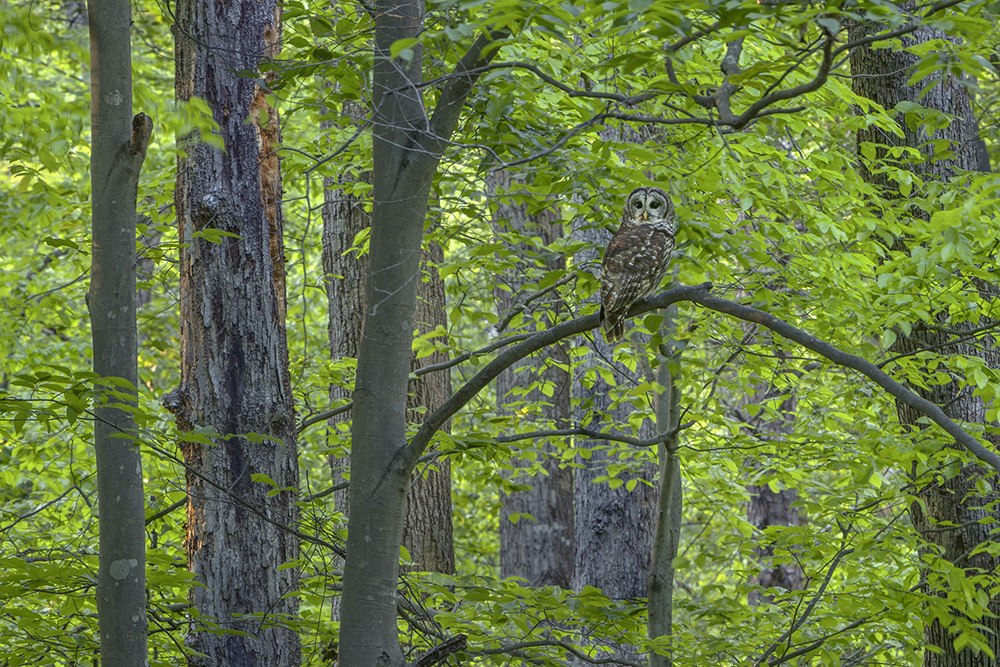 Emily Harrison, a pioneer of outdoor learning and educational reform, made the preservation of this forest her mission. An extraordinary woman for her time, she earned graduate degrees in teaching and forestry to learn how to keep the woodlands on her father’s country estate in tact for current residents and future generations.  Four years after her father’s death, she established a nonprofit organization and leased the land to the DeKalb School System. A natural history museum was constructed following her death, and after the lease expired in 2012, a private institution took over the forest in order to fund an ecological assessment and subsequent restoration.  Fernbank Forest is one of largest old-growth forests in the Piedmont region and contains its own watershed clean enough to support salamanders, frogs, snakes, and macro invertebrates. For such an unspoiled area to exist in the middle of a city with a population of close to six million people is a rare gift. 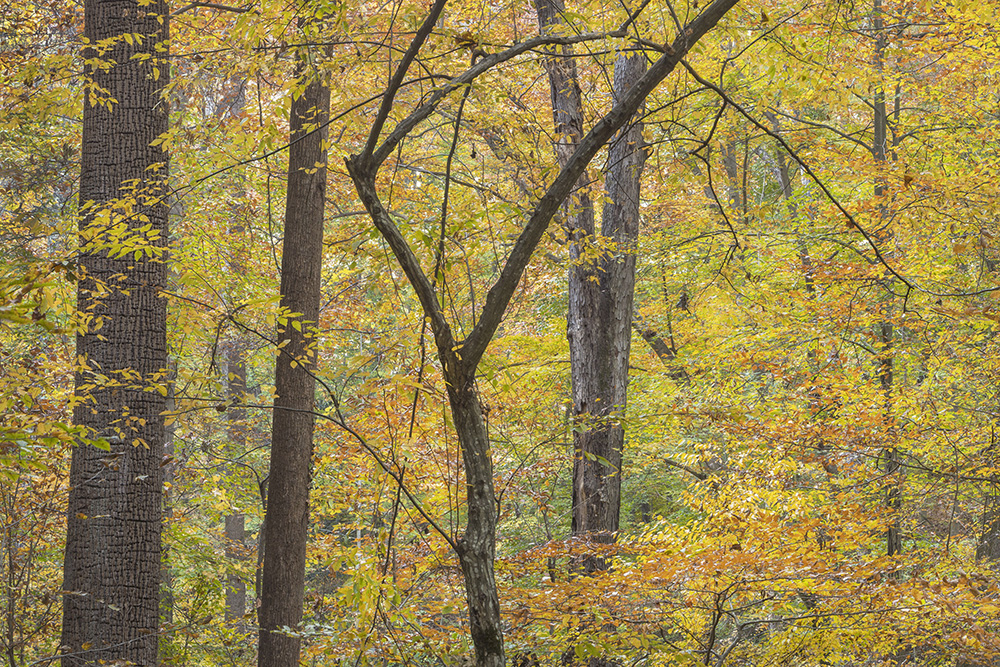 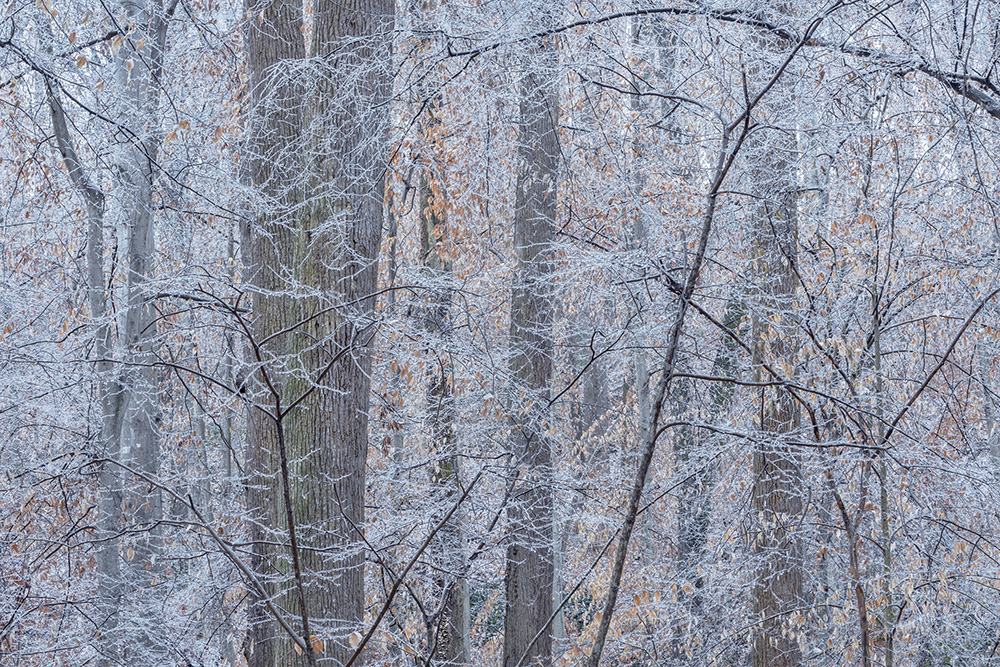 The Fernbank Museum commissioned Essick to photograph this 65-acre forest through the seasons. Bob Yellowlees, the owner of Atlanta’s Lumière Gallery, funded the book. Essick agreed to take on the project, even though the forest was small by National Park and preserve standards and had no extraordinary features. He took solace in the words of the great Southern photographer William Eggleston, who once wrote: “You can take a good picture of anything. A bad one too.” When he began photographing the Fernbank Forest, Essick had just left National Geographic after working with them for close to thirty years and had recently lost his mother.  After dropping his son at school Peter would go straight to Fernbank and was usually there by himself until midmorning.  At first he was uncertain that he would be able to produce the quality of images he was used to making in exotic locations for the Geographic, but the experience of visiting this location so frequently and under so many different conditions led to a nuanced interpretation of the landscape.  As he began to connect with its rhythms, he started to heal from his loss and was able to find new directions for his life and work. Listening to Peter speak about the transformative experience he had working on this book, it struck me why viewing the photographs touched me so deeply, especially now that our lives have collectively changed so dramatically and we are staying and photographing closer to home.  We are all experiencing loss these days and have to find new ways to live and things to appreciate.  This book inspired me to see my own backyard with fresh eyes and is the perfect companion in these challenging times. 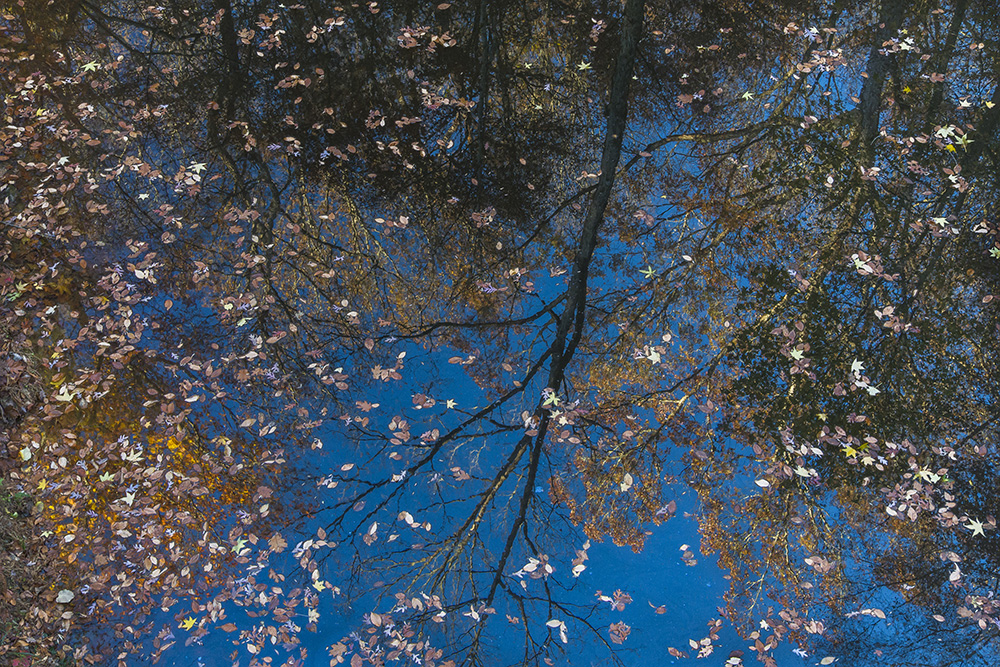 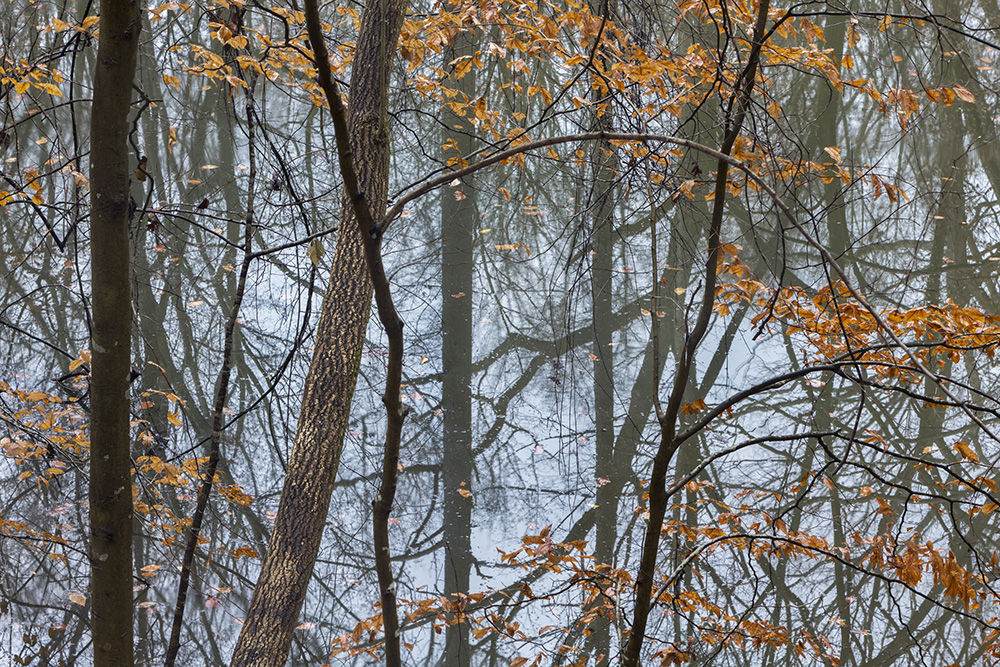 Many American landscape photographers, from Carleton Watkins to Robert Adams, have influenced Essick’s work.  He greatly admires Elliot Porter’s concept of the intimate landscape and how this masterful photographer handled color in nature. However, in an effort to create a more contemporary visual record of his experiences, Peter wanted to both acknowledge and move beyond these influences and the book does this beautifully. Though images like “Huntemann Pond” and “Forest and Pond” echo Elliot’s photographs in the handling of light and color, I could sense that Peter had experienced his own unique epiphanies and connected with the spirit of this gentle woodland. 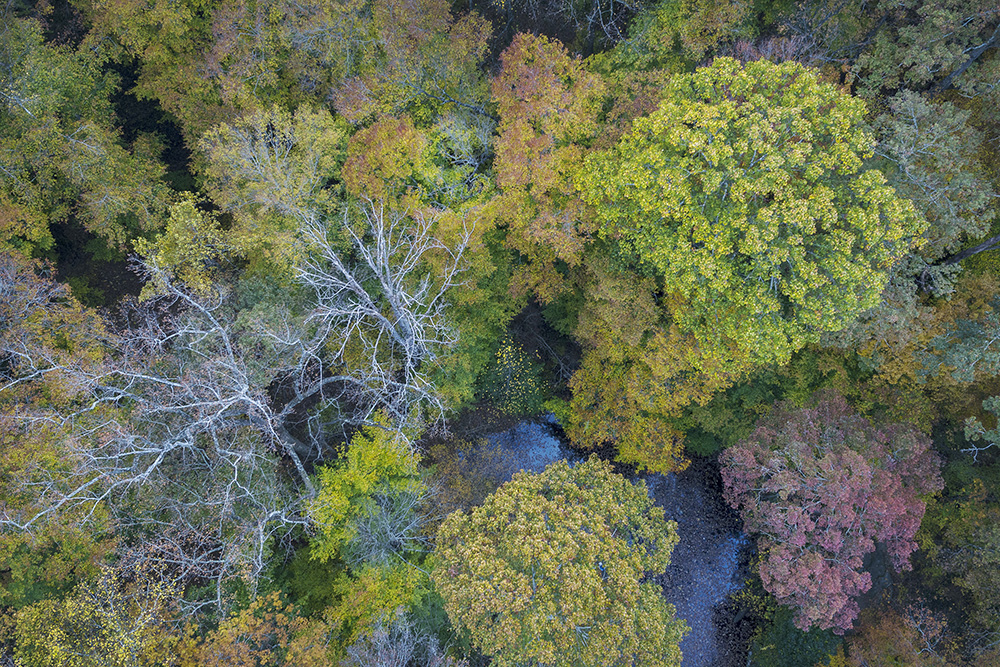 But relating to the forest on ground level alone would not tell the whole story of Fernbank. The trees form a magnificent canopy and Peter did not feel that single images from his DSLR camera were capable of expressing its full grandeur, so he purchased a drone and learned how to make aerial images.  The drone also allowed him to compose an image of the forest with the Atlanta skyline behind it, which situates Ferbank in its urban surroundings. 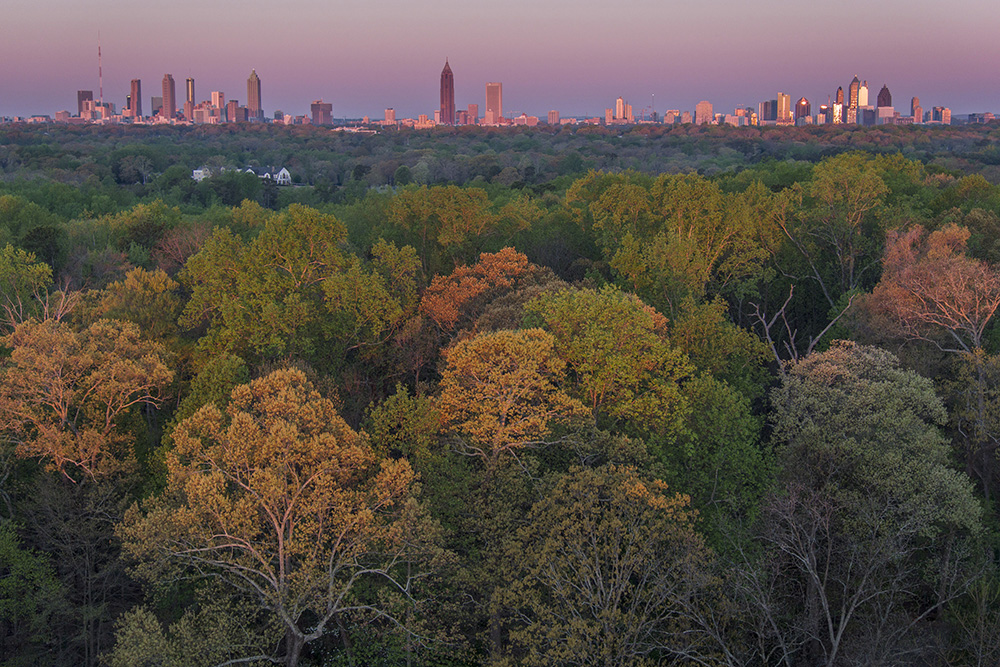 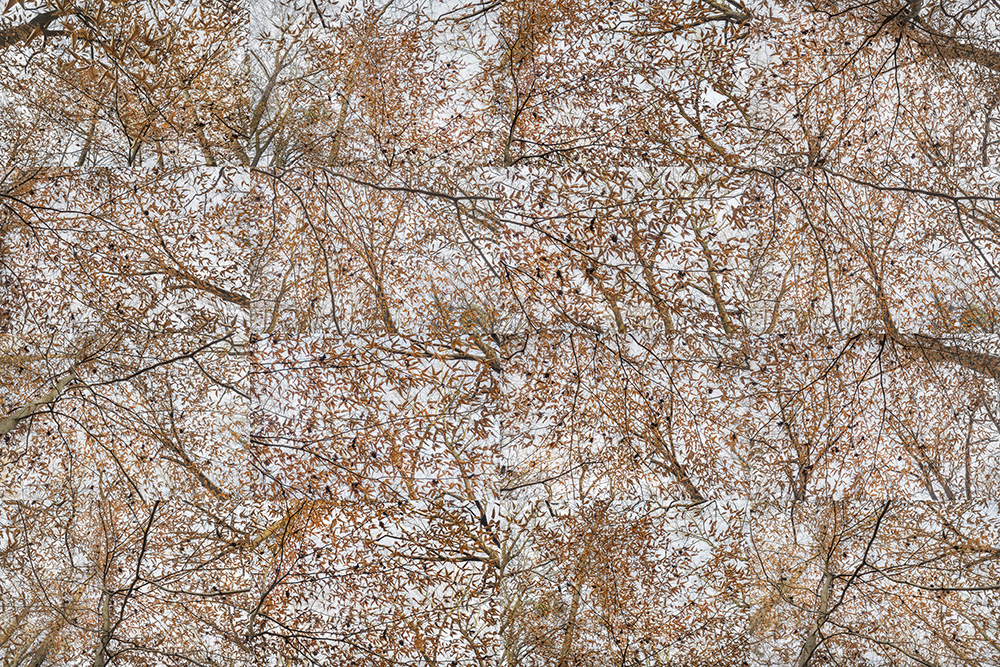 As he was culling through his photographs of parts of the forest, Peter sometimes felt that there was not one best image.  Sometimes, he told me, you just know that this is the one, but other times there are many that reveal different aspects and they are all equally good. Drawn to Ray Metzker’s composites, which were single works created from entire rolls of film that could be read both simultaneously or sequentially, he began experimenting with collages.  The individual images both relate to each other and fit into the whole, just as trees are unique and part of a forest. In the “Beach Leaves” collage, the images were made in one visit.  The forest is shown from a multitude of viewpoints much like the analytic cubists approached their subjects, though the way the individual images are arranged, the consistent light, and the reduced color palette, all emphasize the whole of the canopy rather than fragmented experiences of it.  Many of the collages have a pronounced rhythm to them that calls to mind the hours of a day or the duration of a season.  The Huntemann Pond collage was made over a period of weeks under varying light conditions. Sometimes Essick accentuated what was on the surface of the water and at other times he focused on the reflections. The images are strategically arranged with leaves as focal points and the variation in lighting moves the eye around the composition. Though it is still portrays a unified experience, the rich complexity of this ordinary pond is emphasized over its sameness.   The collage pays homage to both Porter and Metzger but is ultimately flavored by Essick’s masterful handling of light. 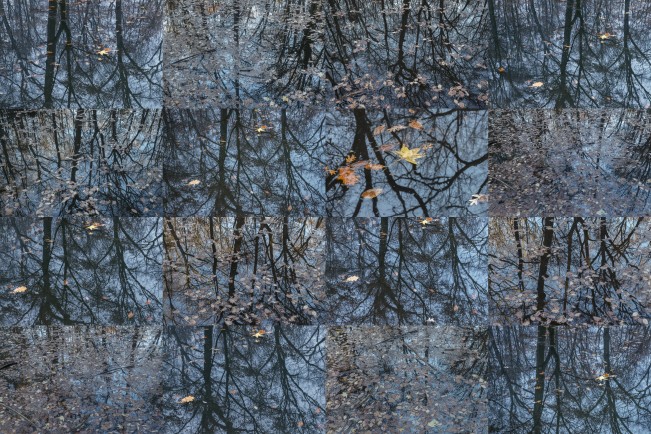 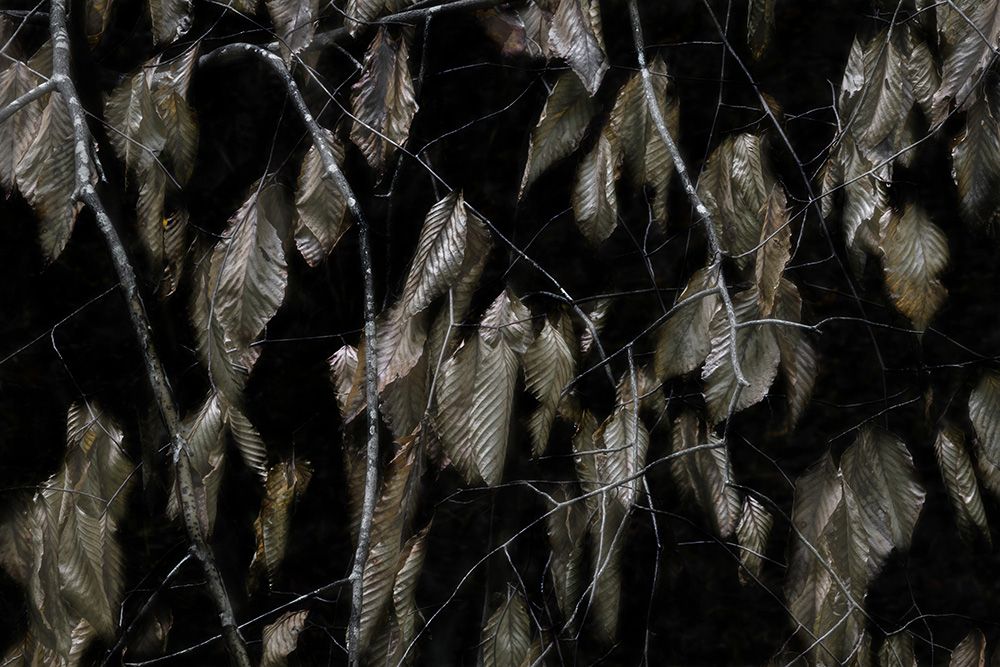 Another example of Essick’s expert handling of mood and light is evident in “Beach Leaves.” The leaves, nearing the end of their life cycle, are strikingly illuminated in a Rembrandt-like fashion against a black background, which evokes a sense of mortality with breathtaking elegance.  Another formally compelling image is of a dead leaf in a frozen pond. To elevate such a subject to high art is a prime example of the democratization of subject matter. 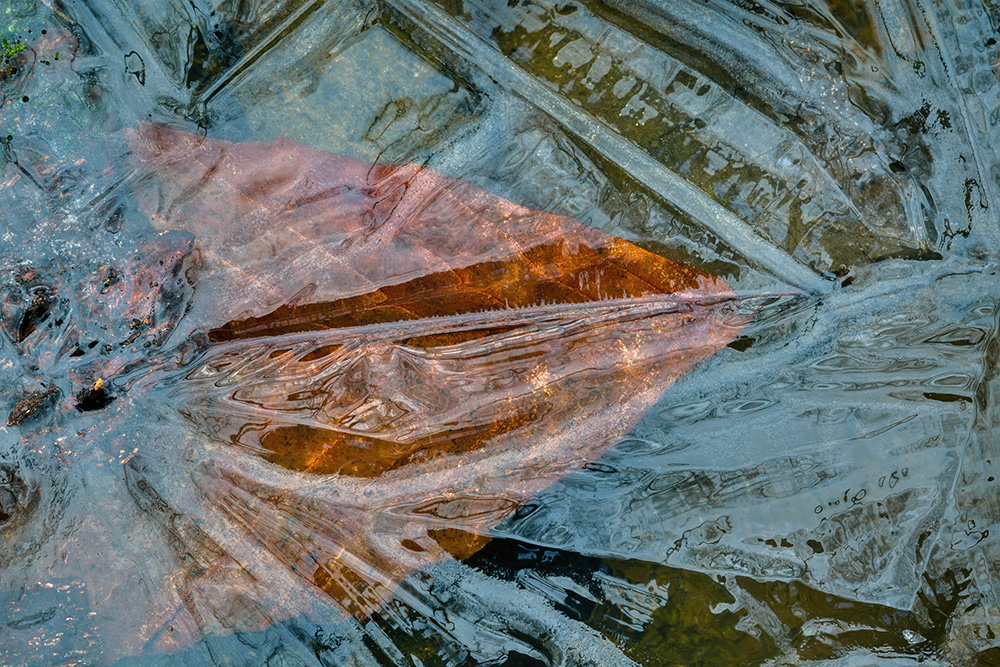 Much of what interests us in forests is on a smaller scale, so several close up images are included as well.  The book contains the a photograph of the 6-8 inch trout lily shown below, some turkey tail fungi, a two-lined salamander, a pair of blue jays, an eastern bluebird, and a close up of a green frog that almost jumps off the page. 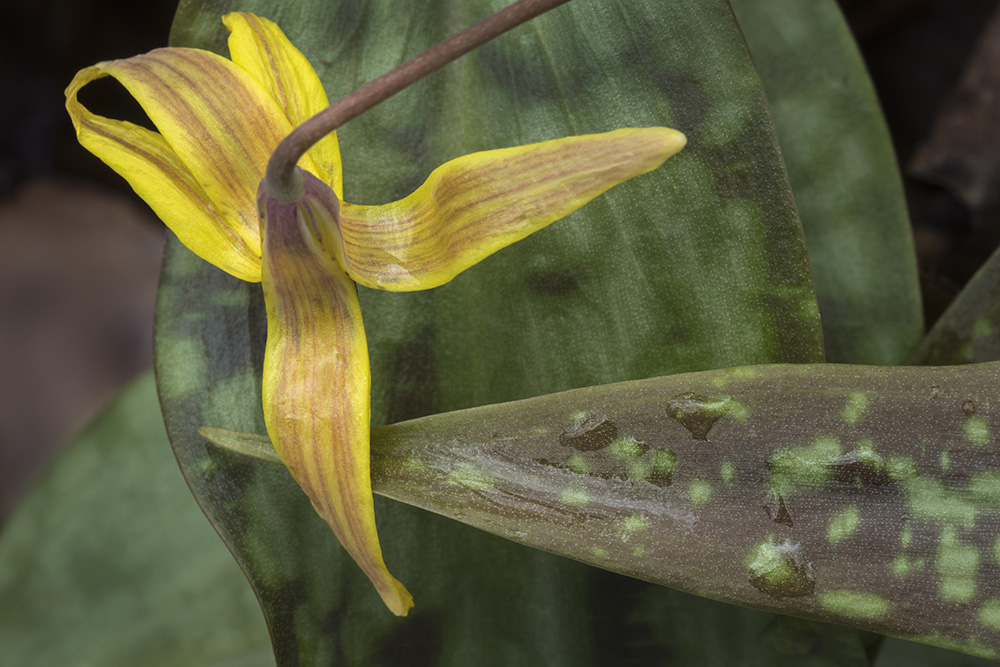 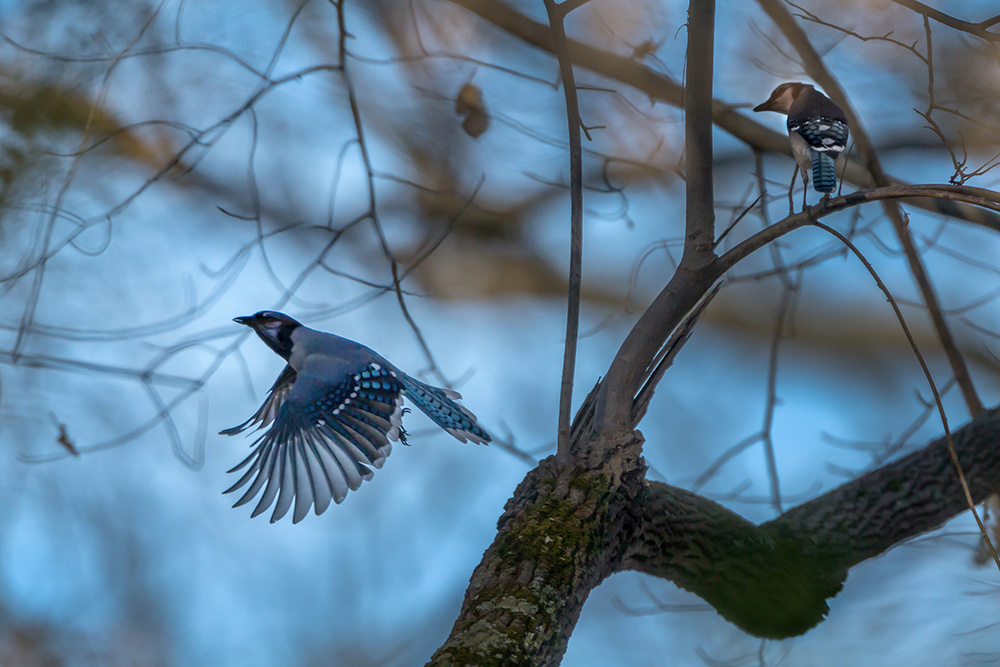 Though Essick has a strong background in documentary photography, as is evidenced by his climate change and technological work, this book is not a mere document of the Fernbank Forest.  It artistically conveys the enduring spirit of the landscape and its denizens and has much to teach the viewer about valuing and connecting with the ordinary, which is ultimately extraordinary when you look closely, vary your perspective and appreciate all the nuances nature has to offer as Peter Essick has done. 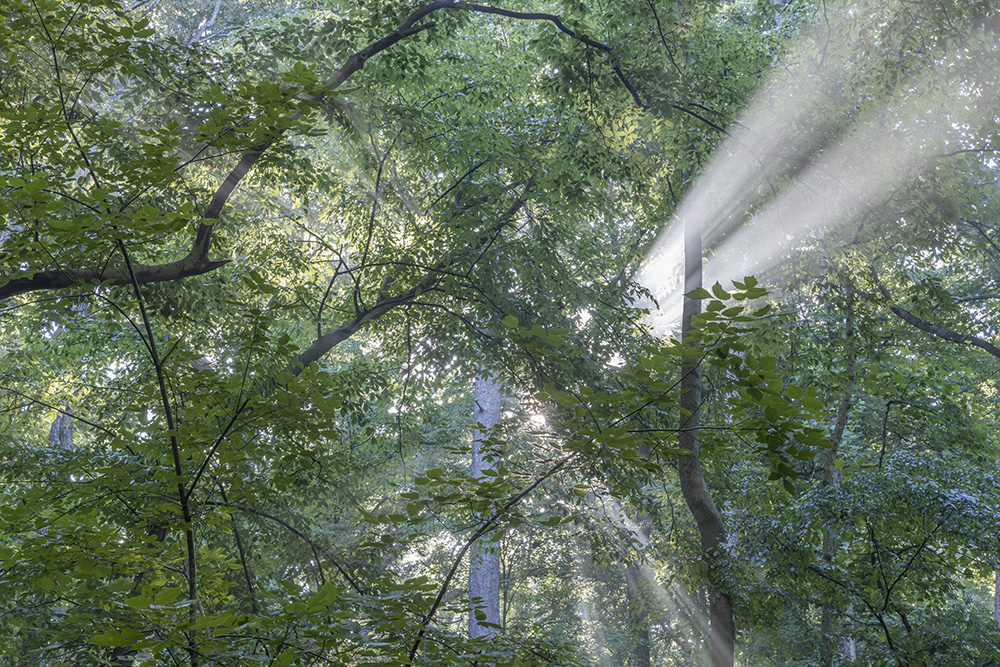