Politics of the Kitchen: Santina Amato by Barbara Ciurej and Lindsay LochmanApril 13, 2021 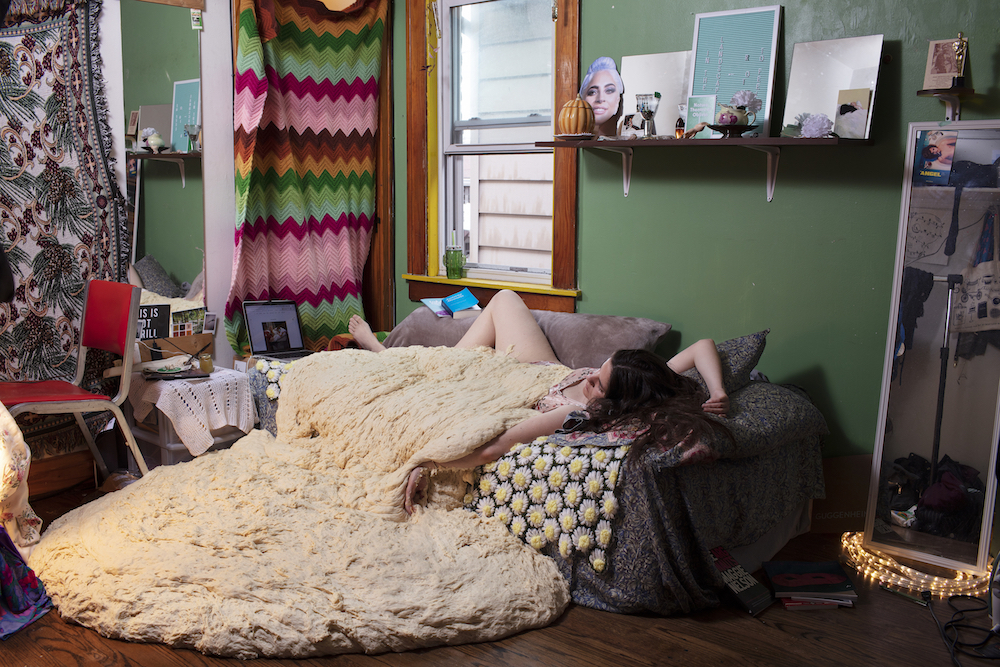 Angeliki, 2019 ©Santina Amato. An ongoing series capturing portraits of women with their weight in dough within their domestic environments, in various mediums including photography and video. (Photo Marzena Abrahamik)

To observe the humble ingredients of flour, salt, water and yeast mingle, burble, rise and transform is to witness the mysteries of life itself. Santina Amato’s visceral work places us inextricably into relationship with this mix. She writes: “There is a peak moment when dough is voluptuous, full, and ripe, just before it begins to ‘die’”.

From the sticky work of domesticity to the ooze of desire and the magnitude of life forces, Amato’s images expose hidden realms. She brings intimate processes into the bright light of familiar domestic space. Bread is life and making bread is both art and science. As Amato evokes in her work, it is also a point of origin in an expansive ecosystem.

I work in a wide range of mediums and formats from painting to sewn sculptures, creating installations, sculptures, video and photographic works, and live performances. I am interested in the physical nature of various materials that relate back to the domestic environment, such as bread dough, bed sheets, and fresh produce, and the labor processes used when working with these materials. My practice embraces the challenge of presenting a material that is so heavily associated and identified with the domestic environment, within a new context by attempting to remove any connotations from its original associations. Of course my attempts fail because the materials themselves have a strong relationship to the domestic, some having been born within it, such as bread dough. I see this as a similar battle to my position in the world having been raised within a traditional immigrant family, where gender roles were clearly in place and the domestic stage was set for me to exist within it from birth, in a very particular and expected way.

As a material focus, my particular interest in using bread dough within my installations, sculptures, video and photographic works, and in particular, live settings, is its life cycle; once activated by warm water and sugar, the cells of yeast split and divide, similarly to when an egg is fertilized by sperm. There is a peak moment when dough is voluptuous, full, and ripe, just before it begins to ‘die’.

This attraction to the materiality of dough relates back to my childhood growing up within an immigrant Italian household in Australia, where dough was no foreign matter and gender roles were clearly in place. My first memory and experience of femininity and the power of creation (and potentially female desire) was watching my mother knead this soft, white, voluptuous material. Folding it over and onto itself, pushing her whole body towards it  back and forth, back and forth – while steering the dough with her hands, she transformed it from flour and water into our existence as a living organism, to be consumed by our bodies, via our mouths.

By observing the similarities in the life processes of dough and my own body – the way it moves, the way it feels, the way it is observed by others, the way it is perceived by the self, its temporal relationship to the world and to others – I attempt to translate the complexities associated with my own experience of being female, my relationship to my own body and those that I desire, female heterosexuality, desire, erotica, intimacy, and aging, through an interdisciplinary artistic dialogue. 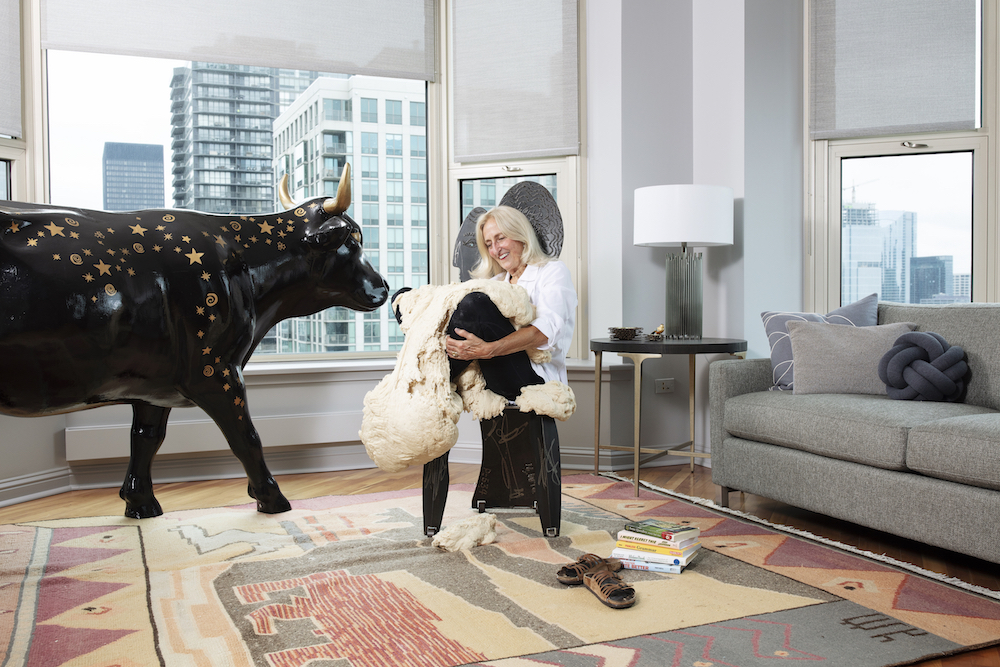 Carol, 2019 ©Santina Amato, from from Portraits of Women with Their Weight in Dough (Photo Marzena Abrahamik) 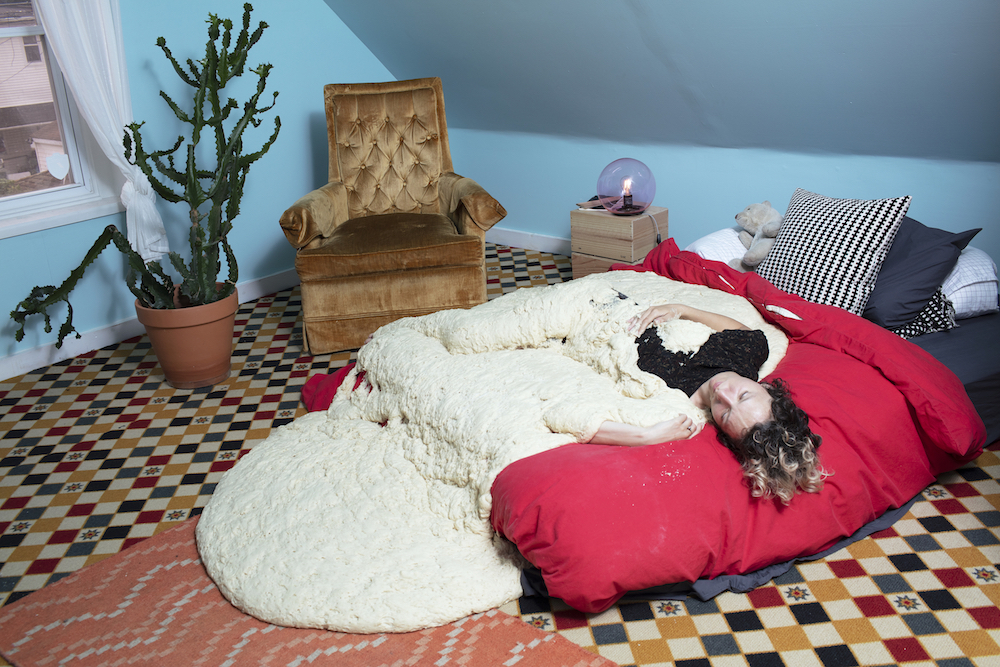 Deidre, 2019. ©Santina Amato from Portraits of Women with Their Weight in Dough (Photo Marzena Abrahamik) 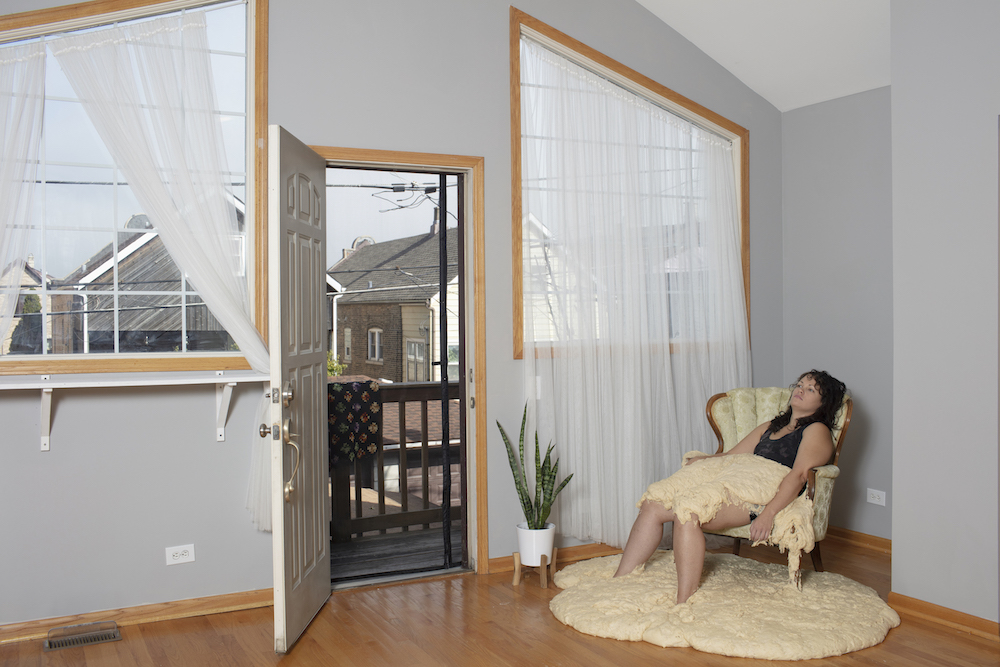 Jan, 2019. ©Santina Amato from Portraits of Women with Their Weight in Dough (Photo Marzena Abrahamik) 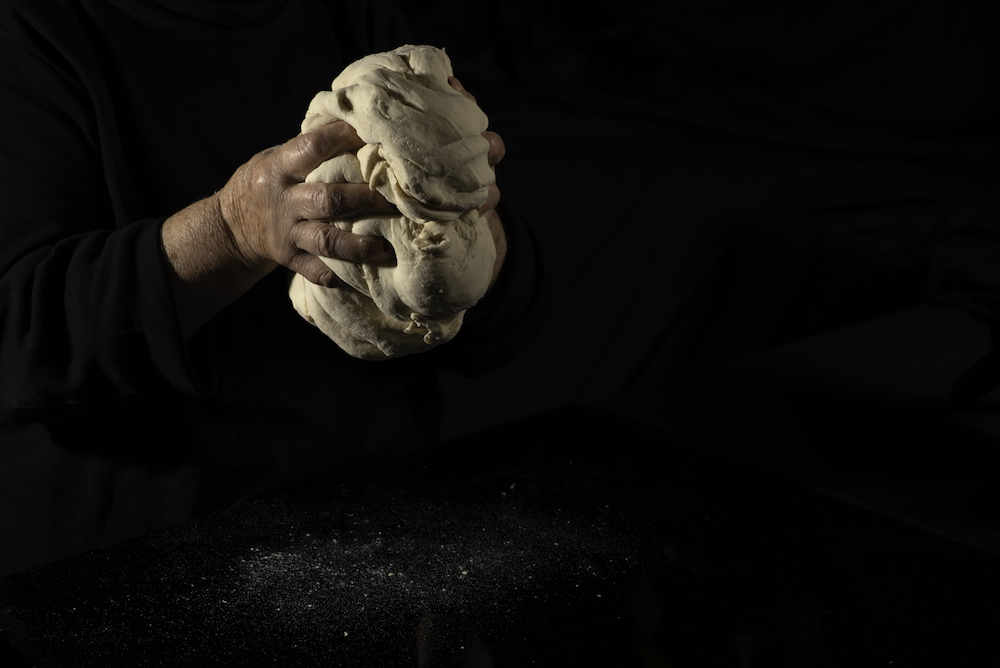 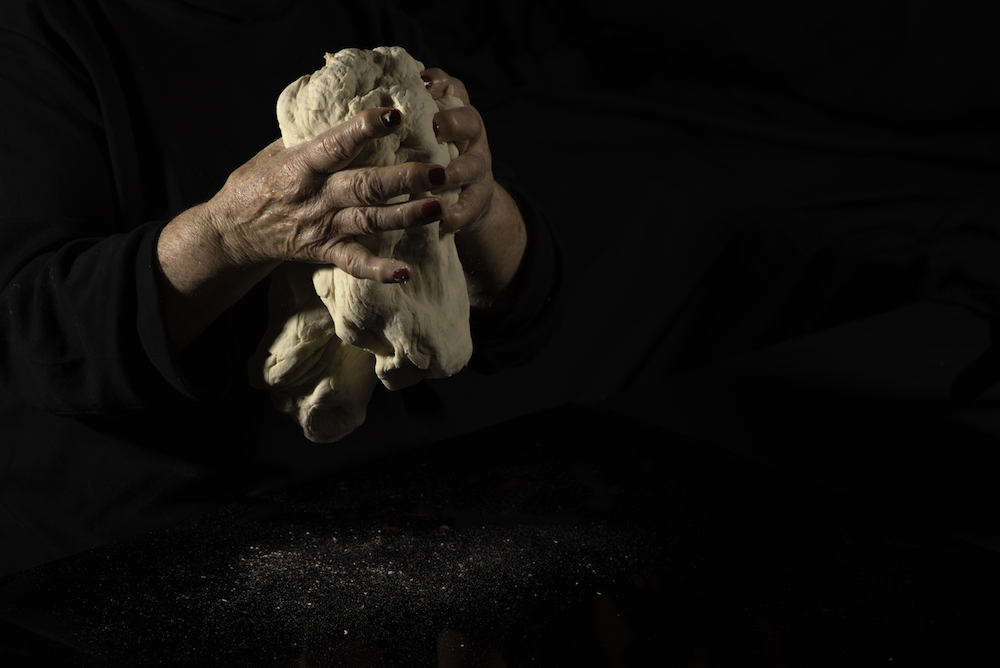 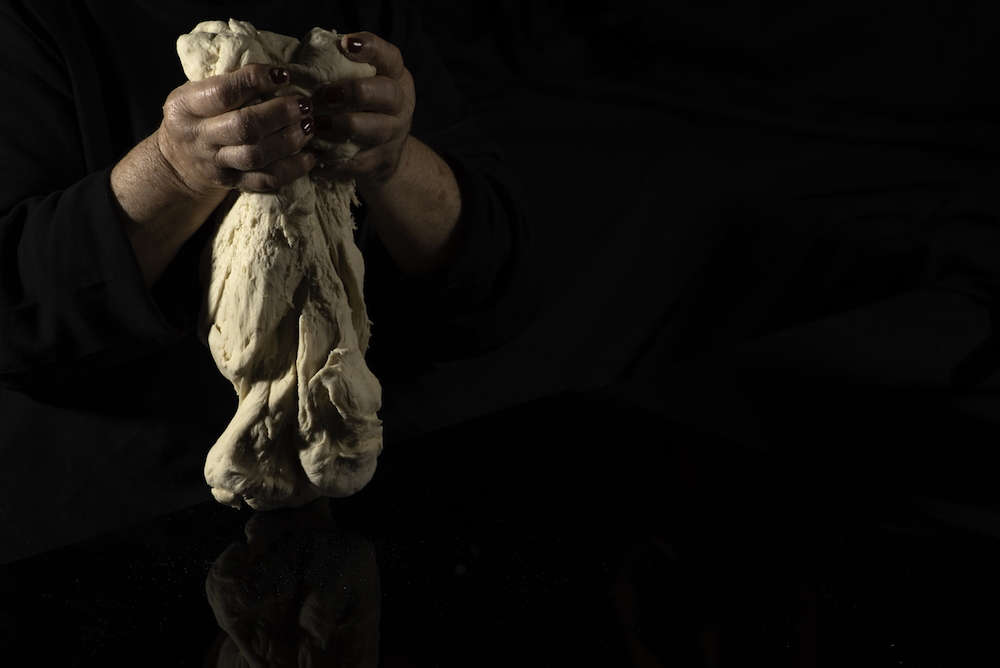 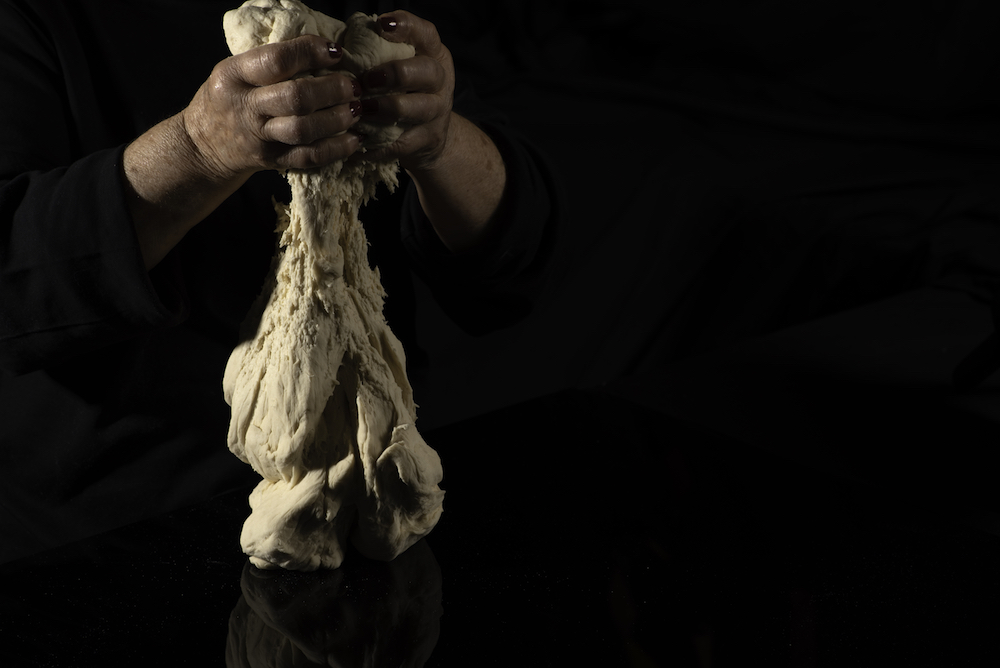 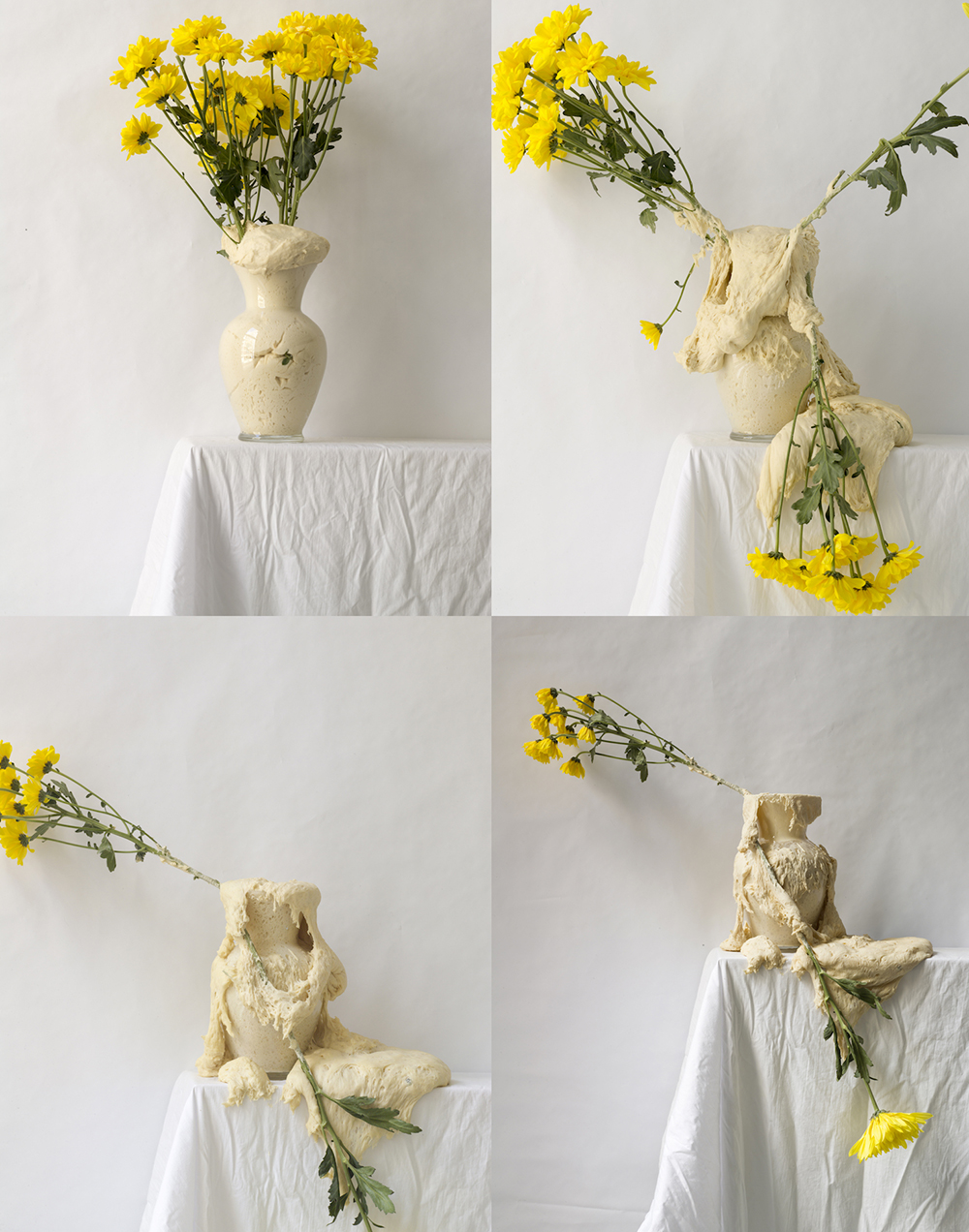 (Dough Still With Flowers & Fruit), 2016 Video Duration 58:00 ©Santina Amato. This video and photographic series introduces dough interacting with inanimate objects, allowing the dough to claim its environment as it rises out of and around objects that it eventually consumes.

Midnight Dinner, 2016 Video Duration 2:29 ©Santina Amato. Two Channel video installation. Inspired by an online dating experience, this video reenacts a midnight dinner that was chatted about through text messaging and captures the destruction between the non-reality space of online communications and the reality of meeting in person.

Santina Amato was born in Australia to Italian immigrants, and has lived and worked in the USA since 2010. She received an MFA (Photography) from the School of the Art Institute of Chicago (2017) and has been supported by the Illinois Arts Council Agency, the City of Chicago’s Department of Cultural Affairs & Special Events and the Australian Council for the Arts. Exhibitions and screenings include Samek Art Museum, Bucknell University, Lewisburg, PA, The Arts Club of Chicago, Chicago, IL, Here Arts Center, NYC, Governors Island Art Fair, NYC and Detroit International Videonale, Kuntshalle Detroit Museum of Contemporary Art, MI. Amato has held positions as Fellow and Artist-in-Residence at MOCA Tucson supported by the Illinois Arts Council Agency (IACA), MASS MoCA in North Adams, MA supported by the City of Chicago’s DCASE, 2018 IAP Grant, Crosstown Arts, Memphis, TN, Process Park, Artslant and Chashama, Pine Plains, NY, Filed/Work Program, Chicago Artist Coalition, Chicago, IL.

Amato Founded and Directed Moving_Image_00:00, a biannual festival in Chicago of moving image works by Chicago-based artists between 2016-2019. Her work is part of a collective photographic portfolio at The Joan Flasch Artists’ Book Collection and The Art Institute of Chicago and video collection at the Victorian College of the Arts, Melbourne, Australia.

Works created in 2019 were partially supported by the City of Chicago, Department of Cultural Affairs and Special Events 2019 Individual Artist Project Grant