Politics of the Kitchen: Dana Sherwood by Barbara Ciurej and Lindsay LochmanApril 14, 2021 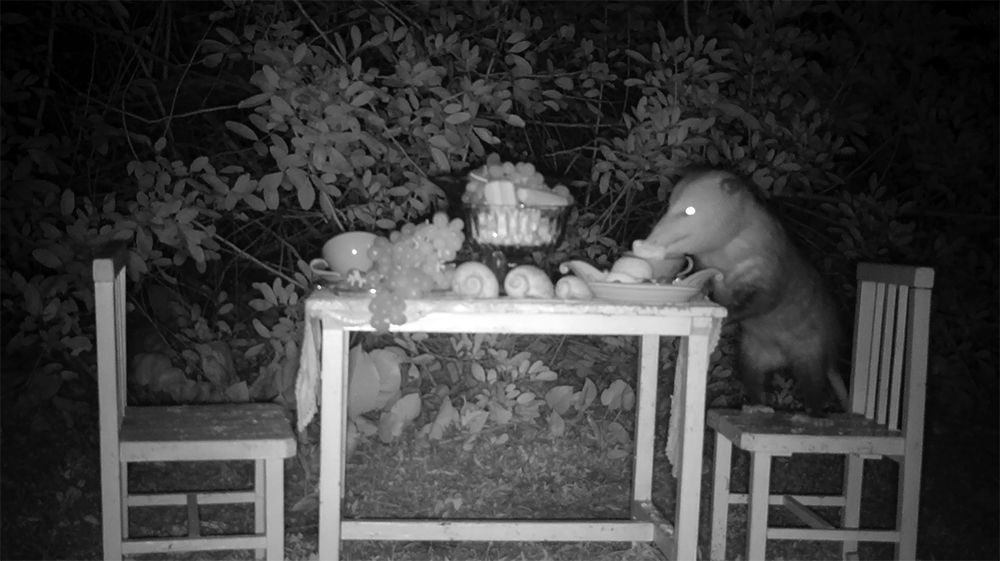 “Deep in the night we eat. In the shadows, in secret. Feeding the animal, our nature, our dark, shadow-self. Feeding the wild animals in this way creates a ritual space, the dark makes it sacred as well as secretive. Like that piece of cake, gobbled at the sink when no one was looking. It is an offering to the gods of the wilderness, those feral beings who have no truck with shame or guilt.”

Dana Sherwood prepares elaborate feasts as offerings for non-human animal guests, our nocturnal neighbors who share the land we inhabit. Night after night, she records the sumptuous banquets in dream-like videos and startling photographs with her infrared cameras.

As we peer into these night visions through Sherwood’s lens, her other-worldly sets and confections invite us into another reality. Through her patient and humorous overtures, the animals reveal themselves. The creatures upend our notions of order as they wash their paws in teacups and walk on the table. They surprise us. 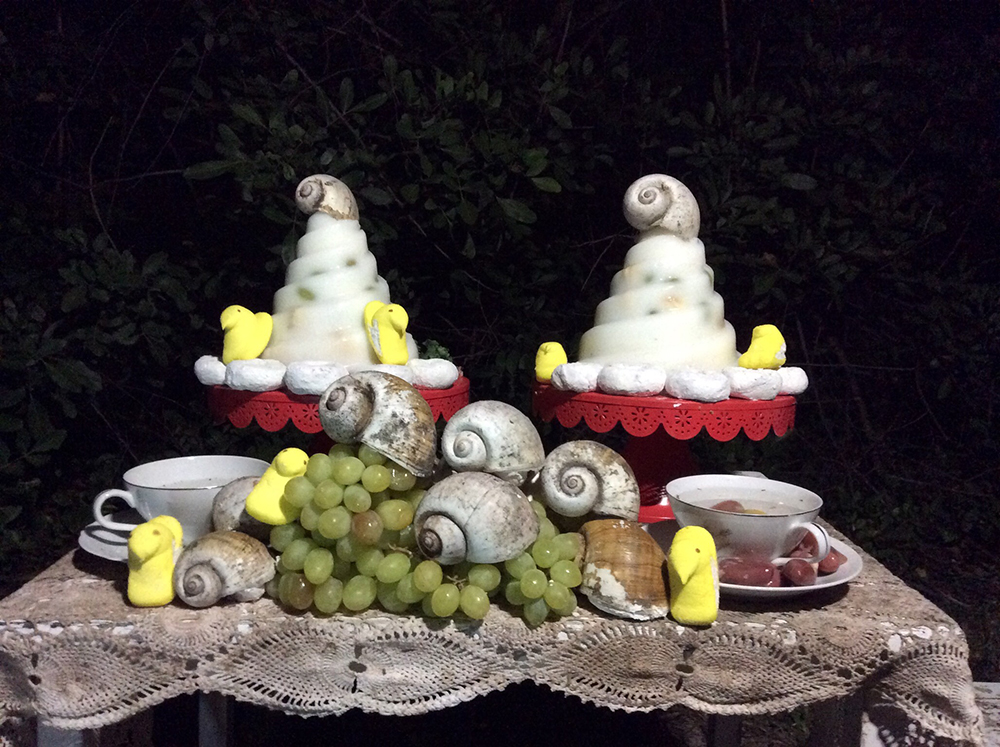 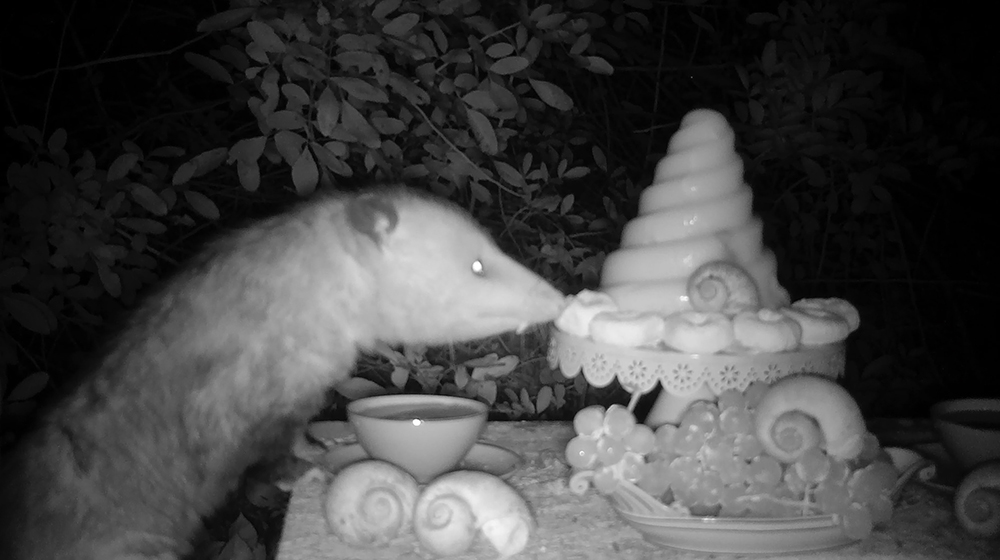 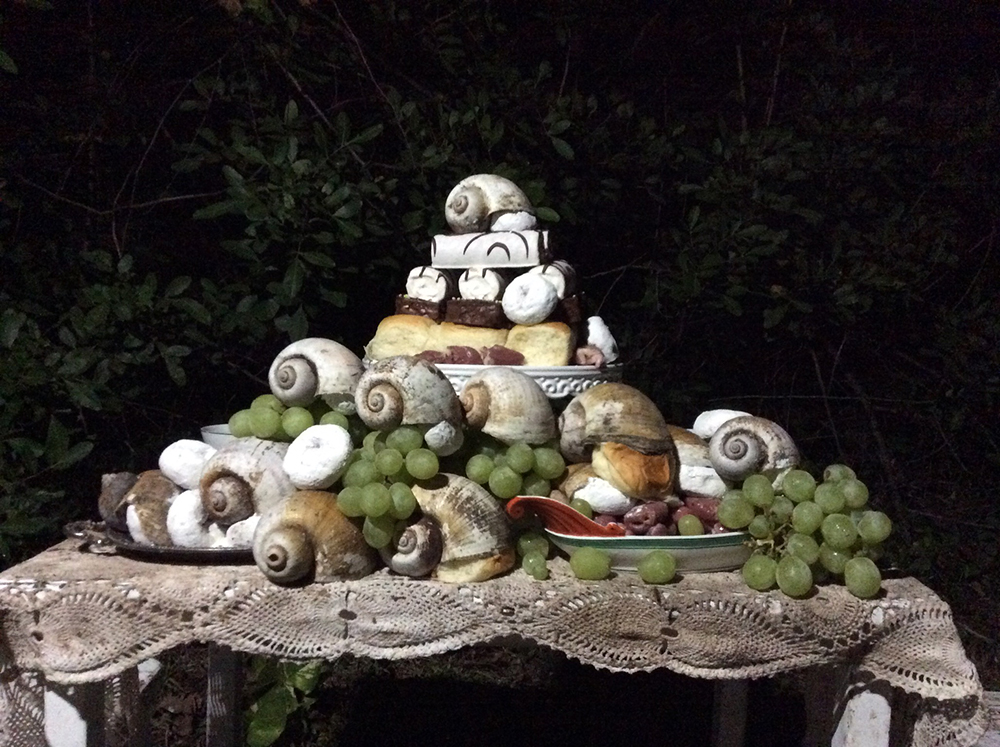 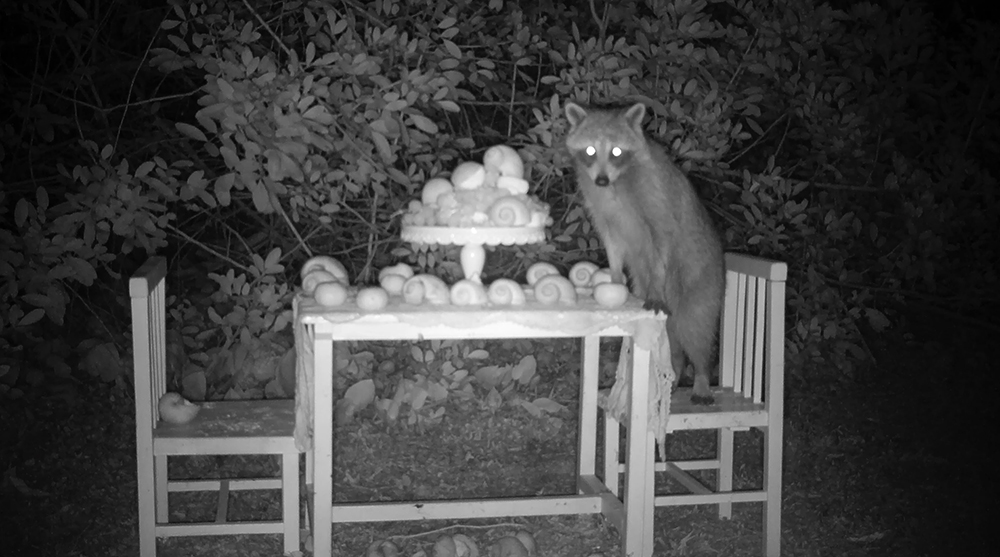 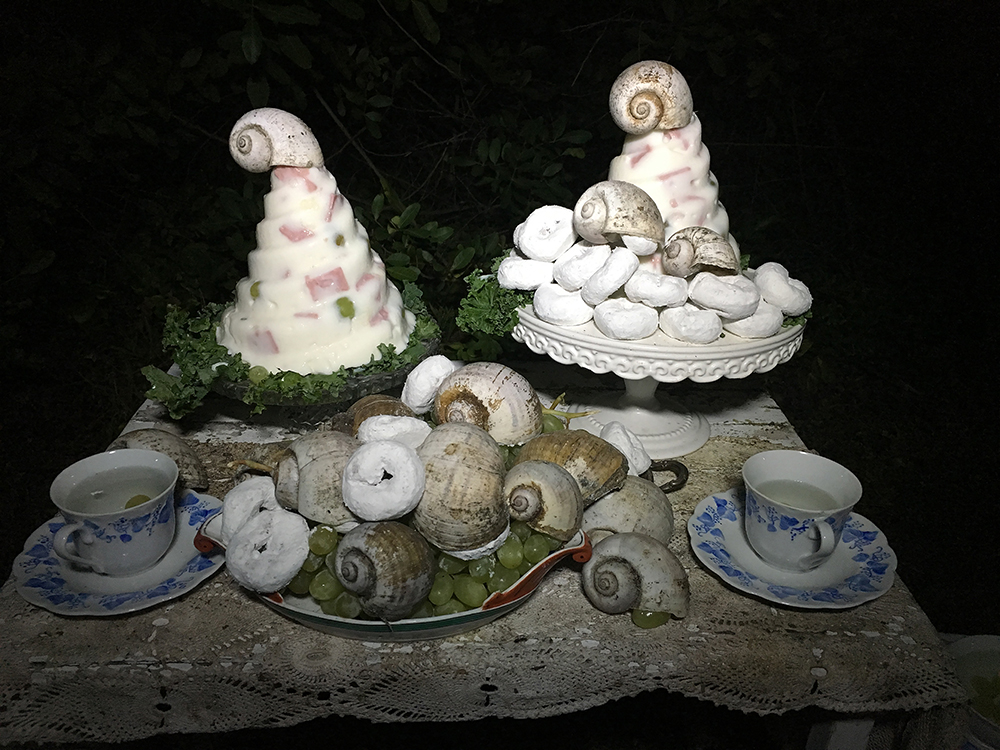 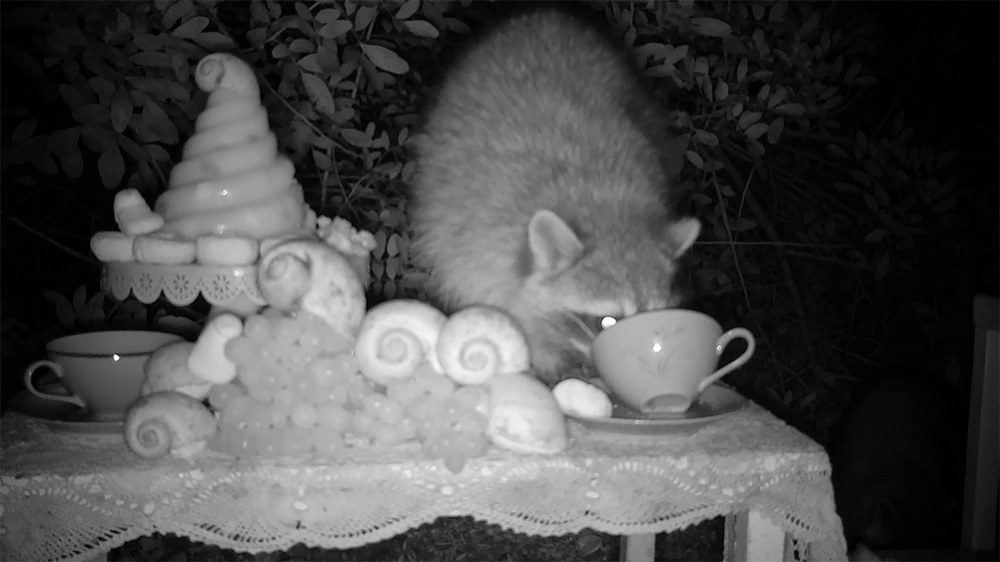 “This scene” Sherwoord explains,“with the enigmatic snails, the extravagant confections, the table and chairs; perfectly sized for raccoons and possums to sit upon, exaggerates the absurdist, anthropomorphic tendencies present in the work. And while generally speaking anthropomorphism is frowned upon as much in art as in science, it makes a lot of sense to me in terms of underscoring the post humanist gesture that has been a strong theme throughout this body of work, and turns it on its head.” 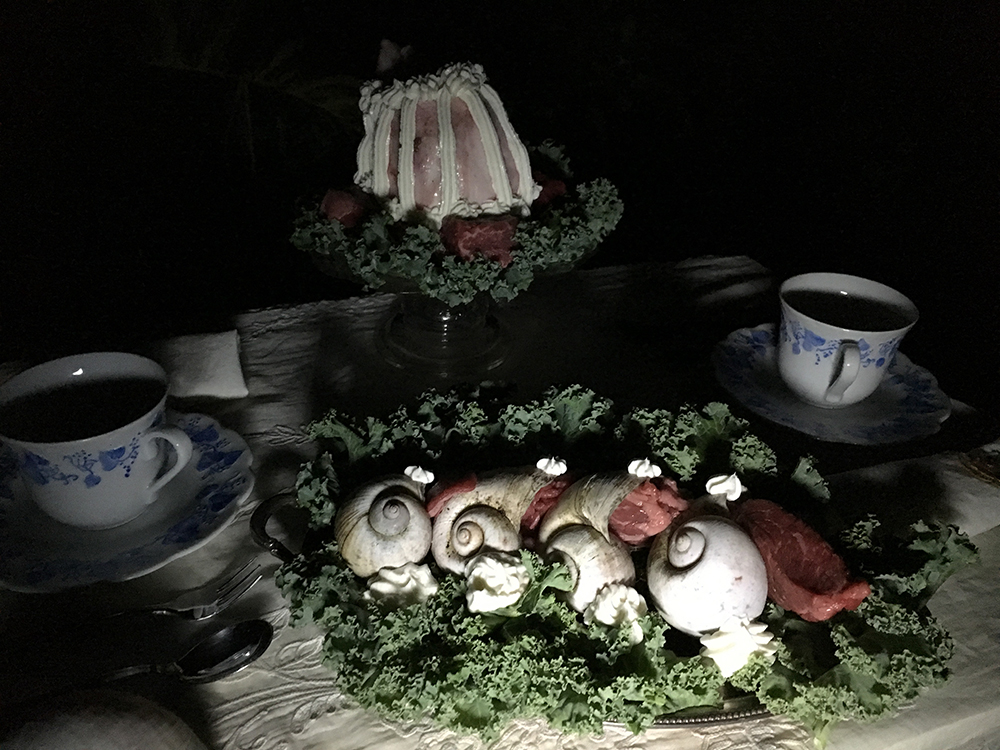 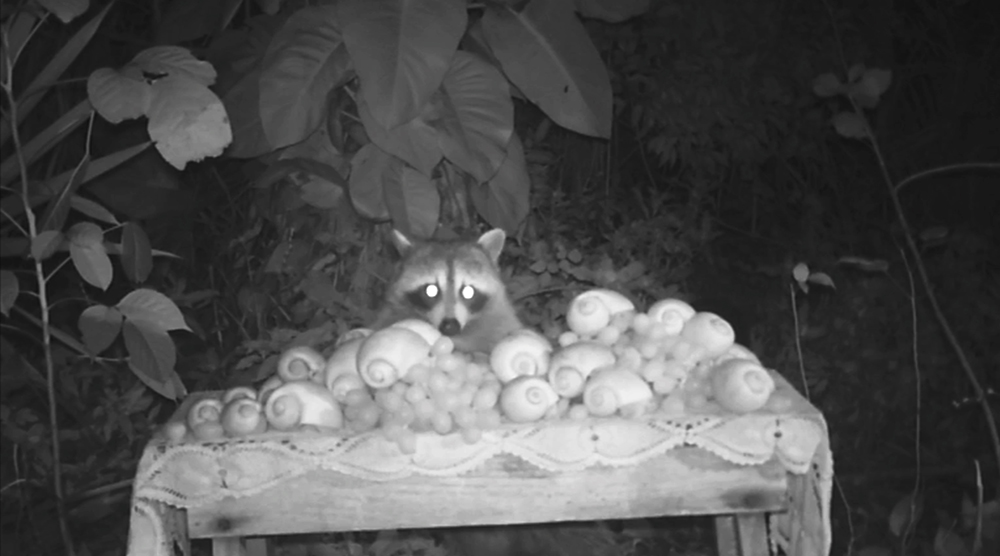 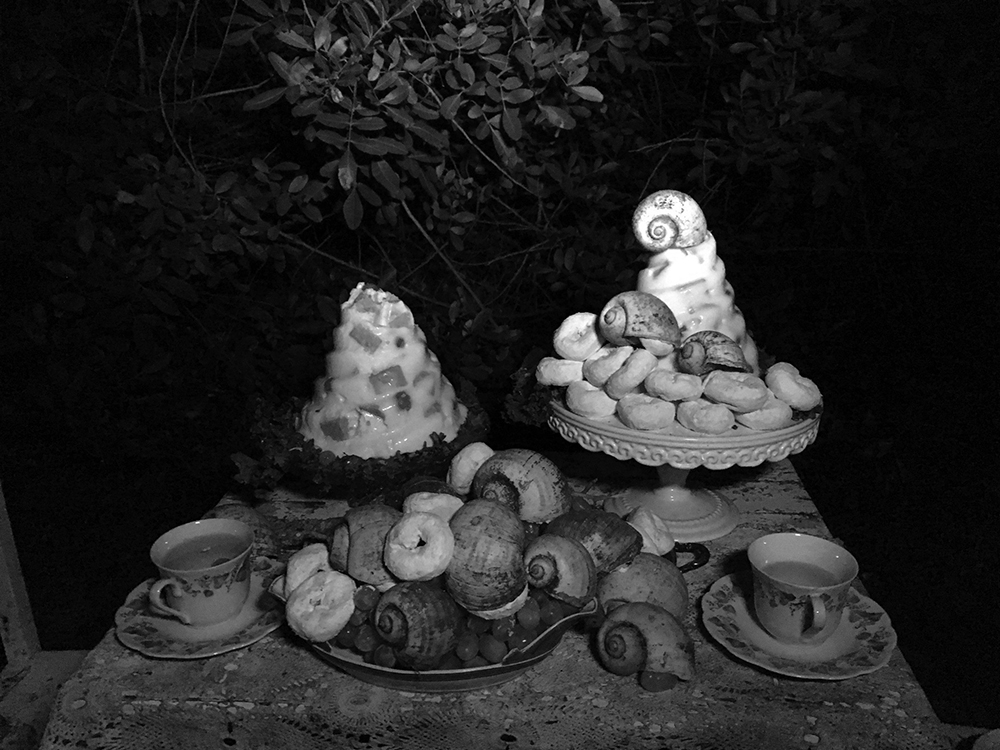 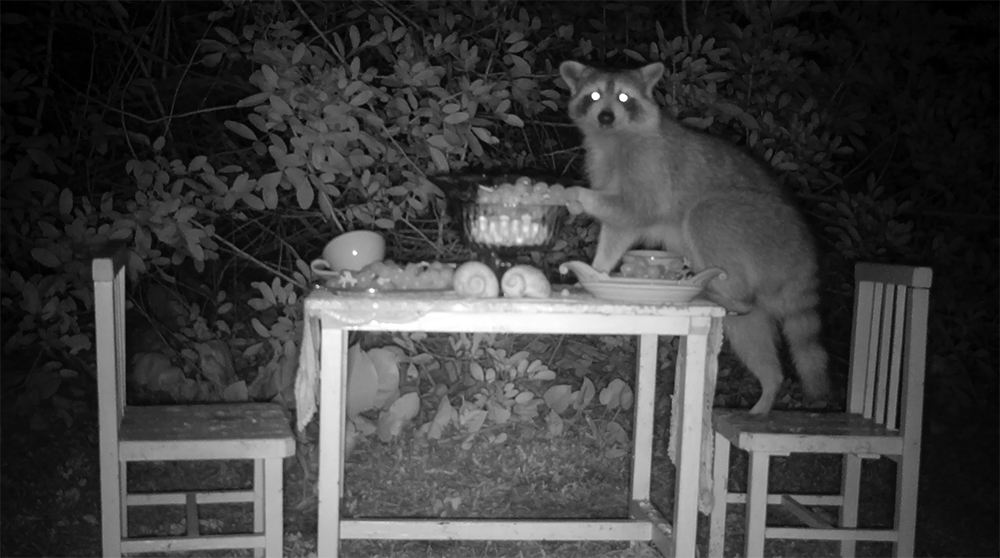 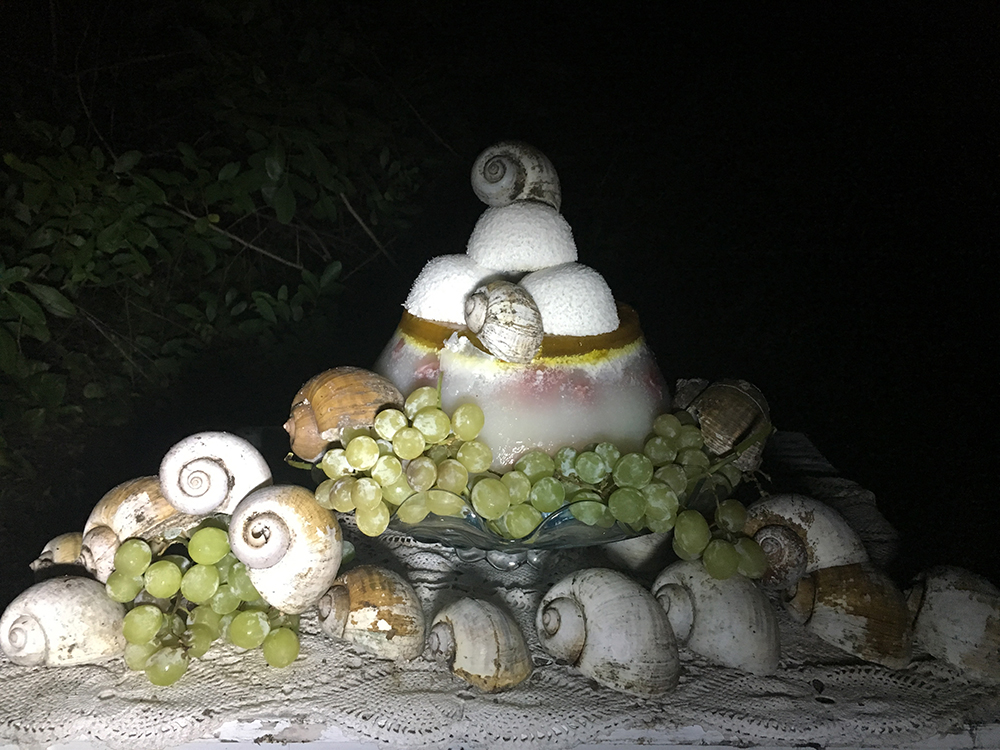 Your feasts are sumptuously prepared and styled. How does aestheticizing the banquets and cooking for the animals act as an invitation/reflection?

I think of the food as sculpture first, the medium is the food, so the aesthetic presentation of often straightforward raw material is a way to craft meaning and metaphor. The food is transmuted into offering, it is beautiful as well as physically enticing and sustaining.

Usually, it can take some time before animals begin to eat the food. Sometimes weeks will pass before anything happens out there. At first, I’m talking to myself in a way. I’m being ignored. Then, sometimes, something magical happens and animals start to appear. They can be tentative at first, but after we build a rapport and trust they start to eat. They know the time of night the food will appear and I can hear them in the bushes waiting for me to leave. There is communication, not verbal, but we are acknowledging each other and responding.

Crossing the Wild Line from dana sherwood on Vimeo.

The Wild and the Tame @Dana Sherwood

You mention developing feasts for the animal’s preferences. Did you ever feel that the animals are training you?

No, I don’t think of it in those terms. I don’t think of myself as taming or training them, and I try and demonstrate a delicate balance that avoids colonial traps while remaining aware of the existence of those hierarchical systems that color our world.

How does the role and ethics of surveillance factor into your work? (And at the risk of asking the tired question, what cameras and set up do you use to capture these scenes)

For me, surveillance always represents the male gaze and the systems of oppression they represent. The othering and dehumanizing, objectification, domestication and general destruction this planet and its inhabitants have experienced under white supremacy. As a white, human female I am privileged yet exploited. By working with the animals in this way, I am watching them, and I am learning so so much from them. I am changed by these encounters. They demonstrate their culture, their wildness and they decide whether or not to participate. They are not my performers, they are my teachers. That is why it is so important to document the feasting as well as the “failures”. When they don’t show up I am just as interested as when they do. I think of it as seeing in the dark, of navigating new ways of viewing the world and different perspectives without trying to be the leader, to feel my way in the unknown using intuition and chaos as a guide to the wildness.

I use Browning Patriot and Recon Force trail cameras. They are generally used by hunters and scientists to track animals in the wild. They are weatherproof, battery powered noiseless and use infrared technology for night vision without emitting any light.

Dana Sherwood is an American artist whose diverse practice explores the relationship between humans and the natural world in order to understand culture and behavior in a changing environment.  In her work, nature, often in the form of non-human animals, plays a complex role as both subject and collaborator, asserting its presence and subverting the artists’ perceived control. Sherwood relies upon her own style of magical-realism to portray contact between human and non-human animals as a tool to understand culture and behavior and more importantly to recognize the interconnectedness of our ecosystem. Her sculptures, videos, and paintings depict ritualized feedings created for animals who live on the frontiers of human civilization such as raccoons, possums, and foxes as well as for our close companion species like horses and dogs. She experiments over days and nights serving them decadent cakes, sculpted gelatin molds, and raw meats for them to enjoy, capturing their indulgence on film and making paintings of the encounters. The animals assert their presence and desires as the work reflects on the Anthropocene, the current geological epoch in which human activity has caused substantial, irreversible damage to the natural world. The extended culinary conversation results in a body of work that is paradoxically enchanted, supernatural and scientific at the same time.

Sherwood will have her first solo museum exhibition at the Florence Griswold Museum in 2022.