Lenscratch: Looking Back and Looking Forward by Aline SmithsonDecember 31, 2010

I spend a lot of time showcasing other people’s work, on Lenscratch and in my classes. Unless I have a show to promote, I try to confine my own achievements to Facebook or an occasional mention on Lenscratch, but I am thanking you in advance for allowing me to look back at 2010, revisit the work I have created this year, take a look at what some of my favorite things, appreciate the good things that have come my way, and maybe set some goals for next year.

I decided to lay low this year…not attend any portfolio reviews or submit to too many competitions, concentrating on making new work, preparing for exhibitions, and doing more curating. I had the good fortune to have a solo exhibition at the Tilt Gallery in Arizona in Phoenix and be asked to join the gallery roster, I had solo exhibition at the Griffin Museum in Boston in April and met or reconnected with the wonderful photography community there, and had the amazing opportunity to have a solo show in Barcelona at Galeria Tagomago in September, who later took my work to Paris. Along with having work in many group exhibitions, it came as a complete surprise to me to be featured in a variety of amazing publications this fall including Fraction Magazine, Visura Magazine, Rangefinder Magazine, Soura Magazine (the only fine art photo magazine in the middle east), Liberation Newspaper in Paris, Ragazine, SHOTS Magazine, Pictory Magazine, and Two Way Lens, and most recently (yesterday) on PDN. I was also delighted to participate in the wonderful program, Collect.Give and have my image sell out. I am so grateful to all who made these wonderful events possible.

This good fortune, coming at a time when I wasn’t promoting a new project, made me realize that if you work hard and keep at it, that eventually the photo world will find you. There is the adage that when you learn something, you should teach it, and when you are given something, give something back, and I truly hope that I do that.

Now for some favorites….

BEST PROFILE PIC on FACEBOOK
From Oliver Laude–he didn’t take the photo, but I love it anyway. 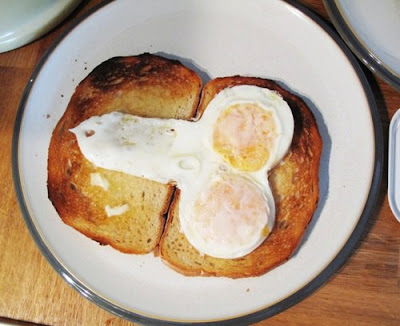 MOST AMAZING FELLOW BLOGGERS AND EDITORS
We don’t do this in a vacuum, and for the most part, we don’t get paid a nickel for the many, many hours we spend promoting other people’s work, so I would like to salute the following editors and bloggers, who not only make things happen for photographers, but support my work and Lenscratch by promoting what I am doing…and I am eternally grateful for the tweets, the shout outs, and the exhibition opportunities. Thank you all!

Paula is an incredible life force, providing exhibition opportunities to SO many photographers. She is active at a variety of portfolio reviews across the country and still finds time to, in Paula’s words:

Last year we mounted 53 exhibits although 10 of these exhibits were virtual, and 5 were temporary (meaning we put up for only a week or so and took down).

SOME PROJECTS I LOVE

BEST STORY ABOUT THE POWER OF PHOTOGRAPHY

One of my students and now a friend, Lydia Marcus, photographed a Gay Rights protest at the Morman Temple in Los Angeles concerning Proposition 8 and posted the image on Flickr. 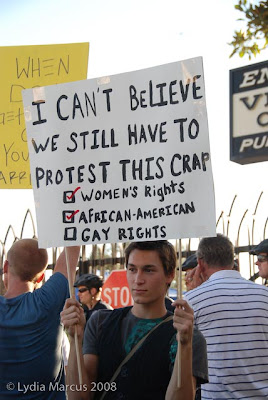 Two years later, Lydia received this letter:
Hello Lydia,
During the Proposition 8 furor in 2008 I ran across your photo of a man holding a sign that said “I can’t believe we still have to protest this crap,” and compared gay rights to women’s rights and equal right regardless of race. At the time I was an active member of the Mormon church and when I saw your photo I thought, “Silly gay man, it’s not the same at all!” But then my brain, subersive little blob of gray matter that it is, asked, “How is it not the same?” I couldn’t find a satisfactory answer.
I concluded that gay people deserve every right that I deserve and soon after I left my religion. I have since written a book explaining what I believe and why I made the choices I did. As the prospective audience would be very small, I plan to self-publish (although I will try to get a real publisher) and I was wondering if you might allow me to use the picture that changed my life.
Thank you for taking the time to consider it!
Michael-John

These were the goals I set last year for 2010:
spend more time in the darkroom…and fool around more
more landscape…
more humor…
more portraits..
more complexity in images…
create a Magcloud magazine…
work towards getting a book (books) published..
start that diet and exercise program (oh, wrong list)
And if anyone has a Mamiya 7 ii that they want to sell at a deeply discounted price….

Did I reach any of them? Well, I bought the Mamiya 7ii and I’m not totally on board with it yet…I need lots of “dating” time with a camera before I fall in love. Never got to that Magcloud magazine, though am trying to get a book pdf done. I have had so little time to shoot this year that it’s been frustrating.. been spending much more time writing, teaching, tutoring and much less time shooting, but after reviewing the work below, it seems I was able to produce something!

My biggest goal for 2011 is to get a book of The Lonesome Doll produced and published…here are some images I shot this summer: 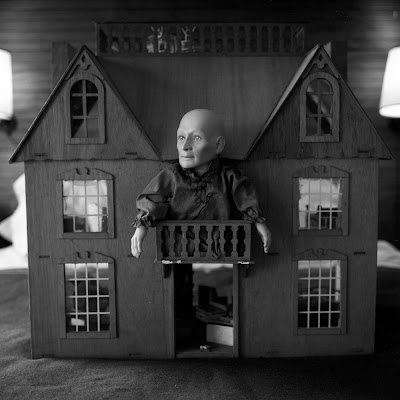 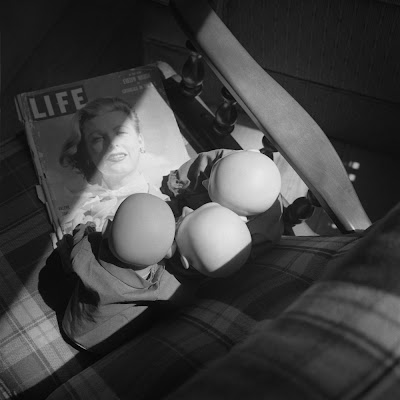 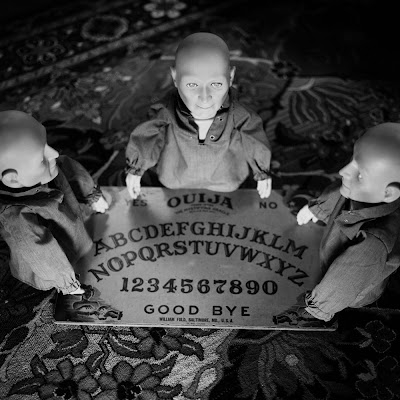 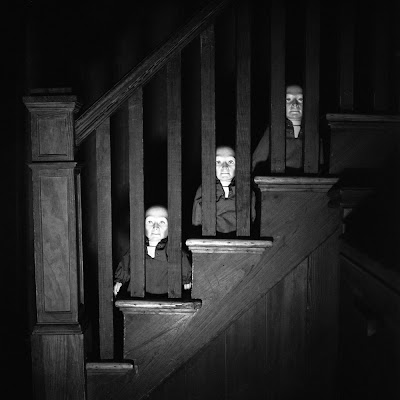 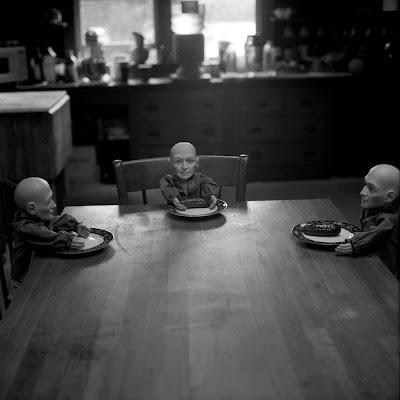 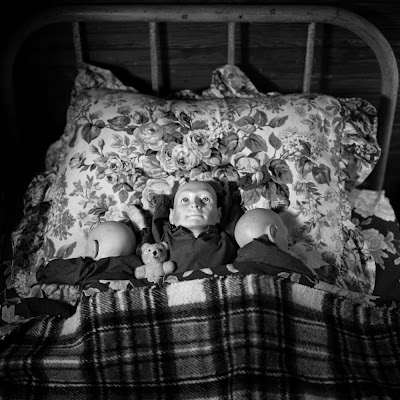 A new series that I am continuing to work on is Spring Fever, using 7 year old girls wearing 1950’s easter hats. The documentary director, Michael Apted, says that a child is fully formed by the age of 7 and this series explores that idea…I’ve shot about 25 girls, but don’t feel like I’m done yet. 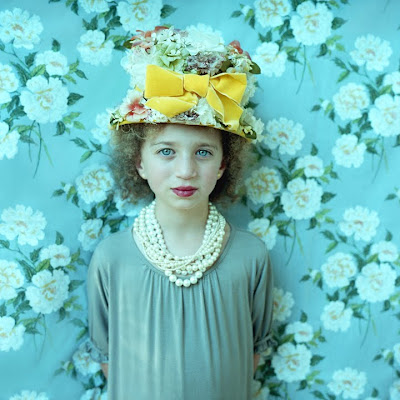 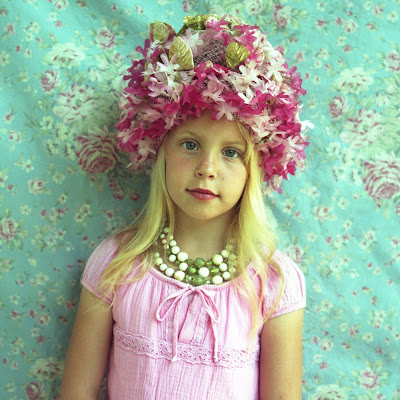 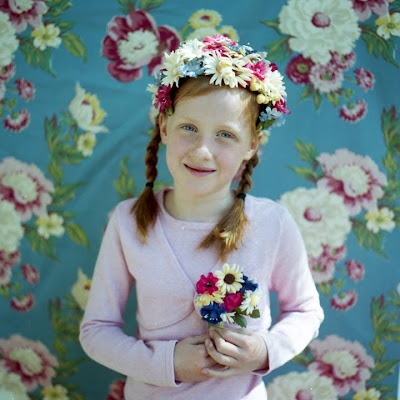 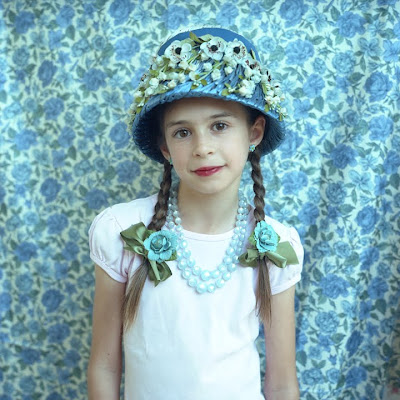 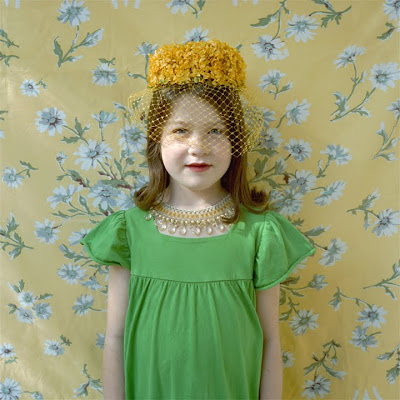 Another new series is Converging Conversations where I have combined two photographs to create a new dialogue. I love the idea of images creating a narrative and changing the original intent of the imagemaking. Here are some selections:

I wanted to create some classic and timeless portraits of my children and these were a few attempts: 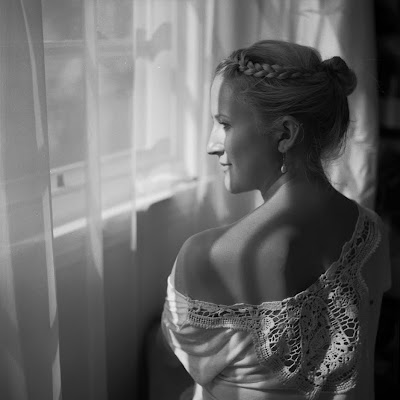 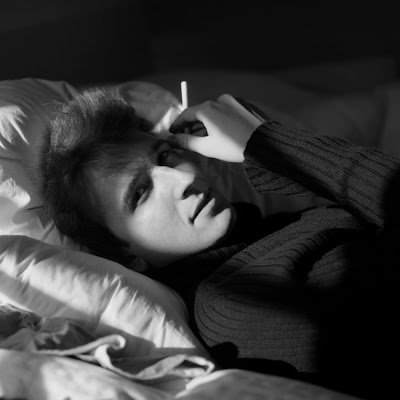 And lastly, these are a few favorites not part of a series…
Umbrellas 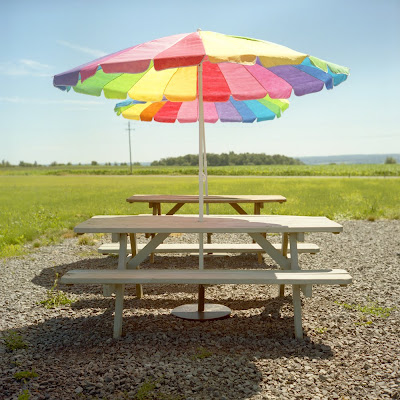 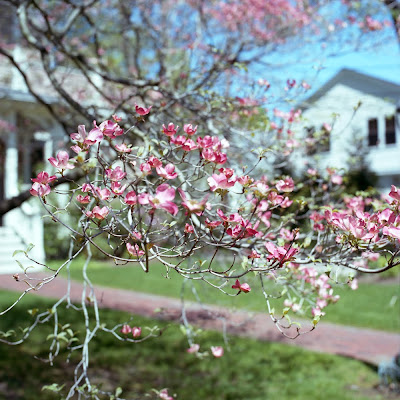 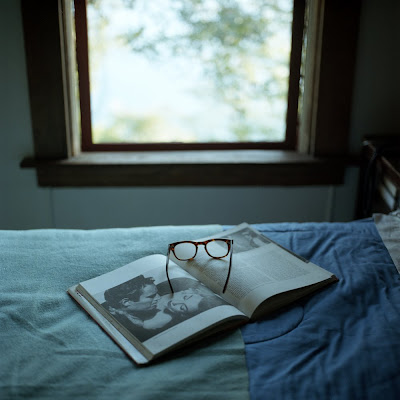 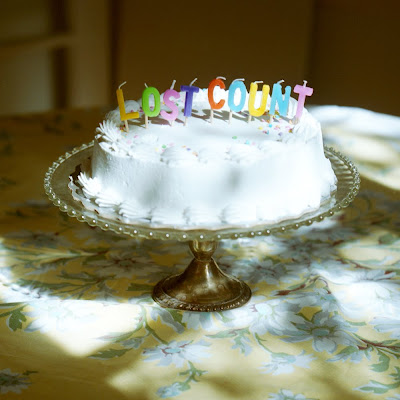 My goals for 2011?
BOOK or BOOKS
Magcloud?
Expanding Lenscratch to include one day of looking backwards and learning more about those who came before…
I have two new series that I want to shoot
Work on my technical skills, take a few workshops

So there you have it. Thank you for allowing me to share my year…My favorite photo of 2010? You’ll have to wait until tomorrow.

NEXT | LENSCRATCH Favorite Images of 2010 Exhibition >
< The G2 Gallery | PREV