Witness, a film on HBO tomorrow night by Aline SmithsonNovember 4, 2012

I happened to be in a hotel room in Colorado, watching The Bang Bang Club when I received an e-mail about a 4-part movie presented on HBO tomorrow night. 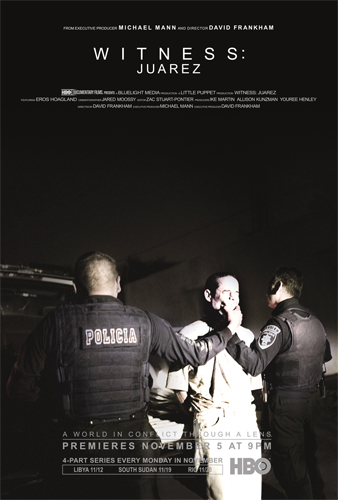 Witness: Juarez, a four-part documentary series from award-winning filmmaker Michael Mann debuts this Monday, November 5th at 9:00p.m.ET/PT. The film follows combat photographer Eros Hoagland as he explores Juarez, Mexico, the “murder capital of the world” where drug violence has left over 10,000 dead.

Presented in four parts – Juarez, Libya, South Sudan and Rio – Witness focuses on three determined photojournalists: Eros Hoagland, who explores the gang- and drug-related violence in both Juarez, Mexico and Rio de Janeiro, Brazil; Michael Christopher Brown, who chronicles escalating ethnic tensions in the wake of Muammar Gaddafi’s ouster last year in Libya; and Véronique de Viguerie, who follows the “Arrow Boys” and their struggle against General Kony in South Sudan. Between these three, their photos have appeared in Time, Newsweek, The New York Times, The Atlantic, Paris Match, The Guardian and many other publications.