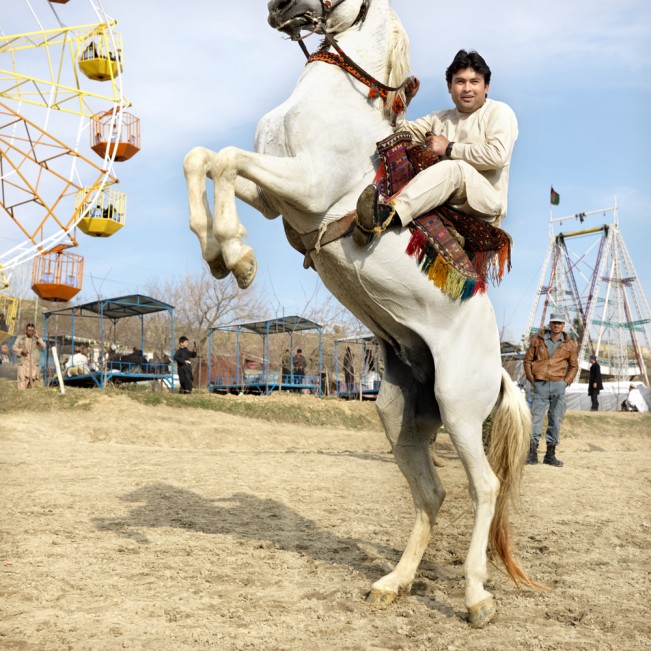 Afghan men are good horsemen. At Gharga Lake they can rent a horse. They gallop as fast as they can along the beach, trying to outdo each other when making their horses rear.
Favorite place of the city: Horse riding at Gharga Lake

One of the great pleasures of attending portfolio review events (this one was Lensculture/FotoFest Paris) is meeting other photographers, and in this case international photographers. Amsterdam photographer, Marieke van der Velden brought a wonderful body of work to the reviews about her experiences in Afghanistan that provides humanity and context for the people she encountered.  And it’s exciting to announce that as of today, this project won one of the Netherlands biggest prize in photography, in the abroad/series category. The project has three parts: a video, the photographs, and a blog that describes creating the work.

When I was 13 years old, I wrote my first ‘book’ about the World War II. Not the war but the influence of war on people has always intrigued me. At the age of twenty, I began my career as an on-the-run photojournalist for newspapers in the Netherlands. In 2007 I had the honour of becoming one of the 12 participants in World Press Photo’s Annual Joop Swart Masterclass. Organizations such as UNICEF and others have send me abroad some 35 times to photograph their projects and campaigns, mostly in Africa, South-America, Eastern Europe and Middle East. I made my first reportage in Kabul in 2005. The series ‘Baghdad Today’ ( 2011) and ‘A Monday in Kabul’ (2013) are my own initiative. Both are published world wide.

A quick search for ‘Afghanistan’ on Google images does not paint a pretty picture. War, soldiers, women in burkas and self-immolation: Is this truly the only faith of Afghanistan today? In March of 2013 I travelled to Kabul again, together with my partner Philip. To get a grasp of the society and it’s values, we decided to ask inhabitants one simple question: ‘what’s your favourite place in the city?’ This question led us on an exciting journey throughout the city. Together with translator Najibullah and driver Zarif we portrayed people at their personal favourite spot in town. We also gave our Dutch friends and family the opportunity to be part of our journey by posting questions for Afghans on our Facebook site. The answers to these questions can be found on the blog.With this series we hope to add an alternative view of Afghanistan. Not as a negotiation of the news, but rather as an addition. What does an ordinary Monday afternoon in Kabul look like? And what do we really know about each others lives?

MY PERSONAL MOTIVES FOR THIS SERIES:

Most people base their world views on what they read in the paper or see on television. In the case of cities like Kabul this means a continuous stream of extreme news facts with little room for day-to-day stories. Presumptions are based on what the media show us, but there is no personal contact between our personal lives. Not as an negotiation of the news but rather as an addition, some parts of the world also deserve an image with more nuance. Personally I think that when we get past the ‘us-them’ way of thinking and get our empathy and recognition back, the truth hits us harder than ever before: These are the people who have to live in a chaotic country who became a toy in the world politics of war and money. There is no choice for them, although the people in this series have just as little to do with politics as you and me. 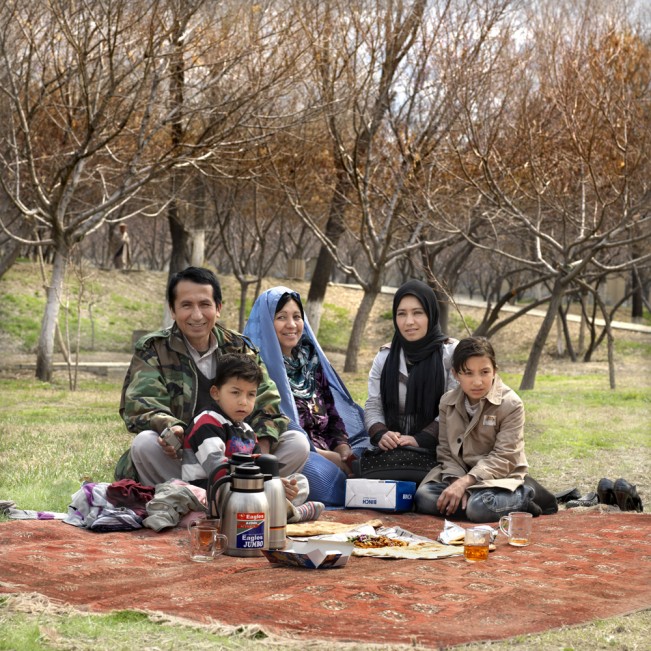 “My name is Maize, I live in a village between Herat and Mazar-e Sharif. Last week I made a 15-hour bus trip with my children to be with my husband Mohamadullah during the holidays. He is an officer in the Afghan army and is stationed in Kabul. After a long winter, this is the first day we can go to the park again. I actually wanted to go to the zoo but we will do this tomorrow instead.” (Maize is the woman who is wearing the blue burka)
Favorite place of the city: Picnic in Baghe Babur Park 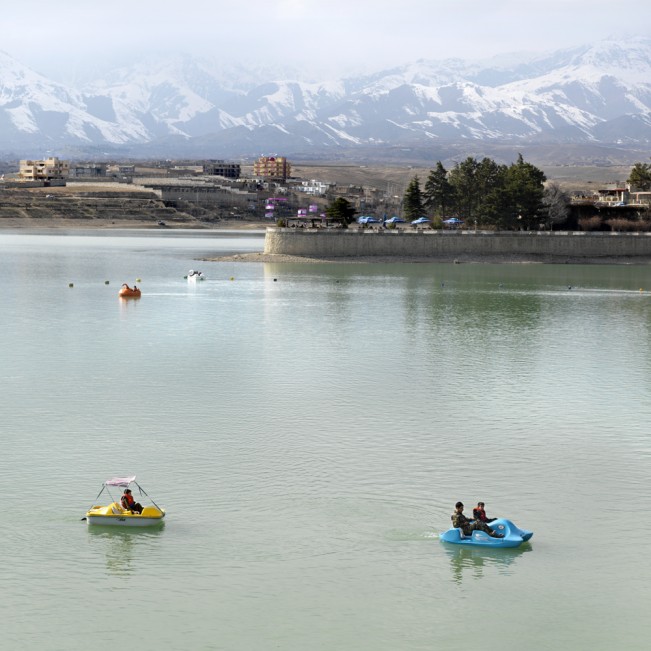 A few kilometres outside of Kabul is Ghargha Lake where families can make a little boat trip.
Favorite place of the city: Gharga Lake 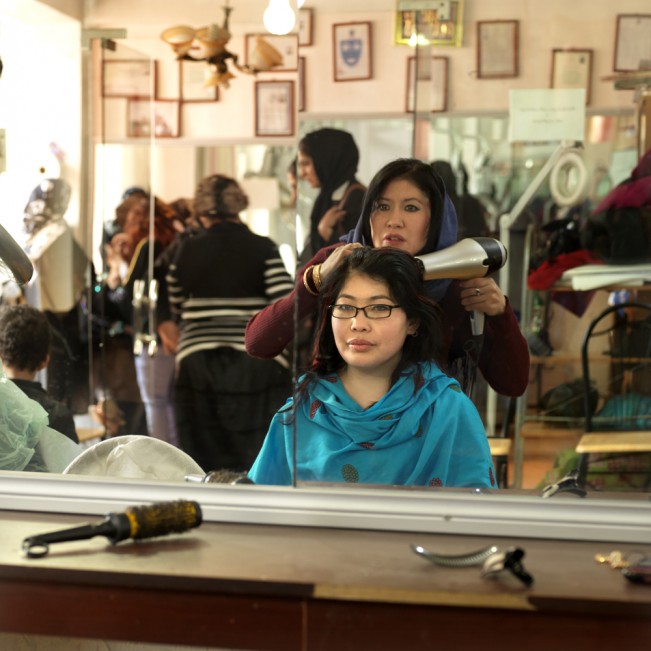 “My name is Khatera, I work in a beauty salon. There are more than a thousand salons in the city. For men, it is strictly forbidden to come here. The most important thing is the dyeing of the hair, as black as possible, but red highlights are also very trendy at the moment. If a bride comes in we make sure she looks fantastic; we give her a free facial massage. “As women of the city we have much more rights, in the countryside women still hardly ever make it out of their homes. I would never want to swap with them.”
Favorite place of the city: The beauty salon 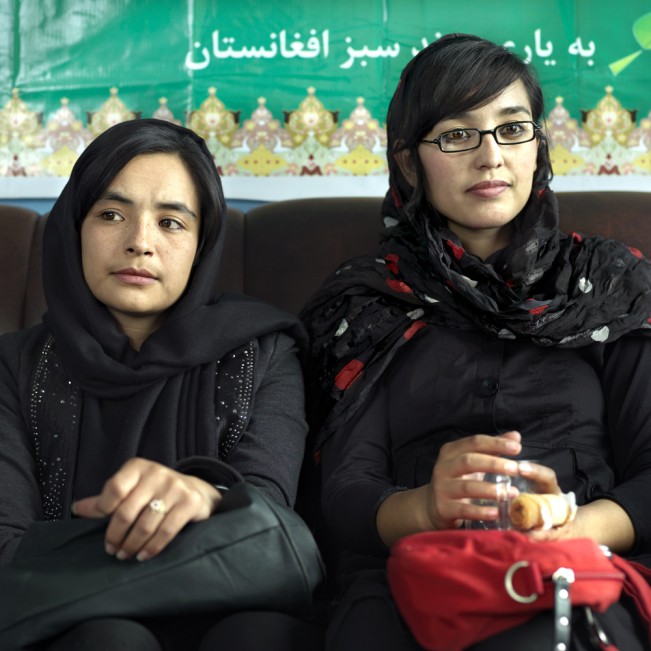 “My name is Fakhria, I have a degree in mechanical engineering and I now study law. But my real passion is to write poetry. As a protest I write about the injustice that’s being done to some women in our country. Recently, in the province acid was thrown over a woman as an honour crime, my friends and I were really sick about this and I expressed this in a poem. I would very much like to go to Dubai sometime, I’ve seen pictures where everyone looked happy. And I want to see the sea.” (Fakhria is on the left).
Favorite place of the city: The poetry group I go to once a week. We read out our new poems to each other. 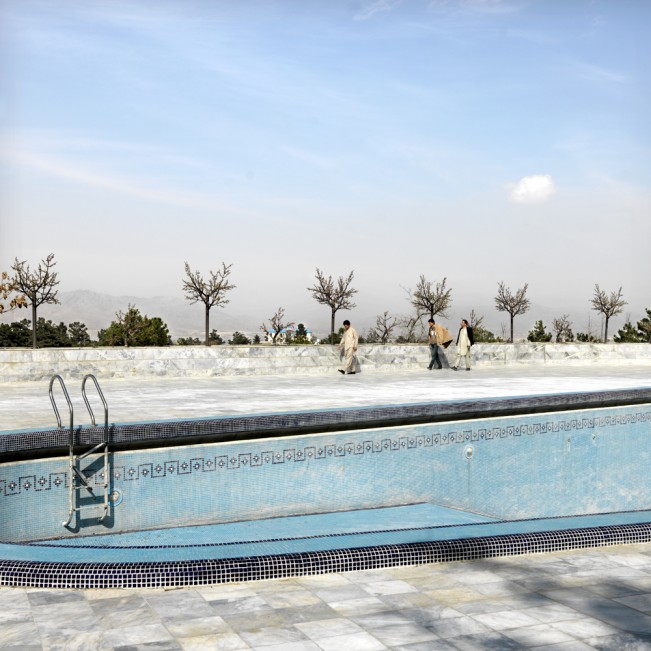 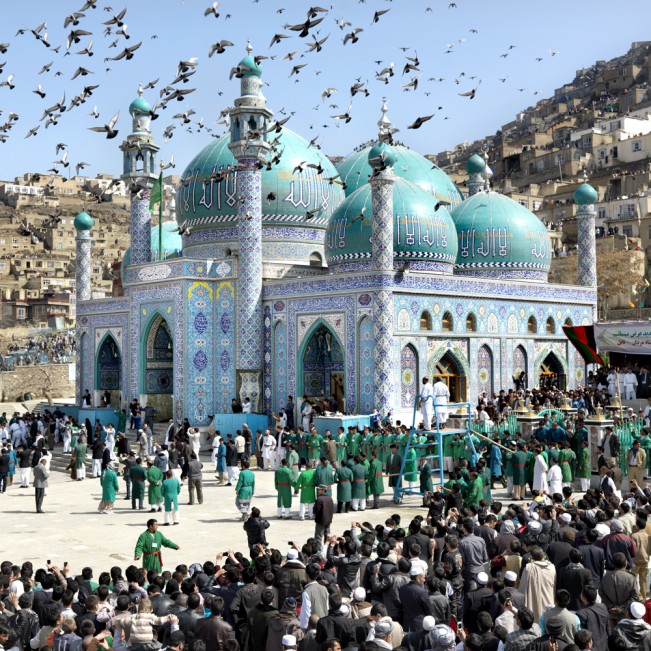 The squares and open areas of land around the Blue Mosque are filled with tens of thousands of people. Today are the New Year celebrations. The year 1392 started on 21 March 2013.
Favorite place of the city: Square around Blue Mosque during New Years Day. 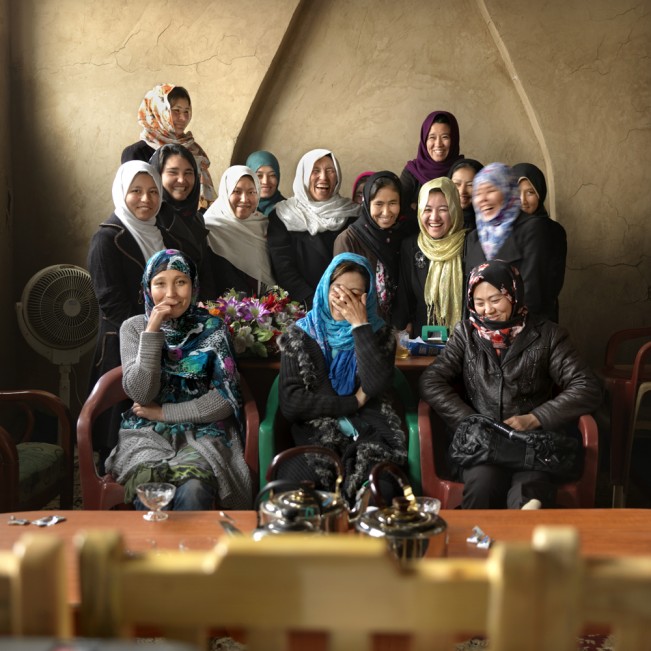 “My name is Zarifa, with this group of women we help other women who are in trouble. As residents of the same neighbourhood we visit their homes to talk and look for solutions. What makes me angry sometimes, is that the media show an unrealistic image of my country. Part of my family lives in Iran and they are always worried because of the dramatic news that they constantly hear.“I also follow a course at university. Sometimes I worry about the 2014 elections. The freedom I am currently enjoying could be over in a flash.” (Zarifa is the girl with the black headscarf, furthest left)
Favorite place of the city: Meetings with the women groups. 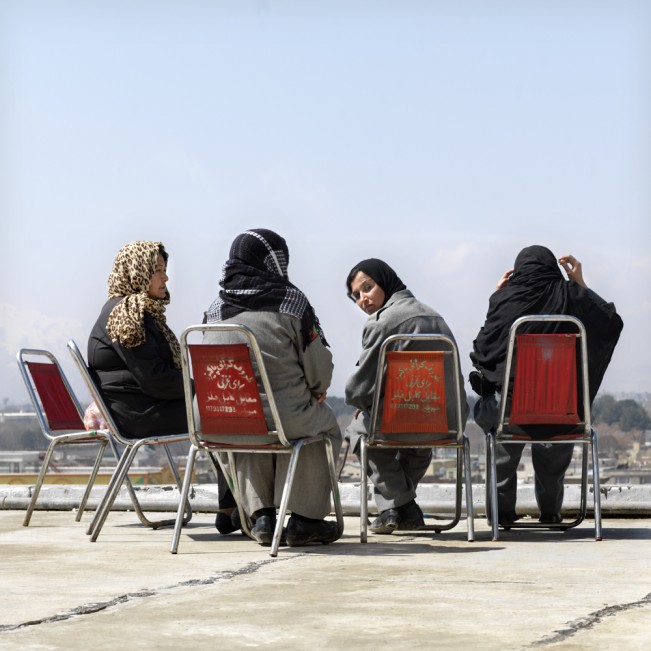 “My name is Shamila, I’m training to become a police woman, like my other two sisters. The city of Kabul currently employs 400 police women who are mainly deployed when searching women at the entrance of ministries, airports, hospitals and women’s prisons. Currently, working on the streets is too dangerous for us.”
Favorite place of the city: Police trainings centre 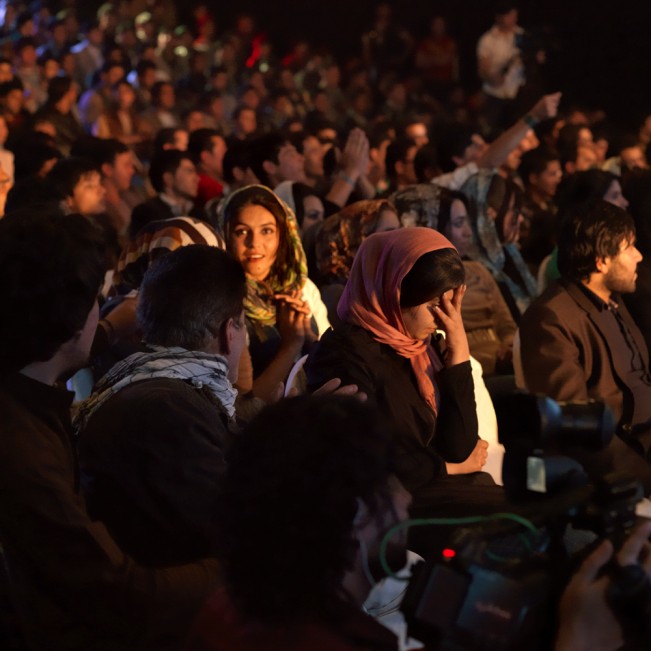 “My name is Mazhda. For privacy reasons I want to leave Afghanistan, even though I’ve never been to another country. It has to do with love. I tried to get a visa for Europe, it does not matter what country. But nobody gives me a visa so I can’t go anywhere. It is very difficult for me to keep my hopes up because I know that I cannot be myself here.” (The girl of this story was in this TV-studio but is not on the photo)
Favorite place of the city: None 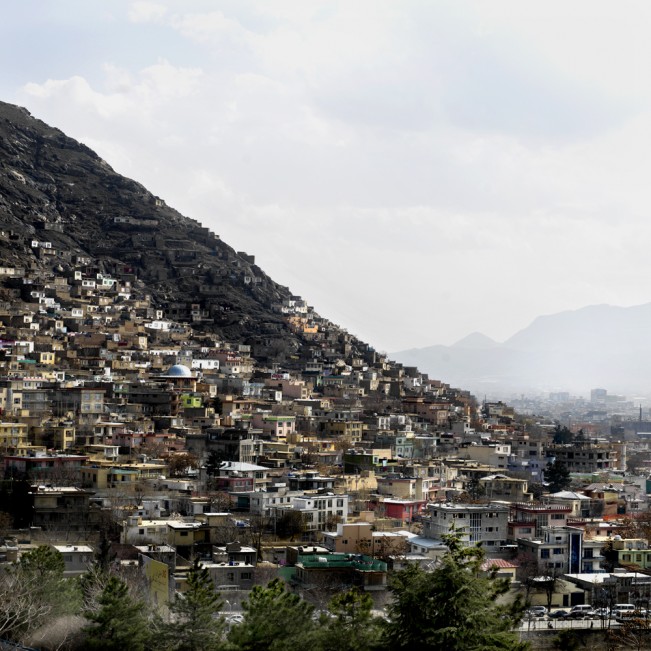 Kabul is located in a valley where the houses are built against the mountains. The city has a population of between three and four million people.
Favorite place of the city: Best view from one of the mountains in the city. 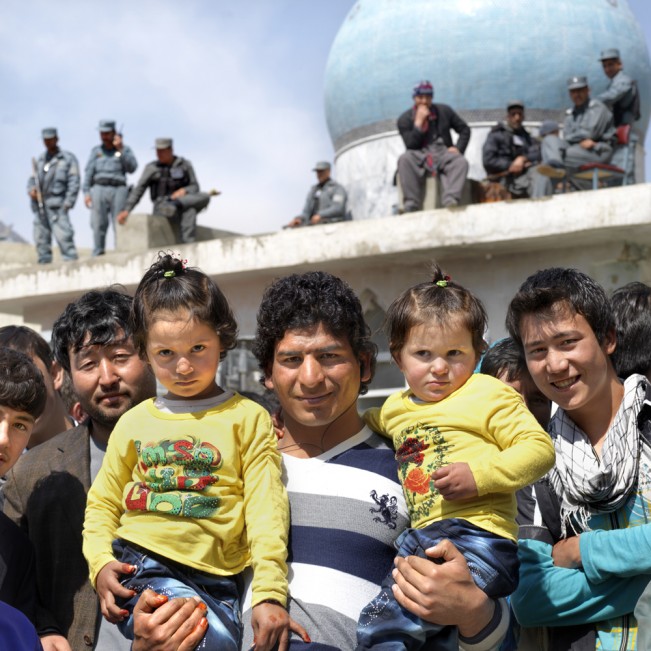 A father with his two daughters during the New Year’s party at the Blue Mosque. He wishes everyone in the Netherlands ‘Nowruz Mubarak’ (happy New Year).
Favorite place of the city: Area around Blue Mosque during New Years Day 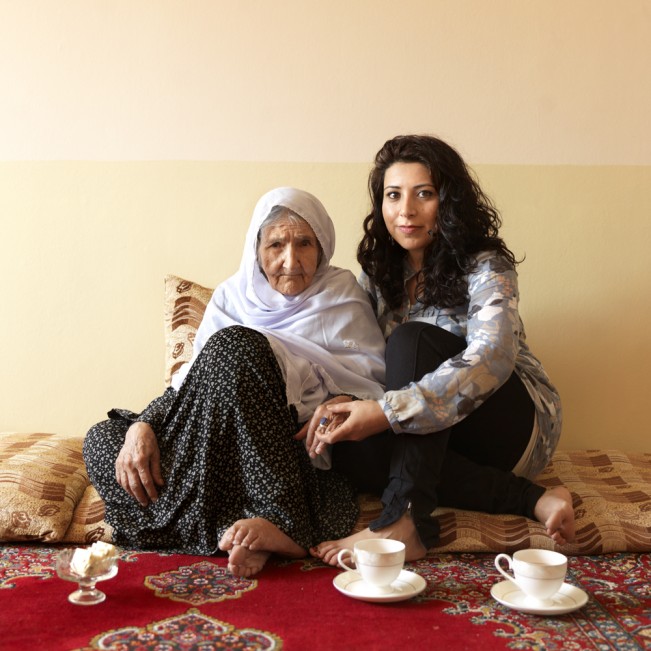 “My name is Fatma, when I was eight years old we fled to the Netherlands. My family still lives in Abcoude, but I moved back to Kabul permanently a year ago. Here I live with my grandmother and my niece in the flat of my family. During the week I have a busy job checking projects in the provinces. I see big differences with Kabul.“My family would like me to come back to the Netherlands, but here I feel like I can really contribute to my home country.”
Favorite place of the city: The house where I live with my grandmother 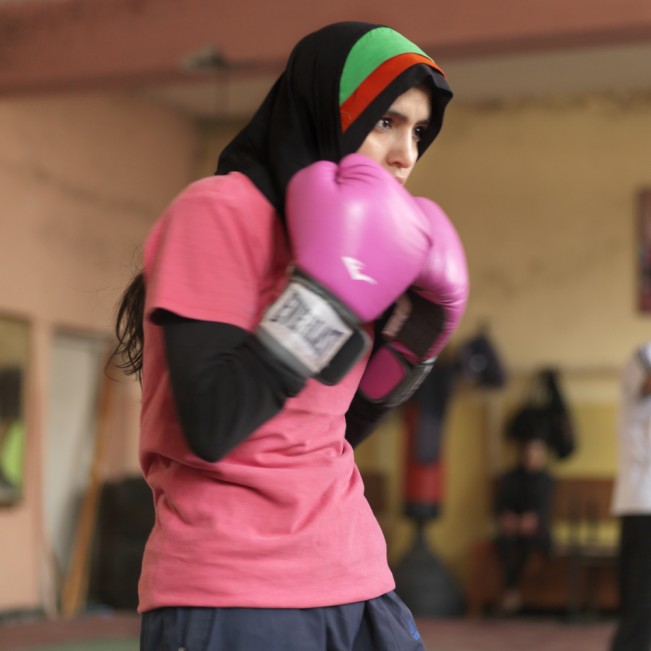 “My name is Shamella and my biggest passion is my sport: boxing. I’ve even been to Kazakhstan for competitions. A few years ago a teacher at my school encouraged us to practice sports. She said many girls were afraid of boxing. I thought ‘oh really?!’. Then I decided that I wanted to give it a try. In Kabul there are more than 50 boxing gyms for men, and the Afghan TV shows many programs about sports, usually involving men. For women, this boxing gym is the only place to train.”
Favorite place of the city: Boxing school at Ghazi stadion. 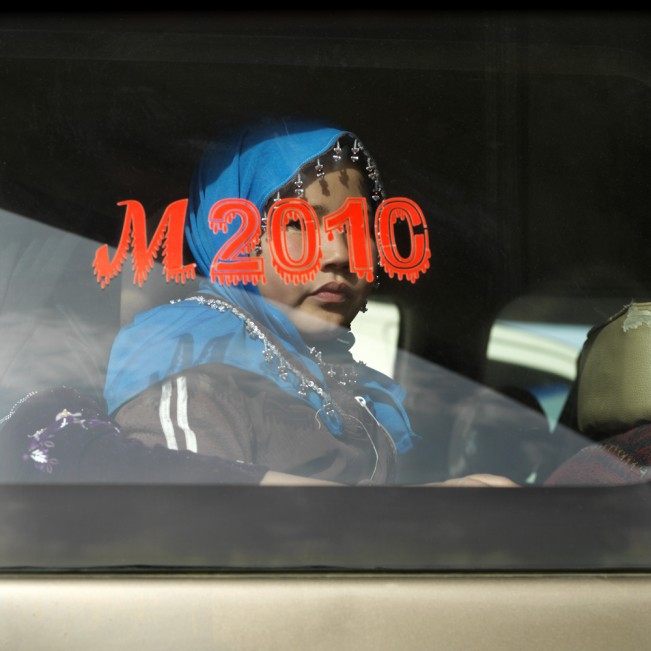 A young girl with her mother in a city bus in downtown Kabul. Unfortunately I couldn’t speak to her because we only met in a split second by our eyes. She laughed at me.
Favorite place of the city: should it be public transport? 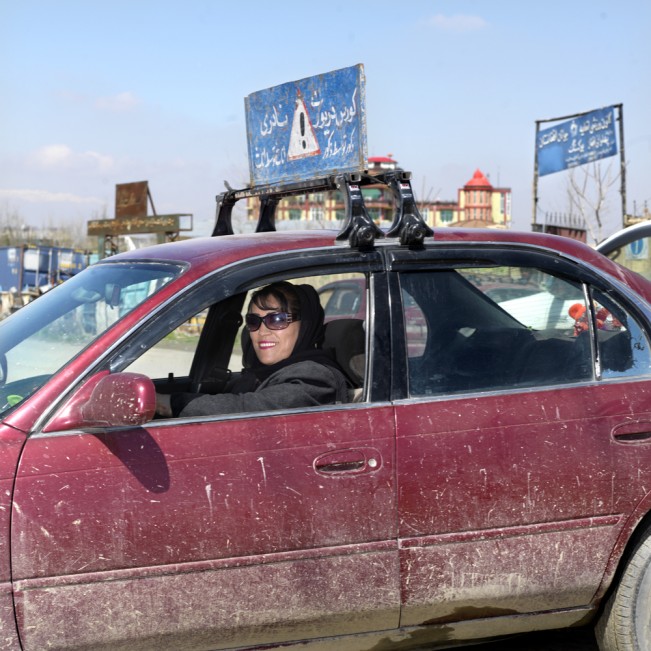 “My name is Shakila, I am a mother of 10 children aged from 7 to 25 years old. Together with my husband I’ve had a driving school since 2006. I give driving lessons to women and also teach them all about mechanics. If their car breaks down by the side of the road they need to be self reliant. Sometimes men find it difficult to accept that their wives are behind the wheel. But when they see the benefits – not having to always drive around their wives – the problem becomes a lot less prominent.”
Favorite place of the city: Behind the steer wheel of my car. 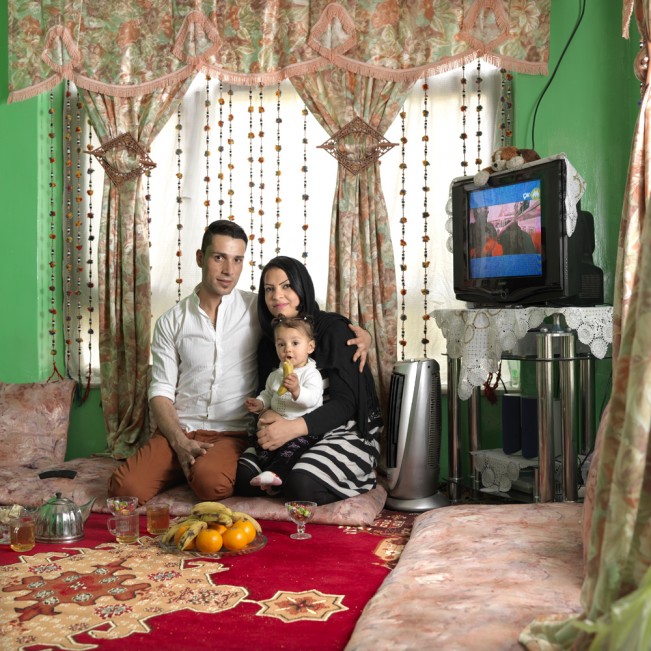 “My name is Leda, I’m married to Reza. He was hooked the moment I walked into his store to buy clothes. He asked my parents if he could marry me. Young couples usually live with the family of the groom, but because Reza’s parents have both passed away we live without family in a private house we are renting. Despite what we have experienced, we are very happy. Our daughter Reza dances every day to the sound of the imam when he sings through the speakers. She knows the words ‘mommy’, daddy’ and ‘hello’.”
Favorite place of the city: Our living room 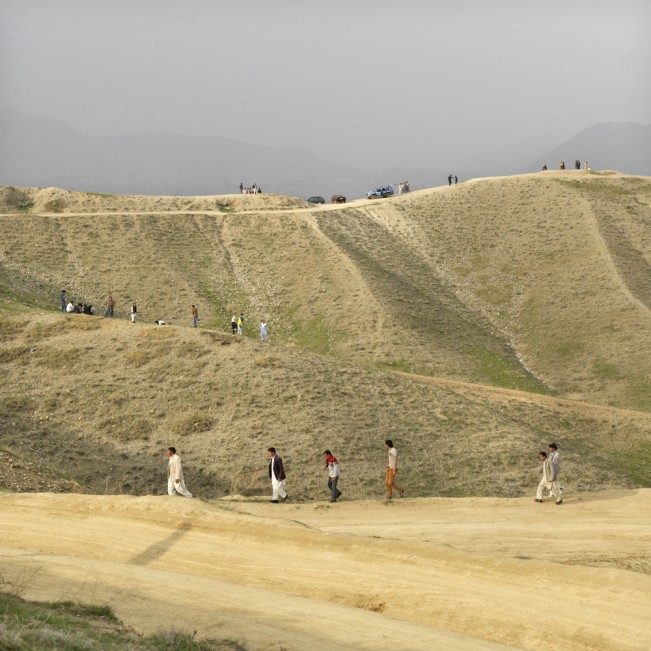 Boys are testing their cars and mopeds in these mountains close to Kabul. Drifting and at high speed they go up the mountain.
Favorite place of the city: Steep roads in the mountains just outside Kabul