Colleen Plumb: Towards the Sky Again by Aline SmithsonApril 3, 2014

Colleen Plumb is about to open an exhibition at the Dina Mitrani Gallery in Miami. Towards the Sky Again will run from April 10th  through May 31st, 2014.  But this isn’t the typical gallery exhibition, she will be showing in two spaces, one being the Dina Mitrani Gallery and next door at the she will be showing a selection of videos at The Screening Room, the only space in miami dedicated to showing video and film. Towards the Sky Again examines our desire to surround ourselves with nature, whether real or man made and how we exist in and draw sustenance from different environments.  Her series, The Animals are Outside Today, was received with great critical acclaim, and it too shows her sensitivity towards the natural world.
Colleen Plumb earned her MFA in Photography from Columbia College Chicago (1999), where she is currently an adjunct faculty member. Her work is held in several permanent collections, and her photographs are part of the Midwest Photographers Project at the Museum of Contemporary Photography, and the Chicago Project at Catherine Edelman Gallery. Recent solo exhibitions have been at Jen Bekman Gallery in NY, van Straaten Gallery in Denver, Union League Club of Chicago, and Chicago’s Historic Water Tower. Group shows have been at PCNW in Seattle, Gallery 339 in Philadelphia, Griffin Museum in Massachusetts, the U.S. Botanic Garden in Washington D.C., and a video installation at EXPO Chicago, with Dilettante Studio. Plumb’s work has been featured in PDN, Ireland’s Blow Photo Magazine, Time’s LightBox, the BBC in Brazil, Women in Photography NY, and The New York Times’ LENS Blog. Her book, Animals Are Outside Today was published by Radius Books in 2011, with an essay by Lisa Hostetler, Curator-in-Charge, George Eastman House in Rochester, NY.

Towards The Sky Again

From what (or where) do we draw strength and sustenance? Do artificial/mediated forms of nature offer a satisfying substitute for the actual? Where does wilderness begin and end? Towards The Sky Again looks at the ways humans engage with and make connections to the natural world. The images, made over a fourteen-year period (1997-2011), show oddities, interventions in the landscape, and fabricated realities. The photographs are in diptychs, offering multi-layered visual and contextual readings.The built environment is full of cultivated natural forms, and the landscape around us has layer upon countless layer of human intervention. I am interested in these contradictions—the push-and-pull between interior and exterior worlds. The series looks to the elemental—terra (earth), aqua (water), aer (air), ignis (fire)—as reference, as a lead to something beyond the material, beyond human power. 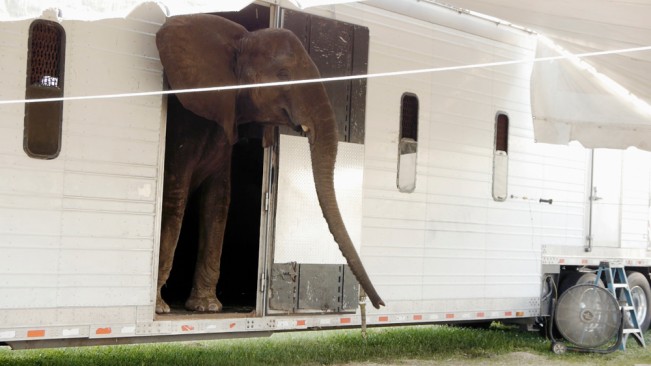 I wonder if the act of looking at animals is part of a larger search for connection with something beyond ourselves, beyond our humanness—an attempt to connect with the mystery that nature inspires, even if this experience must be heavily mediated. Why do so many people want to look at animals? Why do we defend or implicitly support the practice of looking? What does it mean to participate as a spectator of animals?

Thirty Times A Minute explores elephants in captivity. I have traveled to more than half of the seventy-five zoos in the US that keep elephants, making video of elephants exhibiting what biologists refer to as “stereotypic” behavior, (also called “weaving”). Only captive elephants exhibit weaving, which includes rhythmic rocking, swaying, swinging the trunk, head bobbing, stepping back and forth, or pacing. These compulsive, repetitive movements cause debilitating, life-threatening damage to the animals’ feet and joints. I have also begun to document circuses and fairs where elephants perform. The title references the heart rate of an elephant: circus owners have been known to tell visitors that elephants must sway as they doze while standing, keeping with their heartbeat.

The durational video of these repetitive movements within environments that nearly replicate one another, are made from stationary viewpoints, and when viewed en masse, become a larger study into unified, rhythmic movement. I am interested in the notion of collection as obsession, and ways that the project’s multiplicity, in form and content can mirror the endless and obsessive state of the animals’ behavior. Elephants communicate through infrasonic sound (sounds too low for humans to hear). The audio references these hidden vocalizations.
Through the observation of stereotypic behaviors in elephants, I am impelled to ask: in what ways do humans, along with all living beings, seek soothing and connectivity? Can ritualistic behaviors be viewed as a means of escape from present reality, and do forms of escape potentially—or inevitably—become debilitating distortions?

All Movement is Bound to be Towards a Perfect State, 2014
single-channel color video, sound; 7:30 min. 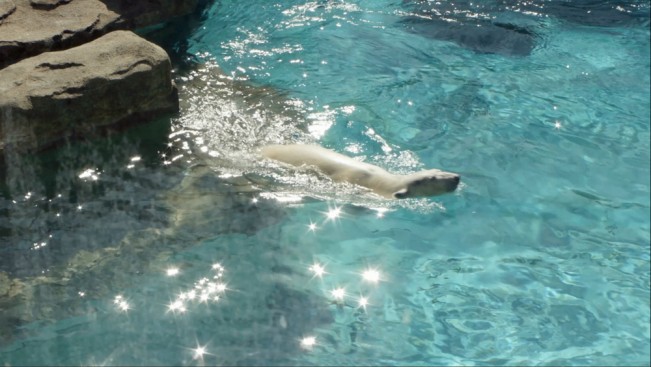 still: All Movement is Bound to be Towards a Perfect State, 2014
single-channel color video, sound; 7:30 min.

We observe, possess, consume and strive to connect with nature in so many ways, sometimes in absurd or brutal ways. In the largest sense, striving for some sort of connection, in spite of the often bumbled methods, still propels us in a forward motion. Movement forward—the simple act of seeking—has significance. Circles, a spiritual symbol of perfection, are used throughout the video to reference the message in the above quote.

These sequences of moving images—evidence of our consumption of nature—when added up together ask:

What are our pastimes? How do we enrich our lives? Where do we spend our money? And especially: What do we do to not feel alone?

NEXT | Nermine Hammam: WÉTIKO: Cowboys and Indigenes >
< Kevin Kline and Bruce Schultz: A Stranger to Me | PREV