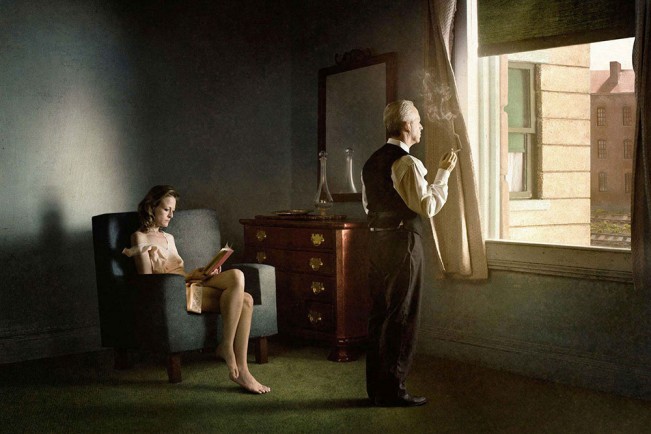 The Project Launch submissions were of a broader and higher quality spectrum than I have come to expect from open grants and awards. All deserved some consideration and many required repeated visits to explore the subtlety, story line and beauty of the work. Some told stories that were intriguing and occasionally eye opening. Others were explorations of the ageless examination of light, colour, texture and beauty. Some were extremely personal while others had the subjective eye of the photojournalist. The breadth of style, structure and composition of the images made judging the works a joy.

The request for 15-20 images caused some participants to fall short with some offering too few images to make a judgment while others diluted a short series by padding it out with extraneous images. Some stories are short and to the point and have a serious value in this field, but this is not the grant for those stories.

I took my first impression seriously but continued to look at the quality and consistency of the subject matter. I tried to determine the story line before reading the artist’s statement and then judged the work against the intent. I was drawn to the ones that seemed to exhibit technical expertise while at the same time bending that skill to the benefit of their story. The ability to work across a number of images while maintaining a central story or theme is not always easy. Judging works by artists unknown to us is a highly subjective exercise and the failure to succeed in this competitive grant isn’t an automatic rejection of the work. There were a great many portfolios that fell at the last hurdle when a judgment had to be made to winnow the masses down to the few.

My juror’s choice was Richard Tuschman’s Hopper Meditations. Here in the UK there are several artists who have chosen to reassemble and replicate the works of classic painters and their mythical themes, but Richard has chosen, to my mind, the one painter who worked in the manner of a number of current photographers. He captured the mundane, daily lives of people while exploring the effects of light and shade on them and their environment. The images reminded me of Gregory Crewdson’s constructed images, but with a simpler cast and palette. They don’t tell a completely contemporary story of the world as it is lived today, as many of the documentary photographers did with great effect in this competition. Instead they are, like Hopper’s paintings, a quiet meditation on the timeless psychological weight of lives lived. 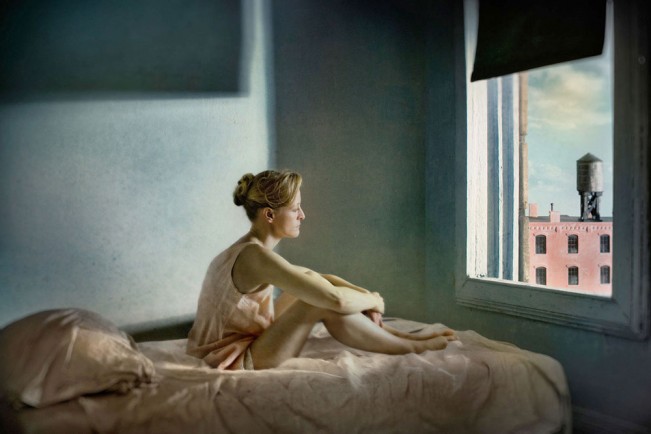 Hopper Meditations is a personal photographic response to the work of the American painter, Edward Hopper.

My images are created by digitally marrying dollhouse-size dioramas with live models. The sets I built, painted and photographed in my studio. A lot of the furniture is standard dollhouse furniture, but some I made myself. I then photographed the models against a plain backdrop, and lastly, made the digital composites in Photoshop.

When I began the series, my plan was to base each work on a specific Hopper painting, and this is the case in the earlier works in the series. As the series progressed, though, I felt more freedom to create my own compositions that were inspired by Hopper’s style and vision, but not based on specific paintings. 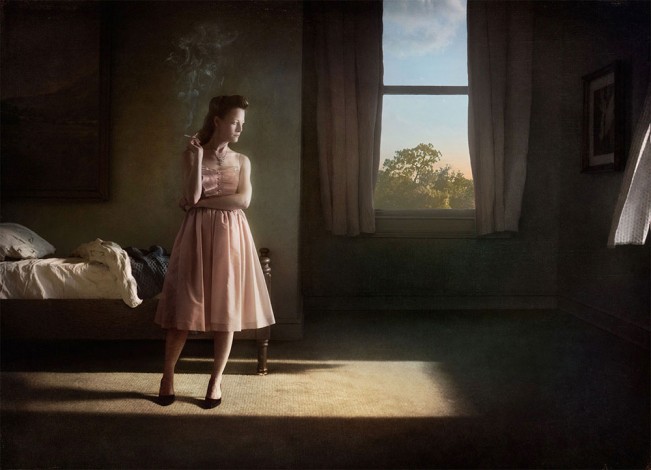 I have always loved the way Hopper’s paintings, with an economy of means, are able to address the mysteries and complexities of the human condition. Placing one or two figures in humble, intimate settings, he created quiet scenes that are psychologically compelling with open-ended narratives. The characters’ emotional states can seem to waver paradoxically between reverie and alienation, or perhaps between longing and resignation. Dramatic lighting heightens the emotional overtones, but any final interpretation is left to the viewer. These are all qualities I hope to imbue in my images as well.

In other ways, my pictures diverge from Hopper’s paintings. The general mood in my work is more somber, and the lighting is less harsh, than in Hopper’s. I am trying to achieve an effect perhaps closer to the chiaroscuro lighting of Rembrandt, another painter I greatly admire. I would like the lighting to act as almost another character, not only illuminating the form of the figures, but also echoing and evoking the their inner lives. I suppose I would like to marry the theatricality of Rembrandt with the humility of Hopper. In this way, I like to think of my images as dramas for a small stage, with the figures as actors in a one or two character play. The characters, by appearance, are rooted specifically in the past, somewhere in Hopper’s mid-twentieth century. For me, this augments the dreamlike, staged effect of the scenes. The themes they evoke, though—solitude, alienation, longing—are timeless and universal. 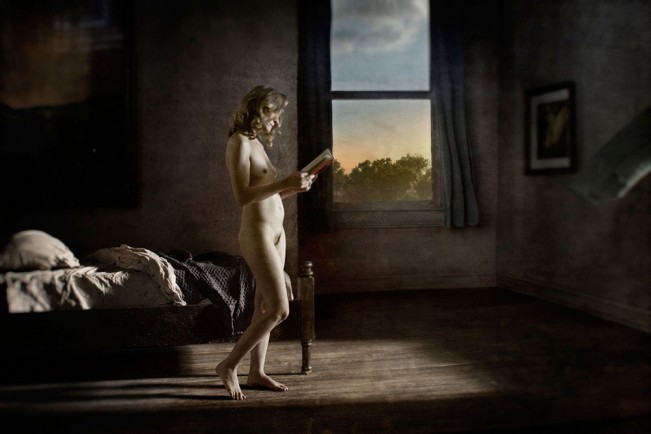 Richard Tuschman began experimenting with digital imaging in the early 1990’s, developing a style that synthesized his interests in graphic design, photography, painting and assemblage. His work has since been exhibited internationally and recognized by, among others, Photo District News, American Photography, Prix de la Photographie, Paris, LensCulture Exposure Awards, and the International Photography Awards. Commercially, his work has been featured in publications and advertisements for clients such as Adobe Systems, The New York Times, Penguin, Sony Music, Newsweek and Random House, among others. He has lectured widely on his artistic technique and creative process, and has taught at the University of Akron Myers School of Art (Akron, OH), Ringling College of Art + Design (Sarasota, Fl) and Cuyahoga Community College (Cleveland, OH). He currently lives and works in New York City. 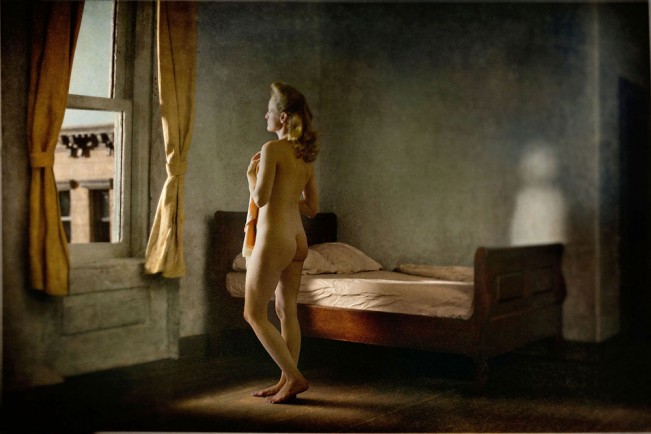 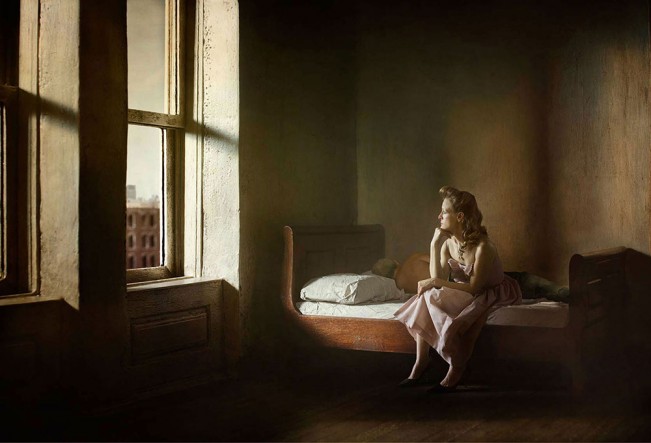 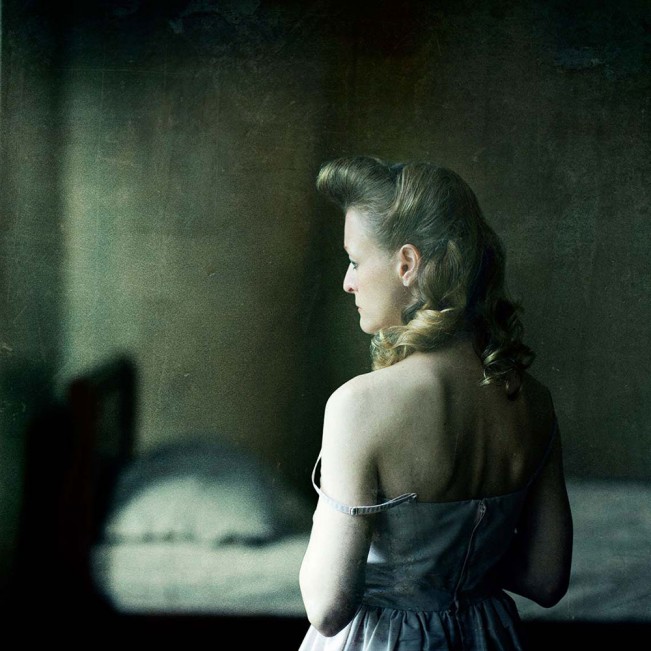 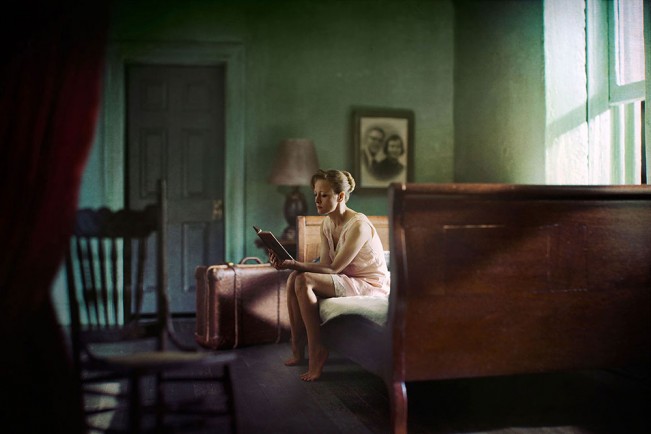 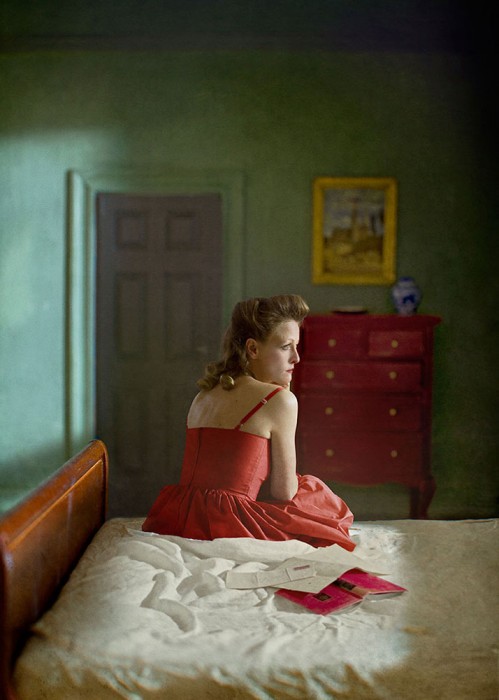 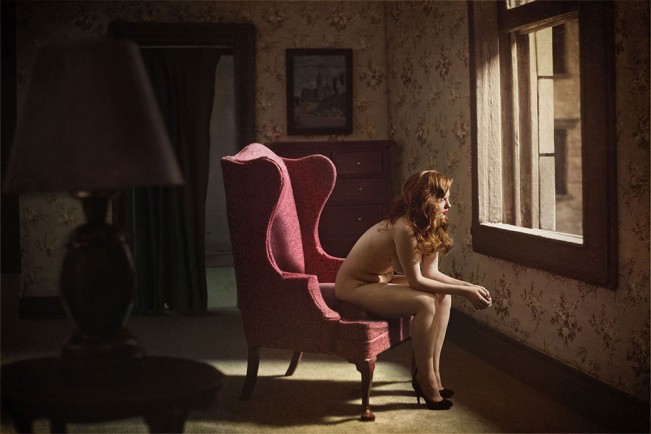 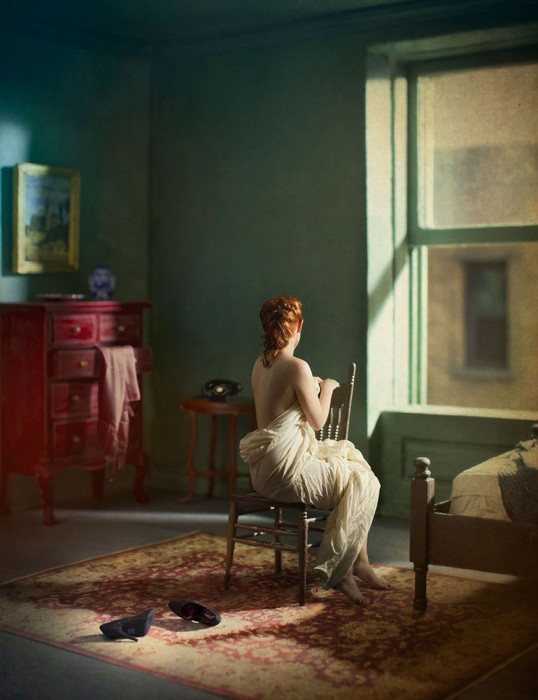 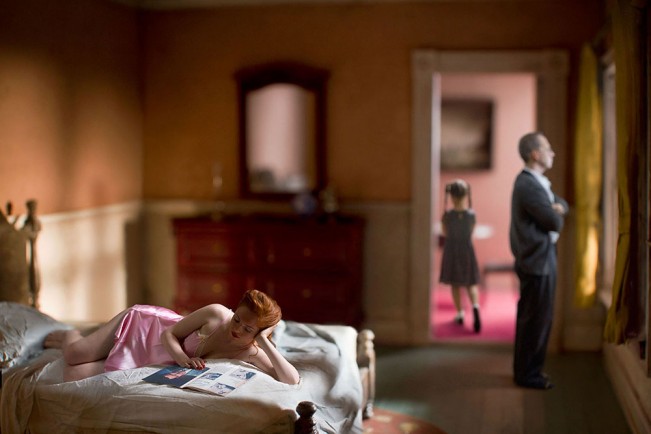 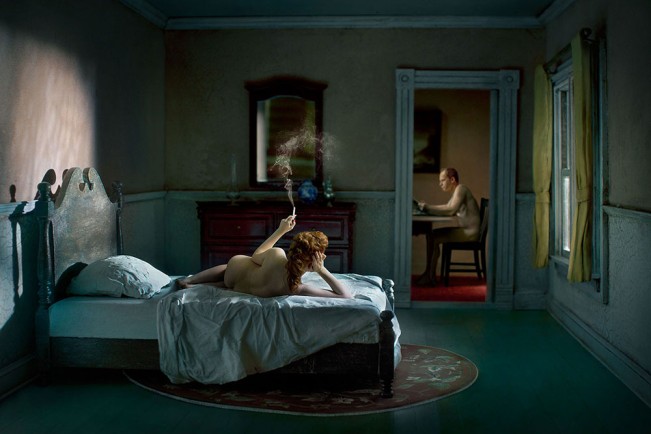 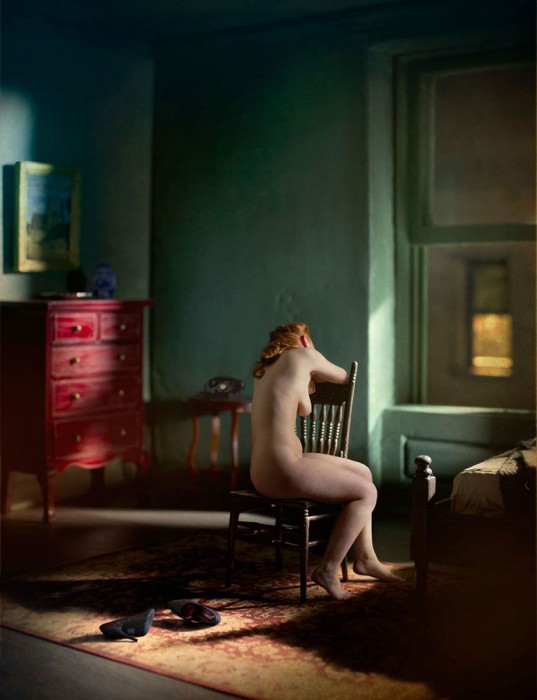 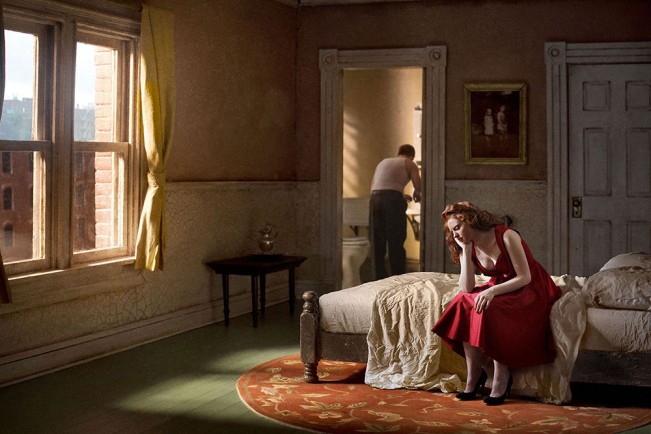 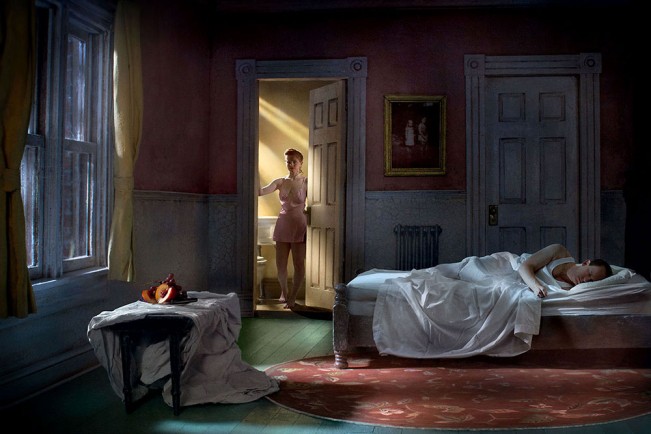 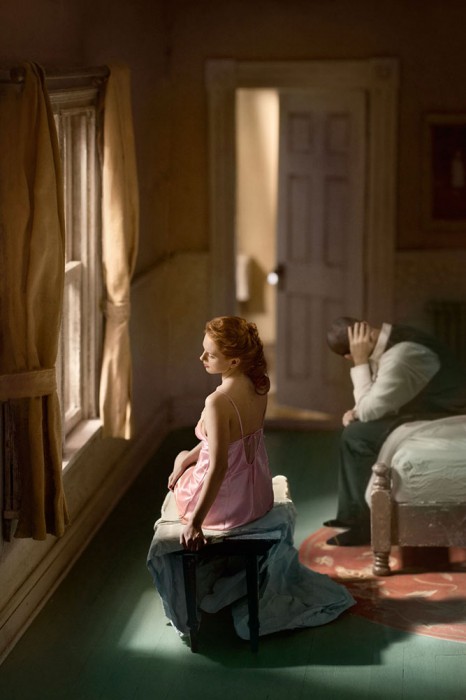 Tags: Based on Paintings, Richard Tuschman