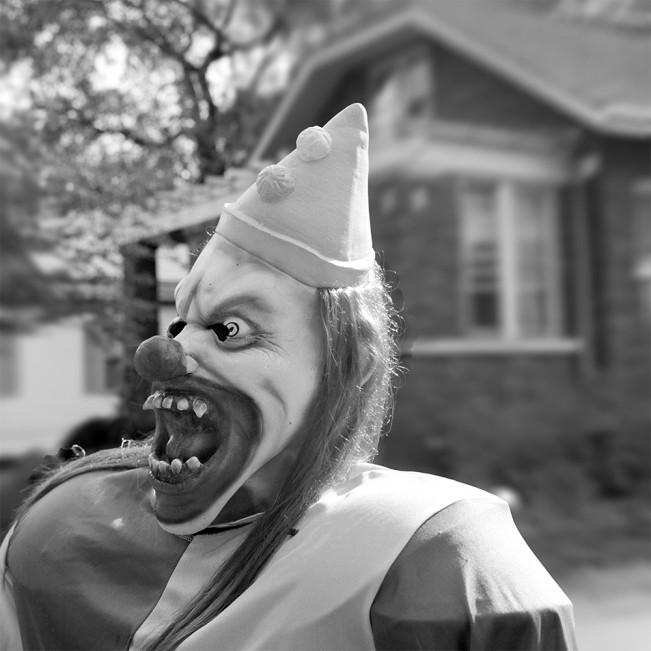 Liese Ricketts is not afraid of the dark, especially on Halloween. What she is more fearful of is what fear does to our sense of freedom. Her work speaks to our culture of uncertainty, where childhoods are now restricted, and things that go BOO in the night are not apparations from the grave but are very much within our world.

Liese received her MFA from the School of the Art Institute of Chicago and has taught photography full time for over 25 years at the University of Chicago Laboratory Schools. Now retired, Liese devotes her energy to her personal work. She exhibits nationally and internationally, and from September – December 2016 she will have a major solo retrospective of her work at the Palace of Torre Tagle in Lima, Perú. She is a member of Perspective Fine Art Gallery in Evanston, IL. 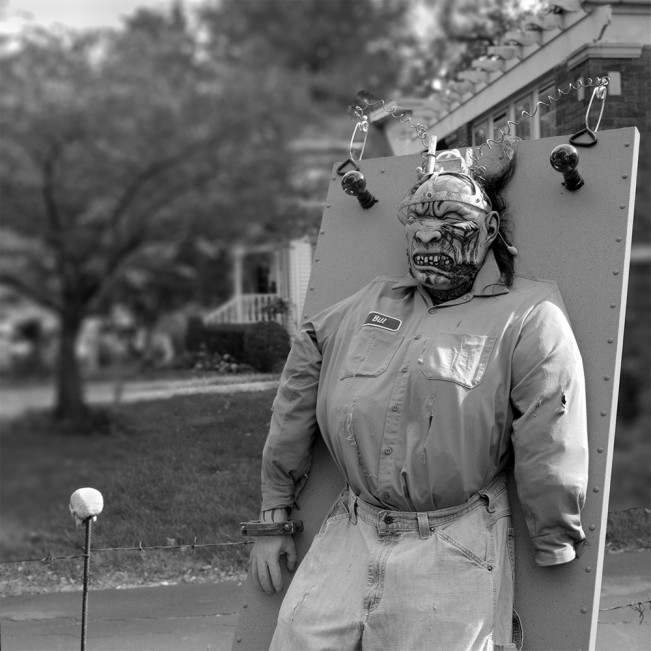 When I was a little girl, a very long time ago, life in my small suburb was simple, certain, and safe. I could walk the neighborhood at night, stand under street lamps and get hit by June bugs, climb trees with the boys, and eat crab apples ’til I got diarrhea. We never locked our house or the car doors. When we went on short vacations, we would crank the kitchen window open for the cat to come in and out. The Lambrecht Dairy deliveryman would come into the house, open the refrigerator, put in the milk, cream, butter, and cottage cheese we needed and leave the bill to pay later.

My brother and I walked along a path by wild red sumac bushes to the grocery store a mile away to buy penny candy and look for tadpoles in the muddy puddles. At night in winter I walked to a nearby school playground lit by a floodlight to figure skate on the ice, if the boys hadn’t wrecked its smooth surface by playing hockey. We could stay out way past dark. At Halloween, we dressed up in homemade outfits and walked around the neighborhood collecting candy and pennies in old brown paper bags. We just didn’t talk to strangers. 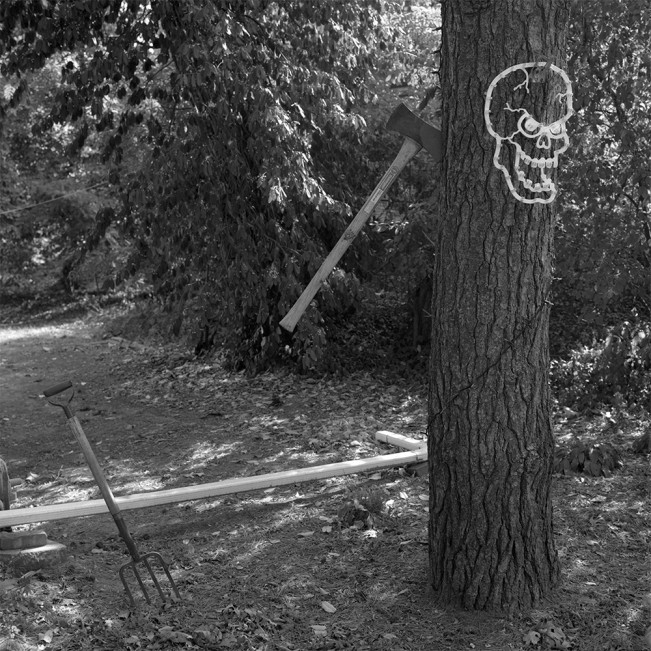 Life is different now, although the houses still look the same. I dare not leave my house, windows, or car unlocked, even if parked in my driveway. Children don’t walk anywhere alone, except home from the school bus in groups. Grownups have hijacked Halloween, decorating their modest homes with the stuff of nightmares. For about a week before the holiday, I walk around and find, not the innocuous black cat or smiley witch of old, but tended lawns transformed into scenes of vicious savagery, toxic violence, and wanton gore. Police patrol the streets and set the curfew for 7 pm.
I ask my husband why he thinks this so. He says, ” Same reason dogs bark. Fear.” 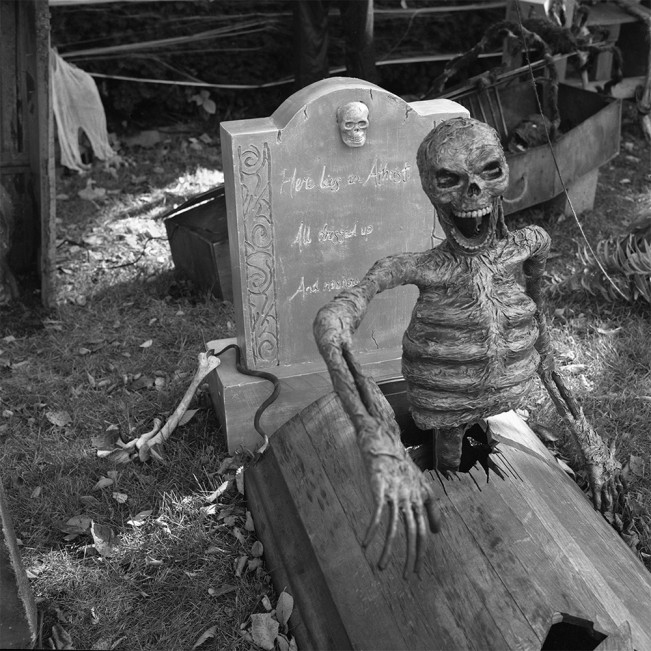 Yes. I have become fearful, too. Of thugs and muggers. Of crazy people with weapons. Of men in masks. Of Tylenol killers and mothers who murder their children. Of carjackers. Of burglars and rapists. Of bombers on planes. Of radical insurgents. Of identity thieves. Of bottles on the supermarket shelf that are unsealed. Of the seemingly unstoppable, irreversible escalation of Menace.

My neighbors in Prozac Nation ward off evil once a year with baleful icons, our private terrors made public. My pictures tell this story. 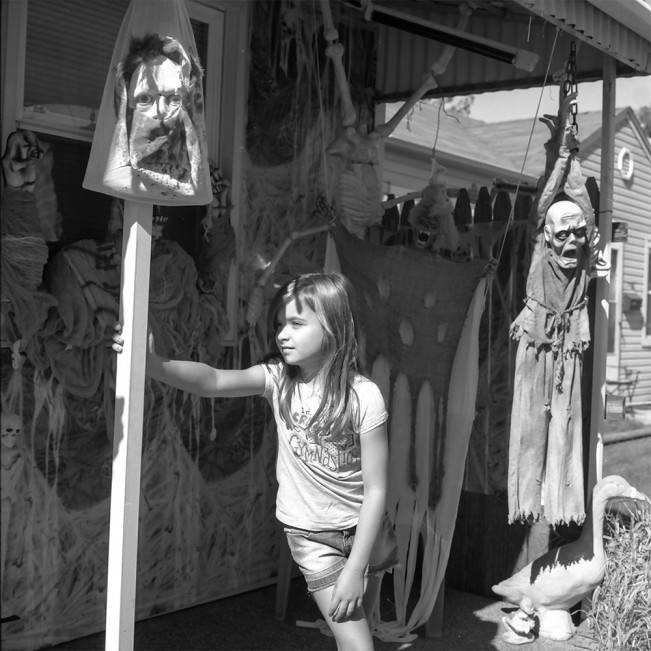 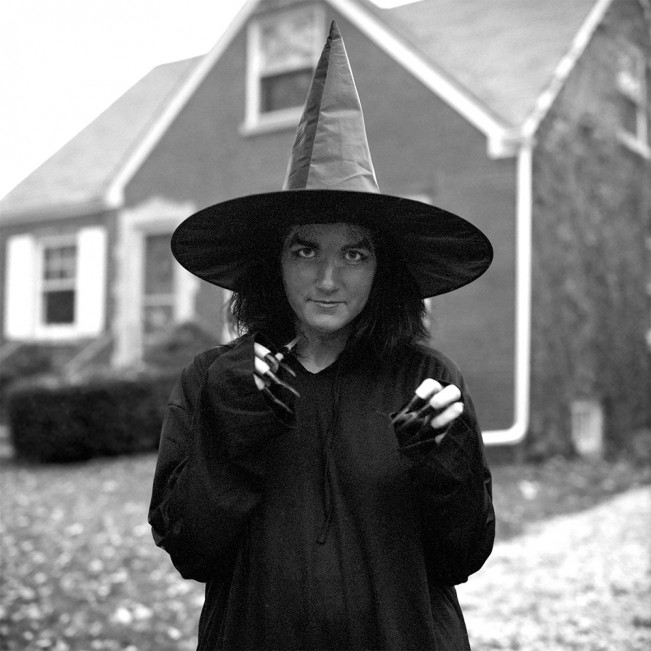 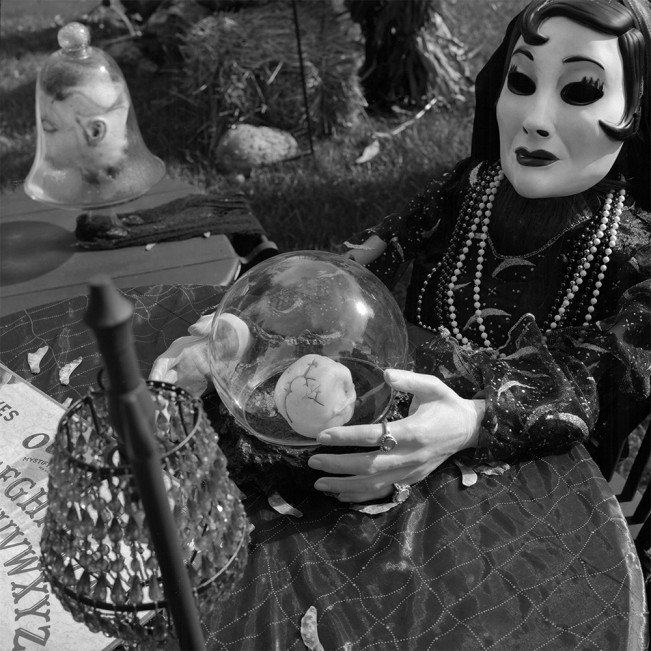 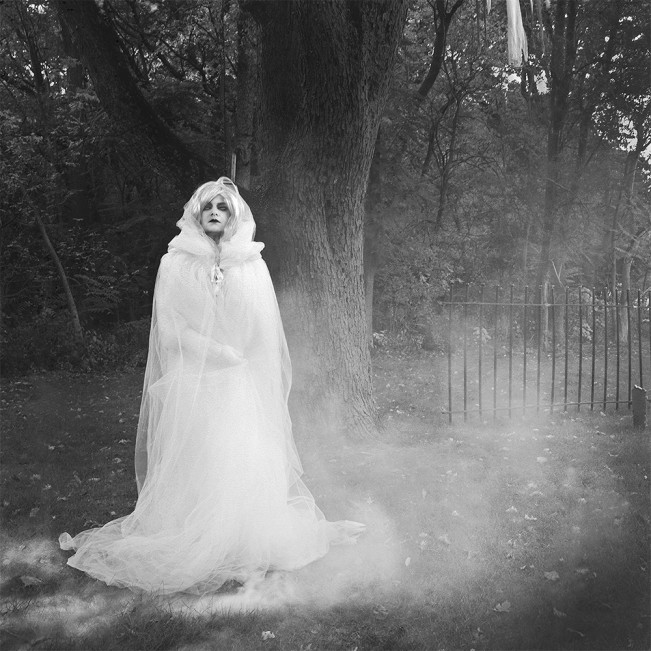 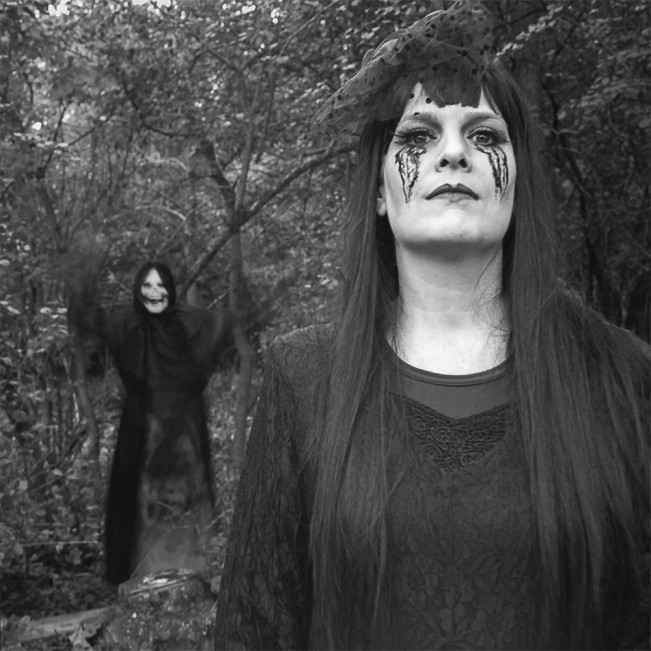 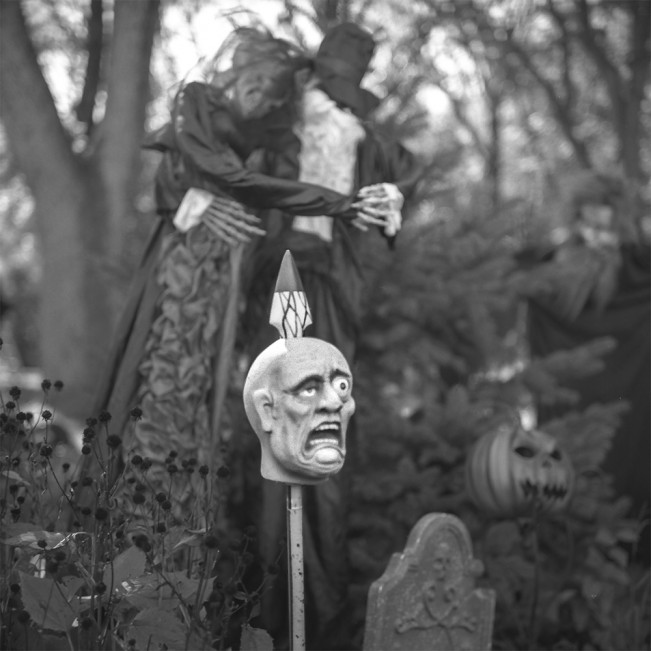 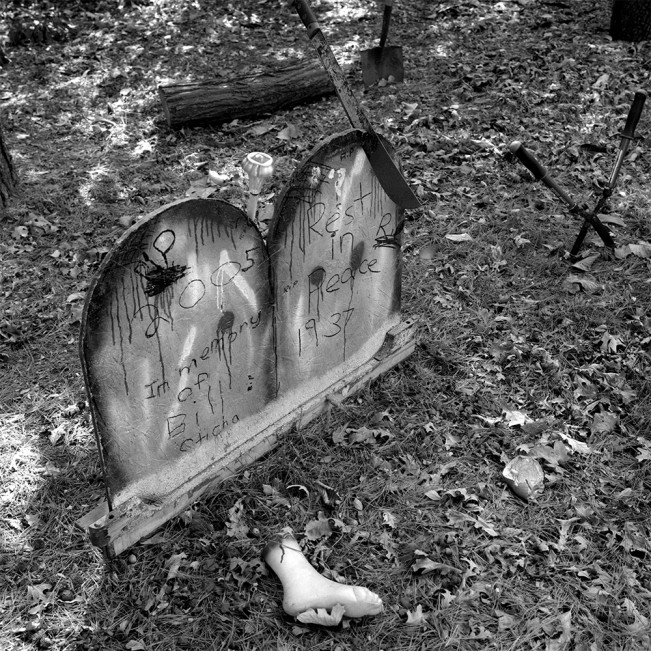 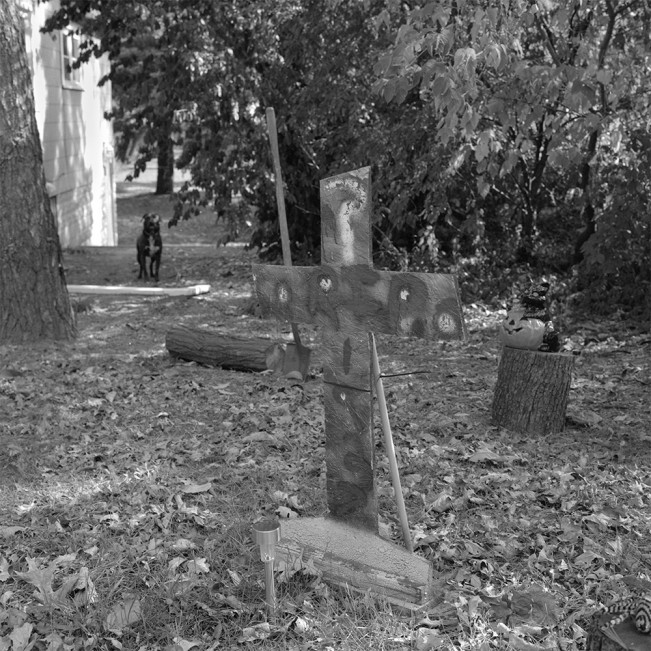 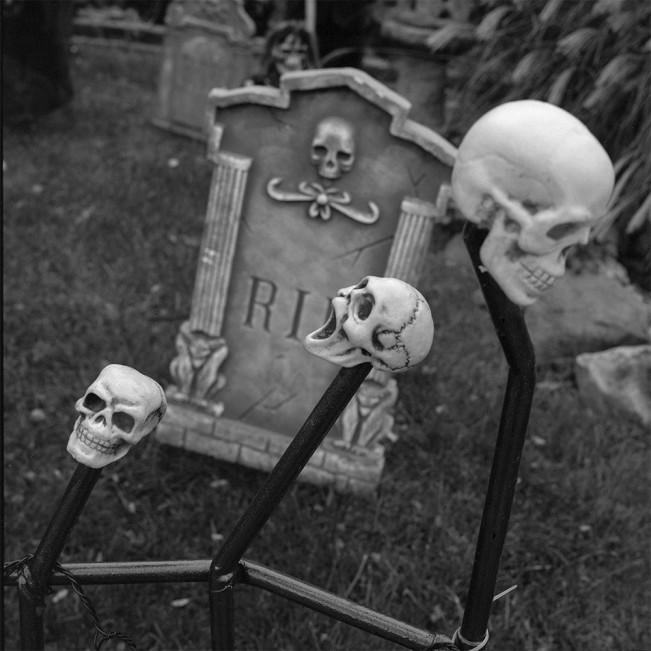 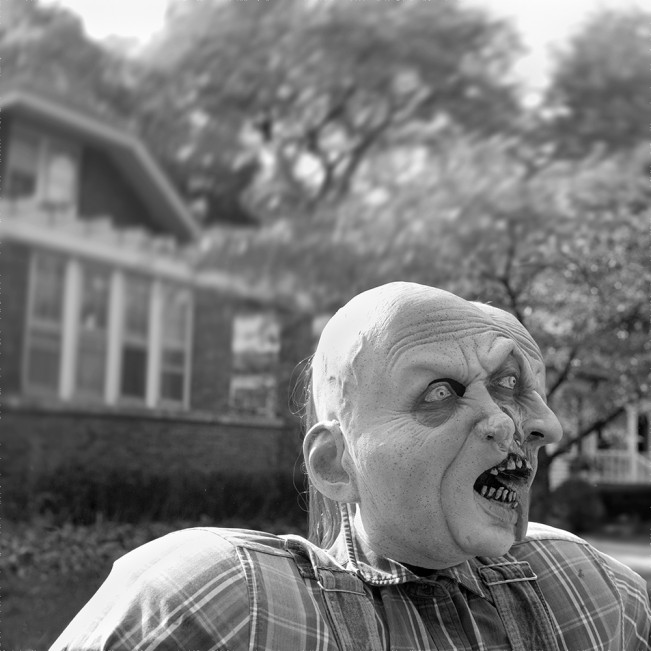 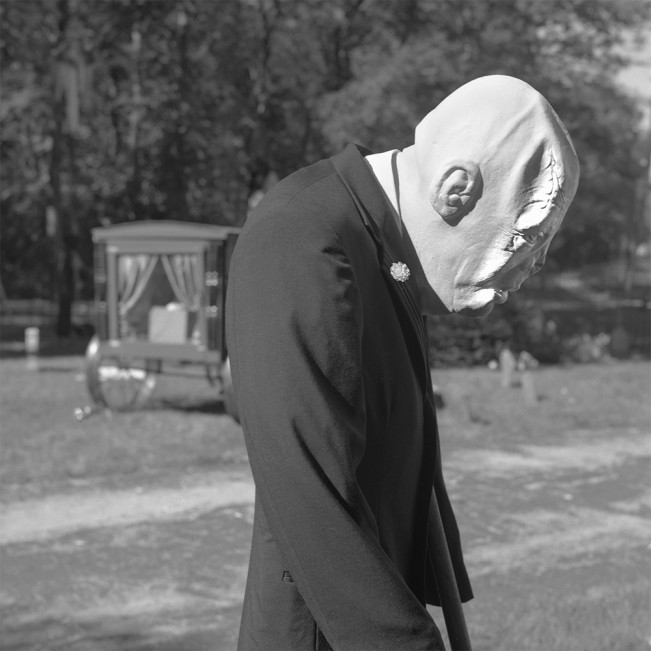