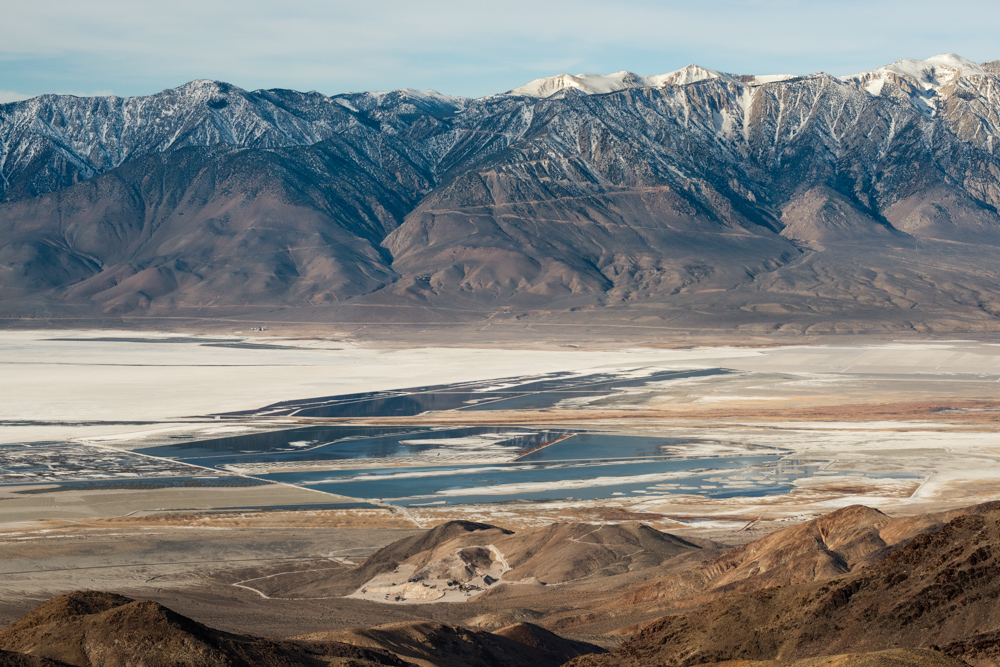 ©Jennifer Little, Owens Dry Lake viewed from above the Dolomite Marble Quarry, Owens Valley, CA. Los Angeles’s dust mitigation project at Owens Lake has transformed the dry lakebed into an industrialized grid of berm roads, shallow flood zones, deep food ponds, gravel zones, and tillage mitigation zones. All of this infrastructure is supported by hundreds of miles of buried irrigation pipes and drip tubing. The gravel used in the gravel mitigation zone at the upper right of this photo is sourced from the Dolomite Marble Quarry in the foreground.

This week and next, Lenscratch will be sharing the CENTER Awards winners and the statements by the jurors to help understand their choices.

Jennifer Little, the third prize winner, has focused on landscape, not portraiture. Her documentary project examines Owens Lake, a dry alkali flat located 200 miles northeast of Los Angeles. According to Little, its dust has become the largest source of carcinogenic particulate air pollution in North America, the mitigation of which has cost the nation $1.3 billion to date. The photographs show a scarred, post-apocalyptic world that is seemingly endless. Her project reminds us that one of the essential roles of the camera is to show us, as T.S. Eliot wrote in The Waste Land, “fear in a handful of dust.”

To these three awardees, and to all those not on this very short list, I thank you on behalf of the CENTER for believing that seeing is a personal and creative act, and photography the perfect medium to explore our differences. 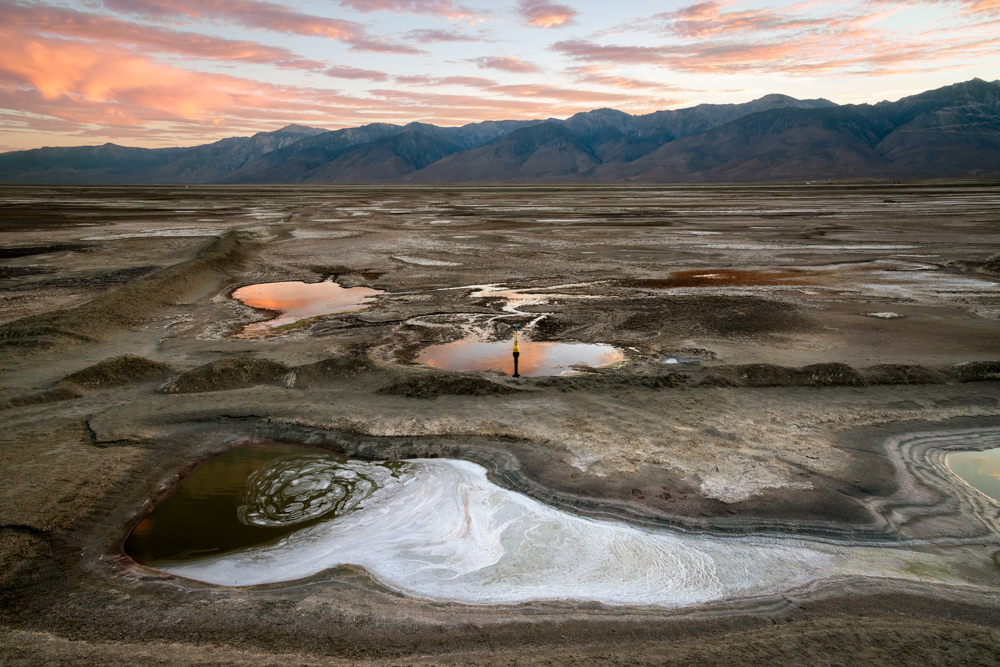 100 YEARS OF DUST:
Owens Lake And The Los Angeles Aqueduct

My series, 100 Years of Dust: Owens Lake and the Los Angeles Aqueduct, documents the latest chapter in a century of legal battles over water rights and air quality in Owens Valley, California. Owens Lake lies in Southern California’s Eastern Sierra Nevada Mountains, about 200 miles northeast of Los Angeles. This 110-square-mile lake began to dry up in 1913 when the City of Los Angeles diverted the Owens River into the Los Angeles Aqueduct. The new water supply allowed Los Angeles to continue its rapid growth and turned the arid San Fernando Valley into an agricultural oasis, but at a tremendous environmental cost. By 1926, Owens Lake was a dry alkali flat, and its dust became the largest source of carcinogenic particulate air pollution in North America. 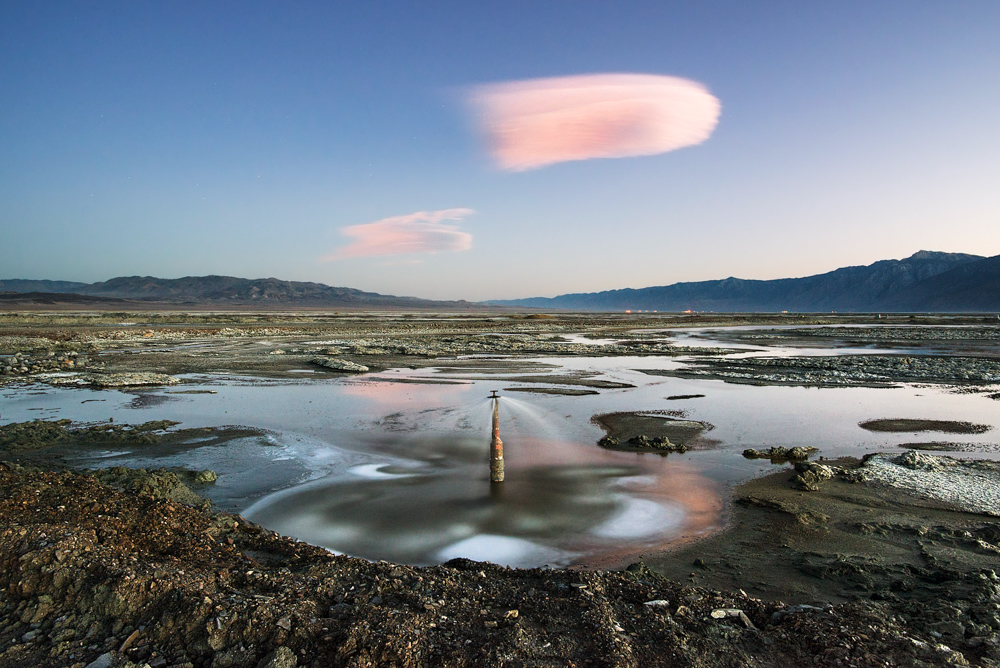 ©Jennifer Little, LADWP Irrigation Pipe, Owens Lake, CA. Los Angeles has built one of the largest environmental mitigation projects in the world at Owens Lake, with ongoing annual maintenance costs around $40 million. A permanent staff of 60 to 65 LADWP employees is required to maintain the very extensive irrigation and dust mitigation infrastructure at Owens Lake. Hundreds more contract employees are brought in for each construction phase.

In 1998, the Environmental Protection Agency mandated that the Los Angeles Department of Water and Power (LADWP) take steps to minimize the toxic PM-10 dust pollution from Owens Dry Lake. This pollution was 100 times greater than federal air safety standards. LADWP began construction on the Owens Lake Dust Mitigation Project in the year 2000. They have installed 42 square miles of dust mitigation zones, including gravel cover, managed vegetation, buried drip tubing, and irrigation bubblers to shallow flood the dry lakebed. Their dust mitigation program has cost $1.3 billion to date and requires so much water that it may not be sustainable as climate change results in a drier climate for California. 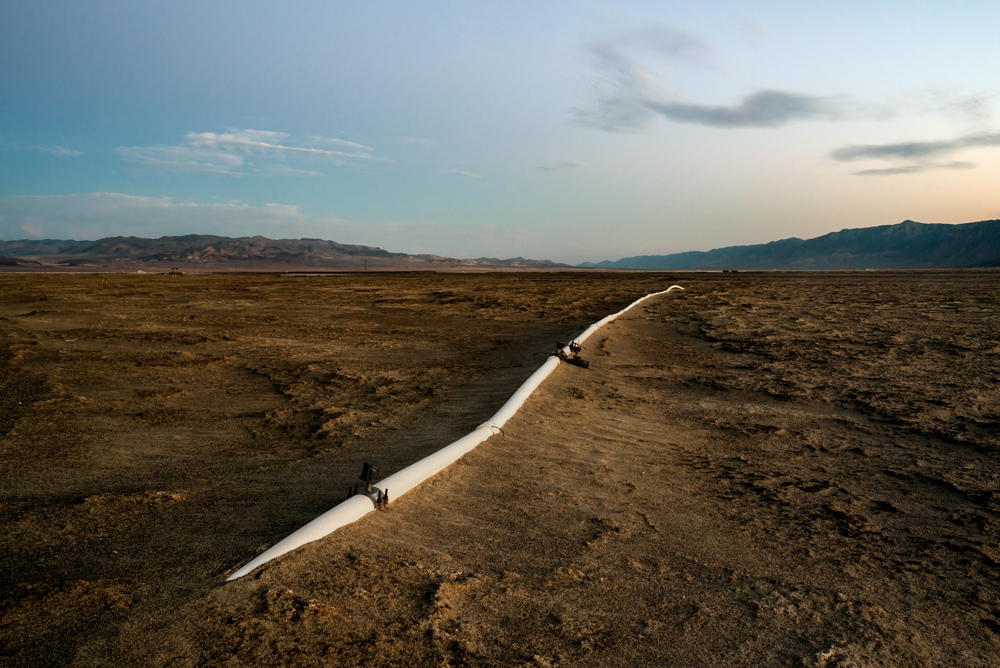 ©Jennifer Little, LADWP Shallow Flood Irrigation Bubbler, Owens Lake, CA. Half of the water that feeds the Los Angeles Aqueduct is now used for environmental mitigation projects in the Owens Valley and the Eastern Sierra. LADWP is replacing most of that water supply with increasingly limited water from the California Aqueduct. This water comes primarily from the Sacramento and the Feather Rivers in Northern California. 2015’s record breaking drought is a reminder that water resources in the Western United States are both extremely limited and interconnected, especially as global warming results in a drier climate.

The sordid history of Owens Valley and the Los Angeles Aqueduct is an important cautionary tale about modern civilization and the ill-conceived hubris of our water engineering projects. We cannot afford to forget how delicately interconnected ecological systems are as we deal with the impacts of climate change. The LADWP of today has not learned the lessons of its past. They are trying to mitigate the negative environmental impacts of the LA Aqueduct—the largest aqueduct engineering project of its day—with a massive, expensive, and extremely high maintenance new environmental engineering project that is the largest of our day. 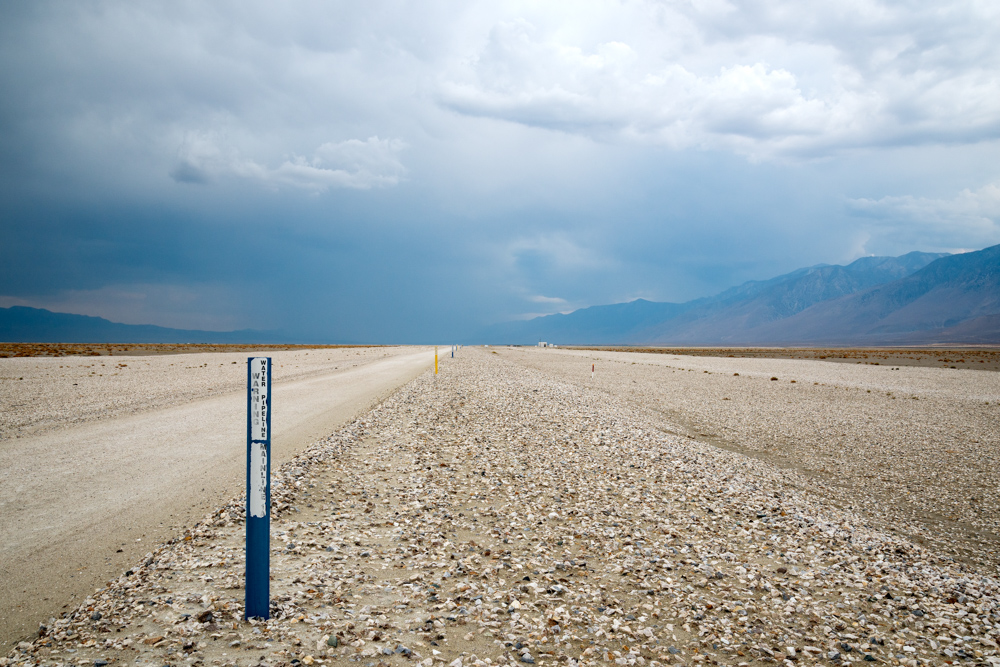 ©Jennifer Little, LADWP Gravel Mitigation Zone, Owens Lake, CA. The LADWP has covered a little over 2 square miles of the Owens Lake playa with gravel for dust control. Gravel has been used in the smallest area because it is the most expensive mitigation technique with a construction cost of $25 million per square mile. Gravel cover is now being expanded in construction Phases 7a, 9, and 10 to save water. 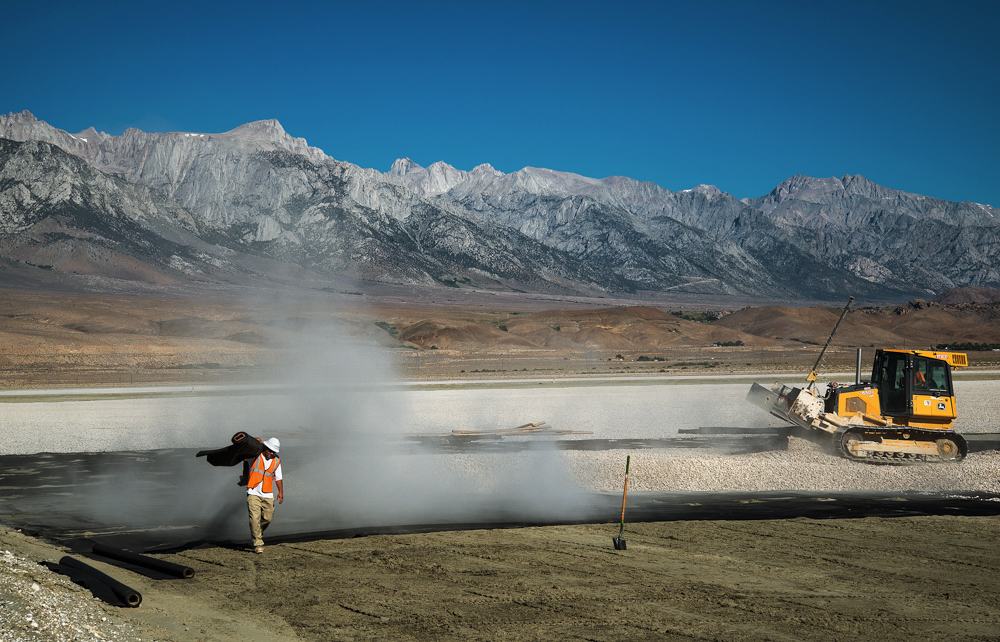 ©Jennifer Little, LADWP Gravel Mitigation Construction, Owens Lake, CA. Construction contractors from Barnard Construction lay geo-textile fabric down on the Owens Lake playa before covering it with exactly 2 inches of gravel. The gravel has to be redone periodically because it, too, fills with dust. 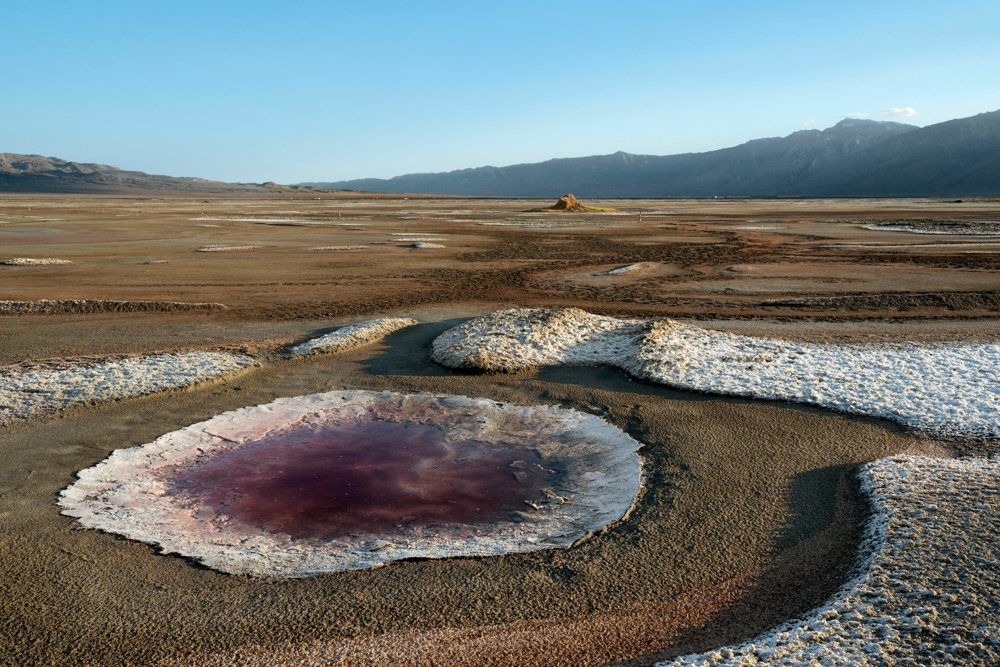 ©Jennifer Little, Salt Formation in Dry LADWP Shallow Flood Irrigation Zone, Owens Lake, CA. The LADWP implements a summer dry down for their irrigation at Owens Lake between July 1 and September 30. The worst winds and dust storms occur during the rest of the year—especially between March and May—which is considered the primary dust control season. During the summer dry down, shallow flood ponds are allowed to evaporate, leaving behind bizarre, man-made salt formations. 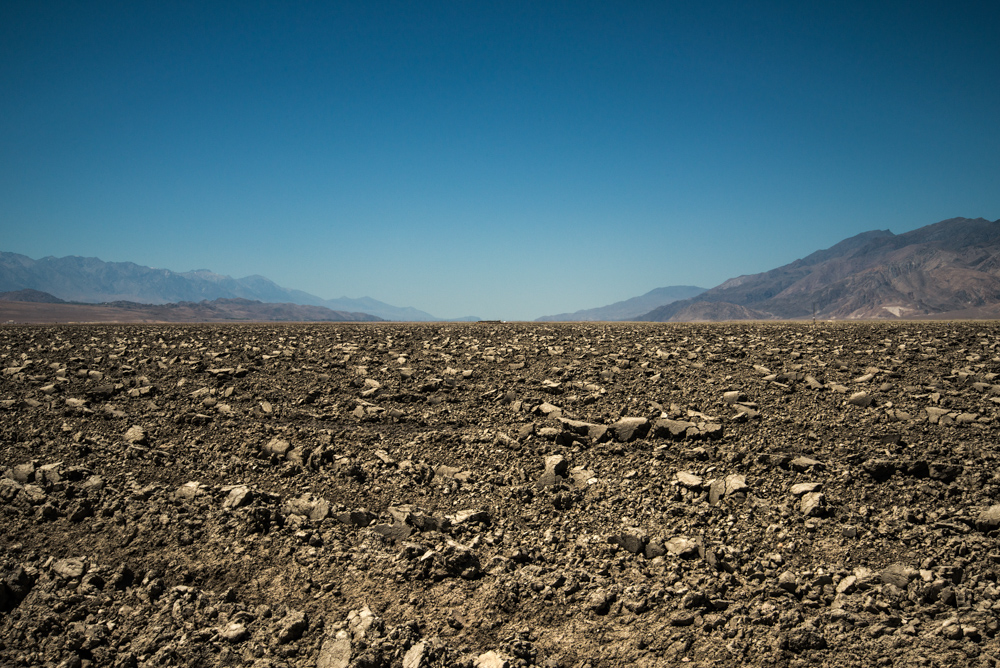 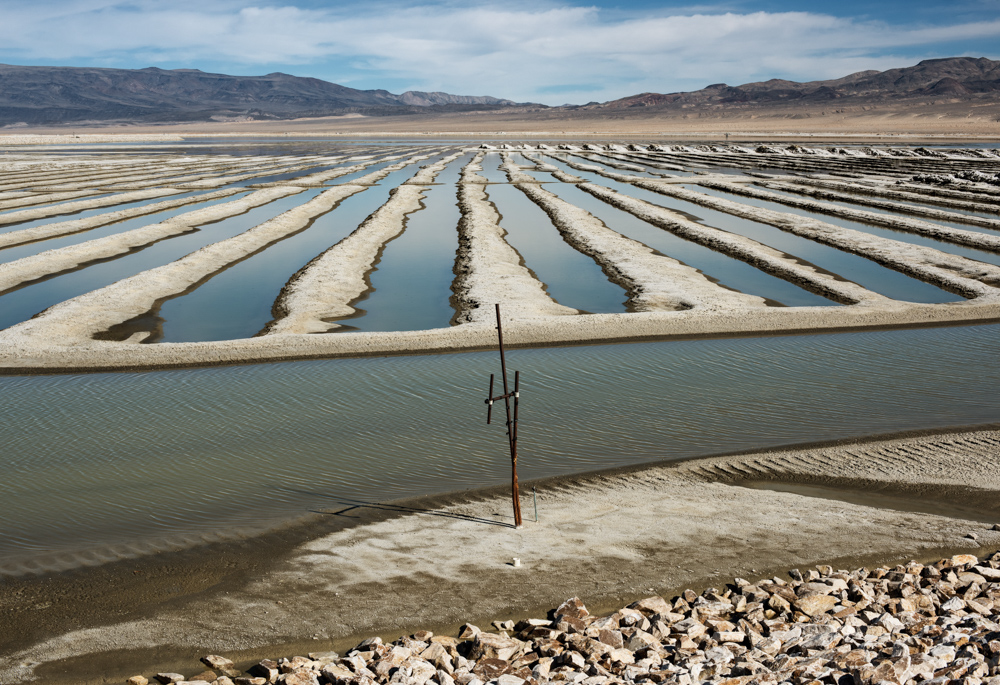 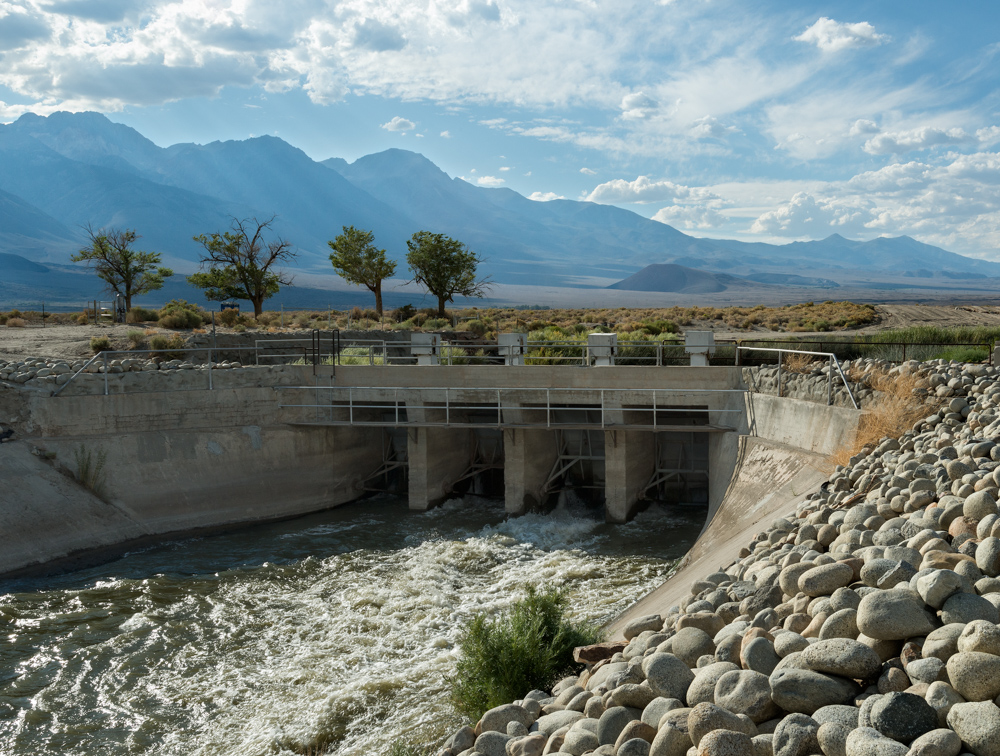 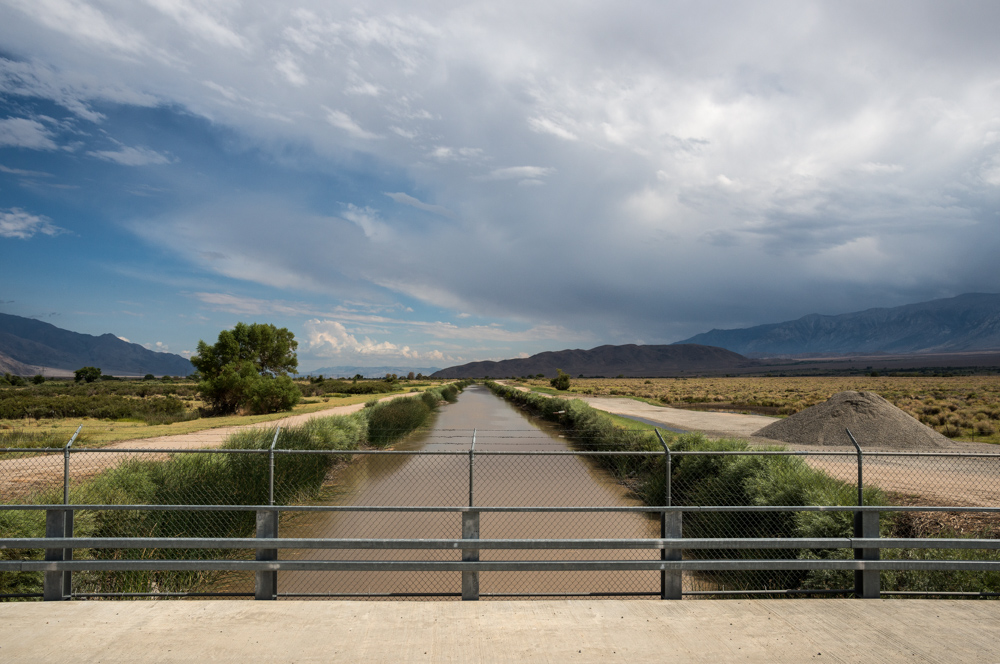 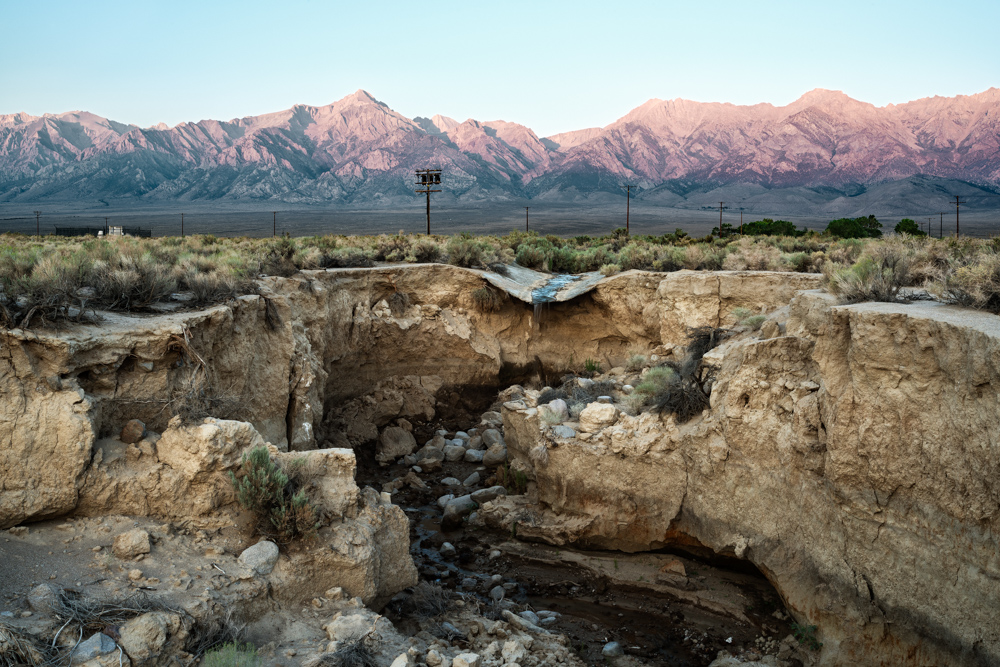 ©Jennifer Little, Symmes Creek Subsidence, Owens Valley, CA. This valley along the upper section of the LA Aqueduct was a wetland meadow before Los Angeles began pumping the groundwater in the early 1970s. The subsidence shown here is a direct result of the Los Angeles’s excessive groundwater pumping. LADWP tried to stabilize the subsidence by paving over the creek bed, but it eventually collapsed anyway. Active groundwater pumps surround this subsidence immediately to the north and south. 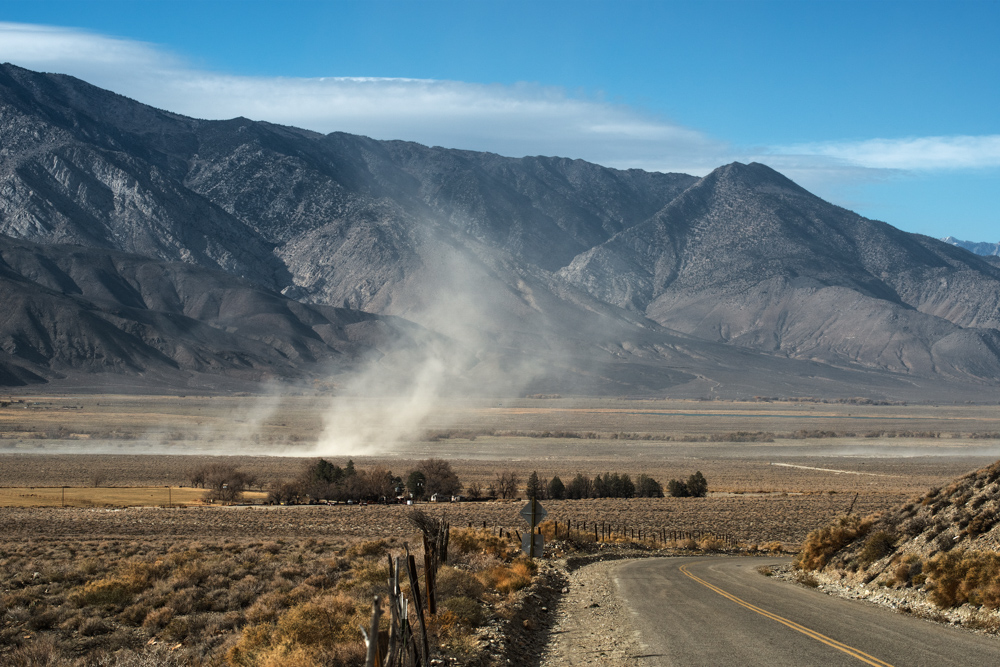 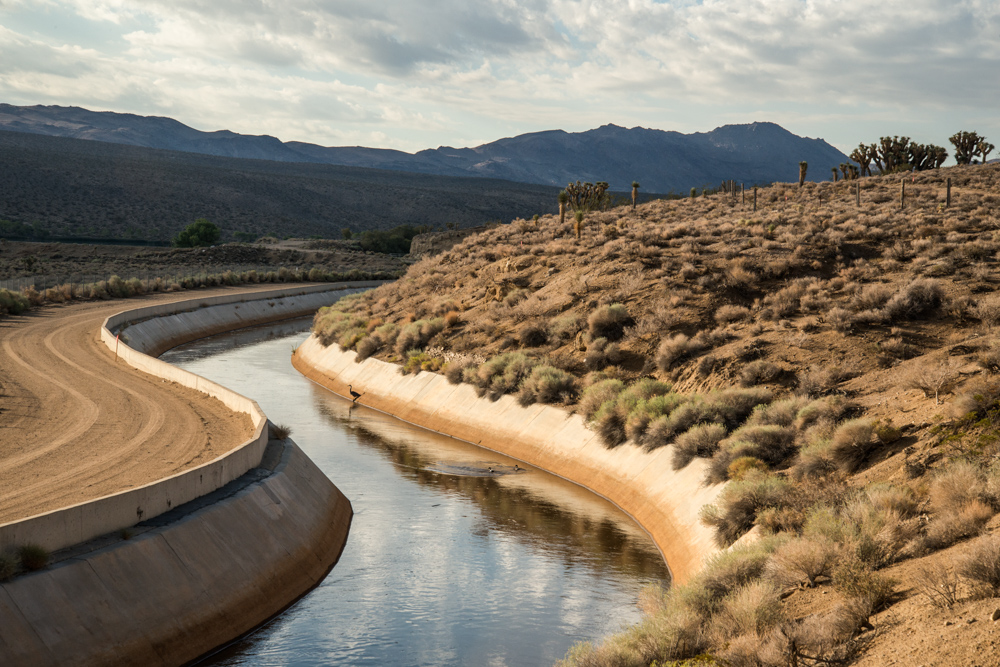 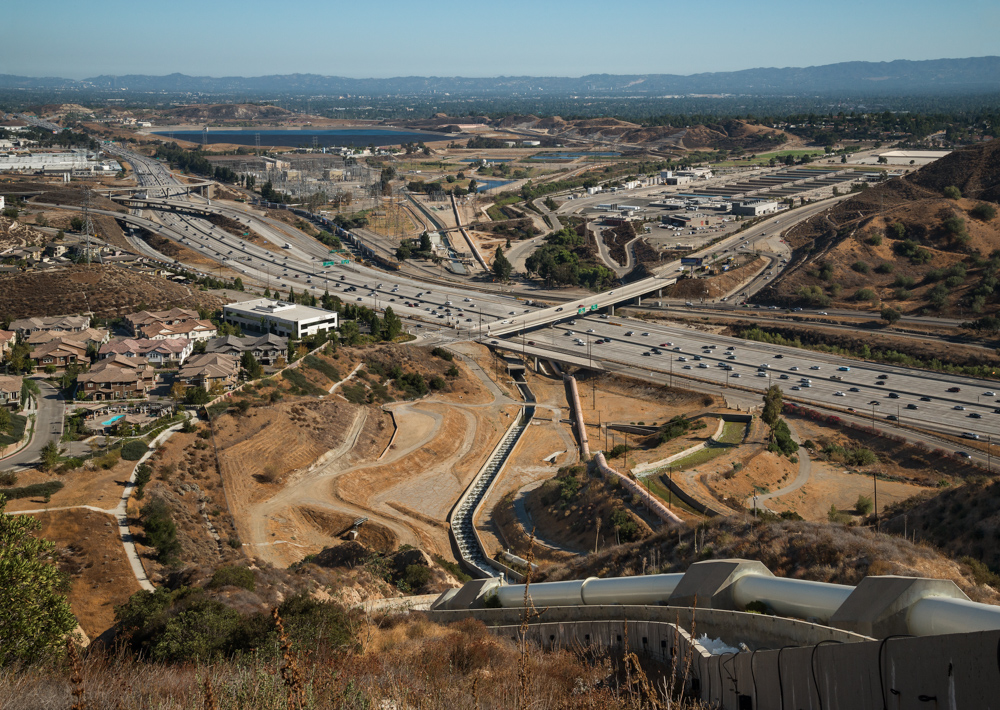