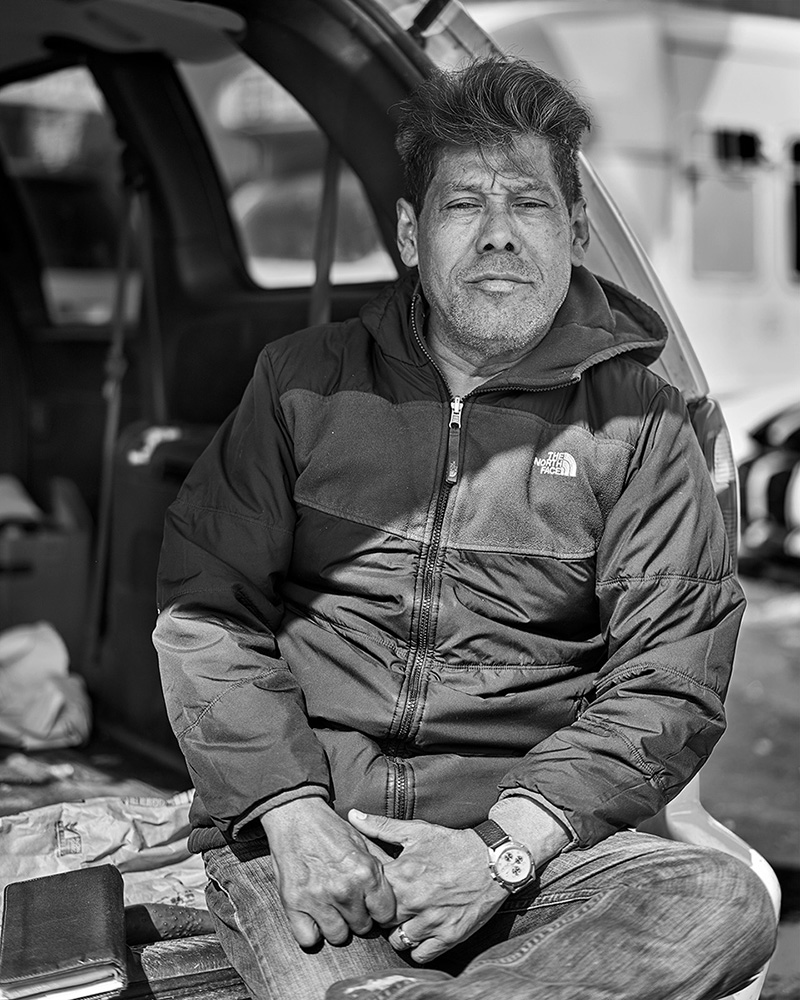 ©Greg Brophy, 30 Years, Maurico has been working in Willets Point for 30 Years. While there he showed us the multiple scars from injuries

Greg Brophy’s series, The Iron Triangle, pays homage to the disappearing steel-clad landscape and the working class champions of Willets Point, Queens, New York. Brophy set out to photograph the neighborhood to document the area before sanitized, and homogenous structures displace the current social fabric in a proposed redevelopment by the city. Unfortunately, a convention center or sterile shopping center will soon take its place.

Brophy’s images of the gritty Queen’s site do not romanticize the raw quality of the environment, even in classic black and white. The reality of junkyards dogs, discarded tires, and litter are evident in the pictures, as is the reality of the working class folks trapped by the desire to make a living, albeit for minimum wage. The portraits tell courageous and unfortunate stories through faces, gesture and a disheveled environmental backdrop. Many of the subjects gaze directly into the camera with strength and power that is attributed to Brophy’s ability to make them comfortable and to validate the importance of their working life as well as their presence as part of The Iron Triangle. Brophy seems to ask the viewer to respect this place and its people as he preserves its memory in the face of the redevelopment. He brings important issues to light about our cultural standards: the value of new and shiny structures versus the colorful faces of an industrial landscape and working class past. 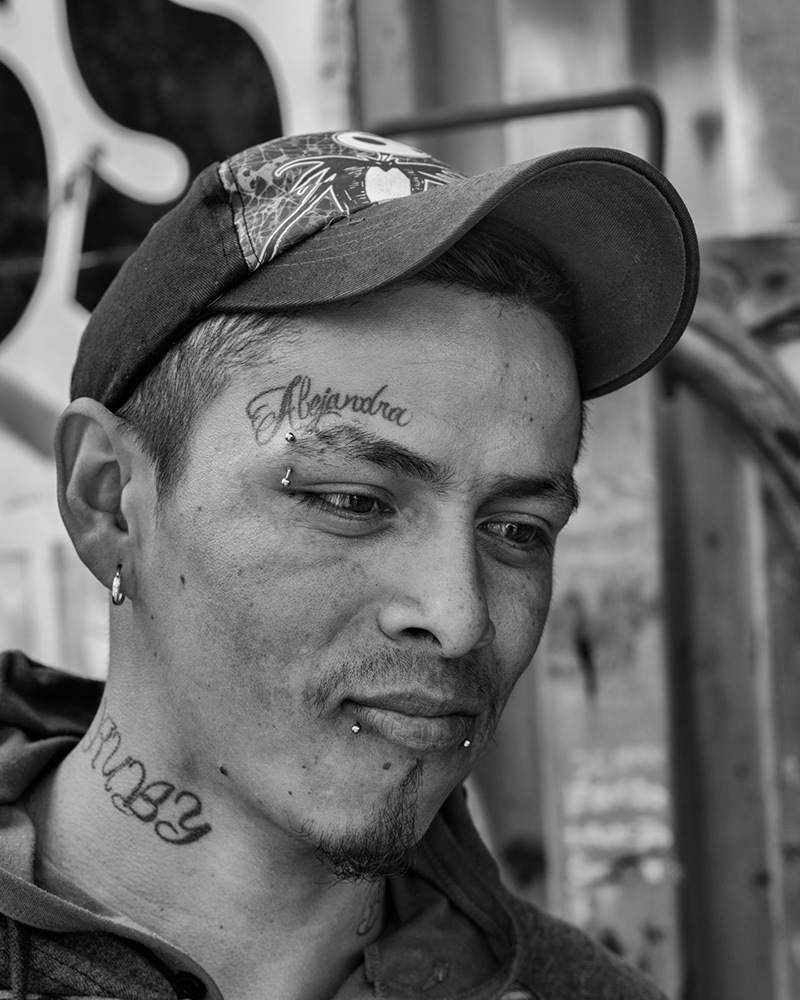 ©Greg Brophy, Alejandra, Angel is 25 years old and is from Mexico. He has a wife, Alejandra, and two kids still there that he sends money back to.

Greg Brophy is a Brooklyn-based photographer who documents New York’s disappearing neighborhoods and the void that is left there. He primarily works with medium and large format film and often uses alternative printing methods to connect the finished piece with the subject matter. 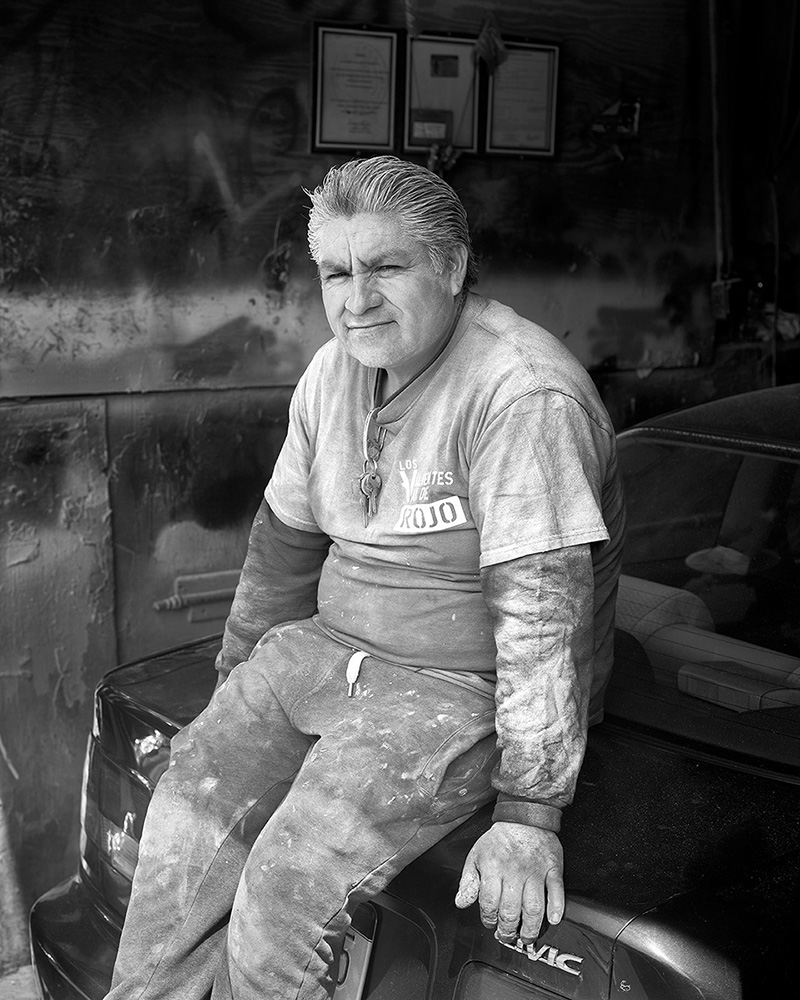 In a small corner of Queens in the shadow of Citibank Field there is a place that looks like the set of a dystopian movie. Willets Point, Queens, known for its junkyards, auto repair shops and recycling plants, has been nicknamed “The Iron Triangle” and for good reason. The streets are unpaved, cars are stacked on top of each other and tires float in puddles the size of lakes.

The businesses have been fighting a long battle with past and current NYC administrations over eminent domain, but they have lost. The area has now been slated for redevelopment. There has been talk about turning it into everything from an Olympic Stadium to a convention center. 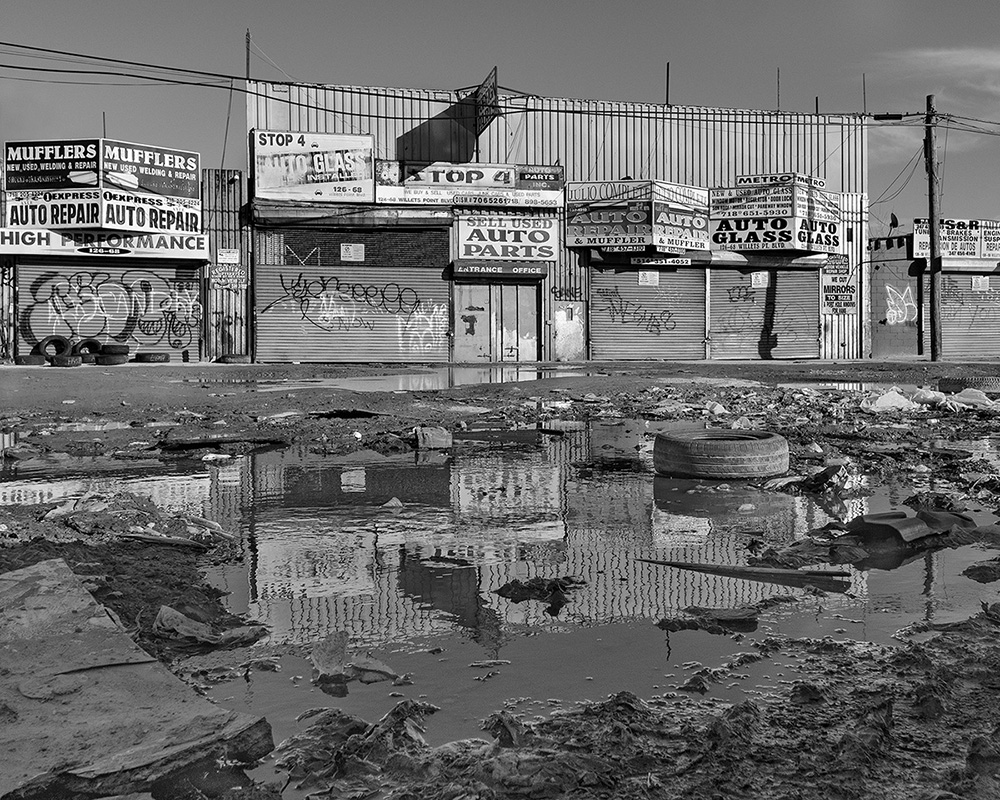 ©Greg Brophy, Blighted Infrastructure, The owners of the business there pay taxes, but have no running water or bathrooms. The roads are neglected and never plowed, leading to holes that look like lakes.

My motive in creating The Iron Triangle was to create a visual record of the area before it is all sanitized by shopping malls and frozen yogurt stands. To examine the stories of the people I met there – the immigrant worker whose family just left him; the small business owner being pushed out against his will; the people who work on minimum wage and are trying to get their car fixed cheaply because they need to get to work tomorrow.

These photographs show an area that was forgotten in time and asks the question: Does every place need to be completely developed? Is there no place for the run down, the beat up and untamed or does every corner of New York City have to be cleaned up and sanitized of its past? Willets Point is like a one eyed junk yard dog – only scary if you don’t know how to approach it. 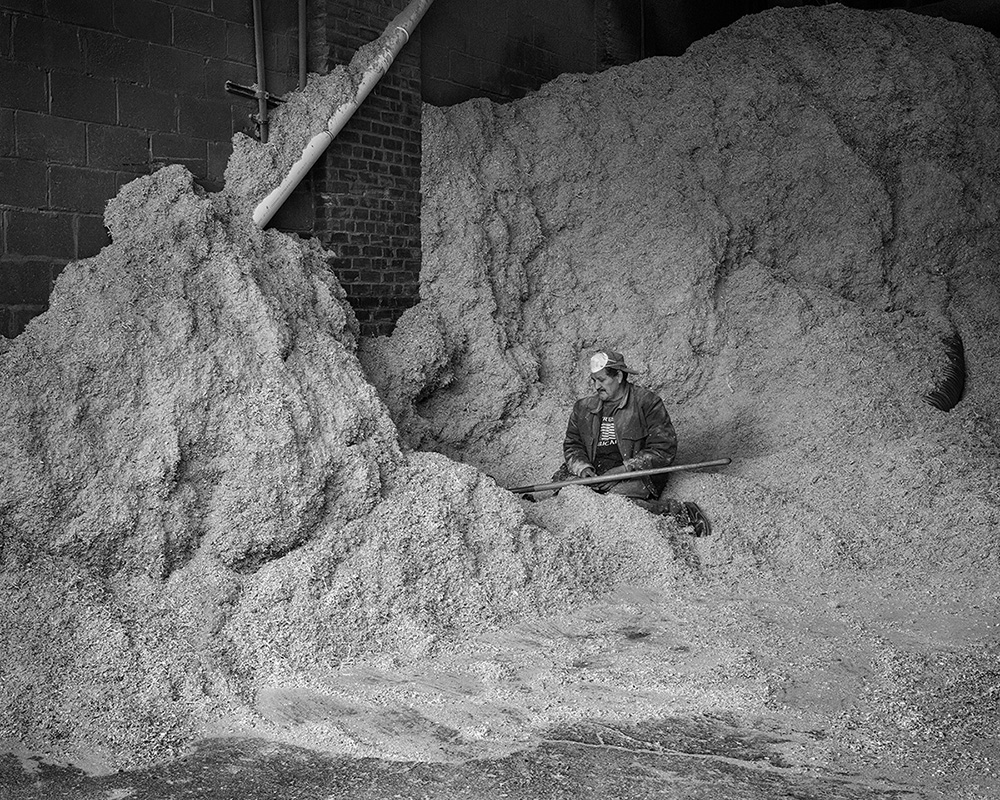 ©Greg Brophy, Buried, A worker from Bono Sawdust Co taking a break in a pile of sawdust. 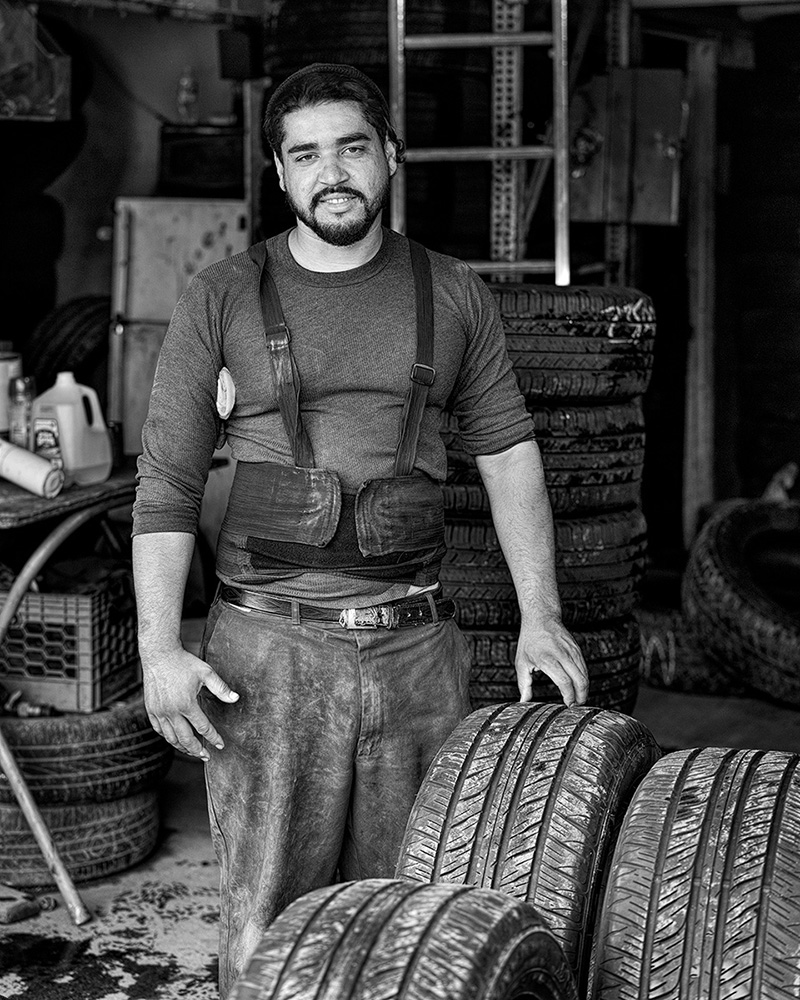 ©Greg Brophy, Felix, Felix works at one of the many tire repair shops 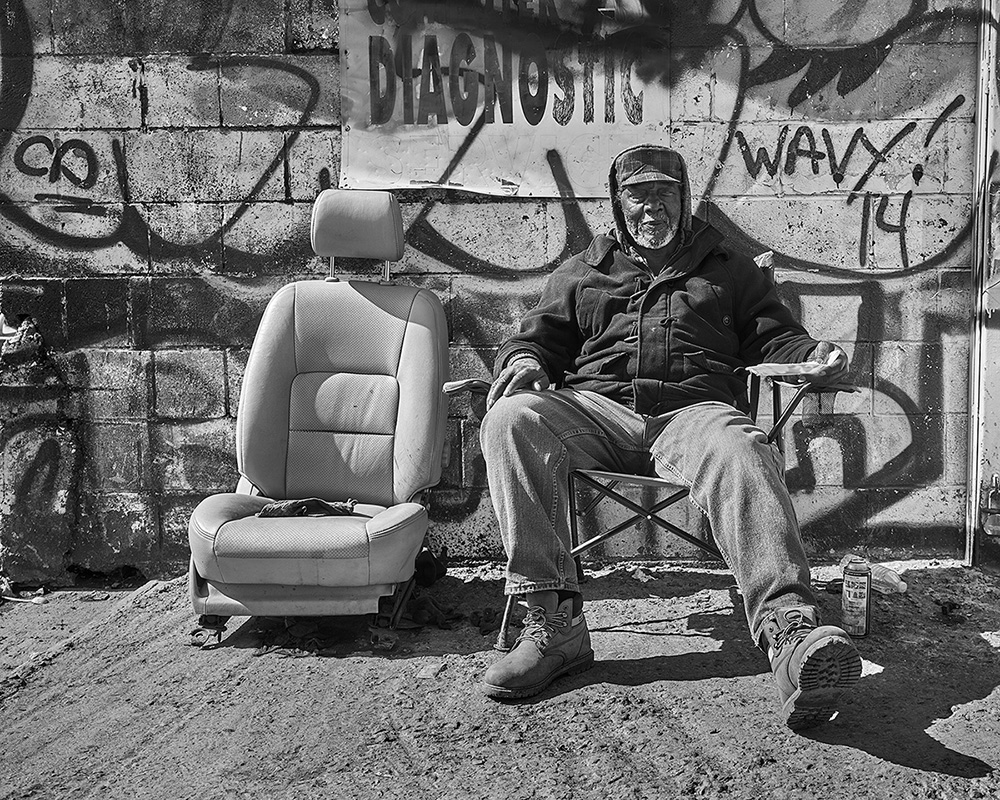 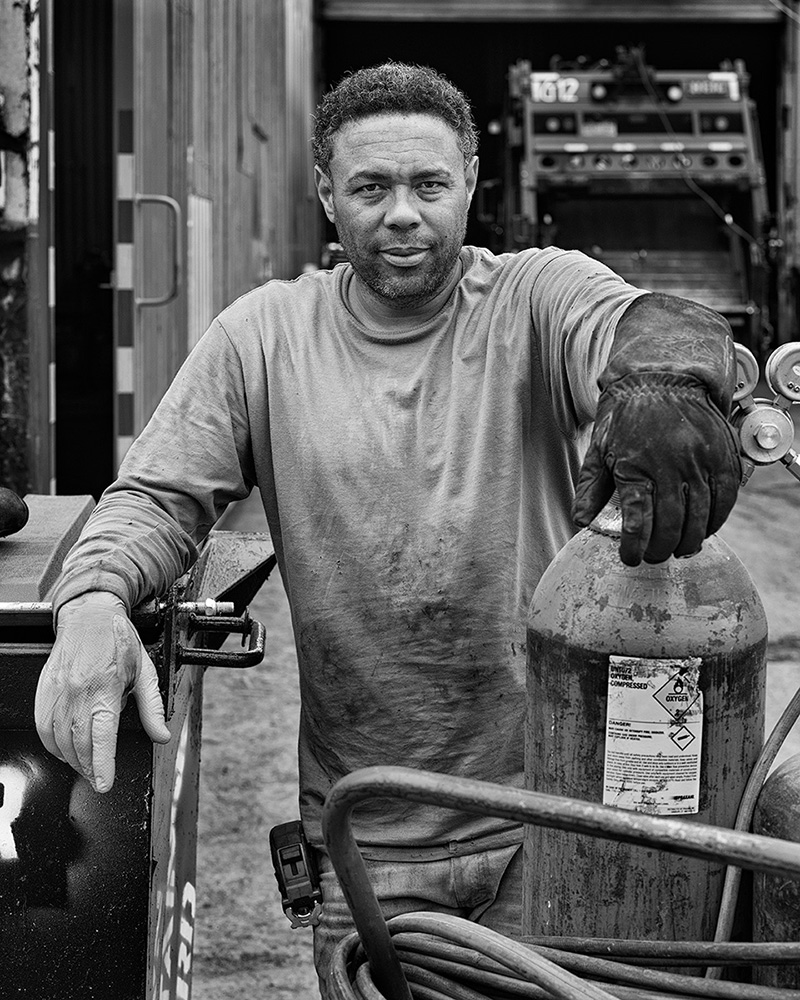 ©Greg Brophy, Junior, Junior is a welder from the Dominican Republic who has been in the US for 8 months. 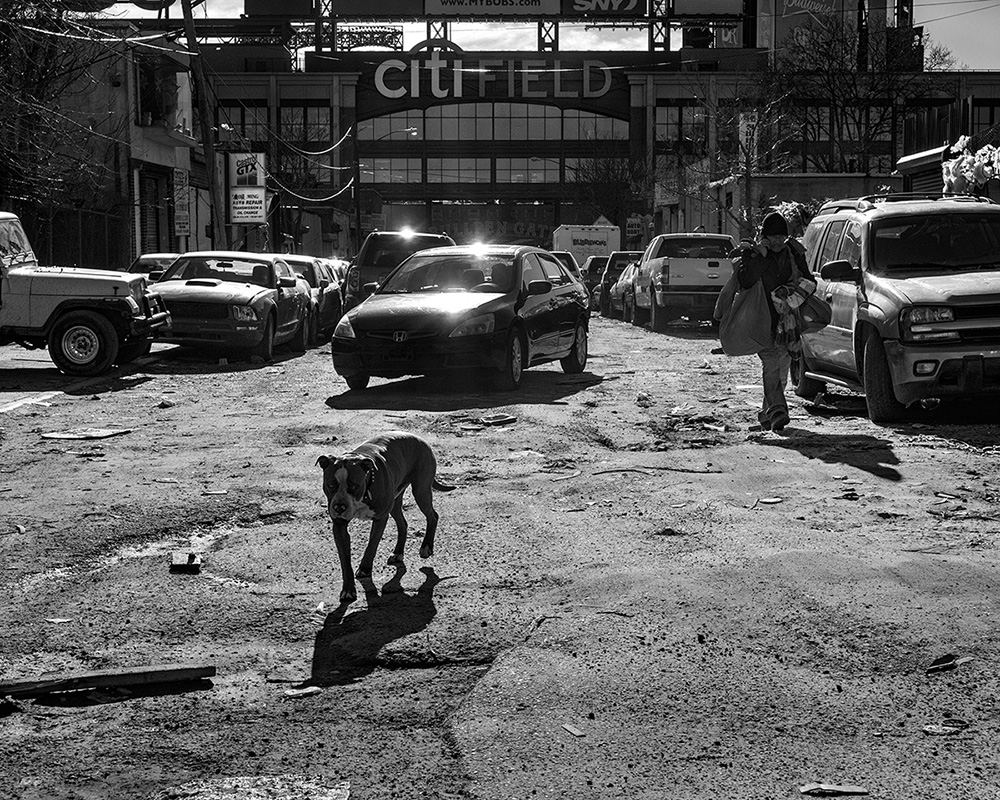 ©Greg Brophy, Junk Yard Dog, One of the many neglected streets that show the proximity to the CitiField Stadium that is slowly taking over. 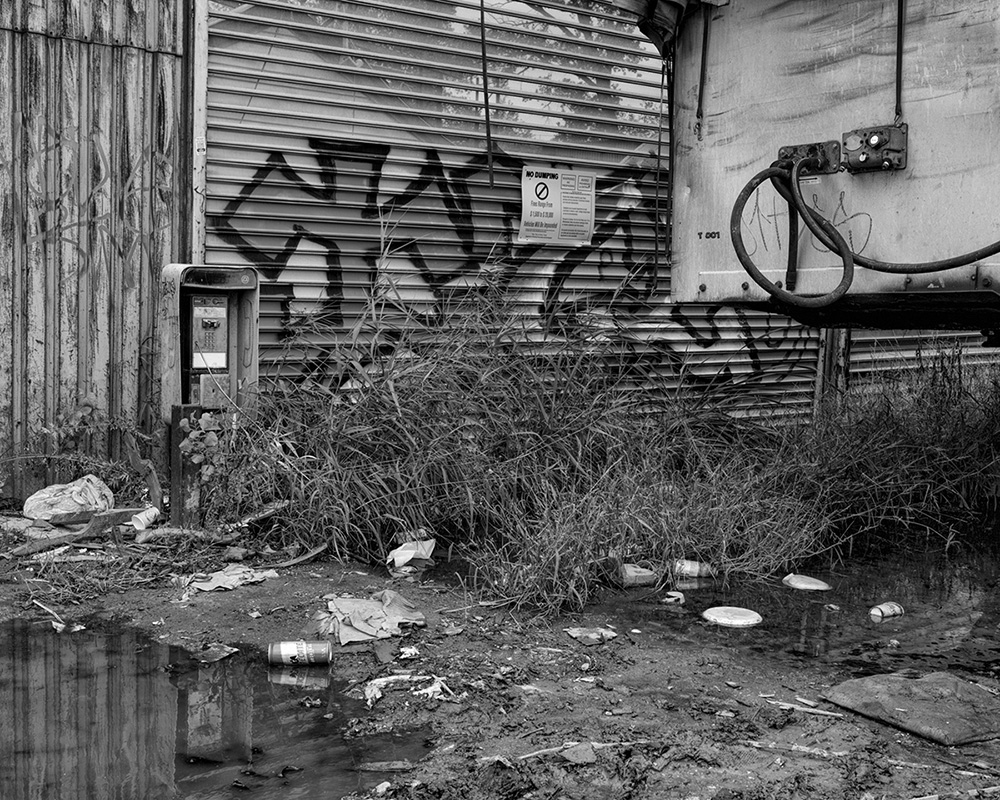 ©Greg Brophy, Life Line, One of the now many closed business that are being turned into a parking lot. 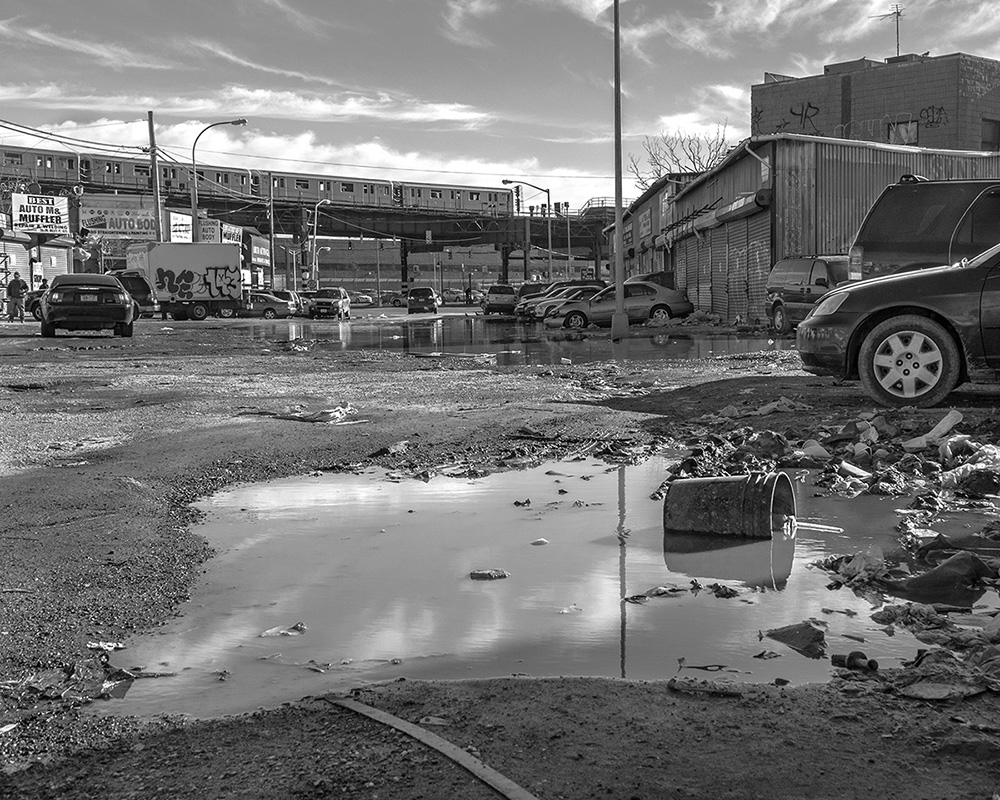 ©Greg Brophy, jpg No Bailouts Here, This photo is a few years old. The whole area is now gone and turned into a parking lot. 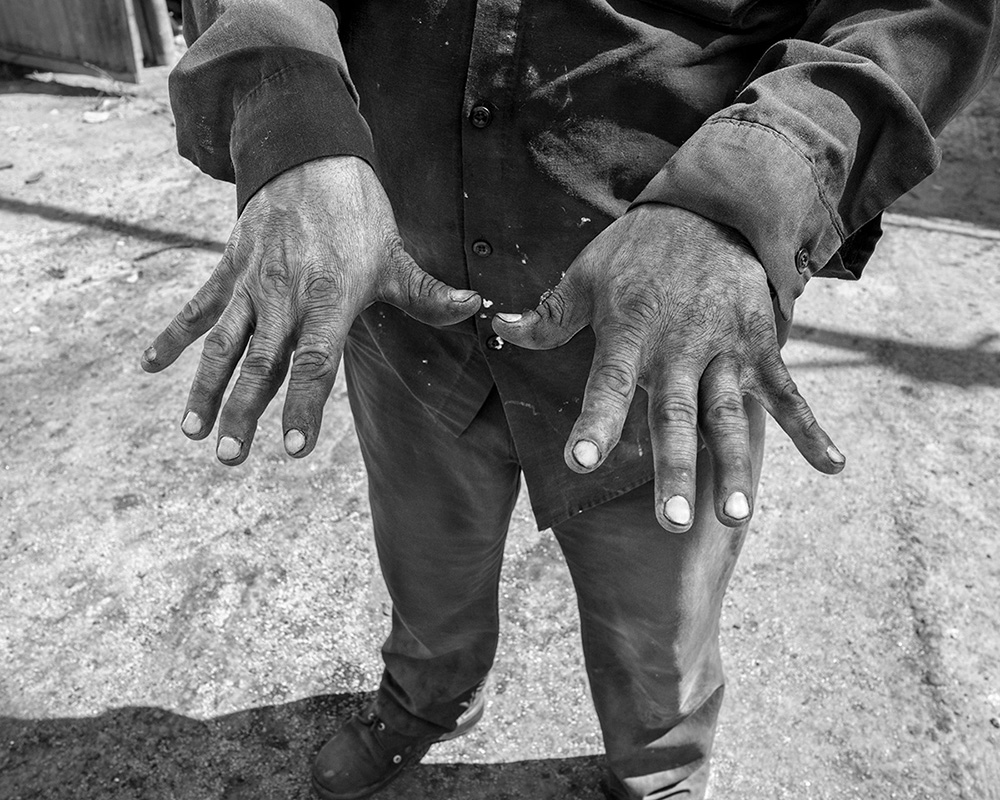 ©Greg Brophy, Part Carbon Part Iron, Louis shows me his hand and all the injuries he has sustained 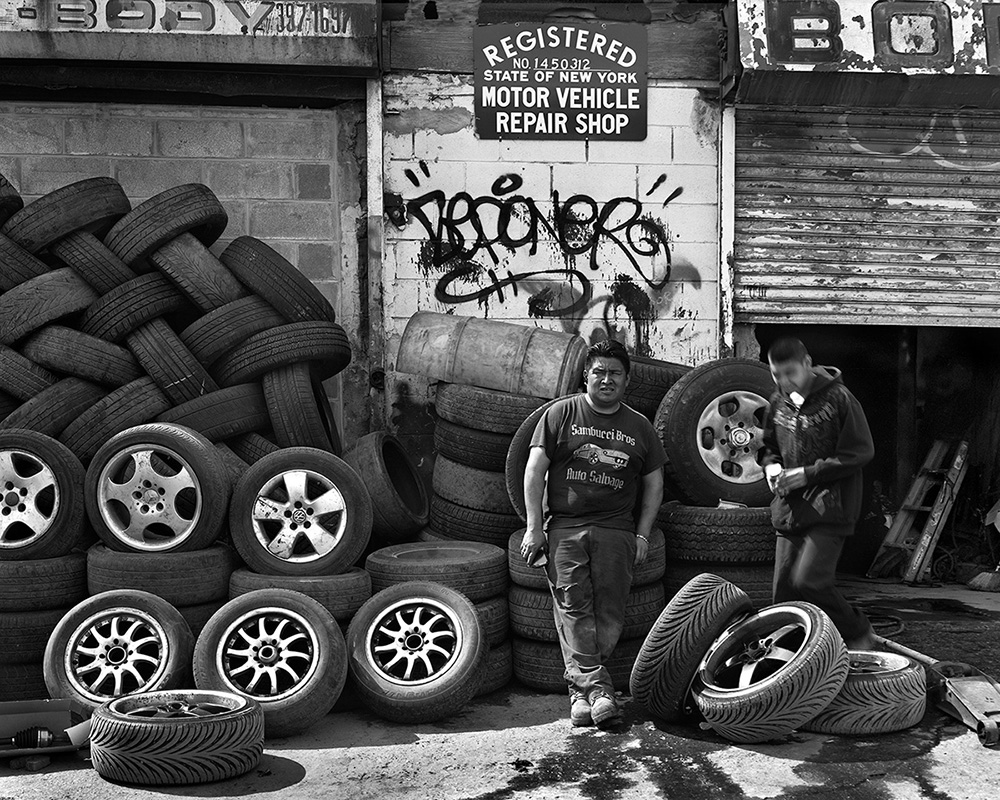 ©Greg Brophy, Registered, Sambucci Bros, one of the many businesses that relocated to Flushing Queens. 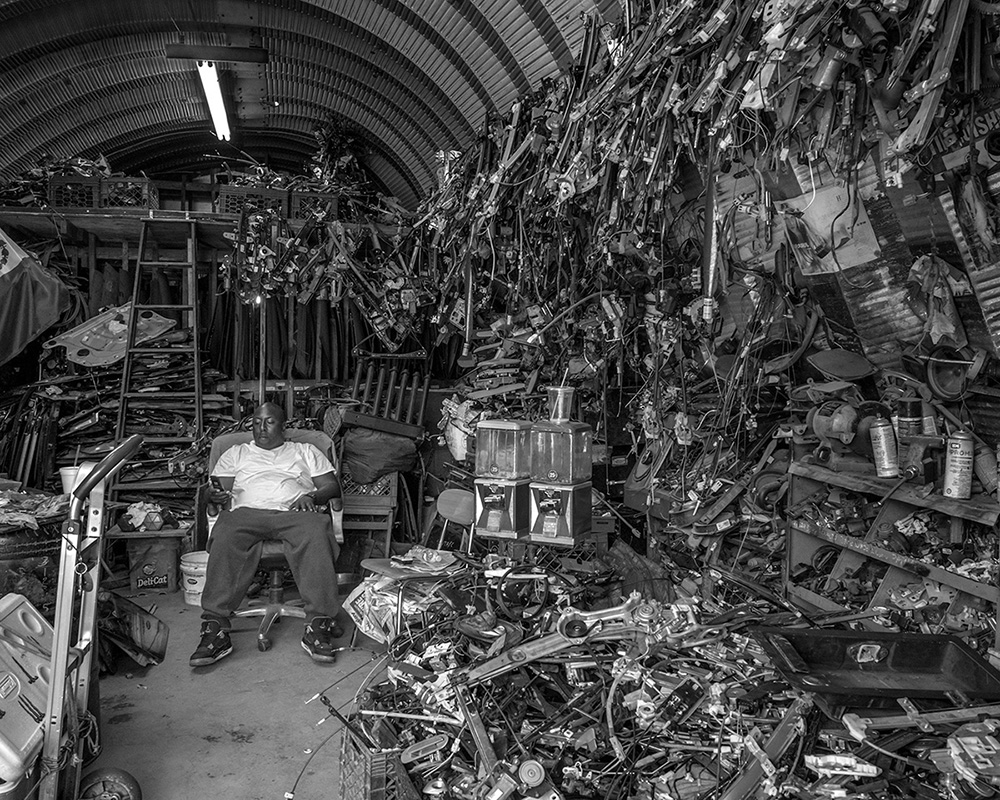 ©The Persistence of Steel, A customer waits while his car gets fixed. 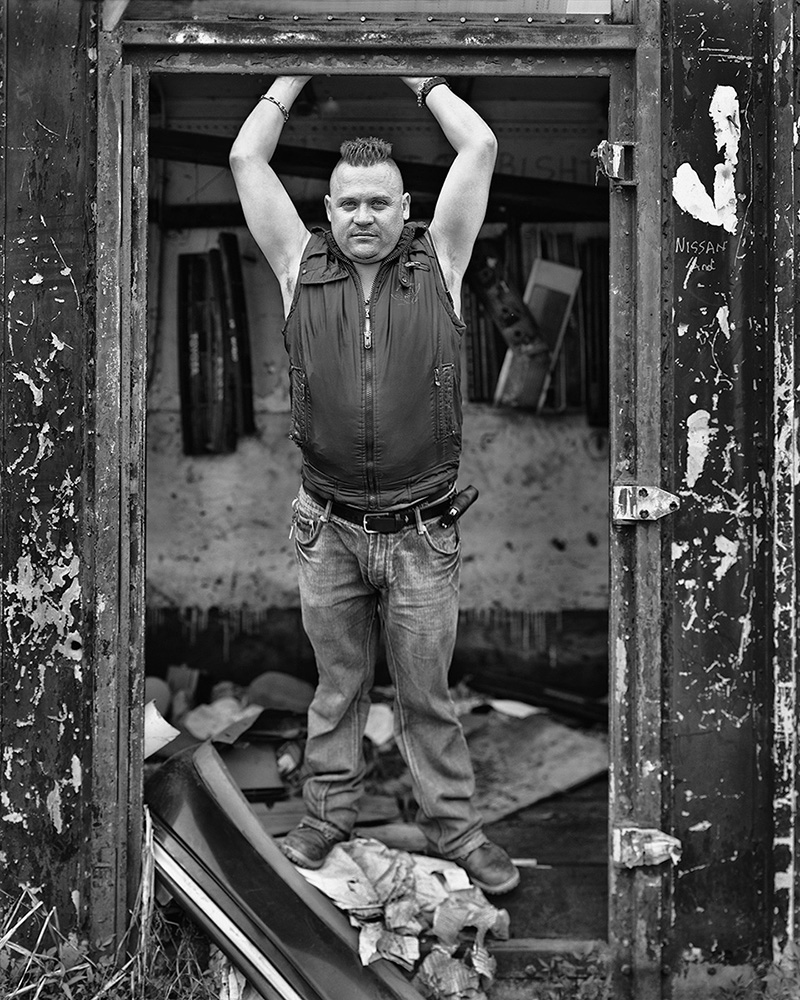 ©Greg Brophy, Trapped, I met Juan the day his wife and daughter took everything they owned and left him without saying a word. He was walking around with a bucket that contained turtles that belonged to his daughter.