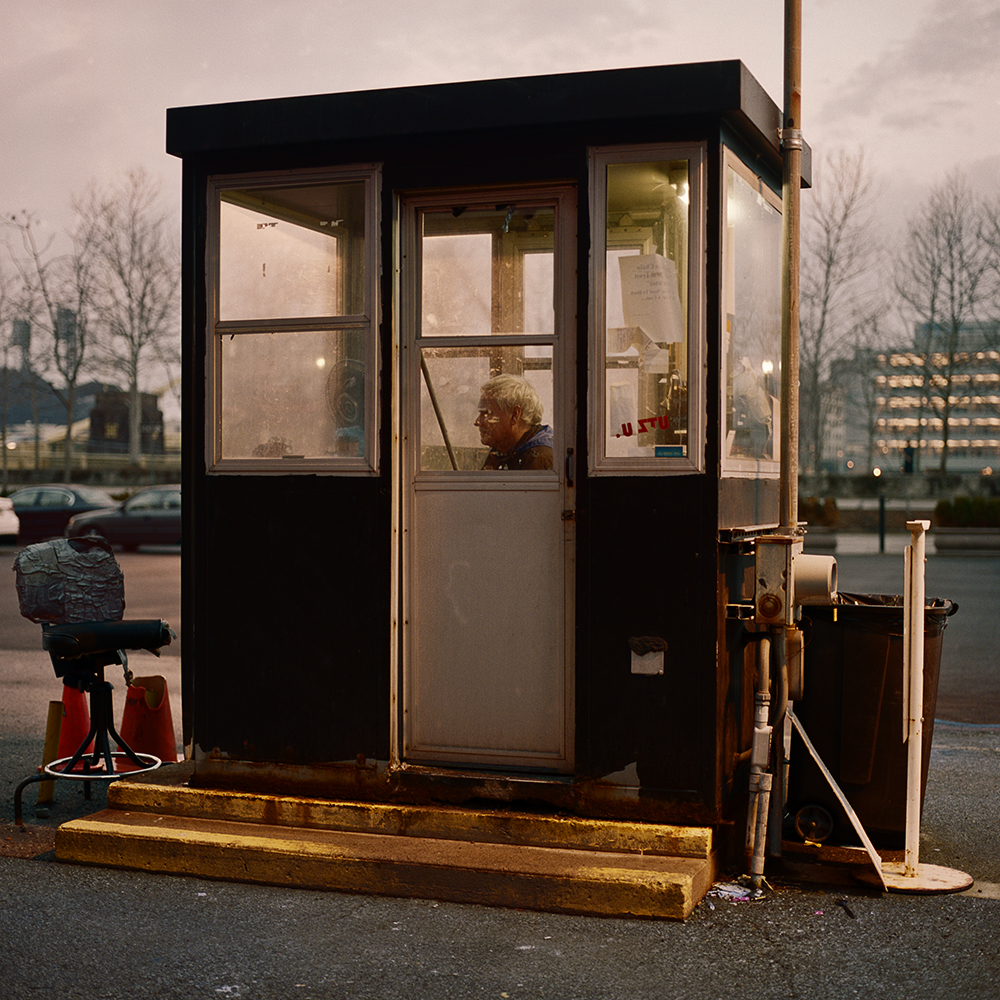 Photographer Tom M. Johnson is a long time west coast friend who moved to Pittsburgh a couple of years ago. Like any transplant or immigrant, it was at first, difficult to make the transition. As a editorial and advertising portrait photographer and an artist, it required him to reset his compass and focus, but most importantly what Tom packed in his suitcase was his curiosity and humanity. Many of Tom’s personal projects focus on place–one of my favorites is about his childhood neighborhood of Lakewood, California, where he walked the streets capturing neighbors and strangers and details of daily life.  In Pittsburgh, he is back walking the streets with two projects, one of making portraits of a broad range of Pittsburgh residents with Pittsburgh Stories, and the second, a poignant typology of Pittsburgh Parking Lot Booths And Their Attendants featured today.

I’m a sucker for typologies, and this capture of lowly, ubiquitous structures and the people that spend their days inside them, is a wonderful portrait of place and people. Each has a personality of it’s own and by celebrating the ordinary, Tom has brought a dignity to his subjects. Tom’s work was recently featured in the September issue of Vanity Fair, his photographs accompanying the article, Harvard’s Club Brawl.

For over two decades Tom M Johnson photographed the most established and provocative artists, performers, and intellectuals inhabiting Los Angeles.  Yet, yearning to delve deeper into his vision and supplement his portrait work he began working upon long-term concepts.  First was “Lakewood: Portraits of a Sacred American Suburb.”  That project returned him to the humble middle-class suburb where he was raised to find souvenir images from his youth.  Next, he took a bit of a sabbatical to Paris: his home base when he worked all over Europe as a fashion model.  Paris awakened his visual senses, which ultimately inspired him to become a photographer.  There he rode the city’s elaborate metro system to each of its 29 ends, “Au Bout de la Ligne,” to photograph a different Paris, the banlieue…  For the last 3 years Tom has lived in his new city, Pittsburgh “The Paris of Appalachia,” with his wife and 5 cats.   In addition to commissioned work with the New York Times, Los Angeles Magazine, AARP, Popular Mechanics, Pittsburgh Magazine, Pitt Magazine, and some of Pittsburgh’s ad agencies and design firms Tom has focused his attention on two new projects.  The first “Pittsburgh’s Parking Lot Booths and Their Attendants,” where he makes portraits of downtown Pittsburgh’s numerous eclectic parking lot booths and their tenants.  This project has been published in Popular Photography, Pittsburgh, Slate, and Fraction Magazines.  The second and ongoing project that Tom works on is “Pittsburgh Stories,” inspired by a lecture he attended shortly after moving to the city given by the mayor, Bill Paduto.  In Pittsburgh Stories Tom seeks out those Pittsburghers that give the city its color, texture, and character– someone you might find at a Steeler game, on the strip, downtown, or at one of Pittsburgh’s iconic bars: the type of folks who can make your day with a smile and remind you why Pittsburghers are loyal and proud of their city. 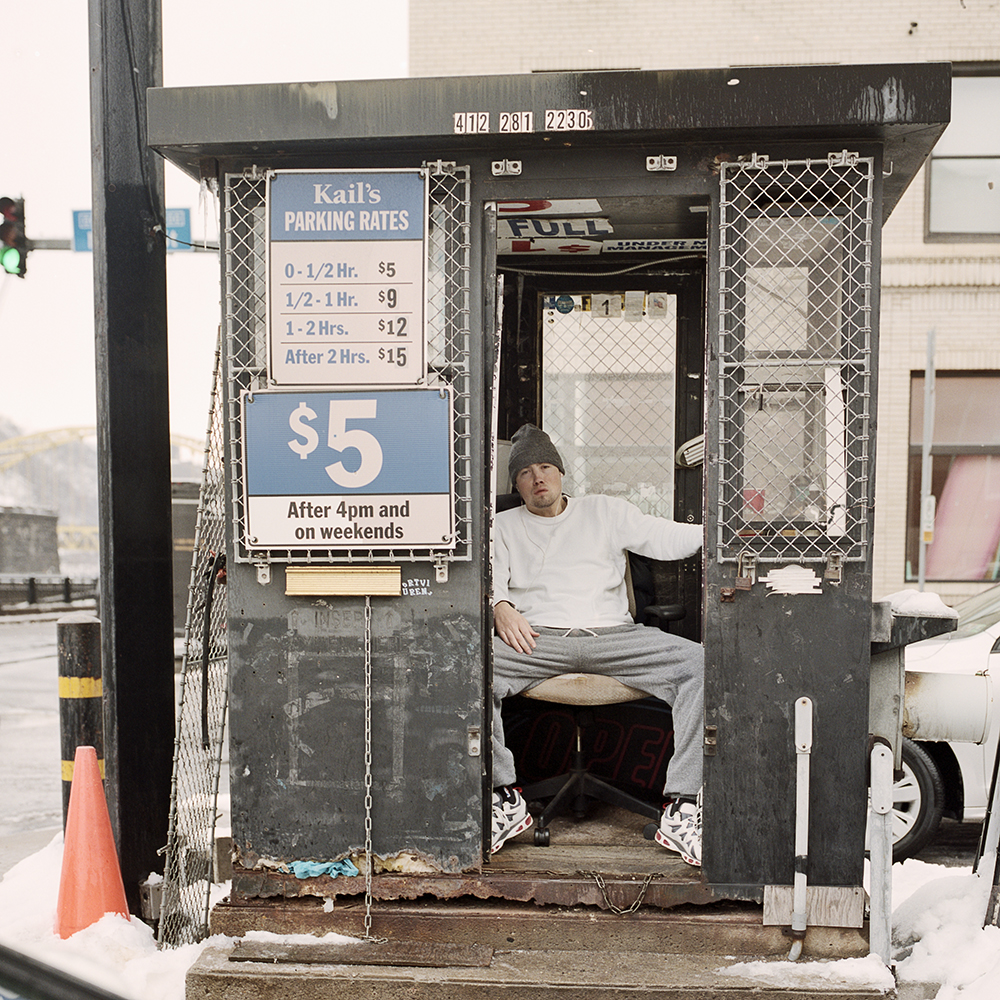 One of my first commissions in Pittsburgh was to photograph the parking lots in the Cultural District.  On a chilly late December afternoon, as the purple sky surrendered to the city lights, I was struck by the isolation of a parking lot attendant sitting in his booth.  Through the booth’s weathered Plexiglas I sensed his melancholy, alone with nothing other than his thoughts to keep him company. Like this man I am often alone and isolated. I felt a connection to him.

Pittsburgh has marginal public transportation, so most commuters from surrounding suburbs are in need of places to park.  Around lower Pittsburgh there are many parking lots — some large and corporate, others small and privately owned.  Most are ground level and typically tended to by a single attendant, who takes payment and organizes the comings and goings of the commuters.

I am drawn to the architecture of the booths because they fit nicely within my preferred format: square.    I photograph them not as obscure structures but as portraits of inanimate objects with a unique character shaped by years of harsh climate and the wear of multiple tenants.

This project is an equal study of both the booth and the attendant. Their relationship is symbiotic. The attendant needs the booth for comfort, protection and function. The booth needs its occupant for significance. – Tom M. Johnson 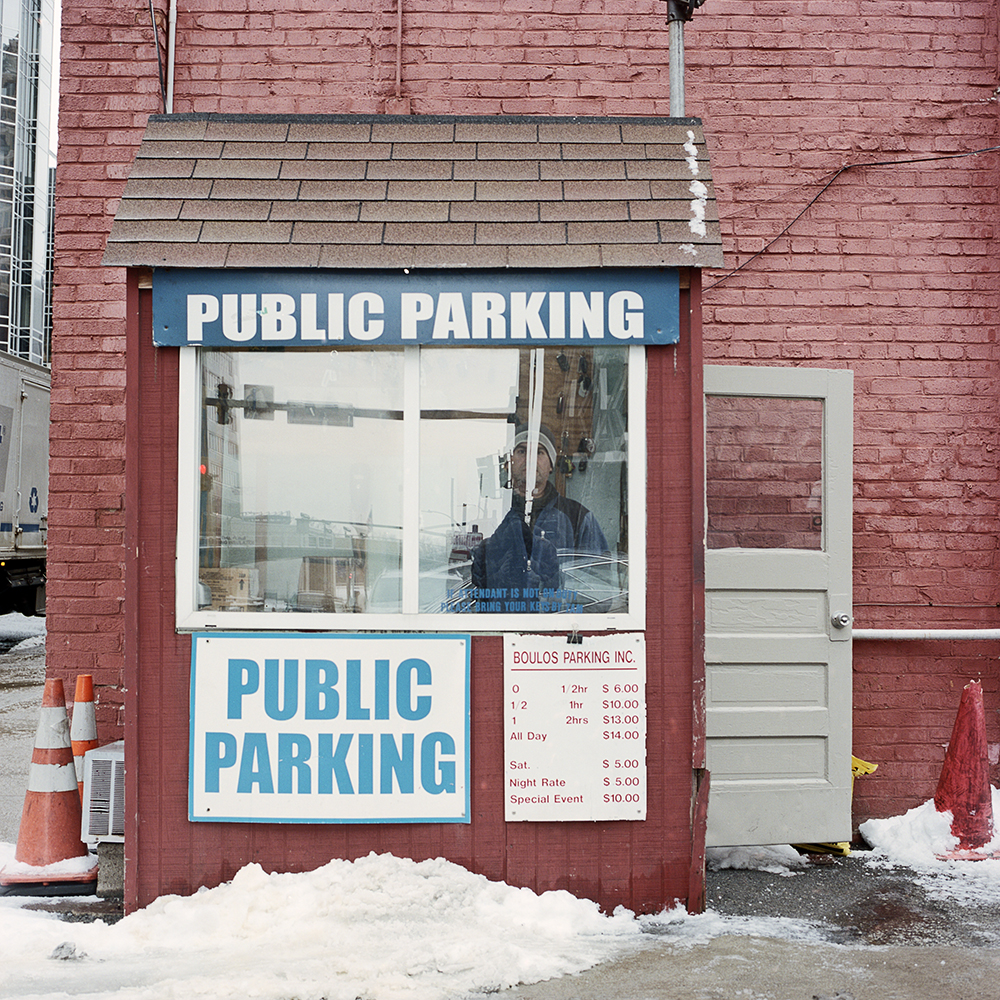 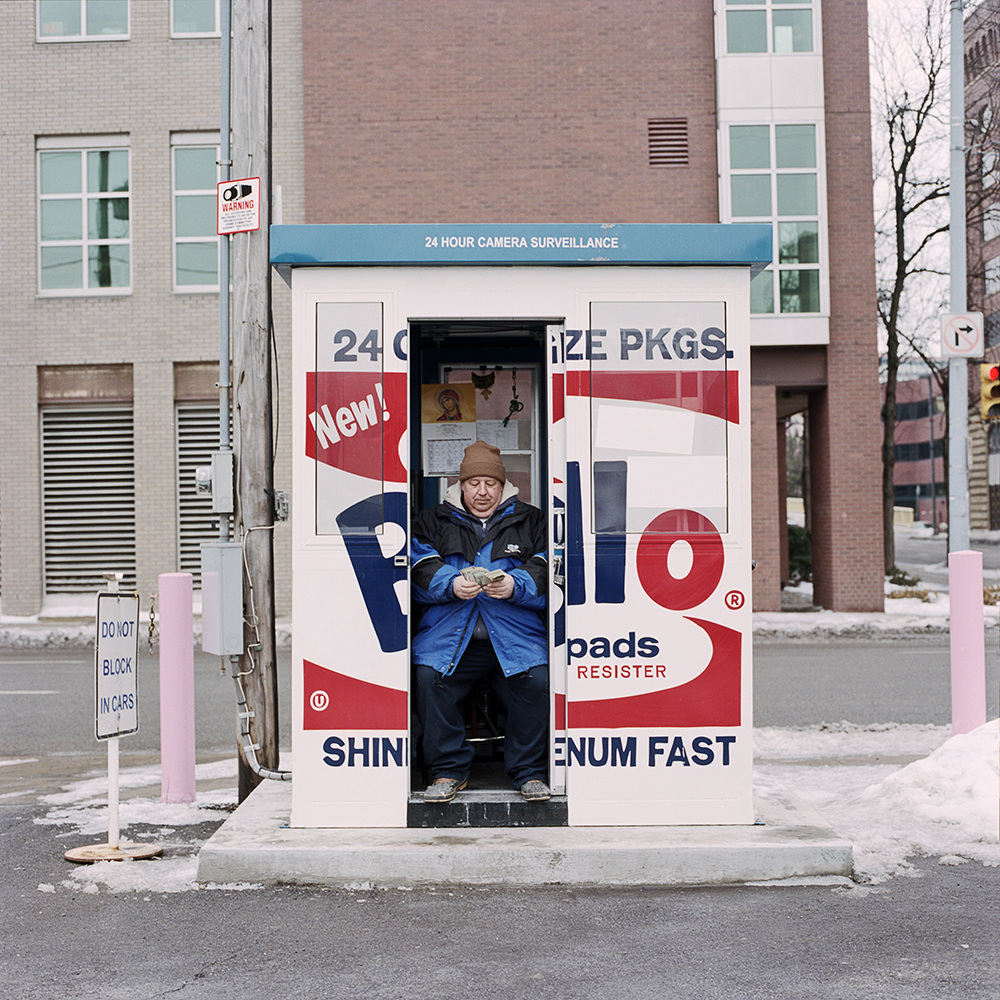 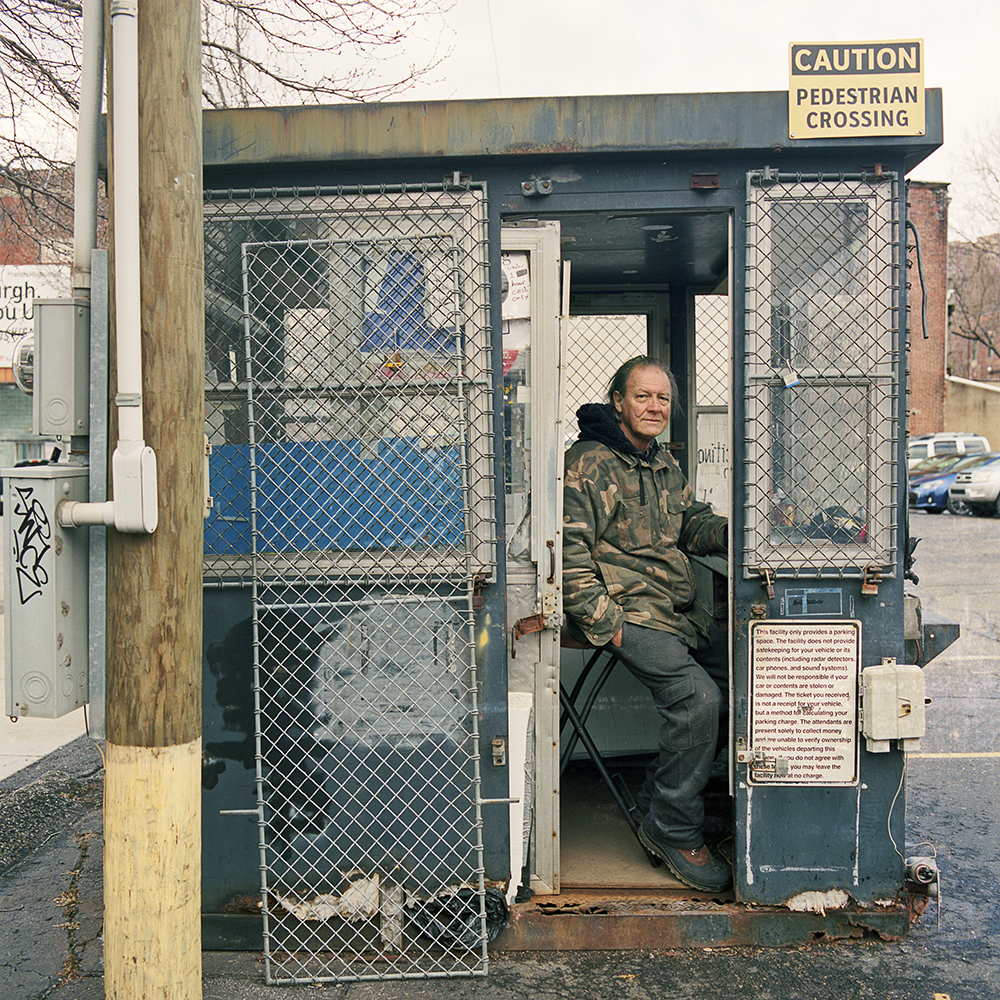 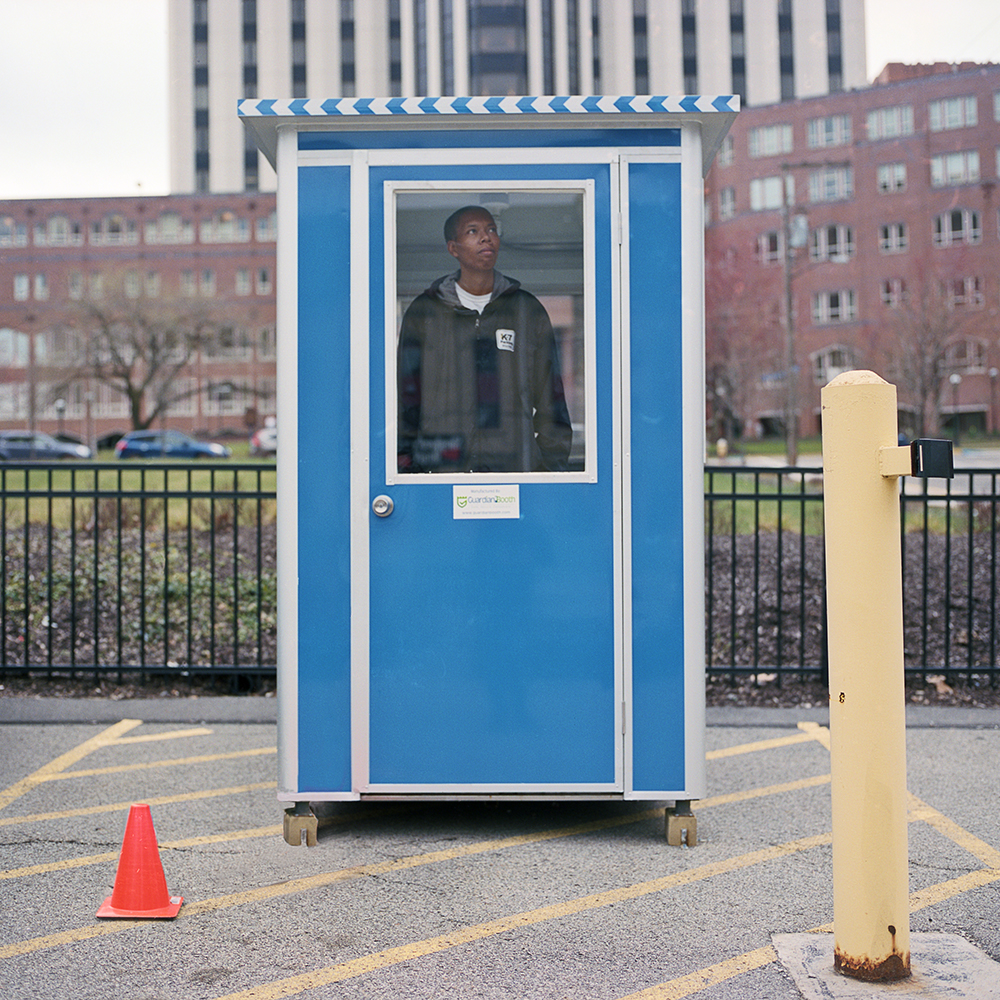 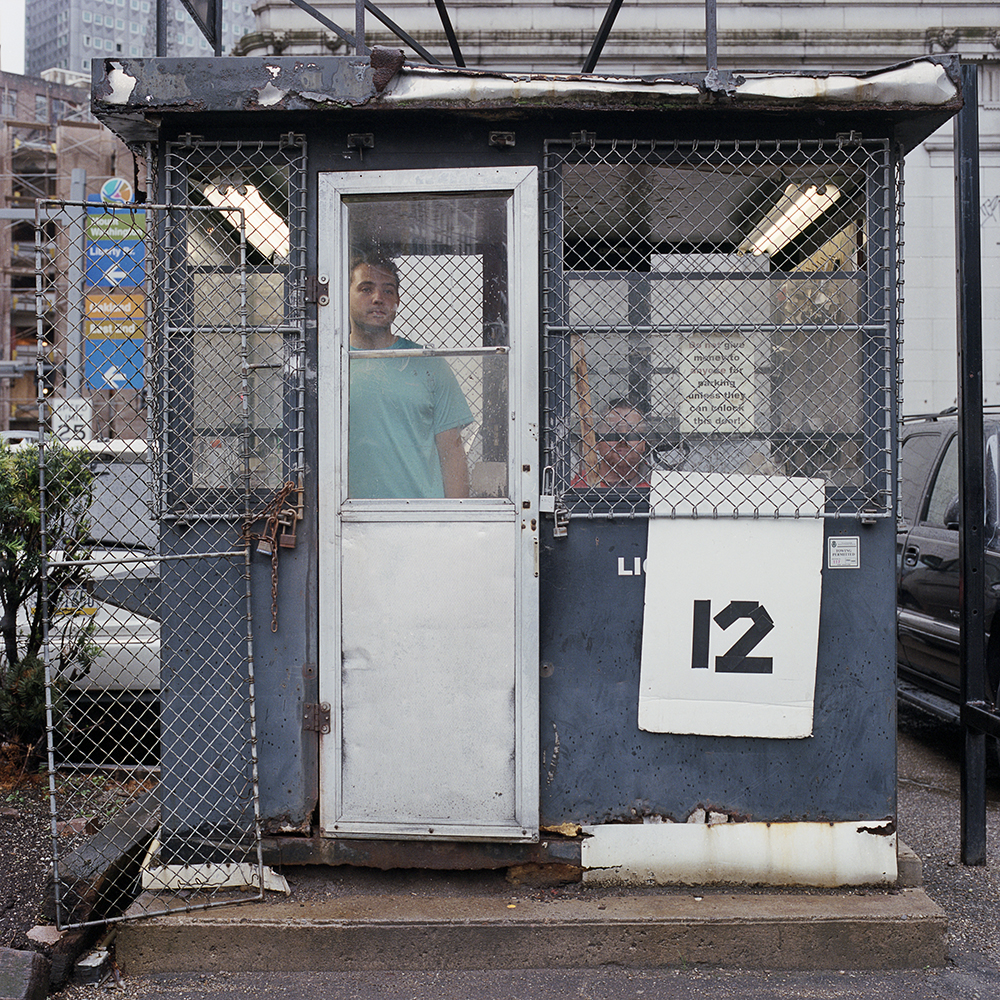 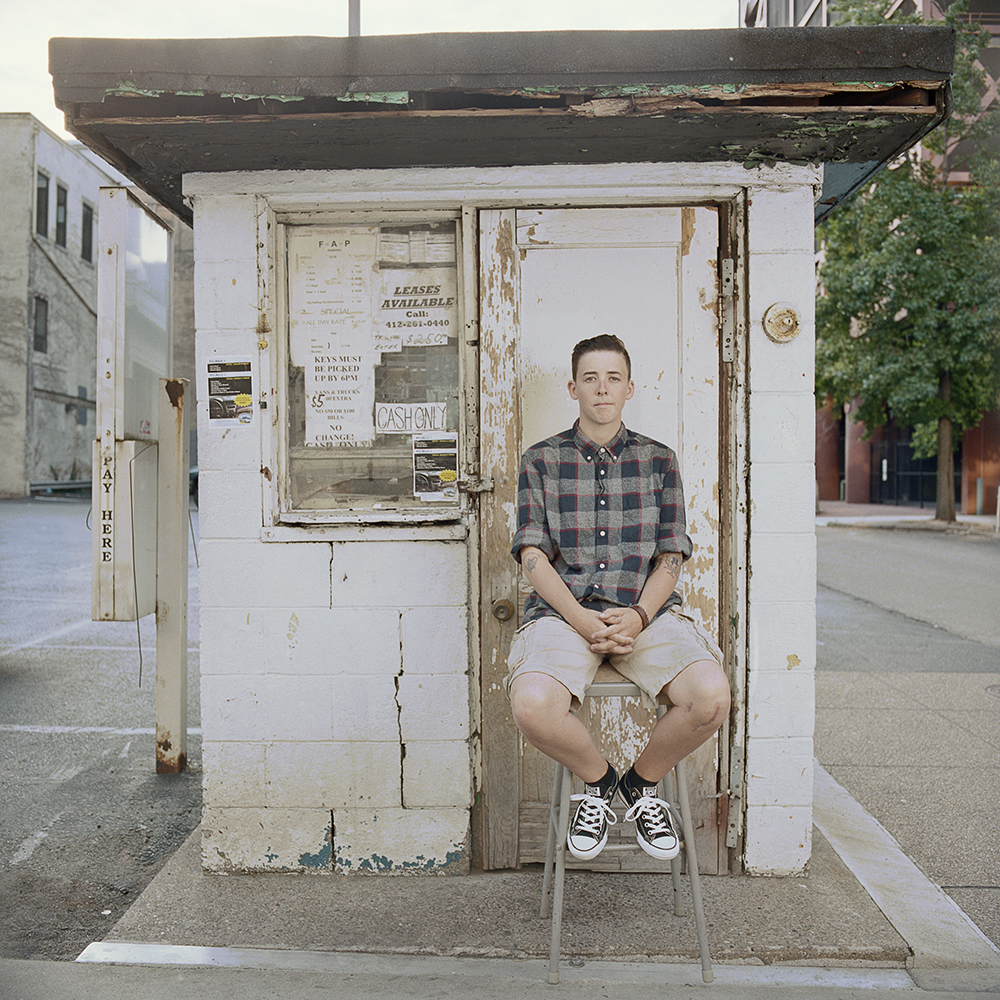 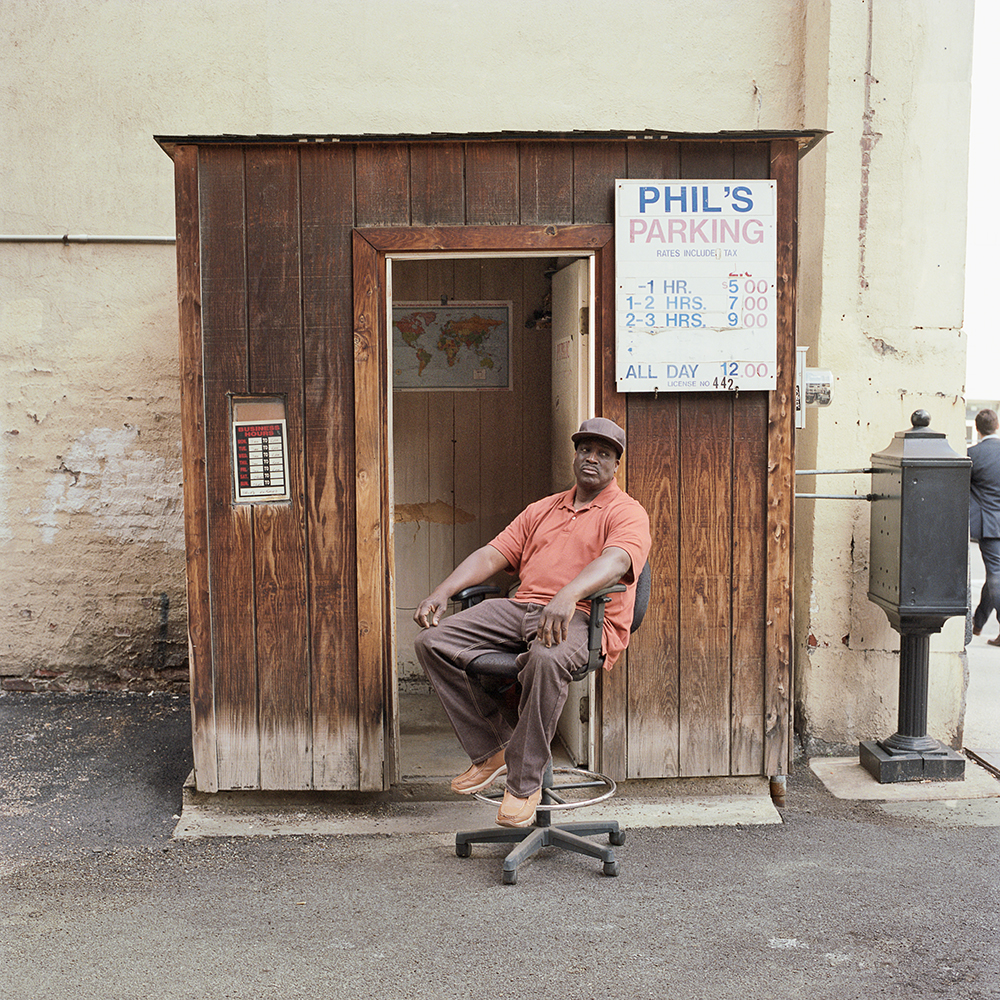 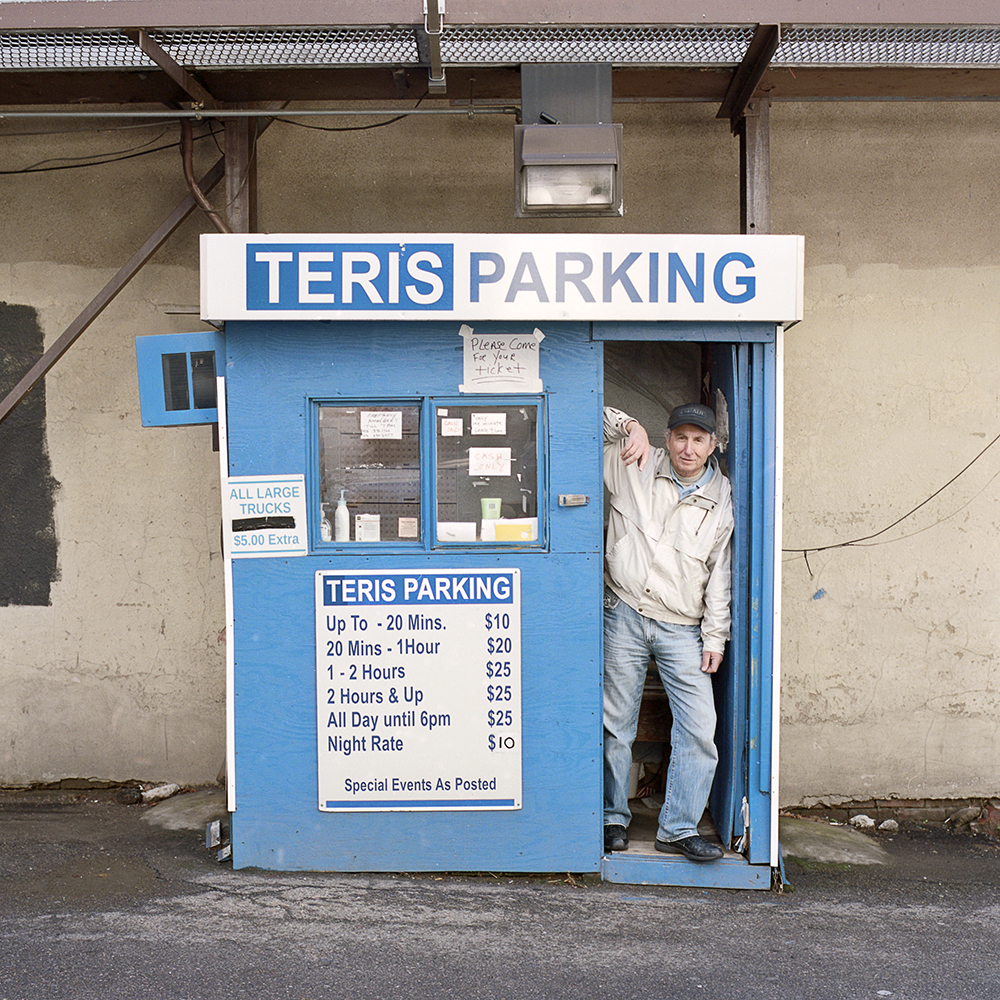 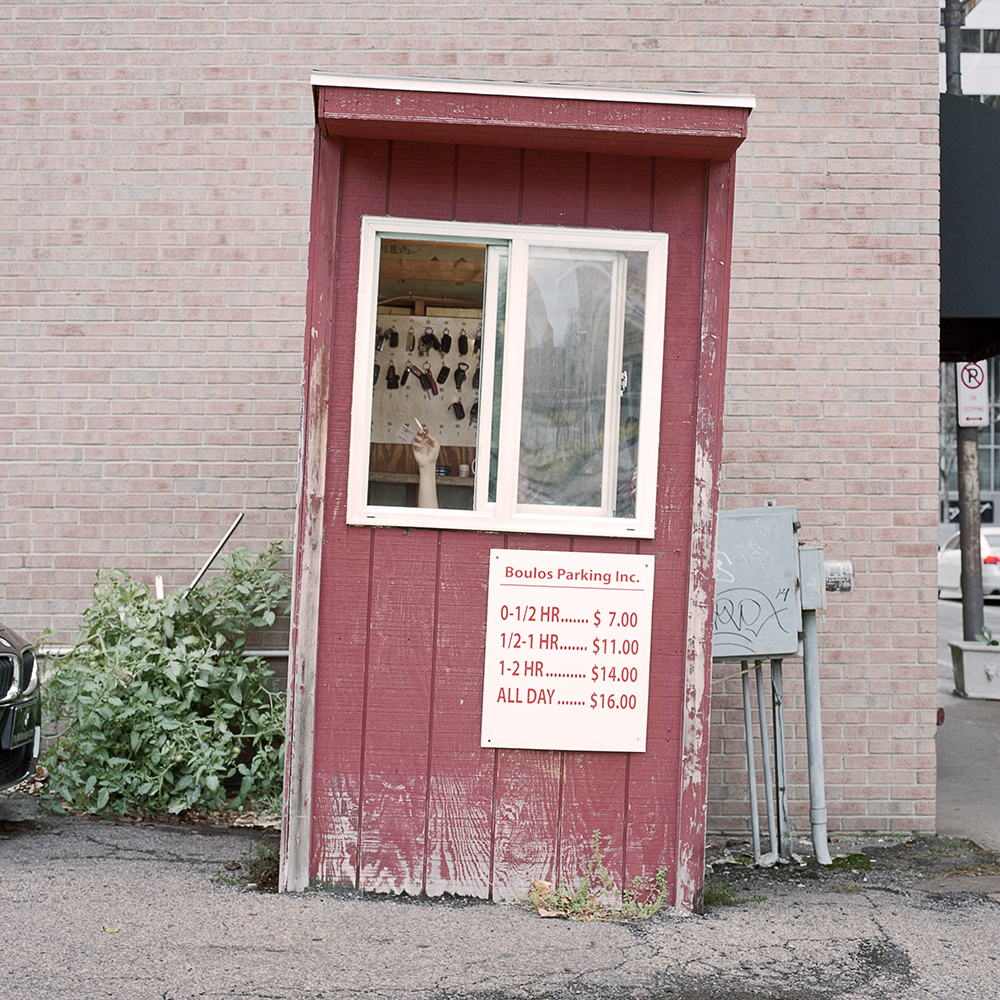 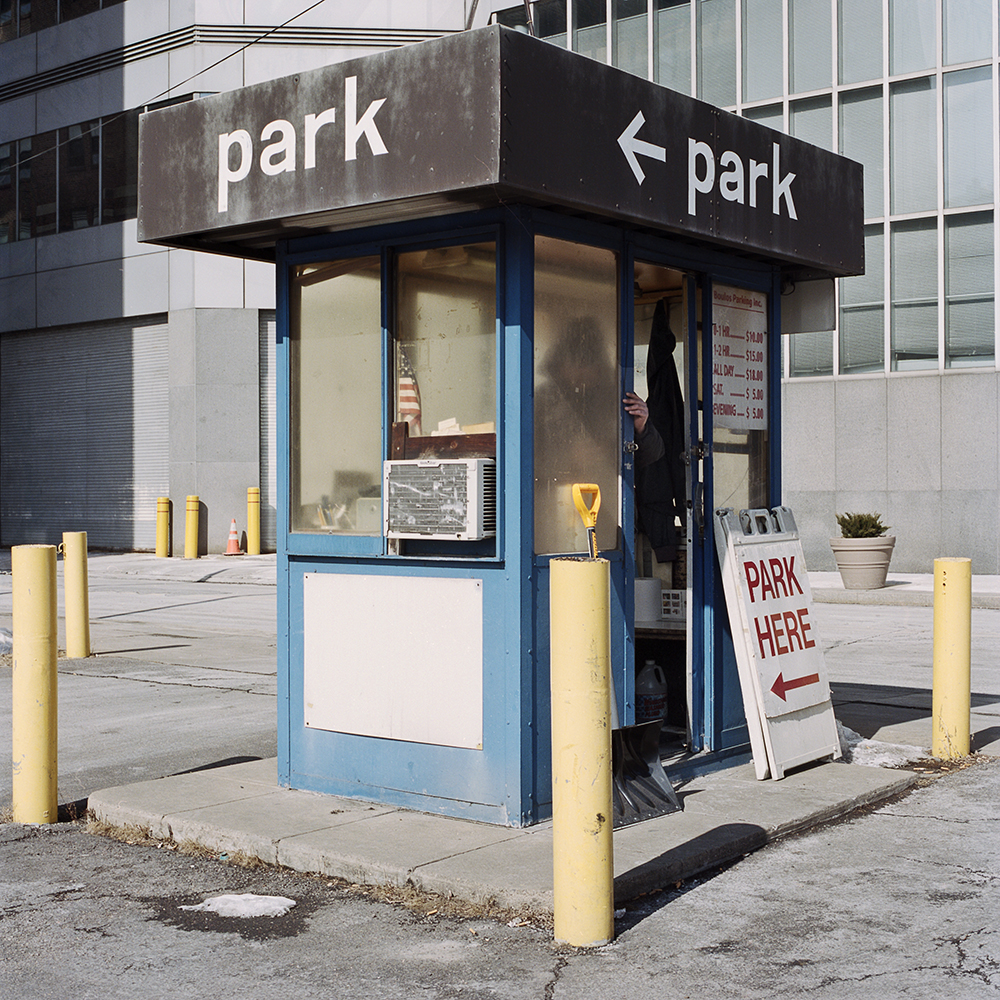 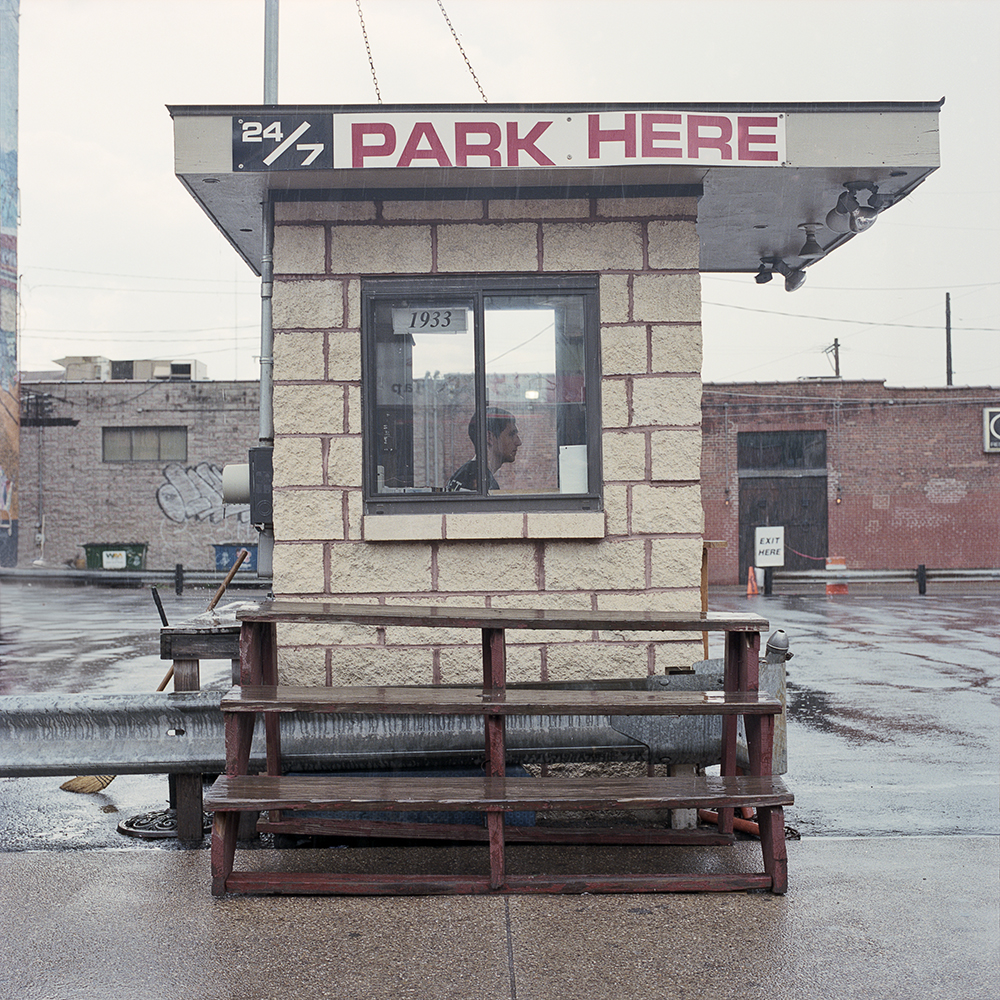 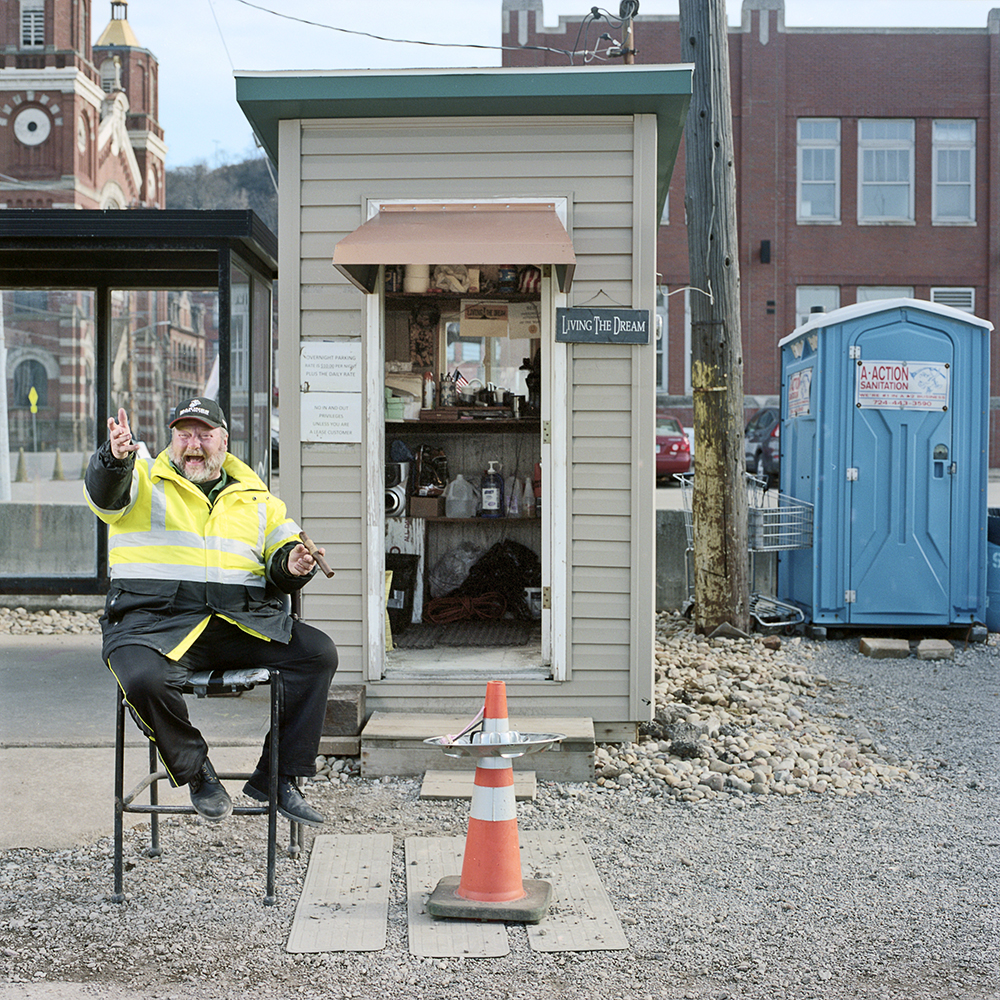 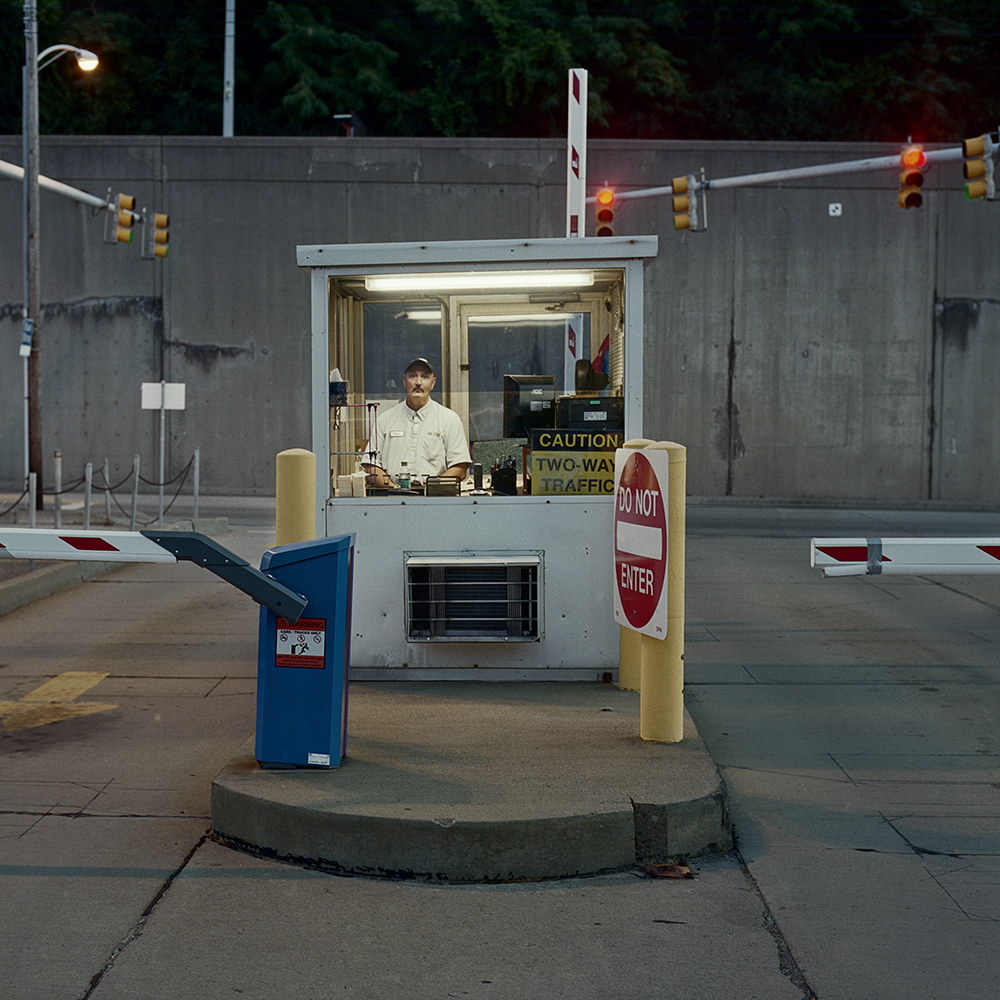 NEXT | Paul Kessel: The Last Stop: Portraits of Coney Island >
< Fresh: 15 Photographers at the Los Angeles Center of Photography | PREV