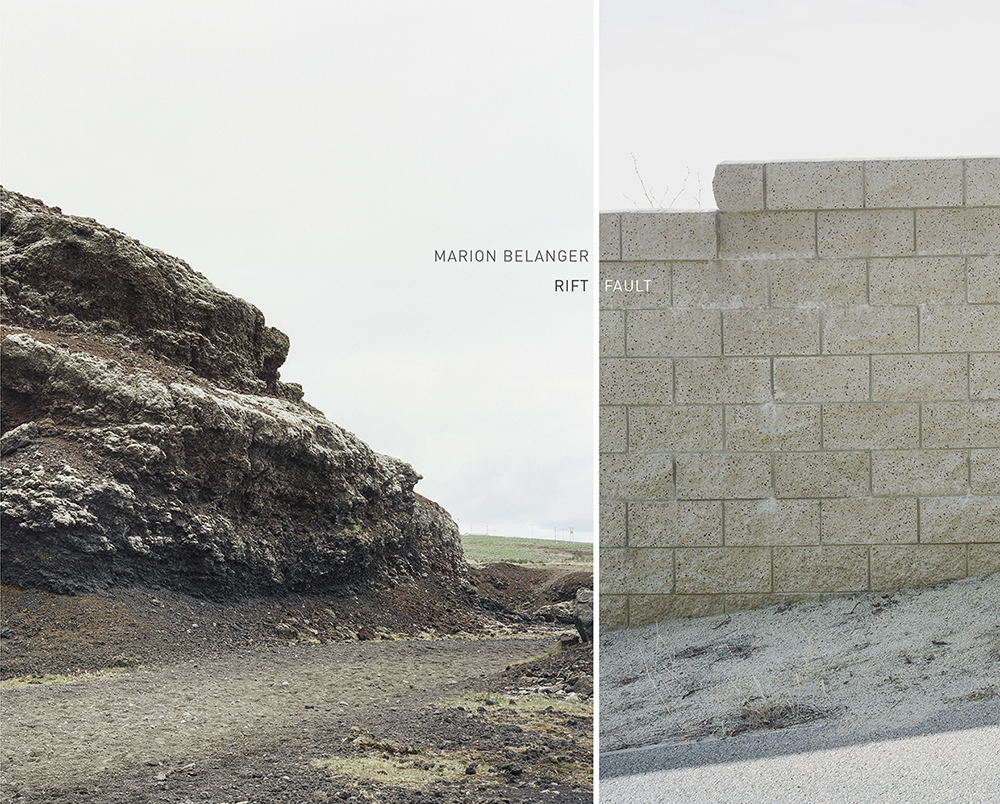 When I made the decision to move to California, my dearest friends and family (in addition to their sincere well wishes) provided me with many versions of the same grave warning- “You know, the big one is coming…”, followed by a chin-down, eyebrows-raised look of morbid insinuation. From my East Coast vantage point, the expectation of some potential geological catastrophe seemed like a silly reason to cancel my plans to move to the City of Angels. I wanted to walk down those gold-paved streets, damnit.

Los Angeles has been home for two years now, and my reckoning with the realities of the geological conditions upon which I reside is often clouded by pristine coastlines and 365 days a year of beach weather. But every now and then, while standing in line for coffee or walking around my neighborhood on some misty evening, a terrifying realization dawns on me; that it could happen right now. That this city I live in, a city founded on the ideal that humankind could overcome any geological or environmental hindrance in the name of civilization, is temporary. I haven’t really spoken with anyone about these moments of fear that leave a pit in my stomach but I am certain they are a familiar experience to many residents of Southern California. And yet, we all carry on, ignoring willfully or otherwise the molten earth churning beneath our lives. 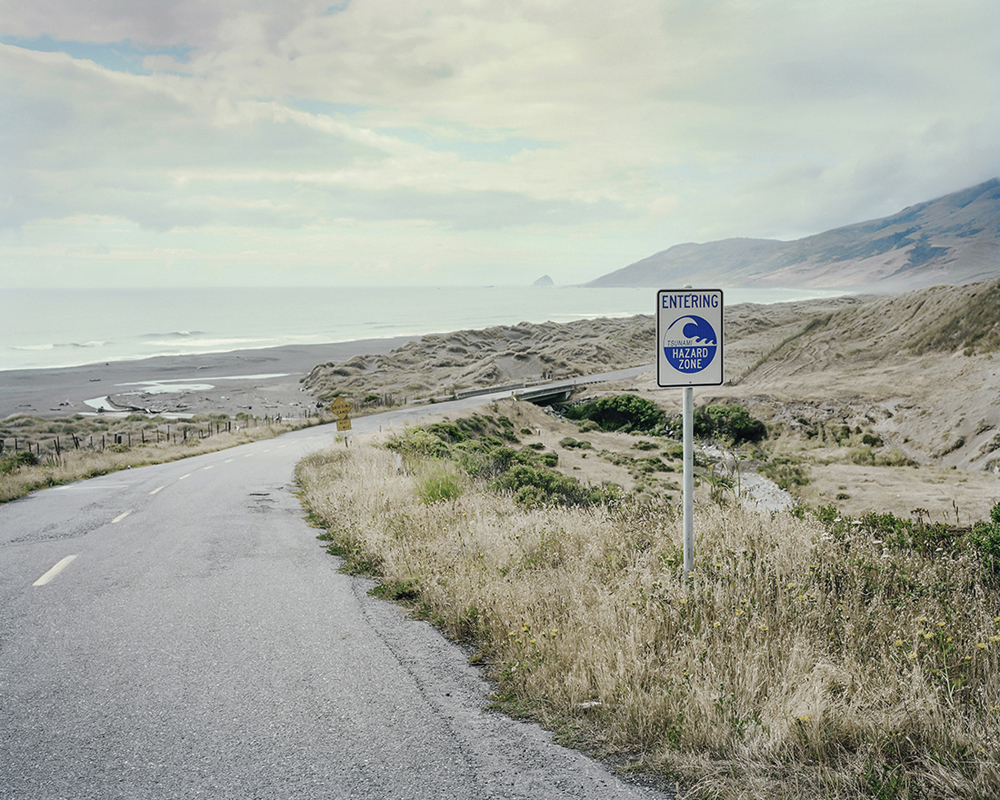 Fault 53 – Tsunami Sign, Cape Mendocino. This is where the San Andreas Fault finally leaves the land. Here the Pacific plate gives way to the Juan de Fuca plate, a remnant of the ancient Farallon plate that is moving against the North American continent and being forced beneath it – an area known to seismologists as the Cascadia Subduction Zone (CSZ). In 1992, a tsunami was generated by a magnitude 7.1 earthquake near Cape Mendocino. ©Marion Belanger 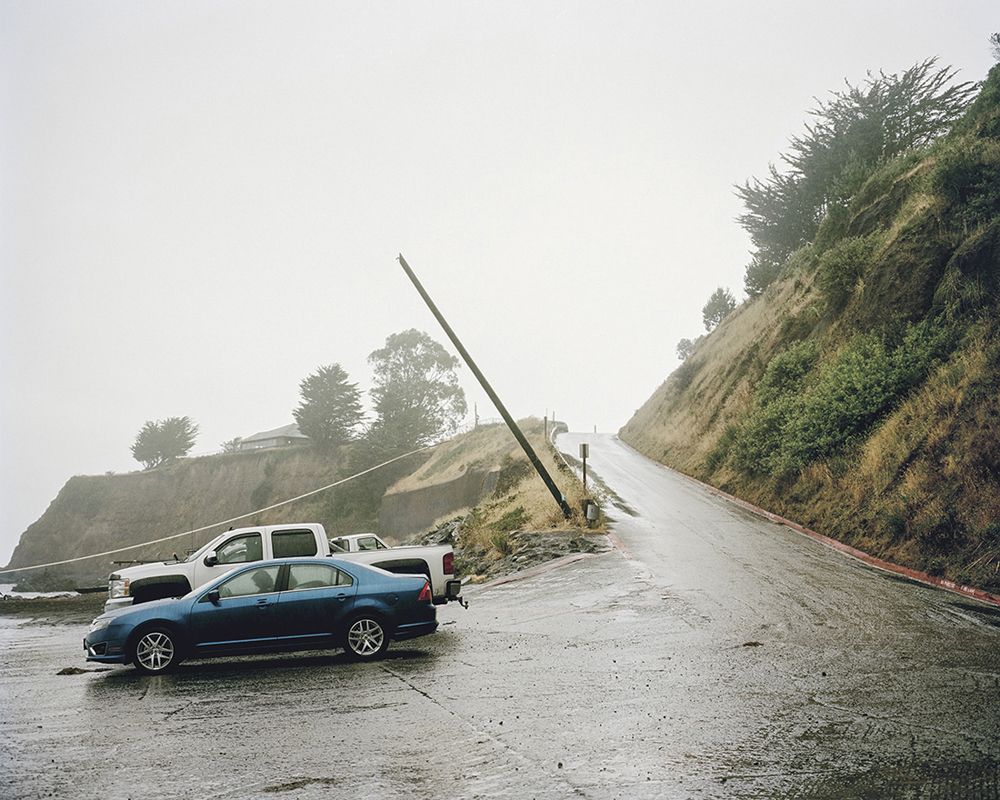 Fault 52 – Point Delgada. This is the end point of the San Andreas Fault proper. Thereafter the fault is splintered, and moves from sea to land until it finally departs land at Cape Mendocino. ©Marion Belanger

Marion Belanger has managed to encapsulate this complex psychological dichotomy in her newest book Rift | Fault, published by Radius. Her large format, color photographs are situated side by side, allowing the viewer to experience at once an image from the volcanic landscapes of Iceland where the Mid Atlantic Rift defines the eastern edge of the North American Continental Plate, and on the left an image from California where the Western edge of the North American Plate meets the Pacific Plate along the San Andreas Fault. It is at these interfaces that Belanger invites us to contemplate the visible versus the invisible, acknowledgement versus denial, and the disconnect from reality that allows for everyday life to carry on.

It is at once deeply unsettling and awe inducing to consider the volatile geological processes occurring beneath the misty, relatively peaceful scenes that Belanger lays before us. Her use of light and color blur distinctions of place so that an image from Daly City where the San Andreas Fault briefly departs land before returning to shore near Stinson Beach may converse freely with an image of steaming lava fields in Northern Iceland where the Apollo Crew trained for their impending moonwalks. It is within this visual tension between images, liberated from context of place, that Belanger’s audience is allowed to reflect on broader, more complex issues of climate change, human resilience (or perhaps, ignorance), and the scale of our place within the environmental infrastructure that governs life on this planet.

If you’re on the East Coast there are a number of opportunities to witness Rift|Fault in person. on January 18- March 2nd there will be an exhibition featuring the work of Marion Belanger, Debbie Hesse and Martha Lewis titled Winter Asterism at the Theater Works Hartford in Hardford, CT. Radius books will also be exhibiting at AIPAD, NYC from April 5-8, including a book signing by Belanger. There will also be an exhibition including Belanger’s work at the Beinecke Rare Book and Manuscript Library at Yale University opening September 21st entitled, Eye On The West. 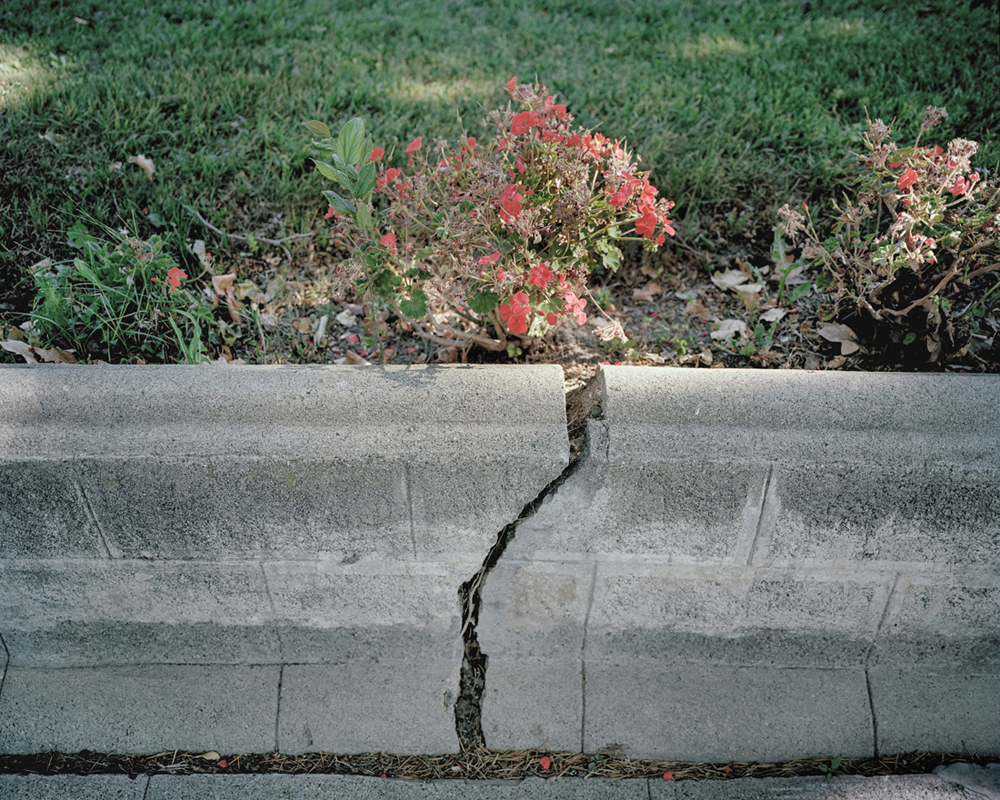 Fault 43 – A cracked retaining wall due to tectonic movement, Hollister. The Calaveras Fault is slowly splitting the city in half, at a rate of half an inch per year. Hollister is well known among geologists because it portrays one of the best examples of aseismic creep in the world. ©Marion Belanger 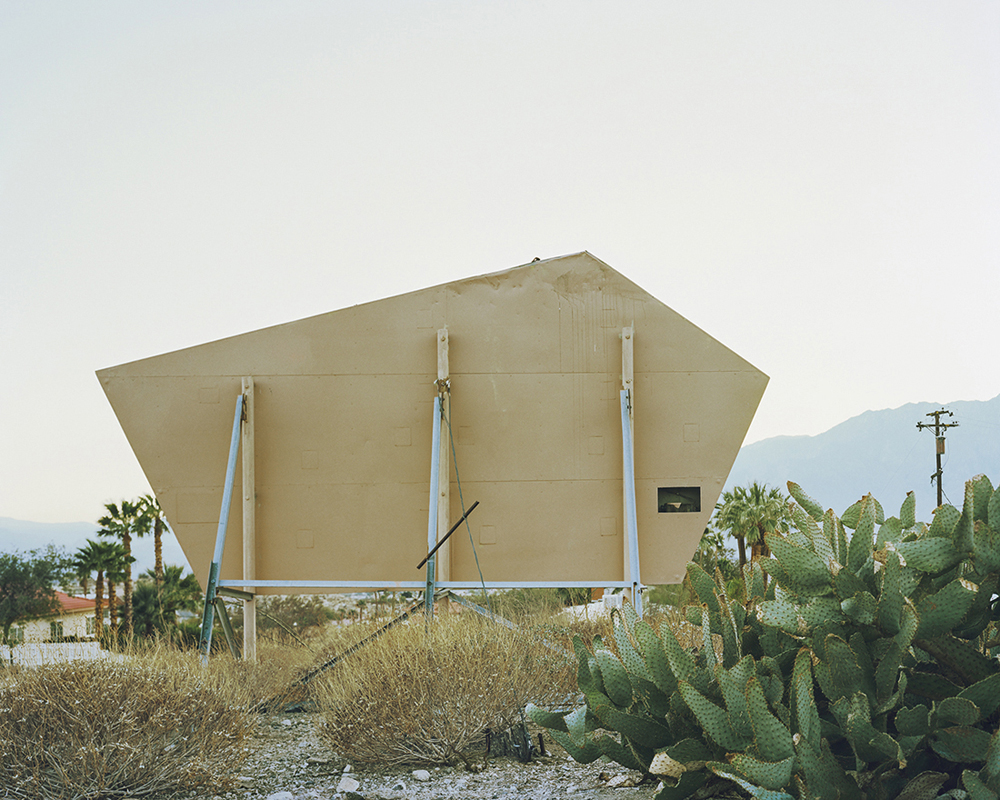 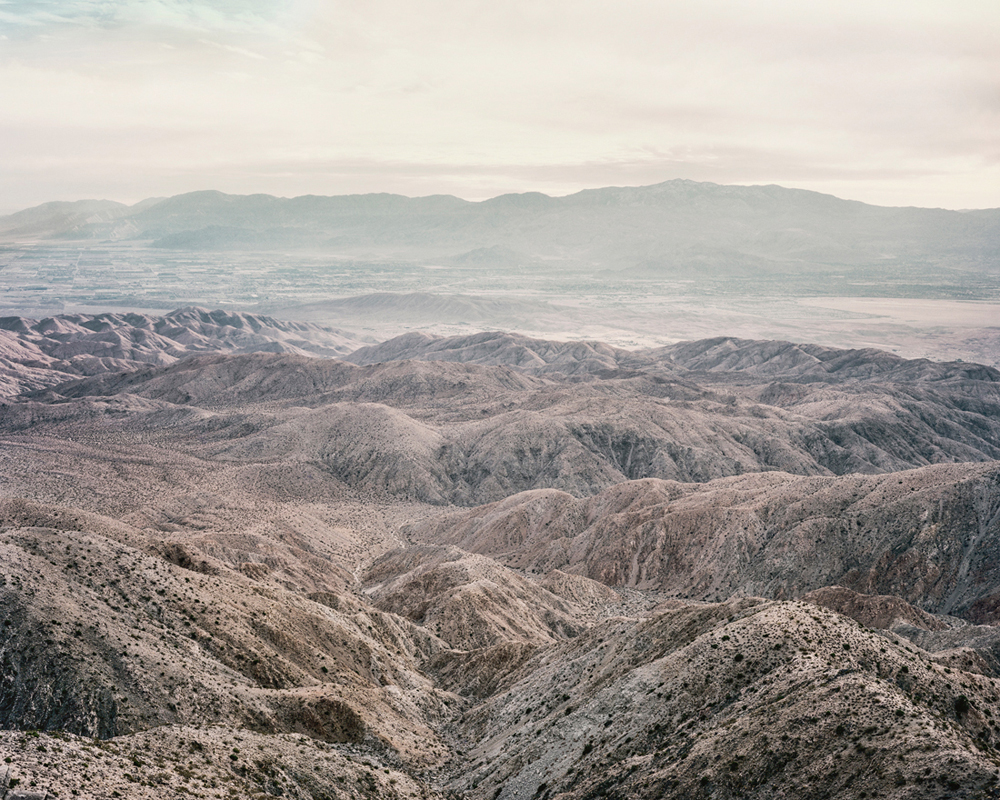 Fault 30 – Coachella Valley as seen from Joshua Tree National Park. The Coachella Valley is a desert valley in Southern California that extends for approximately 45 miles near the San Bernardino Mountains to the northern shore of the Salton Sea. The fault runs through this Valley. ©Marion Belanger

Marion Belanger (USA) photographs the cultural landscape, particularly where geology and the built environment intersect. She is a current honoree for the 2017 Shpilman International Prize for Excellence in Photography from the Israeli Museum of Art and the author of Rift/ Fault, with an essay by Lucy Lippard (Radius Books, 2016) and Everglades: Outside and Within, with an essay by Susan Orlean (Center for American Places at Columbia College Chicago, 2009). Belanger was awarded a John Simon Guggenheim Fellowship to photograph the contested landscape of the Florida Everglades in 2002.  She earned a M.F.A. from the Yale University School of Art where she was the recipient of both the John Ferguson Weir Award and the Schickle-Collingwood Prize, and a B.F.A. from the College of Art & Design at Alfred University. She has been an artist in residence at the MacDowell Colony, Everglades National Park, and MASS MoCA, among others.  Her photographs are shown internationally, and her work is held in many collections including the National Gallery for Art, the New Orleans Museum of Art, and the Yale University Art Gallery and the Beinecke Rare Book and Manuscript Library. Some exhibitions include Photography and America’s National Parks, George Eastman Museum, Rochester, NY; Internationale Fototage: Contemporary American Photography, Mannheim, Germany; Northern (L) Attitudes: Norwegian and American Contemporary Art, The American-Scandinavian Foundation, New York, NY. The artist resides in Guilford, Connecticut where she teaches at the Hartford Art School, and the Graduate Liberal Studies Program at Wesleyan University. 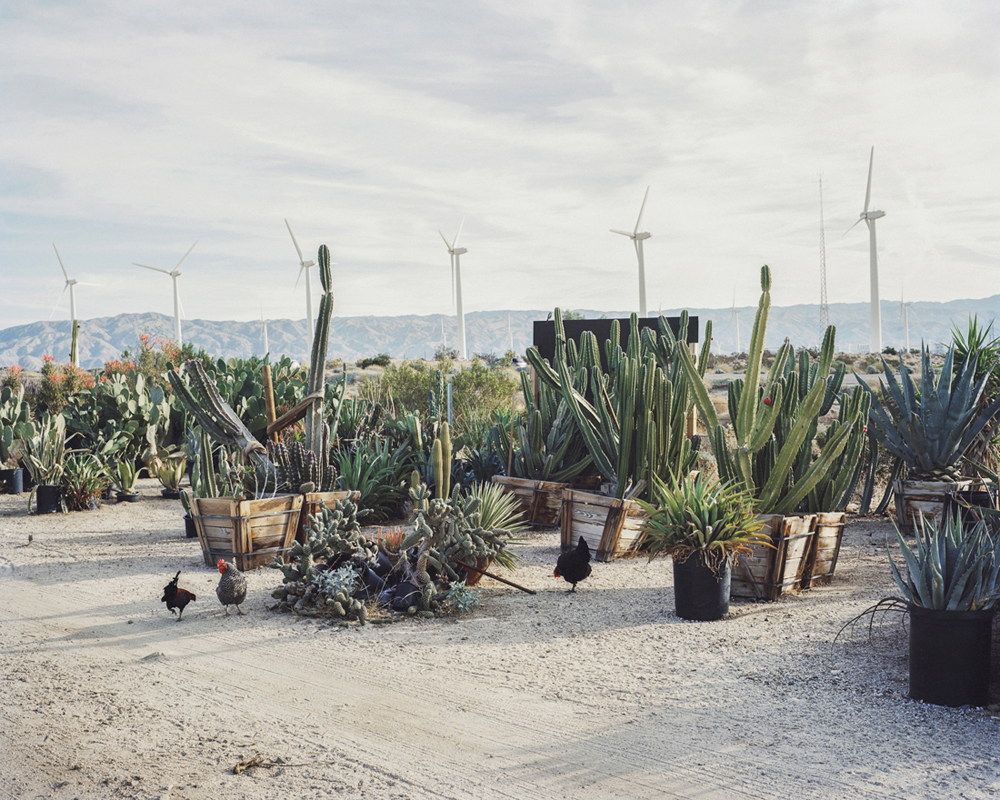 Fault 28 – Cactus Farm, near Desert Hot Springs. Seen in the background is the San Gorgonio Pass Wind Farm, the oldest of three wind farms in California. There are 4,000 wind turbines in a 70-square-mile area that provides enough electricity to power Palm Springs and the entire Coachella Valley. The wind farm is located on the eastern slope of the San Gorgonio Pass in Riverside County. This desert region has an annual rainfall amount of less than 5 inches, and with the ongoing drought in California municipalities are encouraging residents to replace green lawns and flowering annuals with indigenous desert plantings. ©Marion Belanger 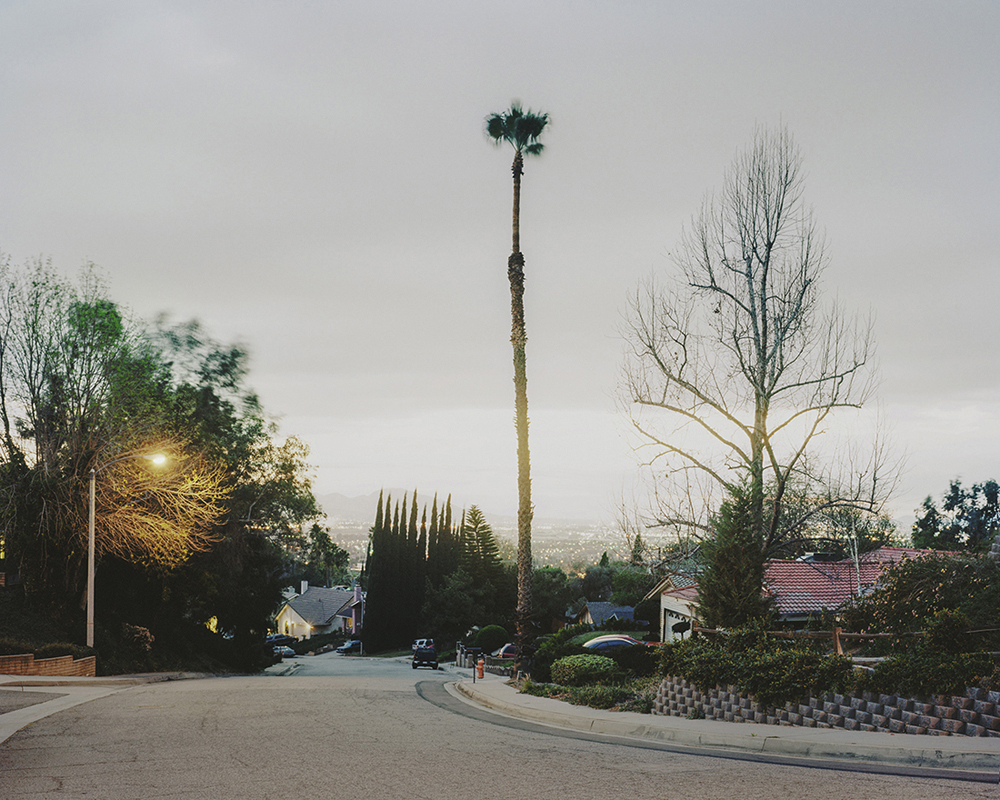 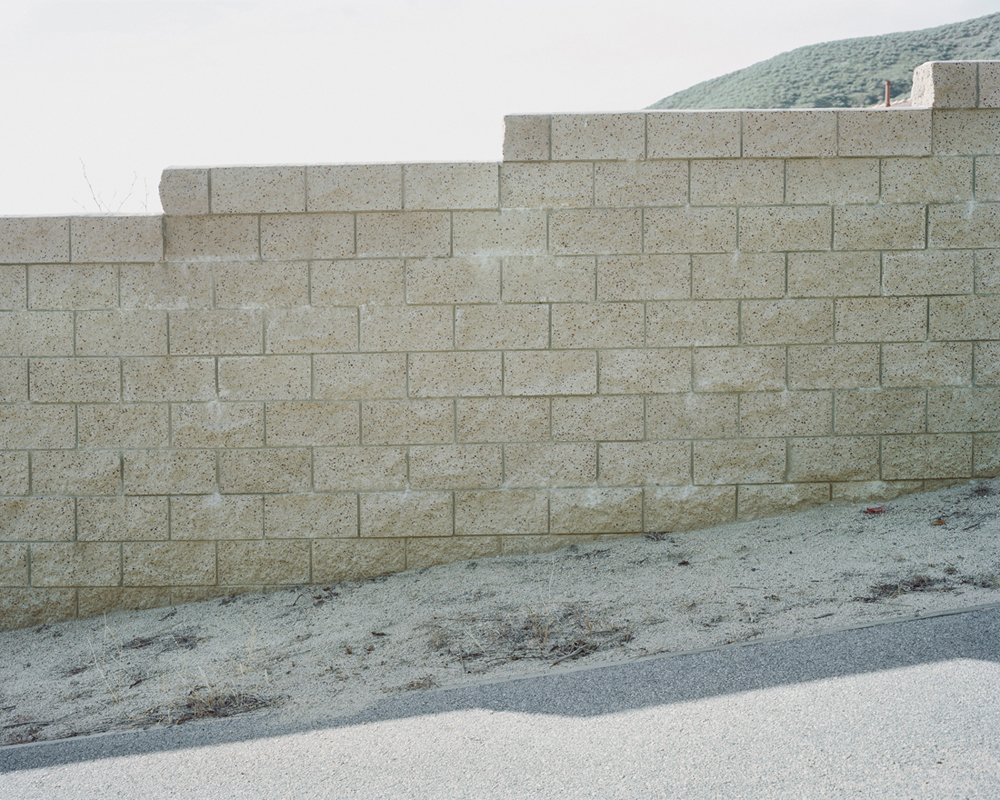 Fault 15 – Concrete Wall, San Bernardino. San Bernardino is in a high-risk earthquake zone. Recent scientific evidence suggests that a large earthquake along the southern San Andreas Fault is overdue. Most at risk is the 100-mile segment that cuts through Palm Springs, San Bernardino and Riverside. ©Marion Belanger 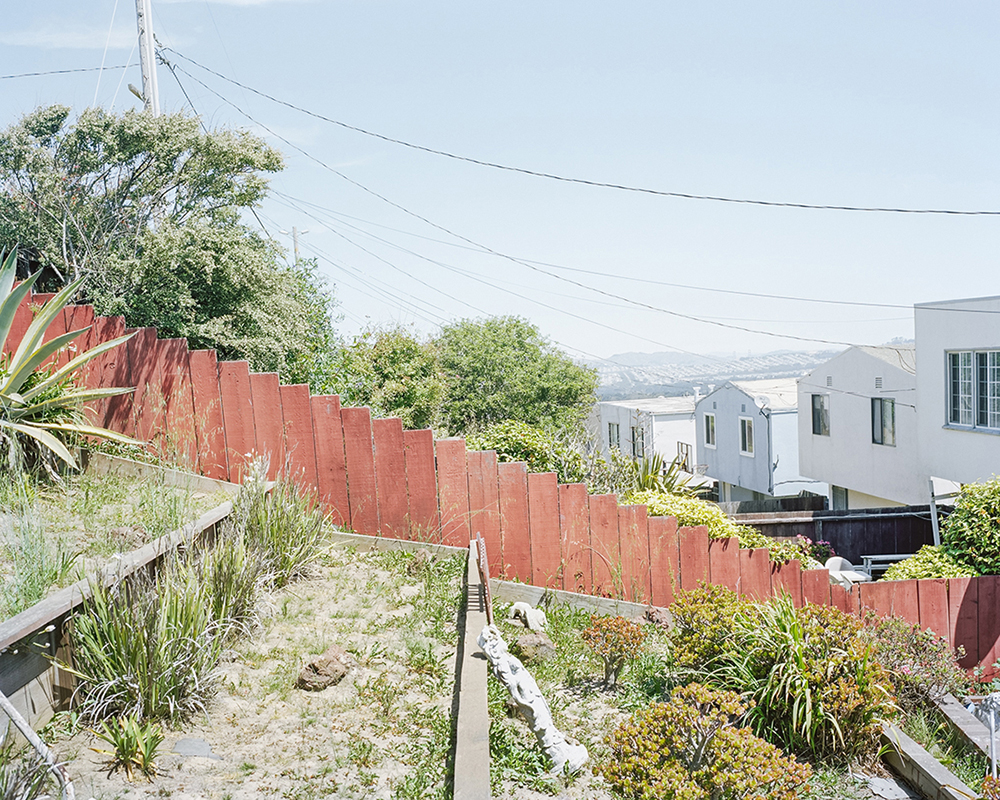 Fault 10 – Backyard, Daly City. Daly City, located along a cliff overlooking the Pacific, is just south of San Francisco. The city is the largest the within San Mateo County. The San Andreas runs along the base of the cliff and is an active landslide that takes down homes, dirt, and rock. The San Andreas Fault departs land here before returning onshore near Stinson Beach in Marin County. ©Marion Belanger 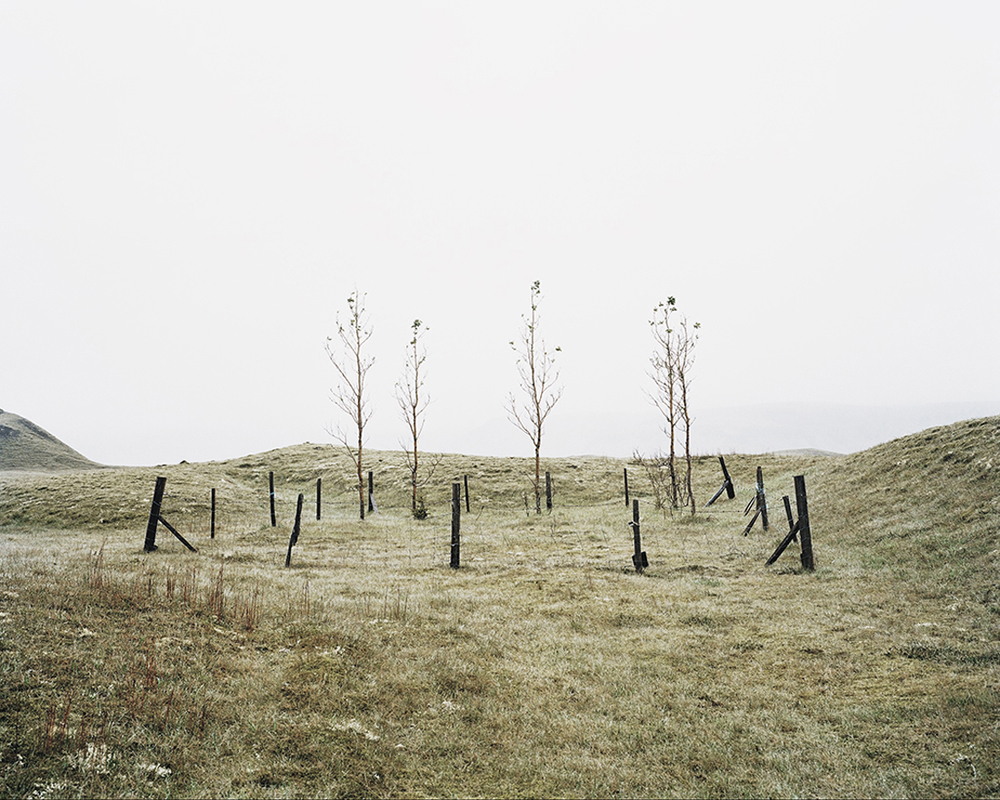 Rift 22 – Young trees, growing in the Landbrotshólar pseudocrator field. Pseudocraters form when lava flows into rivers or wetlands. When the very hot lava comes in contact with water, heavy explosions occur as from the boiling water and hot steam. Originally birch trees covered 40% of Iceland, but after the Vikings settled during the 9th century the island was completely deforested. Trees are now thriving due to climate change warming. As a result, biodiversity has increased and soil erosion has slowed. ©Marion Belanger 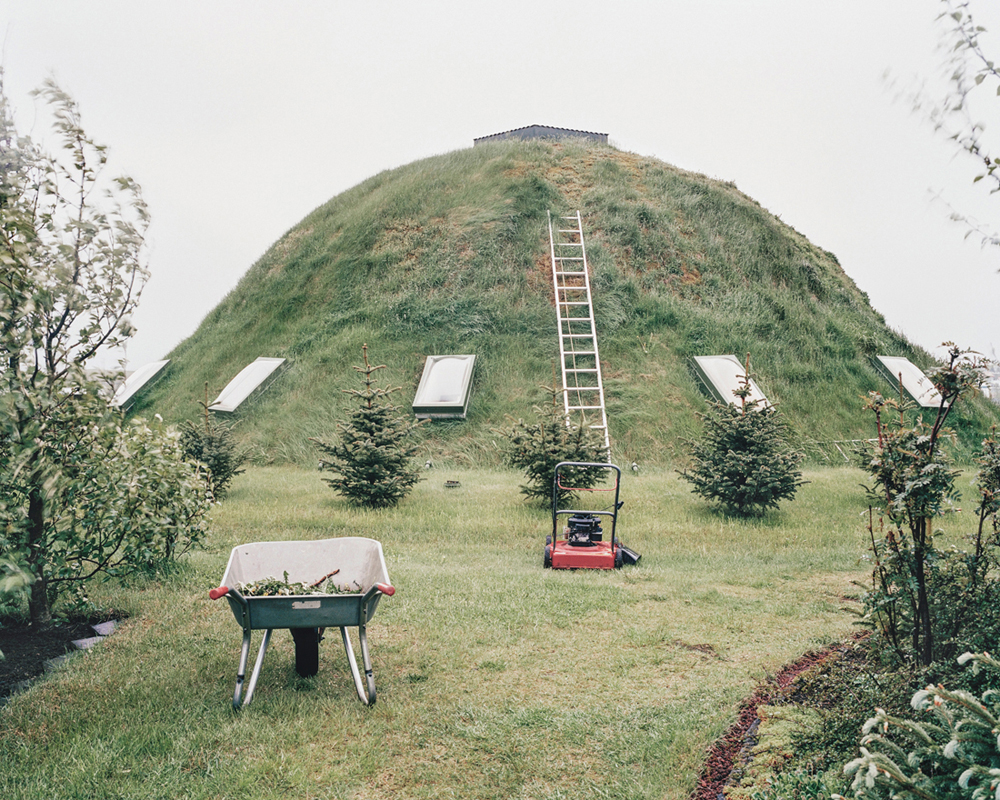 Rift 21 – A Turf covered geodesic dome near Hella. In Iceland there is a long tradition of turf-covered dwellings. This was due to the severity of the weather, and the superior insulation qualities of turf, as well as the scarcity of wood on the Island. ©Marion Belanger 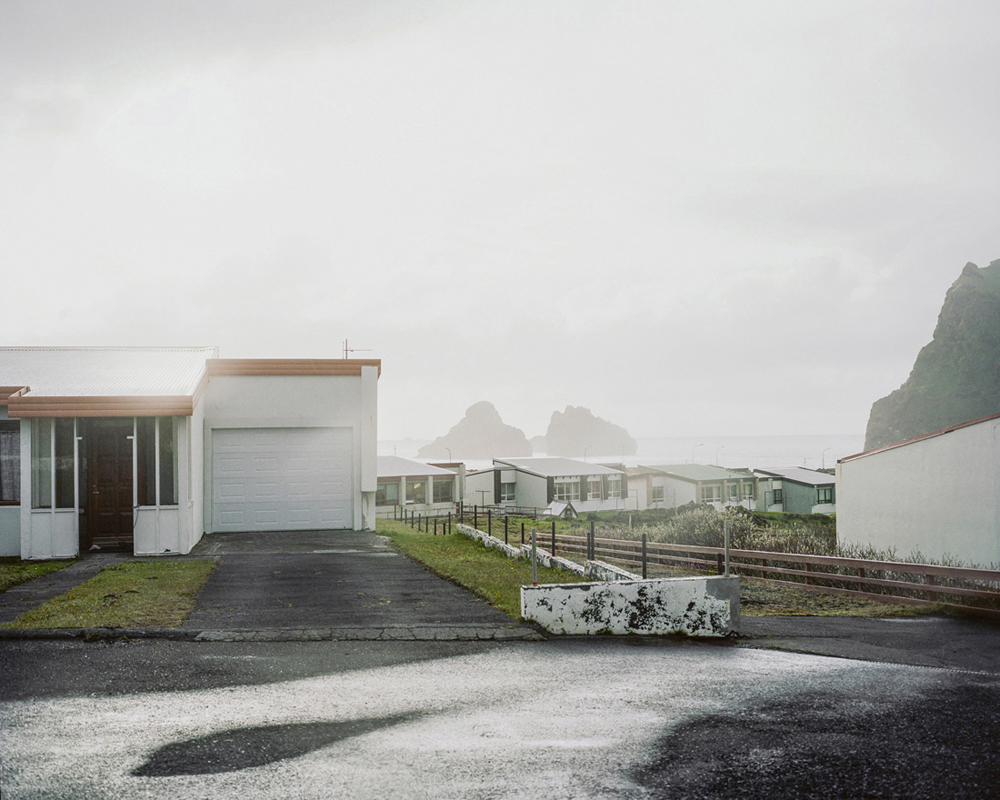 Rift 42 – A neighborhood in the town of Heimaey in the Vestmannaeyjar archipelago. It is the largest and most populated island off the Icelandic coast, and the country’s most important fishing port. The eruption of Eldfell in 1973 buried about 70 homes and farms under tephra and 300 buildings were burned by fires or buried under lava flows. ©Marion Belanger 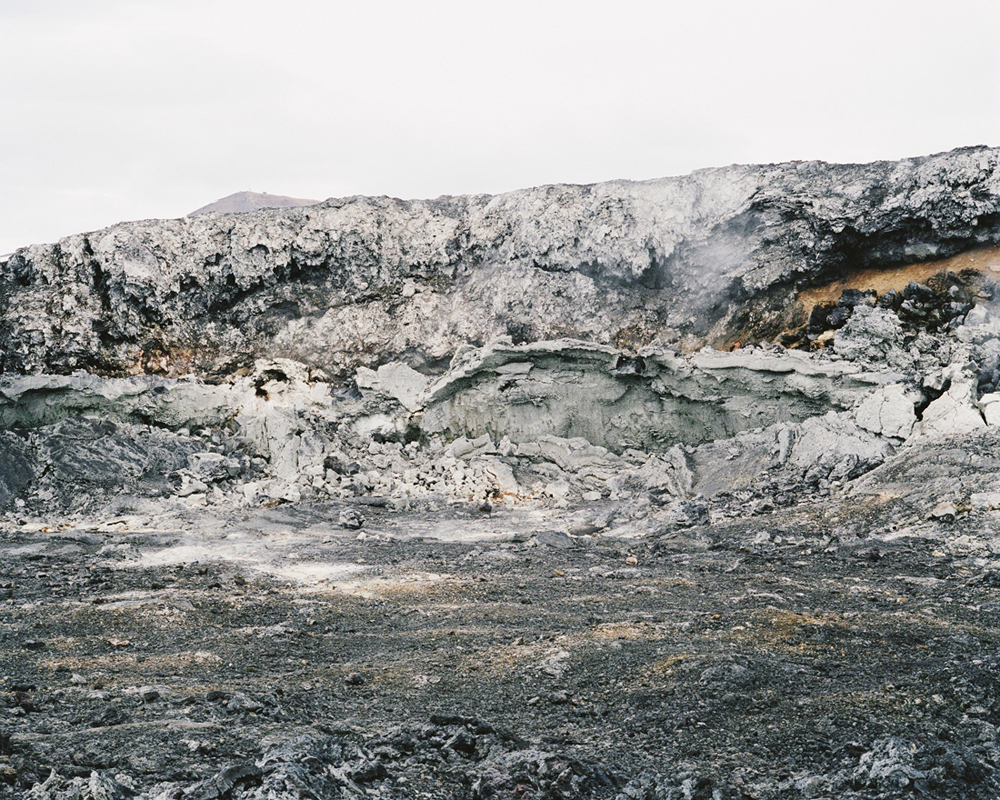 Rift 8 – Hot Lava. The Leirhnjukur area is a central volcano with steaming hot lava fields in the area of Mývatn and close to Reykjahlíð in the northern central region of Iceland. The Apollo 11 crew trained in the barren, steaming landscape here for their impending moonwalks. ©Marion Belanger 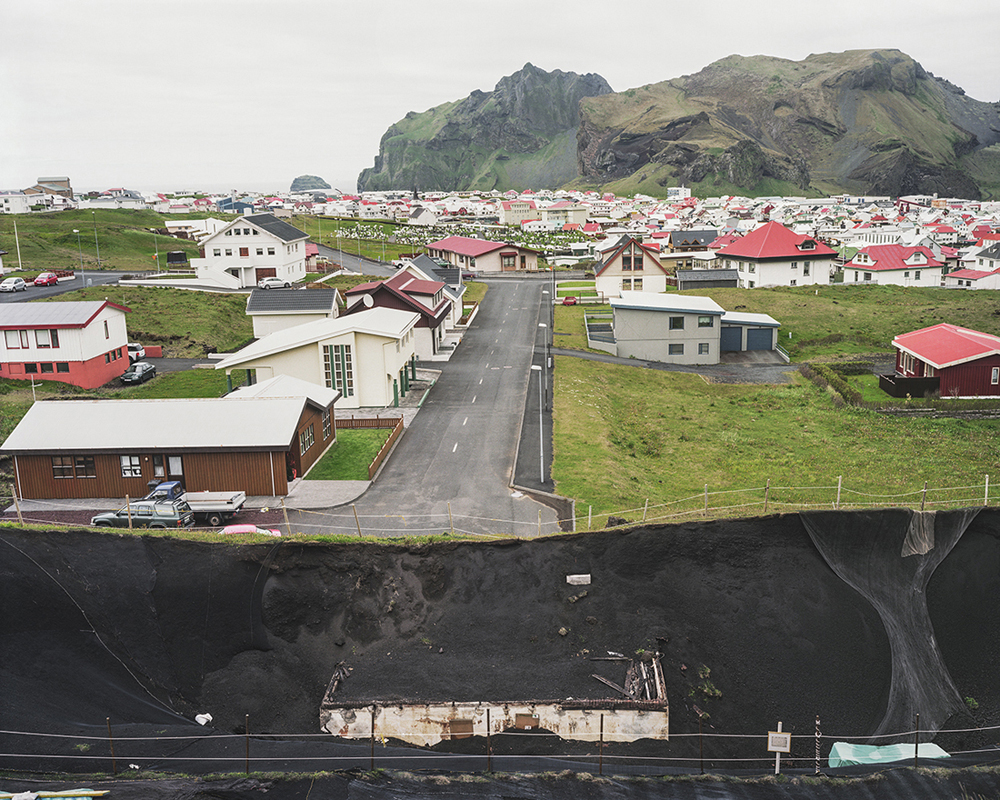 Rift 26 – A volcanic excavation site, Heimaey. On January 23, 1973 the volcano Eldfell erupted without warning on the important fishing island of Heimaey. Volcanic ash destroyed over 400 homes, and the island grew one third larger. The harbor was saved from destruction by the constant spraying of cold seawater over the hot lava. Heimaey is located in the Vestmannaeyjar archipelago. It is the largest and most populated island off the Icelandic coast. ©Marion Belanger 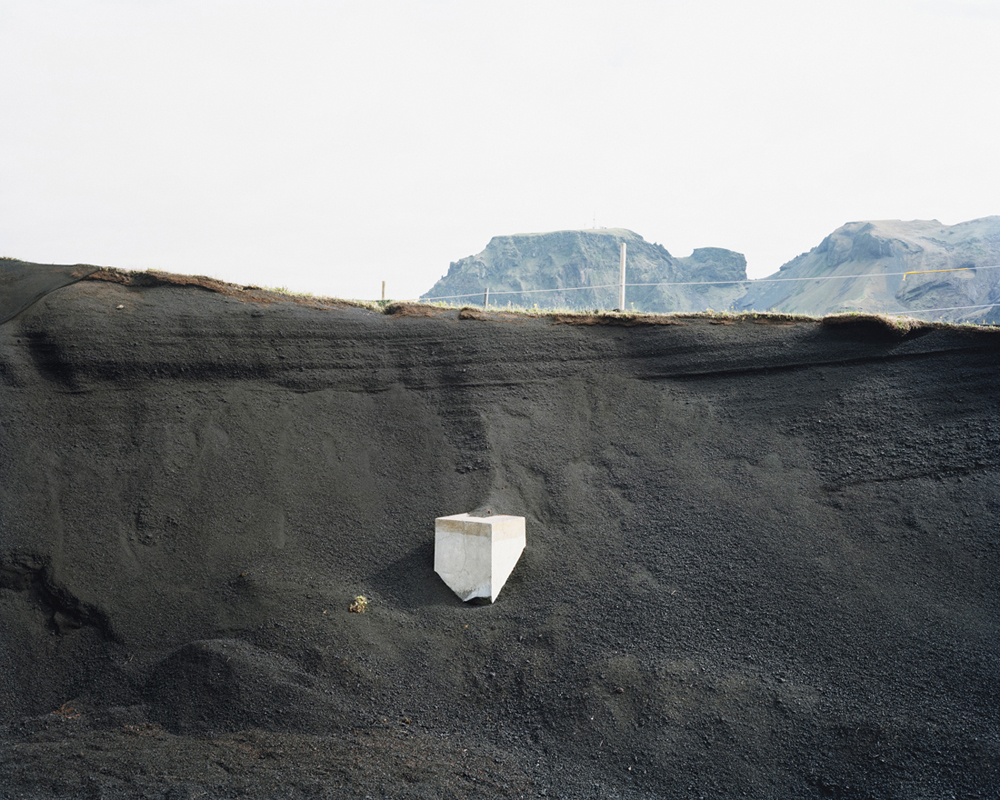 Rift 25 – A volcanic excavation site, Heimaey. On January 23, 1973 the volcano Eldfell erupted without warning on the fishing island of Heimaey. Volcanic ash destroyed over 400 homes, and the island grew one third larger. The harbor was saved from destruction by the constant spraying of cold seawater over the hot lava. Heimaey is located in the Vestmannaeyjar archipelago. It is the largest and most populated island off the Icelandic coast. As the lava was very slow moving, residents were all evacuated without harm, except for one casualty. ©Marion Belanger 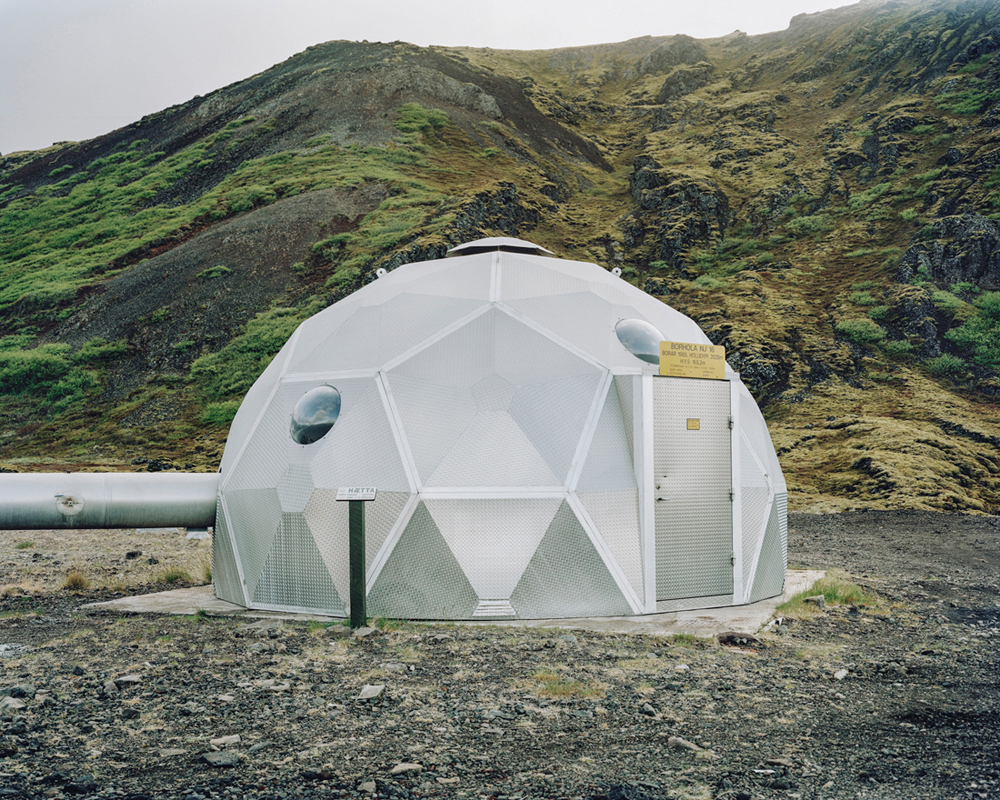 Rift 23 – Geothermal borehole structure at the Nesjavellir Power Station. Nesjavellir is the second largest geothermal plant in Iceland. It produces municipal hot water and electricity to roughly 85% of all houses in Iceland. ©Marion Belanger 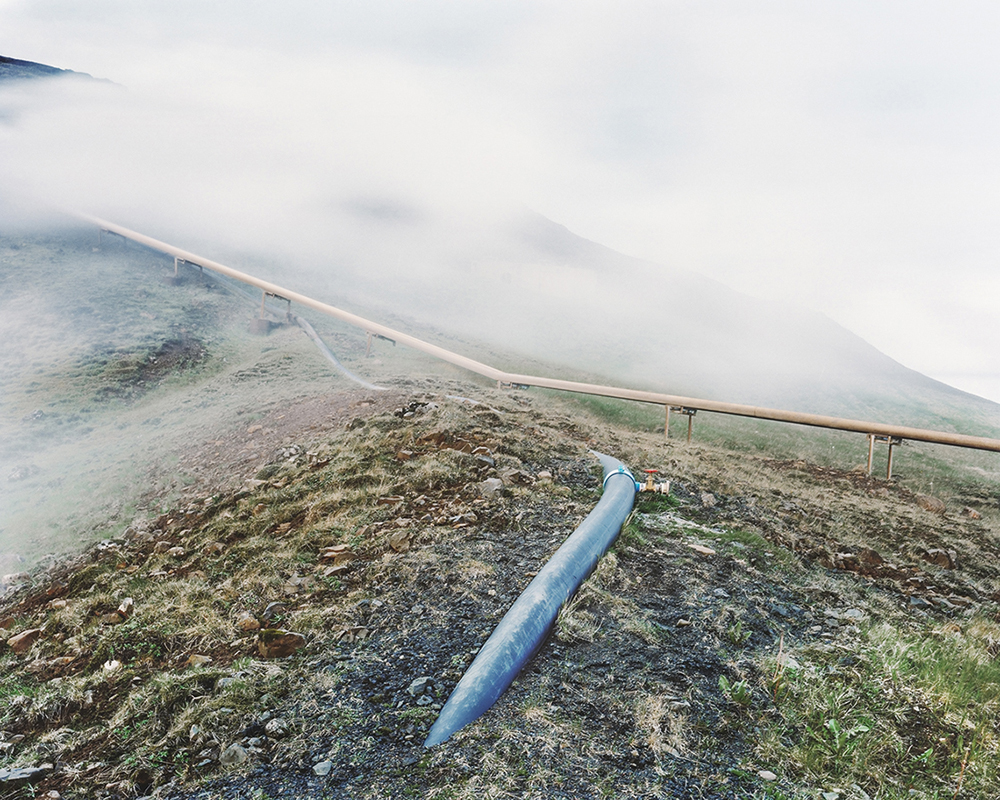 Rift 20 – Nesjavellir Power Station, Reykjavik. Located near the historic site of Pingvellir and the Hengill Volcano, Nesjavellir is the second largest geothermal plant in Iceland. It produces municipal hot water and electricity to the capital city of Reykjavik. ©Marion Belanger 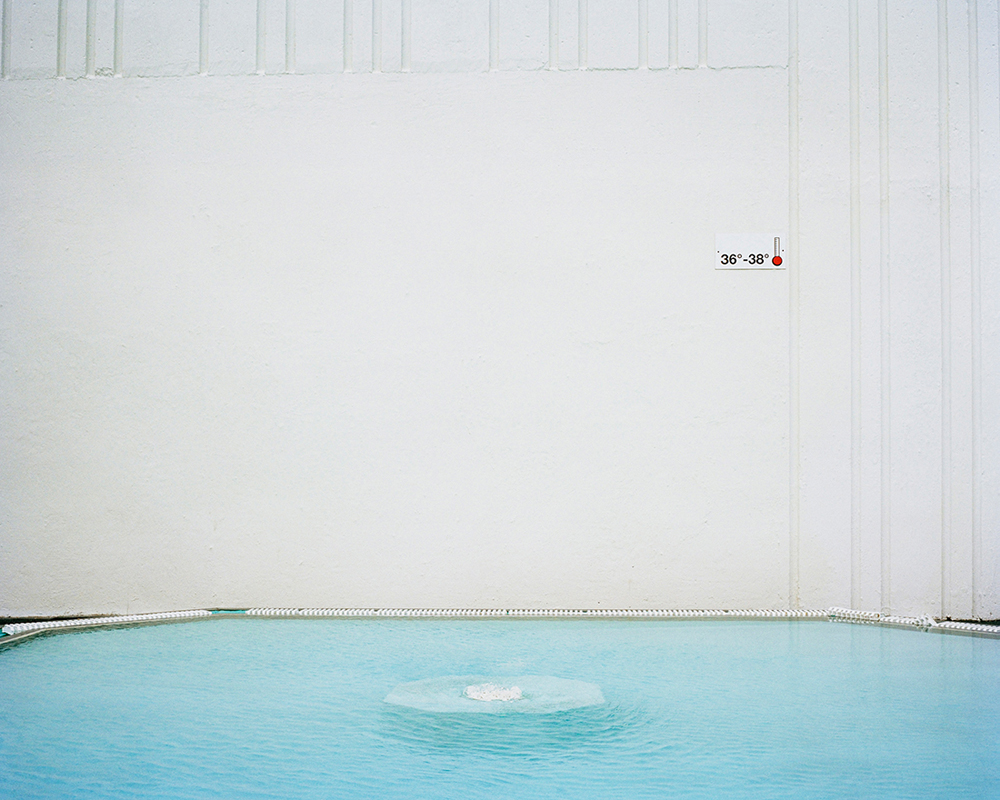 Rift 18 – Hot pool, Laugarvatn, Located in the inlands of Árnessýsla, Laugarvatn shares its name with the shallow, heated from underground lake where the town is sited. Almost every town in Iceland has a volcanically heated public pool. Pools in Iceland serve as an unofficial town social center, and it plays an important role during the long, dark winters. This pool, formally heated naturally, has been replaced with a modernized hot springs spa. ©Marion Belanger