Southbound: Photographs of and about the New South, Day 7 by Julia BennettMarch 11, 2019 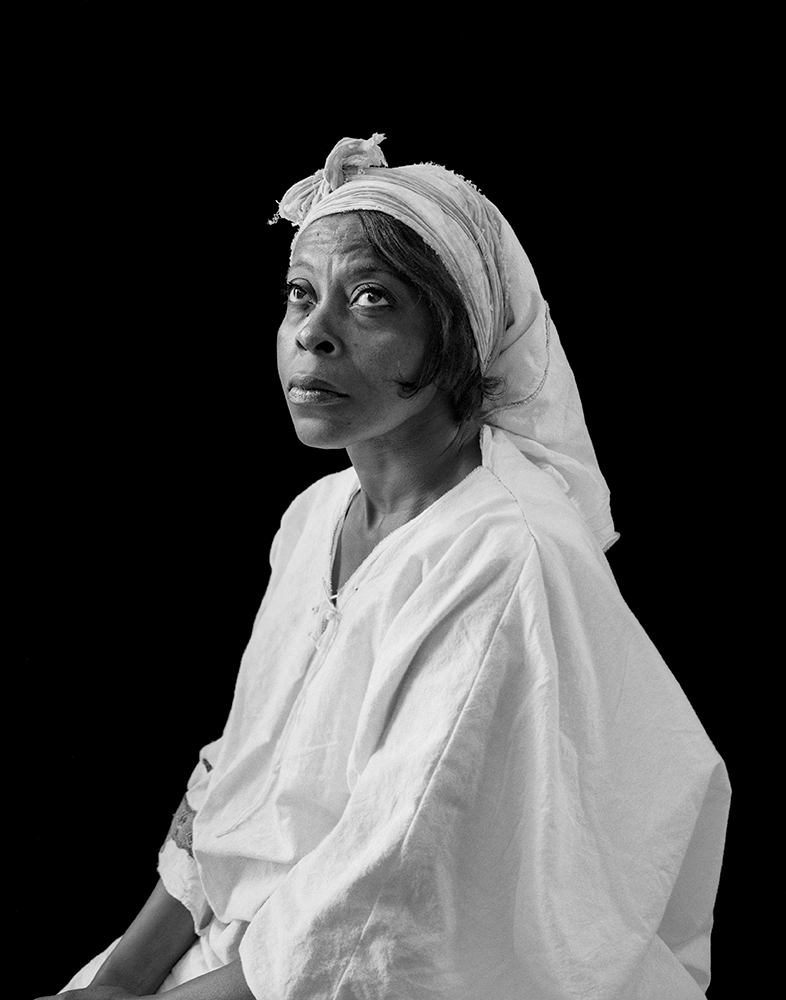 On our final day of posts for Southbound: Photographs of and about the New South, we feature a selection of the co-curators Mark Sloan and Mark Long’s essay on emplacing the new south. I think that there is no better text to summarize the exploration of Southern identity and culture that we’ve featured throughout the week, so without further adieu…

Each component of this project’s title—Southbound: Photographs of and about the New South—lends itself to scrutiny. Southbound refers to the twin ideas of heading south and the lingering effects of charged stereotypes that limit our ability to see the region clearly. Photographs refers to documentary and fine art images but, in this case, does not include constructed or fabricated photographs. New and, particularly, South are perhaps the most slippery elements of the title. South because, like all regions, it is necessarily a function of how we define the parameters—climatological, historical, cultural, and so on. New for the many instances that adjective has qualified developments in the South, often purportedly definitive in terms of change, and always to create distance from lesser and sometimes unsavory moments in the region’s history. Indeed, we considered calling the exhibition New South2, then cubed, and might have settled on New Southn, if it weren’t too cryptic to be clever. 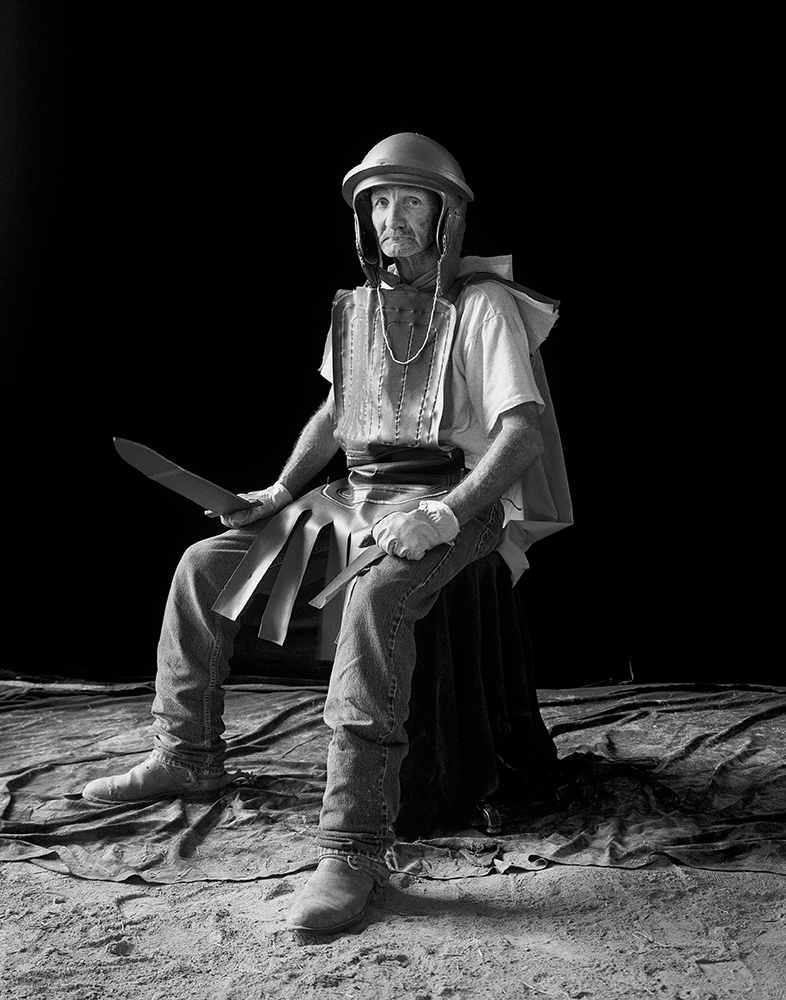 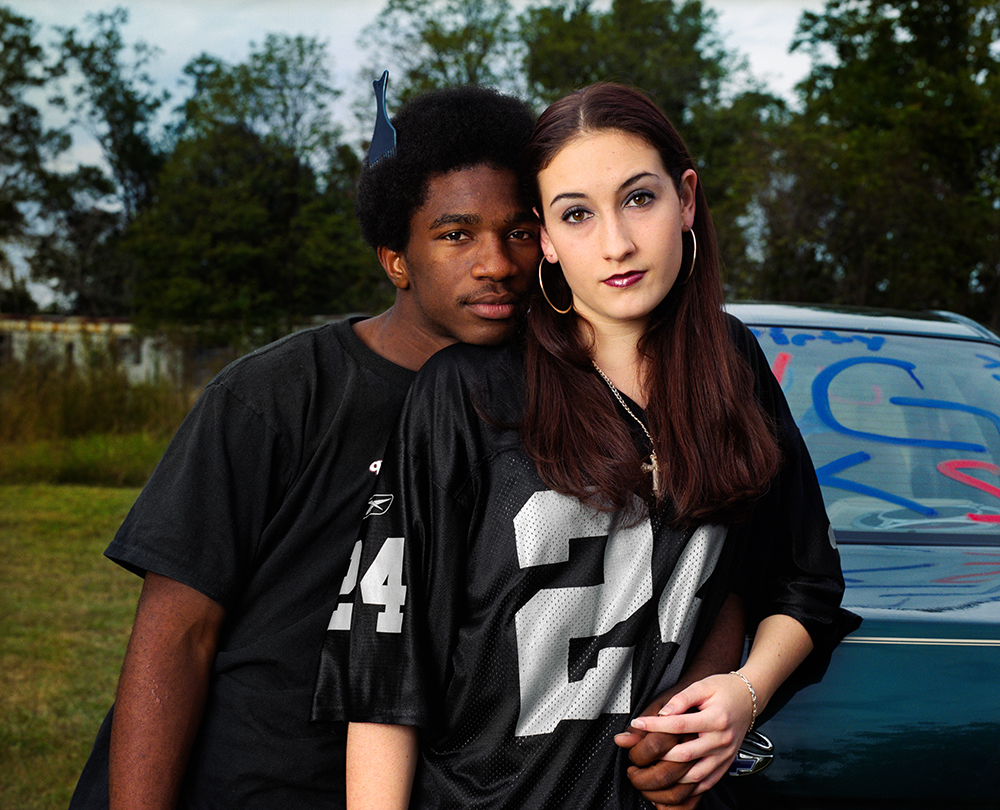 Julie and Bubba, Mount Vernon, 2002. From the Southern Rites series. Mount Vernon, Georgia © Gillian Laub “Bubba was my first love. We dated from eighth grade until my junior year in high school. Some friends started to tell me they couldn’t hang out with me anymore. That hurt, because they were my friends since kindergarten. And I didn’t think they were bad people, just scared.”—Julie 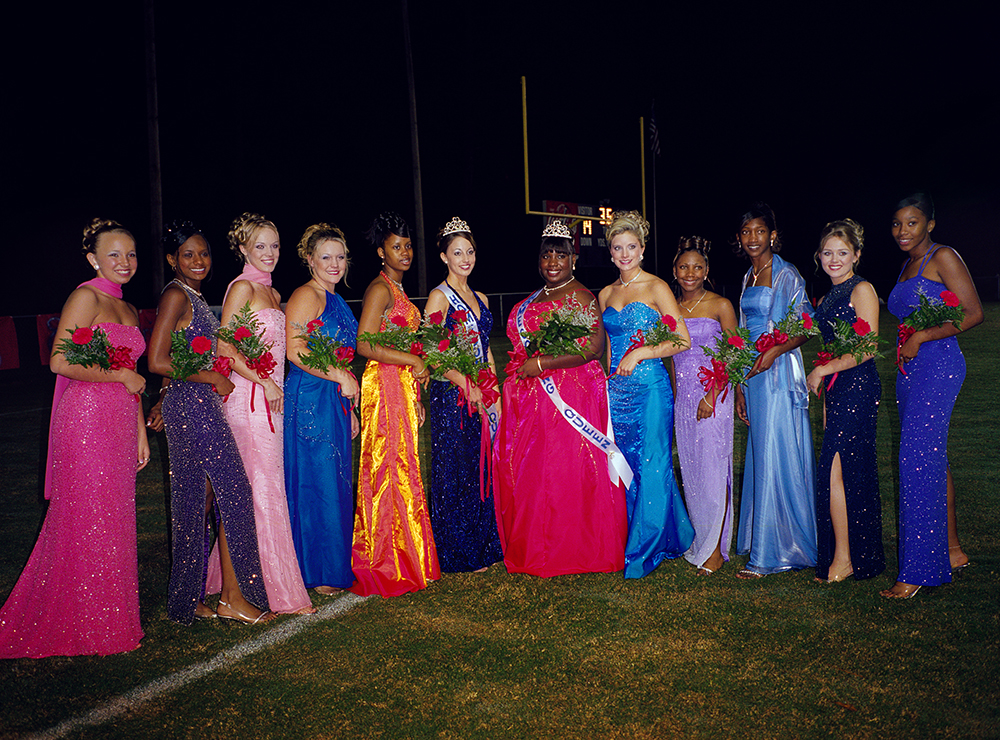 Successive generations of Southerners have laid claim to theirs as a region in transformation, new for the constellation of social and economic changes reconfiguring life there, ever since the term New South was coined in the decades after the Civil War by an Atlanta newspaper editor to promote the transition from plantation agriculture to industrial economy.[i] The year 2000, benchmark for the selection of photographs for inclusion in Southbound, presents a tantalizing proposition in reaching, again, for the idea of a New South as we swing into a new century and millennium. Yet there are processes of change, some long since underway in parts of the region and, now, increasingly in evidence region-wide, that together recommend this as a newest New South. 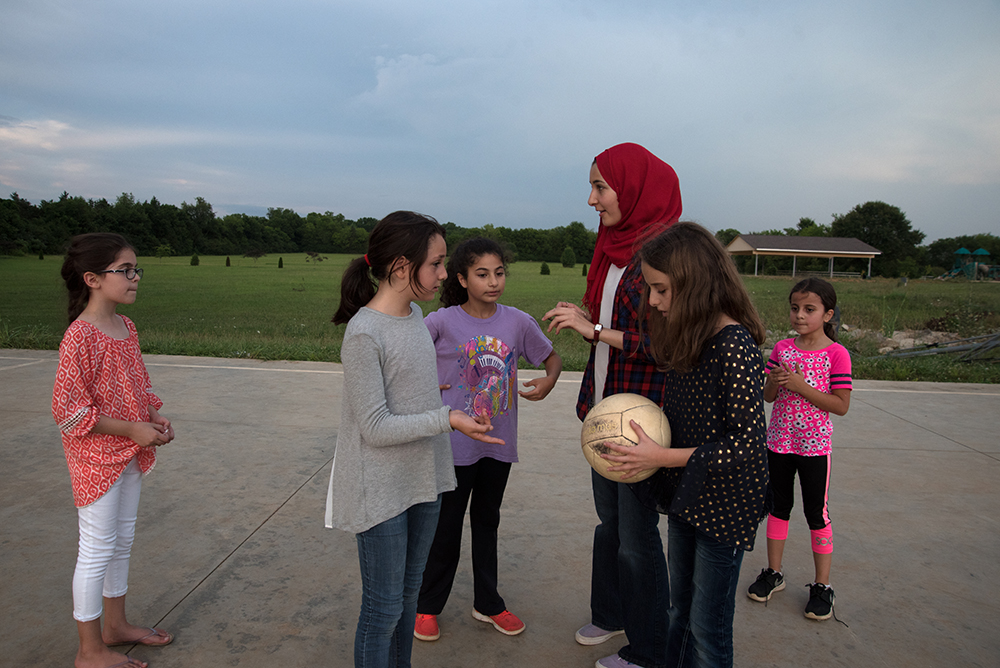 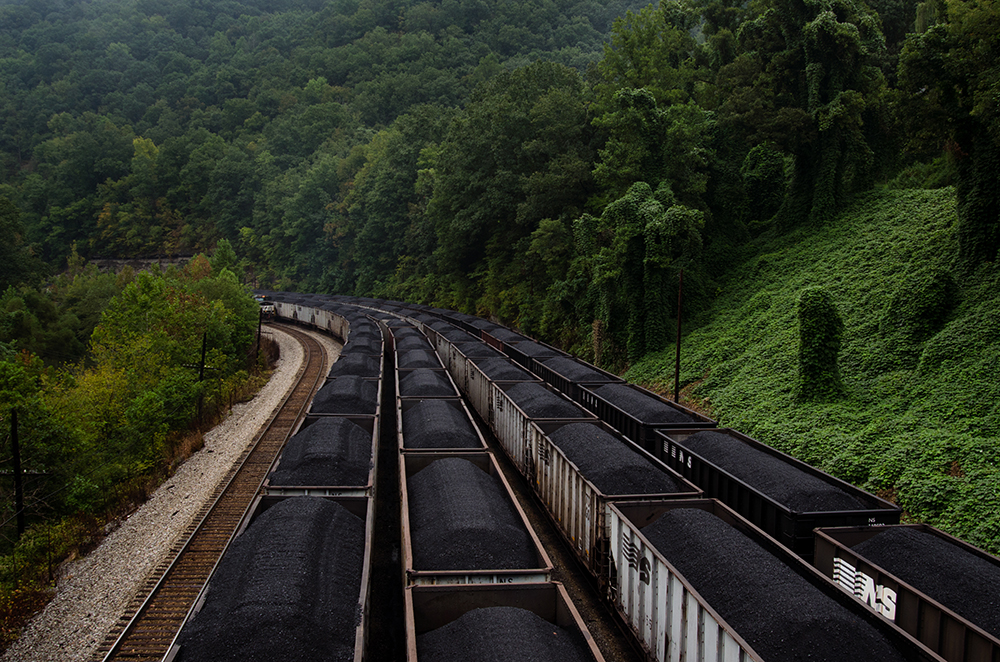 If the South is indeed being transformed in the early twenty-first century, then demographic changes like the influx of Latin Americans throughout the region are part and parcel of that process.[i] So, too, are the ongoing reversal of the Great Migration and the decision of retirees from northeastern and midwestern states to relocate here.[ii] All of these new Southerners enrich the cultural map of the region, contesting received truths about the South. Many of them take residence in boomtowns along the coast, and some move to cities undergoing wholesale urban renewal as people rediscover downtowns as places to live.[iii] This changing urban map is underpinned in part by massive infusions of both international and domestic industrial and financial capital.[iv] All of this is taking place, moreover, in a region being remade by the digital revolution.[v] The amalgam of demographic, urban, economic, technological, and concomitant social changes makes for a vibrant New South.

Modernization entails an array of transformative forces like these being unleashed upon a place.[vi] In that sense it is synonymous with Americanization worldwide, and while the outcome of processes of change is always syncretic and cuts both ways, the net effect is one of making places more similar over time. Partly for that reason, people often look to traditional identities as anchors in a changing world, and, in that light, perhaps, photographers working in the region may be drawn to local distinctiveness over homogeneity. Similarly, many of our decisions around what to include in Southbound foreground the particularity of this place. 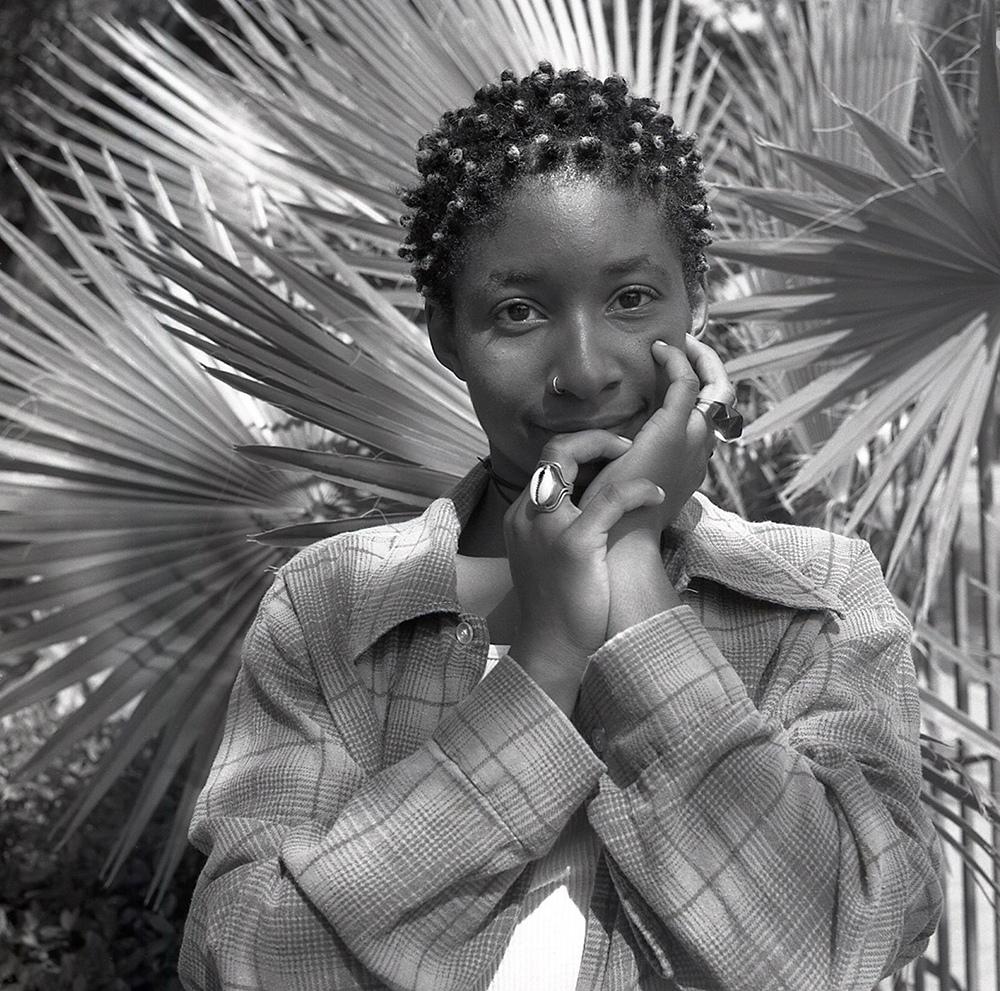 Young Woman, Elysian Fields, 2007. From the Someday You Will Be a Memory series. New Orleans, Louisiana © Kevin Kline 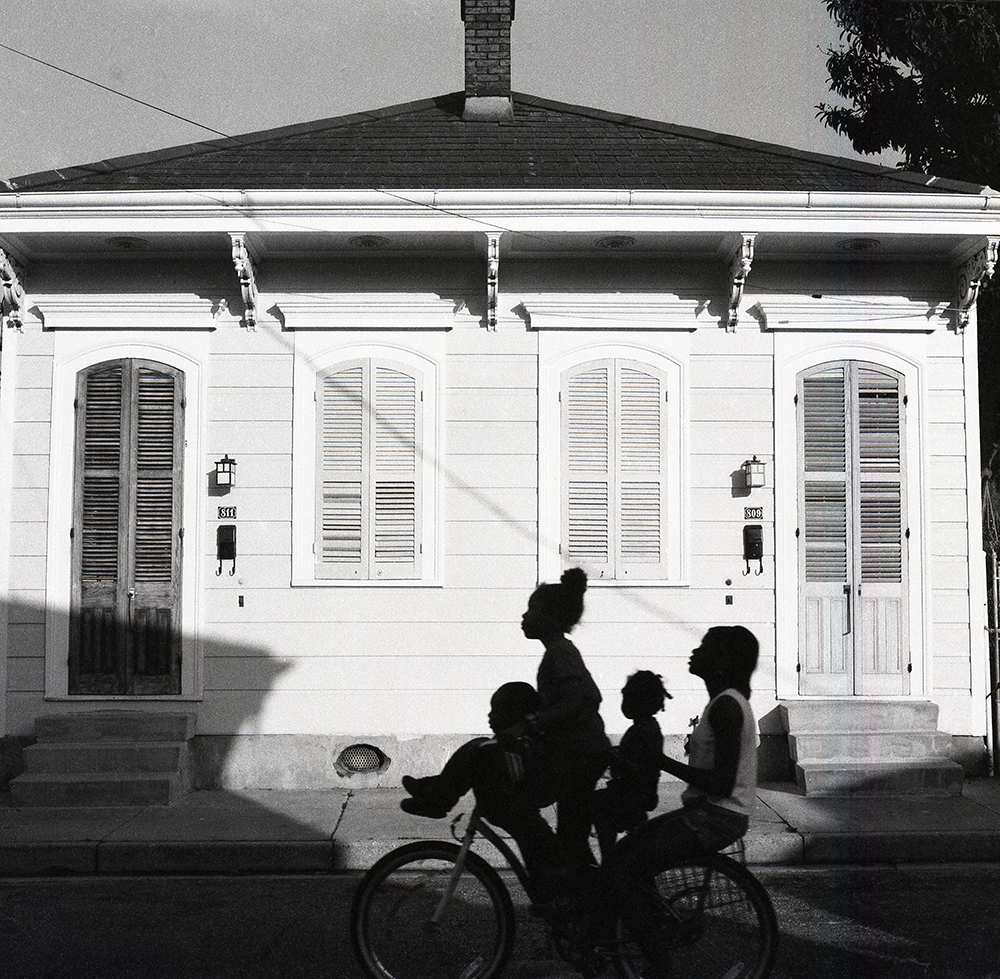 Four on a Bike, Piety Street, 2010. From the Someday You Will Be a Memory series. New Orleans, Louisiana © Kevin Kline

To experience the South on the ground as we researched the project, both in the field and remotely through the Southbound photographs and the Index of Southerness maps, was to encounter the resilience of the region.[i] The Southbound photographers stress a connection to place at scales that range from the regional to the local to the micro-geography of a juke joint in the Mississippi Delta. That connection speaks to our absolute dependence on the organic world, with all its connotations of traditional ways of being, something underplayed by many in our headlong rush to be on to the next brightest thing, and, for some, secondary to our looming digital existence. Senses of place in the South crystalize in the spaces between today’s emerging New South and echoes of Souths past.

Today’s South, then, can be intuited in the tensions between celebration of the past as seen in the work of photographers such as Thomas Daniel, gone native with a band of Civil War reenactors, and trepidation that we should repeat the mistakes of that past as explored by Eliot Dudik in his revisiting of Civil War battlefields, or in Gillian Laub’s photographs of segregated proms that bear witness to disturbing holdovers from the region’s history. It is manifest in cycles of boom and bust for industries from tourism to construction, as reflected in the photographs of Kyle Ford and Daniel Kariko. It can be found in the urban experience in Atlanta and Nashville, photographed by Mark Steinmetz and Greg Miller, respectively, that rural dwellers in Madison County, North Carolina, and in intentional communities across the region recoil from, as pictured by Rob Amberg and Lucas Foglia in their projects. The region is plain to see in photographs of longstanding communities in Shelby Adams’s Kentucky, Eugene Richards’s Arkansas, and Brandon Thibodeaux’s Mississippi, yet it is also evident in images of new arrivals to Susana Raab’s Florida and Rachel Boillot’s North Carolina.

[i] Christopher A. Cooper and H. Gibbs Knotts, The Resilience of Southern Identity: Why the South Still Matters in the Minds of Its People (Chapel Hill: The University of North Carolina Press, 2017). 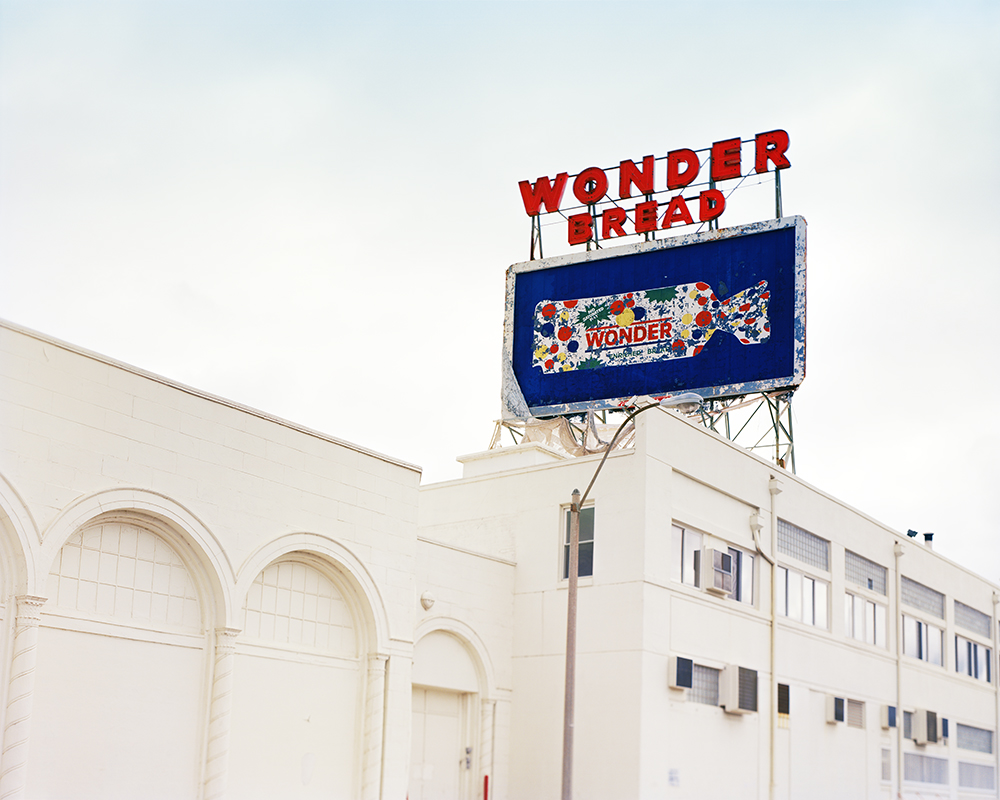 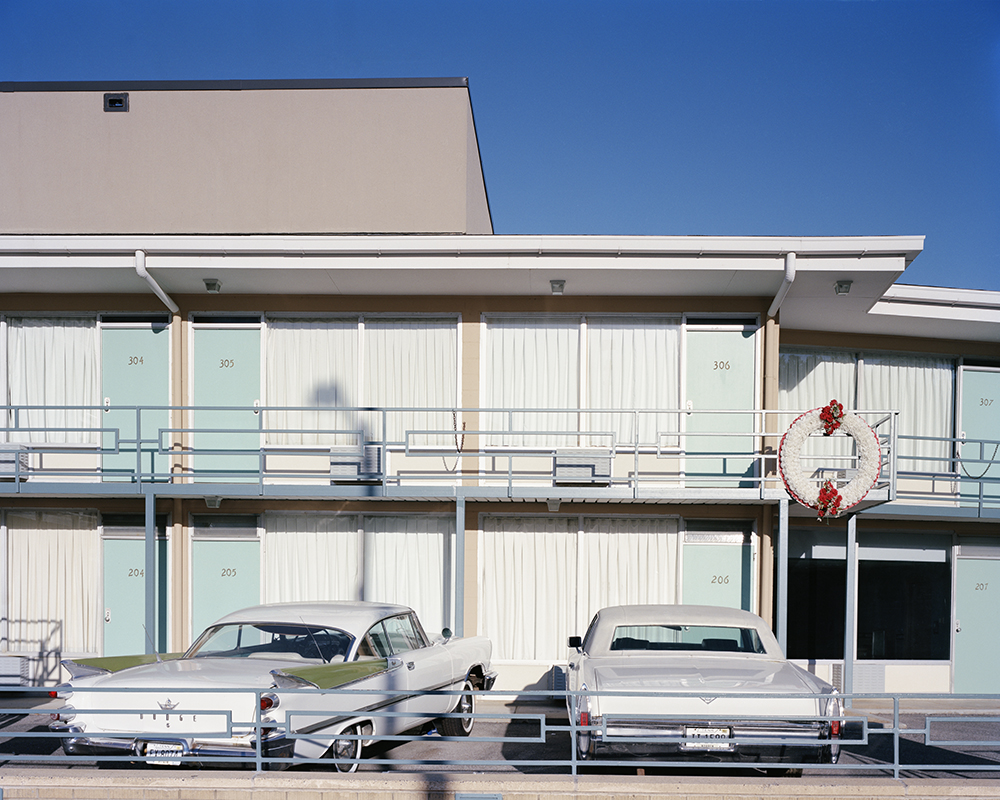 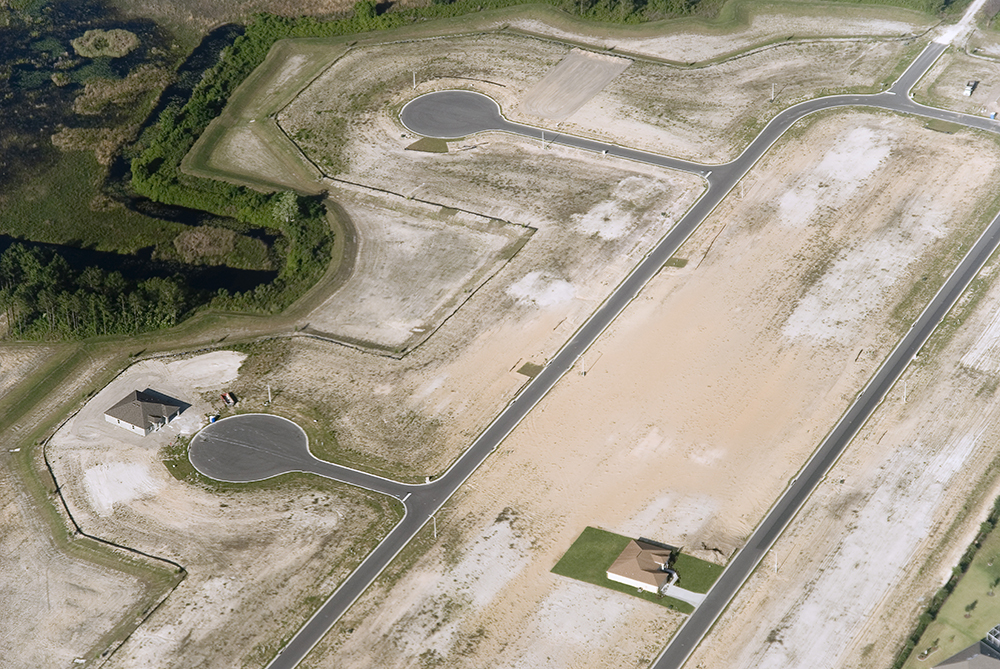 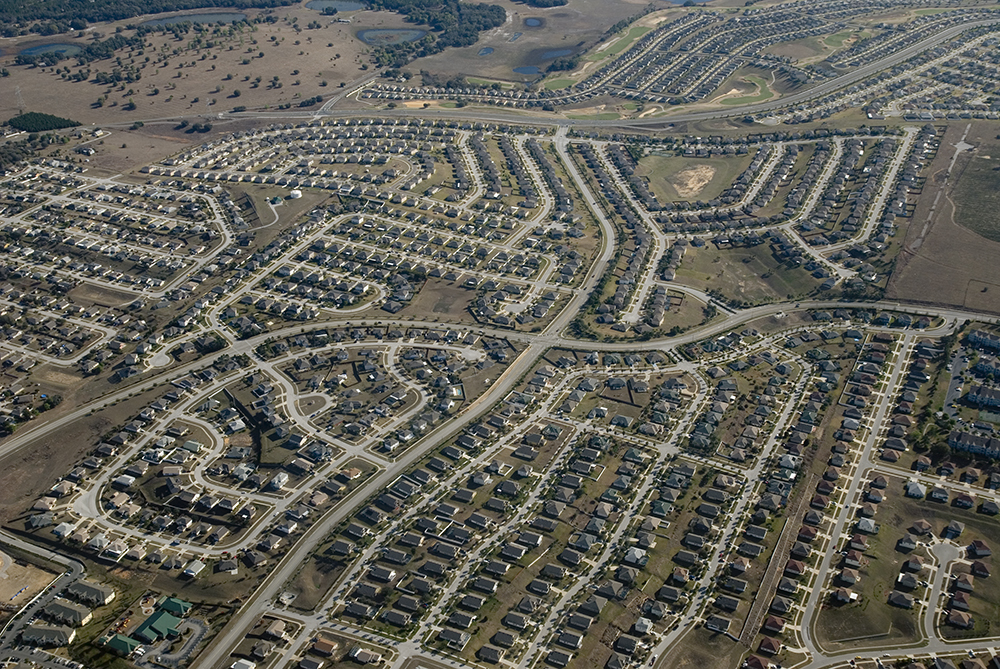 Michelle Van Parys’s photograph Overpass with Flag (2015), from her Beyond the Plantation series, encapsulates the conundrum of the region. Layered into the image are a live oak tree and Spanish moss, water and marsh, high tension cables, an interstate highway overpass, and an industrial plant above which flies the Stars and Stripes, all inviting us to peer through our preconceived notions about this place to see a New South. The contradictions inherent in the region are also on display in Alex Harris’s Grand Marshals Ball, Battle House Hotel (2010), from his Where We Live series, which shows a group of elegantly attired African Americans celebrating in a grand ballroom. The ballroom is decorated with a tapestry depicting log cabin colonials, one of whom is reading from a parchment that, for the ship moored over his shoulder, might be a manifest detailing the most nefarious of all cargoes transported to these shores. Even though so much of the South’s history is bracketed by those groups, the easy and joyous leisure of the revelers suggests that much has changed.

In his photograph Garden Party (2012), from his The Invisible Yoke, Vol. III: The Seven Cities series, Matt Eich’s juxtaposition of a portable air-conditioning unit—synonymous with the economic rebirth of the South during the decades after World War II—with bejeweled ladies in period dress conversing at the Virginia shore, also speaks to long trajectories of change within the region. Near the women are plywood cutouts of a dog and cat, and, in the distance, quayside ship-to-shore gantry cranes line the waterway at one of Norfolk’s container ports. Future changes, too, are alluded to in Keith Calhoun and Chandra McCormick’s scenes from the aftermath of Hurricane Katrina in New Orleans and in Stacy Kranitz’s portraits from America’s first climate refugee community on Isle de Jean Charles in Louisiana. Bellwethers of the environmental challenges facing the South and elsewhere, these images charge the region with foreboding. 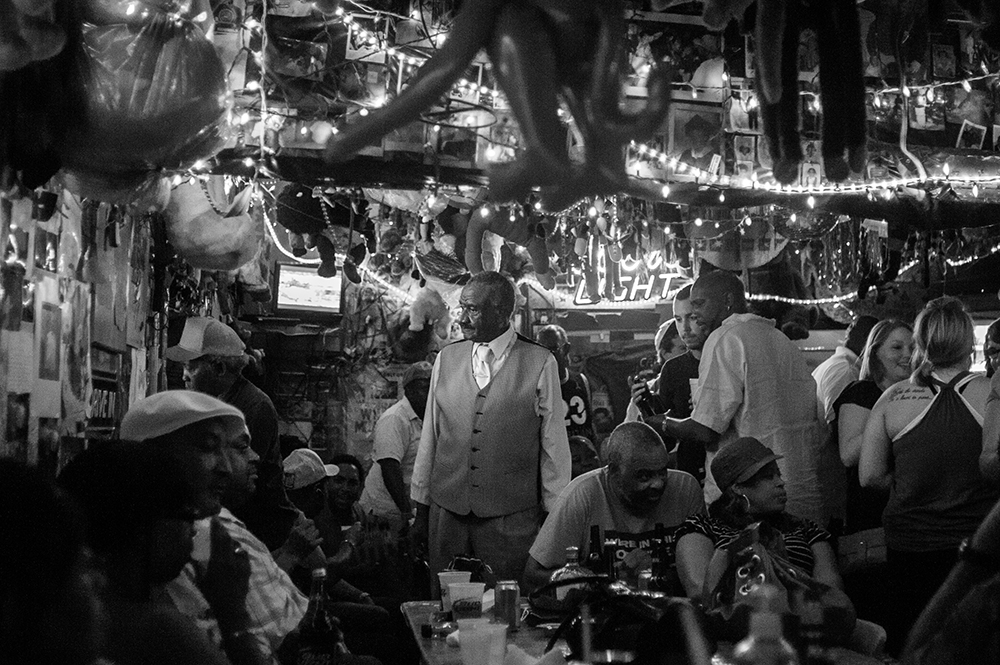 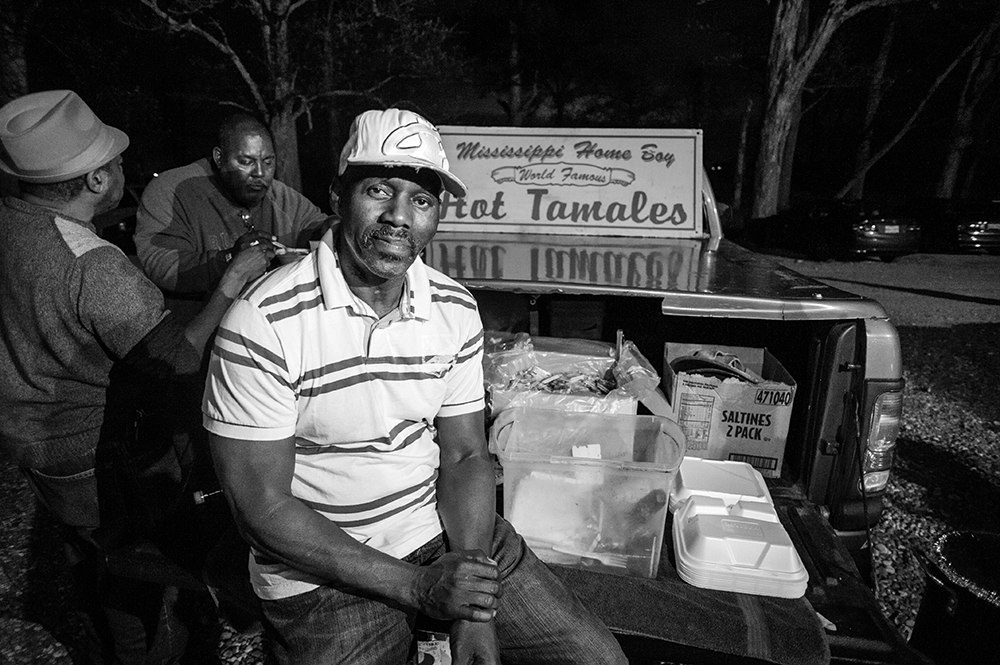 Darrell, 2016. From the Portrait of a Juke Joint series. Bolivar County, Mississippi © Will Jacks

The New South is revealed in Jessica Ingram’s Stone Mountain Confederate Memorial Carving, Stone Mountain, Georgia (2006), from her Road through Midnight: A Civil Rights Memorial series. The photograph shows an African American woman in an aerial tram car, swinging up to the top of a colossal granite monolith that features what is ostensibly the world’s largest high-relief sculpture, brainchild in part of the same sculptor who created Mount Rushmore, Gutzon Borglum.[i] As that African American day-tripper trains her camera on the Confederate generals carved into the mountainside at the site of the rebirth of the Ku Klux Klan a century ago—and now given over to tourism, hiking, and shopping—the momentary dissonance recreates the vertigo of Stone Mountain’s Summit Skyride and we fall headlong into the complicated place that is the New South.

The tension between stasis and change defines today’s New South, as it will future New Souths in turn. Southbound holds a mirror up to friction along the seams of ongoing transformation in the region—halting, heady, and traumatic as it may be—revealing of the places the South was, is, and will in all likelihood become.

NEXT | DEVELOPER: Madeline Cass >
< Southbound: Photographs of and about the New South, Day 6 | PREV