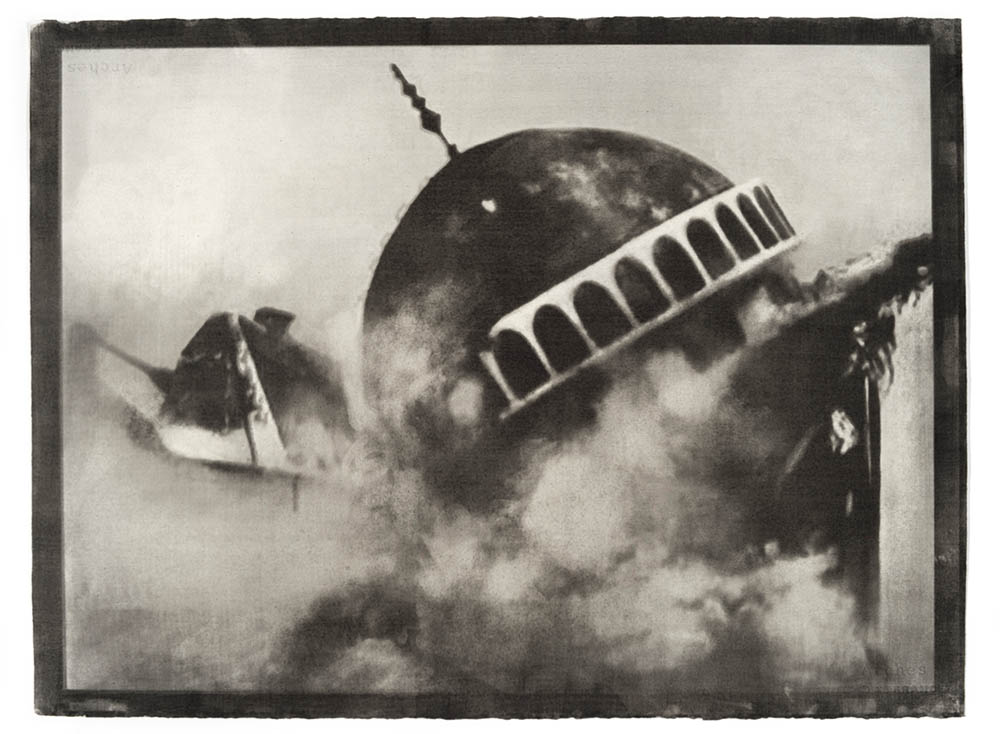 The exhibition Asymmetric Warfare recently opened at the Colorado Photographic Arts Center, presenting the work of Justyna Badach, who examines how modern-day military propaganda shapes our perceptions of war and conflict. The show includes work from two ongoing projects: Land of Epic Battles and Proxy War, in which Badach uses her computer as a camera to capture screen shots from ISIS recruitment films and the devastation resulting from the “War on Terror” waged by American and Russian military forces. The artist is interested in how both ISIS and the military increasingly generate “media that feeds on viewers’ addiction to social media, exploits the voyeuristic lure of reality TV, and nourishes their audience’s desire to watch what is socially taboo,” she writes.

Using gunpowder as a pigment, Badach literally weaponizes her images. She consciously chooses to shield the viewer from grotesque mutilated bodies and depictions of torture that are the hallmark visual brand of most ISIS videos — choosing instead to suggest the violence through her use of titles taken directly from the ISIS episode in which the image appears.

“These titles, such as The Necks Cutting, Crush Your Enemies, or My Revenge, lend context and form to what at first glance may seem like a series of random objects and sites,” she said. “An image that resembles a graphite drawing of an empty truck in the desert or a helicopter hovering in a cloud-filled sky is indeed innocuous, until we’re told that the context is ISIS-produced media and that the print itself is made of explosives.” 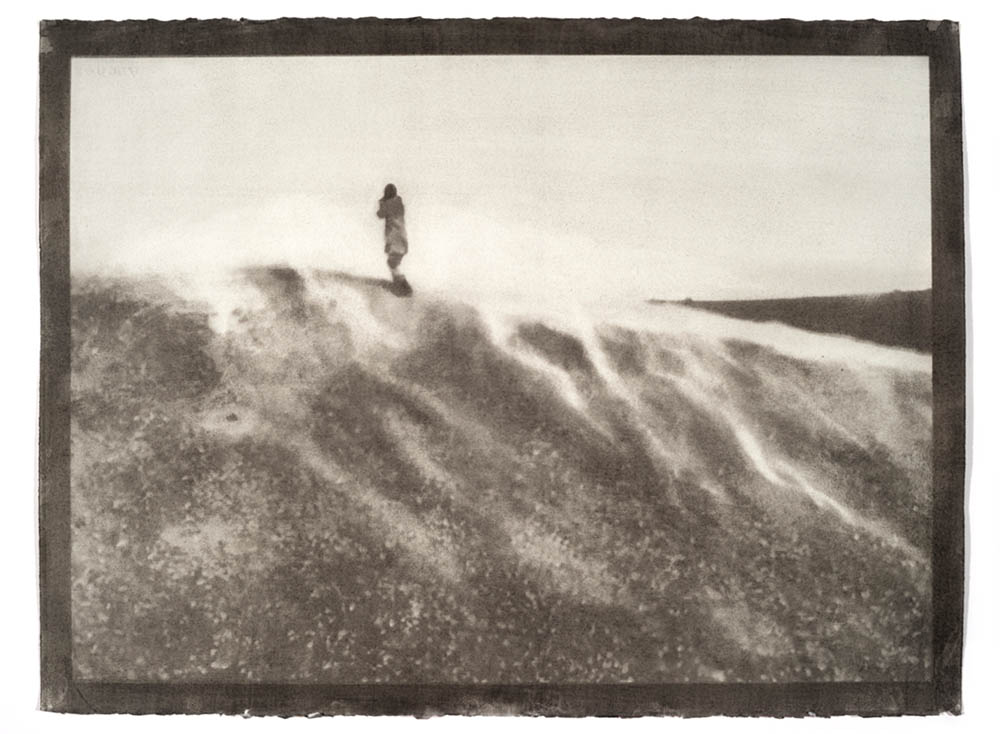 Justyna Badach arrived in the US as a refugee in 1980. She received her MFA from the Cranbrook Academy of Art and currently resides in Philadelphia, where she is an artist, educator, and museum professional. Her work has been exhibited extensively throughout the United States and abroad. Solo exhibitions include: Light Work Syracuse, White Columns New York, Gallery 339 Philadelphia, Blue Sky Gallery in Portland and Contemporary Art Center in Las Vegas. Badach’s images have been included in over 30 group exhibitions, most notably at the Michener Museum, Rick Wester Gallery, Catherine Edelman Gallery and the Australian Center for Photography. Her work has been reviewed extensively and images have been featured in Wired Magazine, Contact Sheet, F-Stop Magazine, Dummy Magazine and several exhibition catalogs. Badach’s work is the permanent collections of Portland Art Museum, Museet for Fotokunst Brandts, Odense, Denmark, Center for Photography Woodstock, Cranbrook Museum of Art, Rice University Library, Houston, TX, Temple University, Philadelphia, PA and Haverford College. She has been awarded an artist residency from Light Work, and grants from the Pennsylvania Council on the Arts, Leeway Foundation and The Independence Foundation.

Asymmetric Warfare is on view at the Colorado Photographic Arts Center in Denver through April 16, 2020. More information at cpacphoto.org/asymmetric-warfare. 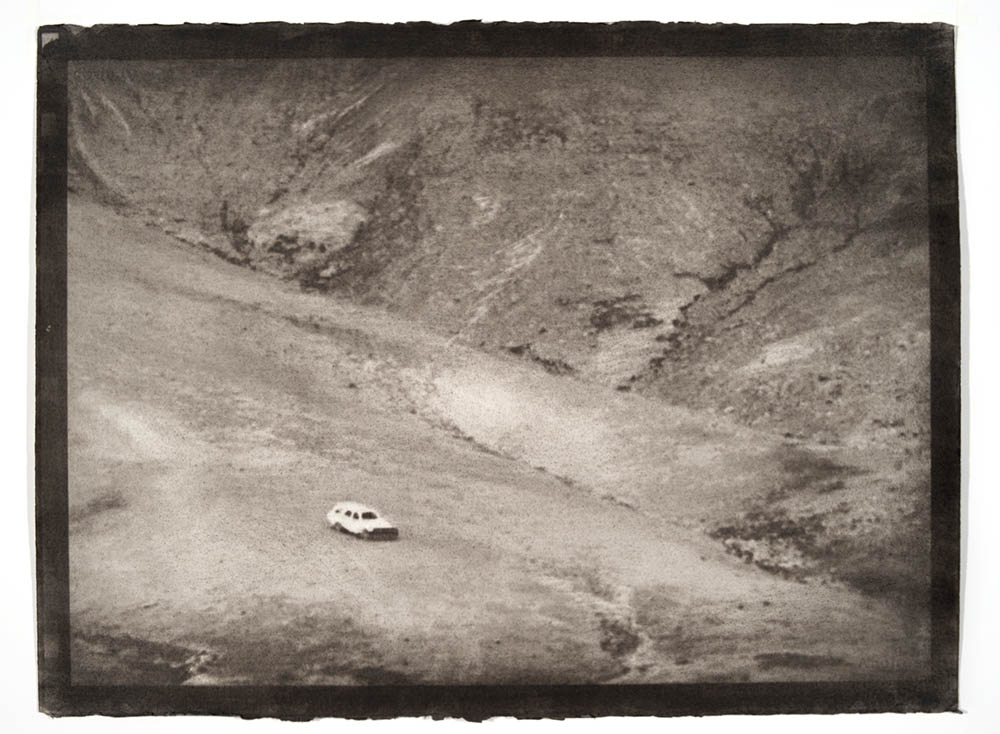 Revived by His Blood, ©Justyna Badach, from her series Land of Epic Battles 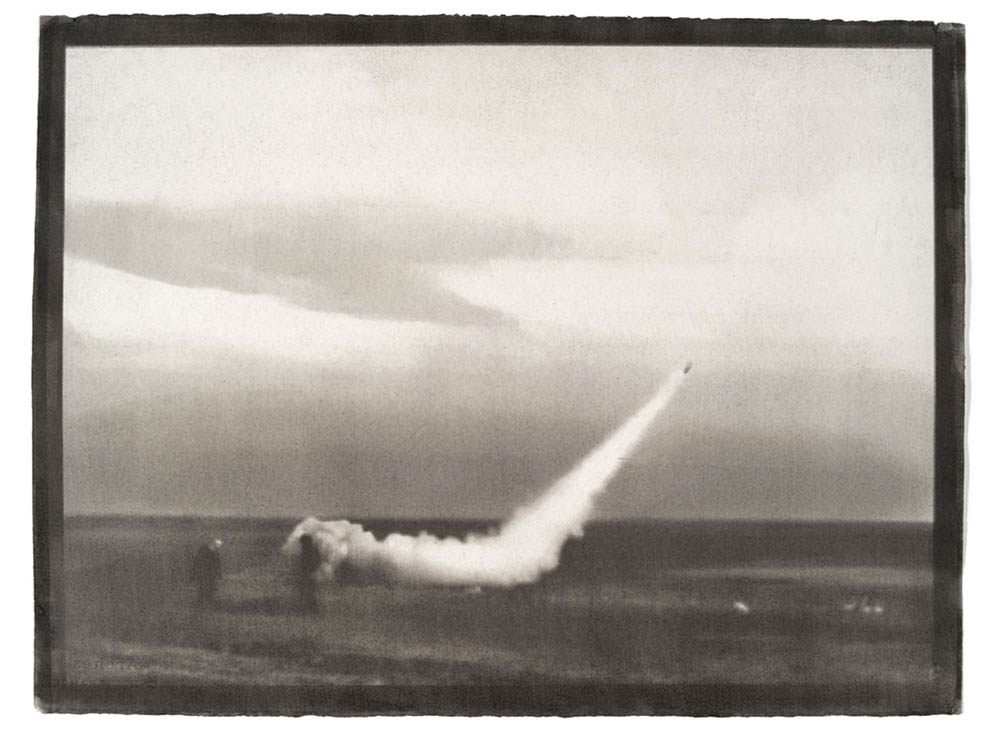 Their Assembly Will Be Defeated, ©Justyna Badach, from her series Land of Epic Battles

In Proxy War, Badach presents images printed at a monumental scale of the ongoing US and Russian military action in Syria, Iraq and Afghanistan.

Images of bomb blasts and skeletal remains of cities are paired with titles taken from language used by U.S. and Russian government officials at press conferences. Here, titles such as Diplomatic Pressure and Fighting for Our Enemy draw our attention to how military powers use language to obfuscate the catastrophic destruction of life that has resulted from the ongoing War on Terror.

Fighting for Our Enemy, ©Justyna Badach, from her series Proxy War

For Badach, these two projects are a way to “witness the pernicious forces at play in contemporary internet war media.”

“It is clear that our collective experience is becoming increasingly fragmented and the reality of global events is being defined and shaped by surreptitious media producers and algorithms designed to get as close as possible to viewers,” Badach writes. “Land of Epic Battles and Proxy War register the initial signs of a larger impending seismic shift that will inevitably alter our future collective experience and understanding of conflict and war.” 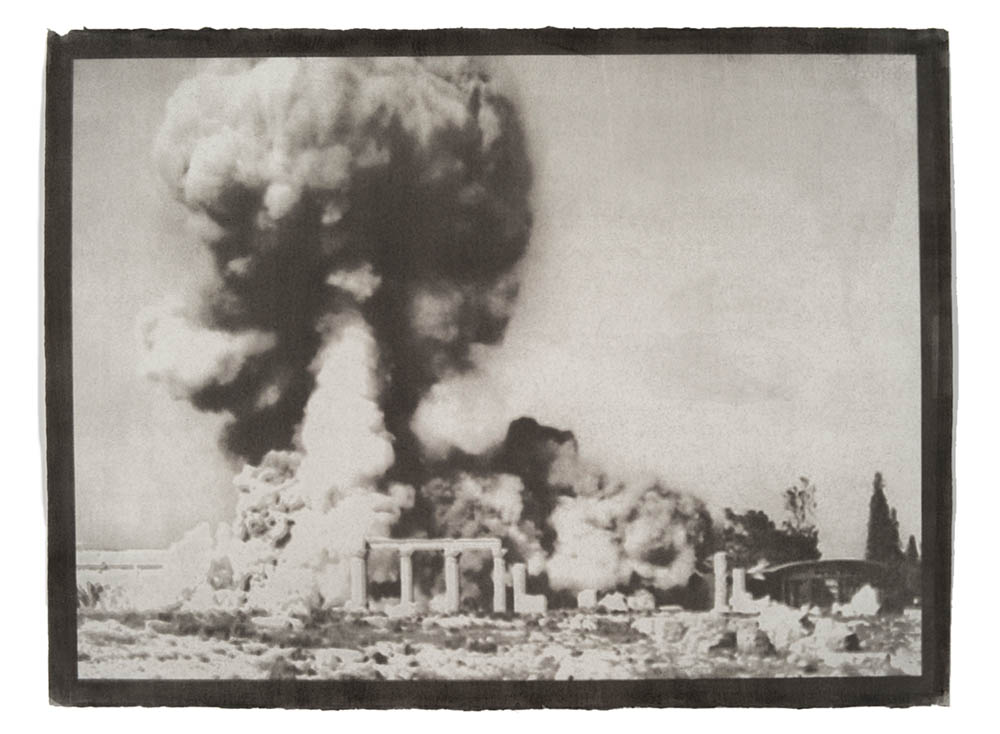 Palmyra 2, ©Justyna Badach, from her series Land of Epic Battles 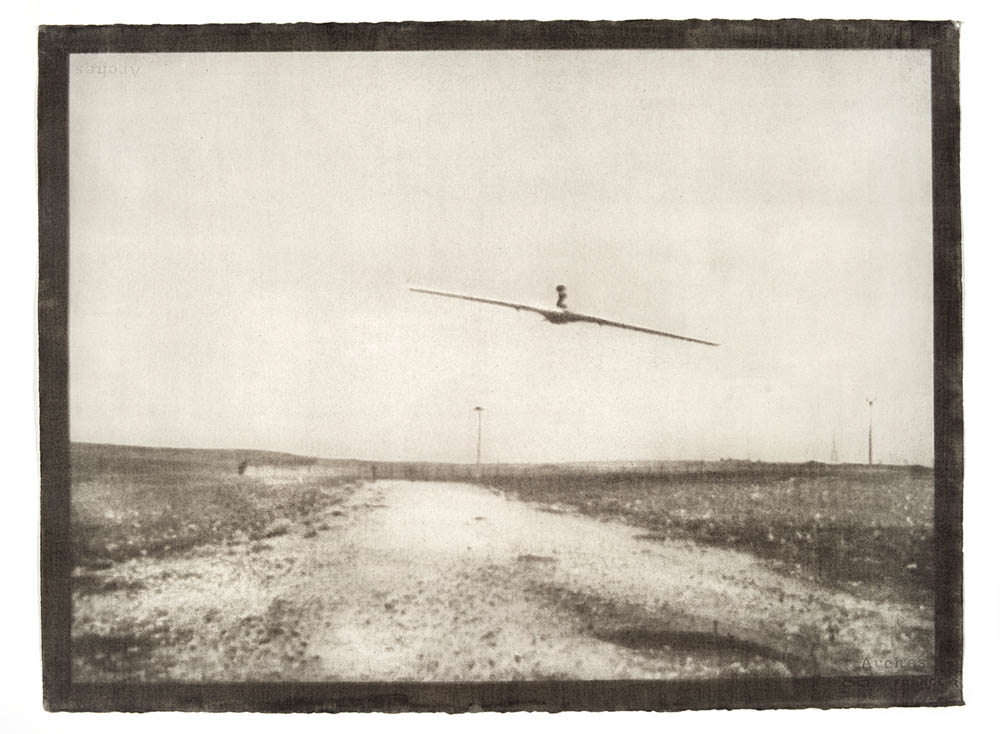 Knights of Dawawin, ©Justyna Badach, from her series Land of Epic Battles 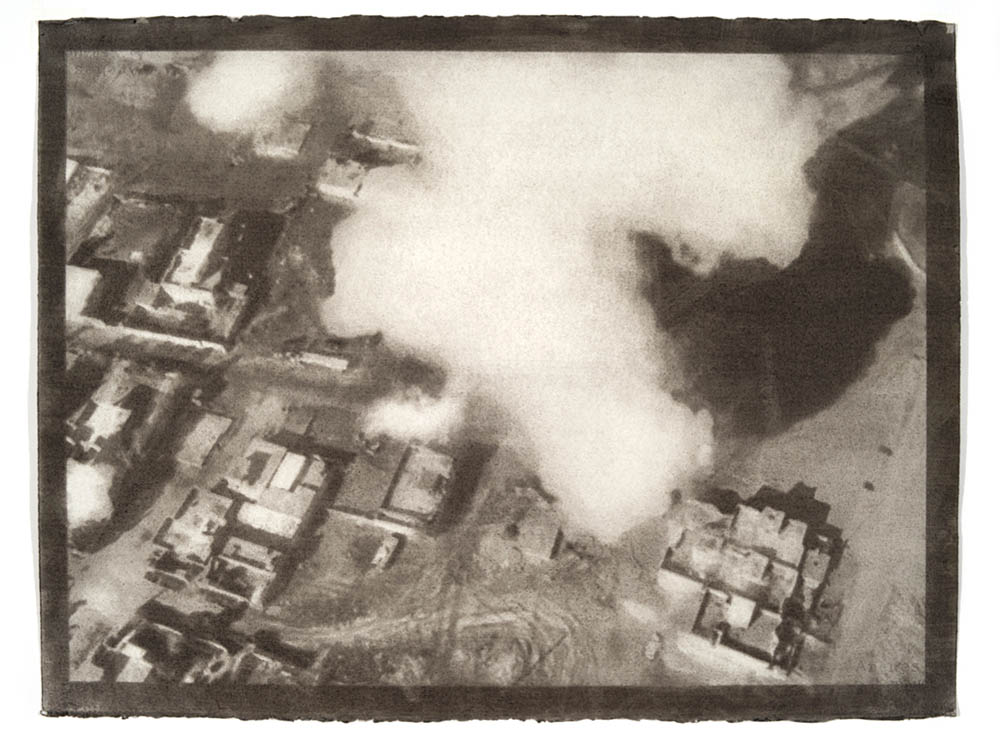 Knights of Dawawin 2, ©Justyna Badach, from her series Land of Epic Battles 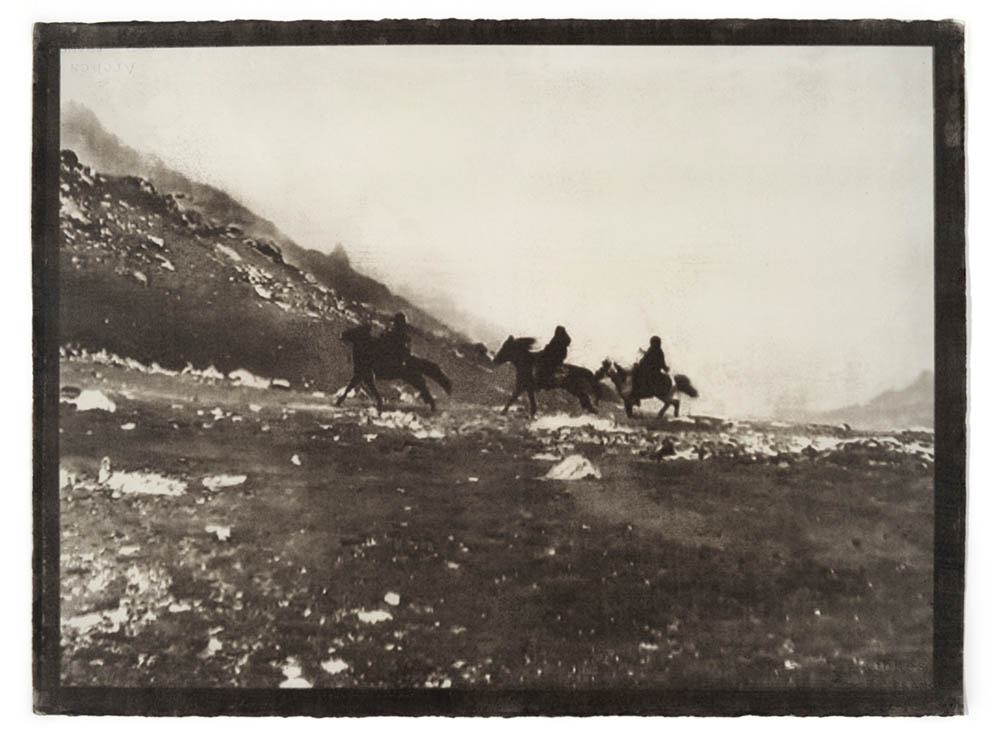 Killing the Apostates in Revenge of the Monotheists Khorasan, ©Justyna Badach, from her series Land of Epic Battles