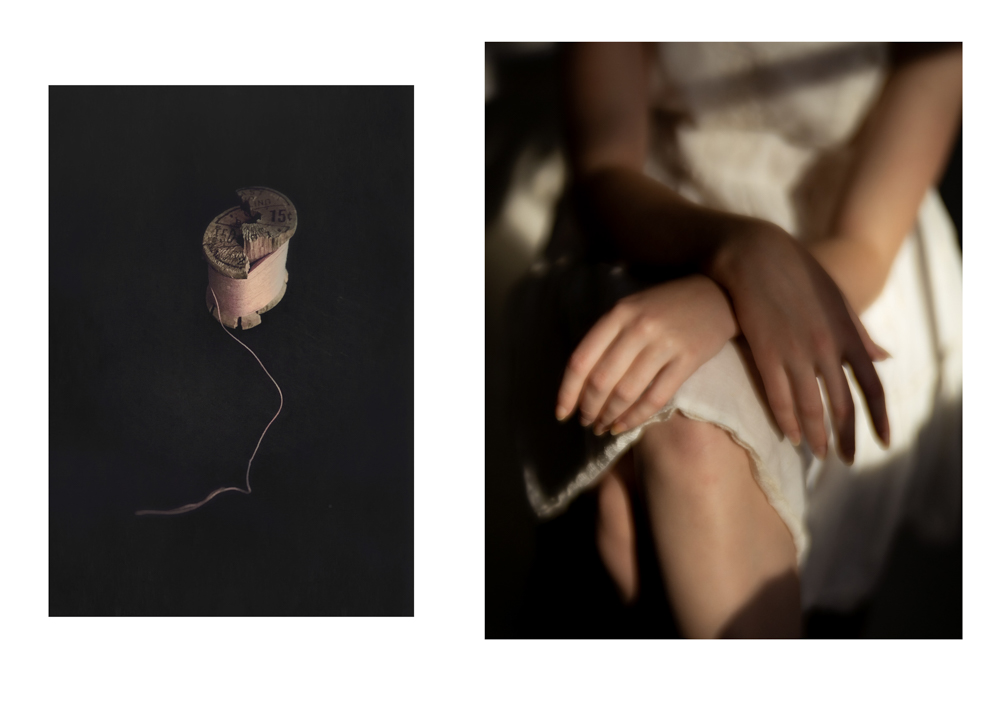 The Touchstones project began as a visual conversation between artists Sal Taylor Kydd and Dawn Surratt. This project has morphed into a deeper understanding of connection, adaptability and creativity as the world has been challenged with a life threatening pandemic. Through a series of photographic diptychs and poems, the work has evolved as a call and response, as each artist responds to the other’s work, building on the foundation of trust and understanding that continues to grow between the two artists. Instagram: @touch__stones 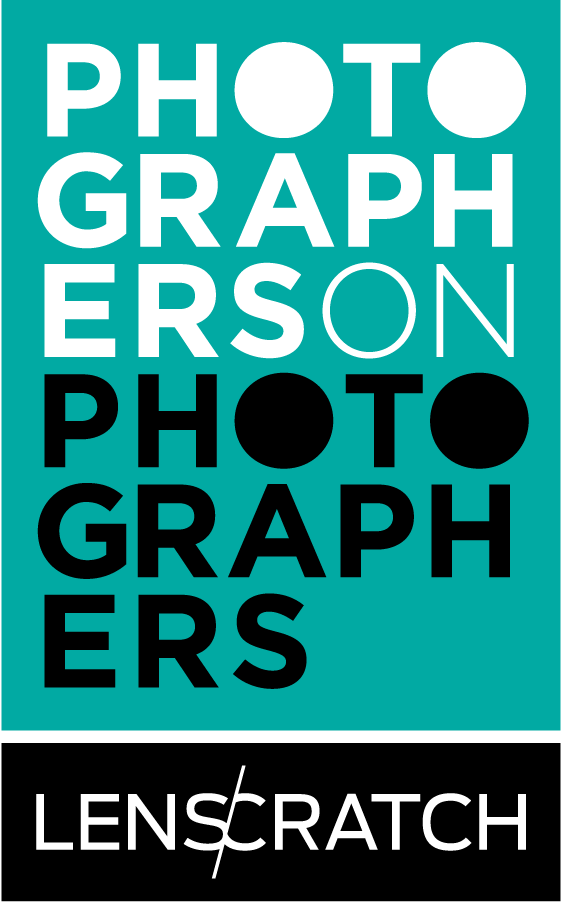 Dawn Surratt earned a B.A. in Studio Arts from the University of North Carolina in Greensboro and a Bachelor and Master’s Degree in Social Work from the University of Georgia. Her years of work with dying patients in hospice settings is the backbone of her imagery. She combines photographs with photography based book structures, installations, and objects as visual meditations exploring concepts of grief, transition, healing and spirituality.

Her work has been widely published for book covers and publications such as Time, Bloomberg Business Week, SHOTS, Diffusion and The Hand. She has exhibited in galleries across the United States including The Center for Fine Art Photography, Southeast Center for Photography, A.Smith Gallery, Photoplace Gallery and Power Plant Gallery. She was a 2016 Critical Mass Finalist and her work is in collections across the United States including the Rubinstein Library at Duke University, Archive of Documentary Arts. She is a 2018 nominee for the Royal Photography Society’s 100 Heroines and was just awarded Critical Mass Top 200 this year for her project The Silent Year. Instagram: @dawn_surratt

Originally from the UK, photographer and artist Sal Taylor Kydd earned her BA in Modern Languages from Manchester University and has an MFA in Photography from Maine Media College. Her photographs have been exhibited throughout the country and internationally, including New York,  Boston, Los Angeles, Mexico and Spain. Sal’s  work draws strongly on the landscape, focusing on her home, family and herself in conversation with the natural world. She focuses on the photographic object, the print, and her books to explore themes of memory and personal history.

Sal is also a poet, and has self-published a number of books combining her poetry with her photographs. Her books are in numerous private and museum collections throughout the country. Sal’s photography is represented by the Kingman Gallery in Maine and the San Miguel Photographic Gallery in Mexico and has been featured in numerous publications, including Don’t Take Pictures Magazine, Lenscratch, Diffusion and The Hand. Sal also teaches and is on the board of Maine Media Workshops & College in Rockport ME. Instagram: @sal.taylorkydd 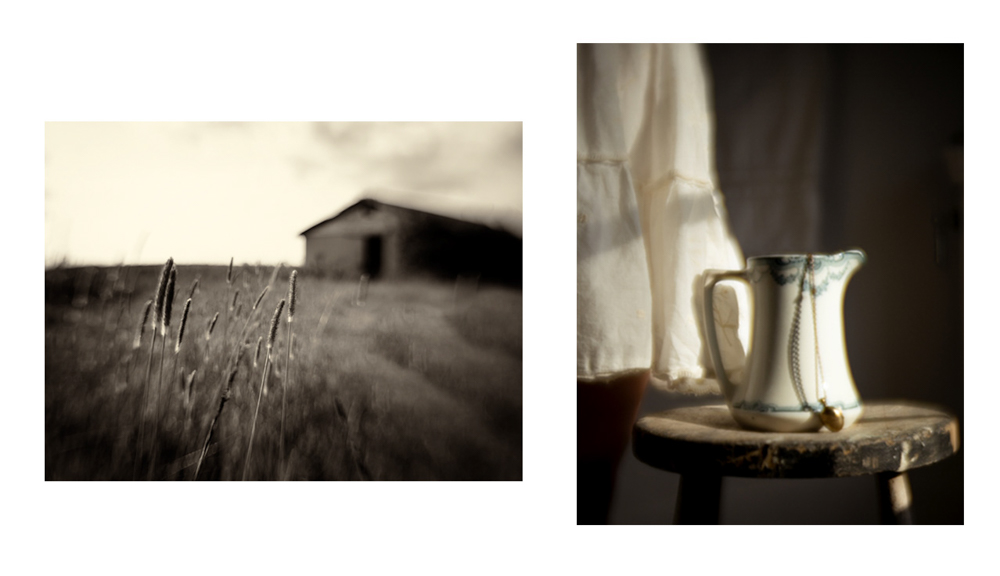 when you run your hands through the tall grasses,

do you remember their razor sharp feel?

time casts its long shadow on things once belonged

Dawn Surrat: I first learned of Sal and her beautiful work through Instagram. Her elegance with image and word completely inspired me and I felt like she was someone I had known all my life. We had the opportunity to finally meet in person during the Kindred show in Savannah last year and all of my suspicions about her wonderfulness proved correct. There are many common threads that unite our aesthetics and there are differences in our approaches and I think those differences provide an interesting tension that grabs hold of a viewer and invites them in. 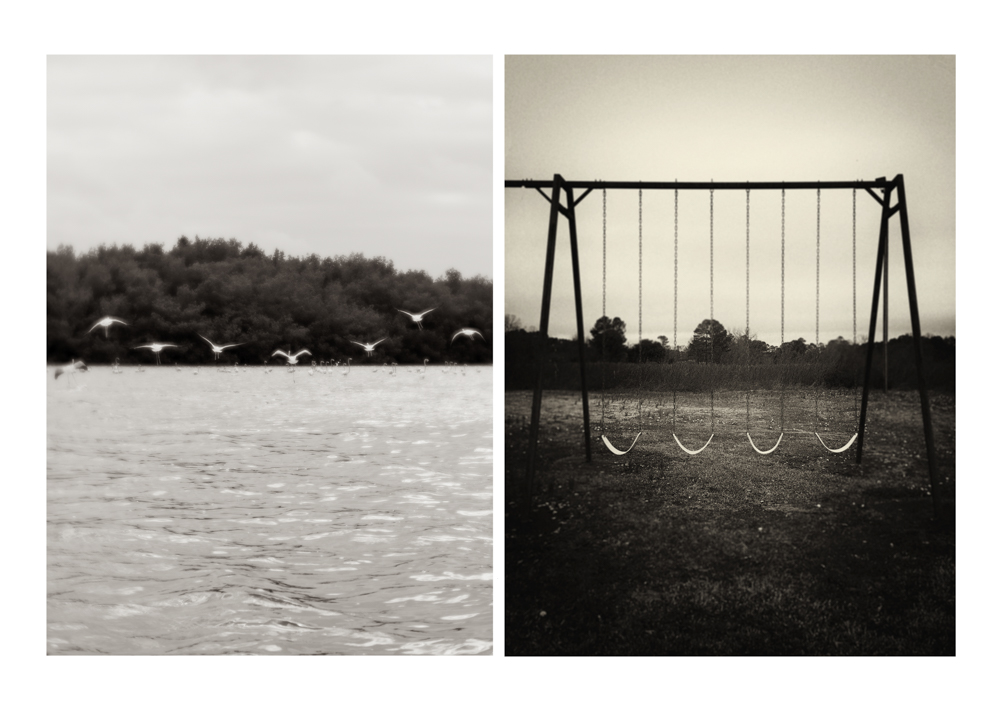 And though it seems

Sal Taylor Kydd: I had also discovered Dawn’s work online and had been following her for a while before Kindred. I was so moved by Dawn’s images that have a sensitive and ethereal quality that really resonated with me. There is an intelligence and a keenly observant eye that vibrates in her work which makes it particularly compelling. Dawn is a beautiful soul, and a very kind and generous collaborator.  The first time we created something together was in Kindred. Dawn had this beautiful piece and we wanted to use my words to frame it. I believe that even though the images or the framed pieces stand strongly on their own, the ability to integrate words, be it in book or installation form, has the power to take the viewer to somewhere entirely new, creating an extension or another interpretation that can enhance the narrative created by the images.

DS: During dinner one night, Sal and I discovered that we both live off of Rte.1 which stretches along the eastern coast. It seemed completely synchronous to know that she and I lived off of the same road and we started to riff off of that sense of belonging. Sal threw out the idea of a collaborative project and I leapt at the chance. It wasn’t hard to come up with ideas, it was harder to reign them in! We both have a deep love for image and text and for sure wanted to incorporate that into the project. The idea of an accompanying poem for each diptych seemed a natural fit. I struggle with the  writing bits, but I also knew that it would be a good stretch for me to write weekly. Not long after we fleshed out the idea for the project, the pandemic hit and the name Touchstones evolved from the grounding effect our connection had on each other. 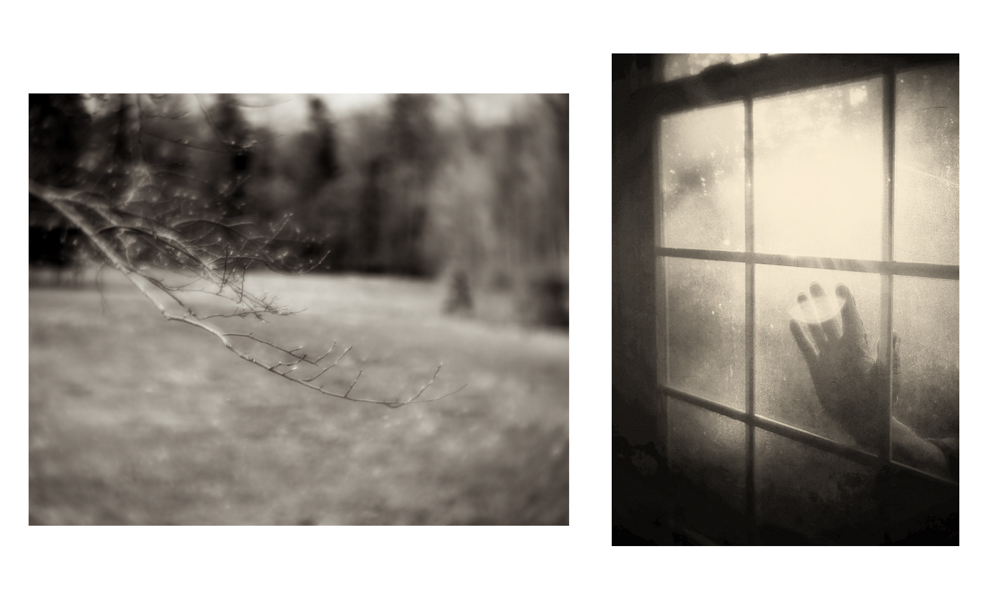 they say there is safety in numbers,

that numbers are where courage thrives,

and there that shelter exists. that the whole protects the one.

not unlike the steady warmth of your single gaze.

the two trees that arch over the path in the woods,

the hundreds of starlings at dusk over the skies of planted fields,

are where my safety is found.

STK: It’s crazy for me to think that when we started all of this of course there was no pandemic or lockdown! We just wanted to find a way to stay connected and be inspired by one another. However once we got the idea of the diptychs the project really took off. It was a way to have a visual conversation between two artists who seek to support, inspire and push each other. The writing was a natural extension and a way to challenge ourselves further. We meet each week and discuss the images we have in mind, where we are with the writing, and how the latest pairing is resonating. And of course – our kids, dogs, families and everything in between! Once we were self-isolating the idea of a touchstone, that we are that for each other, really became a lifeline with all the stresses that were and are still going on. 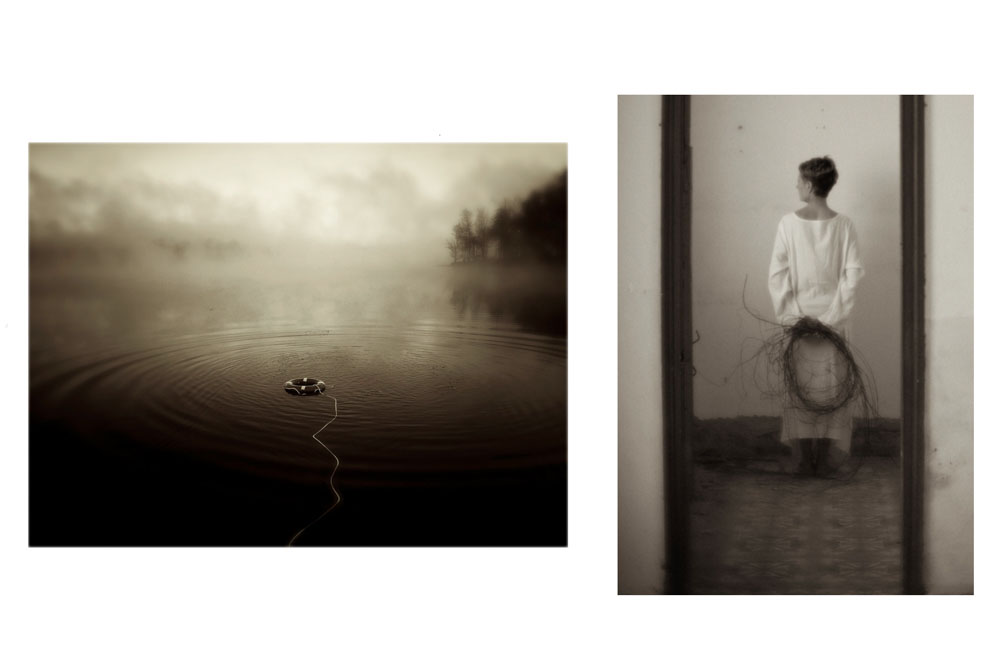 I’ll throw for you
a tethered ring
to help you
keep your head
above
the surface.

I’ll you hold fast,
and not sink slow
to where the weeds
pull at your ankles and
the selkie’s song
seduces you
to stay too long.  (…)

DS: Yes, I think our weekly “everything in between” conversations have really helped me give voice to the pairings and the poetry in a deeper way. Not only do I look forward to our talks, but I have gained so much insight from Sal and learned so much from her through her generosity of spirit and the way she views the world. This has been the most challenging of years and I have been at times, consumed with the exhaustion that all of these changes bring, but I have relished the accountability that this project has brought with it. I may not get dressed or take a shower on any given day, but I will damn sure commit to my friend Sal and write a poem and make a diptych and that feels good. 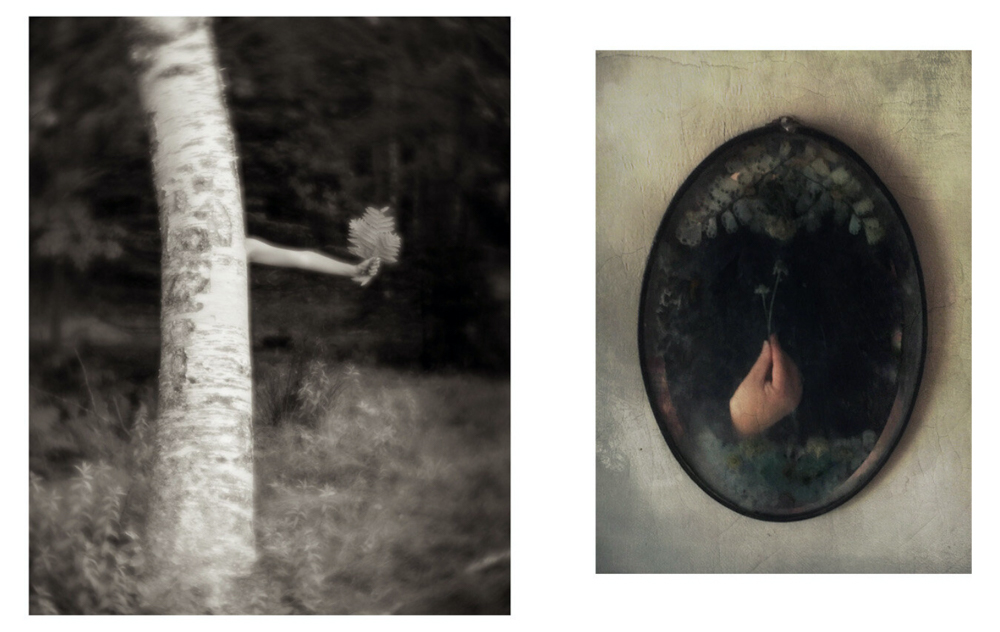 STK: I second that! It’s become a practice in and of itself that is sustaining us through this time. The work is constantly evolving, even though we are sharing the work on Instagram as we go, it is more a way to hold ourselves accountable, we try and stay open to the possibilities that the pairings present as we work together and the project moves forward. Eventually I could definitely see it in book form, the book is such a key expression for both of us in our work. I have made artist books and a couple of limited edition self-published volumes and I love the book form, as Dawn does too. When I am thinking about the pairings, I often think in that format, imagining the sequencing and rhythm of a book unfolding. There is an intimacy to both our work  that is very suited to the book format, inviting the viewer in, sharing our secrets. Whatever form this project takes and wherever it leads us, I am just so grateful to have the opportunity to work with someone so talented, who has also become a dear friend. 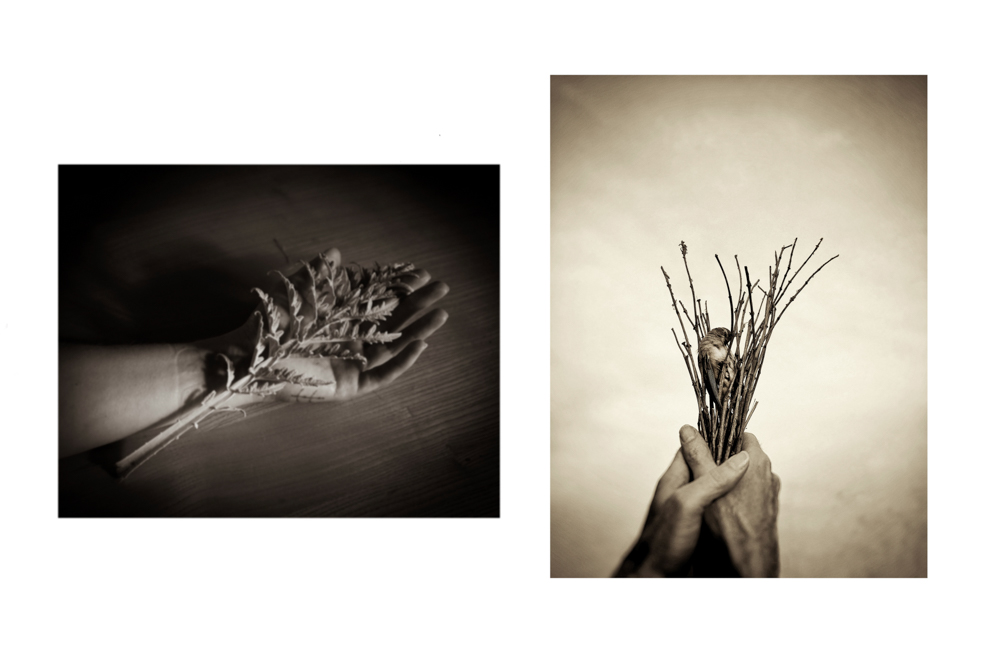 DS: I’m pretty sure I never want this project to end because it’s become so important to me, especially in making sense of this strange time. It’s given me the gift of reflection and has given me a sense of purpose and belonging. I feel this project will be shown in some form when we’re ready, either through book or show or both, but for right now, I can only focus on what it brings me in this moment which is my love of creative collaboration and our deep friendship.

NEXT | Kat Davis: How We Were, and Other Possibilities >
< Photographers on Photographers: Lorenzo Triburgo in conversation with Jasmine Murrell | PREV