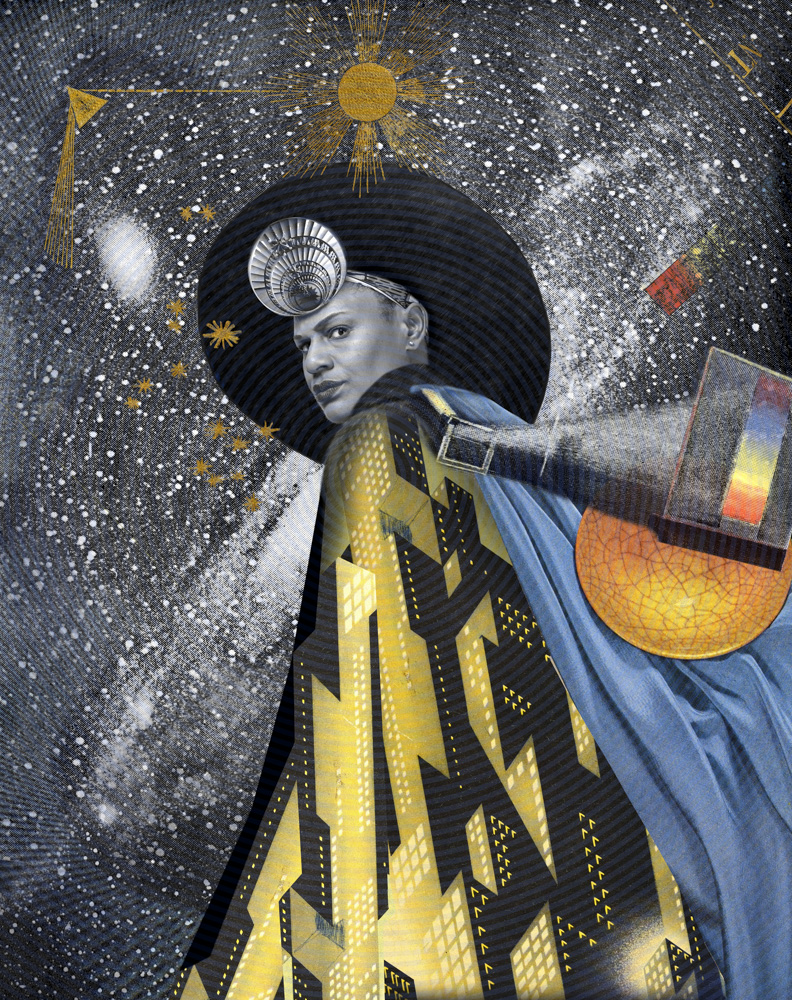 I have created a realm where forward-thinking women are in charge, and there’s a trap door to Earth if you get out of line.

Collage is a powerful art form that allows the artist to create new worlds and realities. Using her legacy of considering the photographic image, artist Paula Gillen has constructed a feminist utopia in outer space for her new series, Superpower Women in Space. Combining in camera portraits with NASA and vintage images, op art, and fashion, she conjures up her own set of feminine Superheroes that might just secretly work for our new Vice-President-elect.  Gillen also considers her constructions to be psychological objects as she states, “I am fascinated by the way media images communicate taste, ideology and how they reinforce social values.” Her work celebrates all women, those who are dominating with unapologetic dopeness and others who are still struggling with time-worn definitions of the female persona, no matter what planet they inhabit.

Gillen recently closed the exhibition, Head Trip, at Ten Nineteen New Orleans and you can read more about her work and process in an interview with Wendy Vogel. Just for fun, read this terrific article by Michael Gentile that features Gillen’s photographs from the punk scene in Baltimore during the late-1970s to the early-1980s.

Paula Gillen is a visual artist born in New Haven, CT. Her practice is grounded in appropriation and photographic re-enactment, aligned with the work of feminists like Barbara Kruger, Martha Rosler and Cindy Sherman. Unlike many artists associated with the Pictures Generation, however, Gillen approaches subjects such as gender oppression, racial strife, crime and politics with funky sets, saturated color schemes and a punchy wit.

Gillen received a BFA from the Maryland Institute, College of Art, and an MFA from the School of the Art Institute of Chicago in Photography. After graduate school, Gillen then pursued a career as a photo researcher and editor in New York for two decades, a background that informs her work today.

She has exhibited widely, including solo exhibitions at the National Center for Atmospheric Research, The Griffin Museum, and the Ten-Nineteen Gallery in New Orleans. Her work has been published in The Sleeve, 303 Magazine, Splice Today, Artscape and more. She lives and works in Boulder, Co.  IG: paulagillenart/ 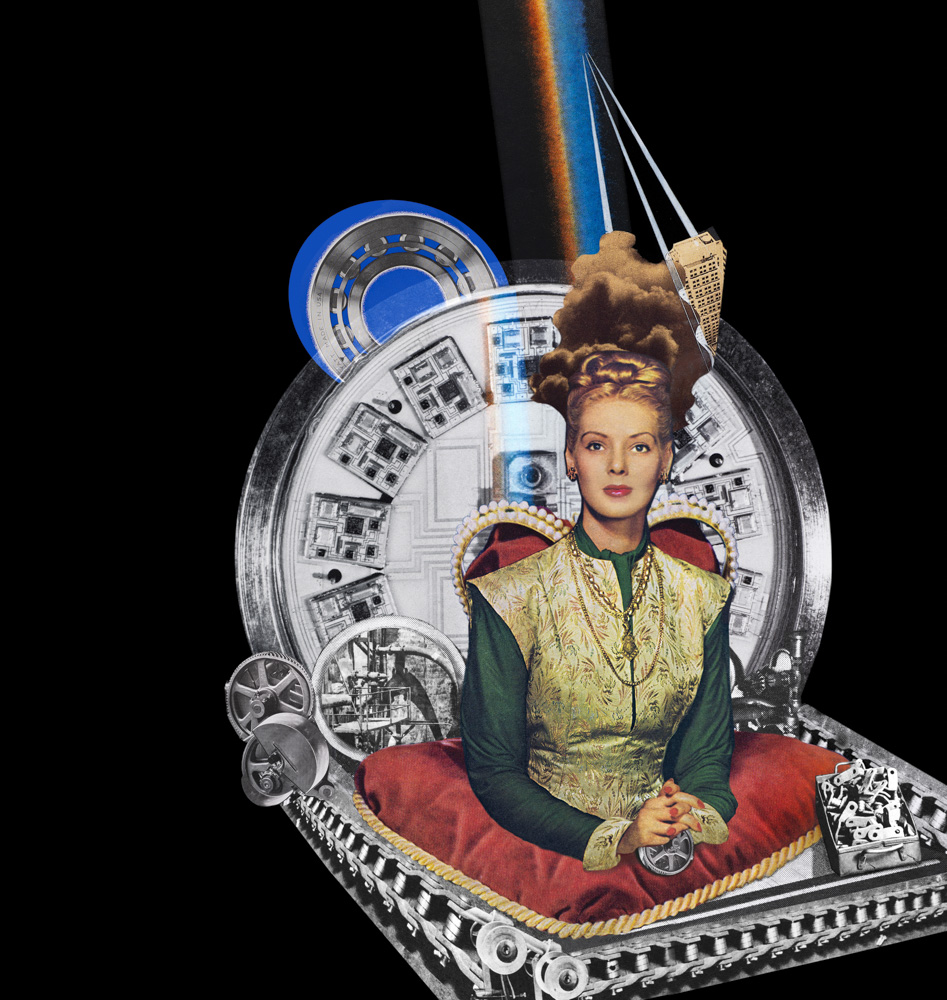 In the fall of 2018 after a working on my Roman Trumpe –l’oeil series for more than a year I was yearning to escape earthly issues and conflict and found some breathing room in space. In this new series, Superpower Women in Space which continues to today, my compositions are quite complex and more developed than anything I’ve attempted in the past. The women stand confident looking both fashionable and heroic and have a pumped up camp feel. Sometimes the women are placed within a surrealistic environment where both past and future elements collide. I choose space as the planets are not yet carved into political boundaries and its future is open ended. The question is who gets to colonize what. It’s a grab for resources and power always. Does the current political structure get repeated or does it get upended? Black women science fiction writers such as Octavia Butler and NK Jemisin have written about dominant narratives repeating in space but also about new worlds and possibilities for all women. Their stories allow us to escape, but at the same time they let us interpret the power structures on earth in new ways. In my works some of the images allude to women dominating and thriving in space, and other times the collages refer to the same problems that we’re having here on Earth.

I often start the process by photographing my friends as models in my studio. I carefully pose and light them to communicate strength and confidence. In my composition “Don’t Mess With My Superpowers” a futuristic Black women stares down at you and holds you in her gaze with dominance. In “Riding High Over the Oceans of Storms” the same women is a gatekeeper before the entrance to a bridge and it looks like there will be a hefty toll if you want to cross. Sometimes the compositional narrative obliquely references a pun on the word “space” such as in “Domestic Space” where we find a suburban woman facing the endless task of vacuuming dust on Mars. Blending NASA and vintage images, op art, and fashion along with my own original photographs I have created a realm where forward-thinking women are in charge, and there’s a trap door to Earth if you get out of line. – Paula Gillen October 2020 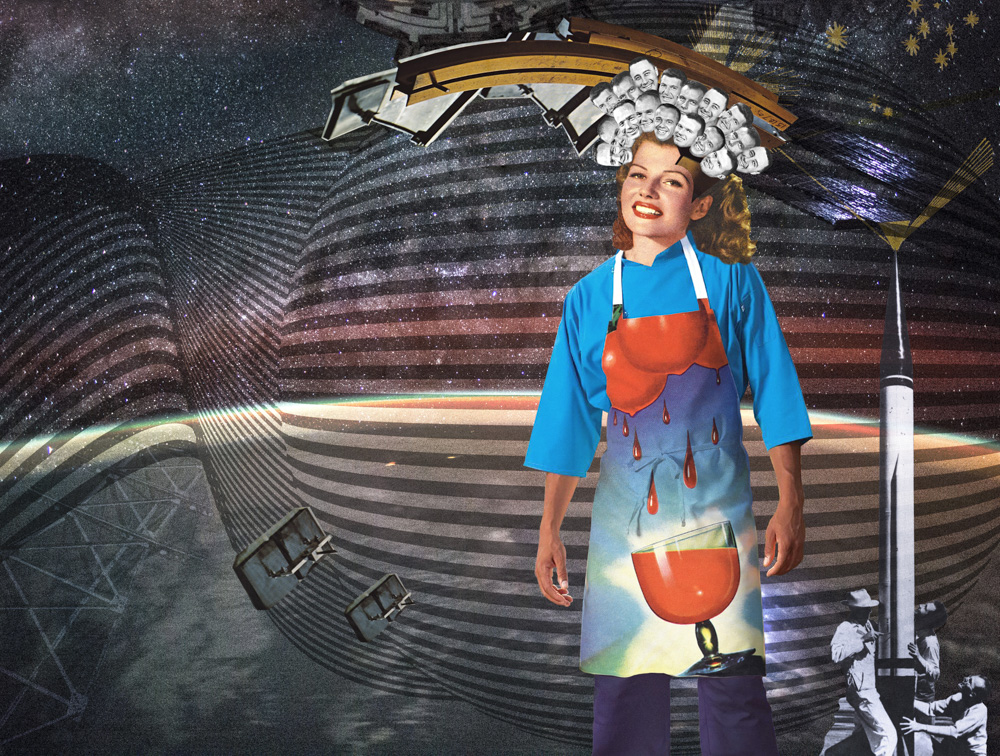 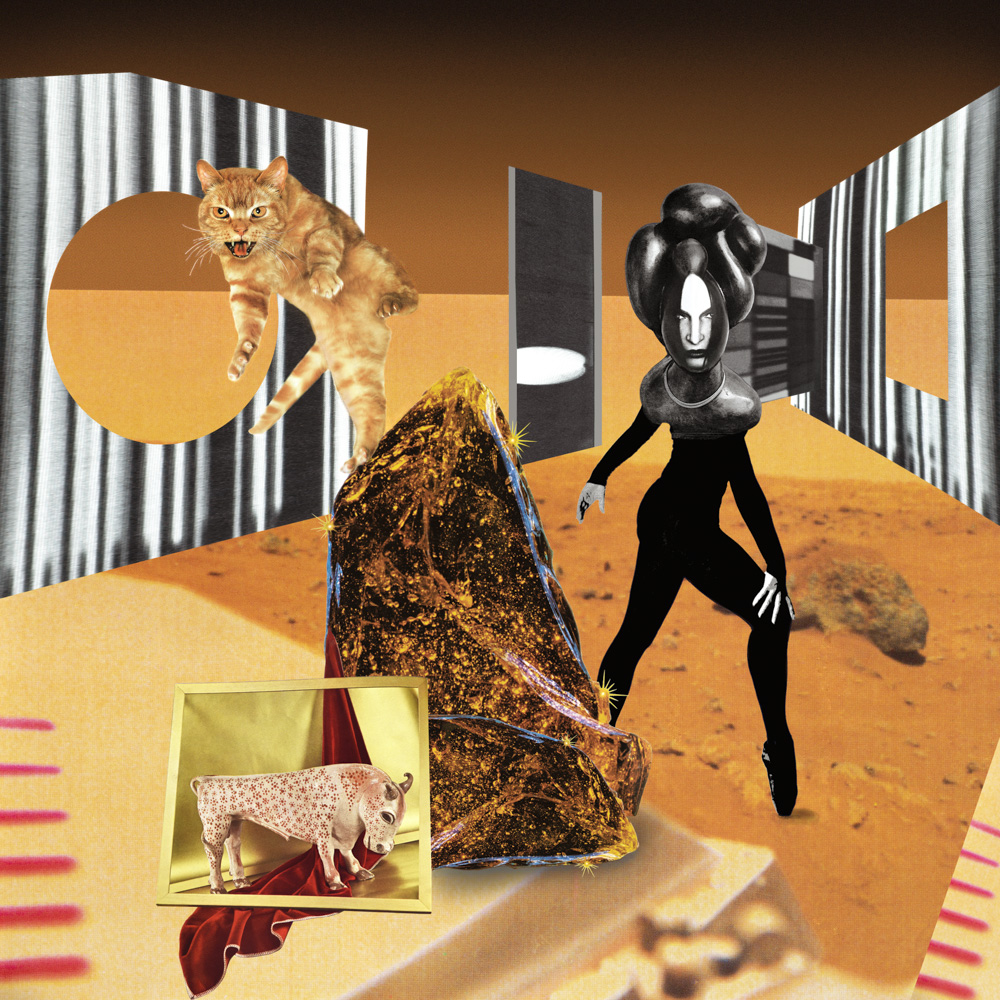 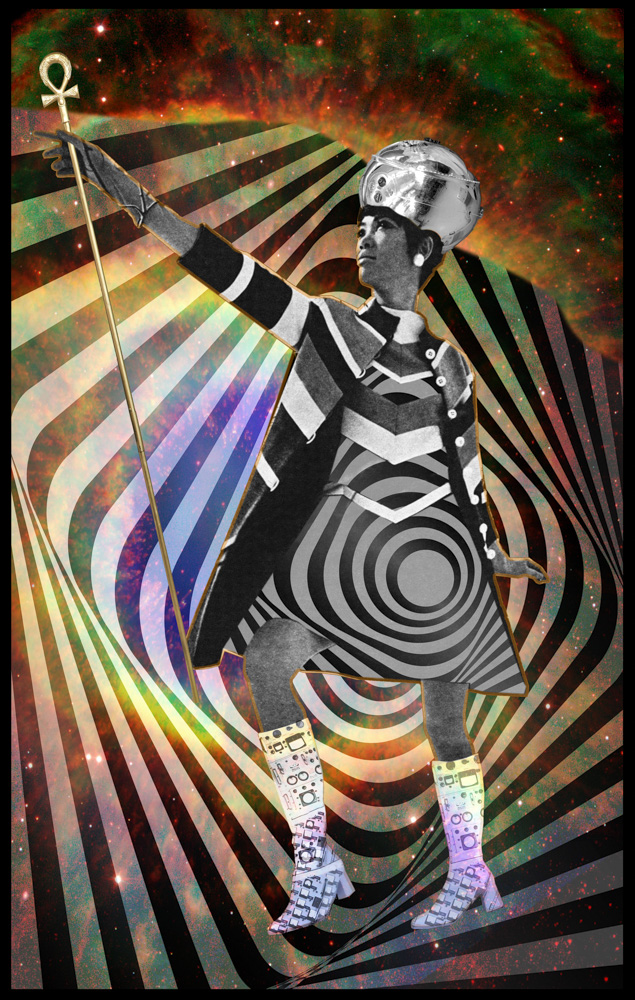 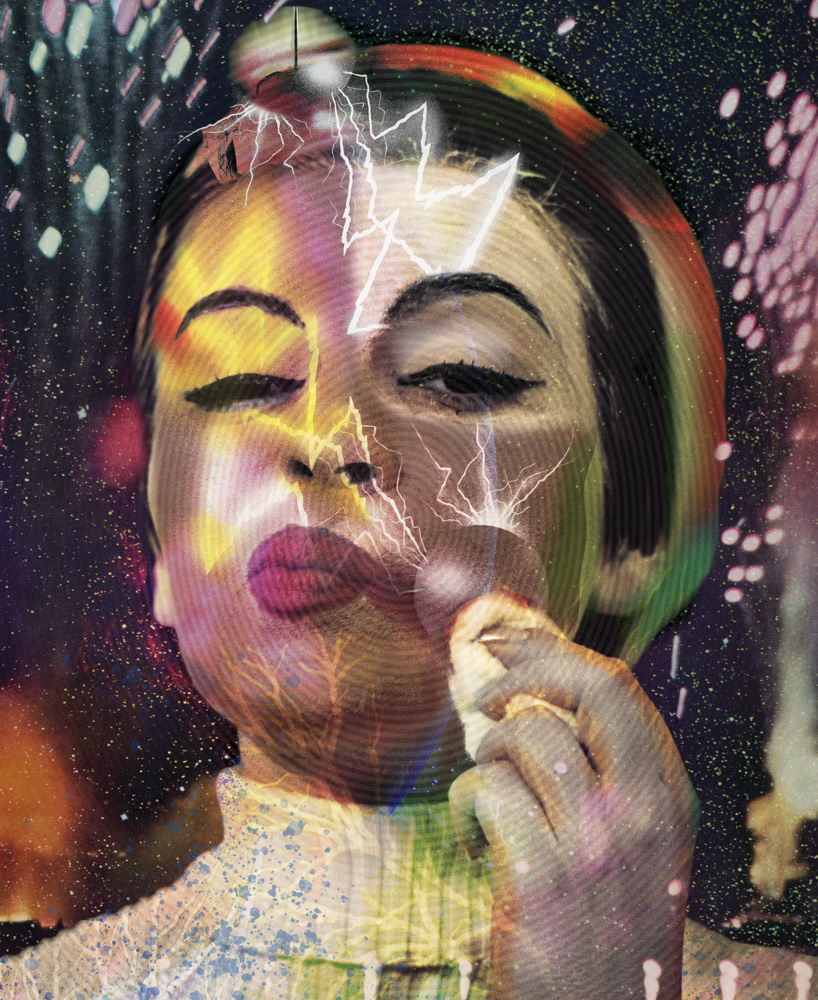 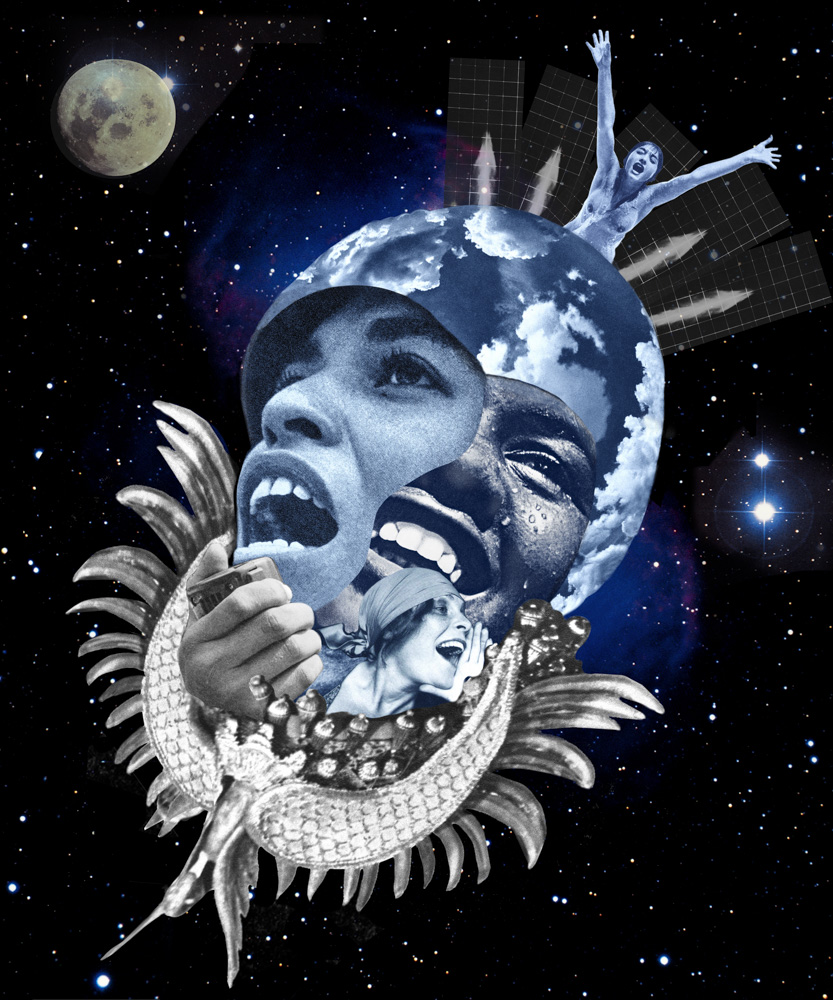 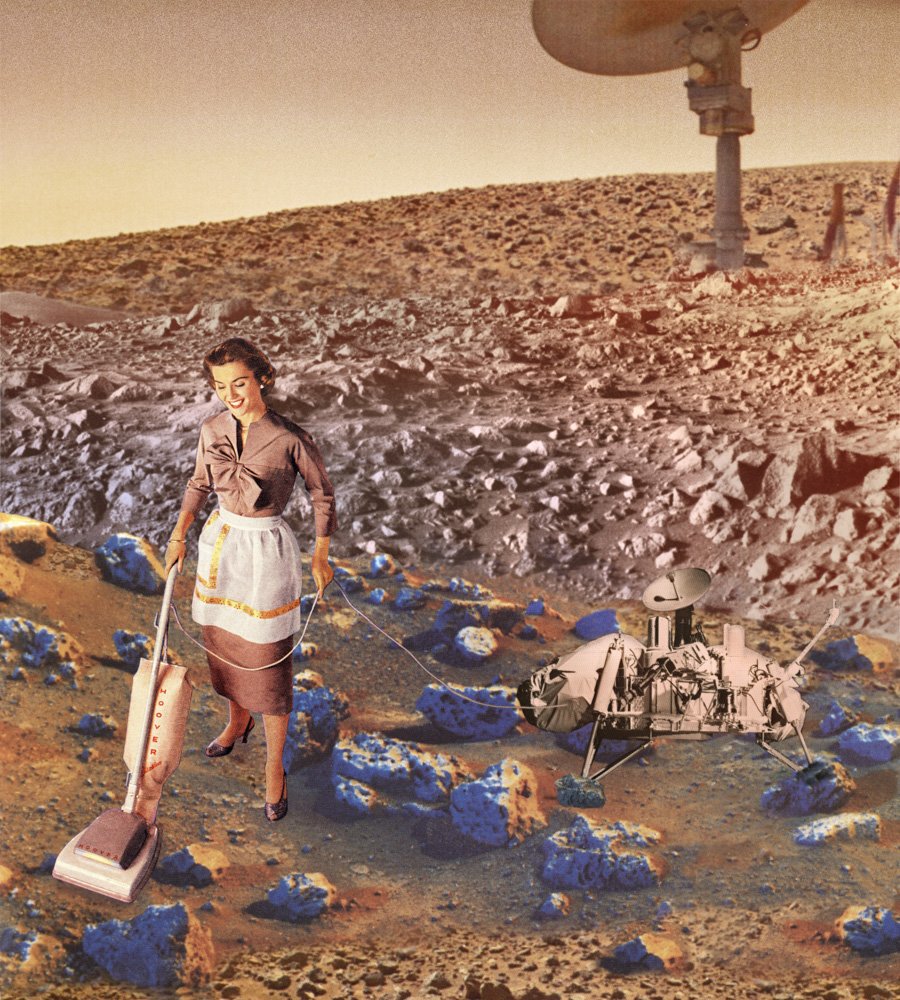 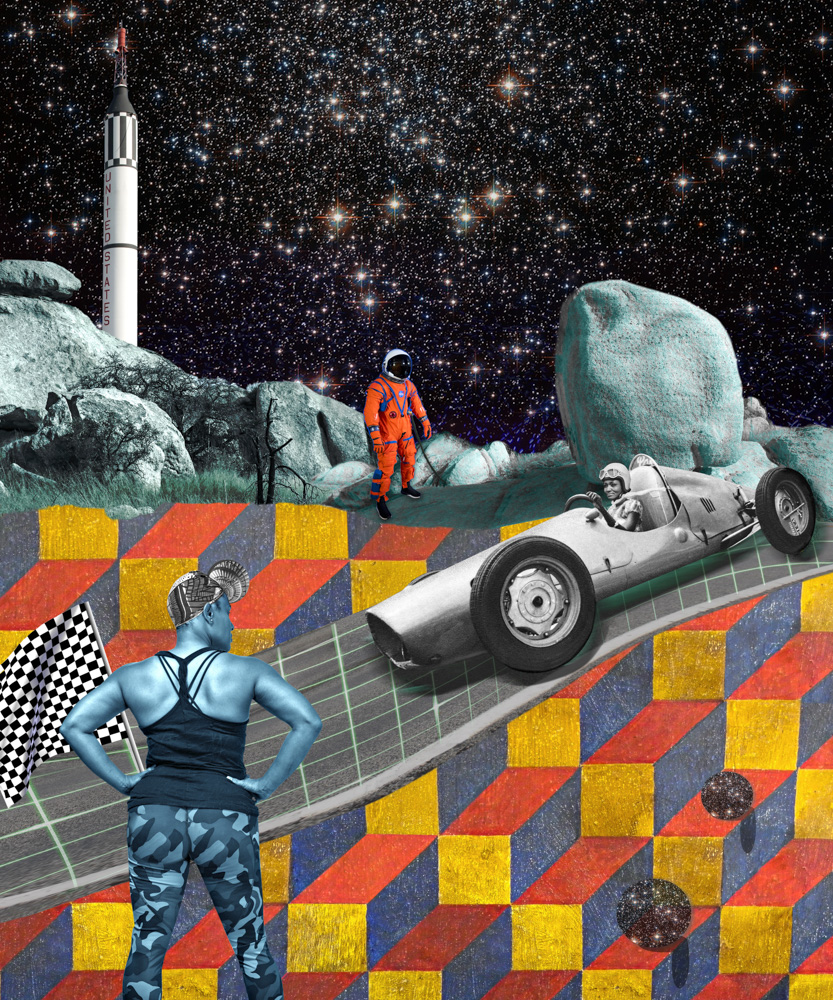 ©Paula Gillen, I’ve Got Your Back 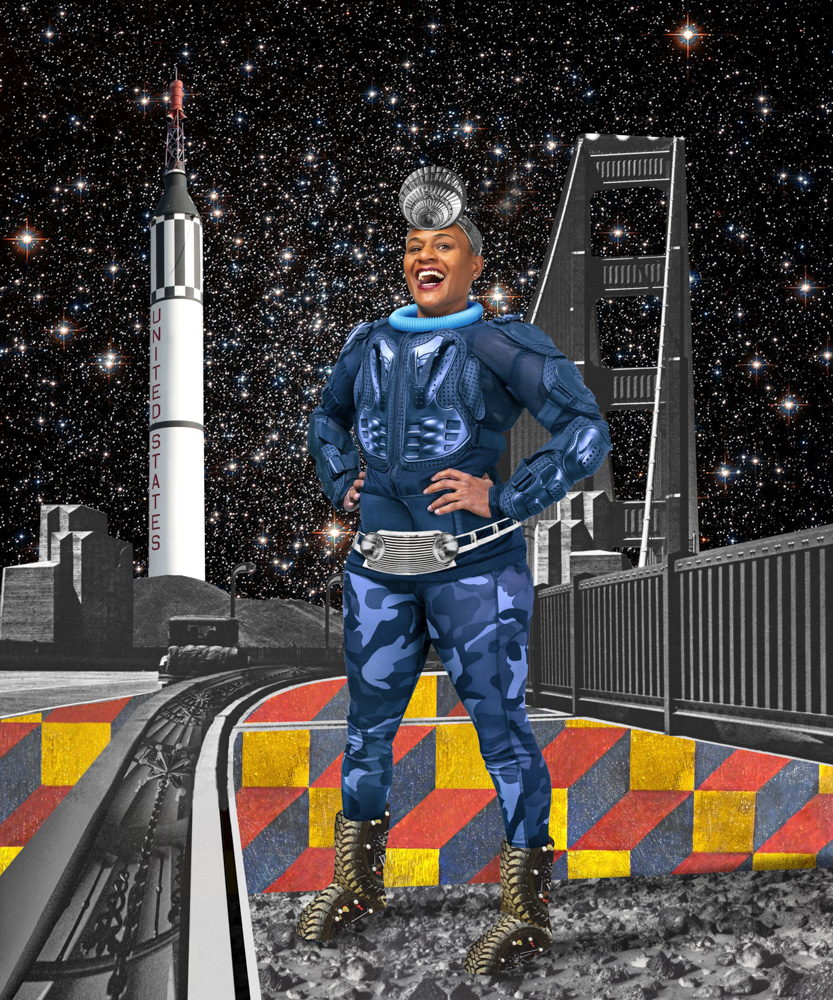 ©Paula Gillen, Riding High Over the Ocean of Storms 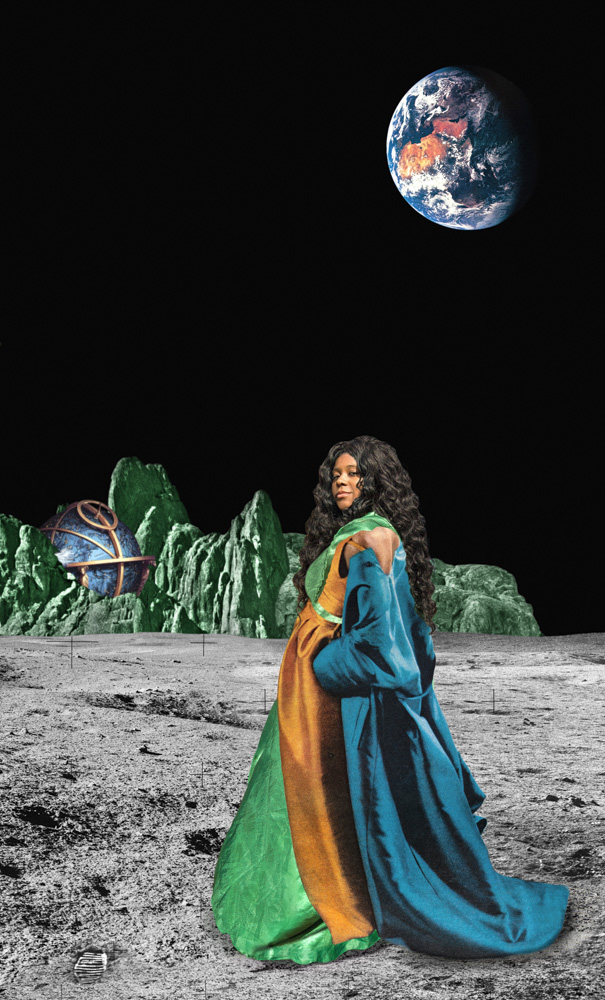 ©Paula Gillen, Adama on the Moon 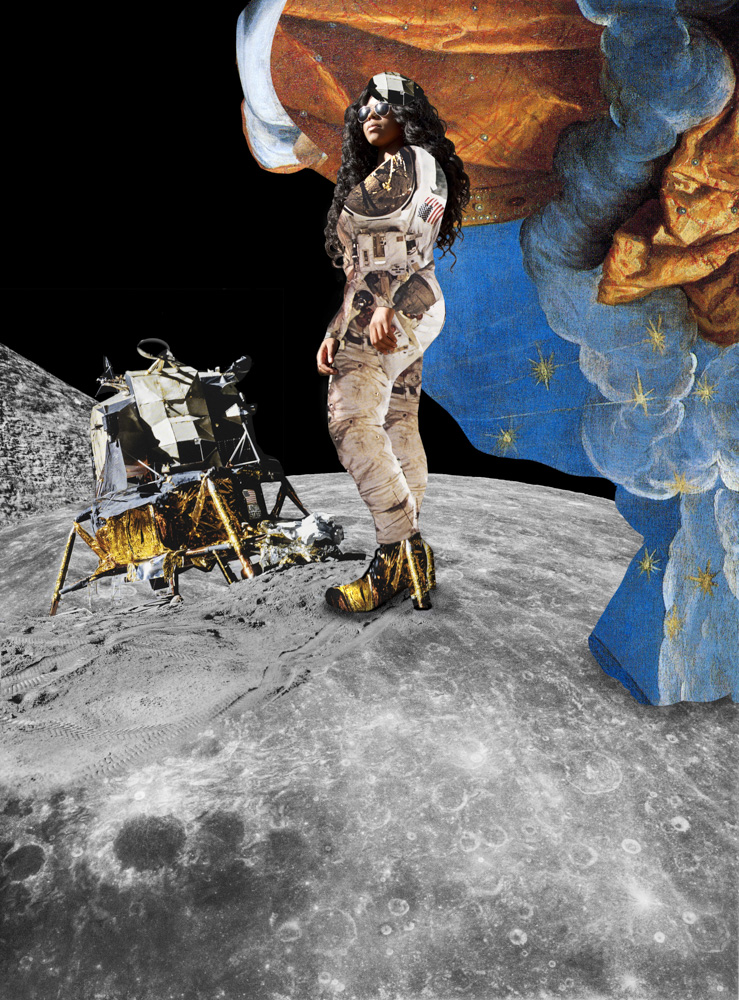 ©Paula Gillen, Exploring the Origin of the Milky Way 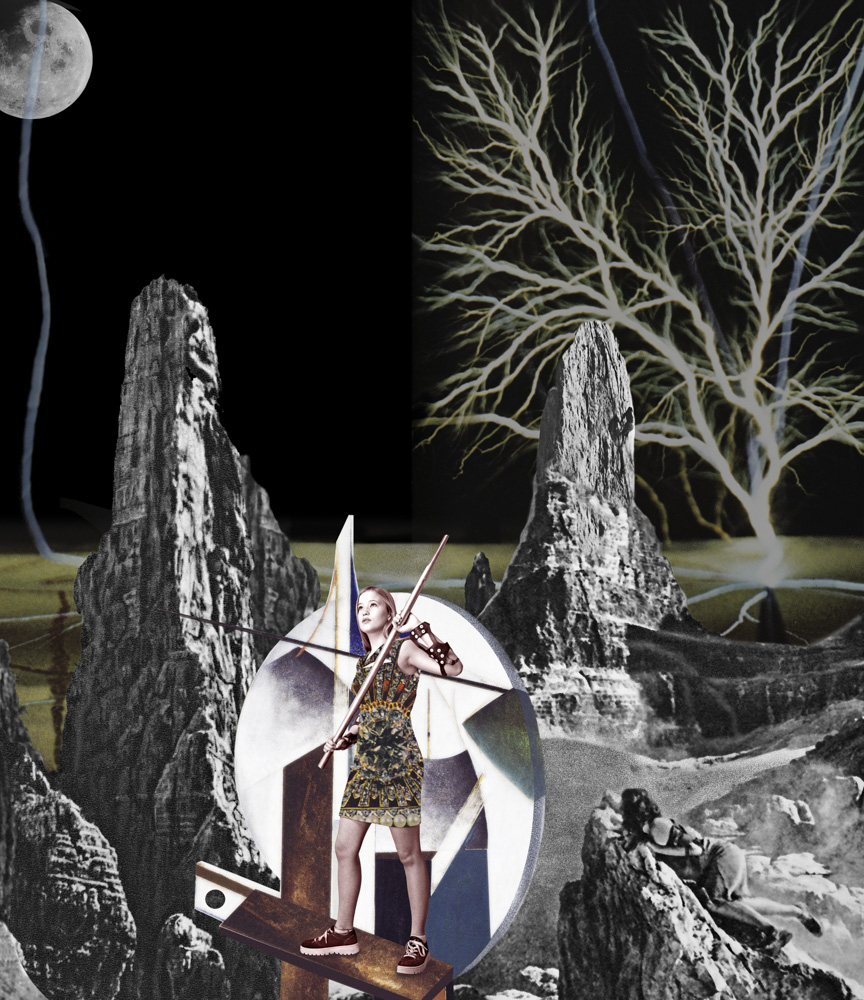 ©Paula Gillen, She’s Got a Platform 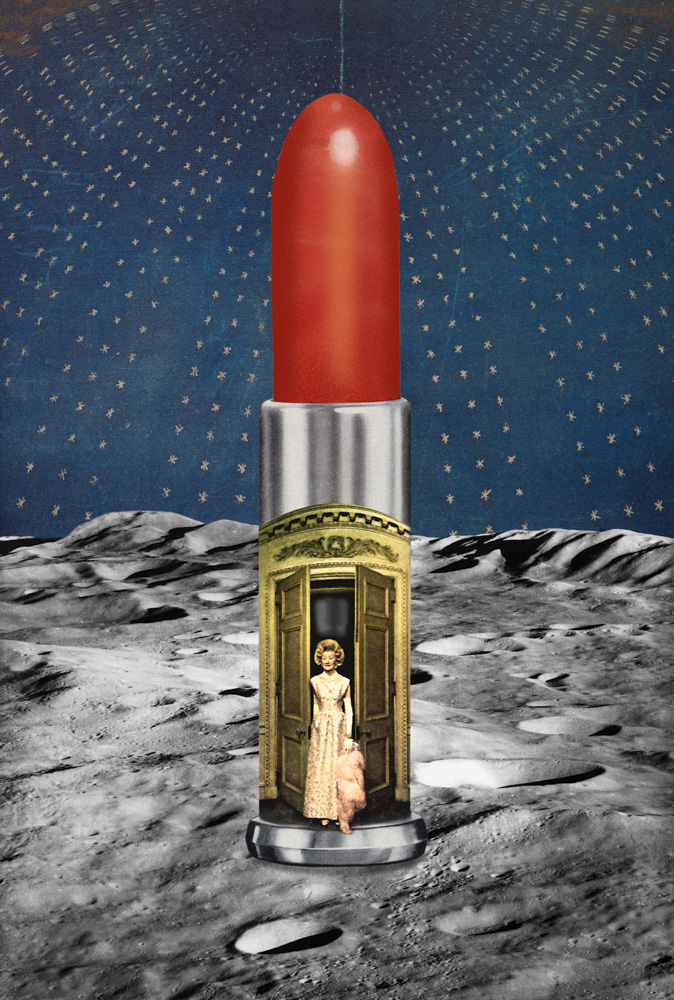 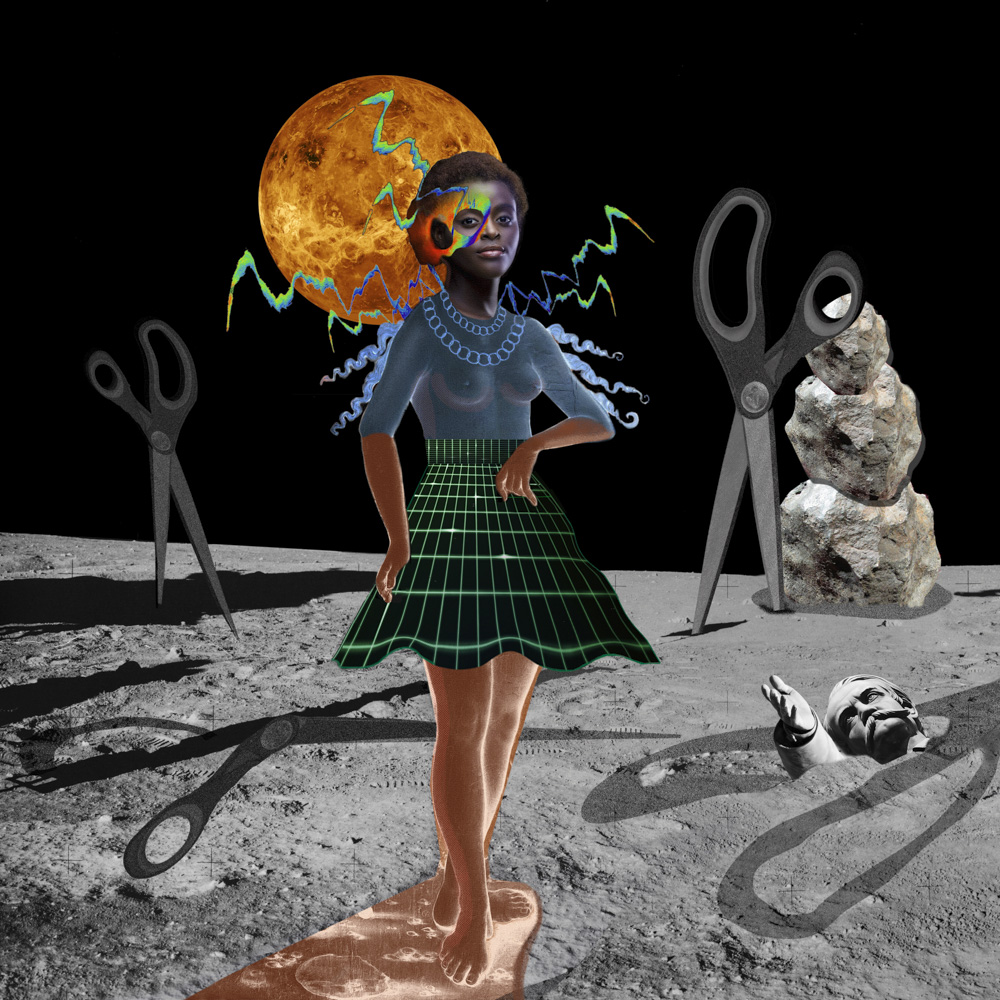 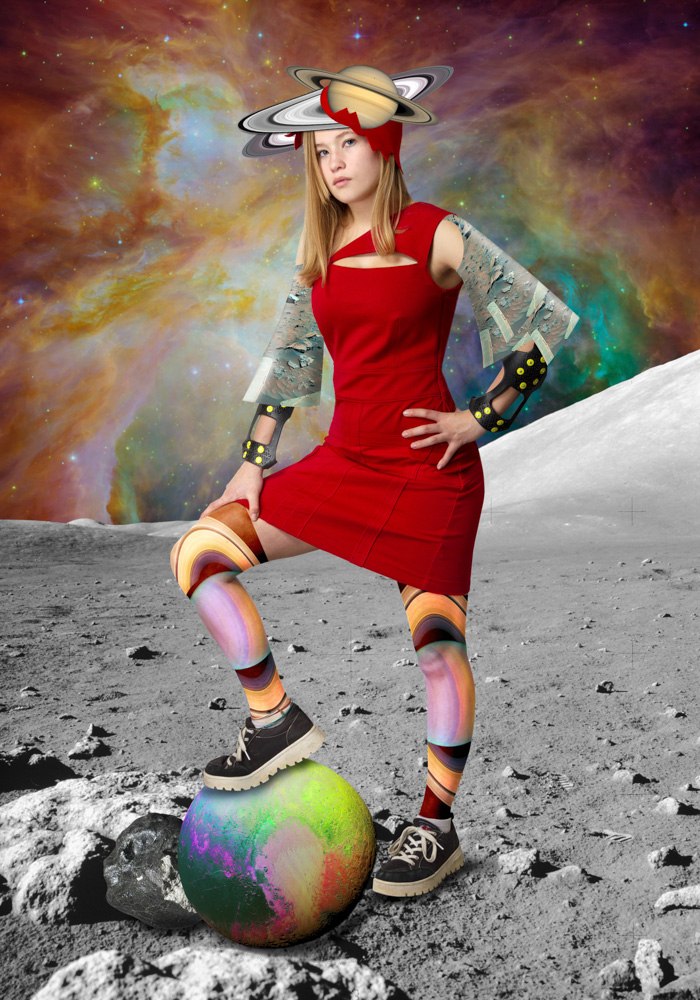