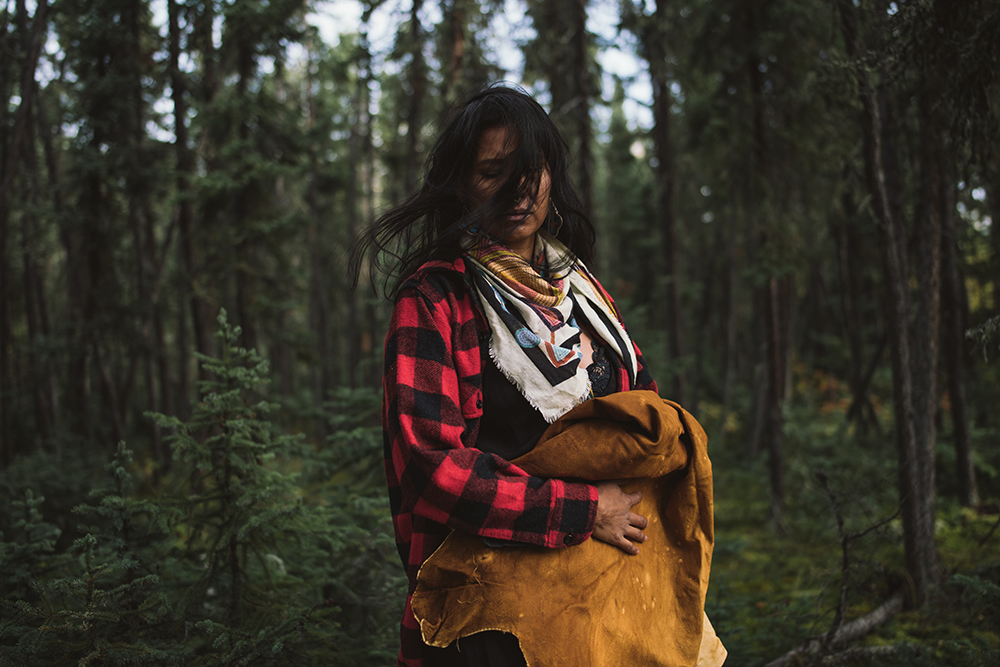 ©Pat Kane, Melaw Nakehk’o is a moosehide tanner, an artist, a filmmaker and mother. “Through the process of reclaiming my cultural knowledge, I saw how the many teachings woven into our land practices could positively impact our first nation communities. Our Dene protocols and laws govern our reciprocal relationship with the land and animals. Moosehide tanning is a foundational Indigenous art form, it was our homes, our transportation, our clothes and in hard times our sustenance. It is the canvas of our visual cultural identity. The smoke smell triggers memories of grandmothers, the sound of scraping reminds us of our aunties working together, the beadwork and style of our moccasins represent our nations. Hide tanning is a revolutionary act of resistance. We occupy our traditional land, we are adhering to our traditional teachings and honoring our relationship with the animals that sustain us. Moosehide Tanning is Land Back”.

The project, Here Is Where We Shall Stay by Pat Kane focuses on how Indigenous people in my region are moving towards meaningful self determination by resetting the past. The act of reclaiming culture and identity is ongoing, and my friends here are resilient in a place where symbols and systems of colonization loom large. We can hear colonization when Dene families pray to the Virgin Mary, but we see Indigenization when a young woman holds the hide of a caribou in her arms. In Catholicism we are Children of God, but in the Dene worldview we are One with the Land.

Pat Kane was nominated for this year’s celebration of Indigenous artists by Kiliii Yuyan (IG:@kiliiiyuyan) 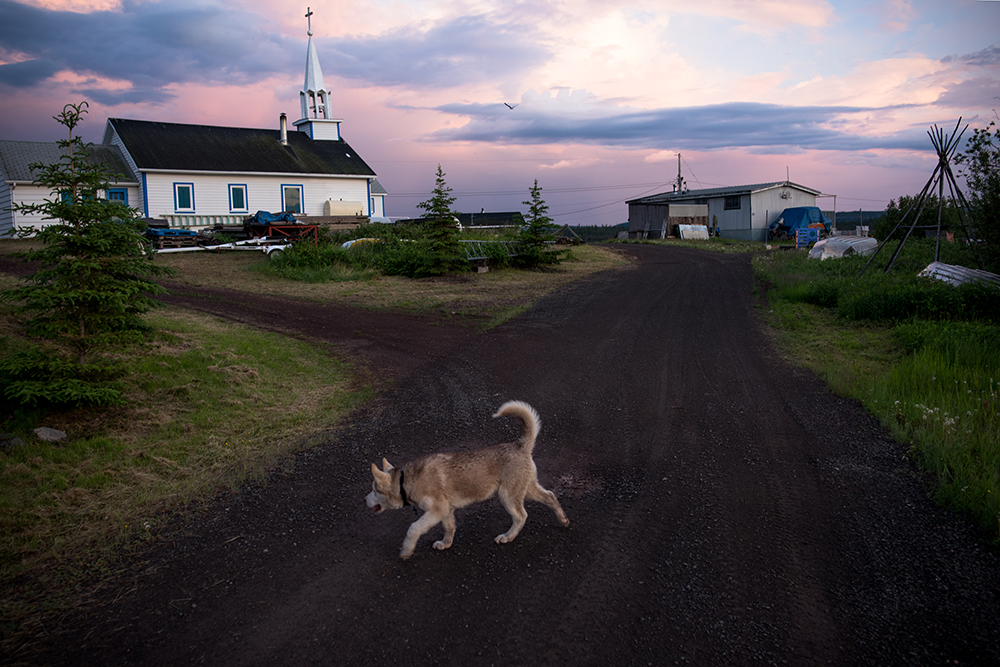 © Pat Kane, A dog walks near the Catholic Church of the Holy Family in Łutsël K’é, Northwest Territories. The church was built near the present day settlement in 19XX and moved to its current location at the tip of the penninsula – one of the tallest and most recognizable structures in the community.

HERE IS WHERE WE SHALL STAY

For generations, Indigenous people in Canada have lived under the laws and values of European settlers through forced assimilation. The introduction of residential schools, formed by the federal government and instituted by the Catholic and Anglican Church, pulled Indigenous children away from their lands, families, languages and identities.

The goal was to bring “civilization to the savage people who could never civilize themselves” (Truth and Reconciliation Commission of Canada, Final Report, 2015).

This project focuses on how Indigenous people in the Northwest Territories of Northern Canada are moving towards meaningful self-determination by resetting the past. The act of reclaiming culture and identity is ongoing, and my friends here are resilient in a place where symbols and systems of colonization loom large. We can hear colonization when Dene families pray to the Virgin Mary, but we see Indigenization when a young woman holds the hide of a caribou in her arms. In Catholicism we are Children of God, but in the Dene worldview we are One with the Land.

There is a tragic and complex tension between the way of the church and the way of the ancestors. While it may be impossible to break free of the colonizers, the subtle, defiant and beautiful acts of resistance gives strength to say “we are still here; here is where we shall stay”.

The title of this project is from the final story of “The Book of Dene”, a collection of parables from various Indigenous groups in Northern Canada. In the legend titled, “The Two Brothers”, two young siblings sneak away in a canoe and become lost. They travel west, south and east, visiting many different lands but suffering tremendous hardships. Some of the people they meet ridicule and take advantage of them. After many years, they make their way to the North and are welcomed and fed and clothed by the people there. One brother says to the other, “Here is where we shall stay”. An elderly couple asks who they are and the brothers tell their incredible story. It is revealed that these are the boy’s parents, and they are finally reunited as a family in their homeland. – Pat Kane

This project was created for the World Press Photo 2020 Joop Swart Masterclass. 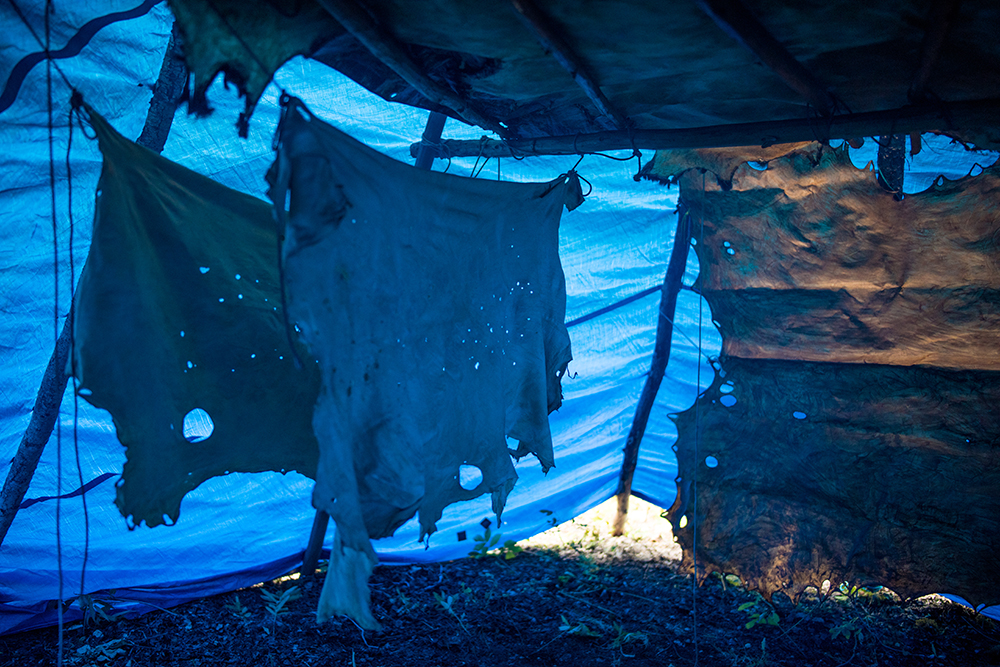 ©Pat Kane, Moose hides dry and are tanned by the smoke inside a tipi near Lı́ı́dlı̨ı̨ Kų́ę́. Moose hide tanning is a traditional way to make clothing, instruments, tools and art. Many younger people in the Northwest Territories are relearning moosehide tanning as a way to Indiginize and carry the tradition forward. “It’s more than tanning moose hide,” says Tania Larsson and artist and advocate for Indigneous practices. “Just by being in the bush with other people, away from the city and making our camp and cooking on the fire and sharing knowledge, we are living our traditional life. It is very holistic, natural approach to living.” 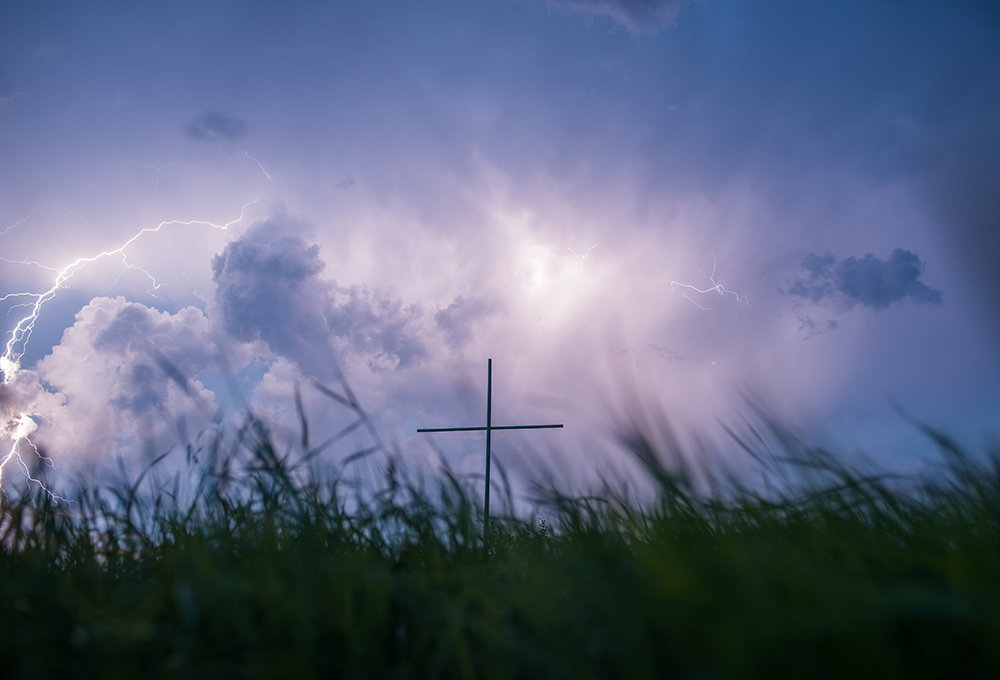 ©Pat Kane, In 1987, Pope John Paul II visited the small community of Łı́ı́dlı̨́ı̨́ Kų́ę́, a home to Dene people for thousands of years. It became a fort under the control of the Hudson’s Bay company in the early 1800’s and given the anglicized name Fort Simpson after the George Simpson, the governor of Rupert’s Land. Here, at the ehdaa (a point of flat land) Pope John Paul II wore a caribou hide robe and held mass for nearly 4,000 people. He publicly advocated for Indigenous rights but encouraged Indigenous people to join the Church and follow catholicism. Despite repeated invitations by Indigenous people for the Roman Catholic Church to publicly apologize for their role in the residential school system, they have not. John Paul II was the first and last pope to visit Canada’s North. 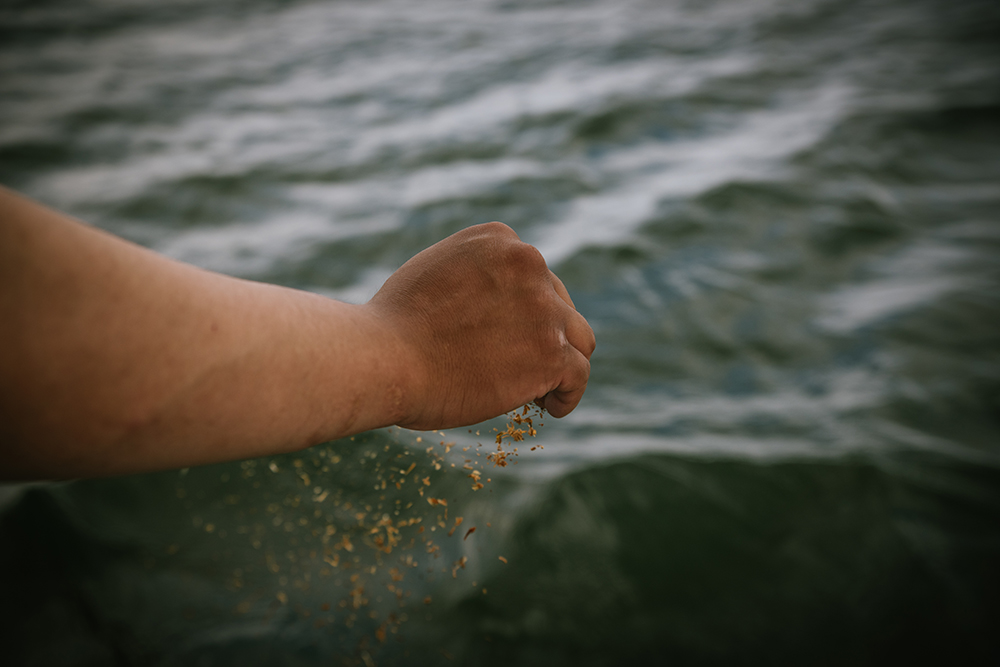 ©Pat Kane, Chase Lockhart makes an offering of tobacco, a way to show respect to the water and pray for safe travels upon it. 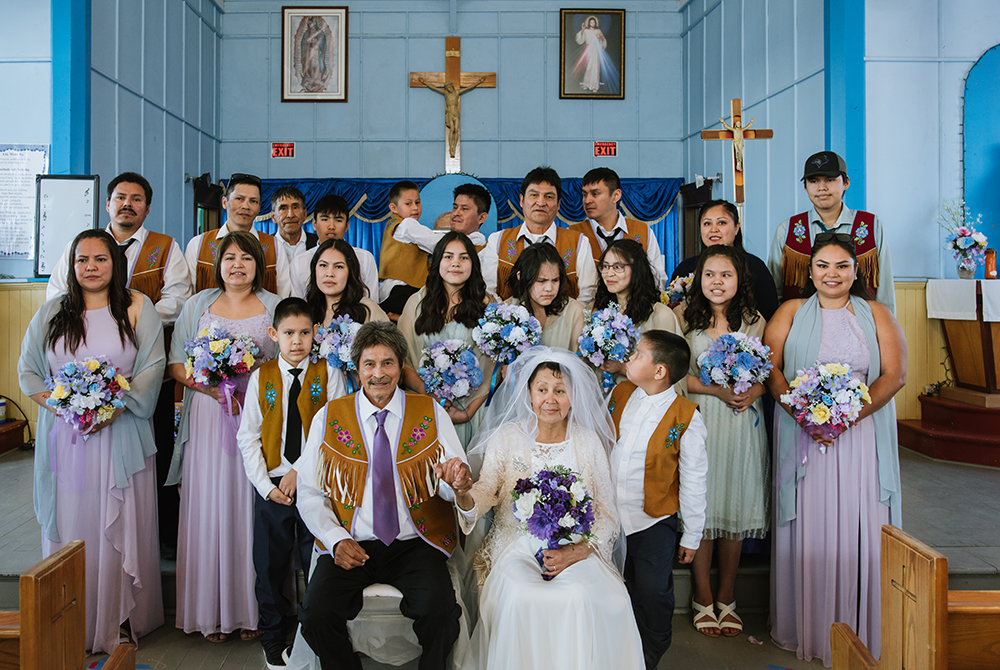 ©Pat Kane, After thirty-nine years as a couple, John Doctor, 65, and Pauline Zoe, 58, get married in St. Micheal’s Catholic Church in the Tłı̨chǫ community of Behchokǫ̀. Doctor recently retired from the Rio Tinto owned Diavik Diamond Mine, one of three diamond mines operating in the Northwest Territories. “We have a family but I figured it was time to make it official. I’m glad she said yes.” 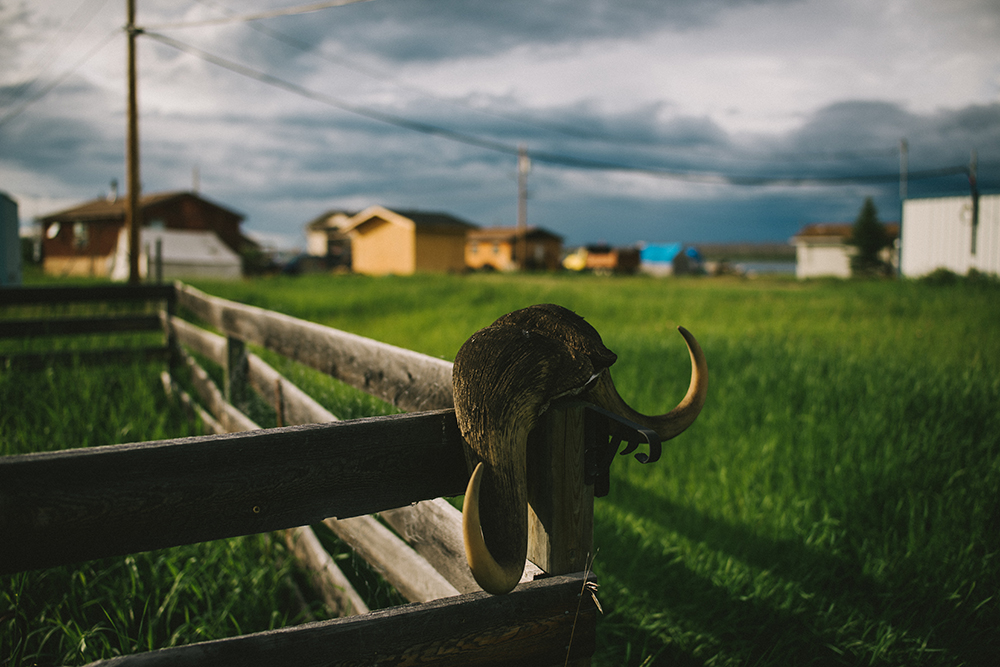 ©Pat Kane, The horns of a muskox, an ice-age mammal that still thrives in Canada’s far north, sits on a fence in the community of Jean Marie River, Northwest Territories. 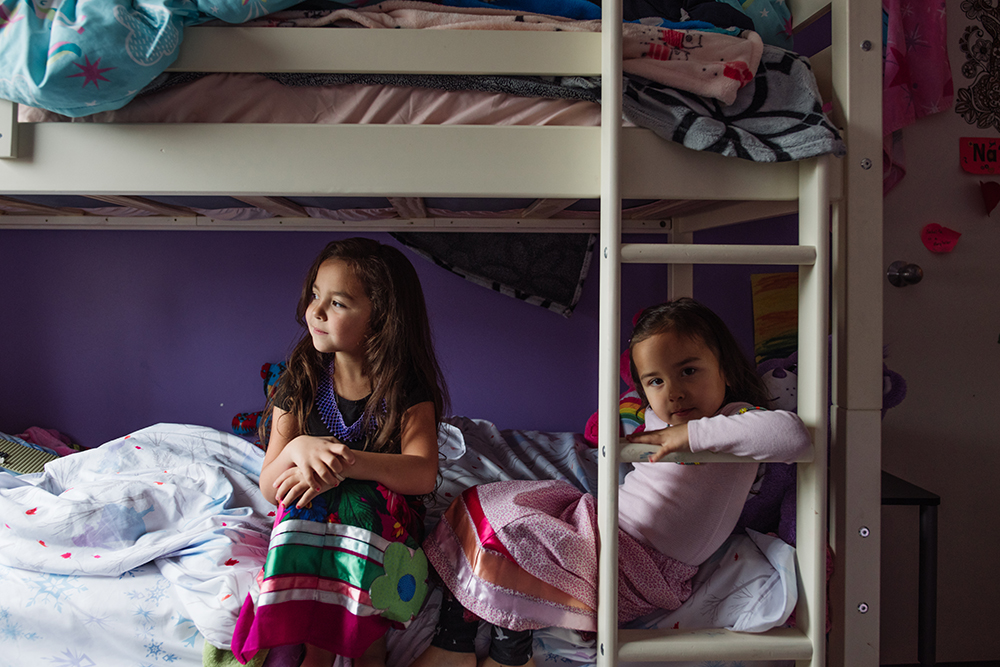 ©Pat Kane, Sahᾴí̜ʔᾳ and Náʔël Nóríyá in their bedroom in Somba K’e (Yellowknife). “Sahᾴí̜ʔᾳ remained unnamed for a month until we collaborated with my mom for Denesołįne words in our language”, says their mother, Shene Catholique-Valpy. “We chose Sahᾴí̜ʔᾳ, which means ‘when the sun is peaking through the clouds’. The day she was born I was waiting for her arrival and I could remember looking through the window and watching the sun peeking through the clouds on its way to setting for the night. Her name is meant for her. She is the sun that will always come through the gray clouds. A month after her birth, we applied for a birth certificate but were told they cannot support the glottal stop in her name. Náʔël Nóríyá was born in 2016. Náʔël is a word in my Denesołįne language used to describe when thousands of Caribou would cross the river during migration in our ancestral lands in Dácho Kúwe (Timber Bay). Nóríyá means “amazing”. We collaborated with my mom with her name as well. Her name is who she is and it was meant for her. She continues to hold herself up with so much strength and bravery like thousands of caribou. I am reclaiming traditional names because before colonization, we had names that were given to us and were meant for us. Our name is a piece of who we are and we carry that name which shapes who we are. It is our identity. In residential school and amidst colonization, they only gave them numbers to be called by. By reclaiming names, I am showing that we are still here”. 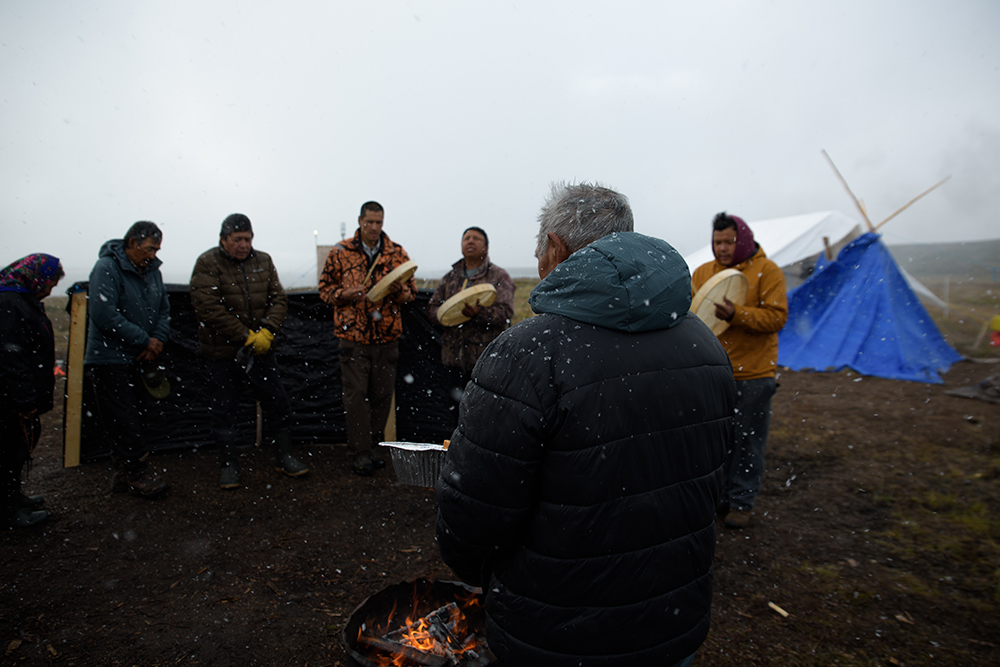 ©Pat Kane, Drummers pray and sing during a ceremony to “feed the fire” at Kokètì (Contwoyto Lake), Northwest Territories – a way to ask the land for safety and protection. 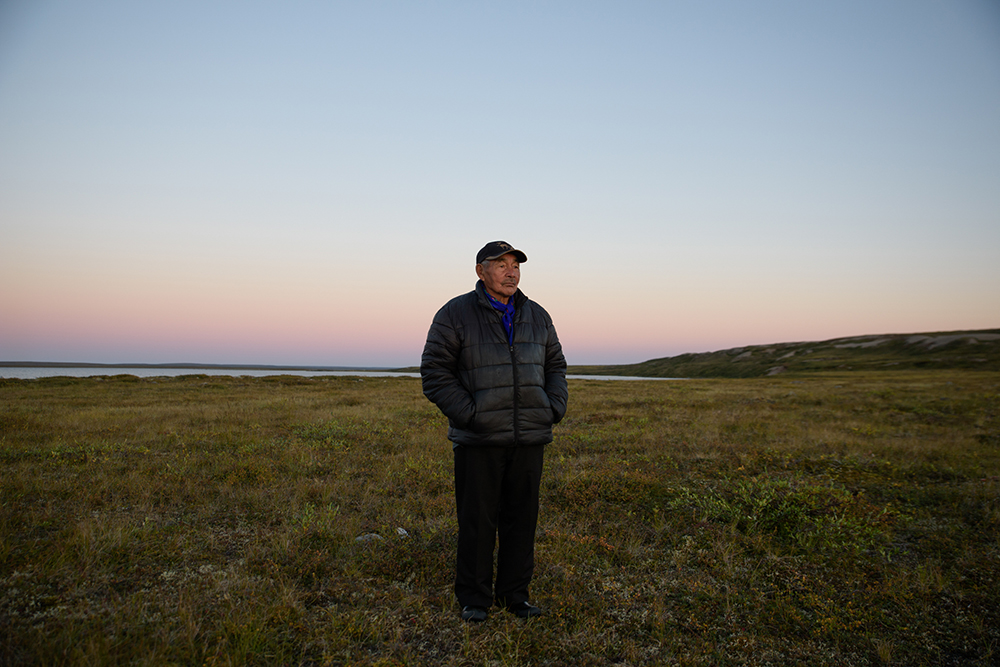 ©Pat Kane, Louis Zoe, an elder from Gamètì, Northwest Territories, watches the sun set over Kokètì (Contwoyto Lake), the calving grounds and migration route for the Bathurst caribou herd. In the 1980’s and ’90’s, the herd had a population of nearly half a million caribou but has declined to just under 10,000 today. Scientists say the decline may be from a combination of several factors: climate change, mining, increase in predators and over hunting. Zoe and several researchers from nearby communities, use a mix of traditional knowledge and western science to “do as hunters do” and study their migration patterns, the health of the land and water, signs of new predators and resource development – all in real time, on the ground and alongside the herd. 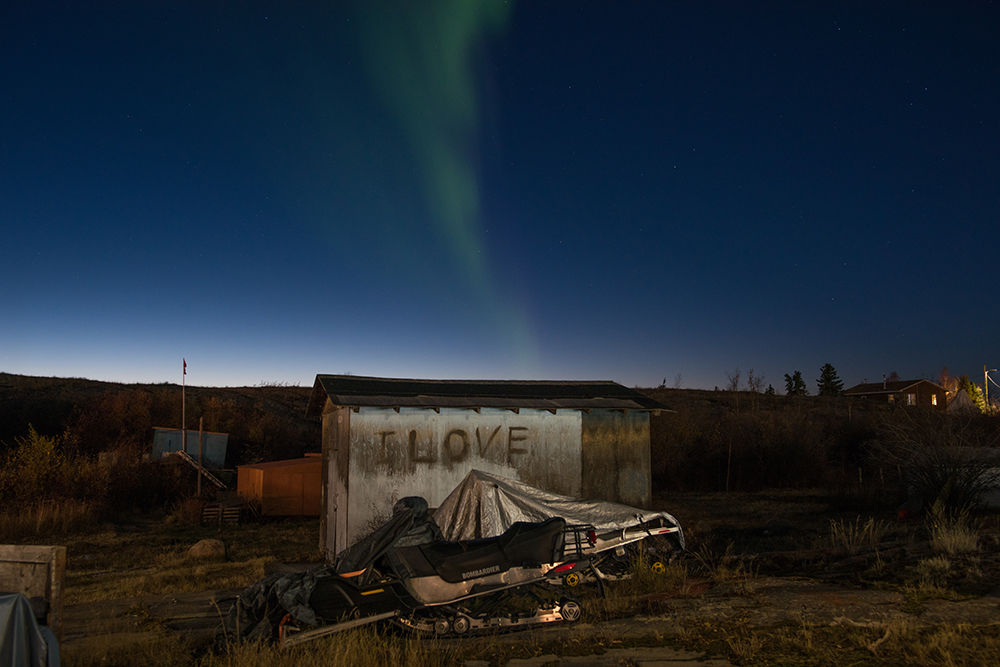 ©Pat Kane, The aurora borealis appears over a shed in the village of Dettah, Northwest Territories. 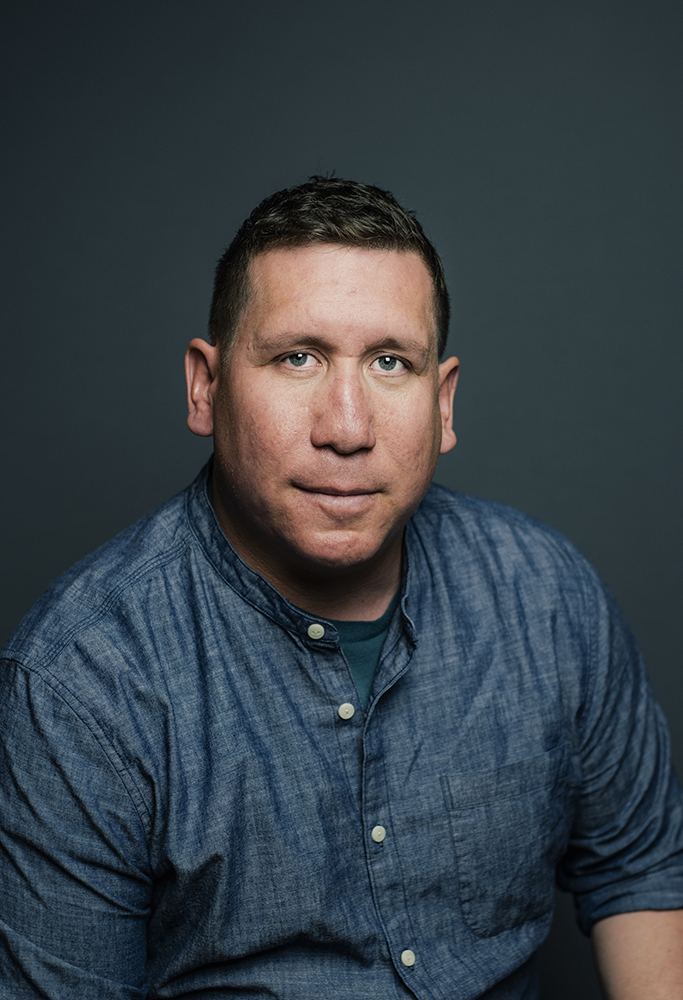 Pat Kane is a photographer in Yellowknife, Northwest Territories.

He takes a documentary approach to stories about people and life in Northern Canada with a special focus on issues important to Indigenous people, including the relationship between land and identity.

Pat is the co-founder and president of the Far North Photo Festival — a platform to help elevate the work of visual storytellers across the Arctic. He’s also a mentor with Room Up Front, which is a mentorship program for emerging BIPOC Canadian photojournalists.

Pat identifies as mixed Indigenous/settler and is a proud Algonquin Anishinaabe member of
the Timiskaming First Nation (Quebec).

His work has appeared in: National Geographic, The New York Times, The Atlantic,
Harper’s Magazine, World Press Photo among others. His photos have been exhibited at
Photoville (New York), Contact Photography Festival (Toronto) and Atlanta Celebrates
Photography (Atlanta).  Follow Pat on Instagram: @patkanephoto