Tira Khan: A Place I Never Knew by Aline SmithsonOctober 3, 2021 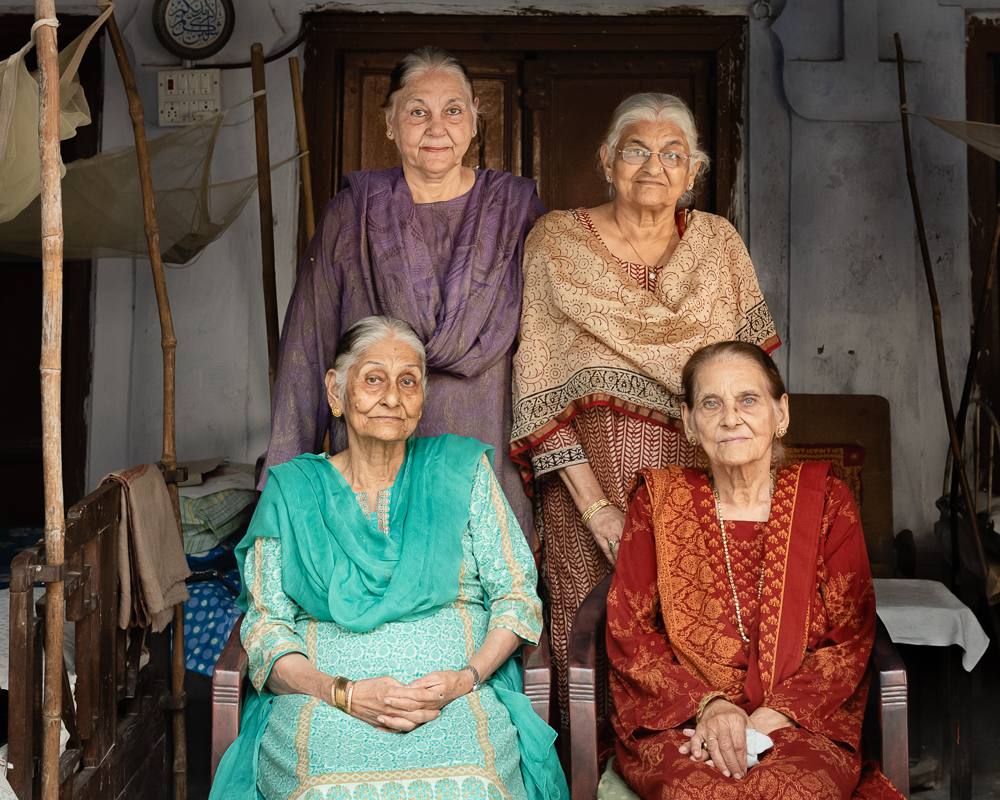 ©Tira Khan, This is Now

Photographer Tira Khan has recently opened the exhibition,  A Place I Never Knew, at the Griffin Museum’s satellite gallery Wincam that runs through November 29, 2021. This new body of work examines place, family, and memory, as Khan discovers her roots in a city unfamiliar. A brief interview with the artist follows.

Tira Khan’s photographs explore the meaning of family, the formal and informal moment, and the architecture of place. Her images are often personal, as she finds that elements of our daily lives often reflect universal themes.

Khan enjoys shooting straight from the camera, as well as pushing the bounds of what is a photograph. She finds documentary photography important as both art and historical record. She also explores layered imagery using monotype, polymer photogravure, and digital collage. Two of her series were finalists in Critical Mass, Photolucida’s national photography contest.

Kris Graves selected her images in the Photographic Resource Center’s 2021 Exposure exhibition. Khan has exhibited her work in galleries nationally and internationally, including this year’s Athens Photo Festival. Der Spiegel, Lenscratch, and Musee Magazine have featured her series in their online publications. In addition, her personal photographs have been published in The Boston Globe, and The New York Times Lens Blog.

Khan began her career as a writer, working as a staff reporter at daily newspapers; she has a soft spot for journalism. She has worked as an editorial photographer for Bloomberg Businessweek, The Washington Post, The Wall Street Journal, and The Seattle Times. You can follow Tira on Instagram: @tirakhan 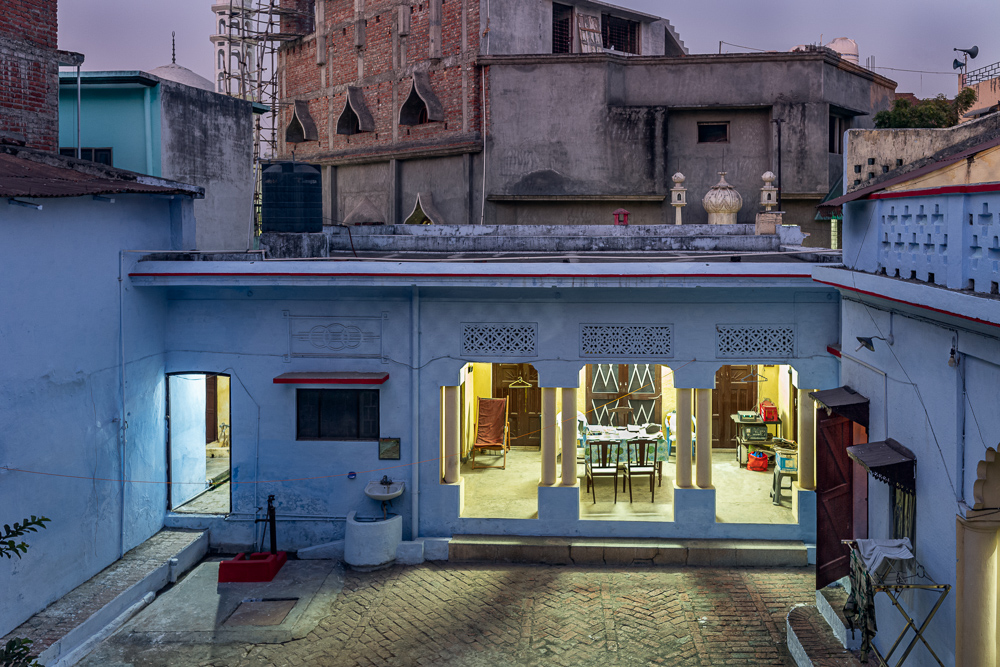 A Place I Never Knew

For this project, I traveled to one of the last Muslim-ruled princely states in India, also my family’s ancestral home. Rampur is a small city four hours north of Delhi that many Indians have never heard of. A well-constructed highway loops around the city, which means travelers on their way to more popular destinations need not stop. And why would they? The city has the highest Muslim population in Uttar Pradesh, India’s most populous and poorest state. According to the 2011 census, just half Rampur’s 2.3 million residents can read. The Times of India called it India’s “filthiest city.”

The city has seen better times. But it has also seen worse. Rampur’s former rulers, called Nawabs, constructed palaces, mosques, and a fort. The Nawabs valued culture: They hired chefs who created a courtly cuisine. They cultivated music, collected books, and listened to poetry. They also ruled with clenched fists, ready to punish those who dared defy them — and also those who did not. My grandfather, head physician to Nawab Raza Ali Khan, was sent to London to continue his medical studies. After a falling out with the Nawab, he was —for a time — told not to return.

My father was born and raised in London, and I was born and raised in Boston. For this project, I returned to India to discover a city, culture, and country that I never knew. My family’s ties to the city intrigued me. I visited my uncle, who still lives in the family home. I read early 20th century texts and learned that Pathans, my family’s ethnic lineage, were considered a warrior race, admired by Rudyard Kipling and Winston Churchill. By others, they were vilified. My photographs explore the city’s architecture, and play with the formality of Indian-style portraiture popular during the pre-world war era. This series looks at the city’s history, and also its present: During my visit, I observed a young parkour team who bridges this temporal divide doing flips atop crumbling palaces.

Recognizing the city’s history seems important now, as Muslims struggle under the shadow of Hindu nationalism. Here, Hindus and Muslims have always lived together peacefully — even when violence ripped through the country during Partition in 1947. While riots in Delhi can kill indiscriminately, this city, for the moment, remains quiet. 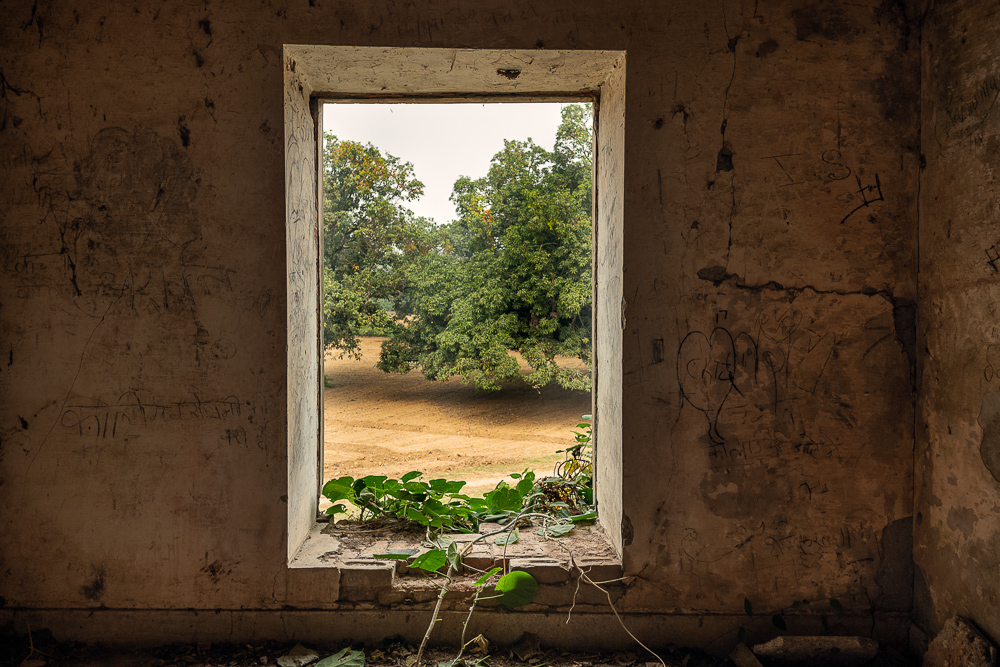 ©Tira Khan, Eye of the Palace

What drew you to make this journey to rediscover your family’s ancestral home at this moment in time?

I had always wanted to learn about my family’s connection to India, but life got in the way: It was a very long trip from Boston, I didn’t know many people there, and everyone told me I needed to spend at least three weeks in India if I was going to travel all the way there. Then I had three children, so I wasn’t going anywhere for a while.

In 2013, when my children were older, my father planned a family trip to India with the grandchildren.  I found it fascinating, and afterwards, wanted to return to explore in more depth Rampur, the city where his parents and my uncles had grown up. Later, in 2019, I had the chance to return to the city with my cousin, who had strong connections to Rampur.  Unfortunately, I had a broken foot at the time, so I wasn’t mobile enough to explore much beyond the walls of his family’s home. Still, I met his relatives and other residents, and hoped to visit the city once more.

As a photographer, I wanted to photograph Rampur and my family, but my links to the area were still tenuous. I wasn’t sure if the project was just my romantic idea, or if I could create something meaningful. I wasn’t sure how to develop the concept and where to begin.

That summer, I applied to a masterclass offered by the VII Photo Agency and was accepted. The class met three times over the course of a year in Barcelona, and during the sessions I was able to discuss my ideas for the project and get feedback on my photographs. One of the requirements of the class was that I visit India again — so that was my excuse to make plane reservations and visit. In 2019, I returned to Rampur, this time alone. 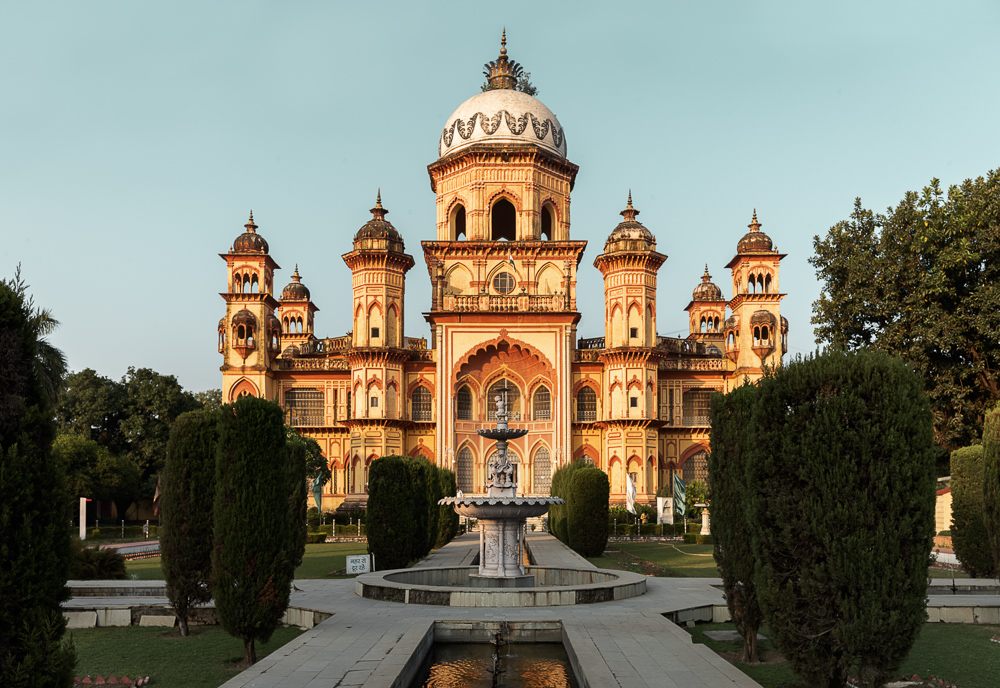 What was your sensory and emotional reaction to Rampur?

I had never visited a Muslim-majority city before, so Rampur felt like an exotic, foreign land: The transportation was different — bumpy rickshaws. The architecture was old and beautiful. The streets were narrow, and bustling with residents and shoppers who traveled from the surrounding villages to buy their wares. Many of the women dress in black burkas, complete with headscarves. I felt a little intimidated, and tried to blend in by covering my head. I later realized that the women didn’t always dress like that, but that it was fashionable to do so.

Rampur has well over 300 mosques, so five times a day the streets are filled with the Call to Prayer. In each mosque, a man chants the call through a loudspeaker, and the calls overlap at different volumes, because some mosques are close and some are far. Every few hours it seems the whole city is alight with song.

It is filled with Pathans, my family’s ethnic lineage. The British considered Pathans a warrior race, and the city is known for its decorative — and deadly — knives. As friendly as the city seemed during the day — at least in the public markets — it could feel just as unsettling at night. Rampur has a reputation as a tough place. 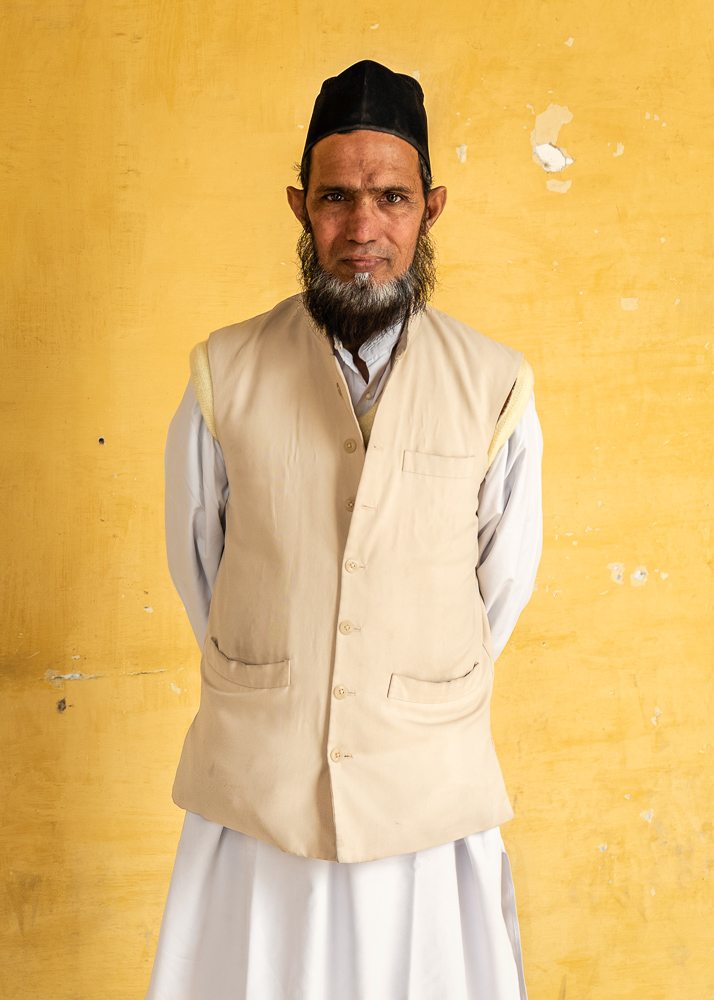 I’m interested in your internal journey and what you took away from the experience. Do you feel changed by it?

Growing up, my Indian heritage felt like something separate than my reality. I grew up as an American, and my father, who looked Indian but had a British accent, sometimes confused people. Even though I looked different than most of the kids in my neighborhood, I didn’t know much about my Indian background. I was a little embarrassed when people asked questions about my heritage and I couldn’t explain.

Since my trip, I have read about the history of the city, and the Pathans, and now have a greater understanding of my extended family and my Indian ancestry. I feel more comfortable because I know more about my grandparents, my father, and perhaps even myself. 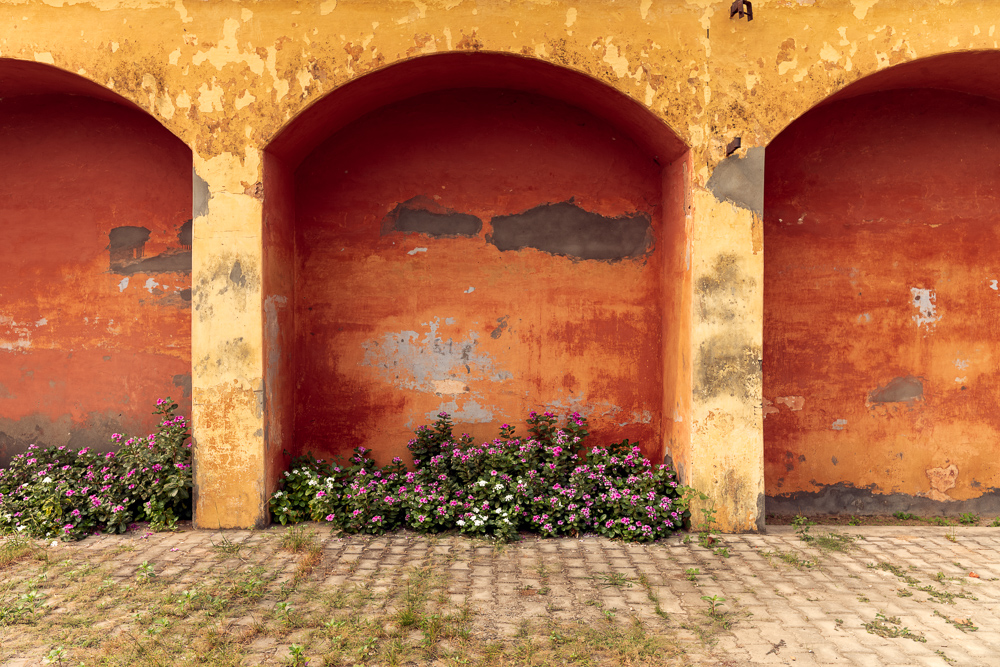 You mention that you played with the formality of Indian-style portraiture popular during the pre-world war era–can you describe that approach in more detail?

I was particularly interested in the time period when my grandfather first left India, in the late 1930s. I visited the British Library in the UK to research the history of Rampur, and I came across beautiful portraits and architectural photographs. In the pictures, the subjects were formally posed, perhaps because they were important enough to be photographed and took the occasion seriously. Today, Rampur struggles with poverty and literacy, and can feel a bit like a city that time forgot. Its link to history can also extend to the way people interact with the camera.

I normally shoot unposed photographs, often when people aren’t paying attention to me. I don’t have much experience asking people to pose, and in the US, if you ask to take someone’s picture, they will mostly likely smile widely. Rampur feels far away from selfie culture. I never told the people in the photographs not to smile, or to look a certain way, but I was fascinated by the way they chose to hold themselves. Their expressions felt dignified, even regal. The way they held themselves reminded me of historic photographs. The poses were so different from what you would find in the US, and more cosmopolitan cities in India, that it was quite refreshing. 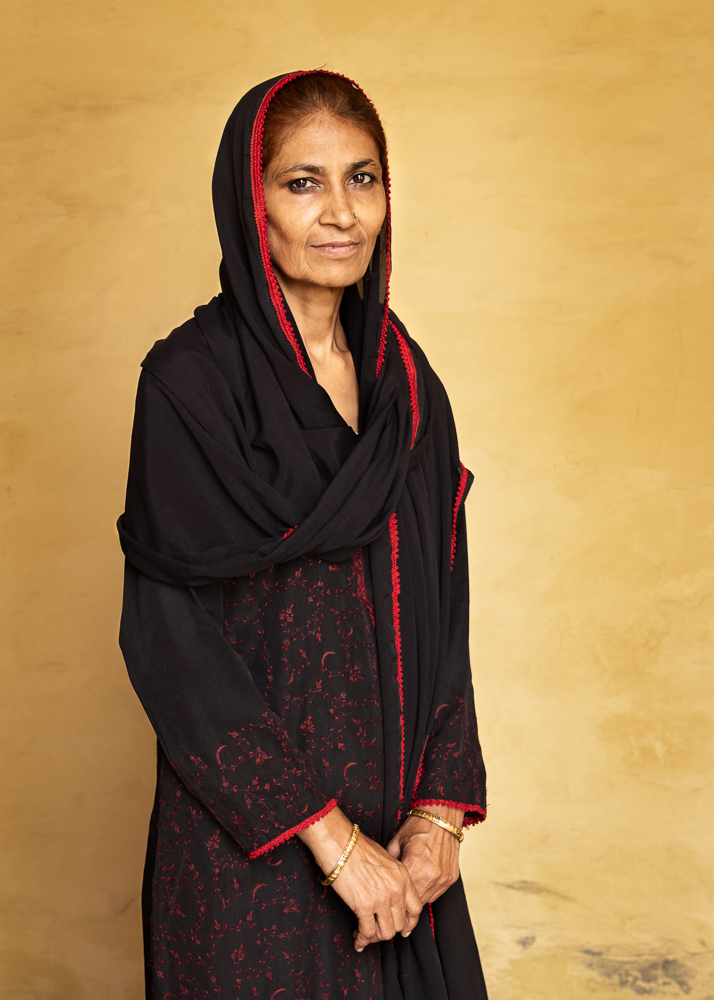 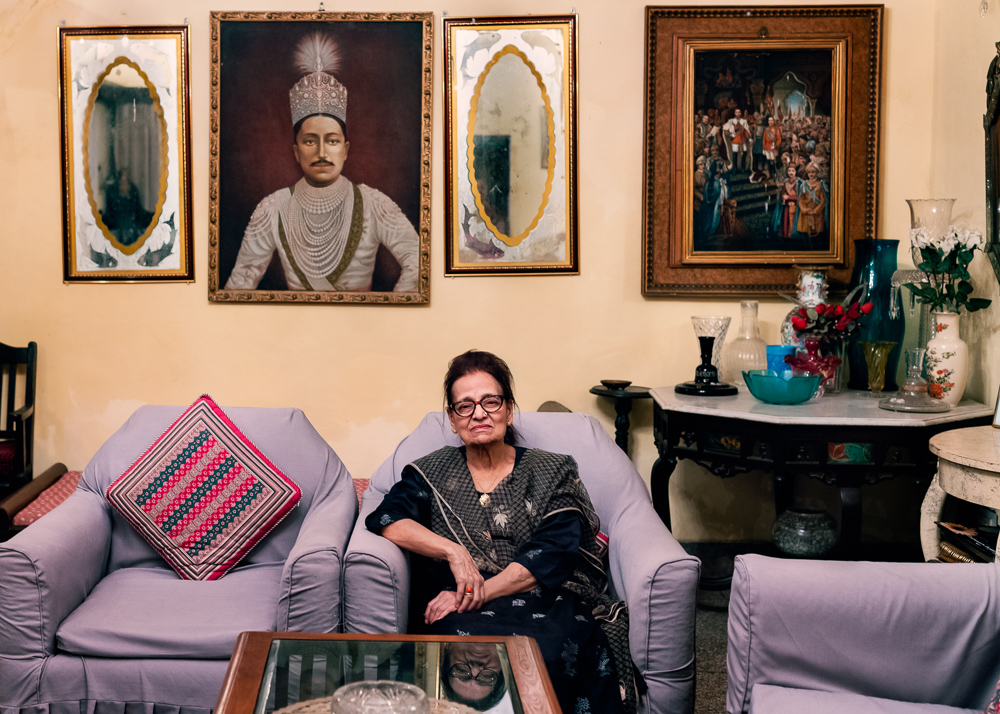 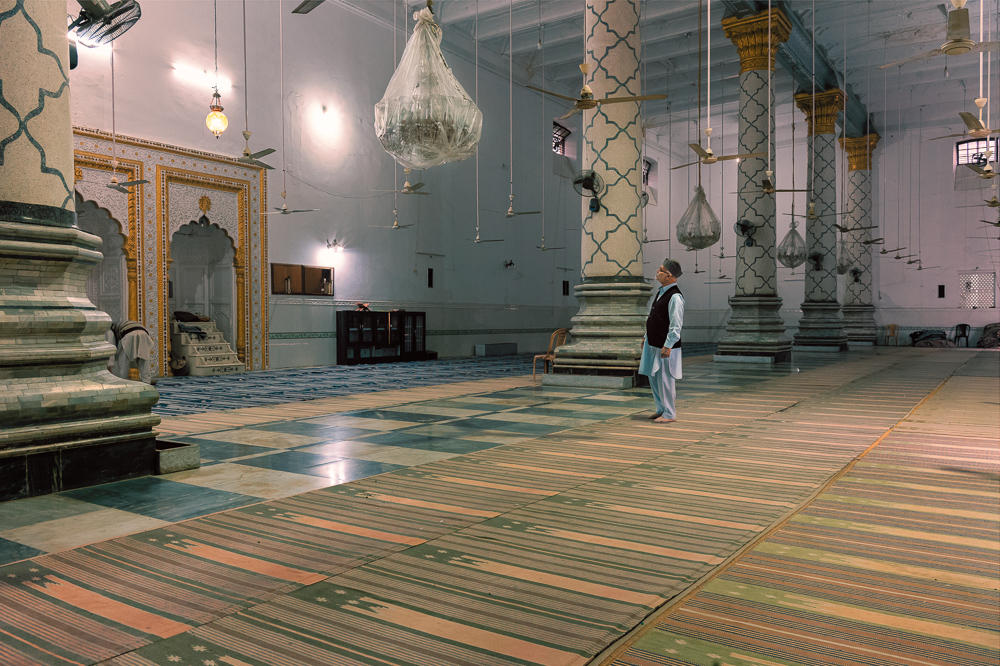 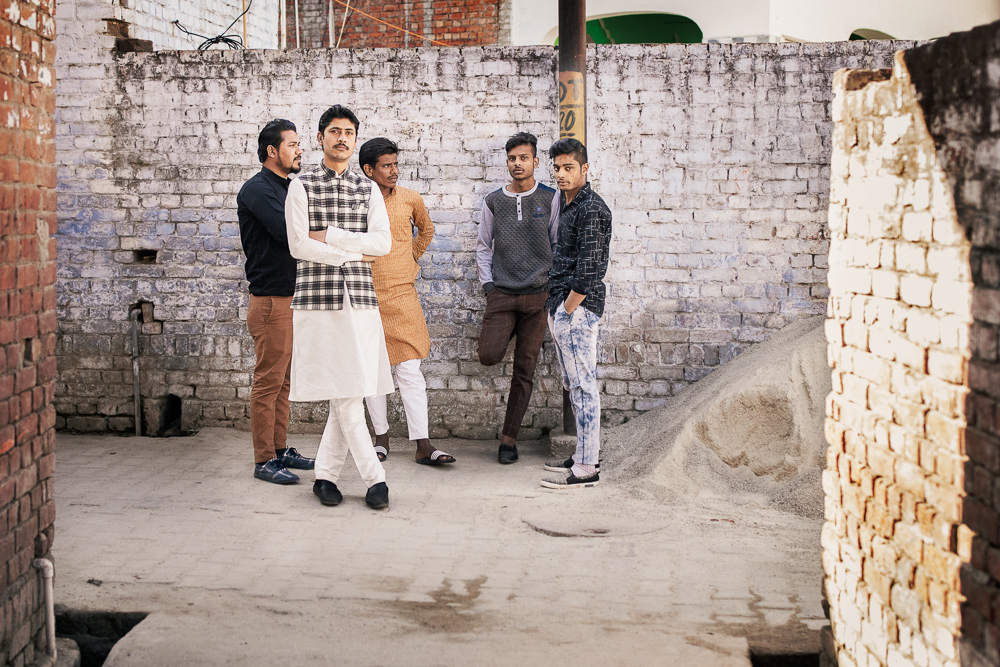 ©Tira Khan, The End of the Alley 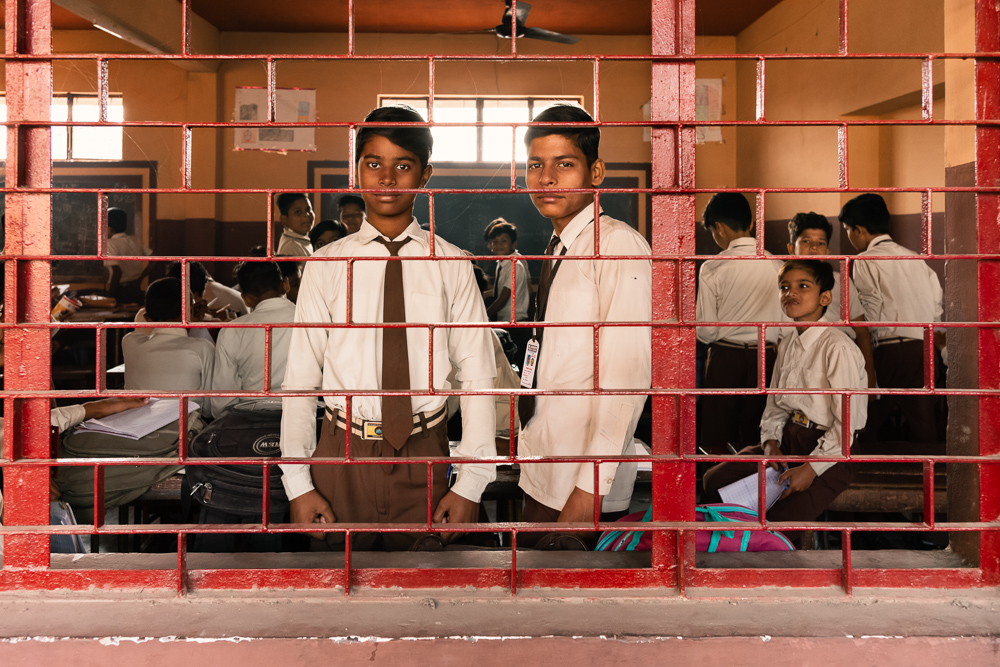 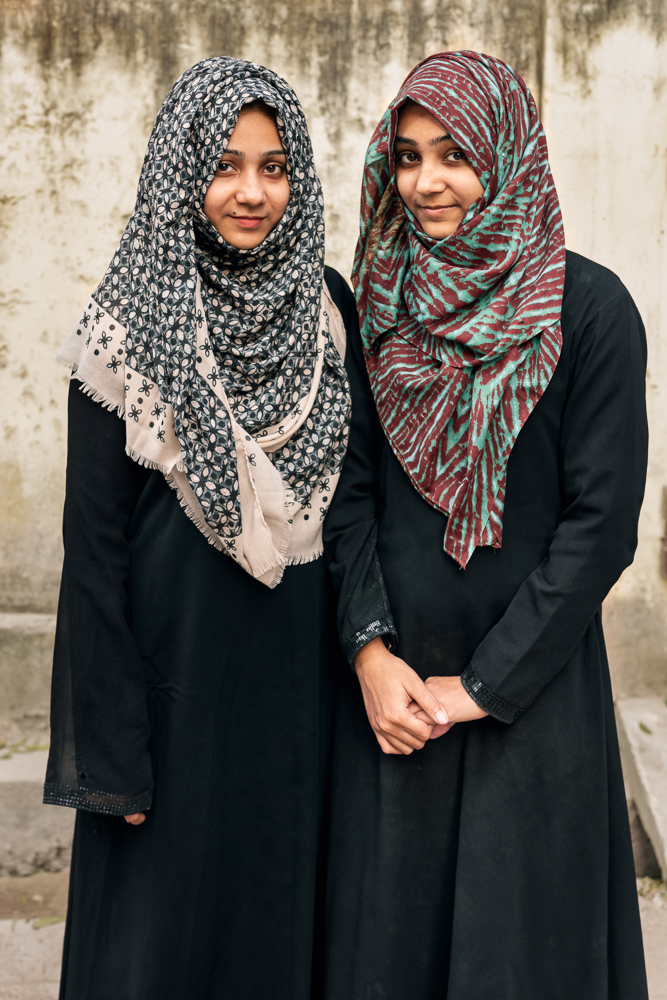 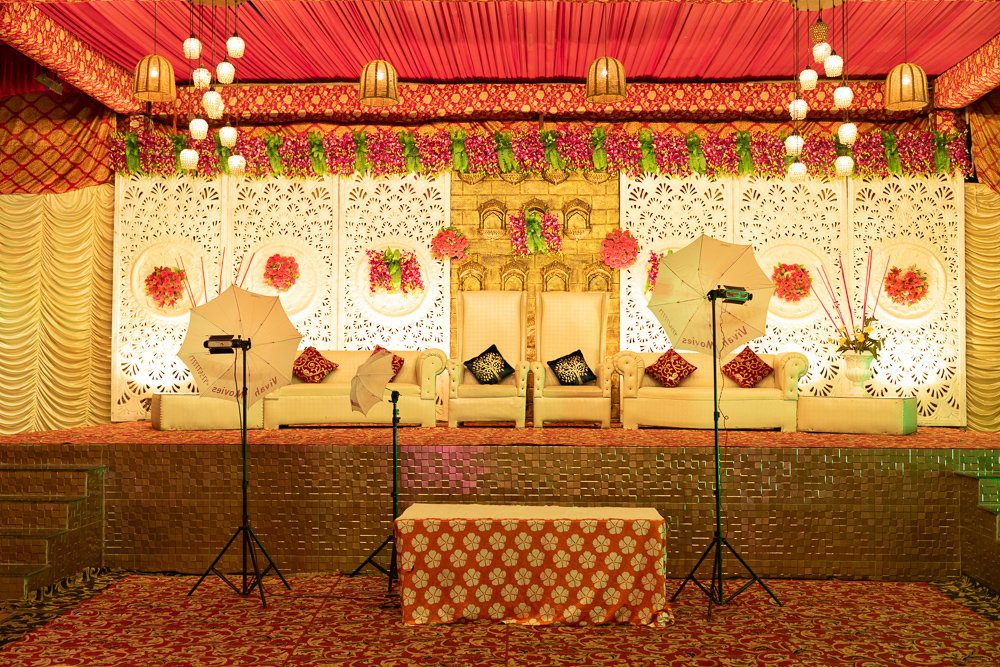 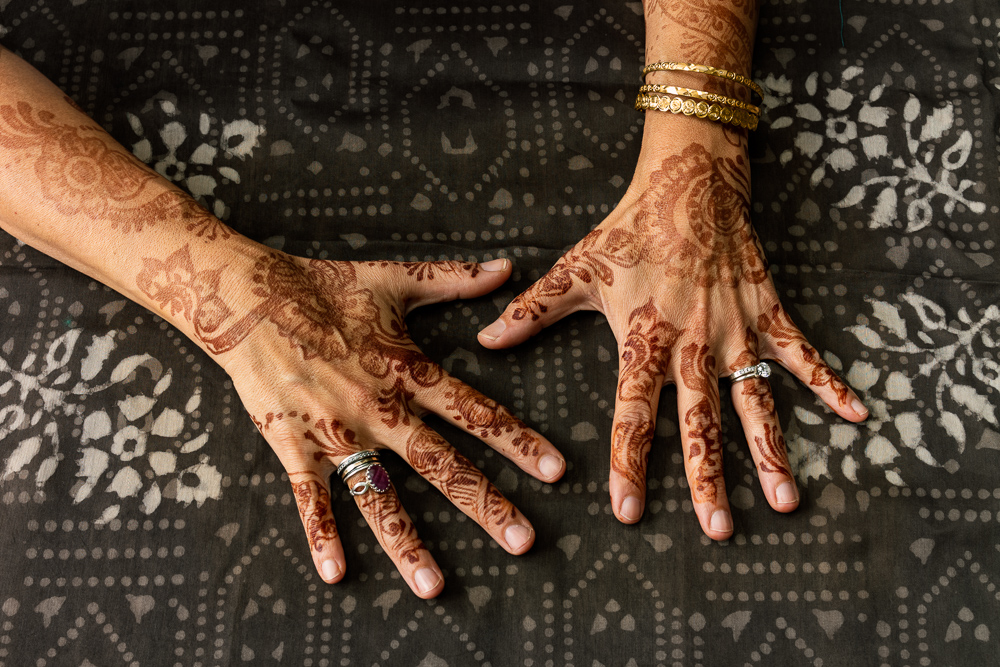 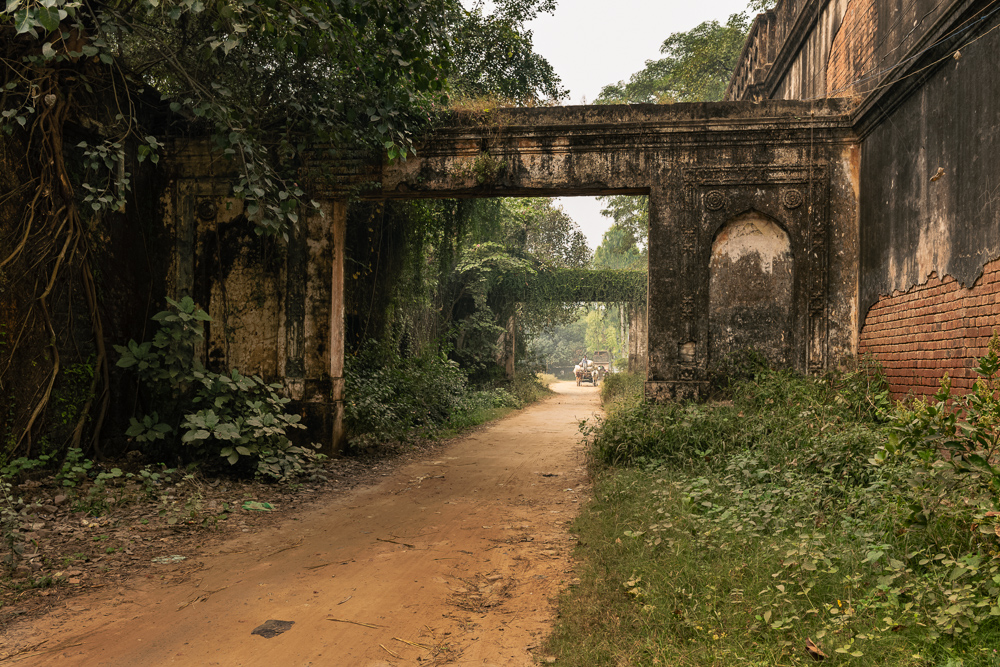 ©Tira Khan, Walls of the Palace, and a Cart