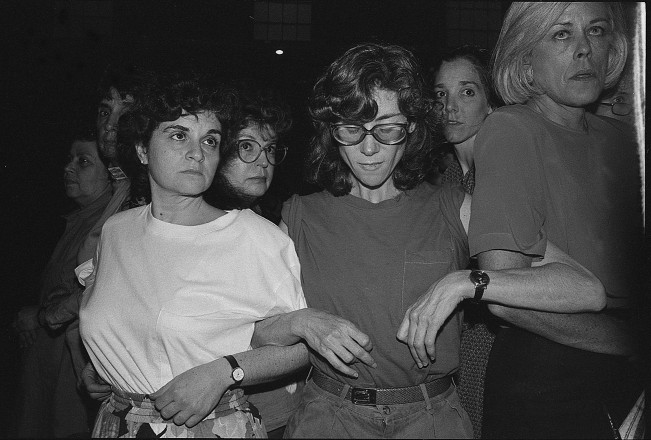 We are taking a 2-day break from Photographers on Photographers to highlight two important projects on reproductive justice. Today we interview Meg Handler who has a long legacy of advocacy and documenting social histories. Handler is a significant part of the fabric of contemporary photography working as a photographer, photo editor of the Village Voice, News & World Report, Blender, New York Magazine, COLORS and Polaris Images, a curator and book editor, and the editor at large for Reading The Pictures. Her contribution to our community is significant.

Handler will be part of the upcoming event taking place, this Thursday, August 18th, through the Los Angeles Center of Photography. LACP has created a Benefit Event to Support Reproductive Justice with all proceeds going to the organization, We Are Jane. The event will feature a conversation between four photographers whose work has “given a crucial space for painful conversations about how female bodies are seen, regulated, examined and marginalized”: Donna Ferrato, Meg Handler,  Tara Todrus-Whitehill, and Evy Mages. The discussion will be moderated by LACP’s executive director, Rotem Rozental, Ph.D. To register and donate, go here. 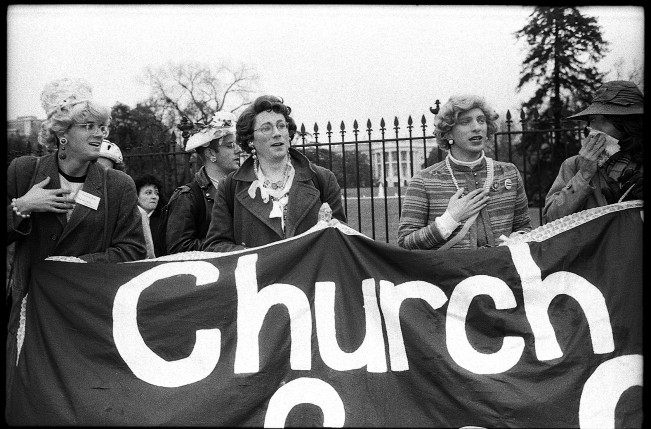 ©Meg Handler, Church Ladies for Choice, March for Life, January 22, 1992. An offshoot of WHAM!, activst group Church Ladies for Choice, comprised of (mostly) gay men dressed in church lady drag, who, in their words, “reverse the venom of anti-abortion terrorists with raucous safe sex fun,” entertaining clinic defenders with reworked hymns and standards, including “This Womb is My Womb,” “Every Sperm is Sacred,” and “God is a Lesbian” to the tune of “My Country ‘Tis of Thee.”

Meg Handler is a social documentary photographer, photo editor, and curator with a focus on politics, media culture, and social justice.

She began her career in the early 90’s in New York City photographing ACT-UP and  the reproductive rights movement. As a member of WHAM! (Women’s Health Action Mobilization) she documented several pro choice actions. Handler also made photographs of the anti-abortion organization, Operation Rescue. A cohort of independent photographers covered all this activity. After 30 years of their photographs rarely being seen, they were finally shown as part of the seminal 2017 exhibition , ”Whose Streets? Our Streets: New York City 1980-2000″, which Handler co-curated.

Handler is the former photo editor of The Village Voice. Following The Voice, Meg worked at U.S. News & World Report, Blender, New York Magazine, COLORS and Polaris Images. She has edited a number of books, including the monograph, Phil Stern: A Life’s Work. Other notable books, PAPARAZZI by Peter Howe, Cherry Hill: A Childhood Re-Imagined by Jona Frank and Reaganland by Rick Perlstein. In 2021, Handler left her 9-year post as the Editor at Large for Reading The Pictures. In 2022, Handler co-curated  Postcards From Forever dedicated to abortion rights, featuring both past and present photographs from several countries illustrating the ongoing global struggle for reproductive justice. Handler’s early 90’s photographs of the abortion rights movements were recently published in The Washington Post.  Handler lives in Chicago. 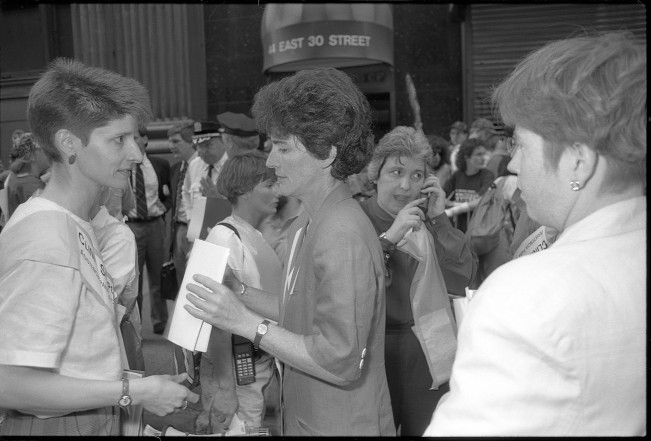 On June 29, 1992, the Supreme Court of the United States reaffirmed Roe v. Wade in its decision on Planned Parenthood v. Casey. Beginning with the annual March for Life in Washington D.C.  in January, these photographs document the lead up to and the aftermath of the Court’s decision.

My intention for this work was to make a historical record. I was also deeply inspired by the dynamism and dedication of the activism on both sides of the abortion issue. Furthermore, it was important for me to balance my coverage. I started making photographs of the anti-abortion movement to try to understand why they were so intent in their efforts to overturn Roe v. Wade.

Operation Rescue’s presence at the demonstrations I photographed was minimally aggressive, using theatrical  tactics that included carrying bloody baby dolls and signage with gory images of allegedly aborted fetuses. At times their way of protesting could be quiet and prayerful, but it was also performative and often absurd. I wanted to capture these conflicting ideas in a way that was respectful and illustrative of that absurdity.

With the overturning  Roe and Casey, these photographs provide a nuanced view of the battle to maintain abortion rights in the United States. – Meg Handler 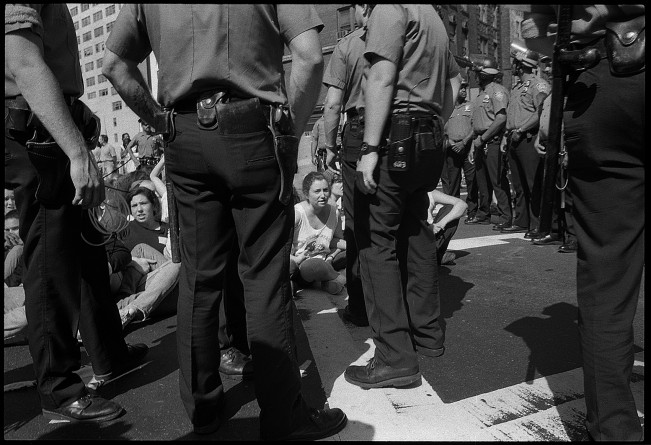 Tell us what brought you to photography.

Growing up I poured over the photo and art books in my parents library. They had the Diane Arbus monograph, along with several of the LIFE Magazine “Year in Pictures” books. I broke the spine on that Arbus book, I looked at it so much. I was always a people watcher. When I was bouncing around during college, trying to figure out what I wanted to do, I had a friend who was studying photography. She was doing street photography and I think I saw what was possible and how I could combine my love of watching people with making art. I ended up studying photography at Rochester Institute of Technology where I started to develop my eye and learned technical skills. 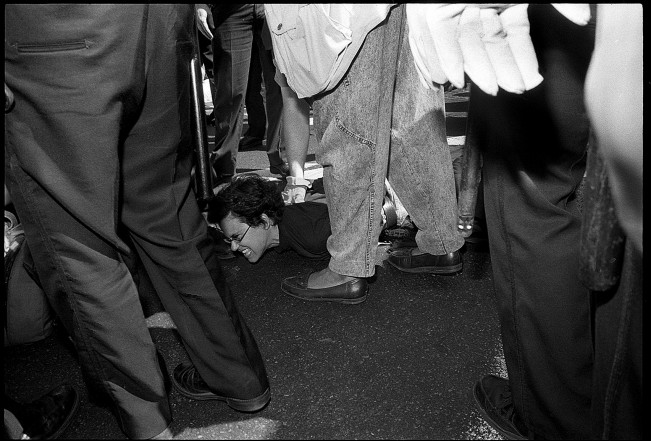 I love looking at your photographs and knowing you were THERE to witness so much NYC and American history in the 80’s and 90s. You’ve created quite a record!

I started making pictures in the mid 80’s. My earliest body of work is of the artist Tyree Guyton and his Heidelberg Project. This is an art environment on Detroit’s east side. Tyree would take abandoned homes in his neighborhood and make art out of them. This was a creative and political act. The day after I photographed there for the first time, the Mayor of Detroit had “The Baby Doll House” torn down, it was an “eyesore and a fire hazard”. The irony is that it was a crack house before Tyree transformed it. My experience there taught me about the power of public art and community, the power and hypocrisy of the government and the importance of documenting cultural moments.

I got to New York City in late 1990. The first demonstration I photographed was an anti-war protest at the Desert Storm Welcome Home parade. One of the best photos I made that day is of a woman holding a sign with Kenneth Jarecke’s iconic photo from the “highway of death”. Seeing that photograph combined with all that fanfare for war had a profound effect on me. I started to volunteer, photographing for a few organizations. I worked with GMHAC (Gay Men’s Health Crisis) and the Women’s Prison Association and  spent 3 years making work on AIDS activism, ACT UP, LGBTQ civil rights movement and the abortion rights movement.

What made you move from the view finder to becoming an editor at the Village Voice?
I had a unique way of working in the documentary form. I didn’t feel my work was marketable at the time and more importantly, I was not in a position to freelance, I needed a full time job. I decided early on to pursue a career in photo editing. I loved looking at other people’s photographs and I felt because I was a photographer myself, I could work well with other photographers. 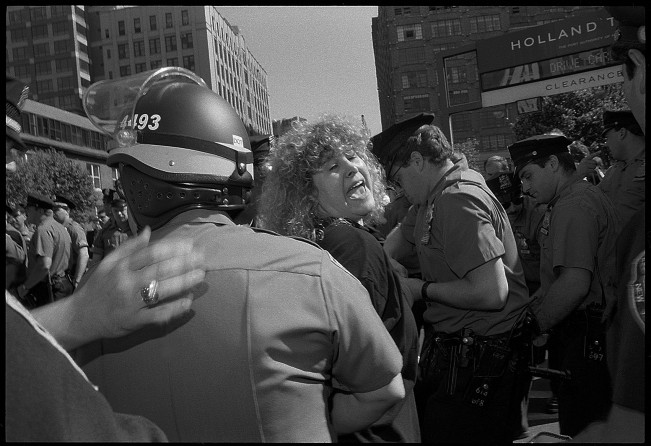 Working at the Village Voice must have been so interesting. Can you describe those heady years of photo editing?
It was wonderful. I got to work with some of my favorite photographers and I helped people jumpstart their careers. There was a paid intern program at the paper that Fred McDarrah started. The interns did assignments and worked in the darkroom. We were working in the last days of the analog and print eras.
That time was so culturally rich, I really enjoyed being a part of all of it. 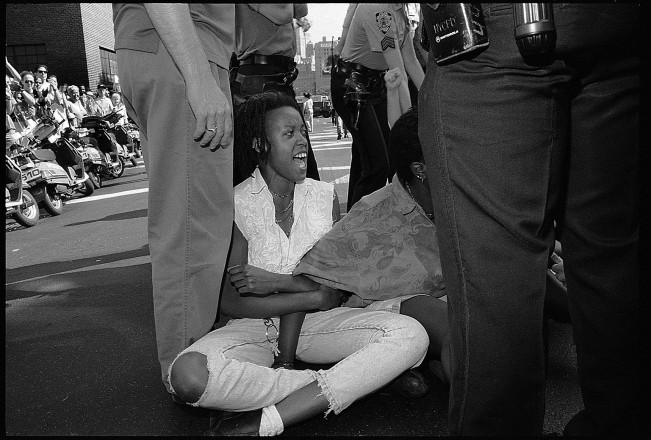 You’ve worked with the photographic image in so many capacities–from photographer, to editor, to book editor, and curator. Has one arena been particularly meaningful to you?

Working on artist’s books is my favorite. I love every part of the process, from the research to the editing, the sequencing, and working with writers. I like the tactility and permanence of a book and knowing that I helped make that object. 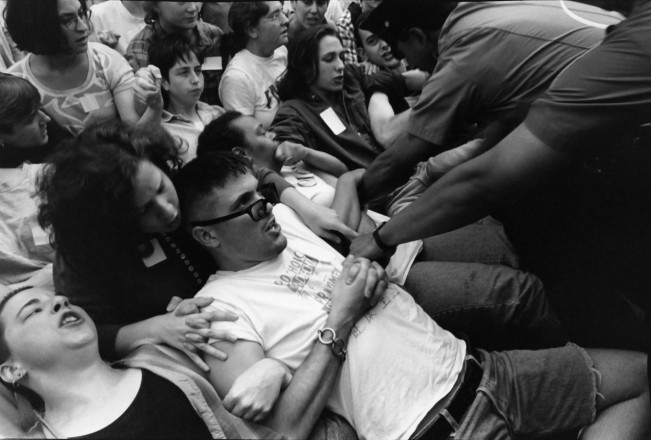 You are returning to your own work lately, what have you learned about yourself as a photographer?
I’ve been looking at pictures for 30 years, mostly not my own. Everything I’ve looked at over all these decades has led to me experience my work in a different way. I’ve learned that my work is a singular vision. I got close, not because of what Robert Capa said, but because it was natural for me. I see that clearly in my pictures now.
Lastly and considering current events, I see how important it was that I made these photographs. I documented history, just as I intended. 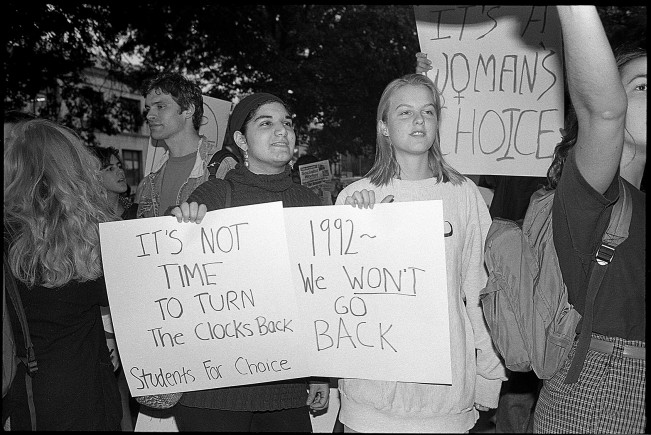 What’s next?
I will continue to use my photographs to organize around abortion rights. Come September, I will be begin research on a very exciting photo book project. 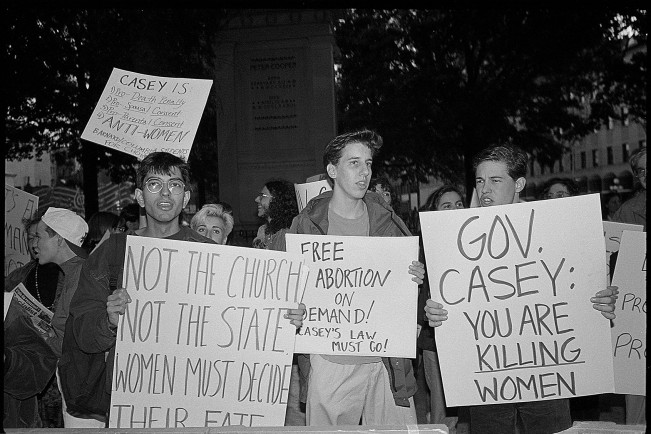 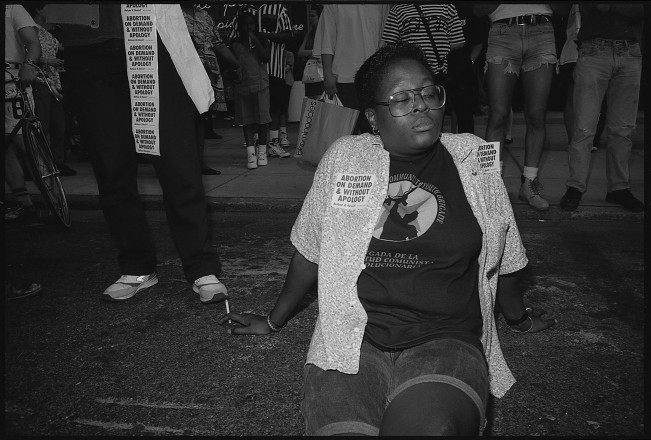 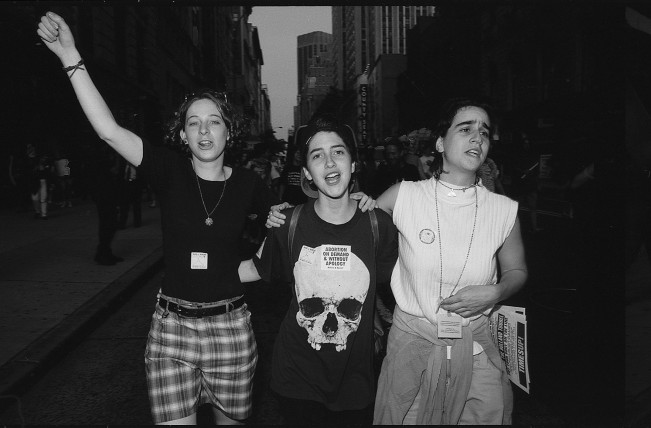 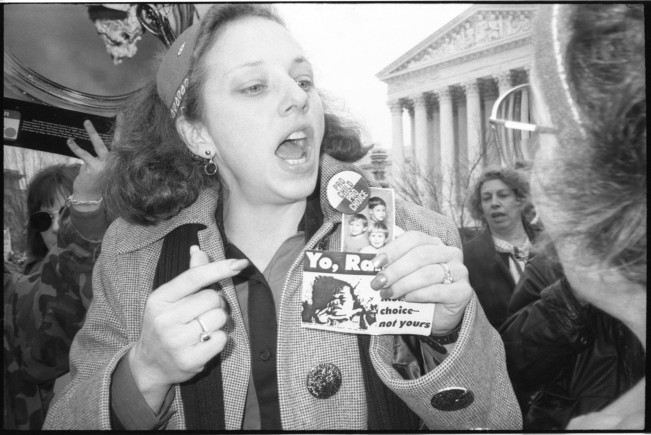 ©Meg Handler, Pro-choice activist confronts Operation Rescue at the annual RIght To Life March as it passes in front of the US Supreme Court building. Washington DC., January 22, 1992. 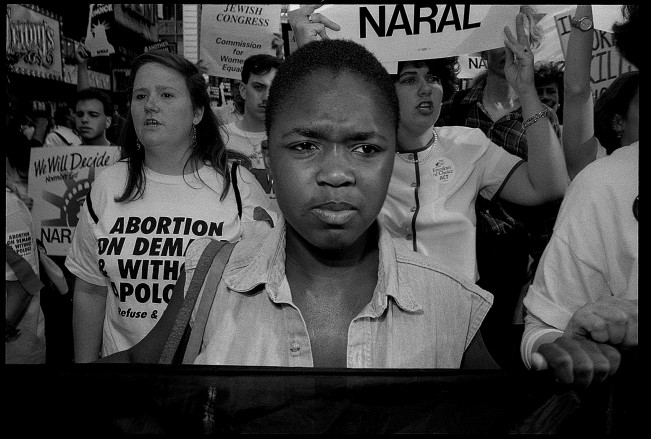 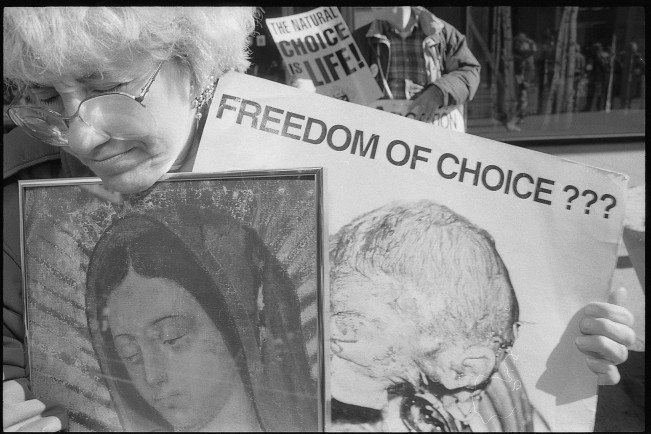 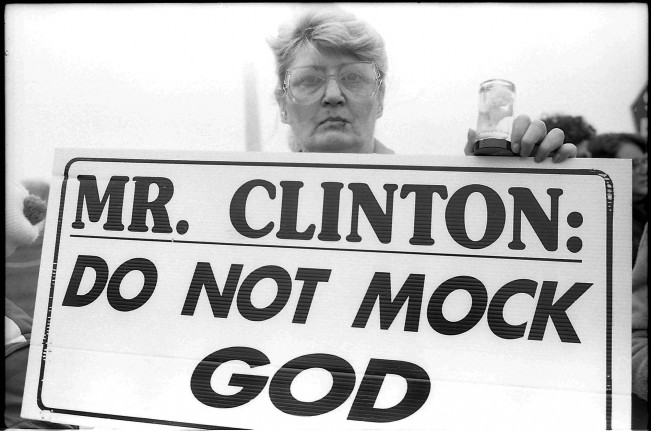 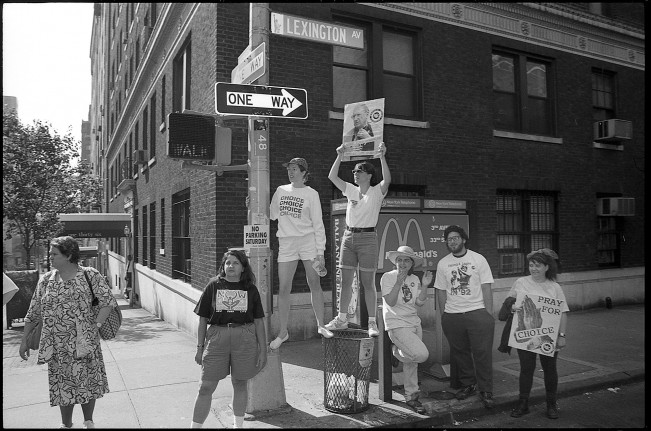 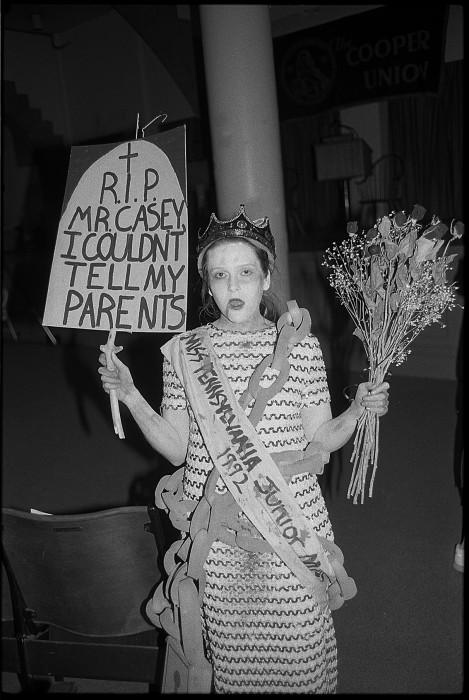 NEXT | Tara Todras-Whitehill: Portraits: I Had An Abortion >
< Photographers on Photographers: Alex Henderson in Conversation with Rahwa Weldemichael | PREV