Congratulations to Mary Ellen Bartley for her 2nd Runner-Up win in Canteen Magazine’s Naked Judging Contest. Going into the second round of jurying, Mary Ellen’s Sea Change portfolio was the highest rated by the first round of judges (Photographer Anthony Goicolea, photographic duo Tribble and Mancenido, and photographer (and Canteen‘s Art Director) JJ Sulin).  But because judging art is a subjective process, the second round of judges felt differently, in fact there was a moment when this portfolio teetered at the exit door.

A New York City native, Mary Ellen now resides in Wainscott, on the east end of Long Island. She earned her BFA at Purchase College, where she began her fine art studies in painting and drawing. Bartley was chosen as a Photolucida Critical Mass top 50 photographer in 2012 and 2011. A combination of her book projects was exhibited in a solo show at The Drawing Room Gallery in East Hampton last summer and she was chosen by the painter Ross Bleckner to exhibit her work alongside his at the Parrish Art Museum in Southampton, New York. Other recent shows include Out of Print, Altered Books at The Bakersfield Art Museum, Anthology at The Southeast Museum of Photography, Exposure 2012 at the Photographic Resource Center juried by Alison Nordstrom and Equivalents at Photo Center NW juried by W. M. Hunt.

The first round of jurors created this response:
These are great. I wonder if these are the artist’s own images of water, or are they appropriating the images. Not that that matters. I really like that one with the rip–it works because it simulates a wave — at once a literal and figurative representation. I like the tactileness of these. A consistent mood. It’s not precious. Each image adds something to the series–a lesser photographer would have simply used one of the ideas from this series and submitted 8 images in that single style. Contemporary view on what photography has become. Elliptical vignette (#6) is the only one that doesn’t work for me–seems a bit hokey.

Note by me: The interesting thing is that what excited the first round jurors was a flaw for the second round of judges: the rip in the photograph.

Photographer’s Response to the Judging….
I decided to enter the contest to support the pioneering efforts of Canteen to create a new kind of photo contest and to take a chance on getting feedback on an in-progress series from some really smart and plugged in jurors. I went to the live judging in Brooklyn where there were less than twenty spectators sprinkled in a fairly large auditorium. It was very engaging for the most part, a messy experiment with a lot of generosity, spirit and a bit of suspense and drama. I was sitting right there when Susan Bright strongly suggested I should get voted off the island, ouch! Then Amy Stein single handedly pull me back from the abyss, phew!

I can’t say exactly what I learned from watching the process except that judging art, especially picking winners, is difficult, flawed and maybe a little silly. Watching this transparent process made me realize there are many ways fine work falls through the cracks. Yet how great is it that we photographers have opportunities like this to get our work in front of people who are influential, passionate about photography and so game to foster more conversations about it ? I was so happy to meet Amy, Susan, Arnold and Anthony briefly after the event, they were lovely. Later I had the pleasure of chatting with some of the fine folks at Canteen, Stephen Pierson the publisher and JJ Sulin the art director, among them. They are really dynamic and I plan to follow their work closely. Hats off to the organizers and participants!

Sea Change
Re-photographing photos of the sea’s surface where the effects of light, shadows, scratches and folds “draw” on the prints changing and expanding the originals.
I visit and photograph the ocean nearly every day and, over time, have amassed stacks of prints of minimalist seascapes. One day while working in the studio I watched as a rectangle of pure illumination shaped by a skylight raked across a large print drying on the floor. I photographed it, a timeless yet specific chronicling of multiple moments. This led to my new series: using only the natural light that enters my house, I try to capture the interplay of light and shadow on the prints, creating multiple, altered versions of the same photographs. The original seascapes explore the water’s surface, often in fog, on days when the color is drained from the scene and have the quality of graphite sketches. When I re-photograph the prints I look for happy accidents—moments when strong sunlight falling from skylights, squeezing through blinds, and projecting from windows draws and interacts with the surface of the paper and the image. 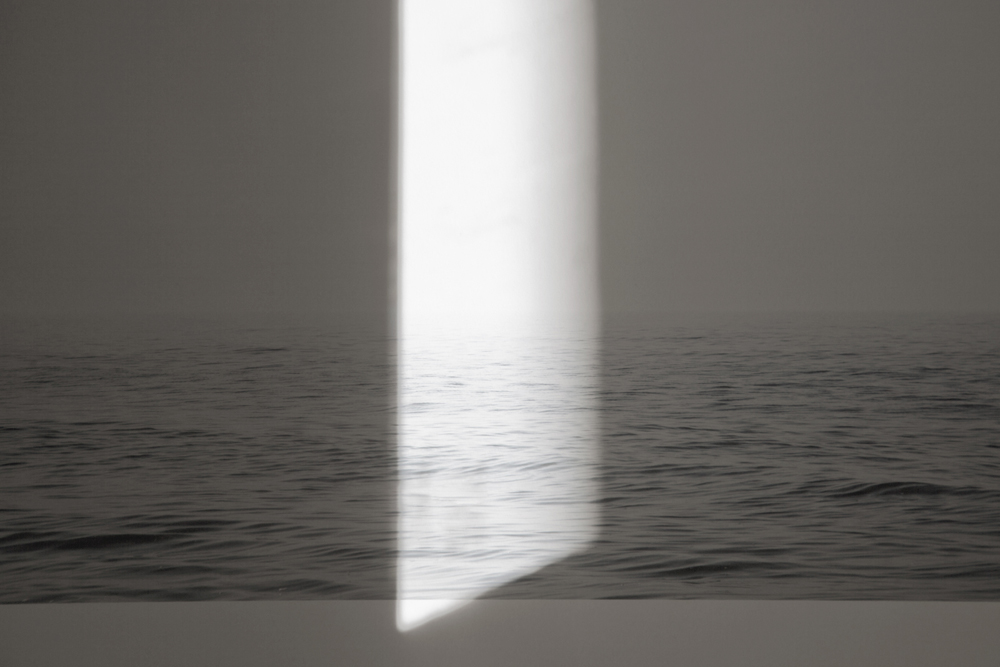 The work is improvisational. I record the fleeting light touching the various skins, matte, luster or gloss of the prints as I place them throughout the rooms of my house. I further explore the surface and materiality of the prints by folding, scratching or tearing them before shooting them again. Besides the layering of surfaces there is a more subtle aspect: the layering of time, place and mood, which I’m exploring. The action on the surface of the prints underscores the flatness of the photographs and the “drawing with light” that is the very stuff of photography. 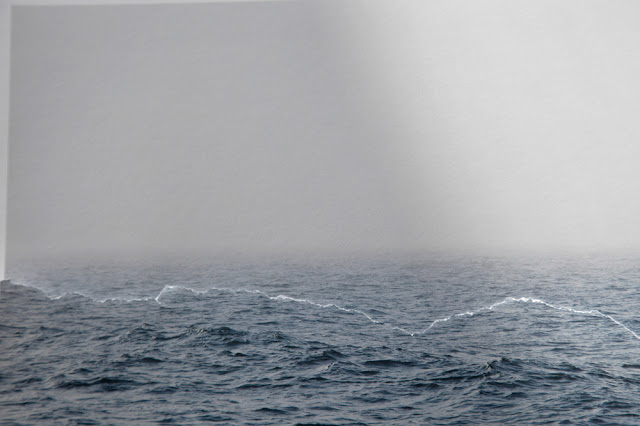 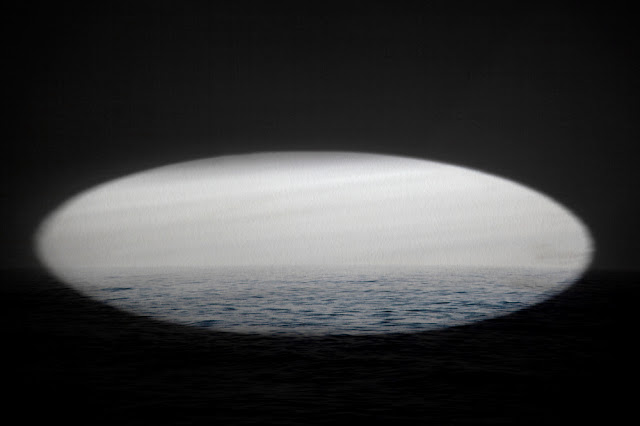 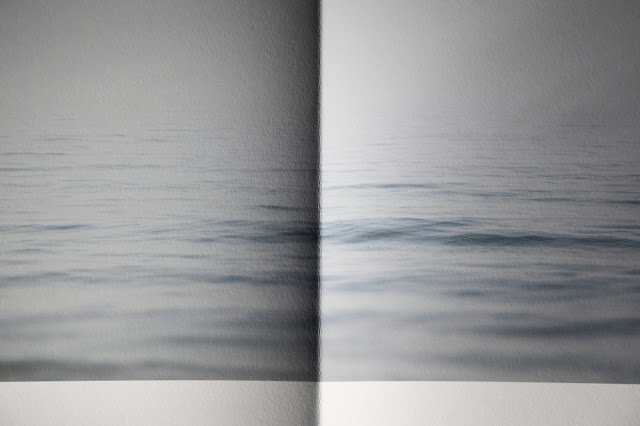 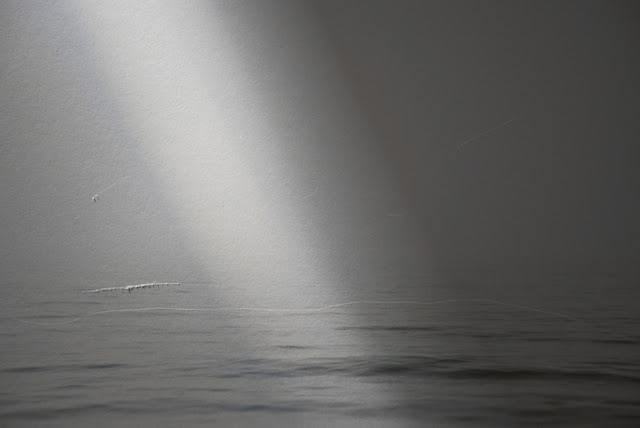 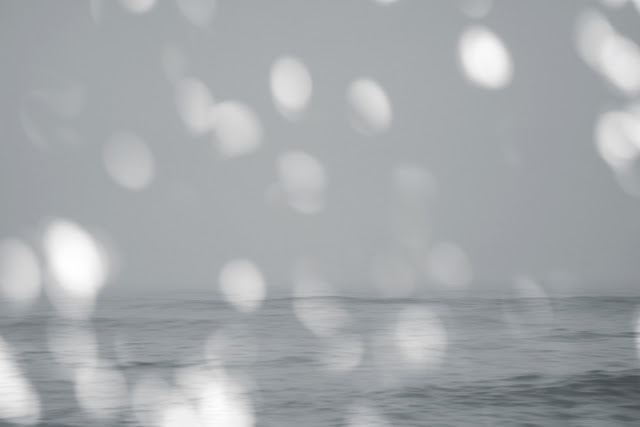 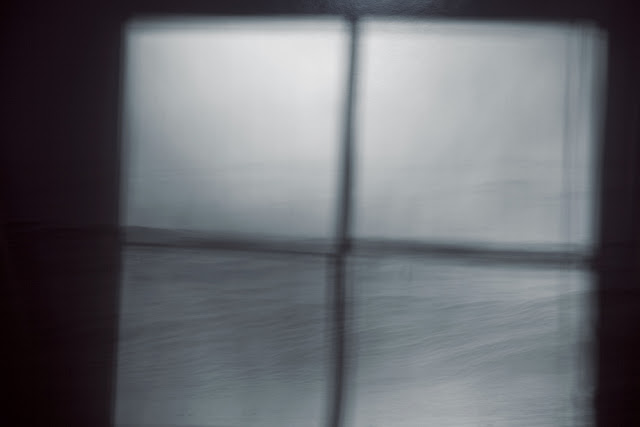