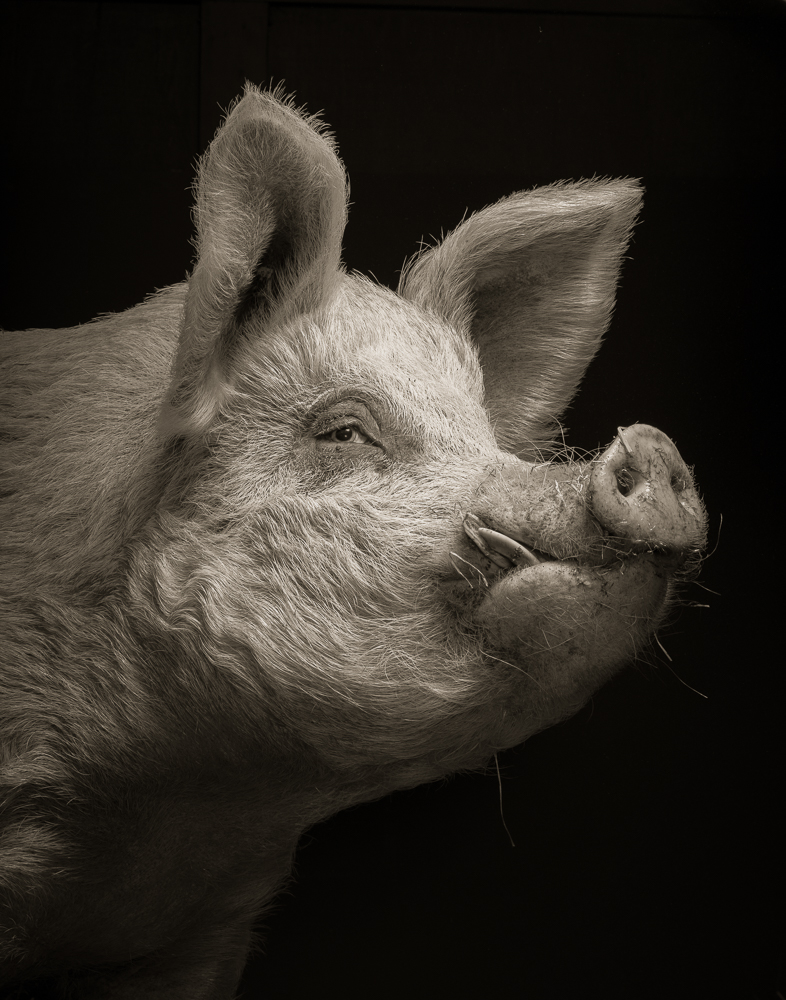 Kevin Horan comes to fine art after a career as a photojournalist. His ability to tell stories and create meaningful portraits has beautifully transferred to his new subject matter: animals. Several years ago, Kevin’s portfolio of portraits of sheep and goats, Chattel: A Portrait Story ,  hit the zeitgeist and received acclaim and attention. They were captured in a heroic, elegant way, elevating the lowly farm animal into something altogether different and revealing unexpected personalities. He brought a new portfolio to Photolucida where he continues the series with the porcine family, focusing on the pig. We understand that the pig is actually quite intelligent and Kevin’s portraits show a certain knowing, a wink and a nod on the part of the animal. There is a whimsy and a pride in these portraits and their charm in undeniable. He currently has an exhibition, Chattel: A Portrait Story at the Globe Gallery in Santa Fe, NM, running through July 5th, 2017. Pictura Gallery in Bloomington, Indiana opens Kevin Horan: Chattel on June 2nd, running through July 29th, 2017.

Kevin Horan is a photographic artist based in Langley, Washington, USA. He is working on projects which look at animals as people, people as animals, and the planet as a very small place. His pictures are reality-based, and he enjoys finding the amazing hidden in the ordinary.

Chattel was chosen for the Top 50 of Photolucida Critical Mass in 2014. It is showing at PDNB Gallery in Dallas, Kinescope Gallery in New York, The Globe Gallery in Santa Fe and Pictura Gallery in Bloomington, Ind. His work is in collections of the Santa Barbara Museum of Art, the Federal Reserve Bank of Chicago, the Comer Archive at the University of Illinois at Chicago, the National Park Service and the Museum of Contemporary Photography, Chicago.

A former photojournalist, Horan has published his work in Smithsonian, LIFE, Time, The New York Times Magazine, National Geographic and numerous other magazines. He was based in Chicago from 1976 to 2006, whence he traveled to assignments worldwide. He has been artist in residence at Glacier National Park; staff photographer for Chicago in the Year 2000; contract photographer for U.S. News and World Report; and staff photographer for the Chicago Daily News and the Chicago Sun-Times. He received a bachelor’s degree in journalism at the University of Illinois at Urbana-Champaign. 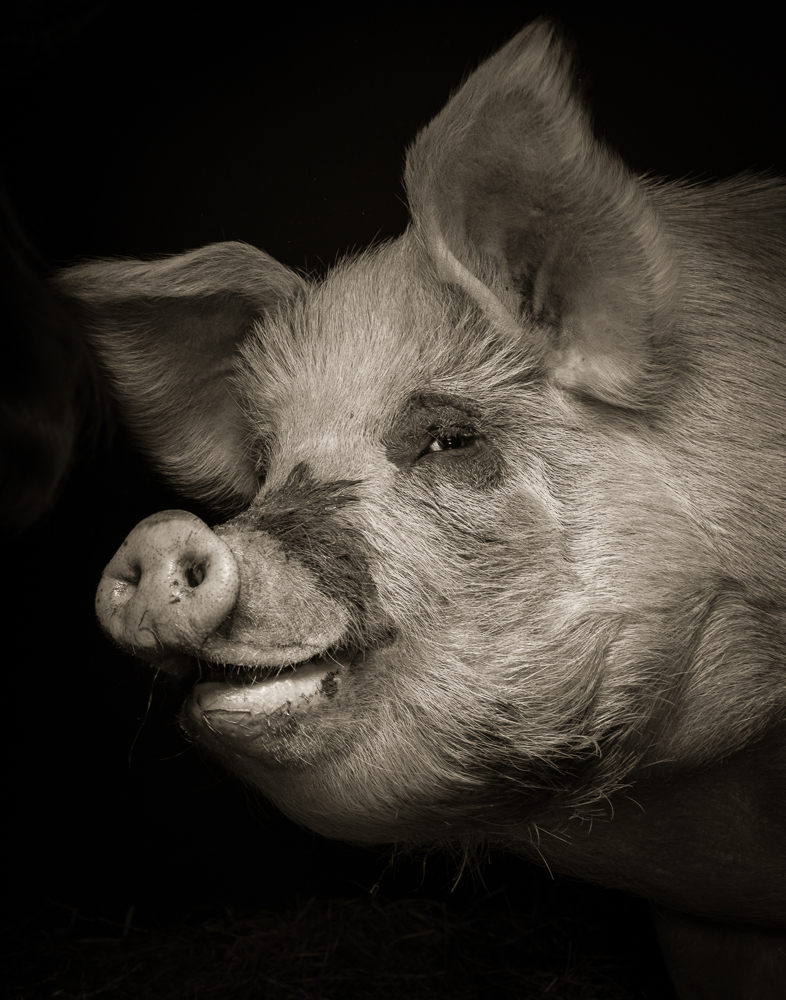 The world around us pulses with living, throbbing, wanting, creatures.

After a move from city to country, my new neighbors–ungulates–greeted me in a chorus of voices each time I returned home. Soprano, bass, raspy, soft, quick, slow: they were all different. It occurred to me these creatures were all individuals. Deep experience in making portraits of humans made me wonder if I could capture them as such. In their faces, I was looking not for animals who looked like people, but for non-human persons.

Treated as if they were customers of a small-town photo studio, they seem to have personalities. Perhaps they do, and the photograph allows us to see them. Or perhaps the language of the photo cues us to generate the impression of a personage.

When we make a portrait, what is it that we’re seeing? Do the pictures here prove that the pigs have personalities? This is a work about portraiture–what it does and how it works. These pictures ask for engagement of our own feelings about the souls within other beings, human or otherwise, and how visible they are from out here.–K.H. 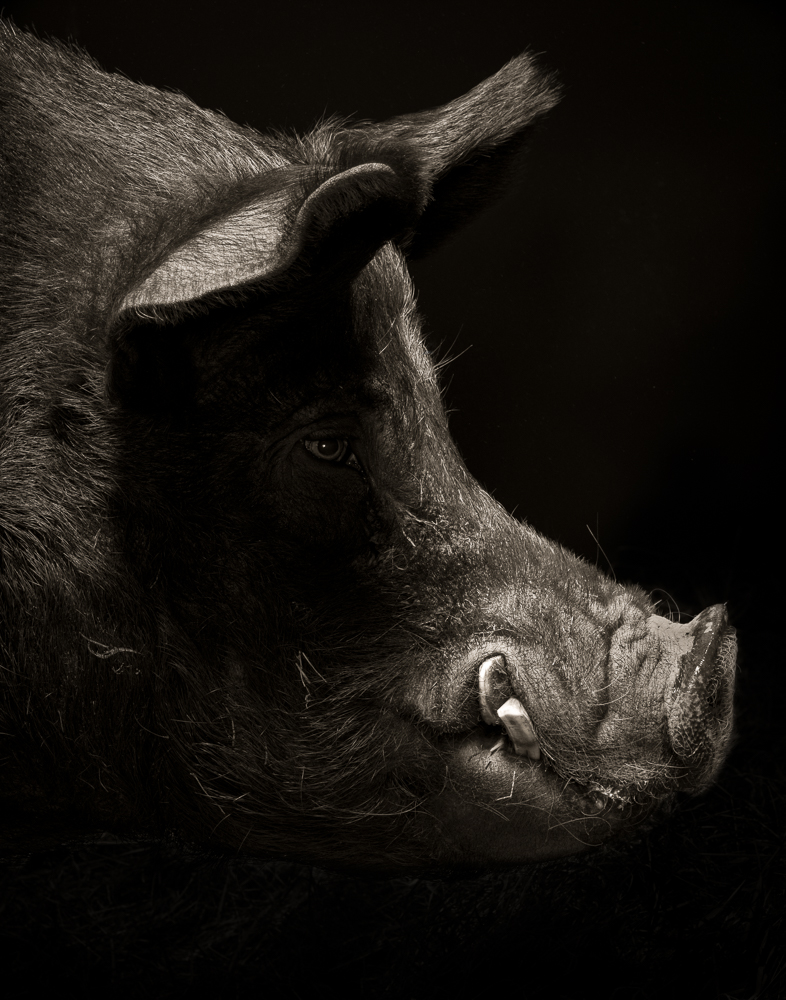 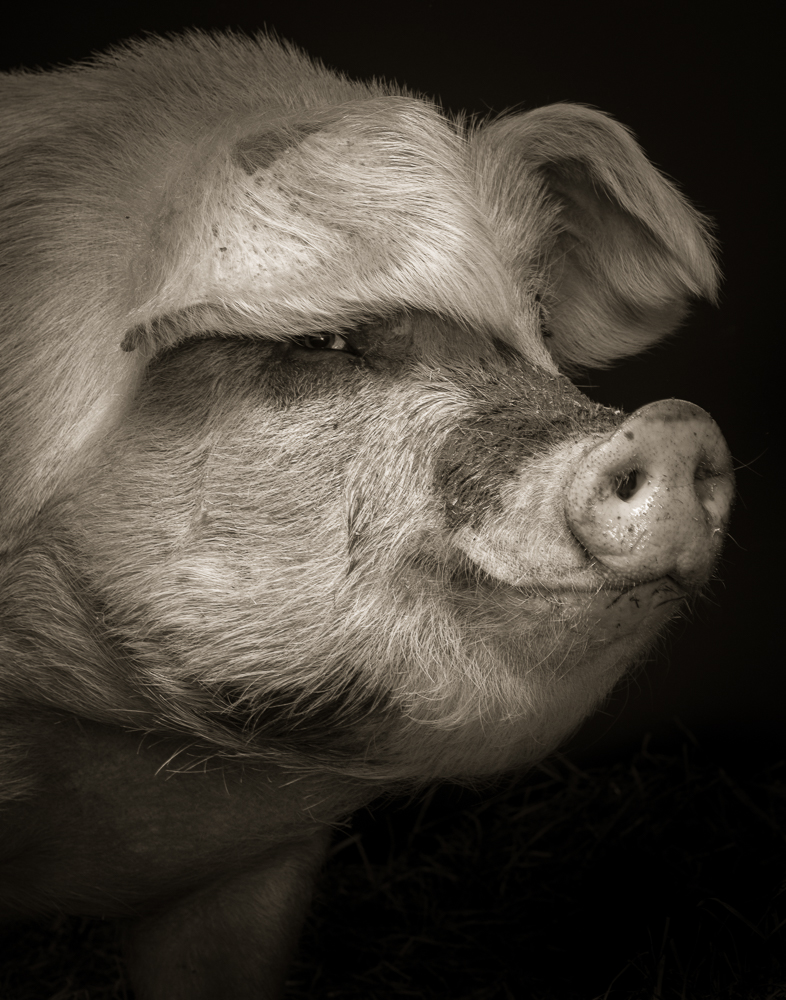 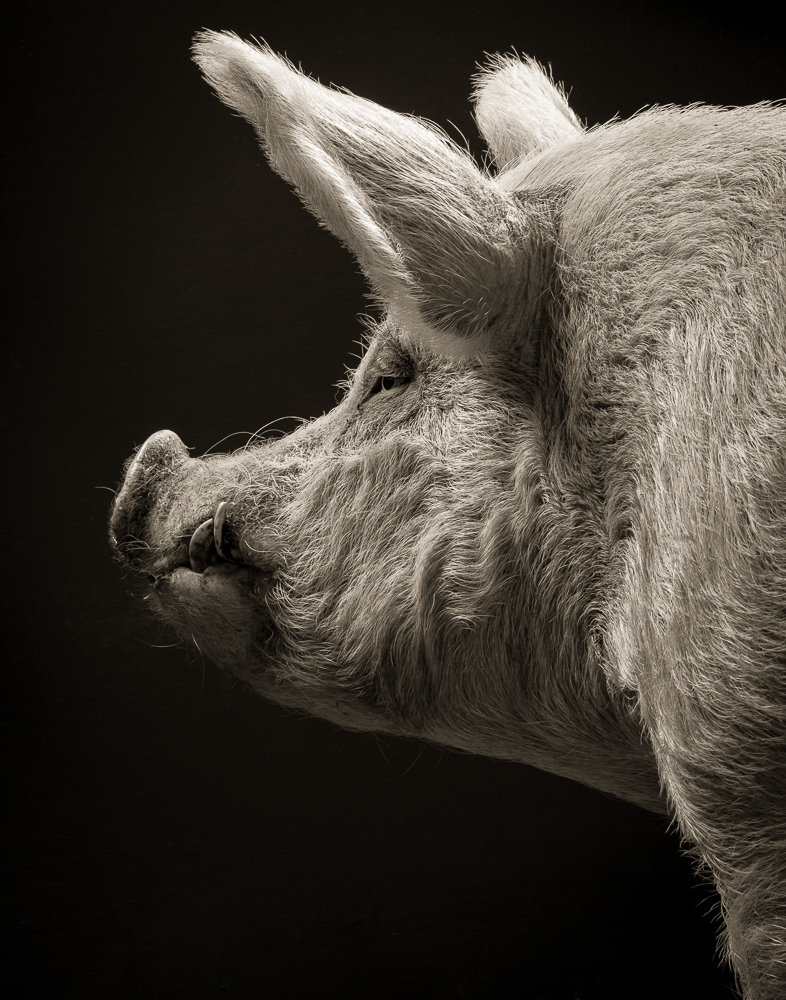 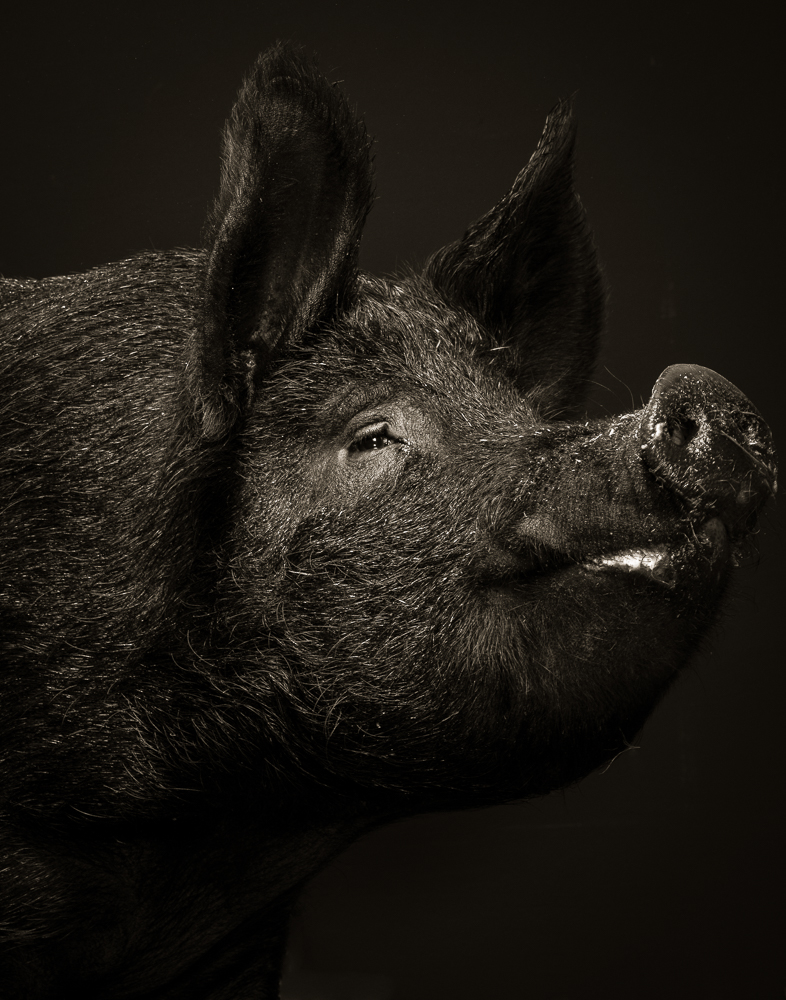 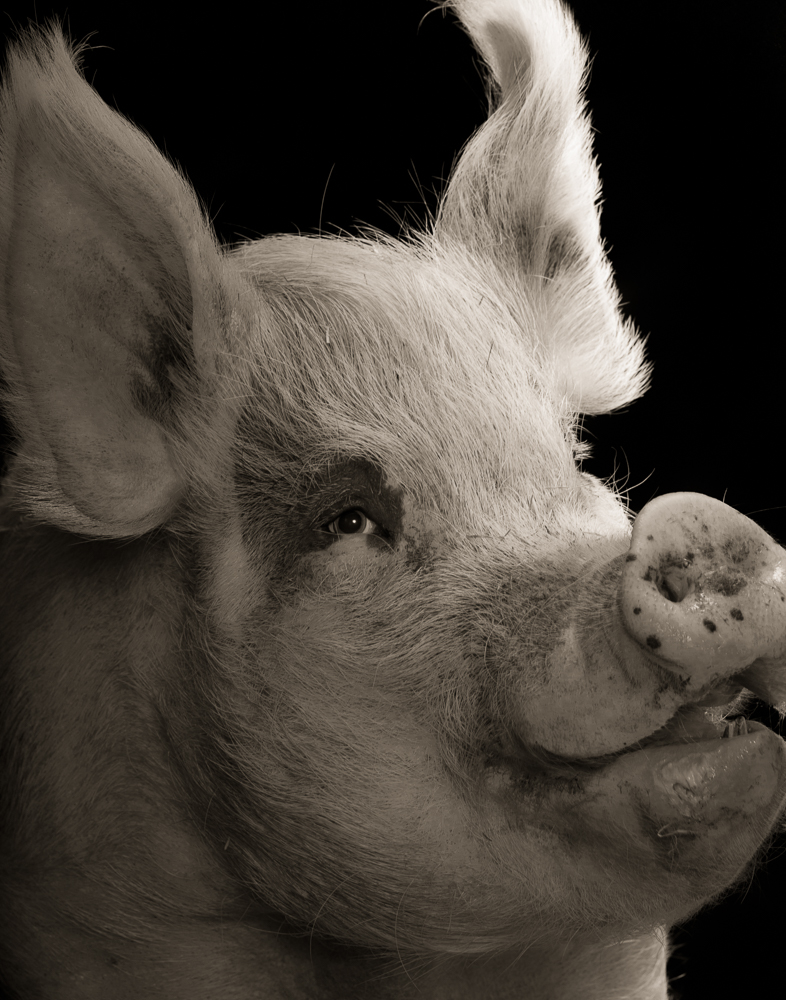 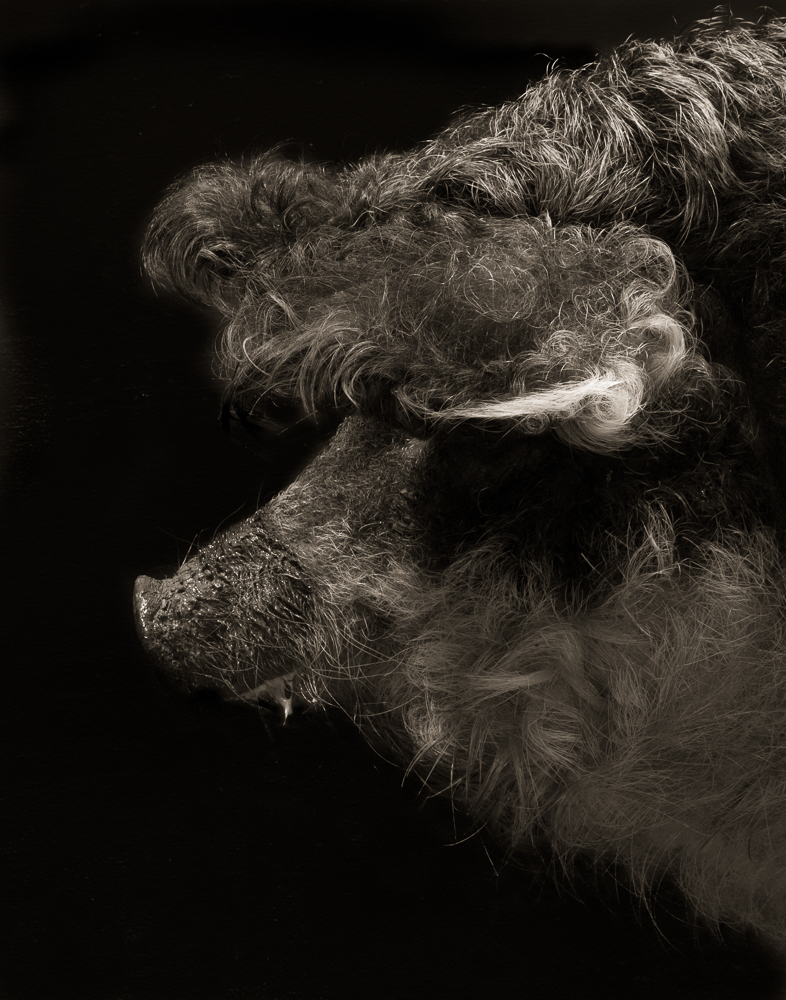 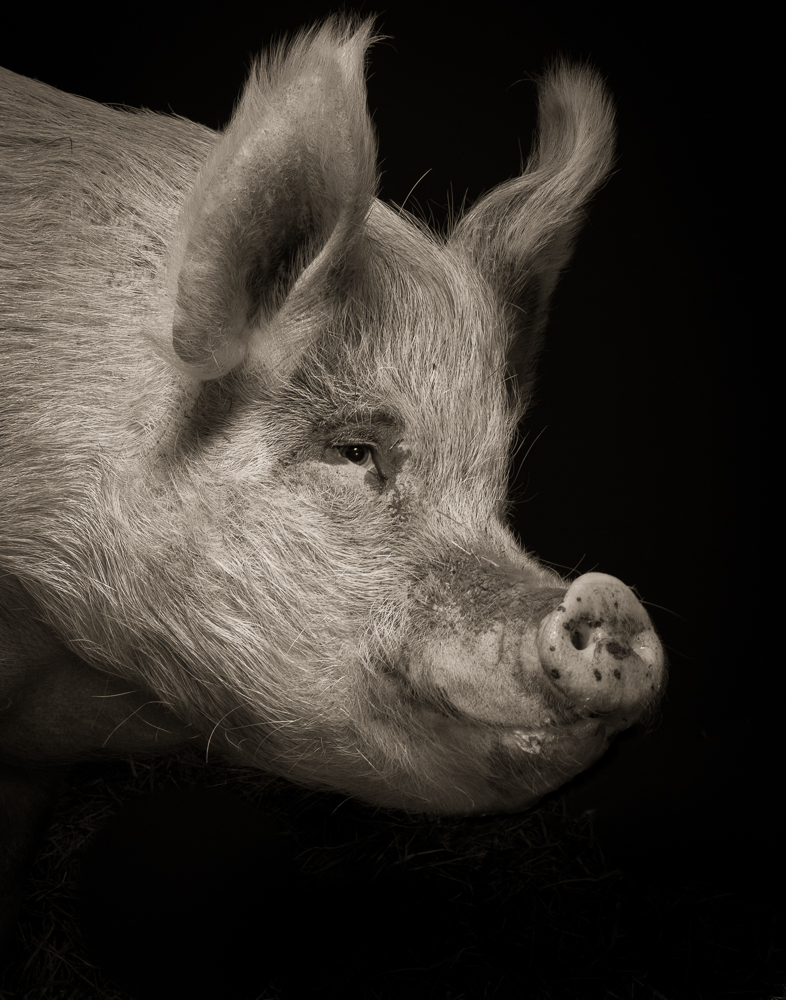 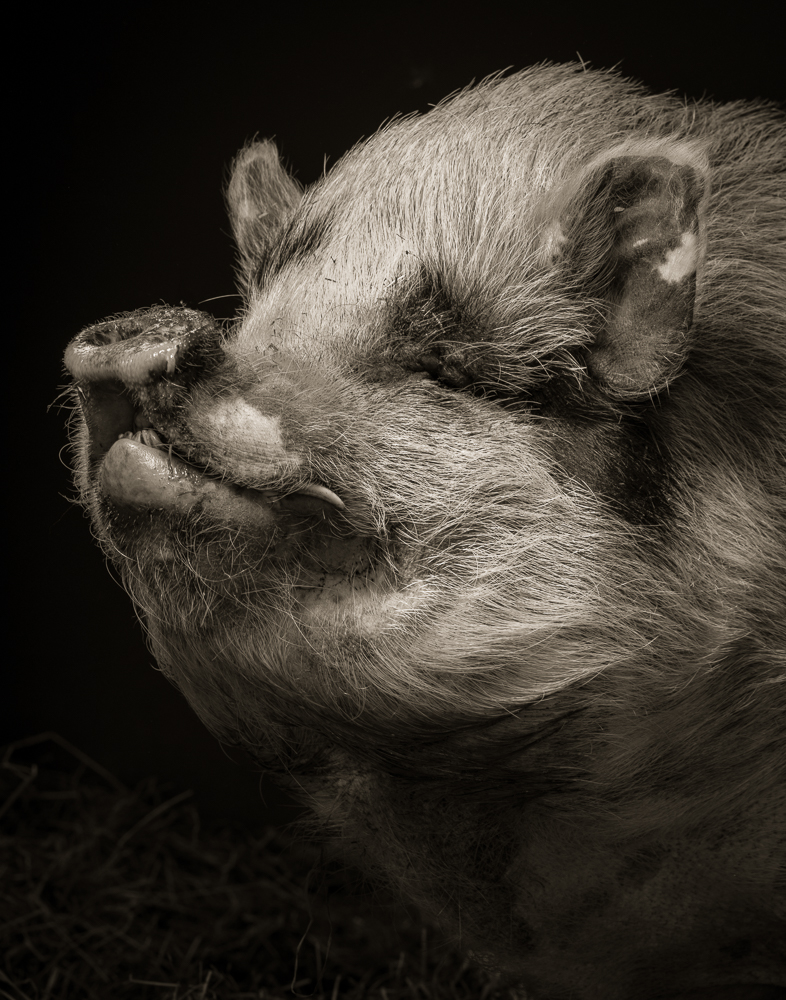 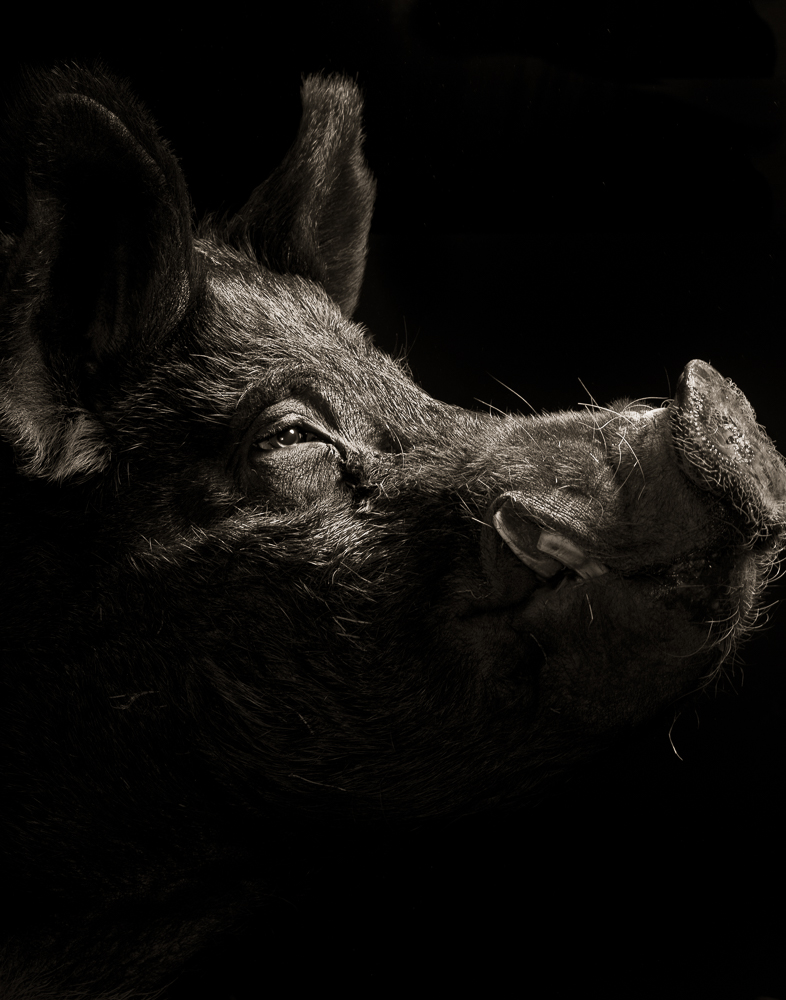 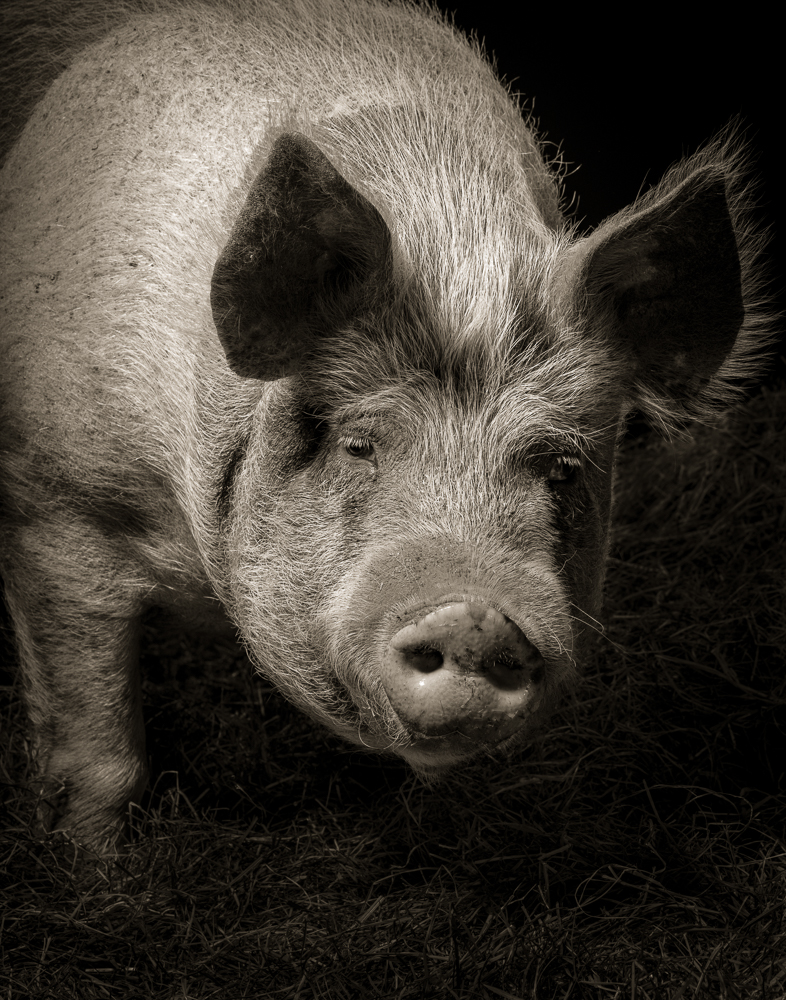 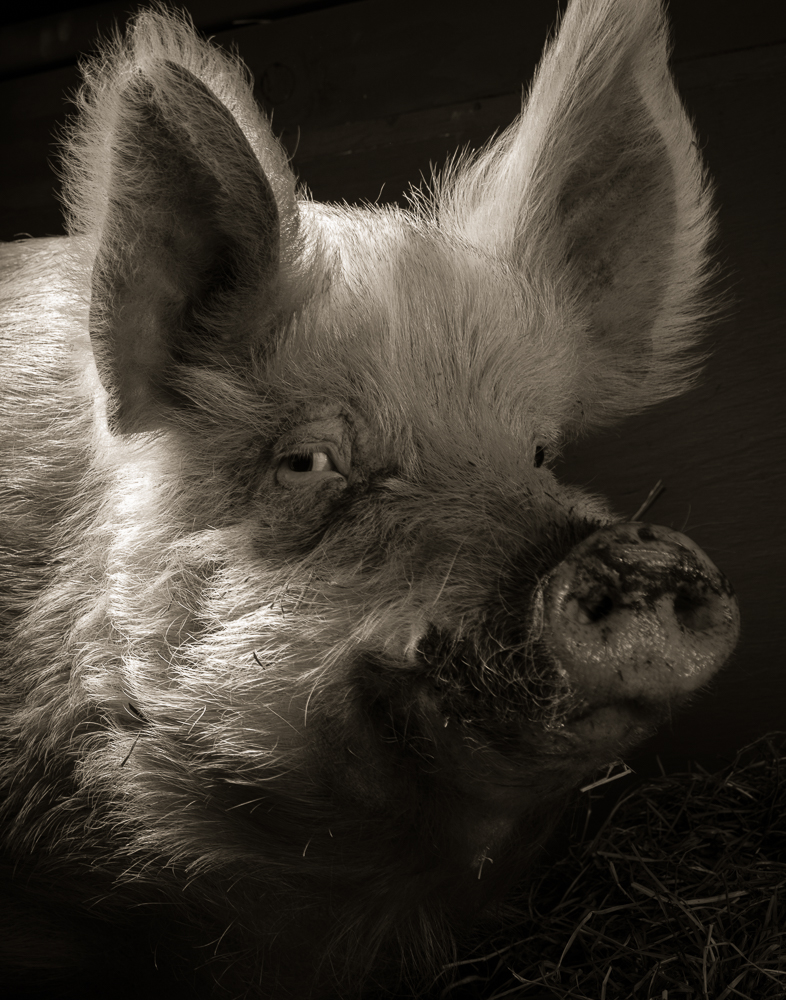 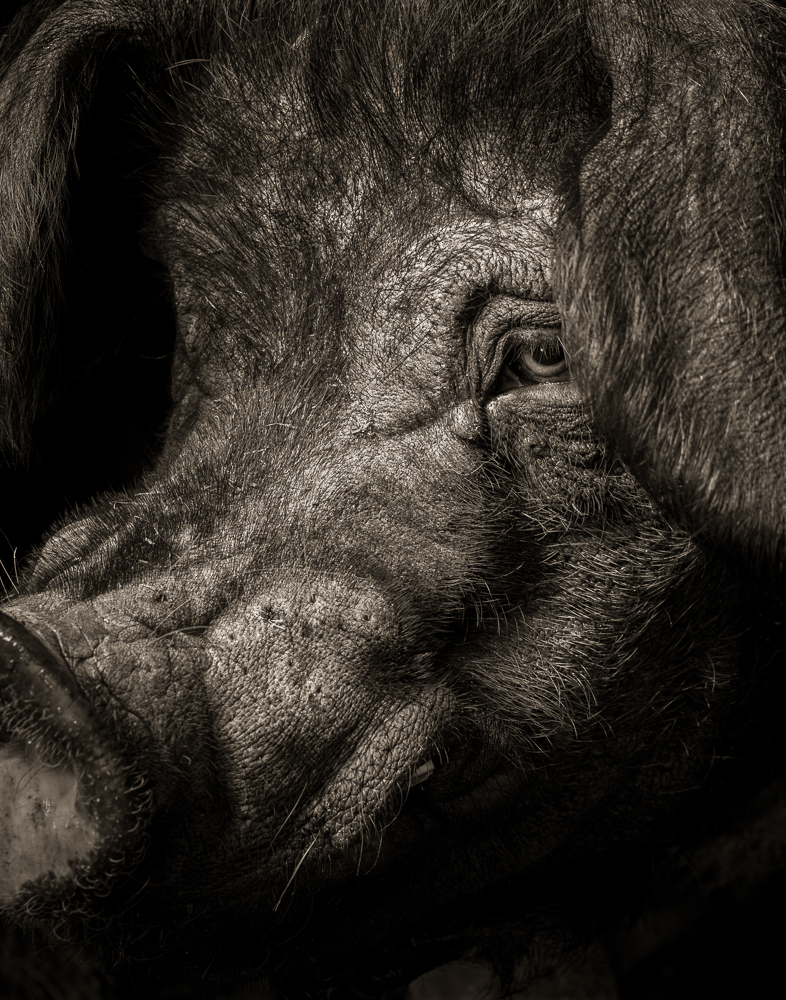 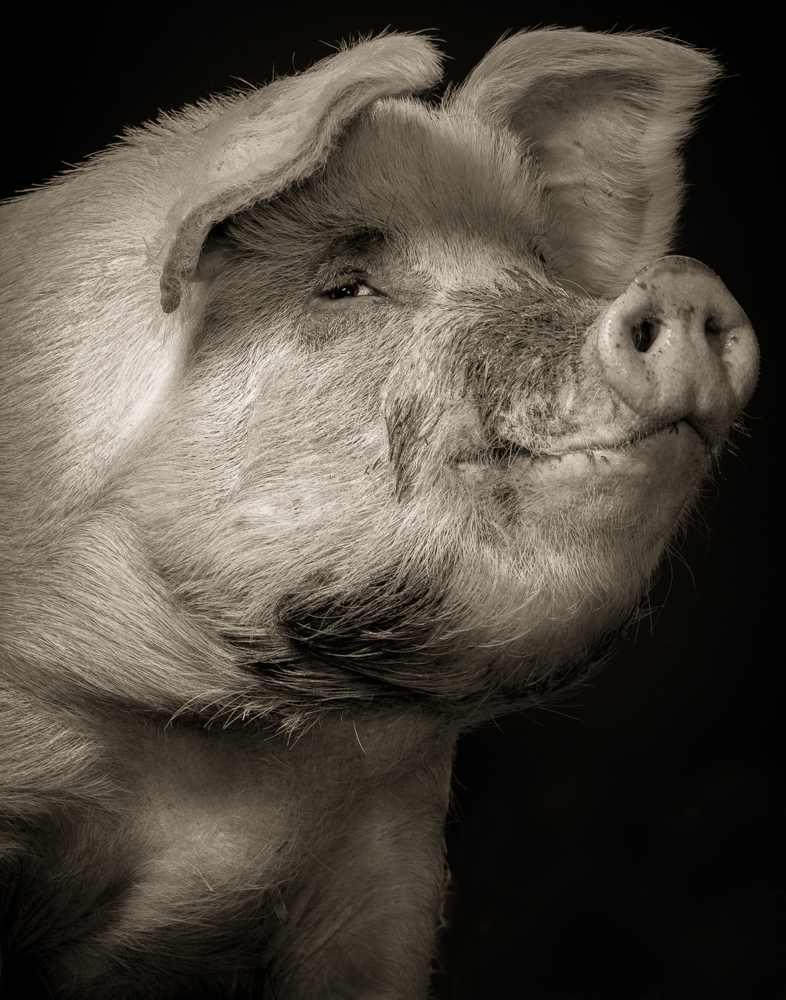