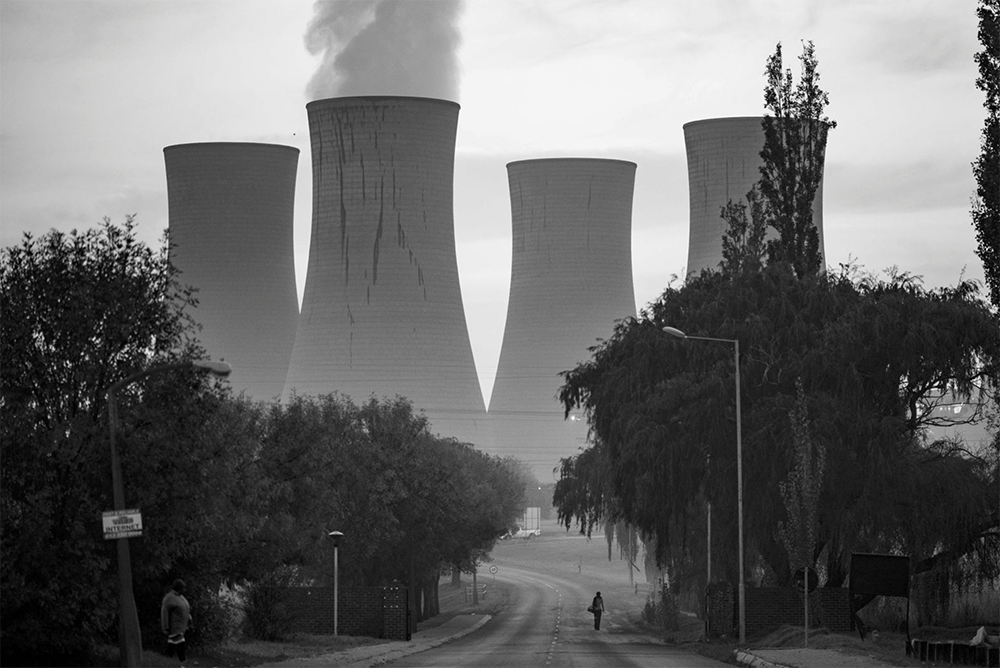 In this second iteration of “Focus on South Africa” I wanted to include features on photography platforms, collectives, and teaching organizations in addition to artist profiles. In South Africa many photographers do not begin or advance their careers in secondary institutions, but rather through organized workshops, short courses, and extended mentorships. And while many Americans may be familiar with groups such as the Johannesburg-based Market Photo Workshop, a number of others have been established in recent years that are impacting the photography landscape in South Africa. These groups–and the networks of educators and mentors that work with them–are representative of a long-standing pattern of investing in and committing time to future generations of image makers that extends back to the Struggle era of the 1980s and 1990s and an “each one, teach one” practice among photography professionals. By learning more about the work of these groups we gain insight into the interests and concerns animating early-career photographers in South Africa, many of whom come from disadvantaged backgrounds that are traditionally underrepresented in the field, and who could not pursue the medium absent the support of the groups such as those profiled here. Two of the artists featured this week — Tshepiso Mazibuko and Jansen van Staden — have developed their work with support of Of Soul and Joy and Photo:, respectively. – Meaghan Kirkwood 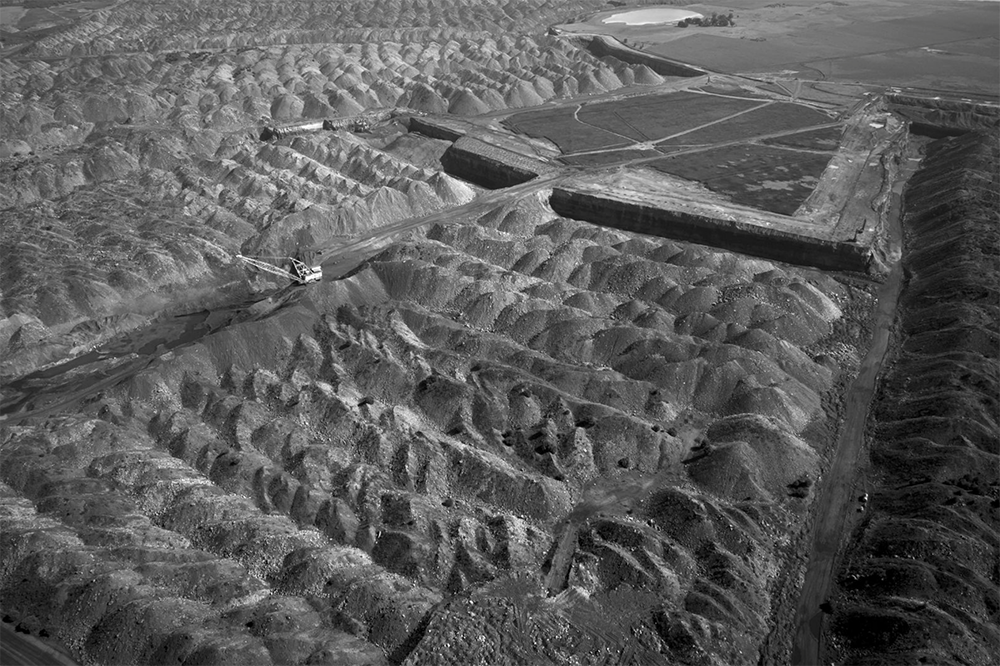 South Africa’s Mpumalanga province supplies more than 80% of South Africa’s coal reserves and contains the highest concentration of coal power stations and liquefaction plants in the country. Outside estimates made using satellite images suggest that Mpumalanga has some of the highest levels of air pollution in the world, including alarmingly high nitrogen dioxide and sulphur dioxide emissions. The gravity of the situation for local communities becomes apparent in Daylin Paul’s photographs: residents are dwarfed against a backdrop of cooling towers, exhaust encircles and obscures the rural landscape, and tailings block public views of mines. Throughout the series of landscapes, environmental portraits, and documentary photographs a tension between the seen (industrial structures, ruins of displaced communities, townships adjacent to power plants) and the unseen (toxic particulates, tainted air) animates the photographs. The black-and-white, picturesque landscapes interlaced with horrific content are captivating and alluring.

Daylin Paul’s “Broken Land’‘ series grew out of a freelance assignment for the Sunday Times that brought him to the resource-rich province of Mpumalanga, just east of Johannesburg. Paul, who grew up in Durban and studied in the Eastern Cape, was not previously familiar with the region and its industrial landscape. “Being in that place with the sheer amount of pollution and what was going on there,” he says, “it made an impression on me and I kept trying to find ways to go back.” With the support of the prestigious Ernest Cole Award–which provides a stipend, mentorship, book publication, and travelling exhibition—Paul was able to return to the area repeatedly over the course of the year and delve deeply into his project. “I was down to my last 200 Rand and it cost 160 Rand to courier the application, so I said ‘well I’m going to try, and if this doesn’t work, I’ll take this as a sign to kind of give up on photography.” 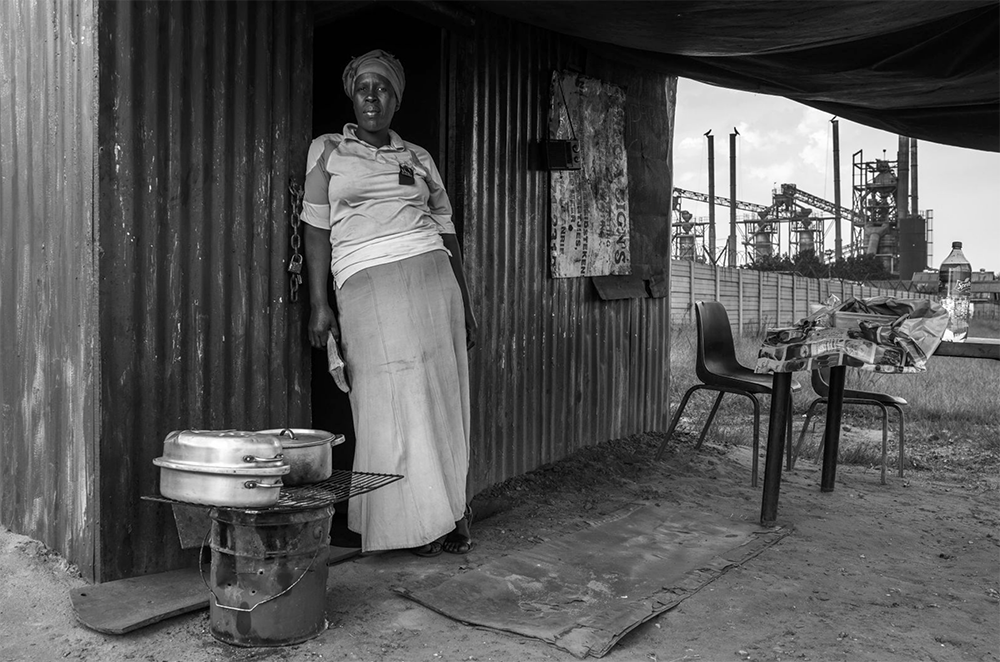 ©Daylin Paul, Dina Mahlangu makes R400 a week selling food to workers at the coal facility behind her. She uses coal that falls off trucks to cook the food. Polmaise township outside Middelburg. 2018.

Paul began his photographic career studying to be a photojournalist. “I wanted to be a photographer from the age of 16,” he says, and “I convinced my mom to let me study journalism; it wasn’t an easy thing for an Indian kid to move out of, like science or technology or computers or medicine.” Paul was inspired by the work of photojournalists he encountered in magazines, including work made during the Vietnam war. Images such as the iconic Nick Ut photograph of Phan Thi Kim Phuc, known widely as “Napalm Girl,” deeply impacted Paul. “This image has the power to travel through time and space;” he recalls, “it’s twenty years and the other side of the world later but I can look at this and I can say that no matter what anybody’s reasons are, what’s happening here is wrong.” From there he realized that this was what he wanted to do: “my interest in photography from the very beginning was always linked to truth telling.” Paul was also influenced by South African photographers such as Cedric Nunn, Alf Khumalo, and Ernest Cole—artists who he felt were doing larger, more sensitive work about the impacts of apartheid. “I preferred the stuff that showed what people were fighting for during apartheid–what communities looked like, whether they be Indian communities, rural black communities, urban black communities, and why people were prepared to sacrifice so much in order to bring some sort of a change.” 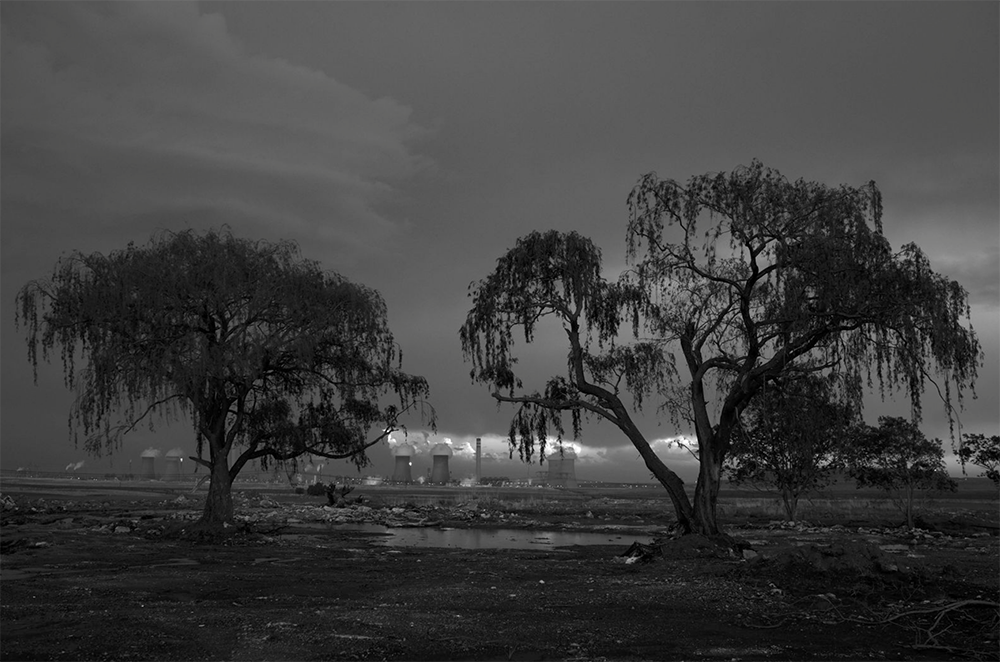 Paul pursued a number of strategies in his effort to reveal the extent of coal’s impact in Mpumalanga. The book opens with a selection of landscapes, aerial photographs, and an image of a displaced village. The aerial photographs show the close proximity of settlements and power plants, tailings that run parallel to main roads, and whole acres reshaped into piles. An exploration of air and visual play with its form follows: a dust storm, billows of water vapor, and heavy clouds. In the following pages Paul presents environmental portraits of residents, many photographed outside their homes, always against a backdrop of smokestacks and cooling towers. Of his approach Paul reflects that he tried to “make landscapes that were portraits, and portraits that were landscapes.” In his portraits he draws upon what was around the subjects to convey meaning; in his landscapes he wanted his viewers to read a story from the surface and its content, just as they would a wrinkle on a face or stain on a hand.

The final edit of Broken Land came together in a small folio, just a bit larger than a letter-sized piece of paper. For Paul, keeping the size and costs of production costs down would increase the mobility of his series, and help get it into the hands of more stakeholders. “I wanted a book design that was small enough to fit into a backpack; it was never meant to be a coffee table book like something exclusive,” he recalls. “I wanted it to be something that activists as well as academics as well as journalists could use as a reference” and so it could act as a resource and “not just some sort of trophy or collectible.” 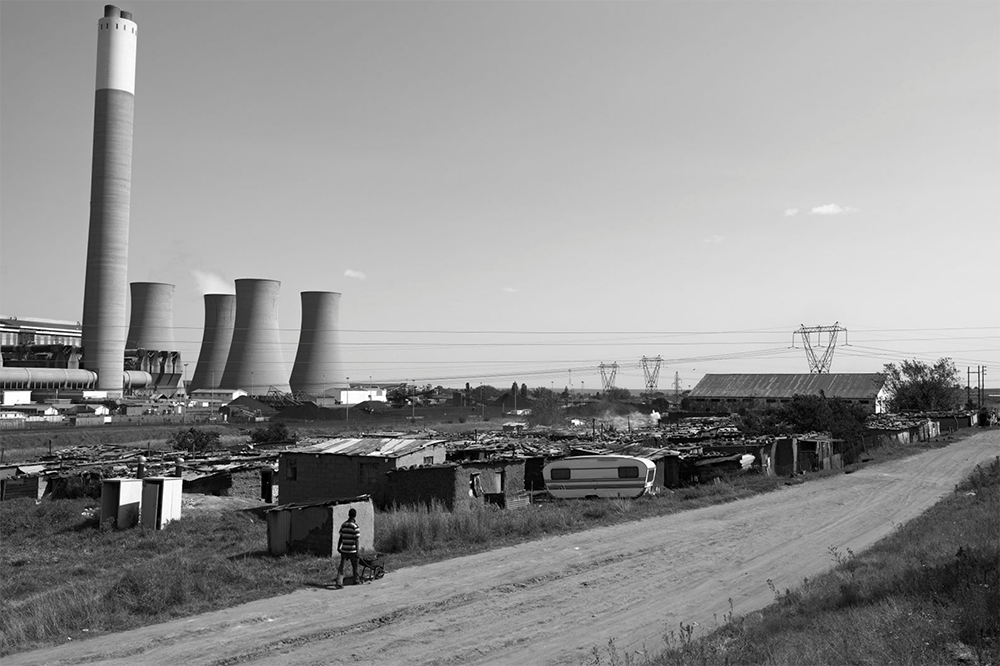 Towards the end of our conversation I asked Paul if there was anything that he’d like an American audience to know about his work. He thought for a minute before reflecting on the history of the Sasol company, which was once owned by the apartheid government and is now a publically-traded company that is now completing a 13-billion dollar petrochemical complex in Lake Charles, Louisiana. The same kinds of facilities that first inspired a sense of awe and fear in him are not unique to South Africa and they could have a similarly devastating effect on your environment, he reminds me; “it’s an old archaic technology and we need to do better.” 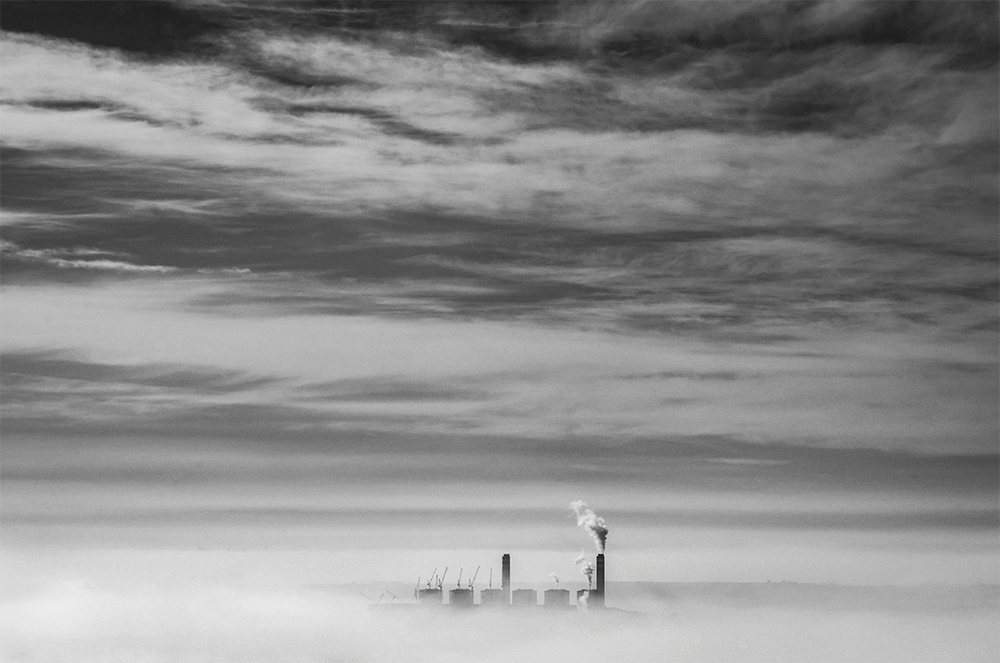 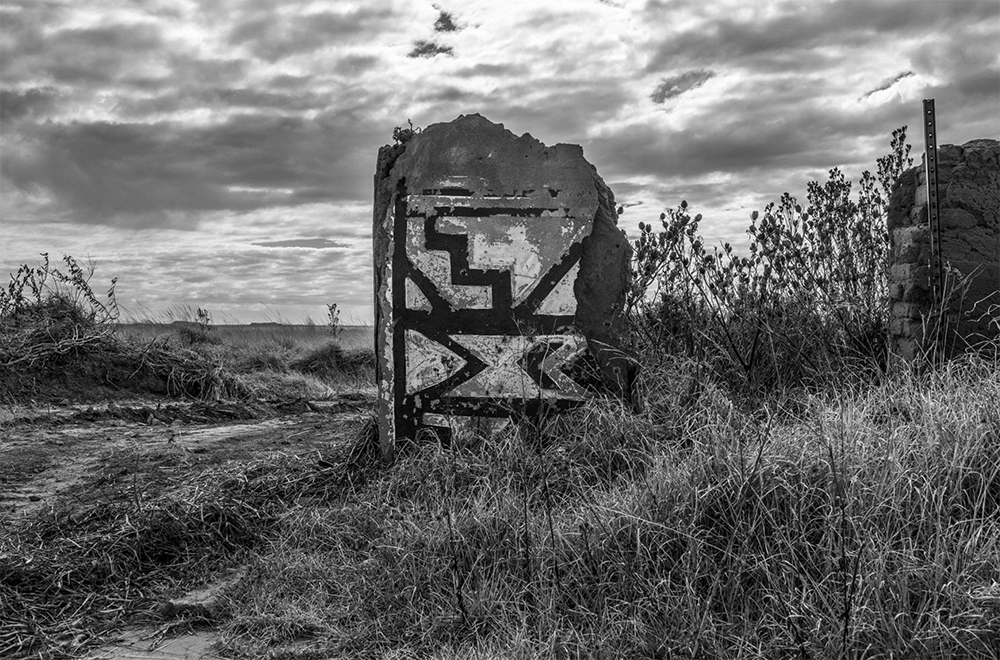 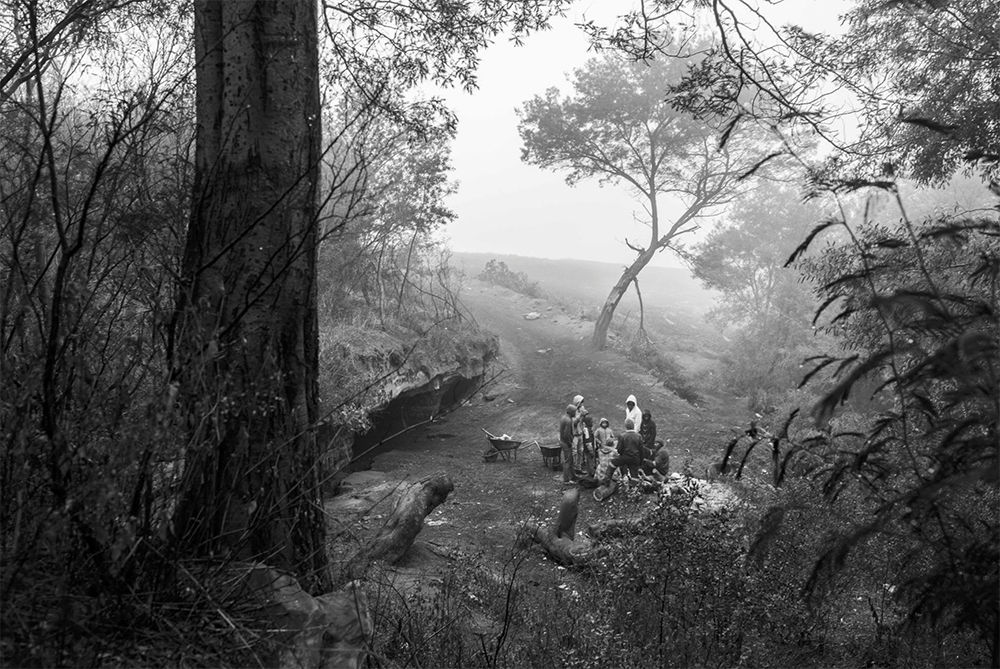 ©Daylin Paul, Subsistence coal miners huddle near a fire in the early morning at the entrance to the communitymade coal mine. Ermelo, 2018 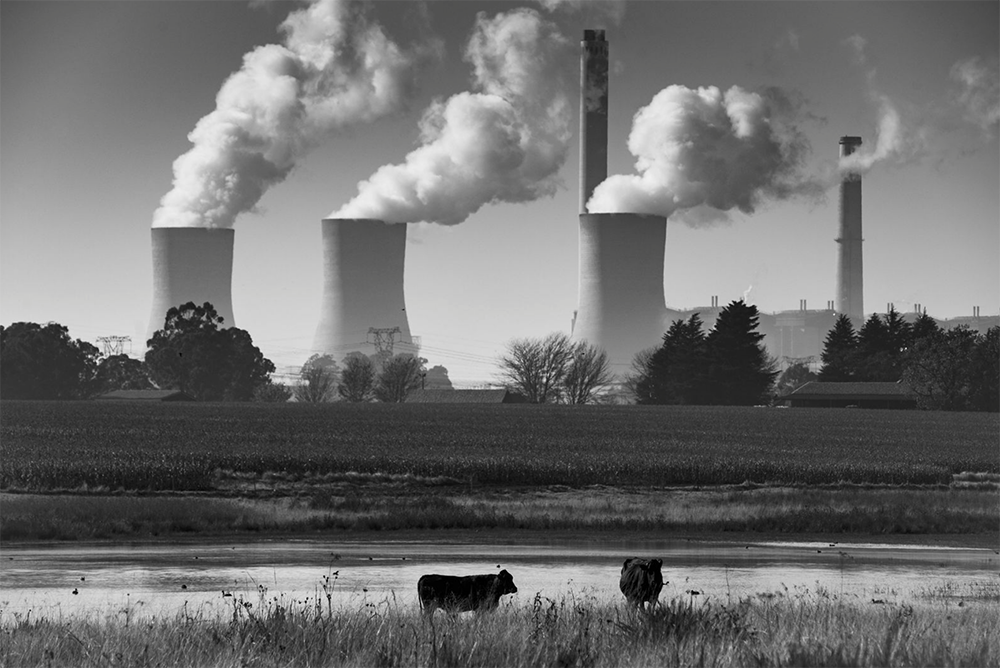 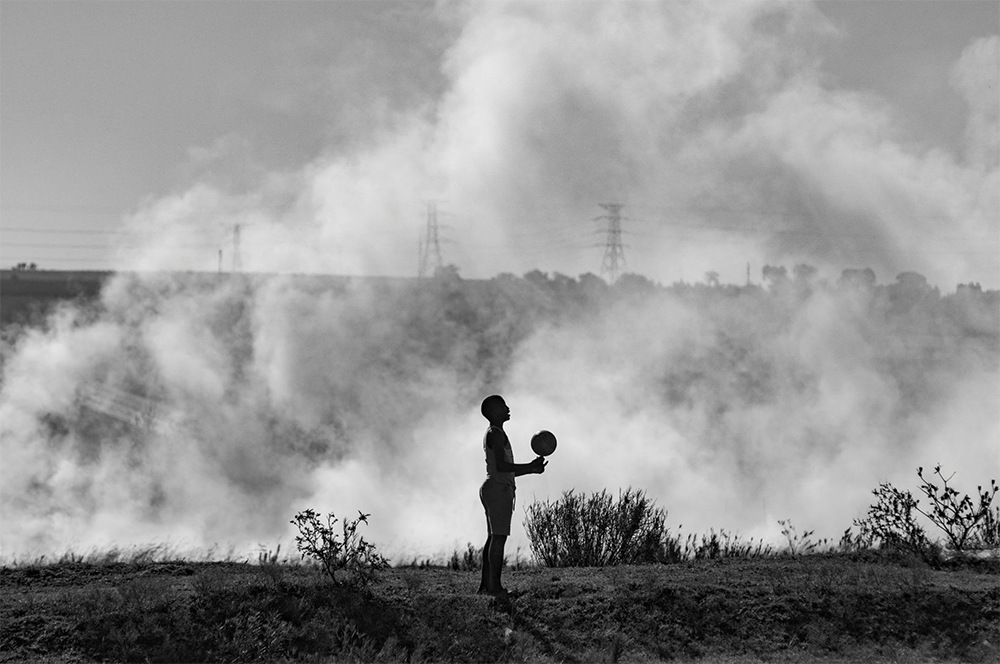 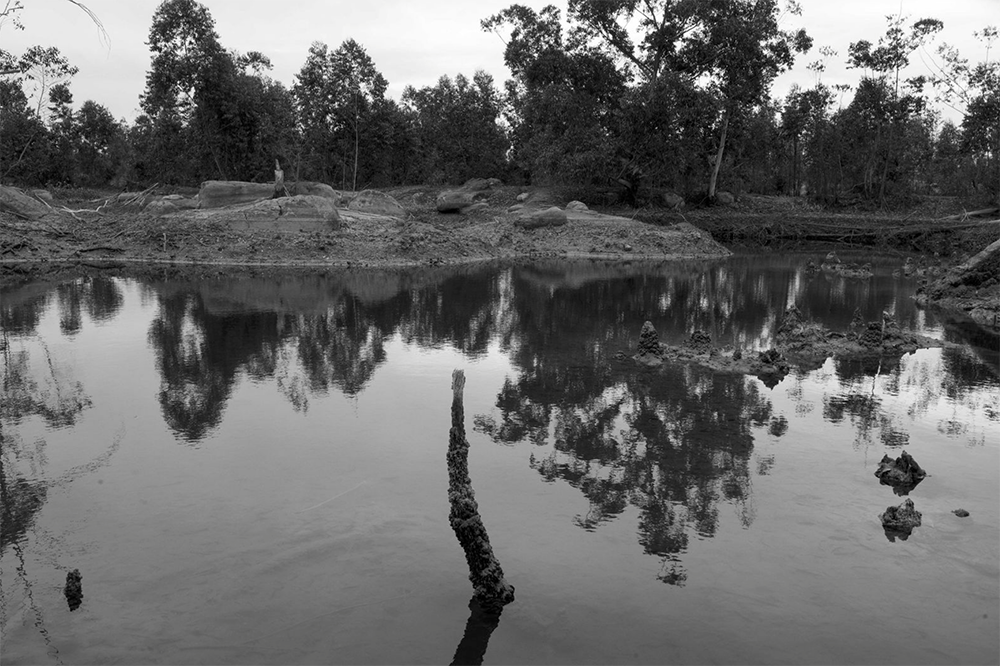 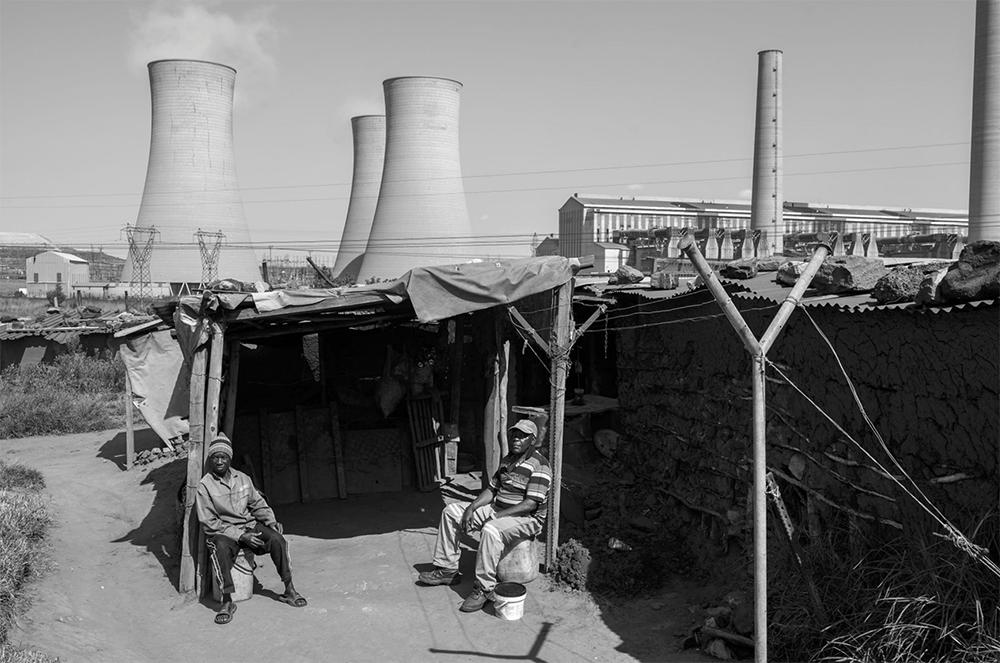 Daylin Paul is an independent photographer, writer, filmmaker and educator based in Nelson Mandela Bay, South Africa. He is a graduate of Rhodes University’s School of Journalism.

After starting his career as a press photographer in Cape Town, he decided to work independently and travelled to east Asia where he was, amongst other things, a photographer for Penta Press photo agency in South Korea, and a gallery assistant at Documentary Arts Asia in Chiang Mai, Thailand. As a volunteer he documented the living conditions of northern Thailand’s rural indigenous minorities for the Life Skills Development Foundation and independently produced a short documentary film which helped secure funding for their continued work in the region. To learn more about Daylin Paul and his work you can access his website and follow him at @daylinpaul on Instagram.

After five years in Asia, Paul returned to South Africa and worked for various leading news organisations, while teaching in the Photojournalism and Documentary Photography programme at the Market Photo Workshop. His work during the Fees Must Fall protests in 2015 and 2016 drew critical acclaim and global recognition, and was published in titles including The New York Times, The Guardian, and Foreign Policy. Subsequently, he was a regional finalist in the Vodacom Journalist of the Year awards (2017).

It was during this time that he began moving away from journalism and into documentary work. Paul won the prestigious Ernest Cole Award in 2017 for his personal work on coal mining and burning in the Mpumalanga Highveld. The resulting project was published through Jacana Media as his debut monograph, Broken Land, and exhibited at Wits Art Museum, KZN Society of the Arts and FORMS Gallery. It was long listed for the Humanities and Social Sciences Award in the category of Best Monograph. A virtual exhibition was released together with the Center for Environmental Rights in 2020.

Most recently, his work covering the COVID-19 pandemic was a part of the Seoul International Photojournalism Exhibition: 2020 Seoul of New Hope and he was invited to participate in the New York Portfolio review 2021 edition.

He teaches photography and videography, and is a writer and contributor to numerous publications, NGO’s and development agencies from grassroots to global. Follow him on Instagram:@daylinpaul

NEXT | Raymond Thompson: In/Visible >
< Focus on South Africa: The Through the Lens Collective | PREV