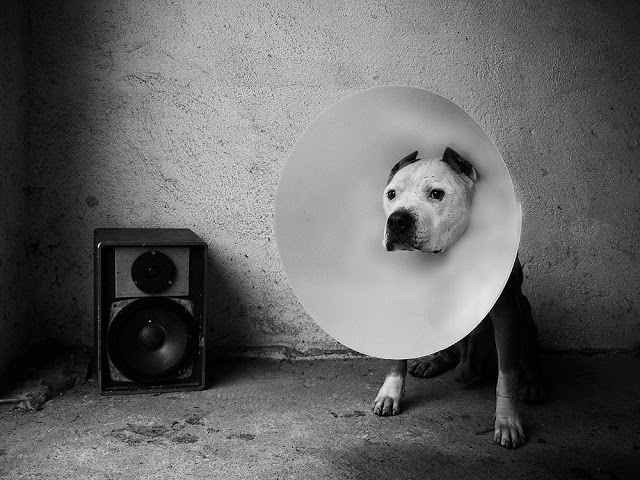 Hajdu Tamas is a veterinary doctor who specializes in laboratory diagnostics. Ever since he was a child he was surrounded by the visual arts and photography. His father was an amateur photographer, sculptor and painter. Having been gifted enough for sculpting and painting, but feeling the urge of expressing his creative energy, Hajdu discovered and ended up loving photography which he began taking seriously around 2005. He has never formally studied photography.

As a child I was fascinated by the world of laboratories, this mysterious place, impossible to comprehend by the outsiders, a place where you can always discover something extraordinary. I always saw this hidden place as a fertile ground, a perfect environment to grow the grain of creation that I felt in my soul since childhood. Animated by a creative effusion, I used to change the childhood games into activities based on what I saw in the laboratories. Under my father’s careful supervision I used to do physiological experiments on frogs and I even got to create (a pair of) unicellular twins of crested newts. My passion regarding all the instruments needed in a lab resulted in several collections of test tubes and bottles in all shapes and sizes, up to rusted surgical instruments. At some point I had an impressive collection but it all disappeared in time. Those were times when I was strongly influenced by authors like Jean-Henri Fabre or Gerald Durrell, fascinated by the worlds of the living things they described in their works. 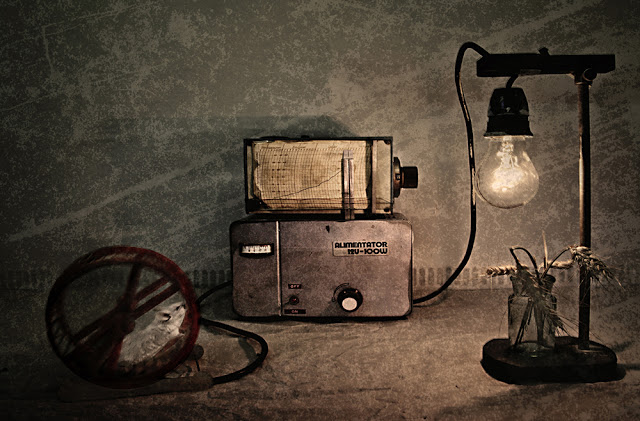 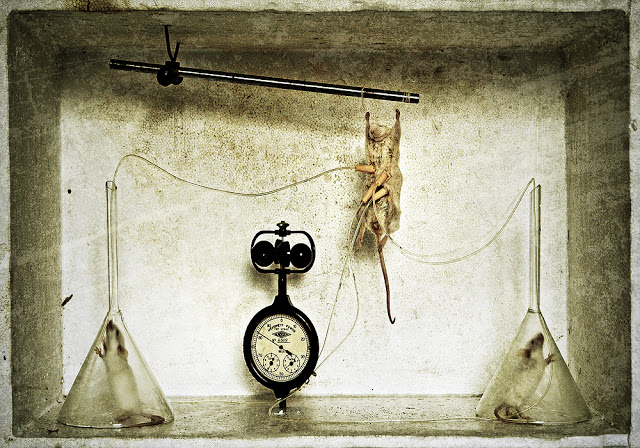 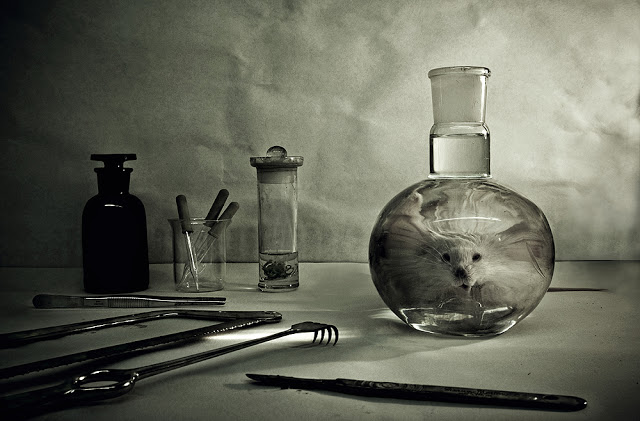 Caput
My specialty in veterinary medicine is the diagnostics of prion diseases. The deer that are hunted in my lab’s territorial jurisdiction have samples of their brains tested. I have worked on hundreds of beautiful specimens and as each one lay on my autopsy table, I felt an emptiness, though perhaps not as profoundly as the forest might feel its loss. Initially, I photographed these deer for documentary purposes. One day a hunter posed with a deer’s head and it inspired me to create this series. 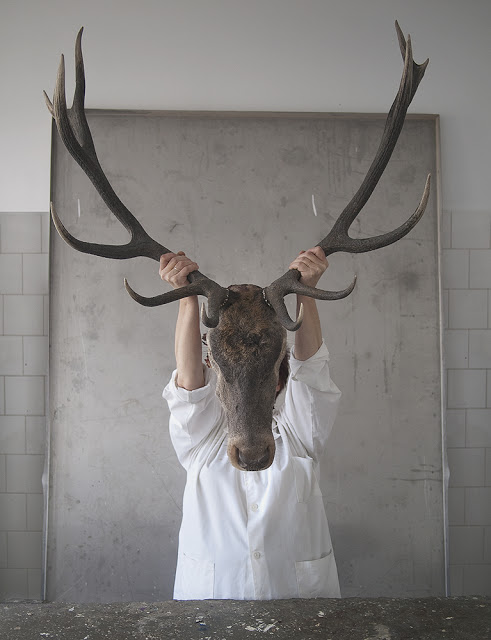 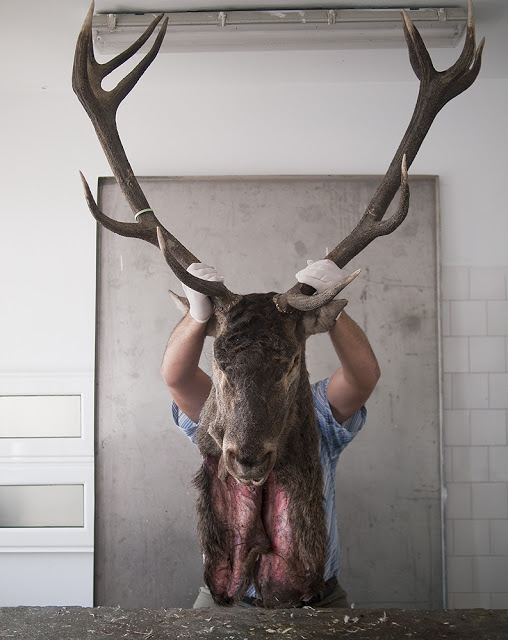 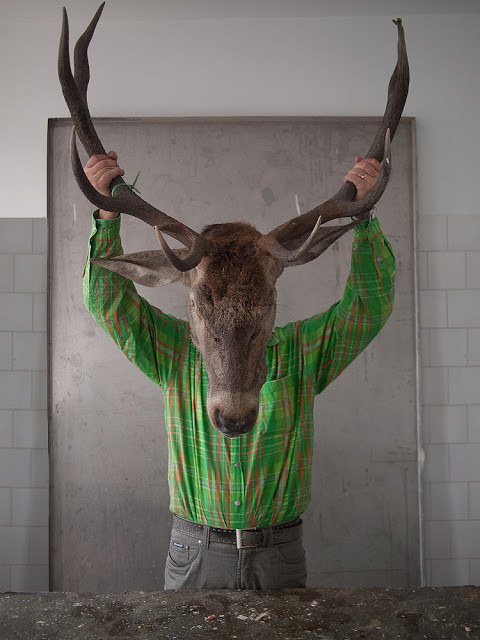 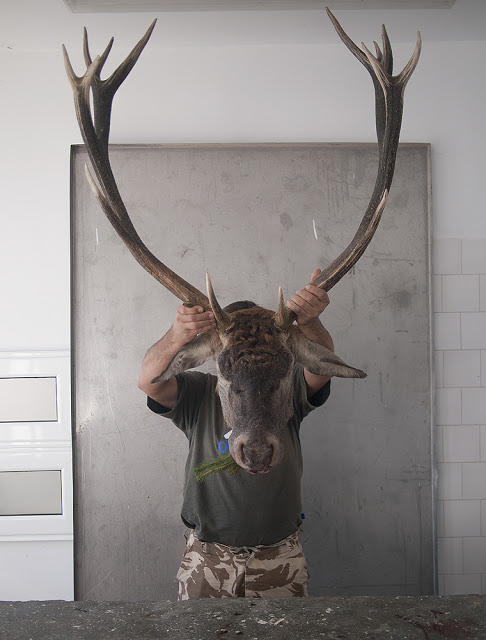 The domestic dog, Canis lupus familiaris, is the only creature in the animal kingdom which has the word “familiaris” in its Latin denomination, not by coincidence, the dog belonging to the family and being a full member of it.
They say that a dog is man’s best friend, that their friendship can be confirmed only by those who have a dog as a comrade.

Due to the Romanian social and economic context, it is very easy to find them in the streets. They ended up being a real danger to people, and in all the years that have passed since the Revolution, no real solution has been found to solve this situation. No city has an efficient animal shelter, able to collect the stray dogs, so the streets, especially the alleys between the apartment buildings, are full of them. 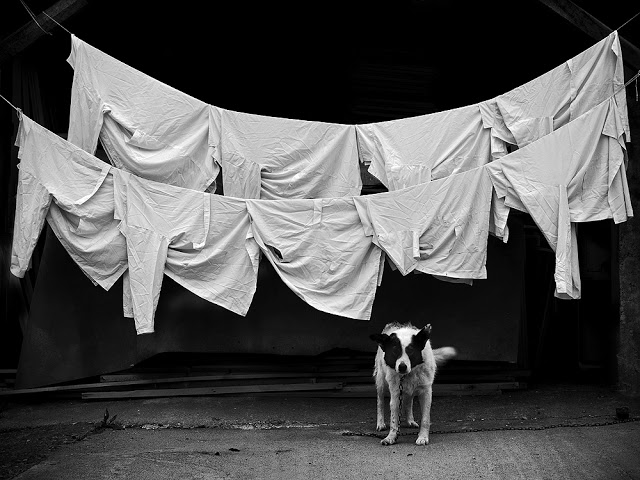 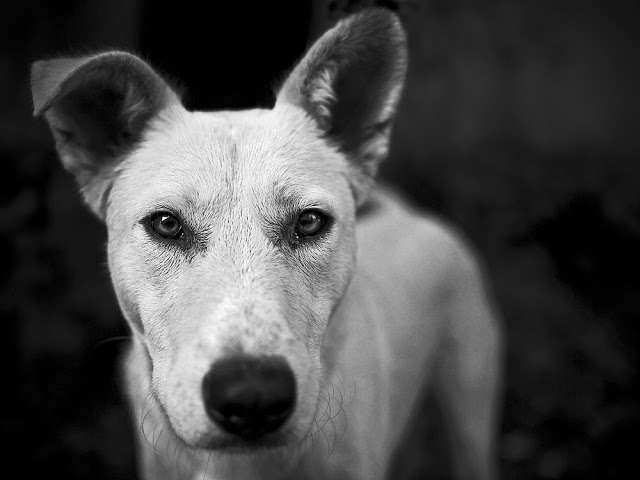 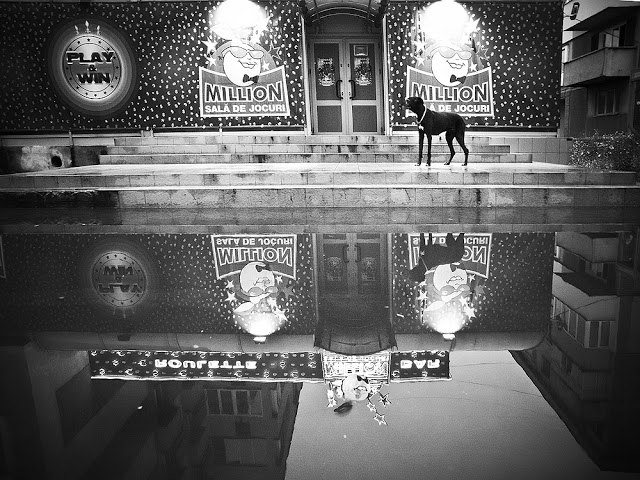 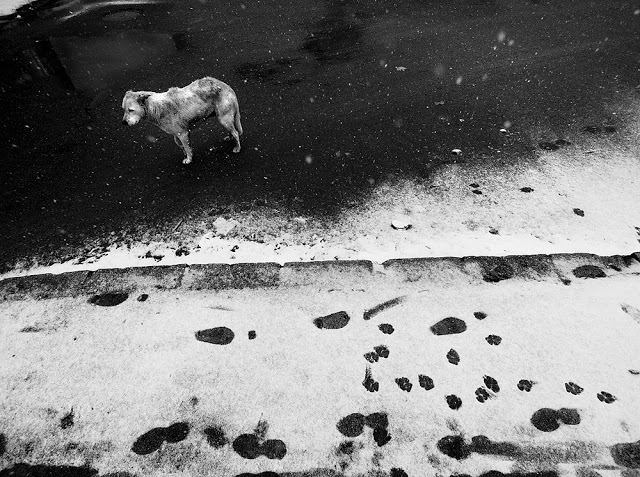 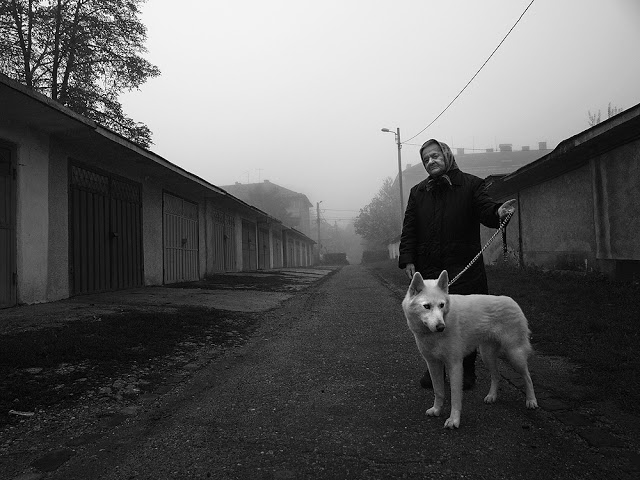 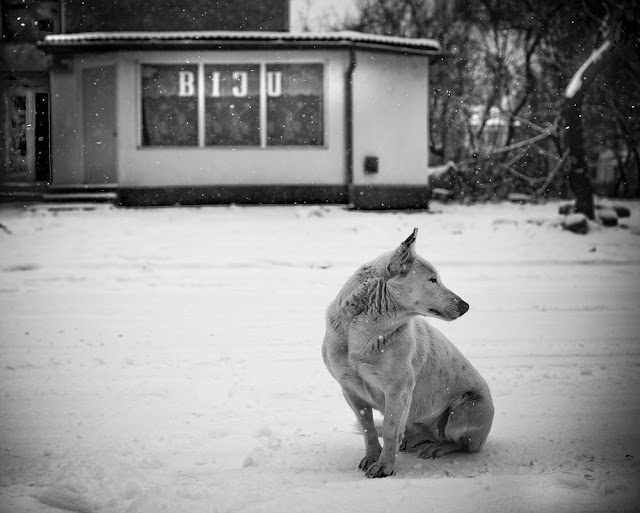 The paint is falling off the walls; the old epochal cars are disassembled, and disoriented dogs are walking like ghosts through the dirty snow; but let’s not envisage that everything is part of a decaying surreal painting.
There is always somebody that can repaint a chipped wall, and through practical miracles ruined cars can be transformed into brand new ones, total makeovers are still possible with a little bit of imagination.
I depict the everyday life in my eastern European neighborhood, bits and pieces of a decomposing existence with its highs and lows, revealing its dual nature: the laissez-faire attitude complemented by a strong willingness to change its fate. 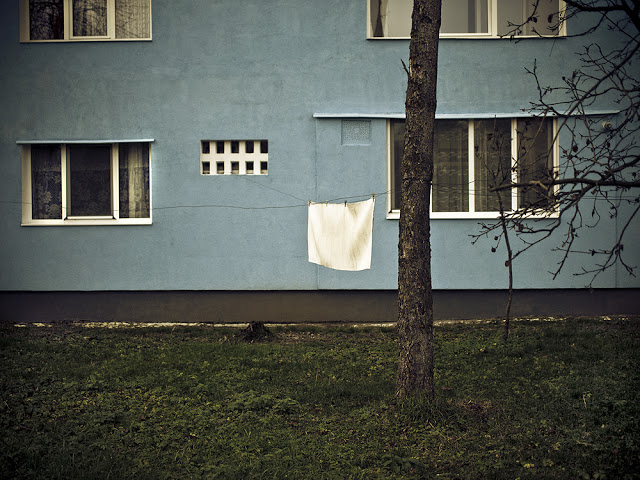 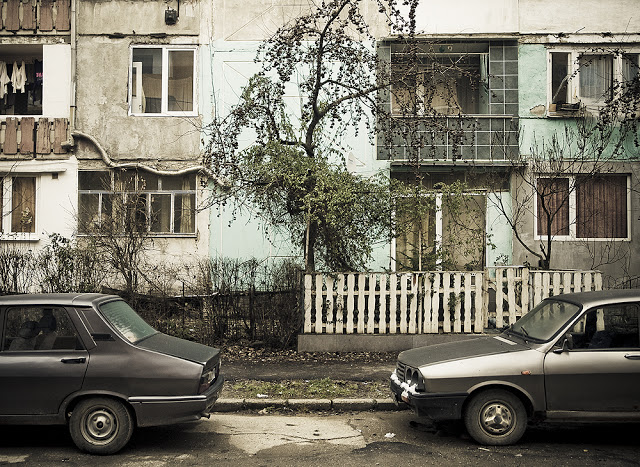 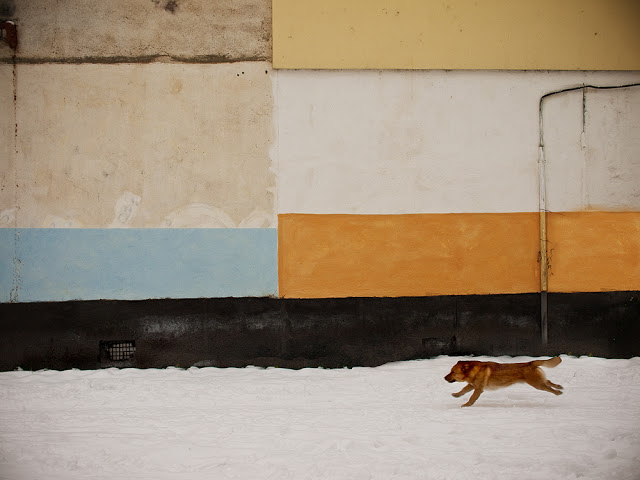 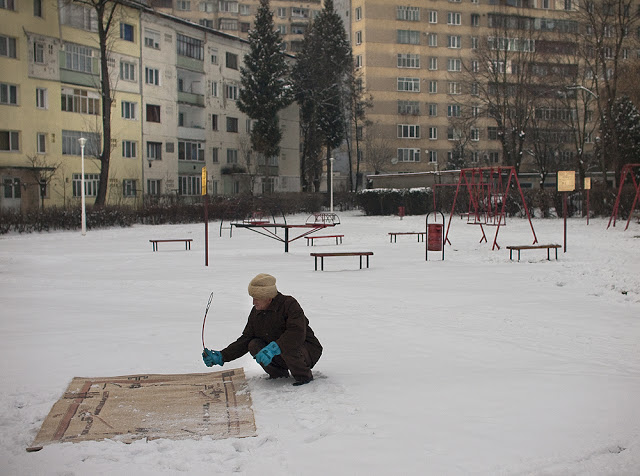 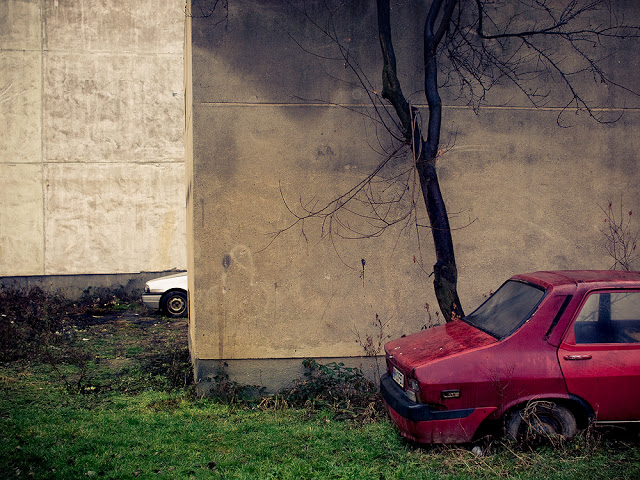 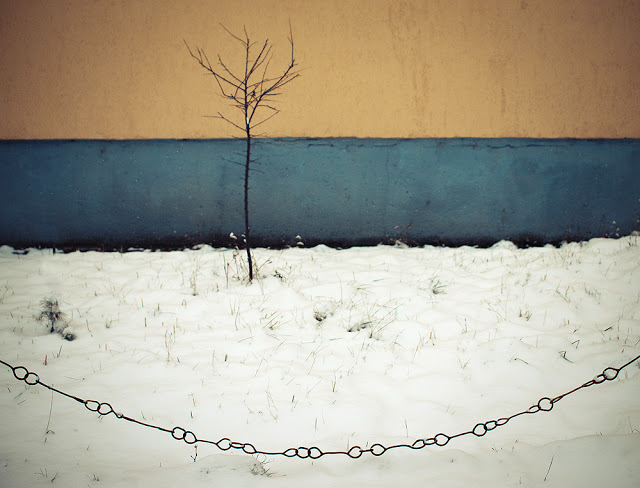