Looking at work seen at the Filter Photo Festival in Chicago 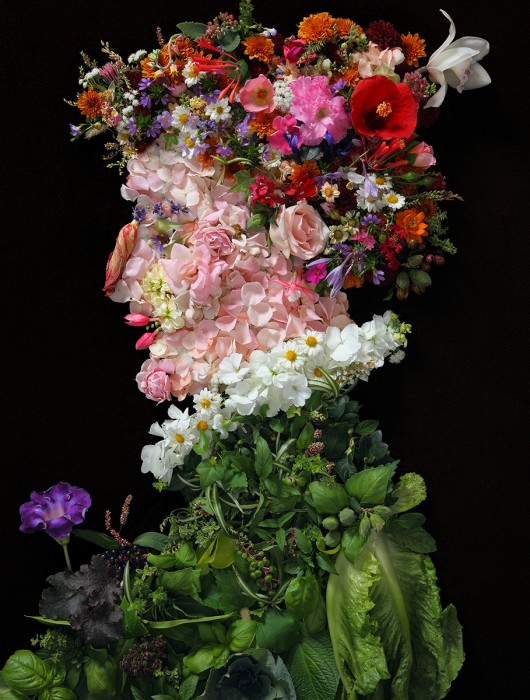 I am always intrigued by photographs inspired by paintings, and Klaus Enrique arrived at Filter with a portfolio of large scale masterpieces of his own. His photographic constructions were inspired by the 400 year old paintings of Giuseppe Arcimboldo. 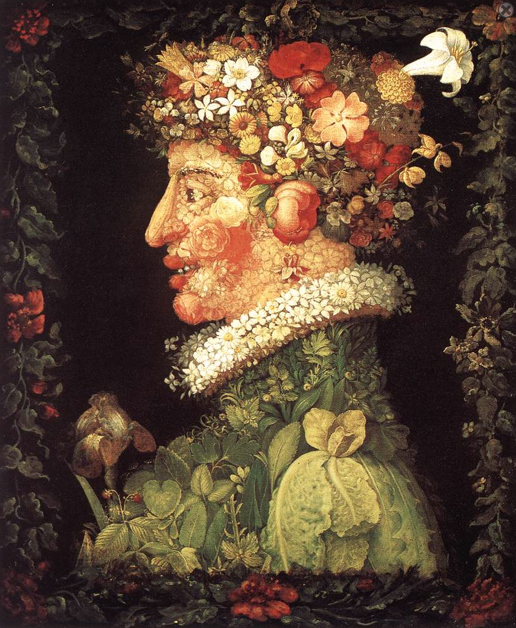 His work is a refreshing look at the still life, created with humor, creativity, and news ways of seeing and though Klaus is inspired by Arcimboldo, he definitely has his own vision and sensibility as evidenced in his newest piece, Terminator: 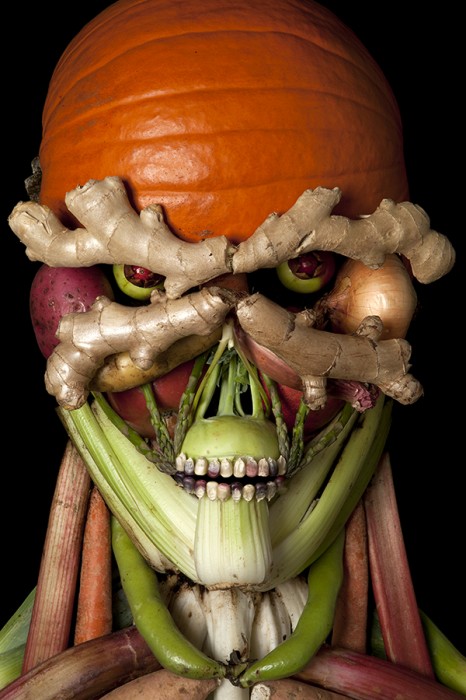 Klaus grew up in Mexico City. He studied genetics at the University of Nottingham, England, and received an MBA from Columbia Business School in the City of New York. Most of his professional career was spent as a freelance IT consultant before Enrique turned to photography, which he studied at Parsons and at the School of Visual Arts. Enrique began to receive worldwide attention in 2007 when his portrait of “Mother & Daughter” was short-listed for the Photographic Portrait Prize at London’s National Portrait Gallery. Enrique had his first solo exhibition in 2008 and currently lives in New York City. 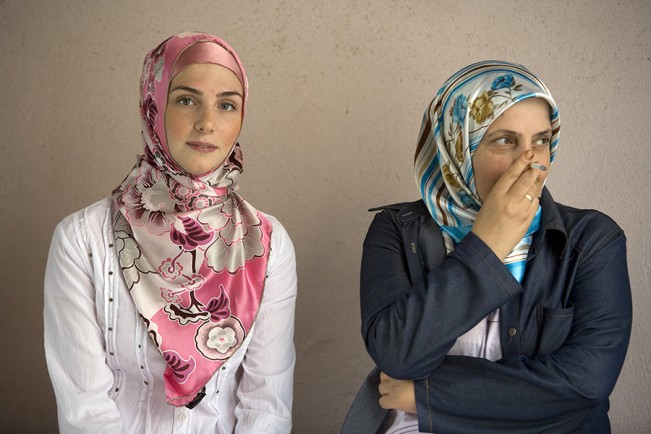 Klaus has recently opened a solo exhibition of The Archimboldo Series, under the title of The Reaping at the Rebecca Hossack Gallery in New York City.  The exhibition runs through November 6th, with an opening tonight, October 16th, from 6-8pm.

I had been working on a photography series in which I surround an isolated human body part with a large quantity of a certain object, when I was struck by the idea for this project. While I was photographing a human eye that was peeking out amongst hundreds of leaves, it occurred to me that I could actually utilize leaves to construct portraits or masks. I researched what other artists had created along these lines and discovered that, as usual, someone somewhere had already done something similar. In this case it was the artist Giuseppe Arcimboldo, who made paintings with this concept in mind over 400 years ago.

I decided to recreate Arcimboldo’s work, and eventually to create my own images with his paintings as inspiration. 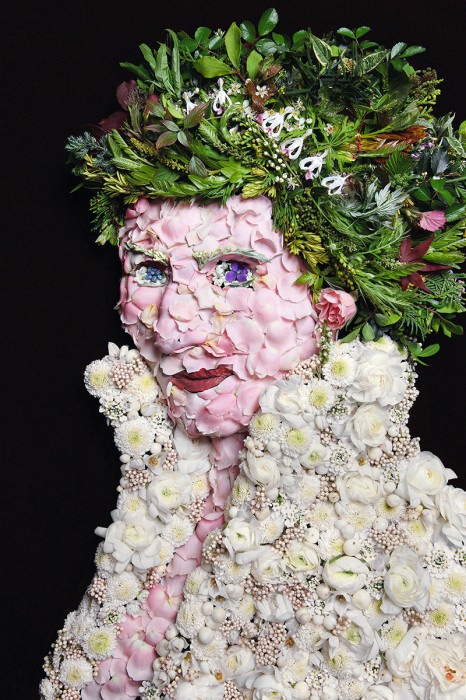 Making each sculpture takes about three days, and is a bit of an emotional roller coaster. In the beginning, I start to see everything take shape, and it is very encouraging. However, once the work gets further along and start comparing it to the original painting, I’ll notice some inconsistencies. Much has been said about how the subjects in Arcimboldo’s paintings are proportionally correct; but every single one of those items is imaginary, and I think he stretched them beyond reality in some instances. For example, in one of the paintings the nose is a small, yet perfectly shaped pear. When we were unable to find a suitable match, I decided to substitute the pear for a small sweet potato. After I make these types of changes, little by little the sculpture starts coming together. Days later when it finally resembles Arcimboldo’s original, it’s incredibly rewarding. 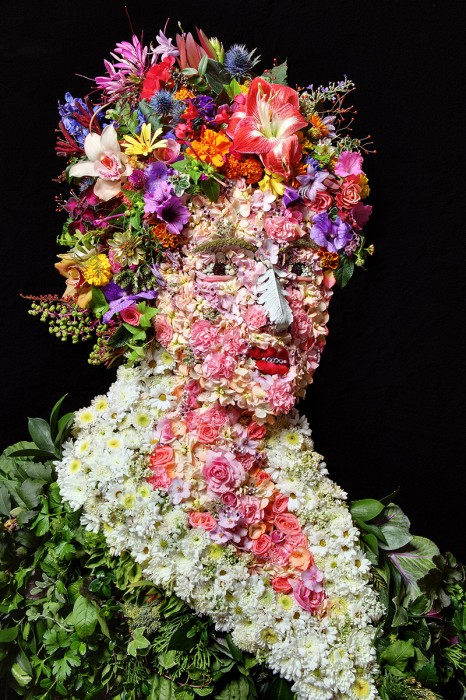 Although most recognize the images immediately as portraits, there are many people who do not. At first they only see the individual parts of the image: the fruits, flowers, and vegetables. But after looking at it for a while, they realize that it’s a portrait of a person. To see that thought process being played out in real time is very satisfying to me because it mimics the thinking behind the art: that simple organic objects come together to create something more meaningful than the sum of its parts. 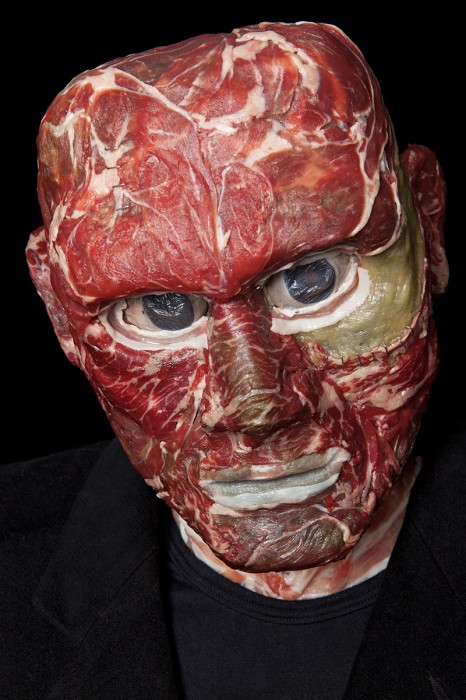 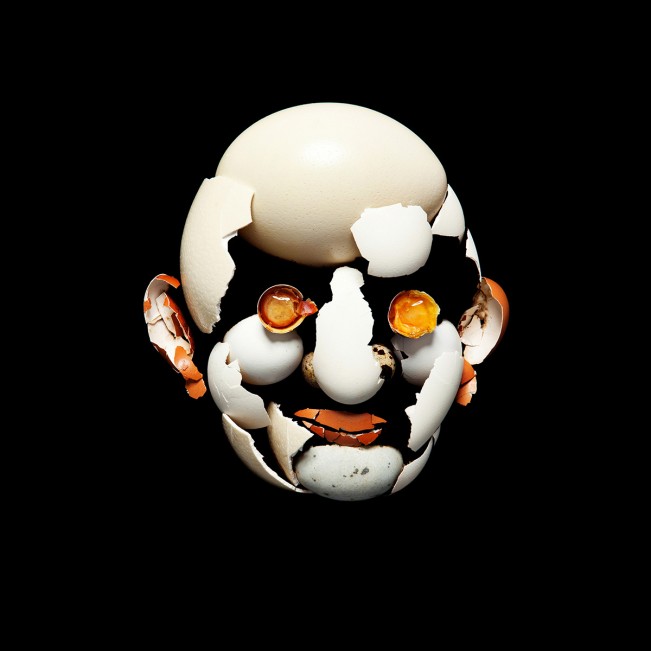 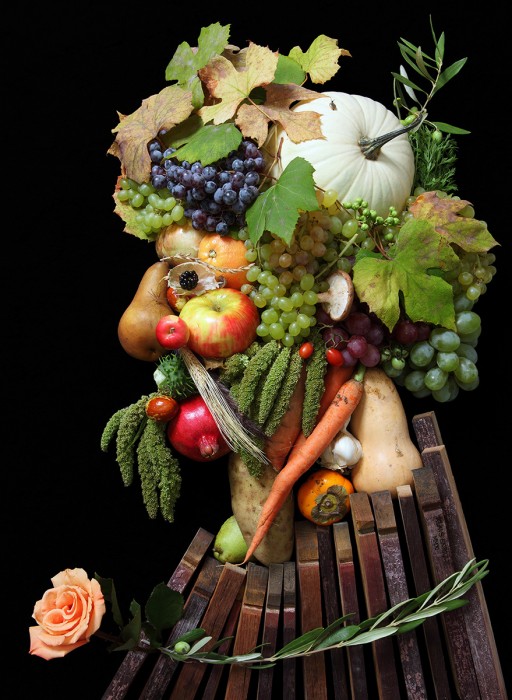 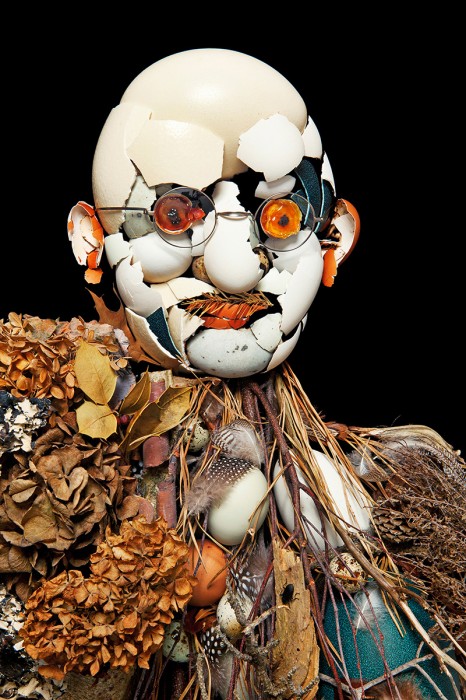 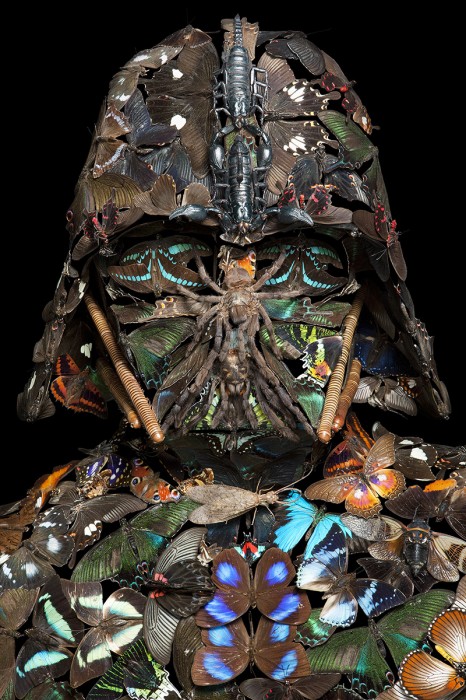 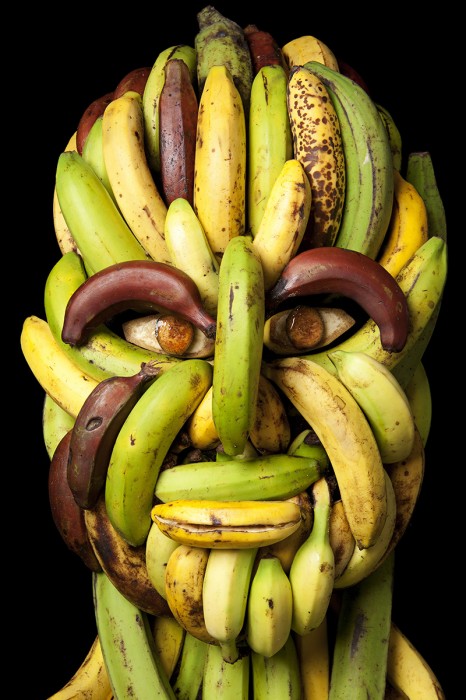 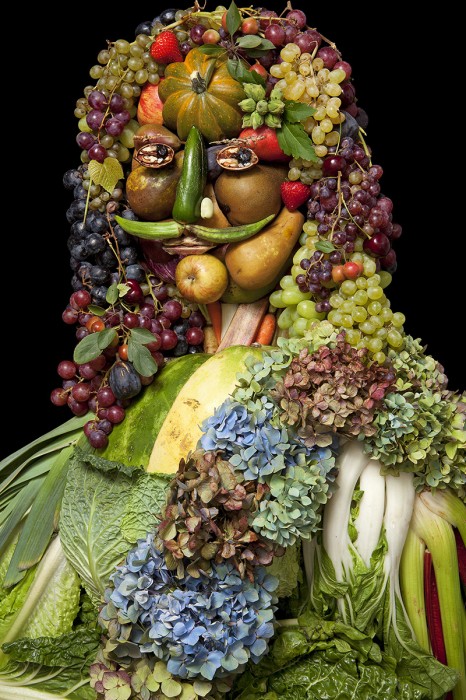 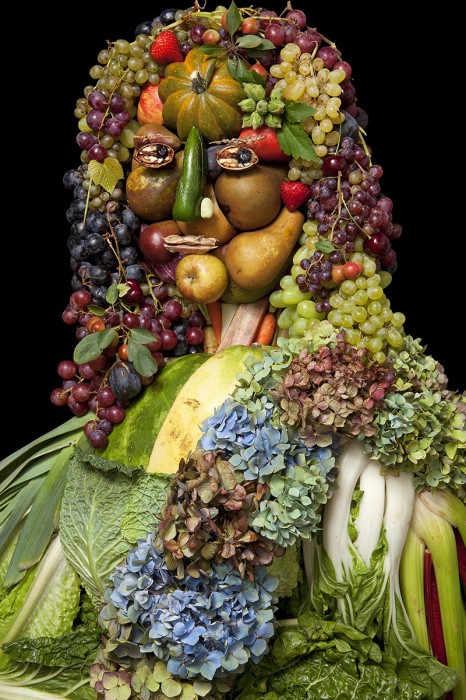 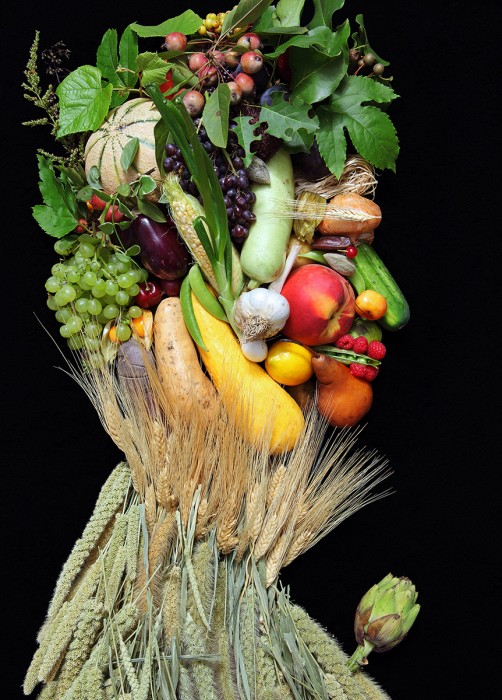 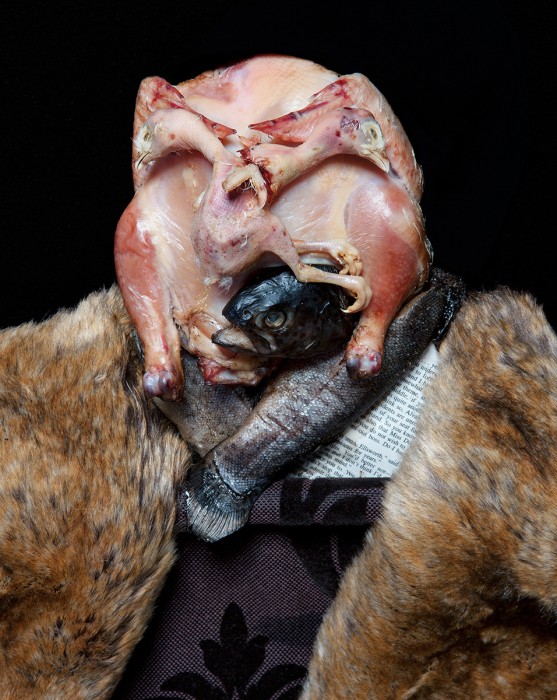 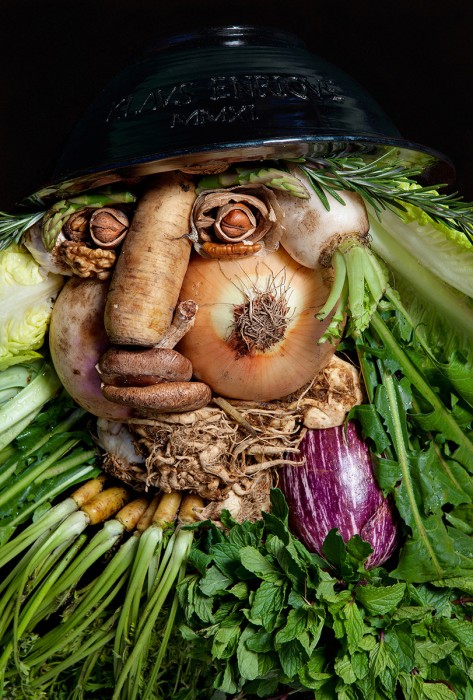 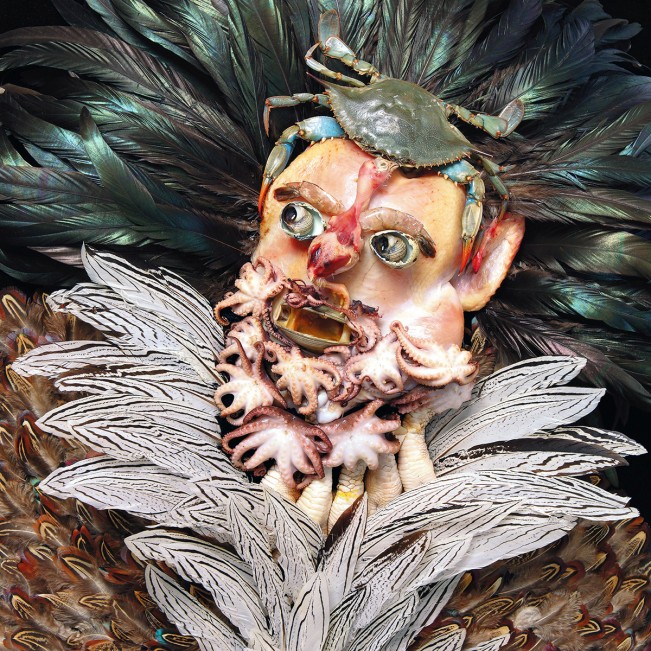 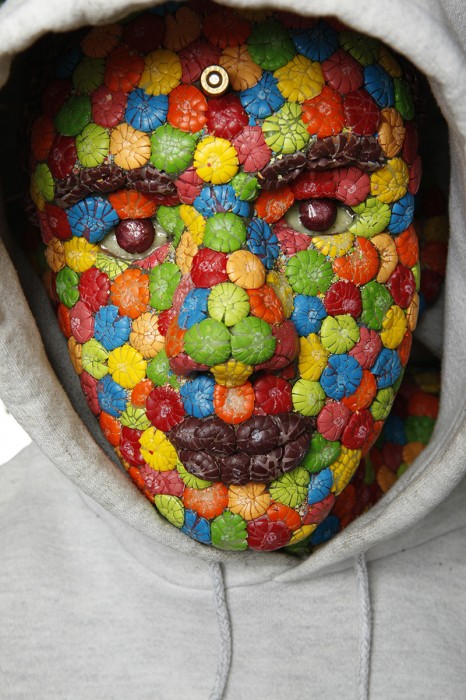 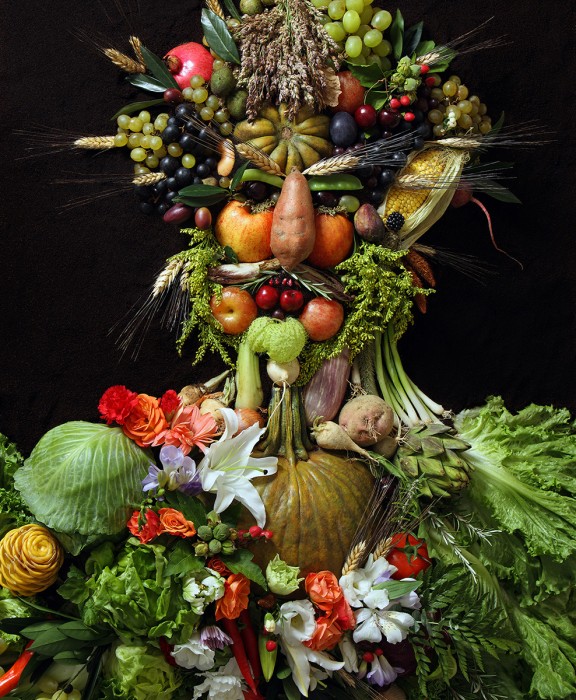 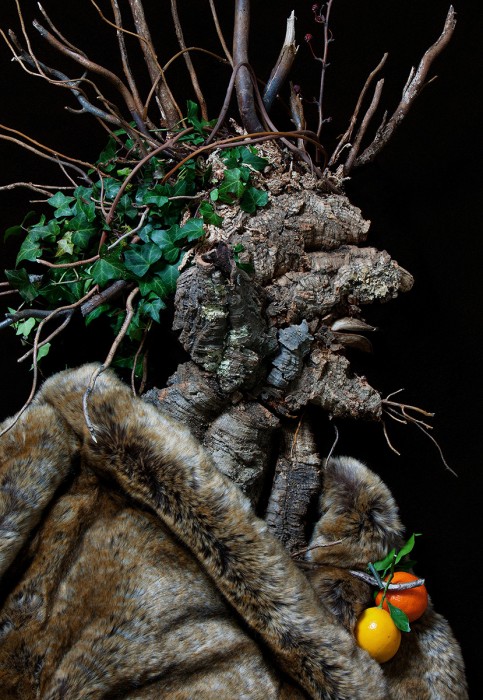 NEXT | Ben Altman: Site/Sight >
< The Filter Photo Festival: Both Sides of the Table Part 2 | PREV