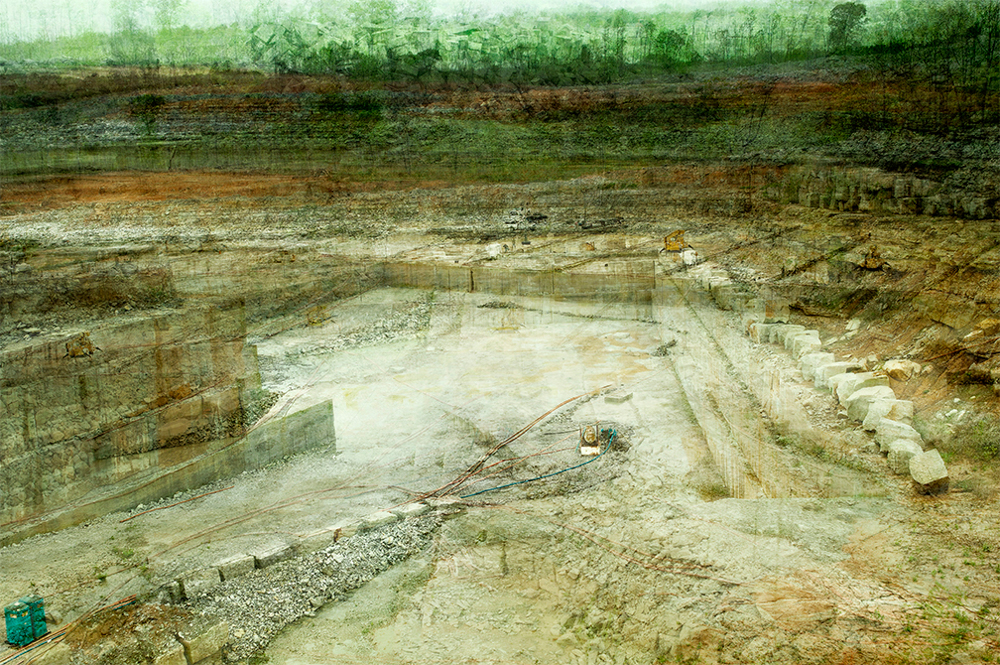 The history of artistic representation of the American landscape is grounded in the dichotomy between the sublime wilderness versus the cultivated beauty of the perfect man-made vista. Both have a powerful lure on the American psyche’s struggle for progress and the wild unknown. With that in mind, the recent conceptual landscapes by Elena Dorfman caught my attention. Elena is best know for her intensive portrait series that examined the myriad subcultures such as Fandomania: Characters & Cosplay, thoroughbred jockeys in The Pleasure Park, and people and their life-sized sex dolls in Still Lovers. I wanted to know what lures such a photographer to the land. Elena explained that she initially intended her series to be “about the people who gather at quarries to jump, but after a summer of obsessively shooting jumpers–or ‘fallers’–as [she] called them, [she] felt more drawn to the spaces than the people. Thus began a two-year exploration of active and abandoned rock quarries throughout Indiana, Ohio, and Kentucky,” which became the genesis of her series and critically acclaimed monograph, Empire Falling.

From Ed Burtynsky’s granite fortresses to Ryan McGinley’s free loving frolickers, manmade, and yet majestic, quarries will always be a source of artistic inspiration. Elena uses a collage process to create her “contemporary view of an evolving landscape.” Elena explains that “the process of collage, which is what these are, is very new to me, but the overall feeling from this series is connected to my others: all possess a sense of longing and desire to be seen (even if they are hidden inside subculture or the decay and abandon of decades), and each landscape tells a story, as with the portraits. The portrait series was a very straightforward look at unusual subject matter, and the landscapes are an unusual take on a seemingly straightforward vistas. The same applies to my new series, River, which uses the Los Angeles River as the base to construct realistic yet surreal riverscapes, much in the way the Hudson River painters assembled their landscapes. All my work references the surreal, or at least attempts to.” Elena was recently invited by the LA County Museum of Art (LACMA) to participate in their Artist’s Response series and asked to create an image inspired by the LACMA exhibition, Nature and the American Vision: The Hudson River School. Thomas Cole’s seminal landscape painting, The Course of Empire: The Savage State was Elena’s muse and she made the image below, Blue Avenue, with a similar Cole intent to be allegorical on the rise and fall of city. The image is part of her new series, River. 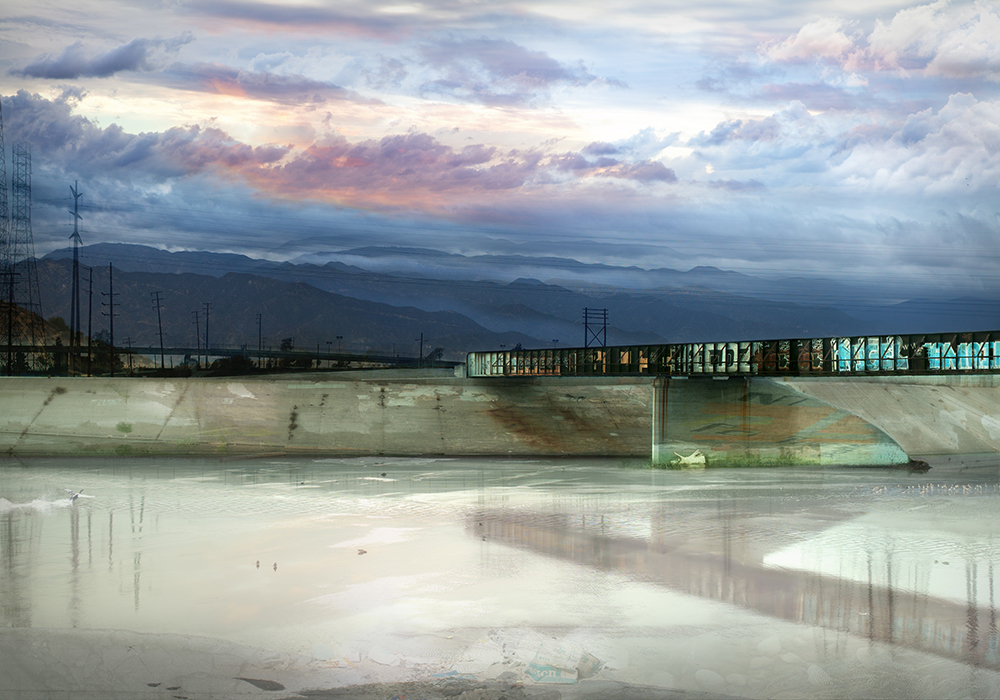 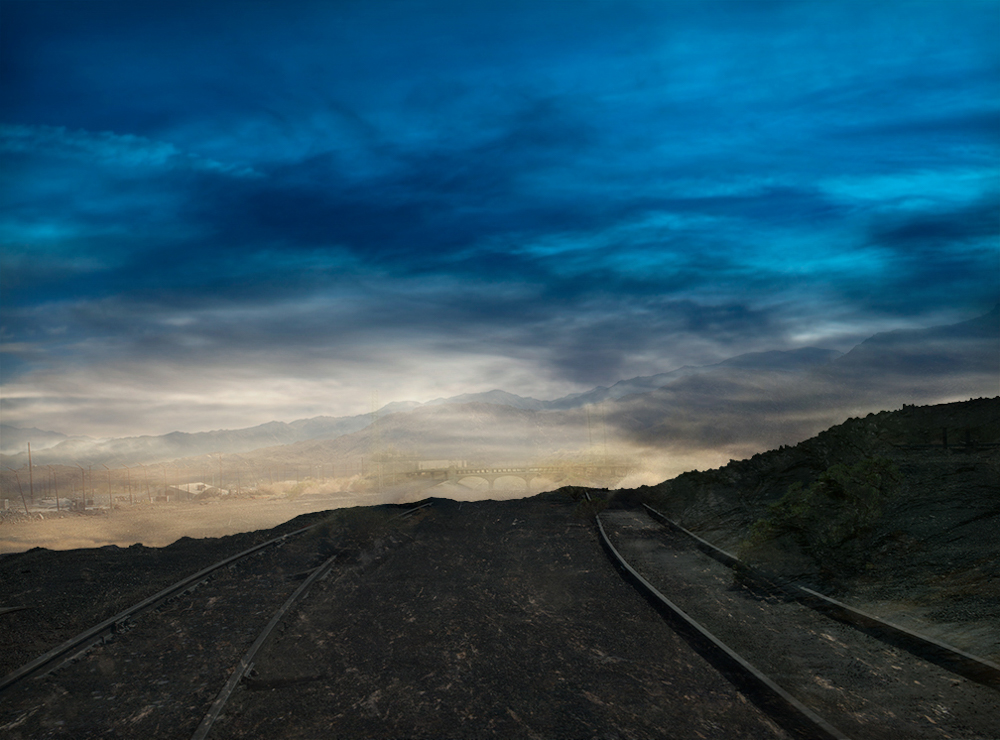 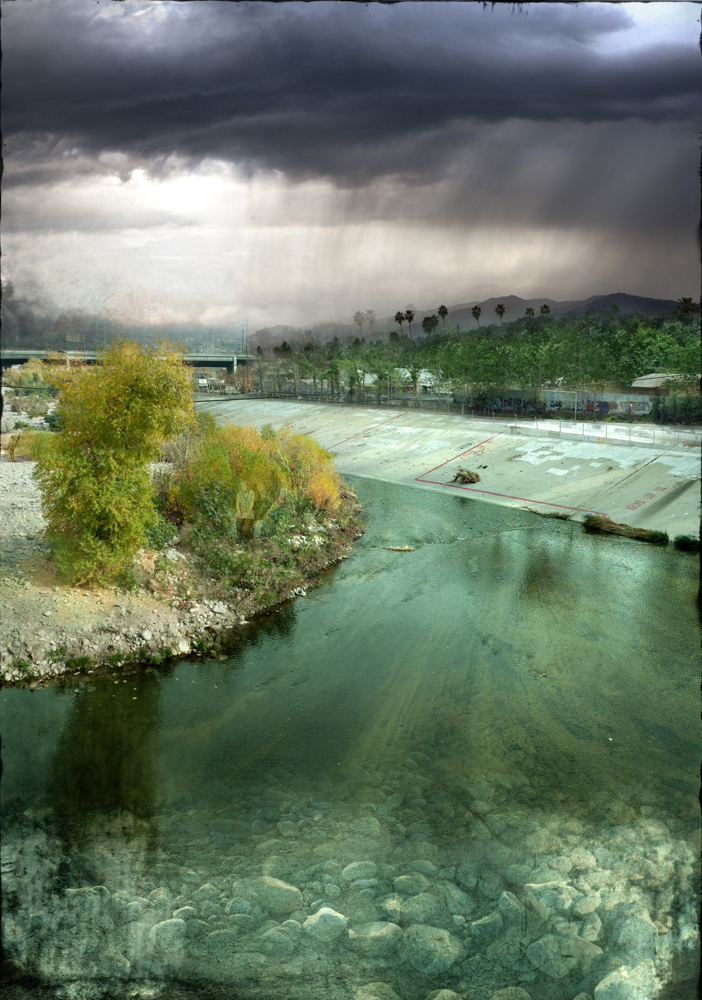 Elena was born in Boston and now lives and works in Los Angeles. She has a BA from Sarah Lawrence College. Her work has been exhibited widely in the US and abroad. Elena is represented by Modernism in San Francisco. Monographs by Elena Dorfman include, Empire Falling (Damiani, 2013), Fandomania: Characters & Cosplay (Aperture, 2007), and Still Lovers (Channel Photographics, 2005).

These seemingly ordinary sites, whose aggregate is mined until the earth has nothing left to give, have been a constant source of wonder to me. What began as a sociological exploration of the communities that gather at quarries to jump from rocky precipices into water, evolved into a study of these massive pits, often overlooked and unseen. Manipulating and reconstructing the landscape, I reassemble and layer the images emulating the natural process of stratum on stratum.” As globalization and consolidation continue unchecked, these astonishing landscapes are transfigured –with landfills, golf courses, and exclusive housing communities–wherein the quarry water element has, ironically, been incorporated into the development as a scenic or recreational point of focus. When a quarry is re-appropriated, a landscape is destroyed. The images from Empire Falling present the quotidian rock landscape in an unexpected way, such that the viewers’ perception is challenged not only by the imagery itself, but also by their own personal subjective relationships to industry and the evolving earth. 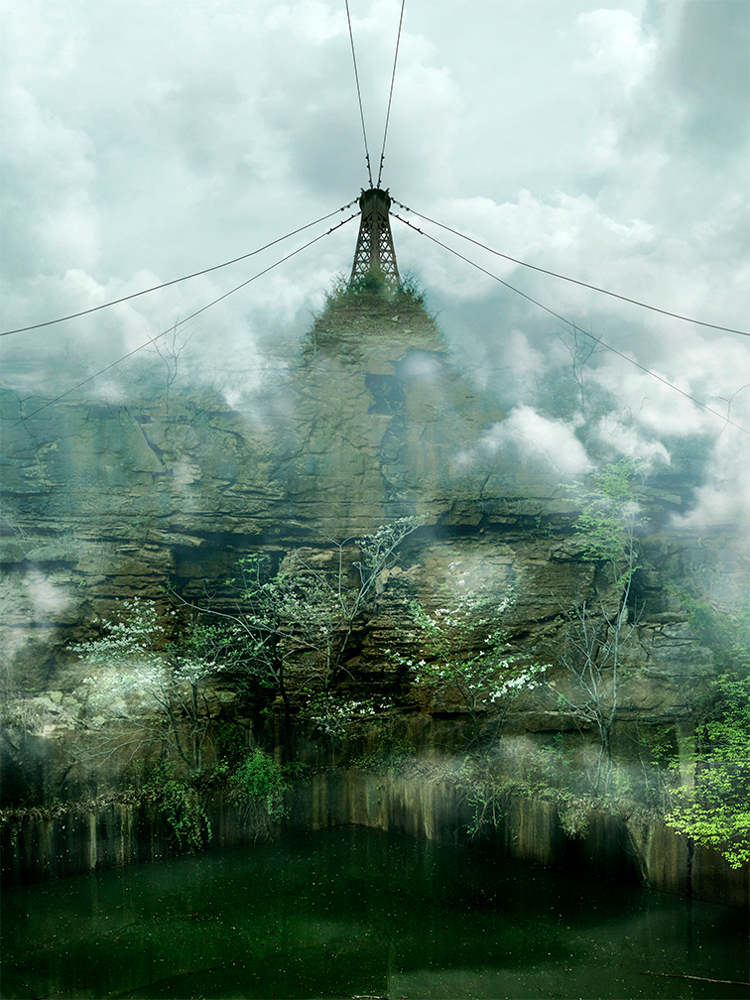 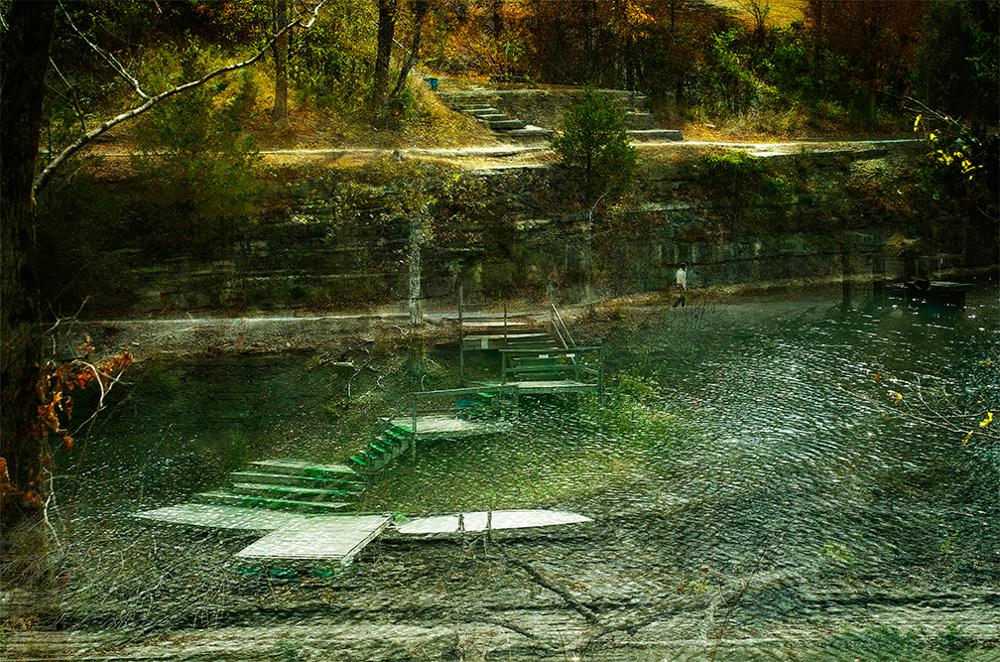 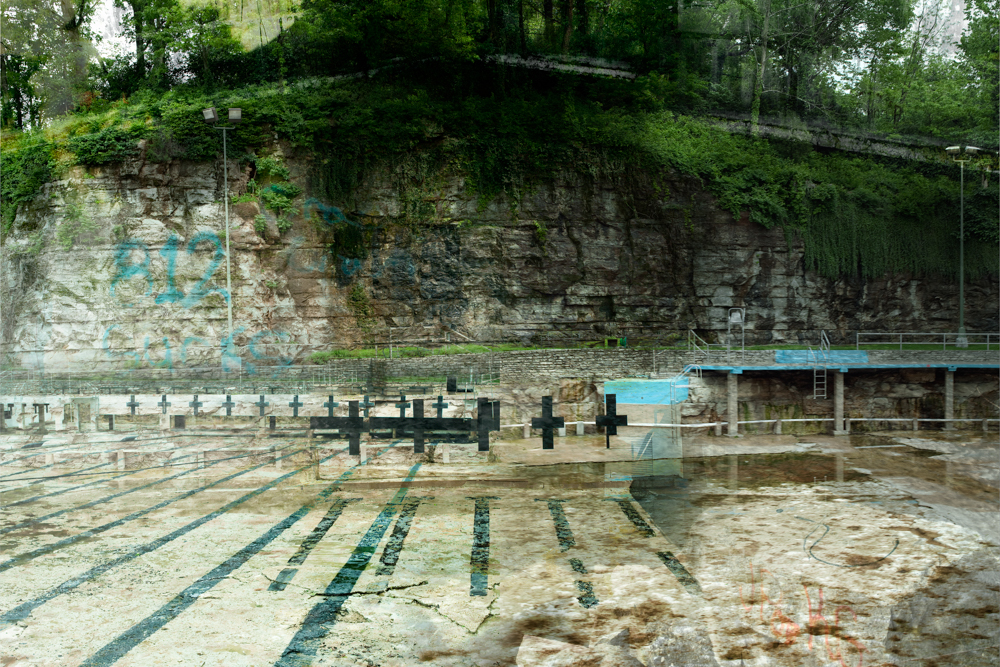 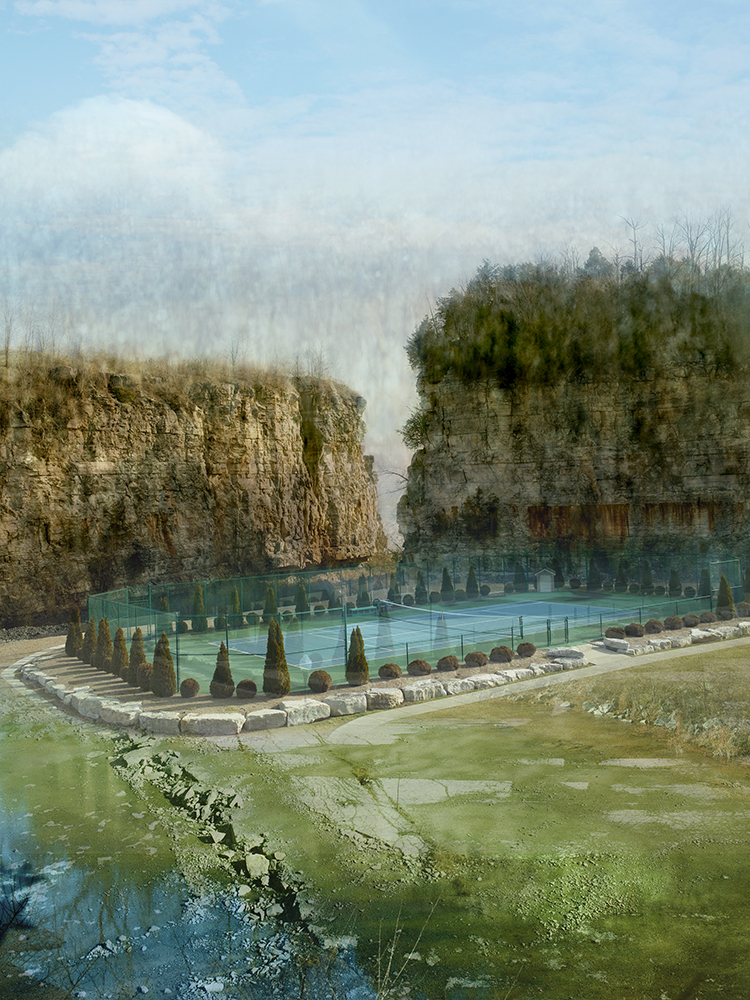 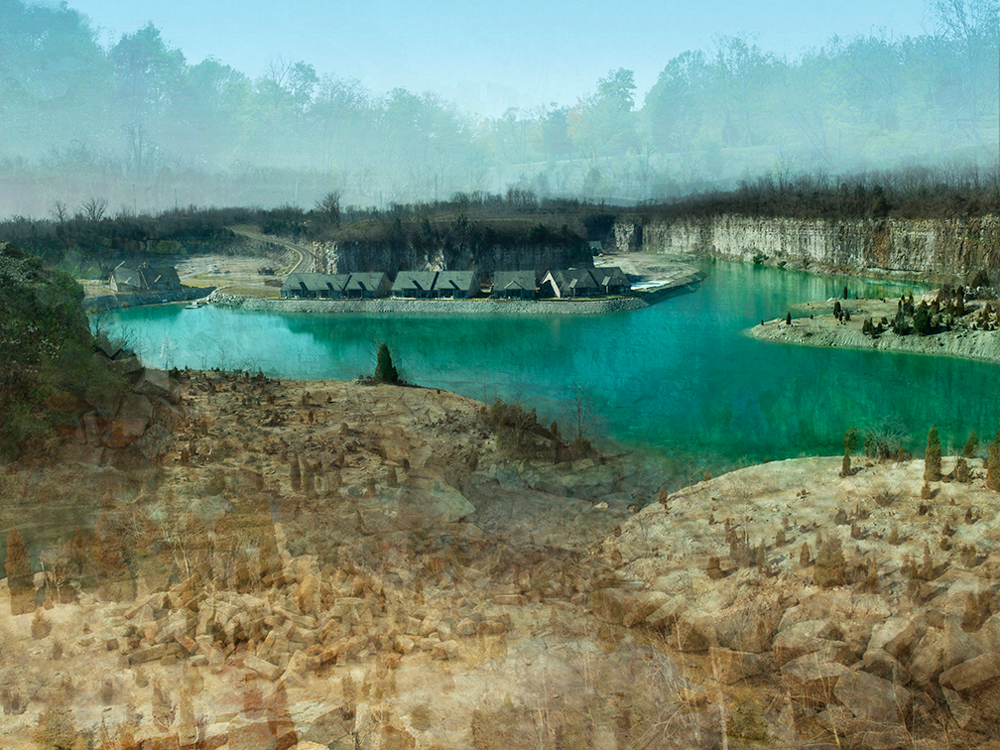 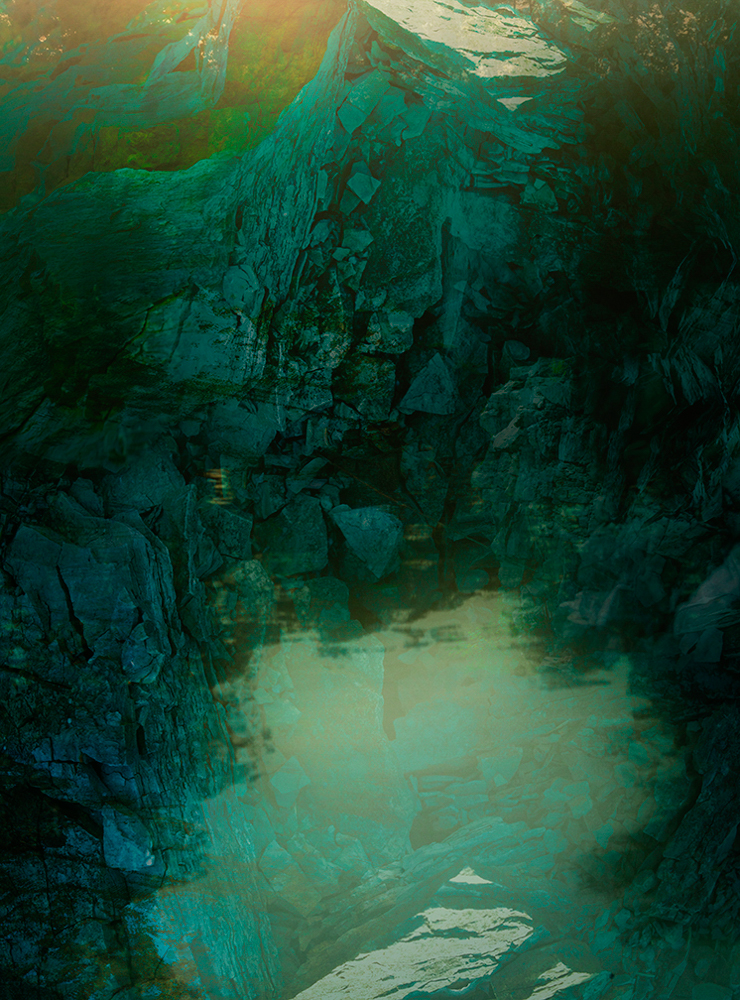 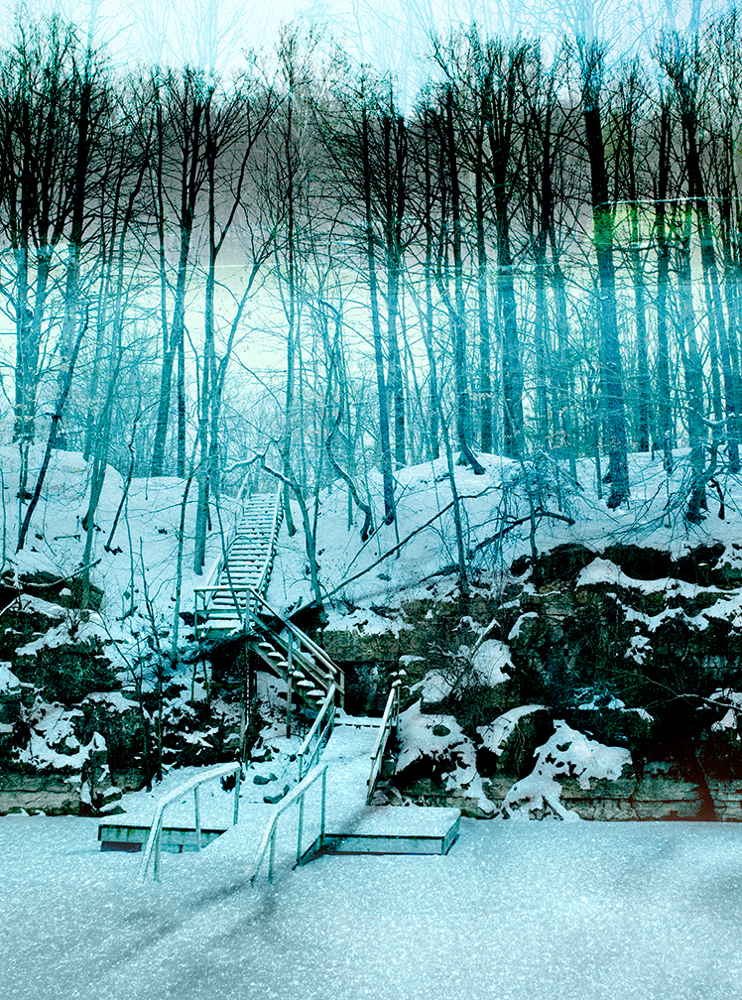 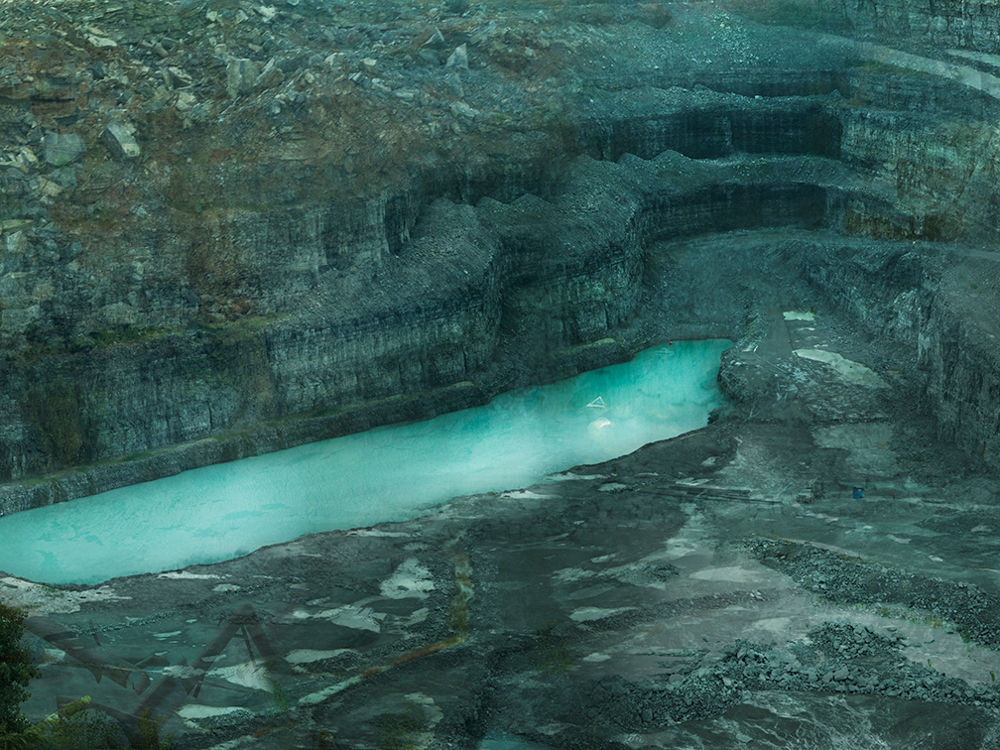 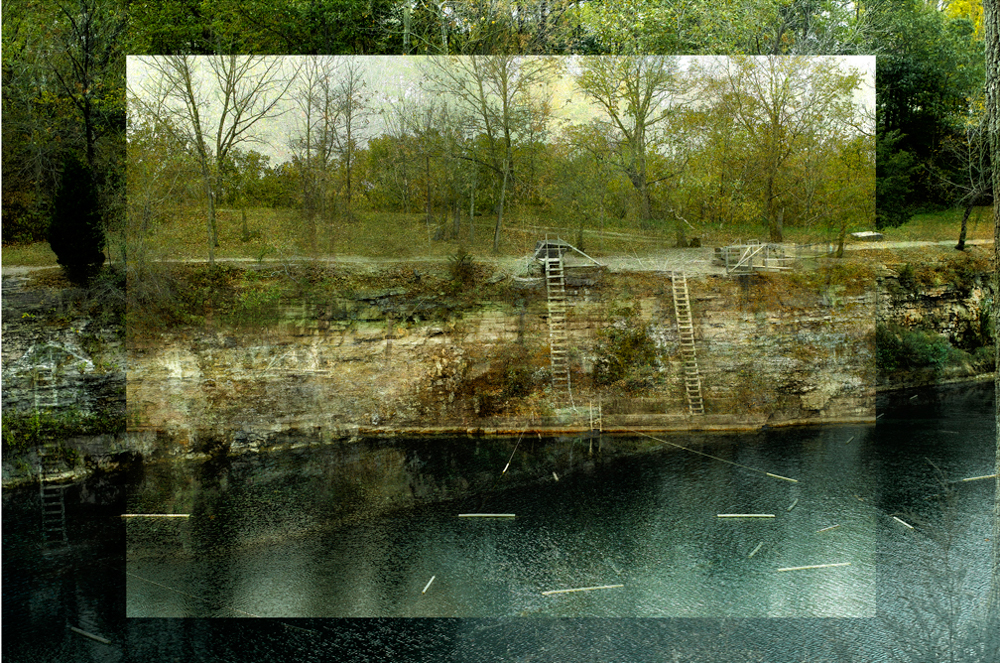