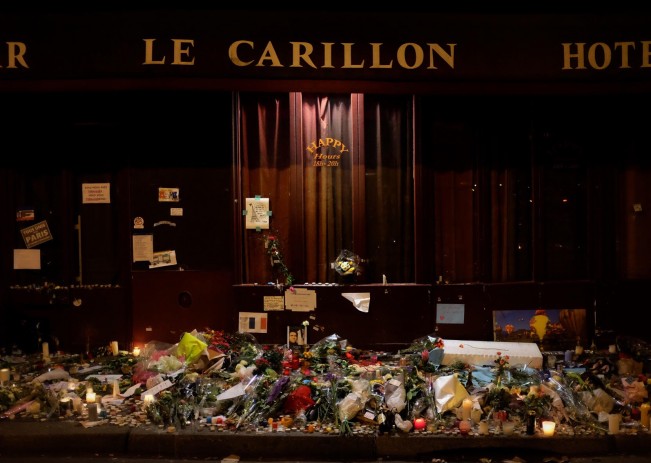 One week after the Paris attacks of November 13, 2015,  Hugo Passarello Luna posted a photo on Instagram of Le Carillon, one of the places targeted by the terrorists. In the posted image he added the location, and it led him to look at what other images had been posted of the same location before and after the attacks. The idea of how life changes in a split second and how we document our movements and activities allowed Hugo a way of talk about the fragility of time.

Hugo Passarello Luna is a freelance photographer and journalist based in Paris. In 2014 he created  “The Unexpected Photo Essay on Cortazar” exhibited in Paris and New York and featured in NY Times Lens Blog.

“Unsurprisingly, there were already many images and mostly similar: flowers on the sidewalk, candles and people lighting candles, people mourning, some French flags, letters, portraits of the victims. You scroll down, and the photos repeat themselves hundreds of times.

Until they do not.

There was a photo posted exactly one week before that attacks, on November 6th. We see Le Carillon in a different light, innocent and carefree. There is a book, a beer and a coffee in the foreground. A man standing in the background, apparently talking to someone else, oblivious of the photo being taken. Just like the photo taker is unaware of what will happen a week later.

Could we stop the feed of images there? Can we live in a universe that stood still in that moment, eternally observing the book, the beer, the coffee and the man talking? Can we freeze time just like a photo does?

We cannot travel back in time but we can explore past perceptions of those places. I chose to do it Instagram.

These are that last images posted before those places took a different tragic meaning.”

Photo by @nourayoub found with the location option.

Photo by @chialestephanie found using the hashtag #cafebonnebiere. Posted on Oct 11, 2015 at 8:05am PDT

#cafebonnebiere #coffeebreak A photo posted by Stéphanie Chiale (@chialestephanie) on Oct 11, 2015 at 8:05am PDT

Photo by @gus.belhassen found using the hashtag #comptoirvoltaire. Posted on Jun 6, 2015 at 11:25am PDT