M. Scott Brauer: This is the worst party I’ve ever been to. by Aline SmithsonNovember 28, 2016 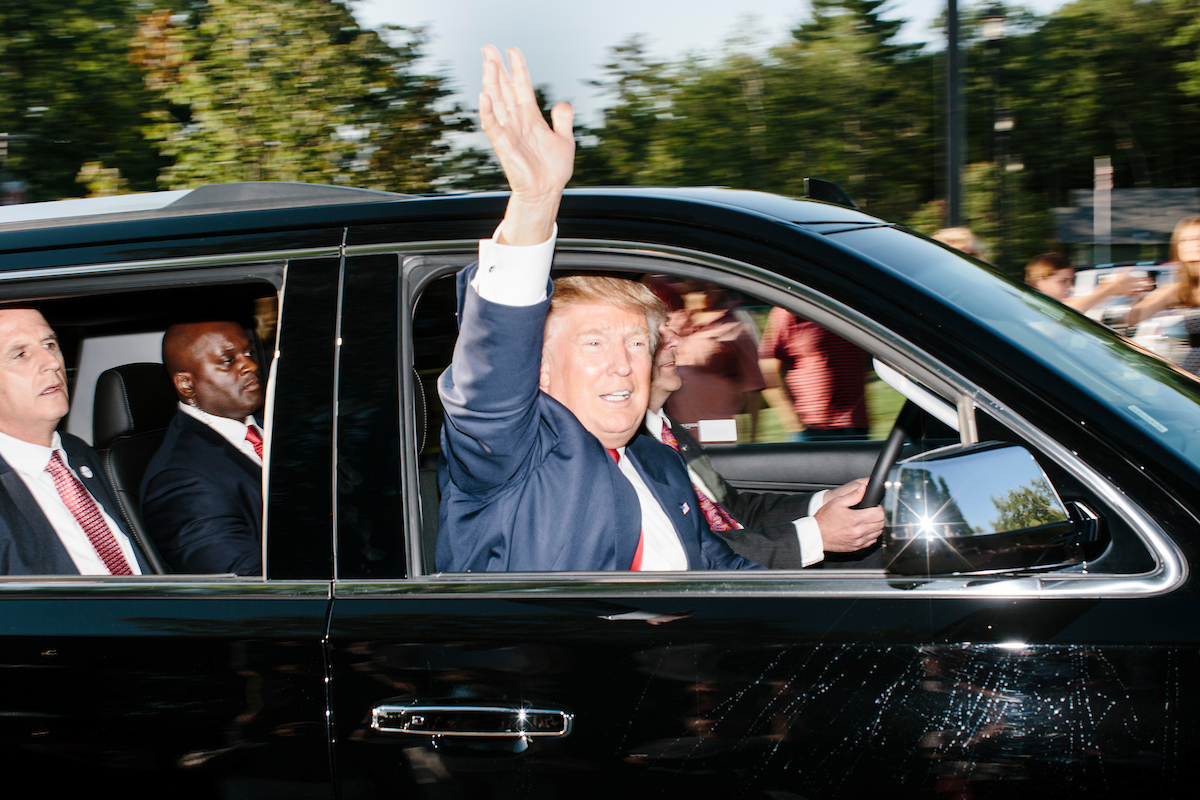 This week,  I thought it would be a good time to focus on work that speaks to an unseen America-an America often overlooked, sometimes forgotten, and so desperate for change that our government’s fate is now in the hands of… the unknown. Today we start off with work by M.Scott Brauer, a photographer who spent two years documenting a variety of candidates and campaigns, providing an visual operatic sound track to the most unique process of selecting a president with his project, This is the worst party I’ve ever been to.

Originally from Montana, M. Scott Brauer is a photographer based in Boston working for international magazines and newspapers. He has worked extensively in China, Russia, and the US. His work on the 2016 election was supported, assigned, and otherwise published by Esquire, Time, Bloomberg Businessweek, Stern, Mother Jones, Newsweek, the New Republic, the Globe and Mail, the Wall Street Journal, the New York Times, and others.  You can follow his work on instagram @mscottbrauer. He writes a column for the magazine Raw View (rawview.org) and occasionally writes on the blog dvafoto.com, which he co-founded. 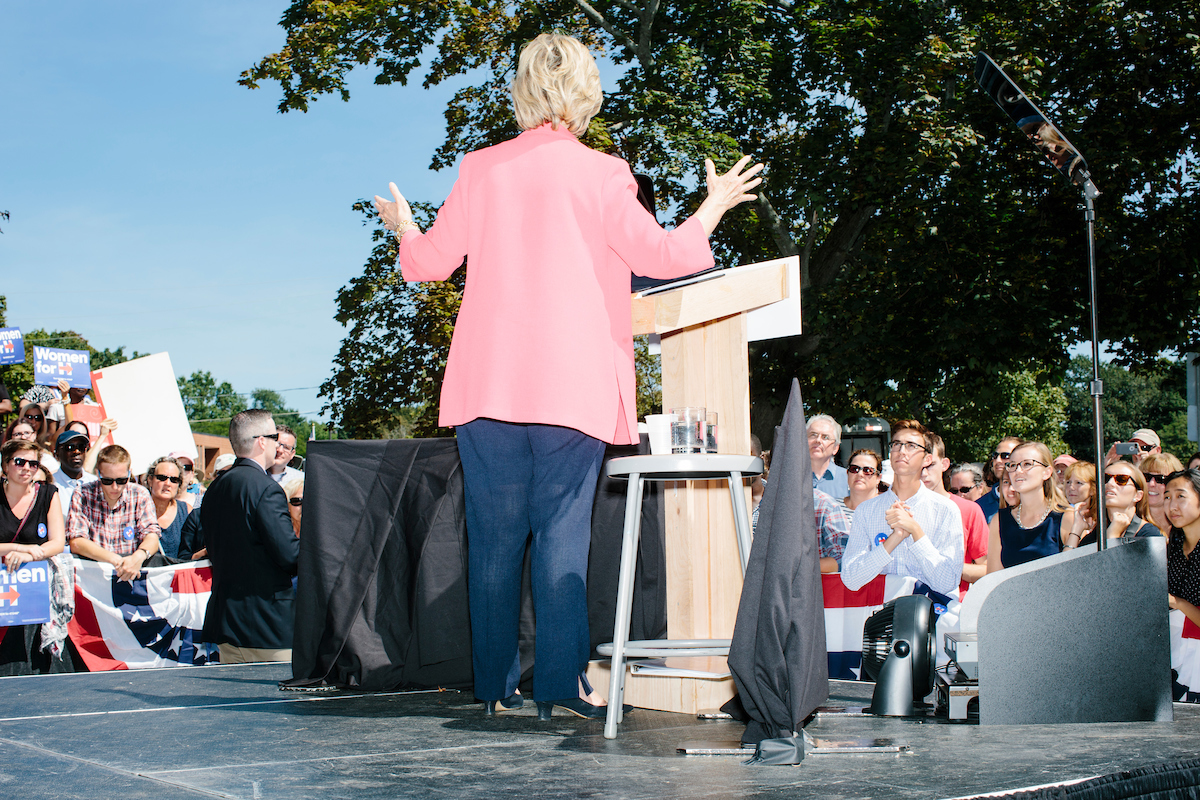 This is the worst party I’ve ever been to.

Last-minute decorations, ill-fitting suits, bad food, too many cameras, the guest-of-honor is always late, the events are either too crowded or no one shows up, half the people are wearing khaki, everyone wants to talk about politics and religion….

The presidential election is like the worst party you can imagine. And it goes on for years.

Starting in July 2015, I photographed Republican and Democratic presidential candidates as they hit the campaign trail in New Hampshire, from meet-and-greets in public libraries to brewery tours to balloon festivals to gun stores to small town diners to function halls to community centers to university auditoriums. All of this is done by the candidates in an effort to appear authentic and to appeal to what is often termed “real America.” But there is nothing less authentic than these campaign events. They are rehearsed and stage-managed and focus-grouped to be almost infinitely repeatable. 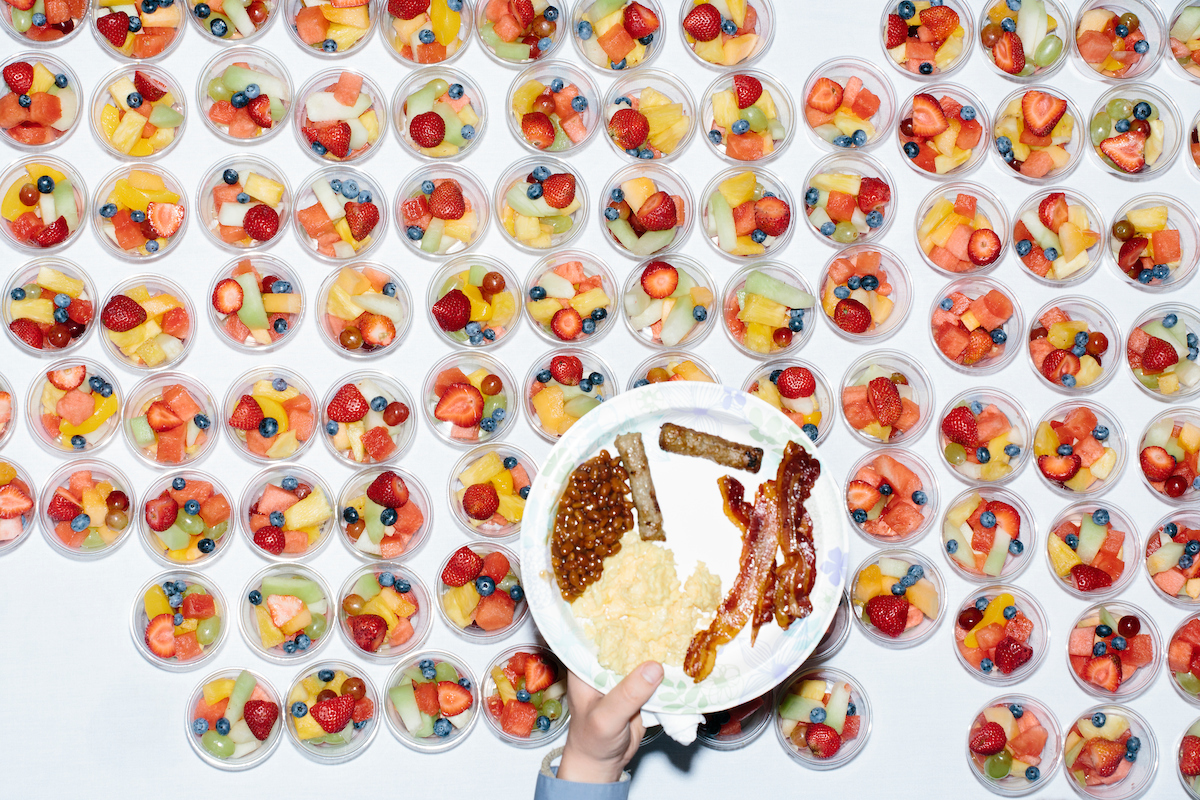 I’ve photographed this story using a harsh and direct flash, evocative of early press photography. The campaigns usually bring in their own lighting and backdrops, and this technique is a deliberate attempt to subvert their control of the optics of politics. Shooting in this way reveals the edges of this political spectacle and allows viewers to notice what’s going on around the center of attention: cold food left on a buffet line, duct tape holding up the banners, wiring in the corner of the room, bored staffers and journalists, clips keeping the American flag in perfect posture. The work is not meant to be critical of any candidates, but rather to focus on the boredom, banality, inauthenticity, and repetitiveness of their appeals to the American public as these events are set up, performed, and taken down again and again and again.

The work evolved as the campaign progressed. Moving from New Hampshire to the general election campaign, the conventions, a two-week trip across the US by Greyhound bus, and finally election night at the Midtown Hilton with Trump and his supporters, the project developed into a whole picture of the process of campaigning with glimpses of the electorate at a particularly divided time in the nation’s history. I intend to continue the project through inauguration day in January 2017. 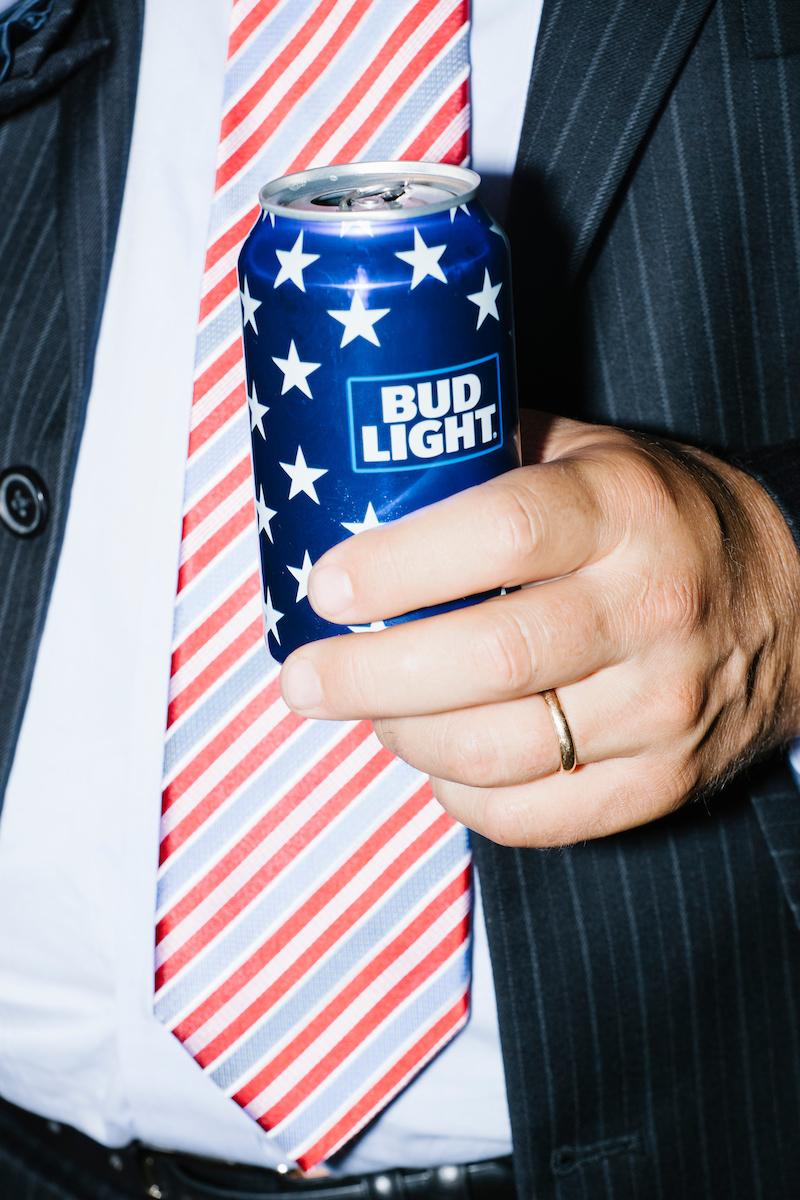 ©M. Scott Brauer, A man holds an American flag-themed can of Bud Light beer on the final day of the Democratic National Convention at the Wells Fargo Center in Philadelphia, Pennsylvania, on Thurs., July 28, 2016. 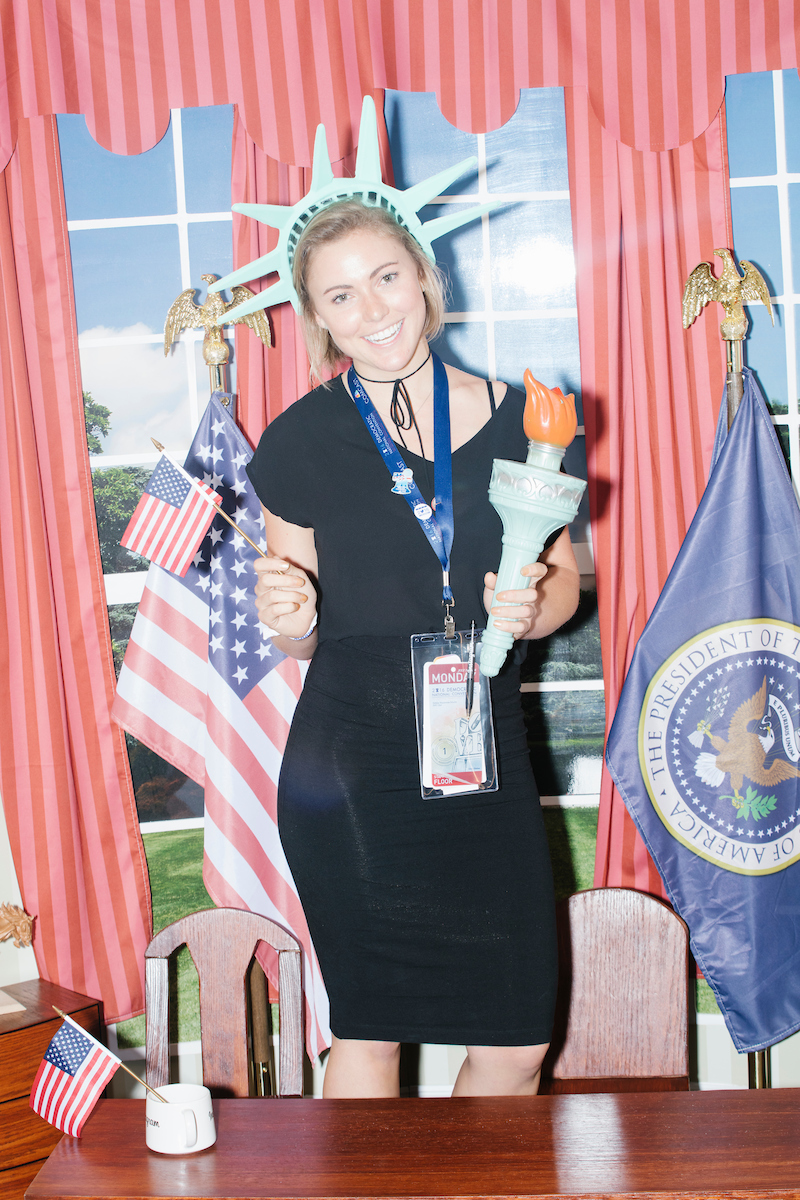 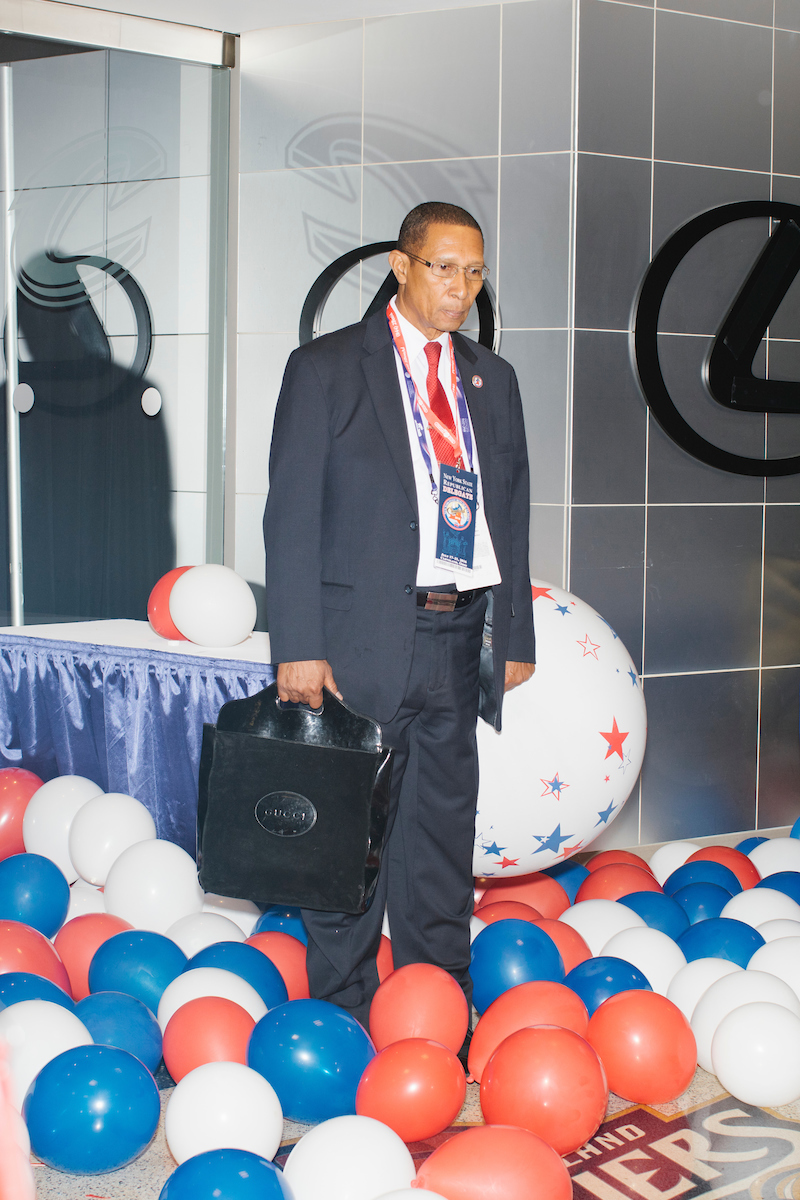 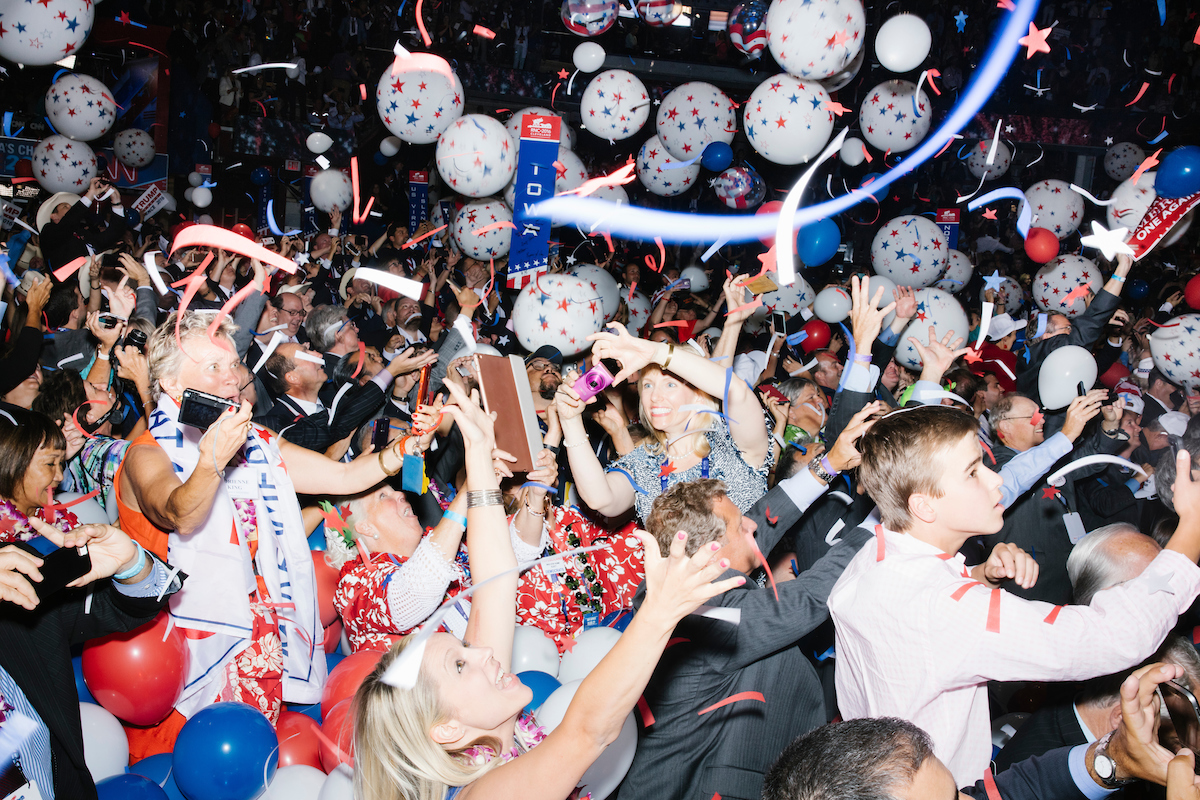 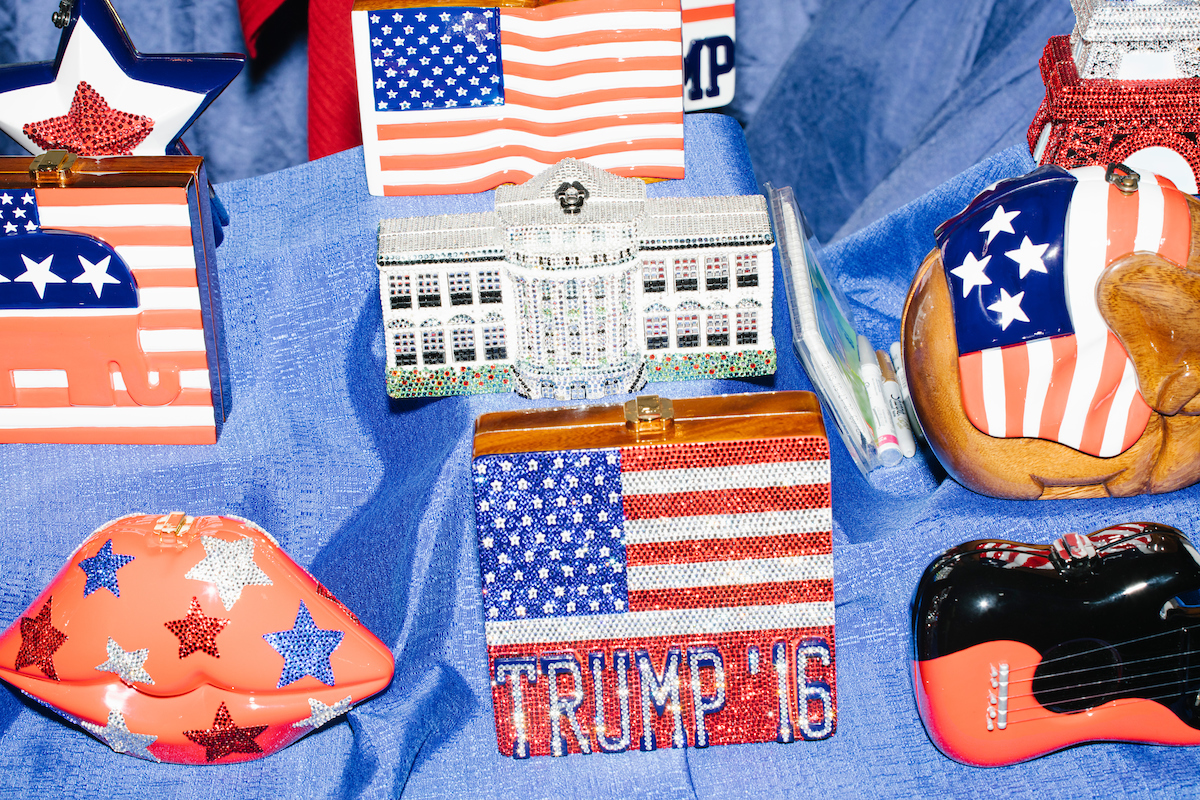 ©M. Scott Brauer, Republican-themed jeweled wooden handbags made by Timmy Woods of Los Angeles, California, are seen for sale in the Freedom Market in the secure area outside the arena on the first day of the Republican National Convention in the Quicken Loans Arena in Cleveland, Ohio, on Mon., July 18, 2016 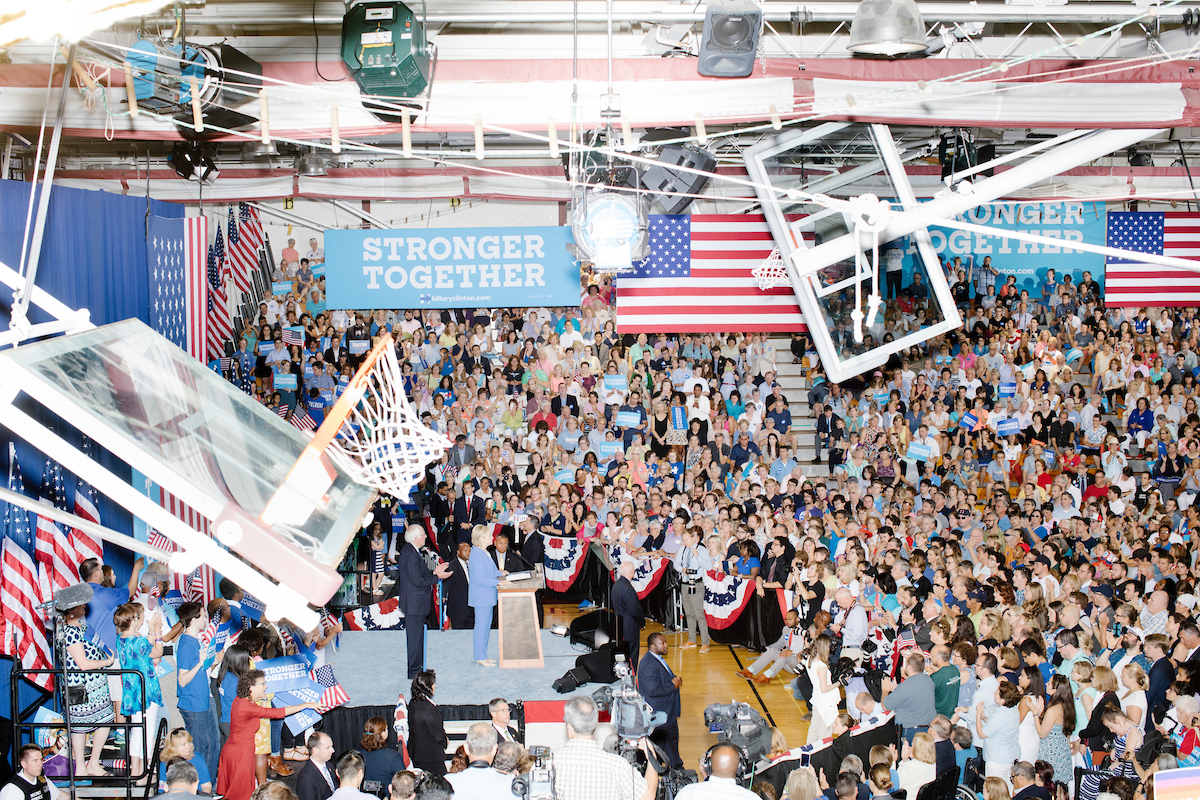 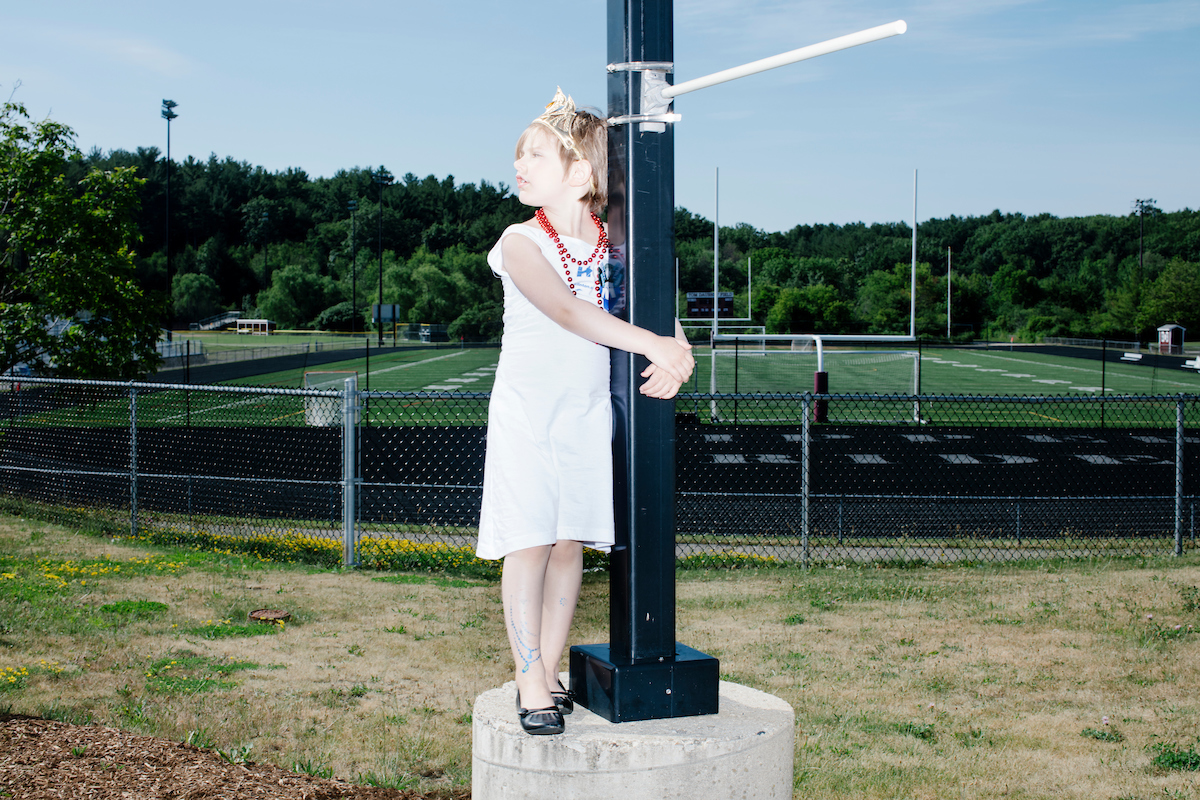 ©M. Scott Brauer, Cerys Coffey, 5, of North Hampton, MA, stands on a lamp post while waiting to enter a rally for Democratic presidential candidates Hillary Clinton and Bernie Sanders at Portsmouth High School in Portsmouth, New Hampshire, on Tues., July 12, 2016. Cerys wore a dress reading “A woman’s place is in the White House” and other Hillary Clinton campaign items. She was there with her family. At the rally, Sanders officially endorsed Clinton as the Democratic nominee for president. 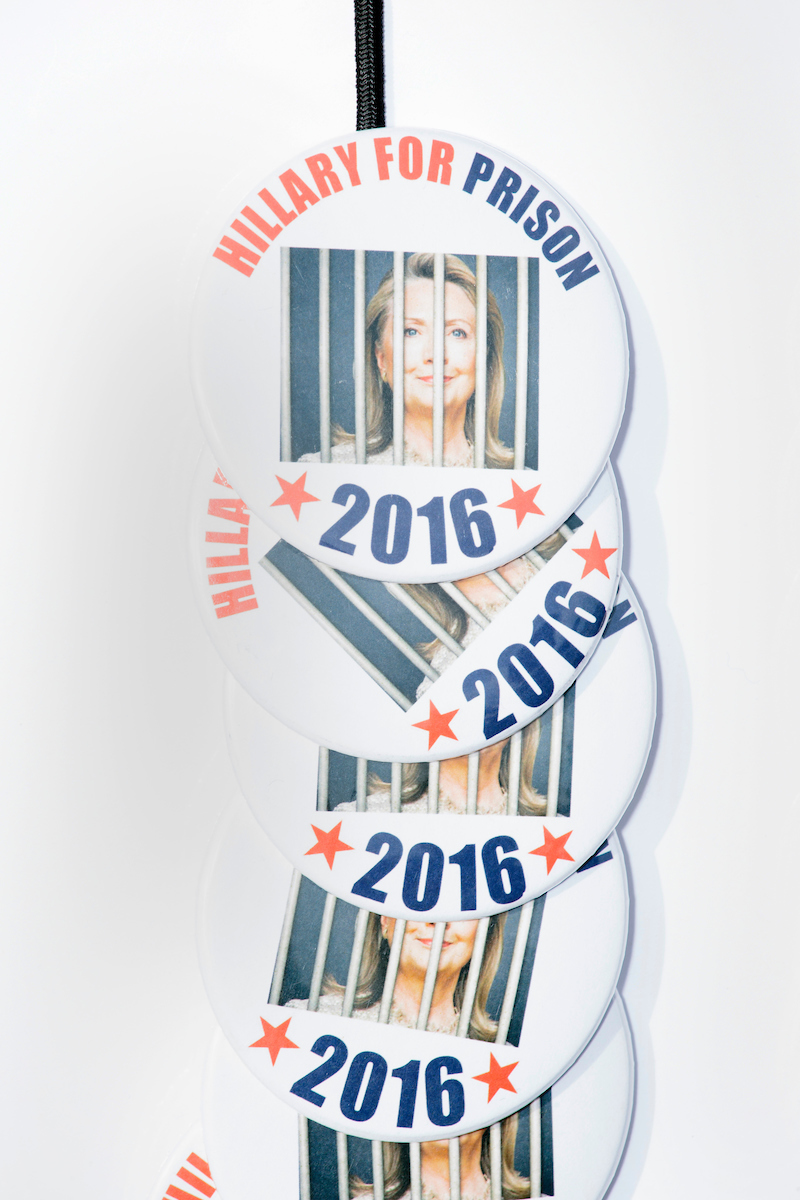 ©M. Scott Brauer, An independent merchandise seller displayed pro-Trump campaign buttons, shirts, and hats, outside the venue after real estate mogul and Republican presidential candidate Donald Trump spoke at a rally at Exeter Town Hall in Exeter, New Hampshire, on Thurs., Feb. 4, 2016. Buttons had slogans such as “Trump for President,” “Hot Chicks for Trump,” and “Hillary for Prison.” 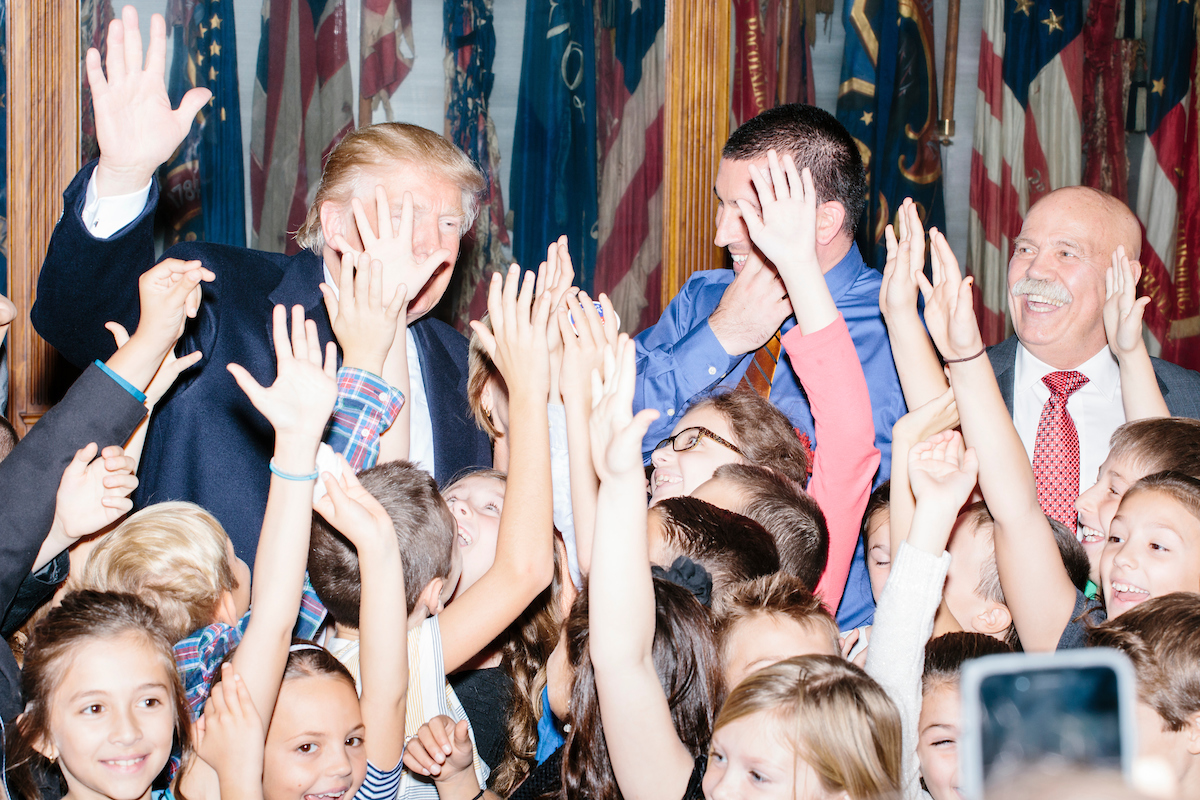 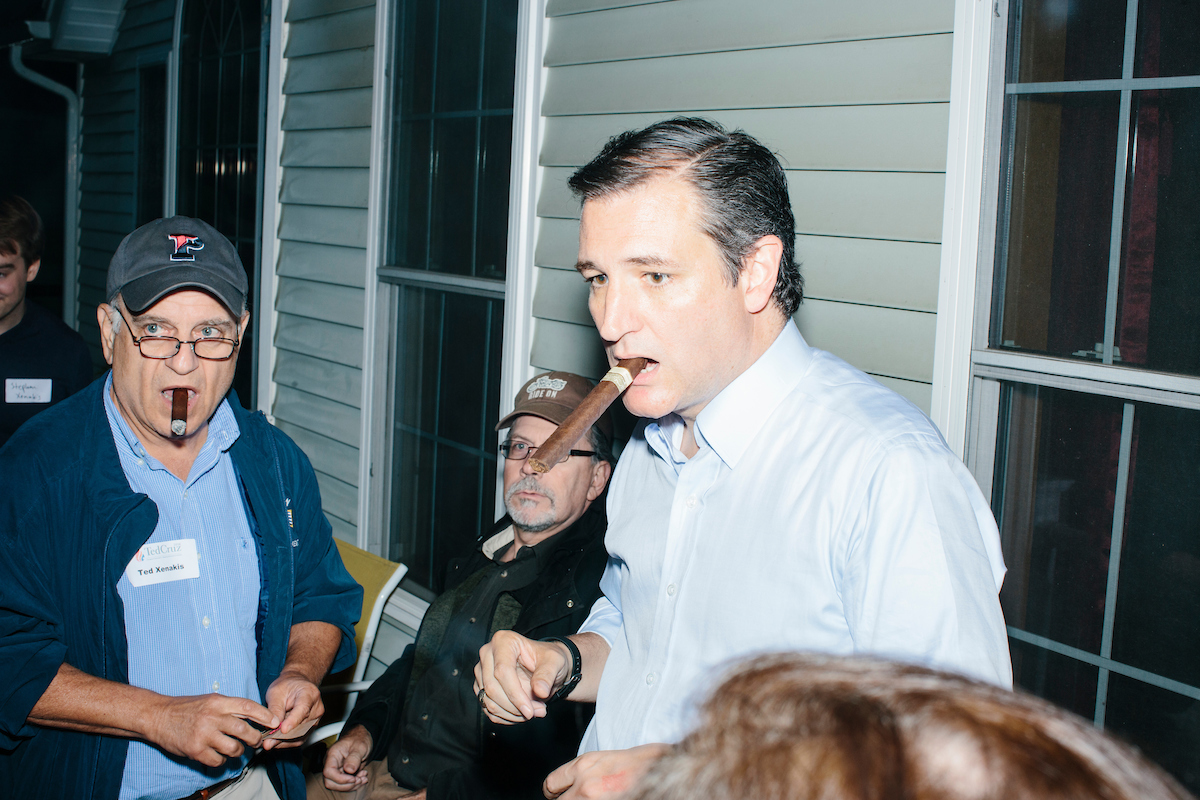 ©M. Scott Brauer, Texas senator and Republican presidential candidate Ted Cruz smokes a cigar after speaking at an event called “Smoke a cigar with Ted Cruz” at a house party at the home of Linda & Steven Goddu Salem, New Hampshire. 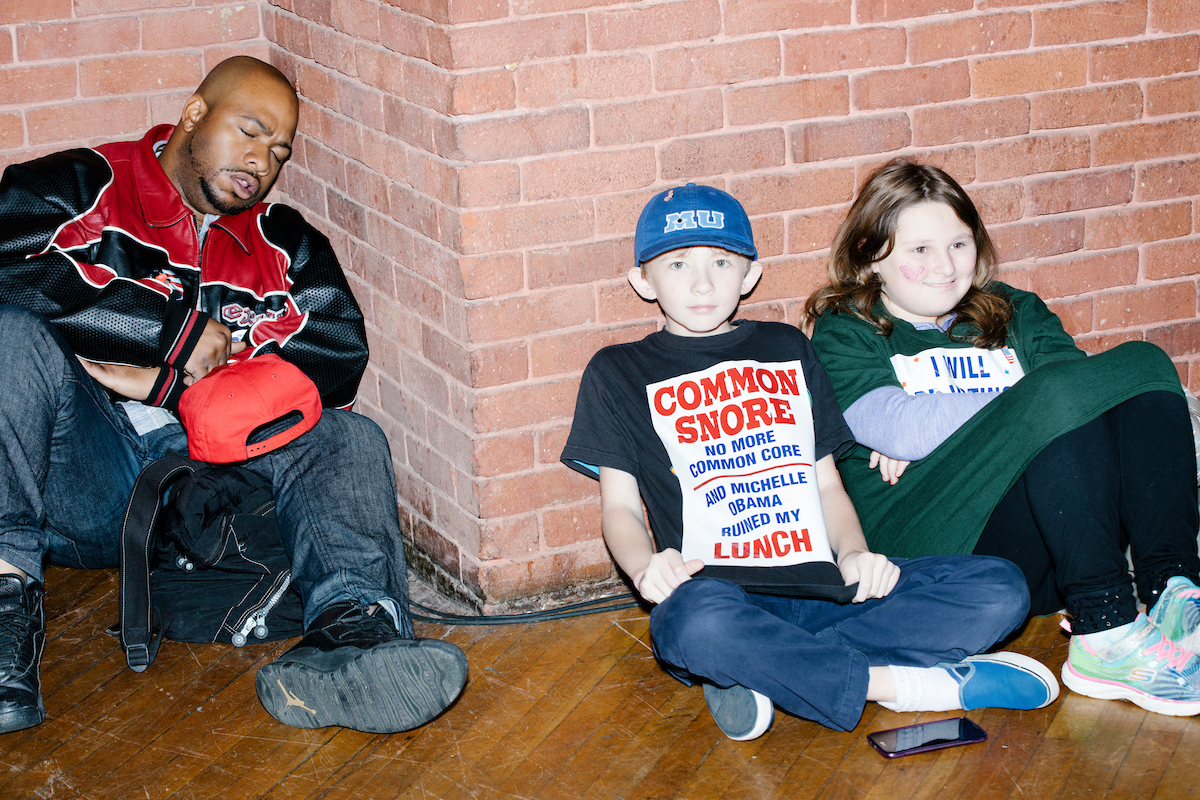 ©M. Scott Brauer, Montgomery Crane, 14, (from right), brother Frankie Crane, 11, of Arlington, Vermont, and Elijah Drake, 32, of Brooklyn, New York, sit on the ground before a campaign rally for Republican presidential nominee Donald Trump at the Radisson Hotel in Manchester, New Hampshire, on Fri., Oct. 28, 2016. The Cranes traveled to the rally with their parents. Drake has been to four other Trump events and considers himself a strong supporter of the candidate. To attend this rally, Drake got on a Greyhound bus in New York at about midnight and traveled for 7 hours. He would be getting on a bus back home immediately after the rally. Drake said of Trump, “He’s the first and last person I’ll ever vote for. If it’s not somebody of his caliber, I’m not voting again.” 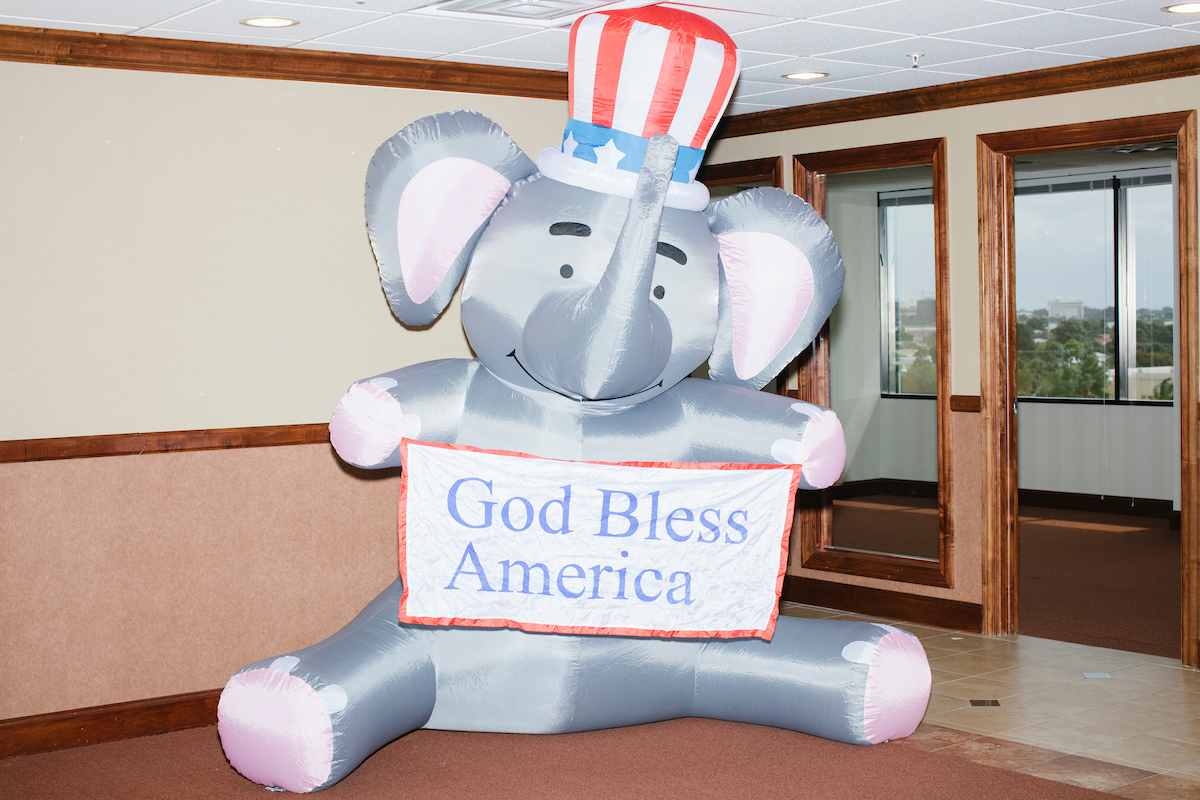 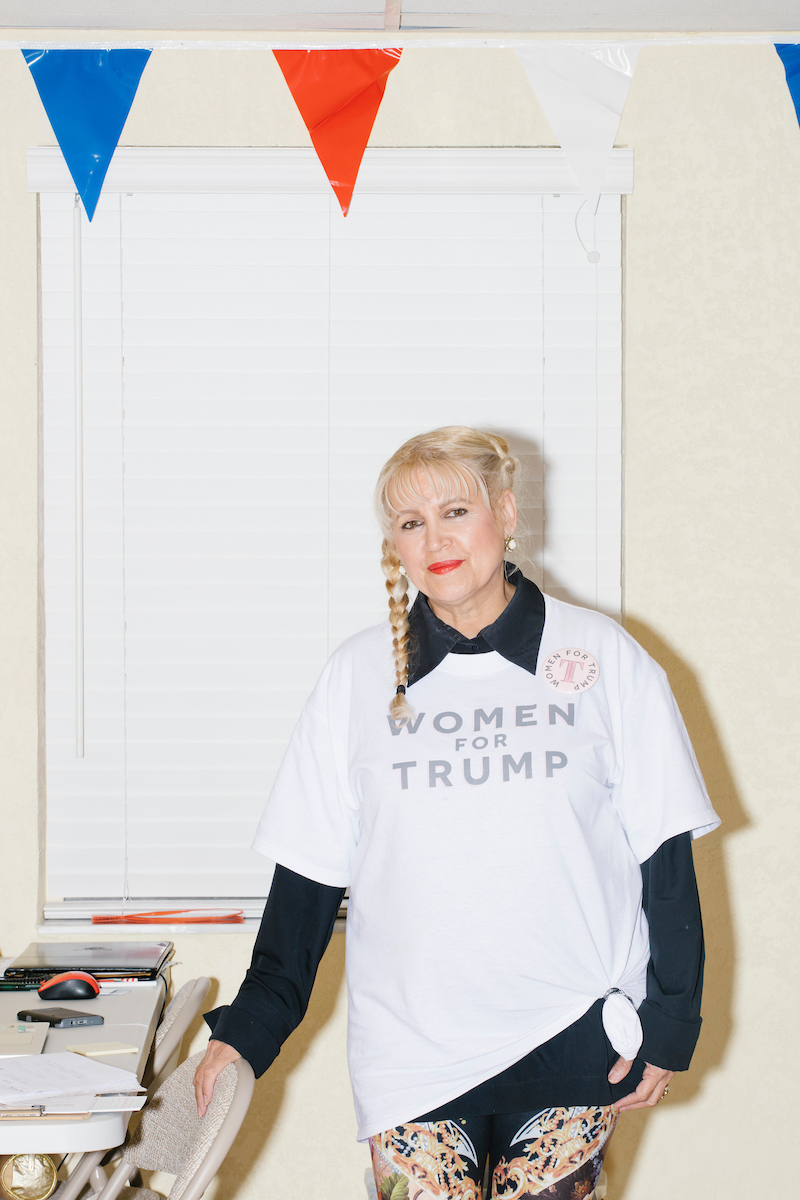 ©M. Scott Brauer, Wearing a “Women For Trump” shirt, Blanca Vrotsos, 62, of Doral, Florida, has been volunteering almost everyday for 10 months at the Donald Trump campaign office in Hialeah, Miami, Florida. She helps recruit volunteers, register people to vote, and train other volunteers. Originally from Cuba, she has been a US citizen for 15 years and says she is “extremely Republican.” She first voted in 2000 and voted for George W. Bush. She says she will always support the Republican nominee for president. 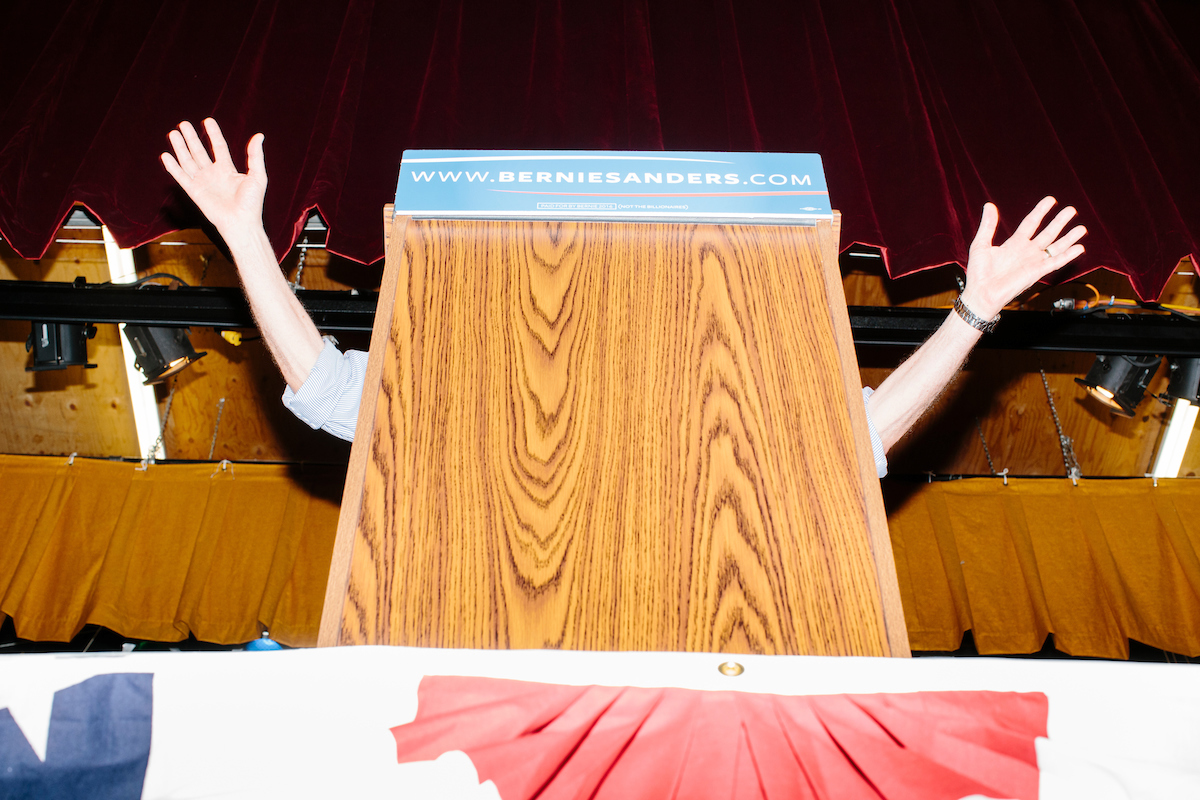 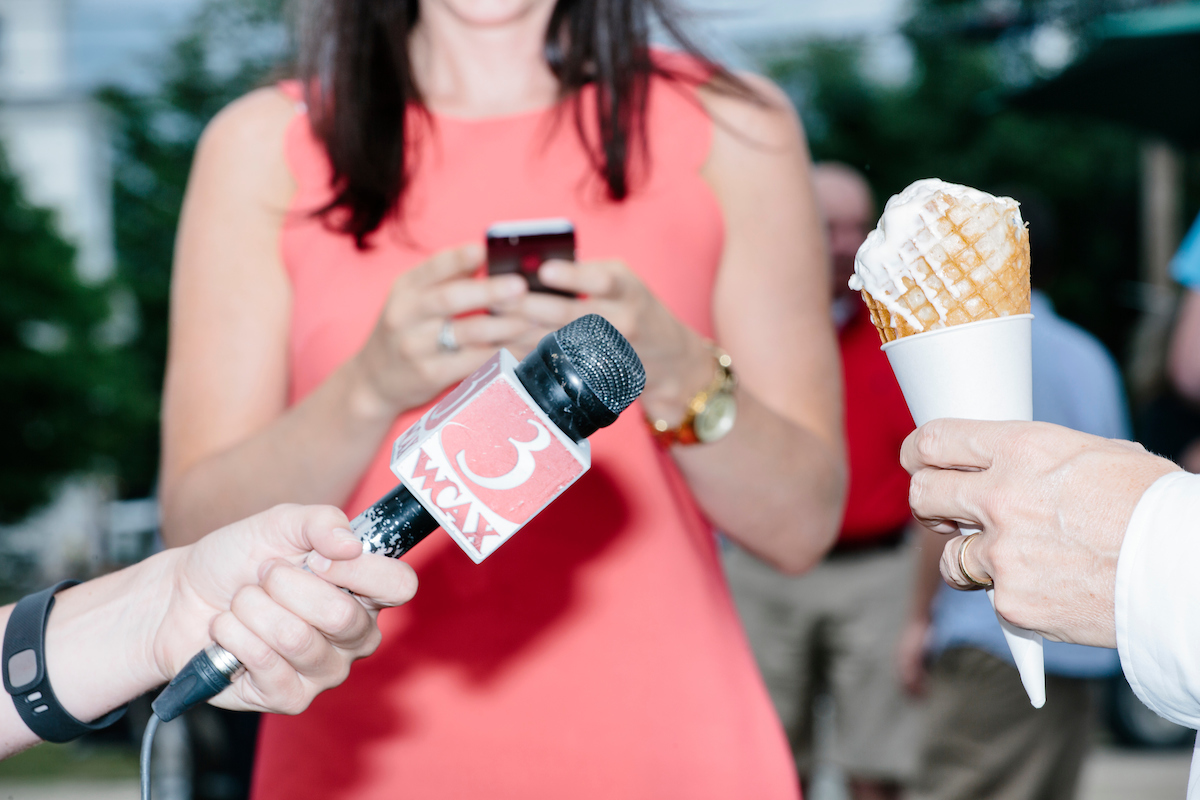