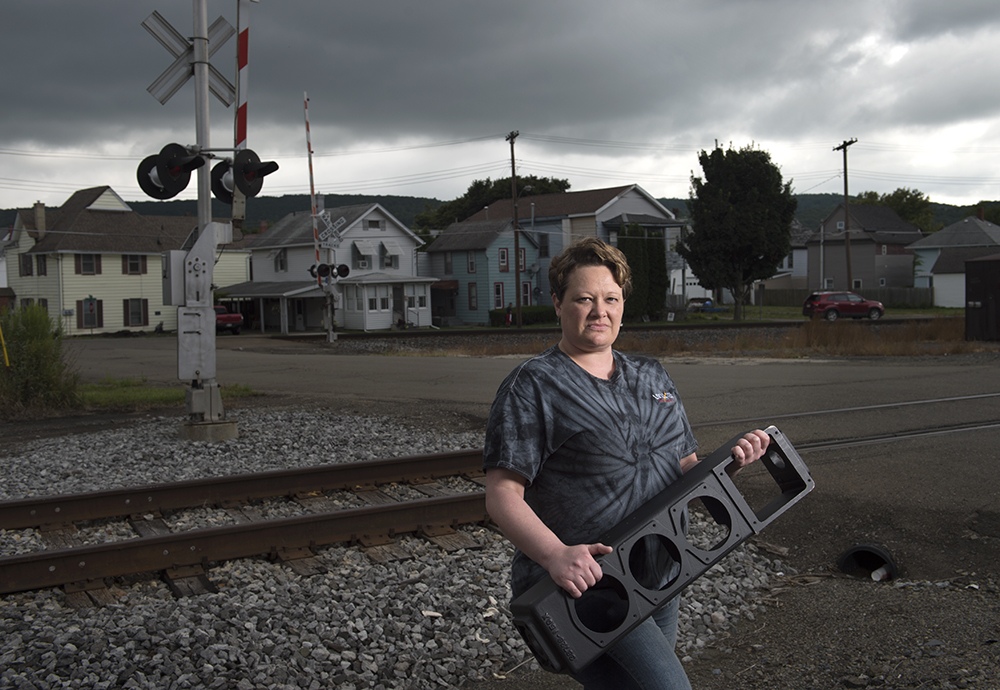 ©Deanne Fitzmaurice, JENNIFER NARROD, a Specialist at Alstom Signaling Inc. in Rochester, New York. Jennifer started out at a plastics plant in Gates, New York shortly after high school. After hearing about a job opening from a relative, she applied for a position at Alstom’s Rochester facility. Once she was hired, Jennifer quickly rose up the ranks. She served as a shop steward for ten years, during which she negotiated two contracts.

I recently spent time with Pulitzer Prize-winning photographer Deanne Fitzmaurice, while teaching at the Center for Photographic Arts in Carmel this past winter. Deanne was also giving a workshop and I learned about her impressive projects, empathetic focus, and strong work ethic. Not only is she a wonderful educator and photographer, Deanne’s list of awards and clients are more than impressive. She also happens to be a Nikon Ambassador and the co-founder of Think Tank Photo, along with her husband, photographer Kurt Rogers. If you don’t know their camera bags, you should!

As we celebrate women photographers this week, we are thrilled to share Deanne’s project, Rosies, focusing on women doing traditional “men’s” work, changing our expectations of gender in certain workplaces.  Tomorrow night, Deanne will open an exhibition of this work, organized by JMA and the New York City Department of Transportation, showcasing and highlighting women in the manufacturing industry in honor of Women’s History Month. The project reveals the overlooked contributions, and decline in hiring since WWII, of the skilled and hard-working women who build our 21st Century transportation including trams, rail, buses, bridges, roads and streets.

The Women Can Build photography exhibit will be running from March 8th – May 15th in the Financial District in two outdoor locations on DOT Art’s art display cases at Water Street and Gouveneur Lane and Water Street and Pearl Street. The exhibit will feature 16 “modern Rosies,” in addition to historic photographs of WWII-era “Rosie the Riveter” manufacturing workers, from the Library of Congress. 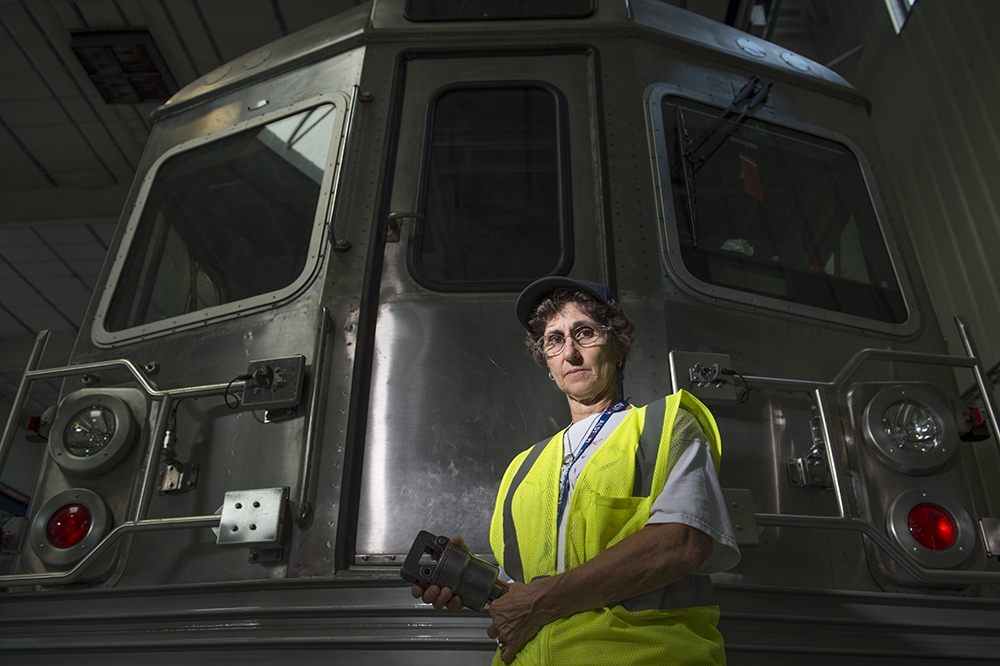 As a Pulitzer Prize-winning editorial and commercial photographer, San Francisco-based Deanne Fitzmaurice is most known for her unique ability to go behind the scenes to discover and convey personal, intimate and emotional stories through images. Fitzmaurice, a Nikon Ambassador, is an assignment photographer with publications including Sports Illustrated, ESPN, National Geographic and many other respected outlets. In addition to her editorial work, she also holds an impressive portfolio of commercial photography clients and is a multimedia storyteller. She has received awards from American Photography, Pictures of the Year International and Communication Arts to name a few. She is a co-founder of Think Tank Photo and is represented by National Geographic Creative. 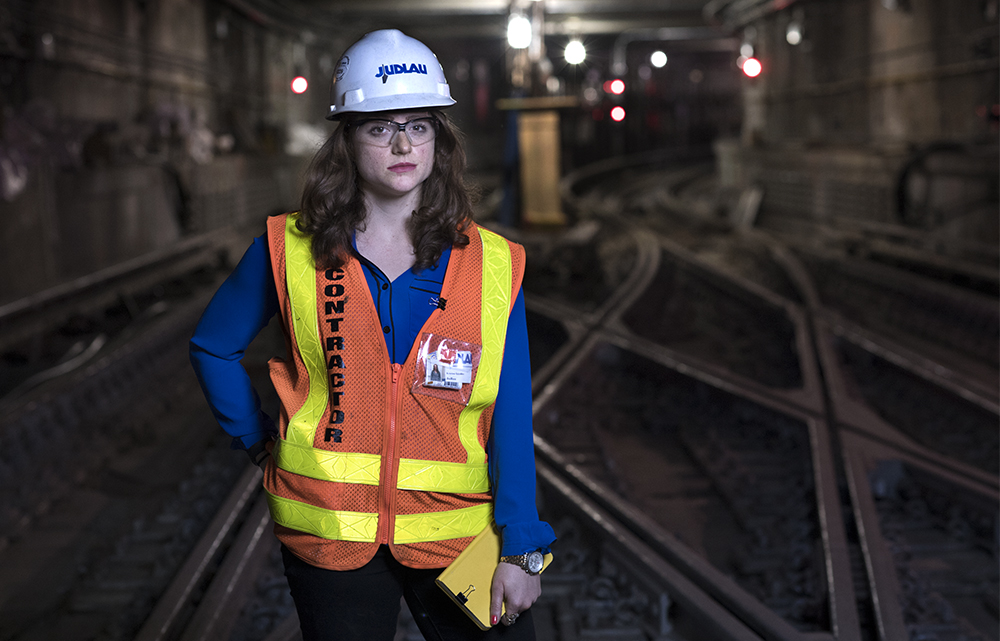 ©Deanne Fitzmaurice, KRISTINA IPPOLITO, a project engineer at Judlau Contracting in New York City. Kristina works on the South Ferry subway station rebuilding effort, which was damaged during Superstorm Sandy. She is the only woman engineer on the job. “It’s a challenge to be the only woman in a male-dominated field. It takes a lot longer for men to take you seriously. You have to prove that you know something. People will ask things like, “Whose daughter are you?” or “Are you an intern?” That make you feel almost unqualified. That’s the main frustration. It’s about getting the job done, though. It takes a while for men to get over that hurdle, but once they do it works out.”

These modern-day Rosie the Riveters are powerful, skilled women who build our trains, buses and infrastructure—some of the few, as there is wide gender inequality in manufacturing and construction jobs across America. Women have come a long way in the last generation with job opportunities—but women are still discriminated against in some fields and fill too few top positions. Now, when there seems to be a backlash against women’s rights, it’s important to recognize that women deserve the same opportunities as men—and deserve equal pay for equal work. I wanted to celebrate these strong, dynamic women in this series of portraits—and hope that this work sparks discussion that will help create increased opportunity for women. 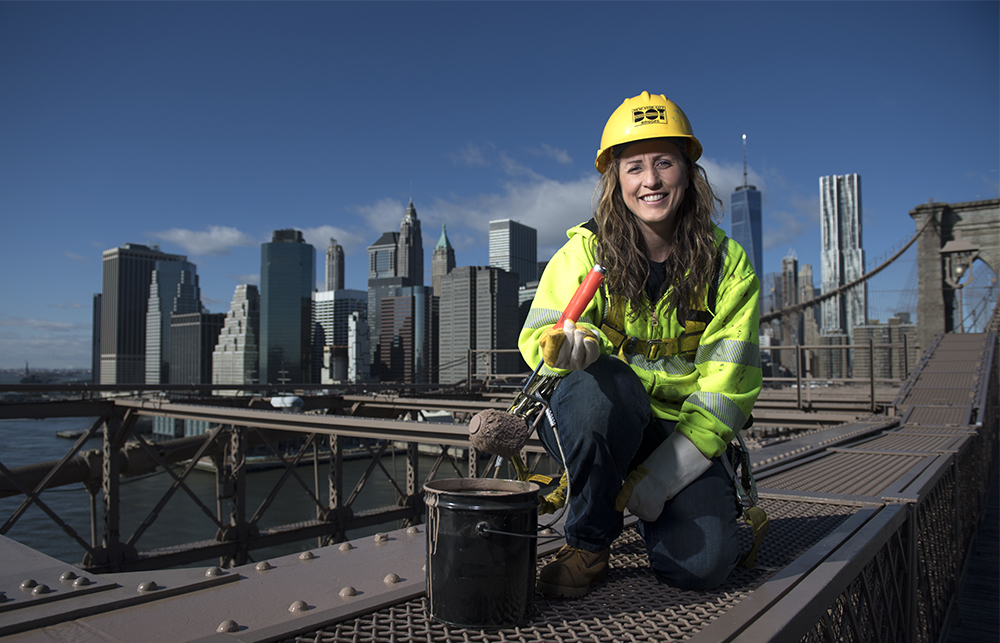 ©Deanne Fitzmaurice, ELISANGELA OLIVEIRA, a bridge painter for the New York City Department of Transportation. “I’ve been doing this for 18 years since I was 19-years-old. I started out in an apprenticeship program with the Bridge Painters Union, Local 806. After three years as an apprentice, I became a journeywoman, and then a forewoman. After that, I worked as a supervisor and in quality control. I did a lot of big jobs for many years. I believe that women can do anything. Whatever men can do, women can do. Women can build, and do things like paint bridges because we have the strength and the patience.” 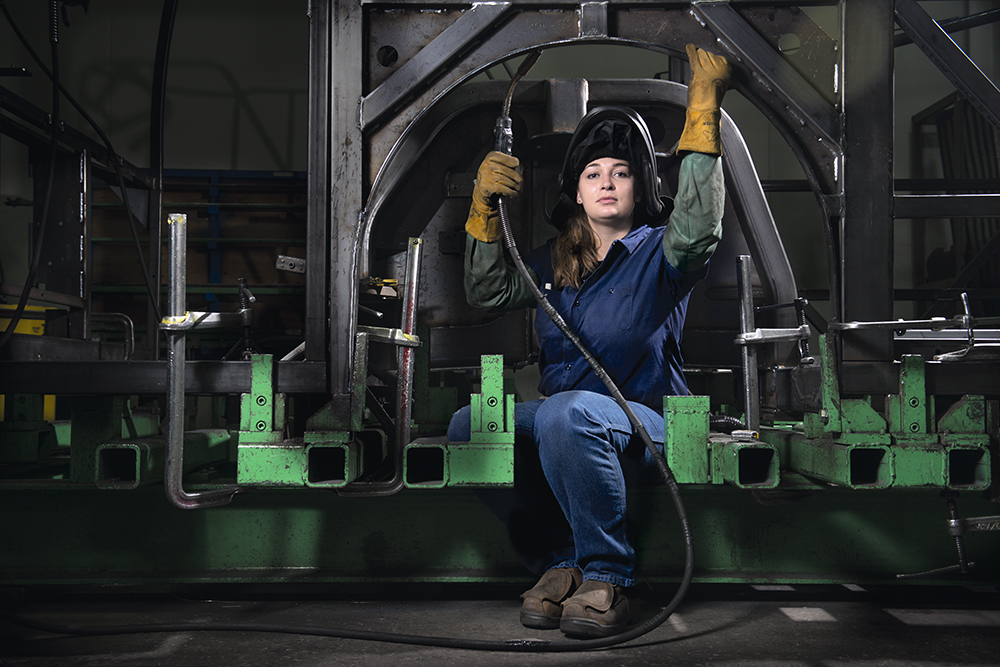 ©Deanne Fitzmaurice, CHANCY DAVIS, the only woman welder at the New Flyer Industries bus factory in St. Cloud, Minnesota. “For me personally, I can’t sit behind a desk. This, along with my good attention to detail, made welding a right fit for me. There are people out there who are old-fashioned and set in their ways and think this isn’t a women’s field. I want to show them that people can do whatever they set their minds to by being a living example of this.” 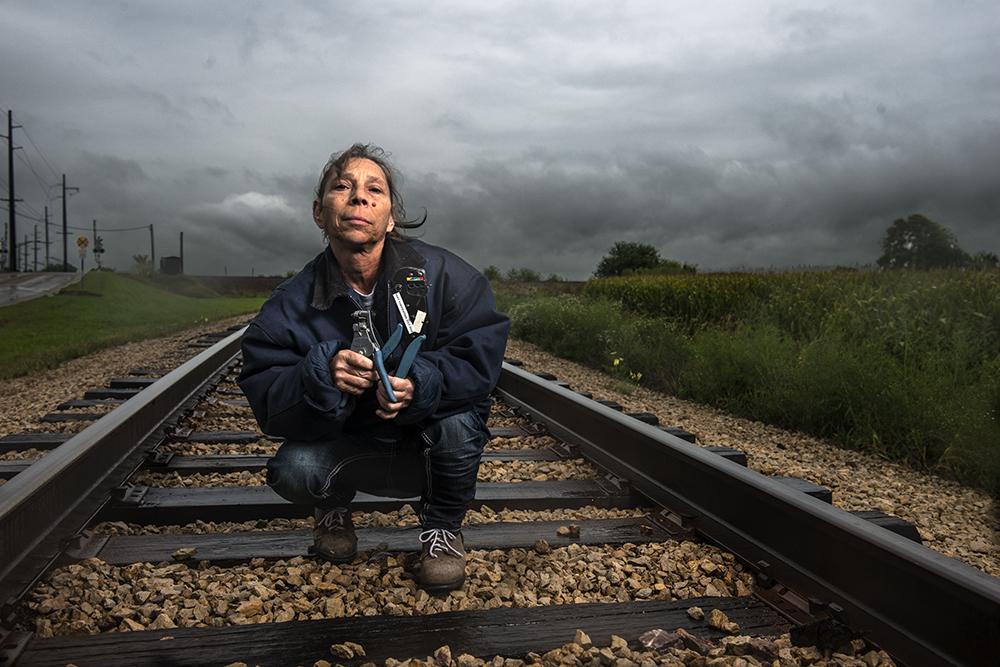 ©Deanne Fitzmaurice, STACEY CORCORAN, an electrician at the Nippon Sharyo railcar manufacturing facility in Rochelle, Illinois. Stacey has been building trains for more than 20 years. “To me, it’s not just a job. I really care about the trains, I always have. Doing the electrical work, it’s like putting art together. You want it to be flawless and beautiful. I’m only four foot four, I build trains, and I’m a girl. What more proof do you need?” 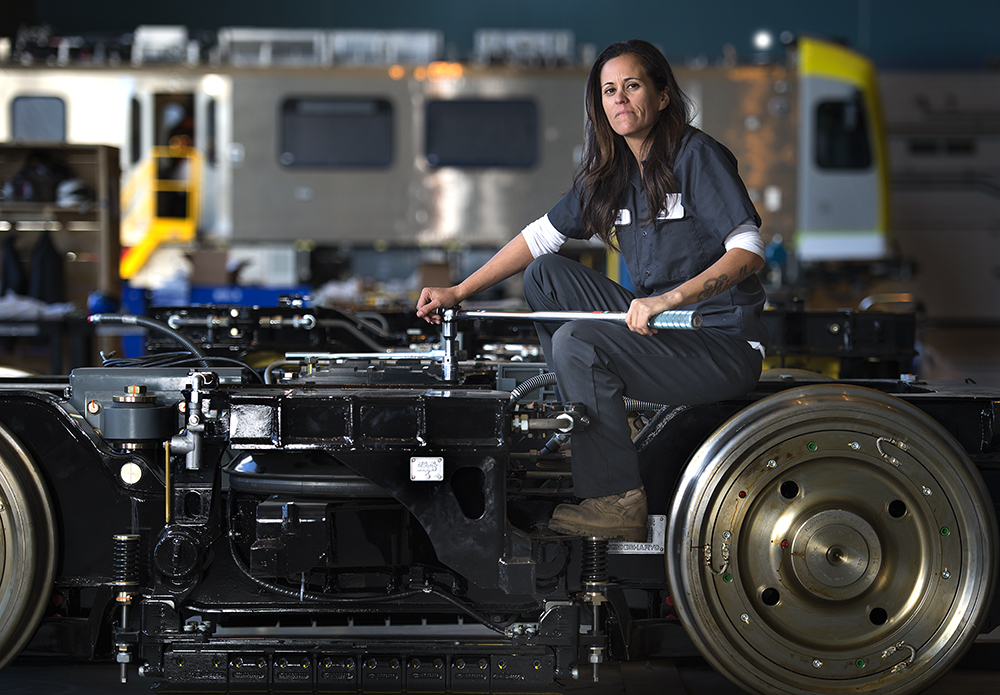 ©Deanne Fitzmaurice, AMI RASMUSSEN, an interior assembly foreman at the Kinkisharyo railcar factory in Palmdale, California. “We probably touch the trains more than anyone else. We install seats, the rear locker, grab bars, pretty much anything you grab onto inside the train. It is very intimidating to see a factory full of men. But, I was in charge of 78 guys in the military, so I thought, “I got this.” 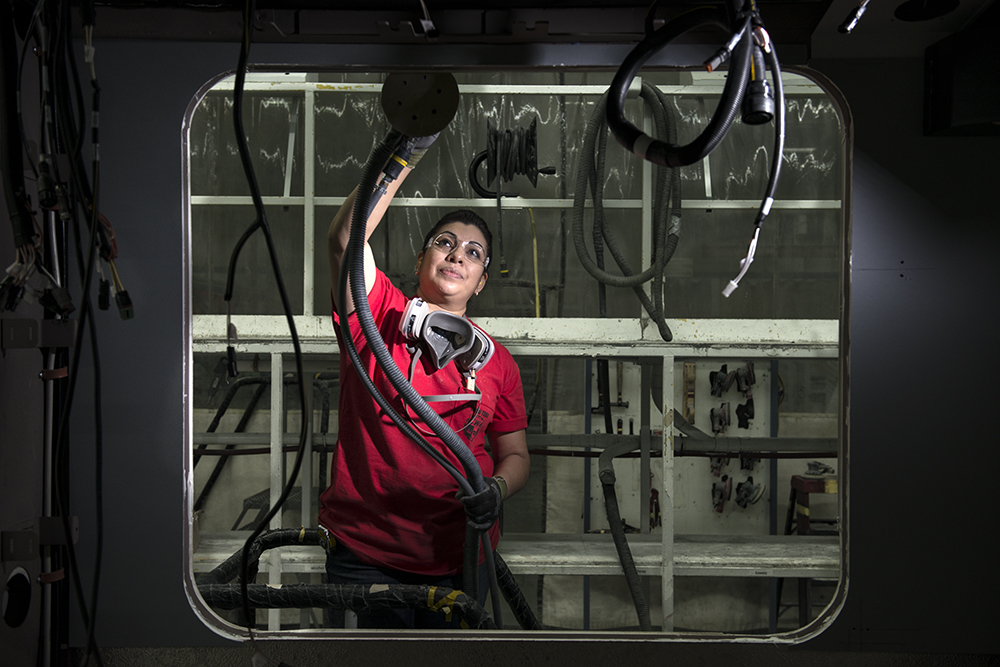 ©Deanne Fitzmaurice, JUDITH MEJIA MELENDEZ, a painter at the New Flyer Industries bus factory in St. Cloud, Minnesota. Judith, a Latina who primarily speaks Spanish, transitioned into transit manufacturing later in her career. Working in transit manufacturing, a largely male dominated field, Judith has learned to grow and challenge preconceived notions of what a woman can and cannot do. “It was a risk I was taking, and it has been worth it. I think anyone in the world can do this job.” 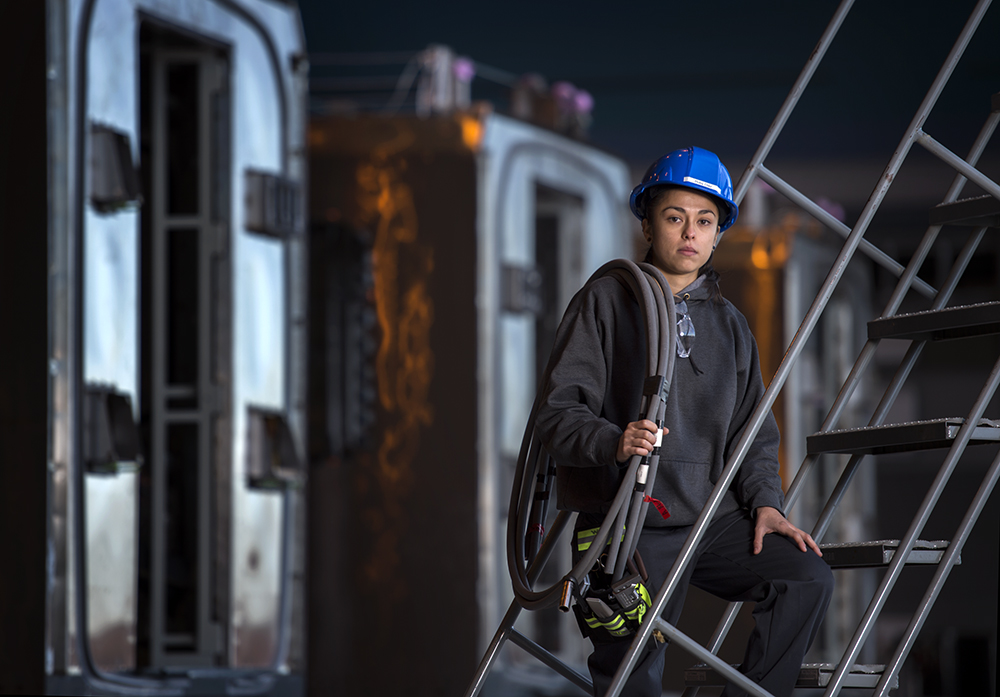 ©Deanne Fitzmaurice, RUBY DIAZ, a quality control technician at the Kinkisharyo railcar factory in Palmdale, California. Ruby works on running and routing electrical wires through metal pipes throughout the railcars. “When I was little, I learned how to fix stuff; I had my own little motor scooter. [This work is] hard for women, they feel they don’t have enough strength, or power, or dedication. [While] it is a tough and heavy job, women can work just as hard as anybody.” 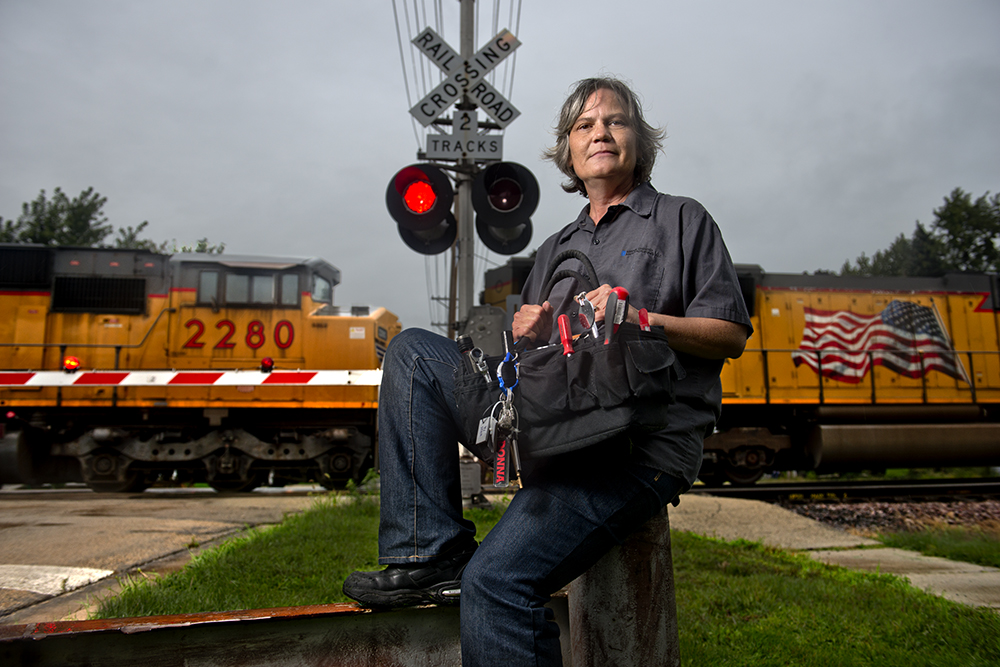 ©Deanne Fitzmaurice, DONNA COMP-PENWARDEN, a quality interior inspector at the Nippon Sharyo railcar factory in Rochelle, Illinois. “I went to school to be a cop back in 1980 and worked as a nuclear armed guard for 10 years. Now I inspect the interior and exterior of the final car. I take the job seriously, because it’s public transportation. Women can do anything we’re trained to do. All persons should be treated and trained equally.” 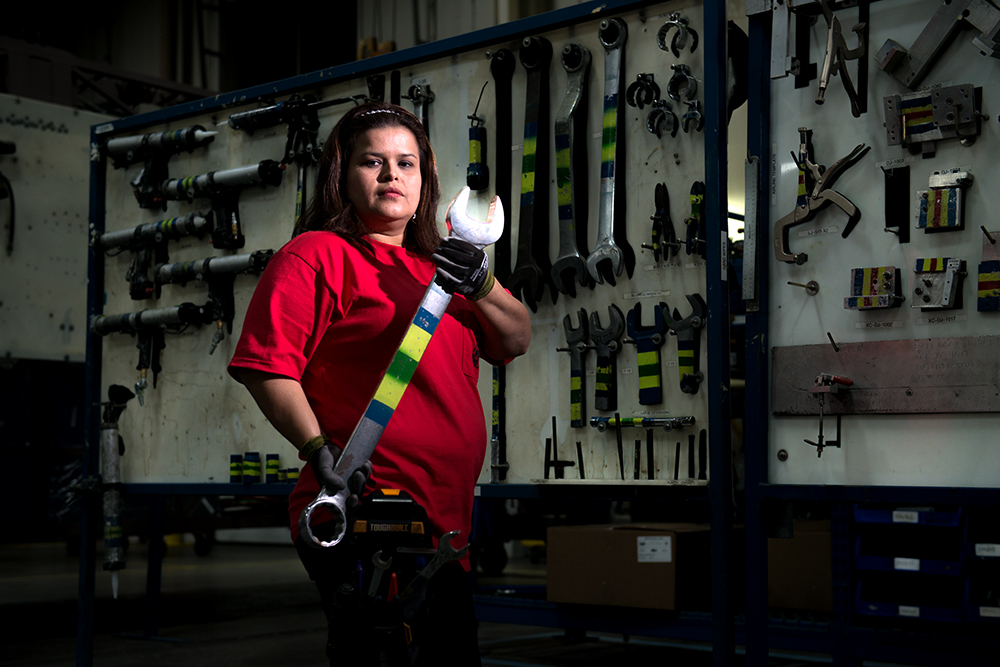 ©Deanne Fitzmaurice, BRENDA MARTINEZ SCHROEDER, an audit line worker at the New Flyer Industries bus factory in St. Cloud, Minnesota. Brenda is a proud member of the Communications Workers of America Local 7304 at New Flyer. She works in the part of the factory that quality-checks subcomponents of the buses. This job has enabled her to provide a good life for her family. 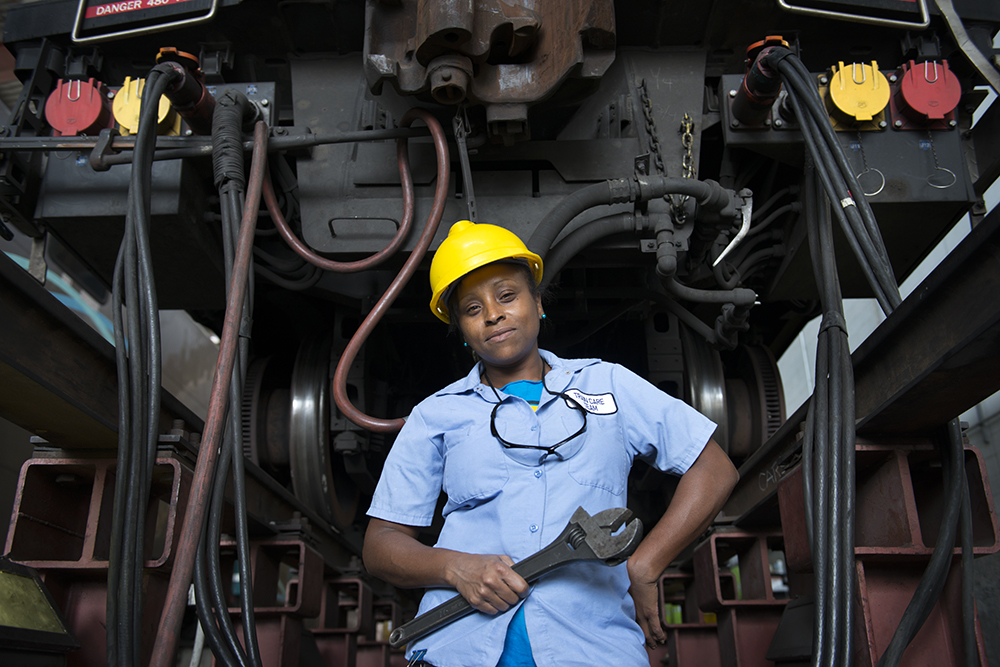 ©Deanne Fitzmaurice, LILLA WALLACE, a cleaning specialist at a railcar refurbishment facility in Los Angeles. “I used to do hair at a salon. Now I work inside a garage with my co-worker Fatima. We do two cars a day–the whole thing! It’s detailing, elbow grease, hard cleaning, hard work. If we put our minds to it, we can build anything–freeways, trains, etc. I could see myself being a mechanic one day. You can work hard and still retain your femininity.” 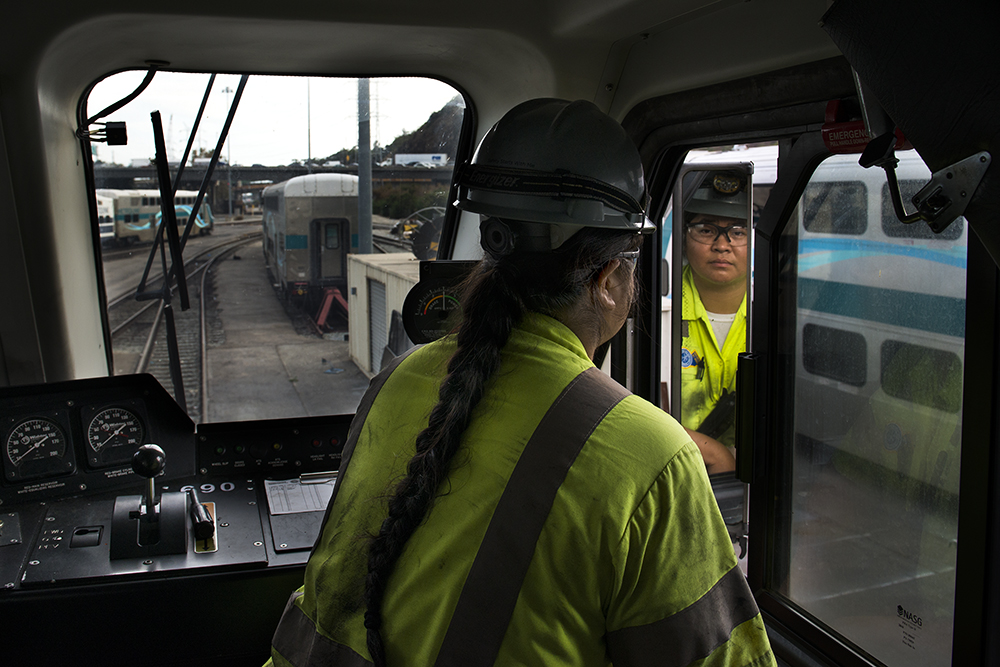 ©Deanne Fitzmaurice, JAY FATIMA TAPIA, equipment operator at a Bombardier railcar maintenance facility in Los Angeles. “I love hands-on work. My dad wanted me to be a doctor or a nurse like my sisters. But I wanted to work outside. Now I’m an equipment operator, and driving is my favorite thing to do. You move the railcars up and down the yard, with many safety procedures. A woman can build everything a man can build–and better.”

NEXT | The 2017 Women’s March Exhibition, Part 10 >
< Her Feet Planted Firmly on the Ground at the Houston Center for Photography | PREV