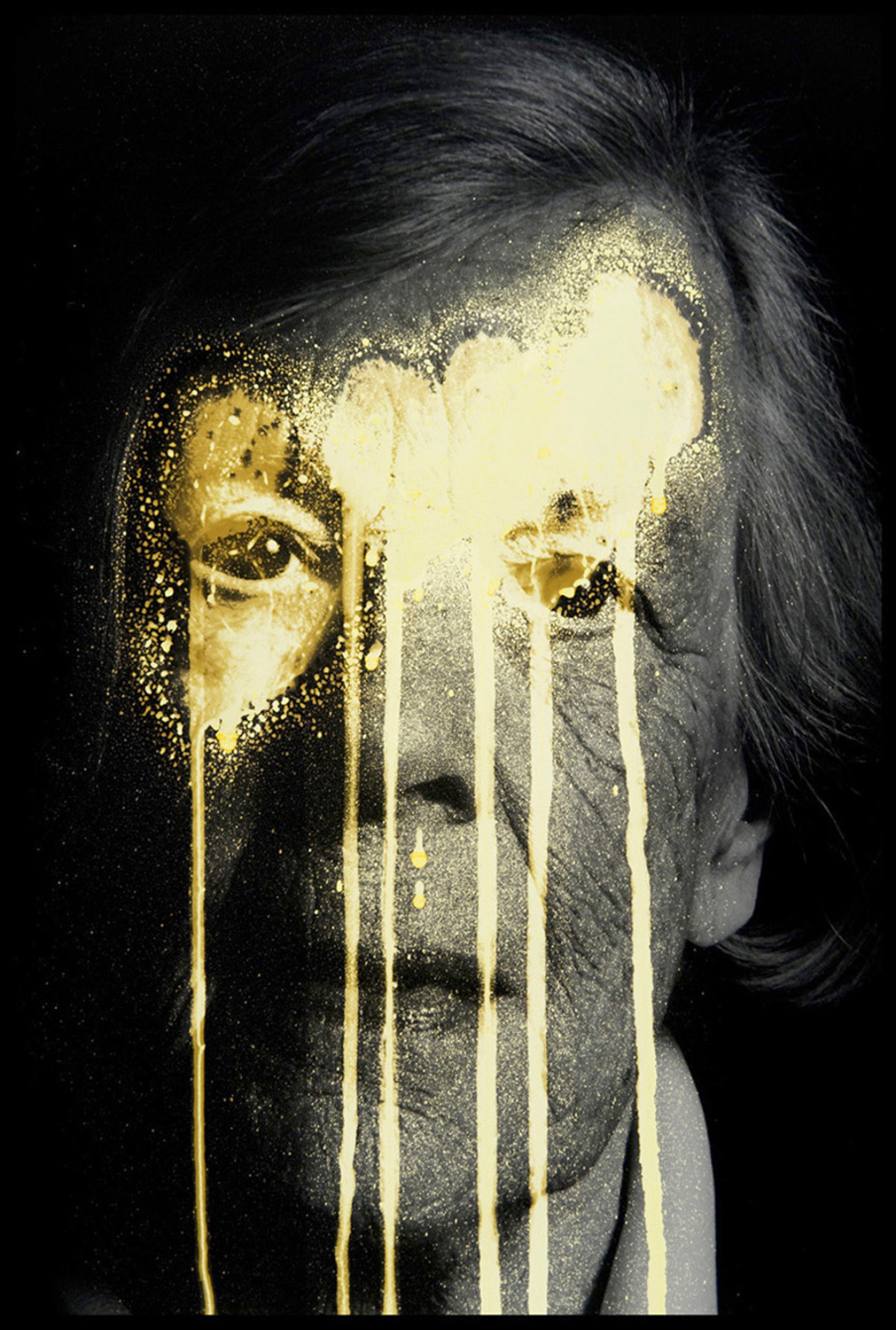 For me, Outspoken is personal. For years, I never said a thing. I kept quiet. I was a “good girl.” The camera gave me my voice, which had been silenced for years. Not anymore. – Curator Marky Kauffmann

We are witnessing great change in our social and political arenas concerning the lives of women. In this remarkable seismic shift of finally having our voices heard, photographer and educator, Marky Kauffmann, has curated the exhibition, Outspoken: Seven Women Photographers, featuring the work of seven women photographers who seek to capture the voices of women and girls. Opening at the Hess Gallery at Pine Manor College, the exhibition will have an opening reception on January 18th, at 7pm and will run through February 28th, 2018. The show includes work by Marky Kauffmann, Rania Matar, Nancy Grace Horton, Emily Schiffer,  Tira Kahn, Blake Fitch, and Nadine Boughton.

All of the artists have a personal focus on the female experience, ranging from the poignancy of aging, the humor of domestic life, the revealing intimate spaces of young women, the trying on of adolescence, and the quiet beauty of growing up. The photographers reveal truths about gender, society, and culture.

Marky Kauffmann, a Massachusetts Cultural Council Fellow in Photography, presents provocative large-scale portraits of older women as part of her series titled “Lost Beauty.” These altered faces challenge the viewer to question our cultural obsession with youth and beauty in spite of the inevitable effects of aging. 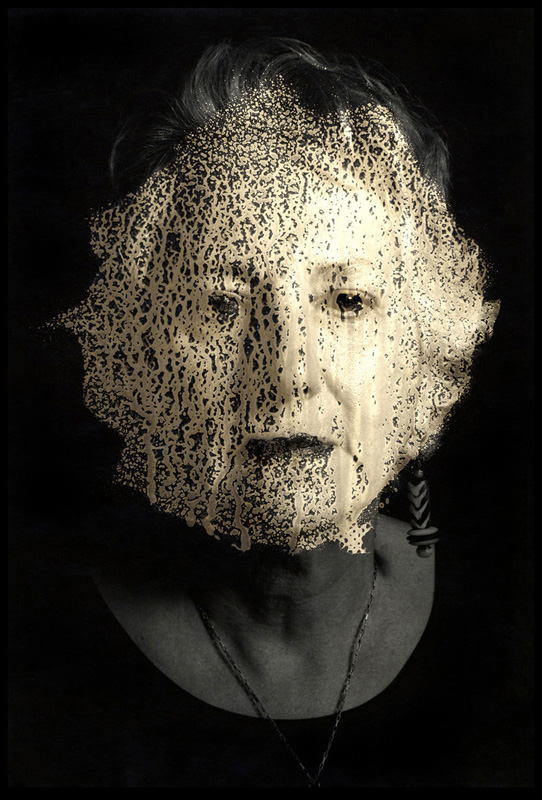 Rania Matar, a two-time Massachusetts Cultural Council Fellow in Photography, shows large color photographs from her series titled A Girl and Her Room. These intimate portraits capture the passage from girlhood to adulthood in both American and Middle Eastern cultures, focusing on the universality of growing up. 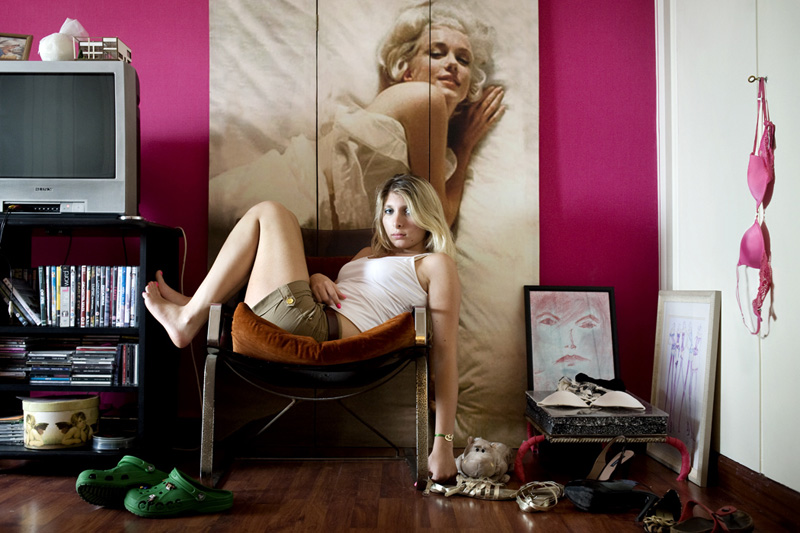 As a mother of teenage daughters I watch their passage from girlhood into adulthood, fascinated with the transformation taking place, the adult personality taking shape and a gradual self-consciousness replacing the carefree world they had known and lived in so far. I started photographing them and their girlfriends, and quickly realized how aware they were of each other’s presence, and how much the group affected the identity they were portraying to the world. From this recognition the idea of photographing each girl alone, by herself, emerged.

I originally let the young women chose where they wanted to be photographed and after a couple of them chose their bedroom, I realized that was the nexus of a project. The room was a metaphor, an extension of the girl, but also the girl seemed to be part of the room, to fit in, just like everything else in the material and emotional space.

While I started this work with my daughters and their friends, and with daughters of my friends, I eventually moved away from only photographing girls that I knew well. I enjoyed discovering new girls and building with them a photographer/model relationship with no expectation or holding back from either of us. I always spent time with each girl, so she was comfortable with me and eventually the photography session became a beautiful and intimate collaboration. I was discovering a person on the cusp on becoming an adult, but desperately holding on to the child she barely outgrew, a person on the edge between two worlds, trying to come to terms with this transitional time in her life and adjust to the person she is turning into. Posters of rock stars, political leaders or top models were displayed above a bed covered with stuffed animals; mirrors were an important part of the room, a reflection of the girls’ image to the world; personal objects, photos, clothes everywhere, chaotic jumbles of pink and black make-up and just stuff, seemed to give a sense of security and warmth to the room like a womb within the outside world.

I initially started this work focusing on teenage girls in the United States and eventually expanded the project to include girls from the two worlds I am most familiar with, the two worlds I experienced myself as a young woman: the United States and the Middle East. This is how this project became personal to me. I became fascinated with the similar issues girls at that age face, regardless of culture, religion and background, as they learn to deal with all the pressures that arise as they become conscious and aware of the surrounding world wherever this may be.

Being with those young women in the privacy of their world gave me a unique peek into their private lives and their inner selves. They sensed that I was not judging them and became an active part of the project. Their frankness and generosity in sharing access was a privilege that they have extended to me but also to all the viewers of this work. – Rania Matar 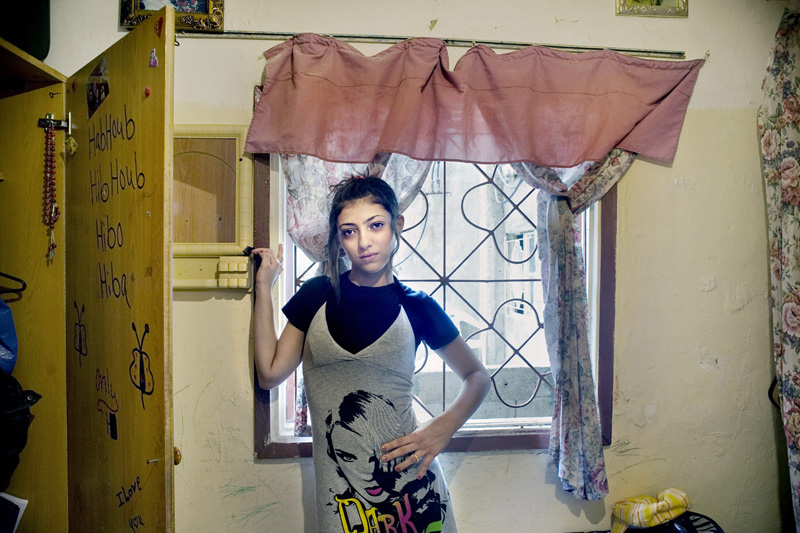 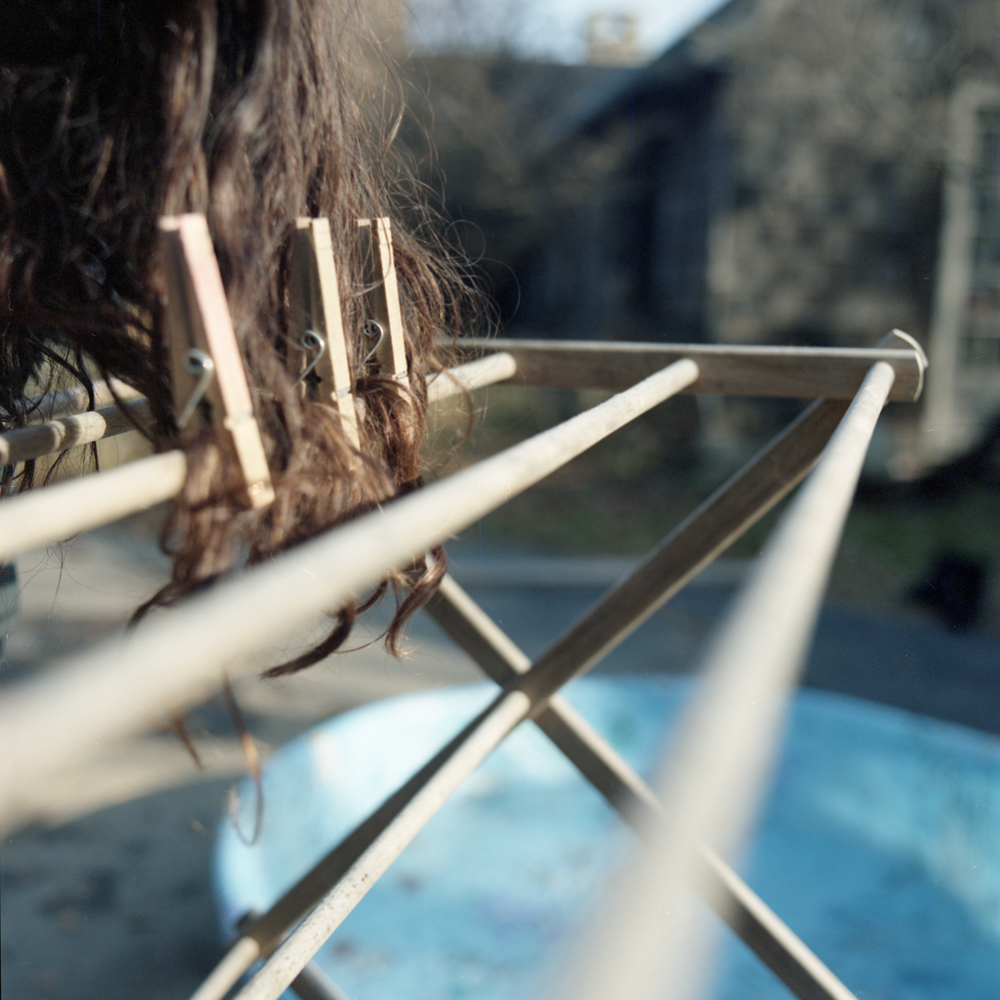 My photographs are investigations of female gender roles as influenced by American culture and mass media. This body of work is a 21st century extension of feminist concerns regarding the media’s portrayal of women. More specifically, I am interested in the explicit and implicit power relations that are constructed and maintained by mediatized systems of representation.

Using narrative fragments that confound the conventions of popular culture, I explore the norms of female behavior—and misbehavior. I am inspired by cinema, TV, magazines and personal experiences. My creative process is planned but unscripted. It is exploratory, but with firm goals and boundaries. Props, models (who are often friends), and locations act as catalysts for the development of strong, graphic compositions that suggest fragments of an untold story.

I intend my work to confront the viewer with their hidden preconceptions with regard to women’s constructed roles within society. – Nancy Grace Horton 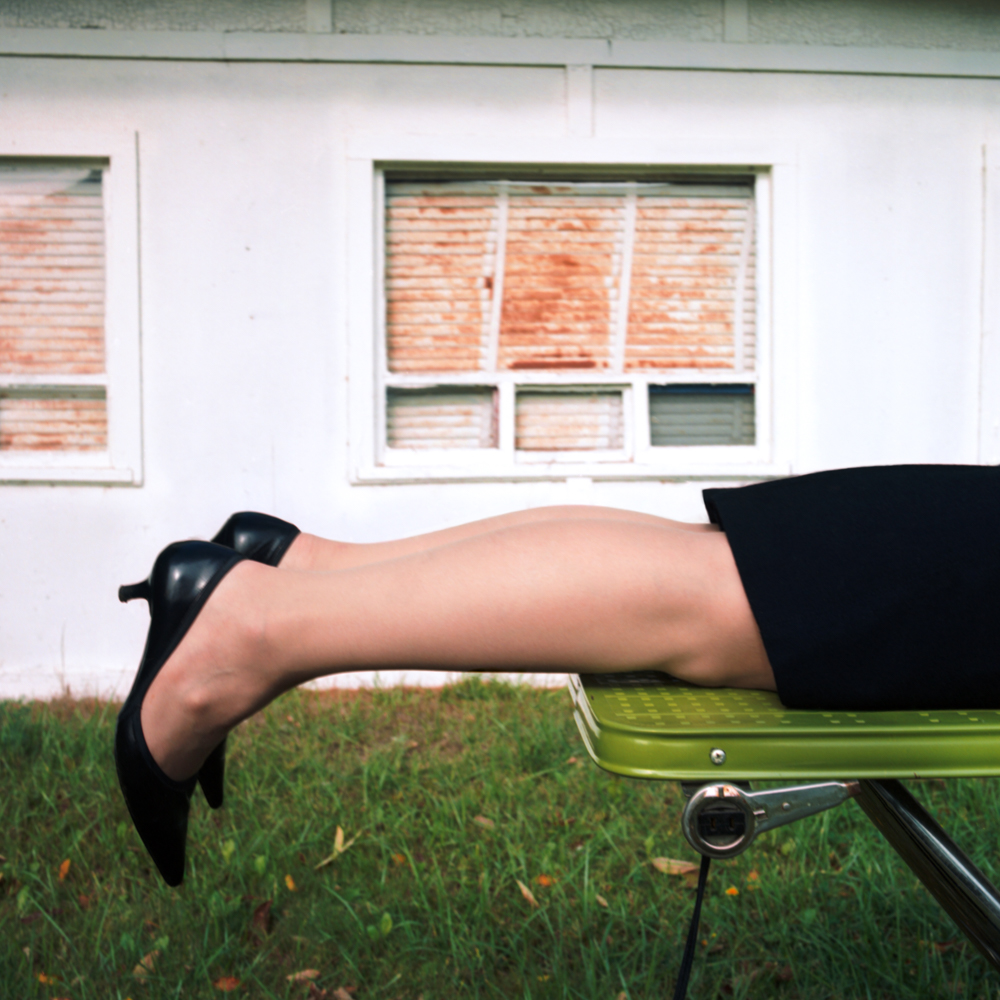 Emily Schiffer, a Magnum Foundation grant winner and Fulbright Fellow, presents intimate portraits of Native American girls on a Cheyenne reservation in South Dakota. Schiffer says of her subjects, “In these early years, girls express themselves with a frankness and openness that often dissipates in adolescence,” and she tries to capture their “joy, love, and pain.” 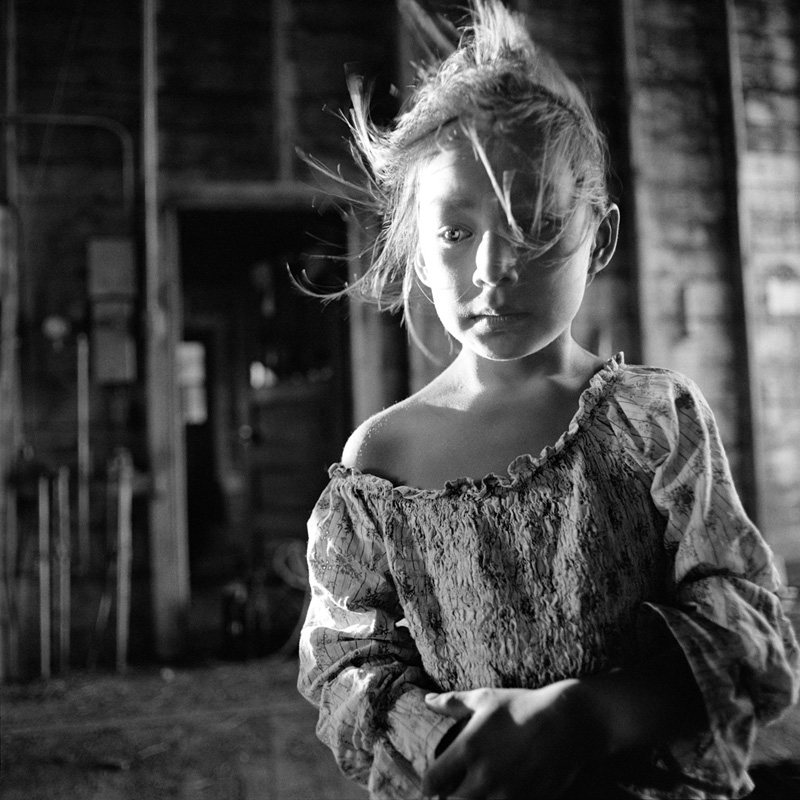 In 2005, I founded a photography program for youth on the Cheyenne River reservation in South Dakota, USA. In this ongoing program, my students and I are all subjects of each other’s work.

Our favorite locations are fields and abandoned buildings on the fringe of town, forgotten places thick with the past that lend themselves to imaginary games and textured photographs.

Children have a unique ability to experience love, joy, and pain simultaneously, without compartmentalizing their experiences. I aim to convey this complexity.  In these early years, Girls express themselves with a frankness and openness that often dissipates with adolescence. These images explore play as a vehicle through which girls reveal and negotiate their emotions, traumas, and desires. I have chosen to focus on children’s relationships with their environment and with each other, because it is an essential part of life on a reservation that is often overlooked by both residents and outsiders. – Emily Shiffer 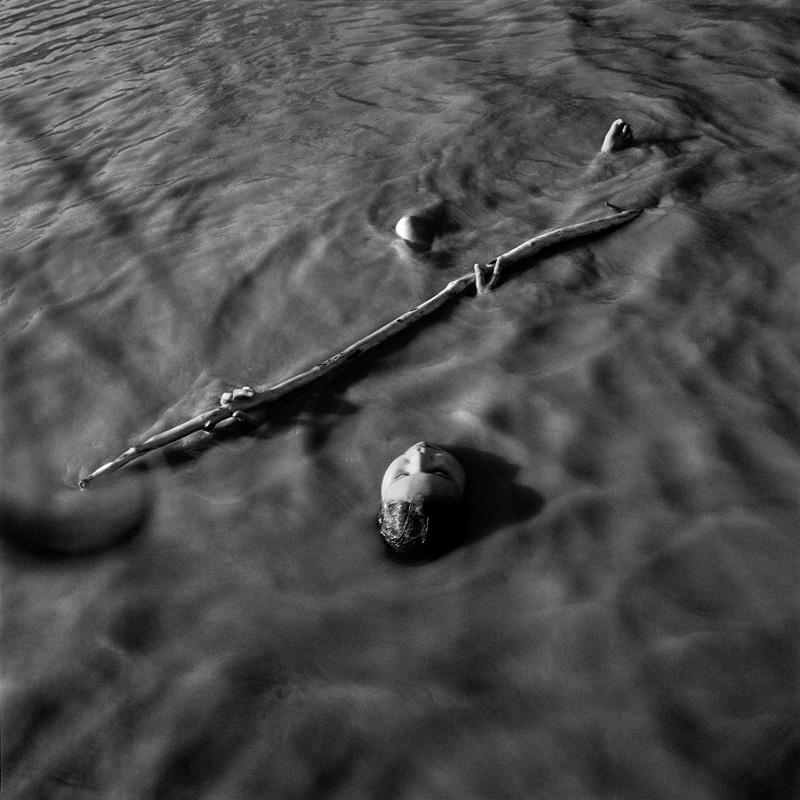 Tira Khan, a video producer and photographer at Sugarhouse Media, documents moments of family life. Her candid portraits of her daughters and of others explore the truth of prepubescent lives. 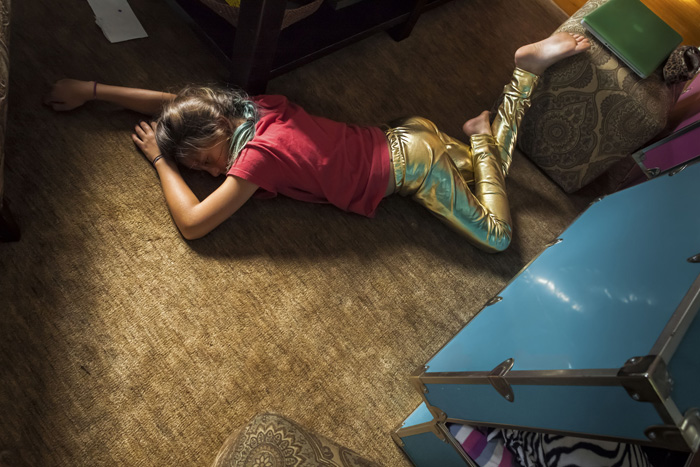 I began photographing my three daughters because I wanted a portrait to hang on my living room wall. I envisioned them freshly bathed, dressed and happy, all at the same time. For me, that was an impossible trifecta. Instead, I began to photograph moments more authentic — when my girls were wrapped in their own thoughts, oblivious to me.

I saw my photographs as a way of studying the girls in their natural habitat, as a journalist might. Not wanting to bother them, I never asked my daughters to stop what they were doing, and they didn’t seem to mind me snapping away. More likely, I was too timid to ask them to pose. Though had I asked, I’m sure they would have refused.

Over the years, people would encourage me to photograph something more important, something that mattered to the external world. But I found myself drawn to these moments when my daughters were introspective — perhaps I thought taking their photo would lead mecloser to their inner world. Children and adolescents have a seriousness about them that we, as a culture, sometimes forget. I paid attention when not much was “going on.”

As the girls aged, I realized that these small moments added up to something much larger — the development of character, personality. Now, as I feel more confident, they are more confident too. We see each other head-on, unapologetic in our flaws. But we are also, at times, more wary. I hope these small moments — witnessed in these photos — show personal growth, enabling them to interact with the world beyond home and family.

As Susan Sontag says: “Photographs are really experiences captured.” I feel like these photos captured early family life and who they have become. The childhood “magic” has morphed into teen melodrama and more. It’s now a different kind of energy. We grew up together. – Tira Kahn 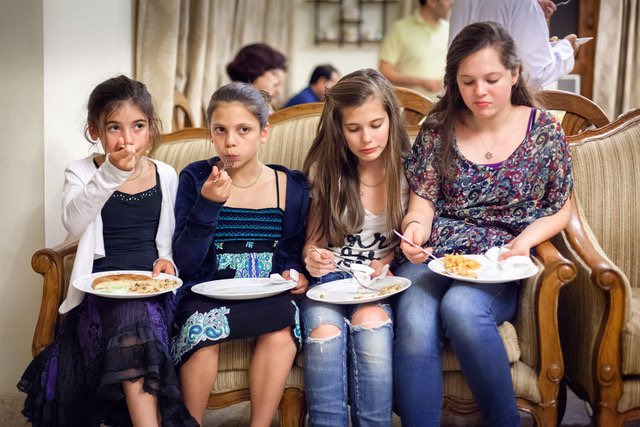 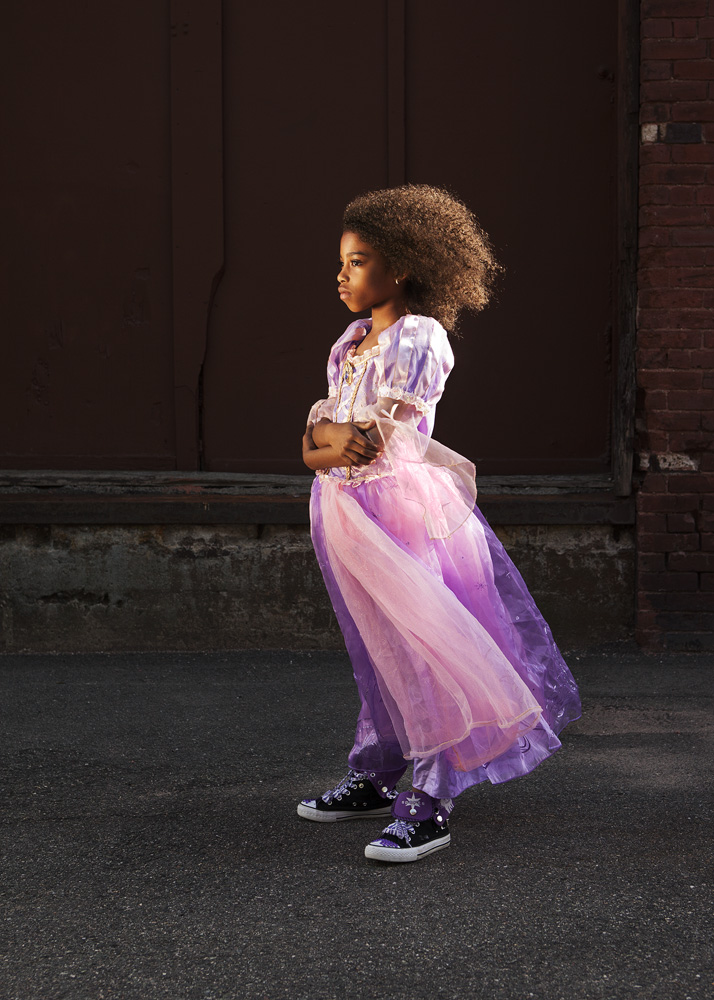 Dress Rehearsal examines a contemporary rite of passage when young girls immerse themselves in all-things princess. These photographs are quiet constructions of girls dressing up as princesses and “trying on”  femininity for the first time. Additionally, these photographs capture the girls’ exposure to various aspects of gender indoctrination and how they embrace a budding sense of power and strength.  These surprisingly sophisticated young girls, excited and empowered by wearing princess outfits, expand the traditional notion of girlhood, and , unwittingly emerge as new, modern constructs of the princess warrior. – Blake Fitch 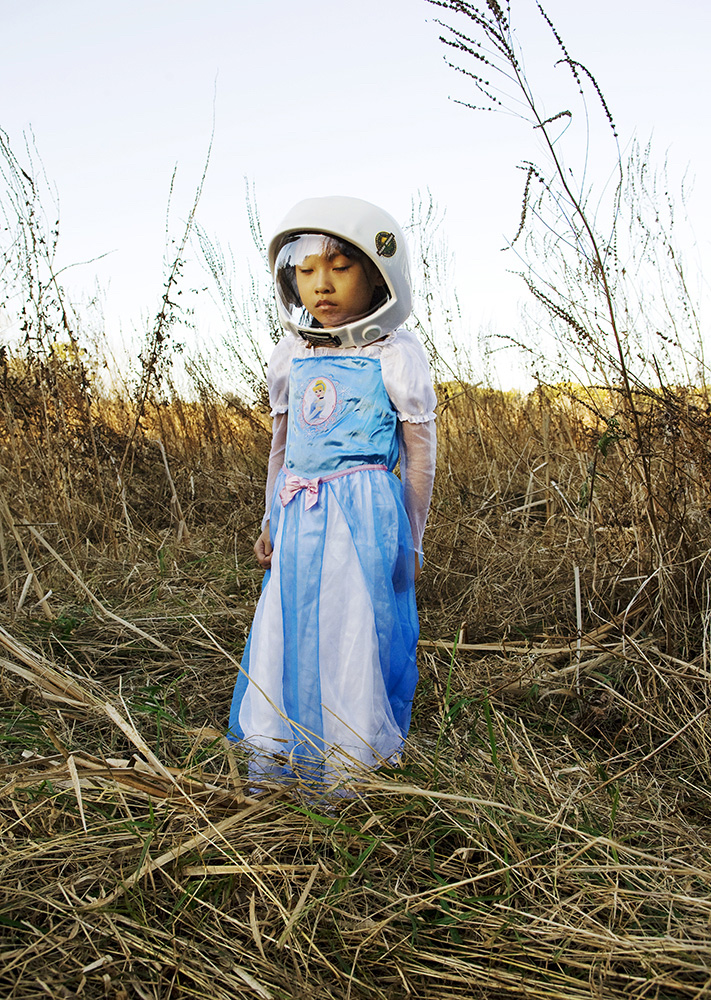 Nadine Boughton images, from her “Fortune and the Feminine” series, deconstruct mid-century advertising and its messages about gender, power, beauty, and longing. Boughton is a four-time “Top 50” Finalist in Photolucida’s Critical Mass competition. 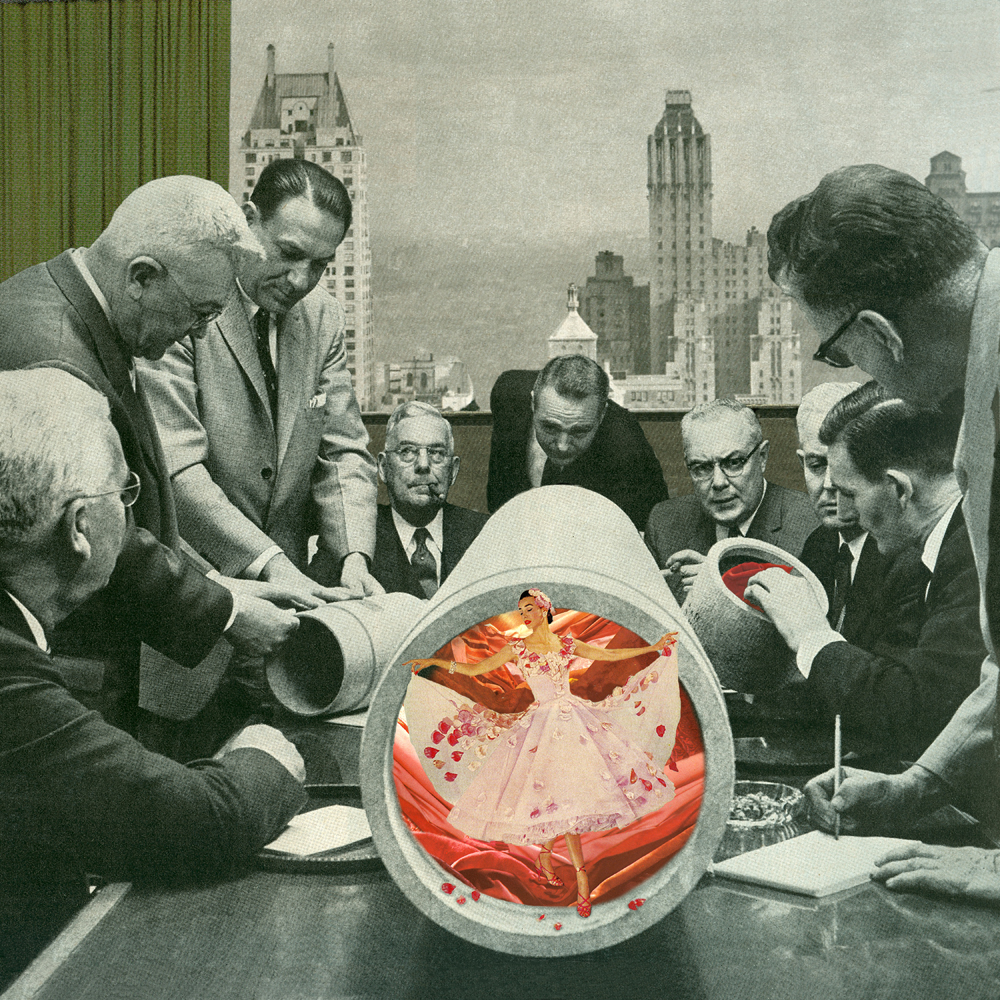 In Fortune and the Feminine, my focus is on gender polarities as depicted in popular magazines of the 1950’s and early 1960’s.

This series is an homage both to the handsome men in Fortune who look like all the fathers I watched in their big suits and briefcases, carpooling to a foreign land; and to the community of mothers who served egg salad sandwiches on the green lawns of suburbia.- Nadine Boughton 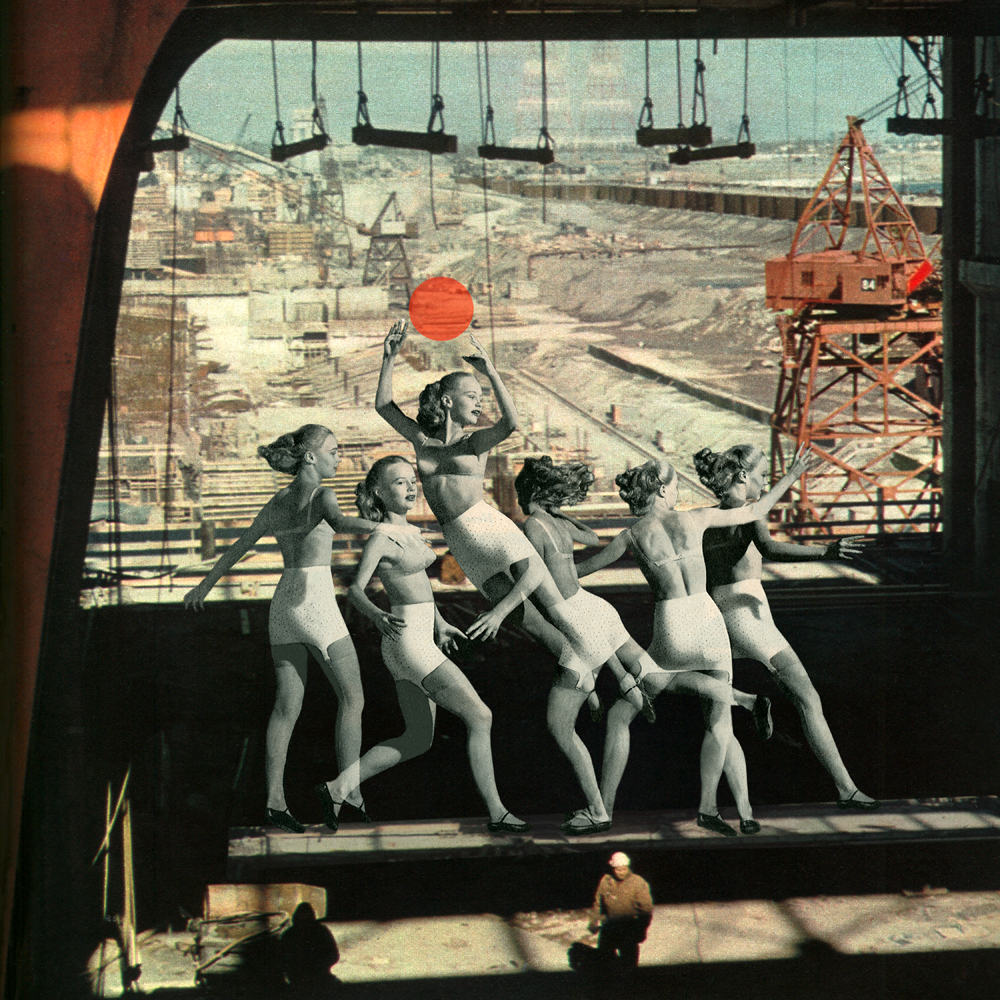