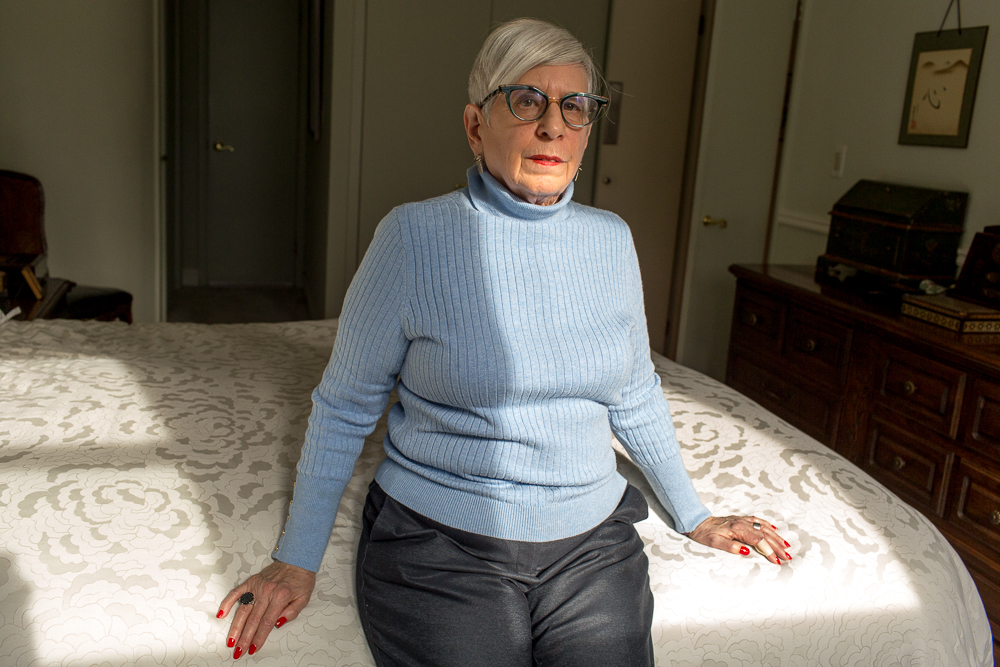 ©Susan Rosenberg Jones, Carol: “I am very grateful. He was on home hospice. He did not want to be in a hospital bed and he was in our bed. I slept with him. He wanted to be able to touch me and this was sometimes very hard for me. At one point I almost said to the hospice social worker, I don’t think I can do this, but I stopped within two seconds and said, ‘ I’m doing this – do not place him anywhere. I don’t want him to be placed anywhere. I want him to be here ‘ “

I always think that a photographer’s best work comes from worlds we already know and can bring deep thinking  and perspective to. Photographer Susan Rosenberg Jones has a legacy of creating such projects as she considers the humanity that surrounds her. With her project, Building 1, she photographed her neighbors in the apartment building she resided in for over 25 years. Later, after finding love against after the loss of her first husband, she visually examined her second husband with humor, curiosity, and love. Her newest project is a series of portraits of those who have lost their partners in love. Widow/er is an poignant and elegant portrait series that speaks to the past and the future, to loss and new beginnings, all elements that speak to the complexity of being human. 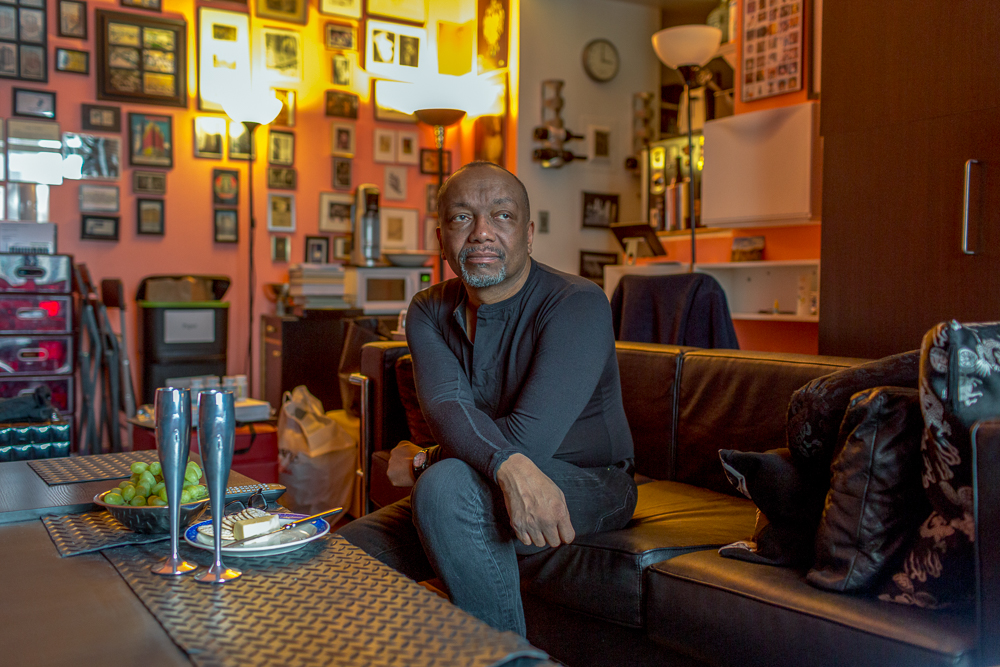 ©Susan Rosenberg Jones, Darrell: “We had a cocktail hour every Saturday evening after Roger came home from church and before going out to dinner. It usually included wine or champagne, cheese, some fruit, nuts, and crackers. We would have some unobtrusive music on. This would be our time, every week, to really talk to each other. About life, our shared or personal histories or any plans we had for the future.”

I am happily remarried since 2012 but was widowed in 2008. There is nothing like the grief one experiences after a life partner passes away. When I lost my first husband, I searched for books and articles addressing this particular loss- I was looking for ideas on coping techniques from others who’d had that experience. There wasn’t much. I meet with widows and widowers of all ages, gay and straight, having been in legal marriages or committed partnerships. We have a conversation, and make a portrait. This process is emotionally satisfying as my sitters and I examine together how a marriage can shape us going forward. I hope that by sharing their stories, those suffering this profound loss – whether recently or not – will take comfort in recognition and shared experience. 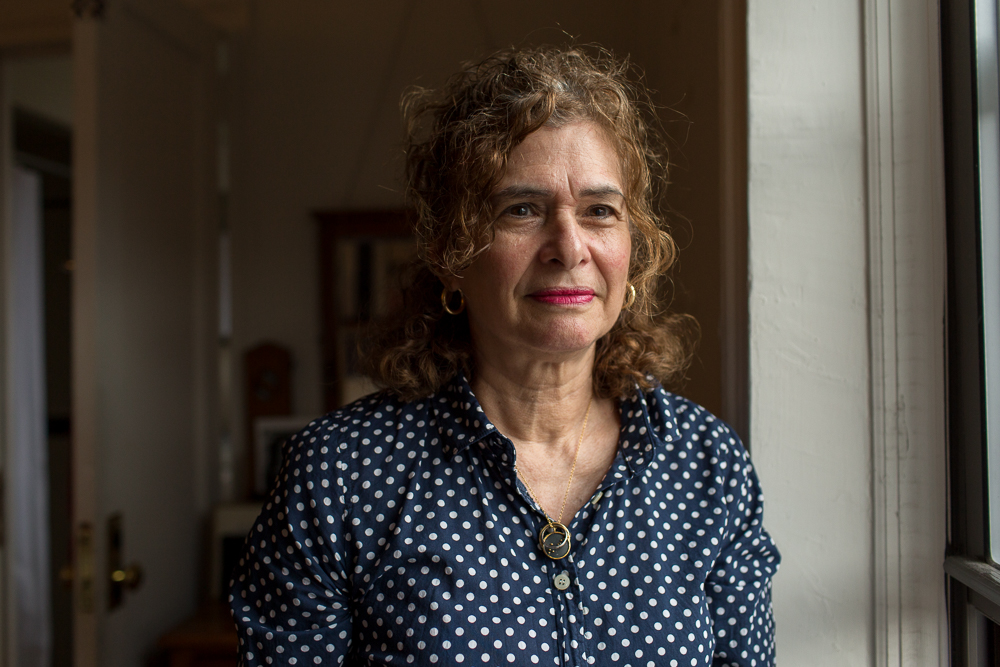 ©Susan Rosenberg Jones, Donna: “Part of me is lost. I don’t feel that I’m alone, but I miss him very much. You know, just conversations. I’m at the crosswalks and this part of my life right now – I’m not making many decisions. I think some people really don’t see a future. I do. I don’t know what it is and I’m not going to rush to make a plan.”

Susan Rosenberg Jones was born and raised in Boston and moved to New York City in 1976. She earned a BS in Education from Lesley College and then
enrolled in the School of Visual Arts. After working in a NYC lab as a custom black and white printer, Susan began working in the stock photography industry, where she had a long career.

She returned to her photography and took critique courses at ICP. She worked on various portrait projects: women of a certain age, couples who’d been together for many years, and in 2011 began work on Building 1, a series about her neighbors in the apartment complex in Tribeca where she’d lived since 1984. Building 1 was exhibited in a solo show at Camerawork Gallery, Scranton, PA in the fall of 2016.

In 2008 Susan lost her husband of 30 years, after a long illness. She met Joel in 2009 and they married in 2012. Her portrait project Second Time Around celebrates the quirks and discoveries of her new relationship. In 2016, Second Time Around was selected for the Portfolio Showcase 9 exhibit and catalogue at the Center for Fine Art Photography, Ft Collins, CO. She was awarded Honorable Mention in the 2017 Baxter Street at CCNY Annual Juried Competition, and again in 2017, she was honored as a Critical Mass Top 50 Photographer.

Susan began working on The Widow/er Project in March of 2018. The work will be shown in a solo show at the Griffin Museum’s Griffin Gallery opening October 24, 2019. “Melissa” from this series has been published in the May 2019 issue of Fraction Magazine, the 11th anniversary issue. 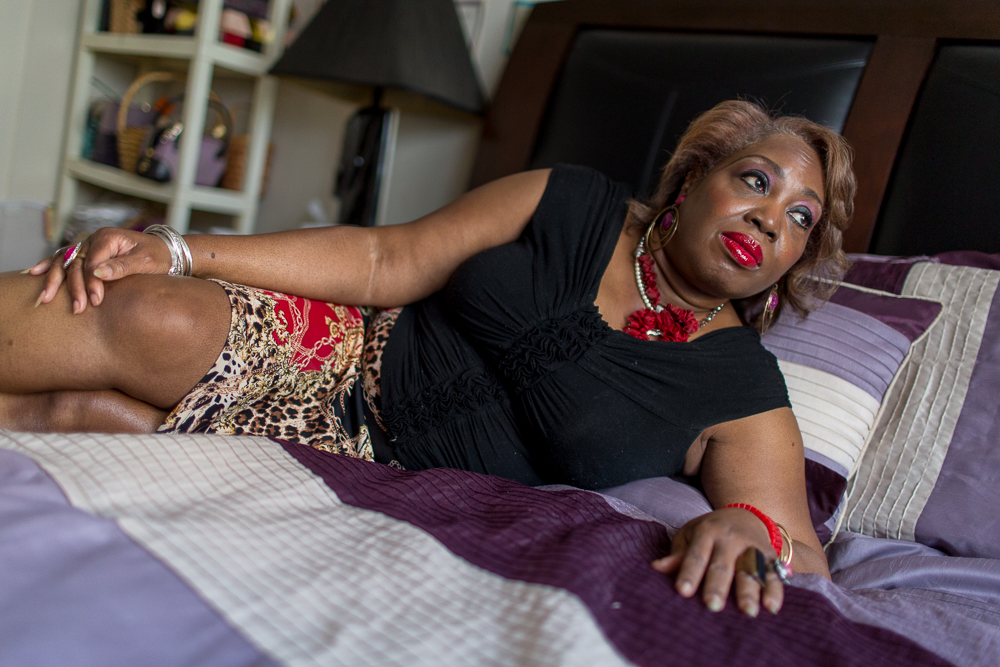 ©Susan Rosenberg Jones, Edith: “Every Friday I have breakfast food for dinner because it was a Friday that he died and I made him brunch. I made this brunch and that’s when he asked me, you know, you usually do Sunday brunch, why Friday, you know something I don’t know? I said, no, I just figured that we should do this. He said I don’t know- you’re up to something. I said no… and so now every Friday I’m alone, and I have breakfast food on a Friday.” 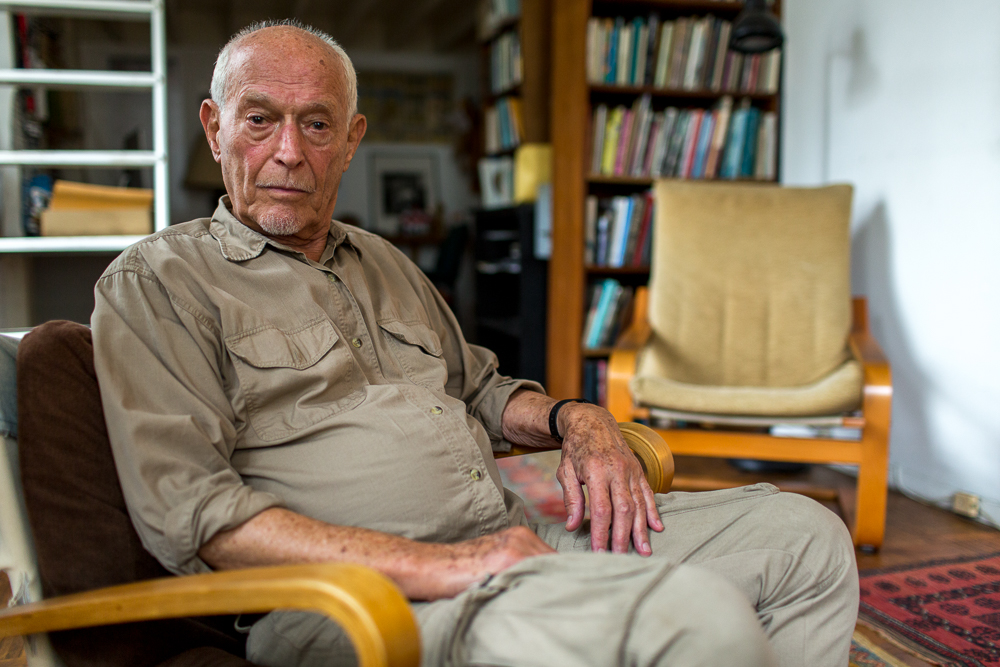 ©Susan Rosenberg Jones, Edward: “It’s like everything about romantic love was out the window. It had nothing to do with that. I understand seeing eye dogs with their masters and mistresses, how devoted they are. And how concerned, and how they have to watch every second and I understand it completely. It was truly…we had a wonderful life together. I said, to the doctor ‘Well, maybe we’ll go to Europe’. And she said, ‘go, go’! And of course she meant it was temporary…and so we went. That was wonderful. It was like an oasis in the middle of the desert. And then it was downhill from there.” 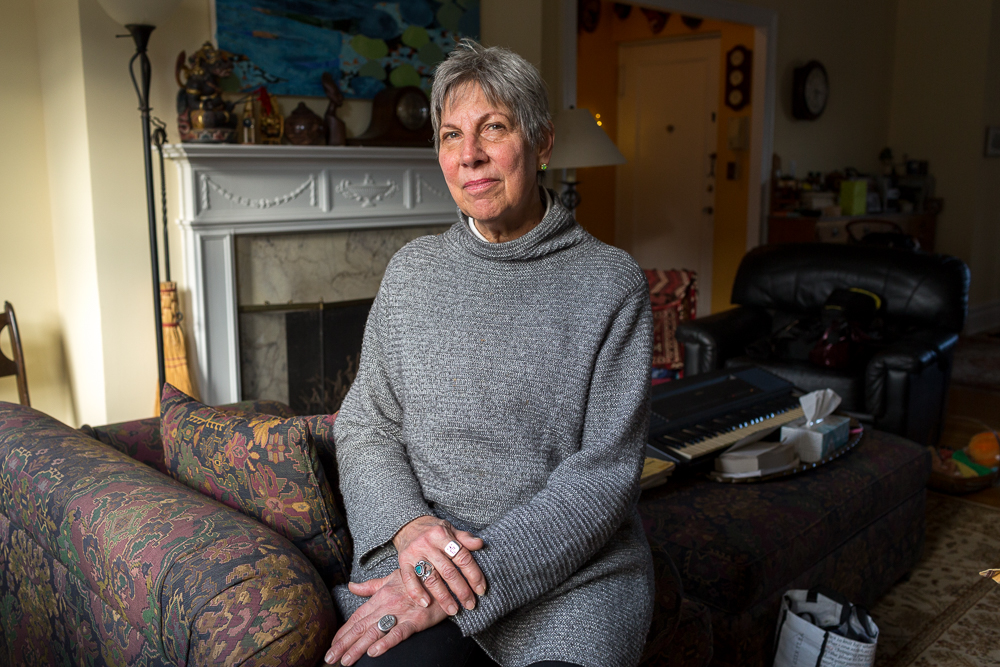 ©Susan Rosenberg Jones, Gail: “I don’t think his doctors were really treating the whole patient. I think maybe he could have used an antidepressant. I think they weren’t managing his care as well as perhaps they might have. And there was nothing I could do. All we could do is live out our lives. He was not the man I married, but I was there for him and did what I could. I wish I’d done more. I wish I’d been kinder, frankly. But, I did as well as I could and he did as well as he could too. I mean – we loved each other to the end. We weren’t always as nice to each other as we should have been. So I try to remember that.” 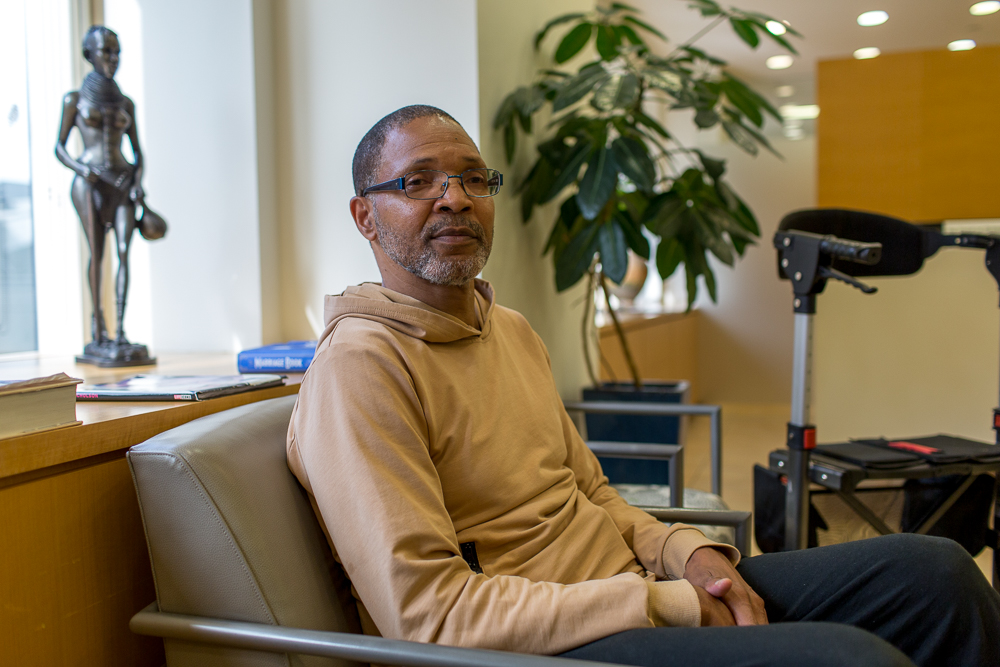 ©Susan Rosenberg Jones, John: “I have always been seen as a strong person, but never thought I would ever need therapy until it got it. You know, with a black family, therapy is not high on the list of priorities, but a black family needs therapy as much as anybody else.” 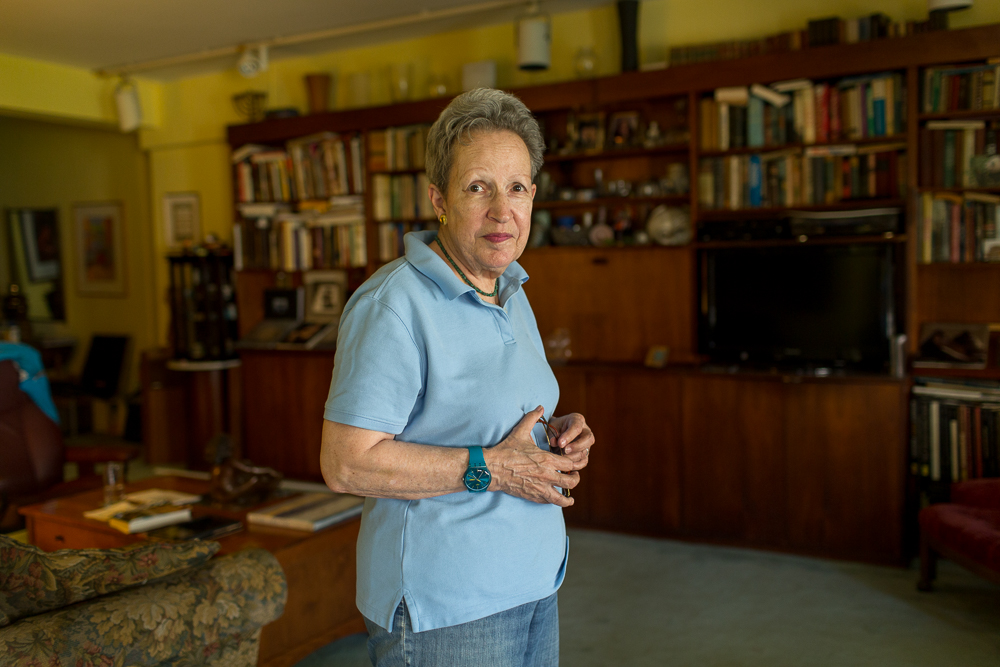 ©Susan Rosenberg Jones, Judy:”I feel his presence very strongly sometimes and I mean I’ve never tried to pin down what it is that triggers that. I know sometimes I get into bed at night and I know there’s something I can discuss with him and then it sort of hits me – ‘well no. you can’t’. Um, it’s very jarring. And his presence is very real. Sometimes, I’ll be in the bedroom or I’ll be here in the living room and I know he’s in the other room. I just know he’s in the other room.” 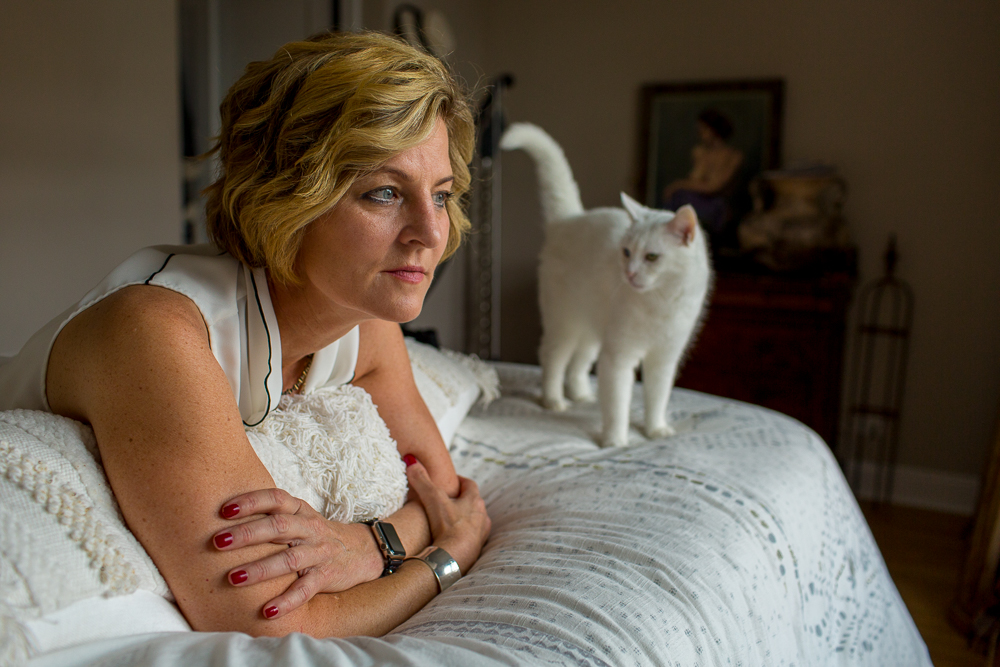 ©Susan Rosenberg Jones, Lori: “I was looking for comforting books and trying to reconcile God’s role in the whole thing. And how can bad things happen to good people. And why is there so much suffering in the world and all those age – old questions. And then afterwards I got really caught up in the girls and I started doing a lot of reading about that. I remember I have this book called Fatherless Daughters – I just really wanted to know how could I help them, and there was almost nothing on it.” 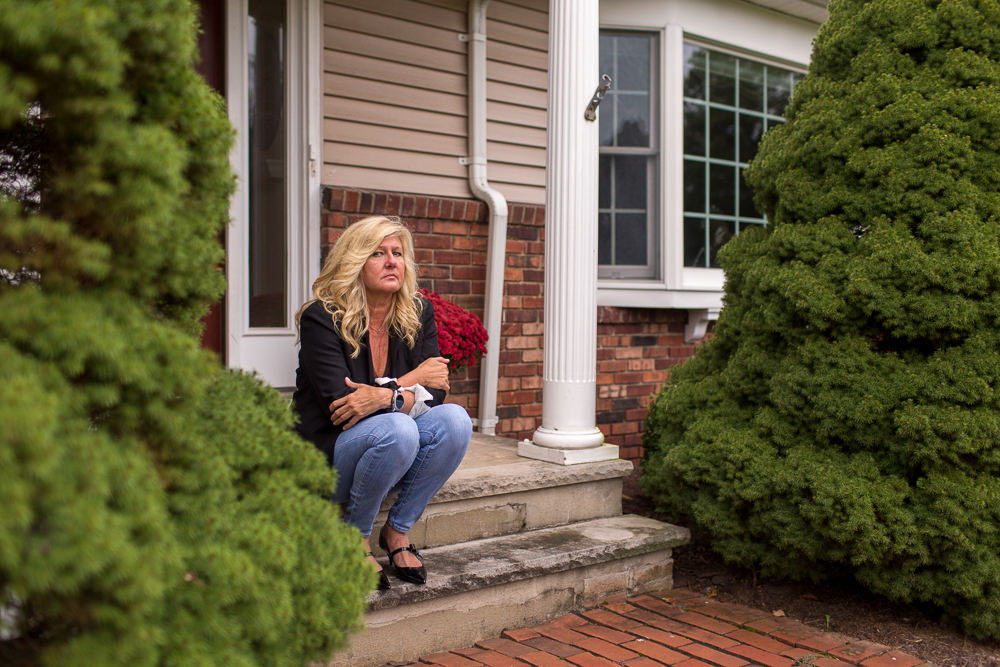 ©Susan Rosenberg Jones, Melissa:”I went back to work about two weeks after the funeral. It’s a very strange feeling to go back. People look at you. They don’t know what to say to you. I guess for some people it’s easier to ignore it and just ignore you than to confront you and say, ‘How are you doing’? I think living on my own was one of the hardest things that I’ve had to deal with. Just figuring out how do I feed myself because there were always two of us, you know, and when you go from two to one, sometimes I don’t eat – sometimes it’s like two or three days, and I’m like, ‘Did I eat’?” 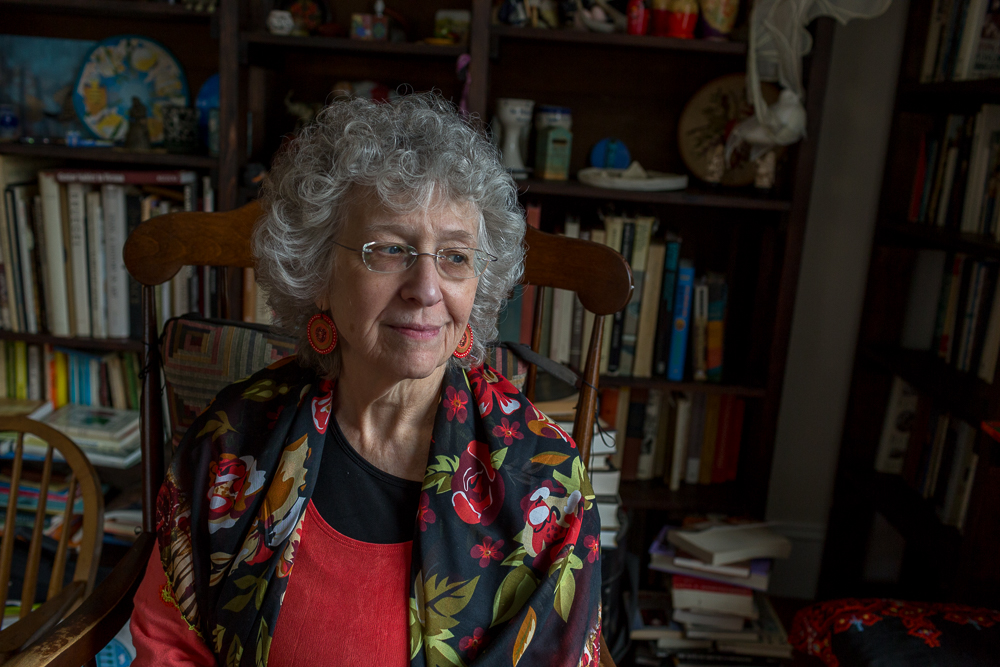 ©Susan Rosenberg Jones, Paula: “I have to be home because I keep saying I think he’s lost and I have to be here in case he comes back. I want him to find me here. I have no desire to travel. There are so many people who haven’t known love in their life and it’s those people I feel so sorry for. It’s why I can’t be greedy. I keep feeling I can’t be greedy because I had him for 25 years.” 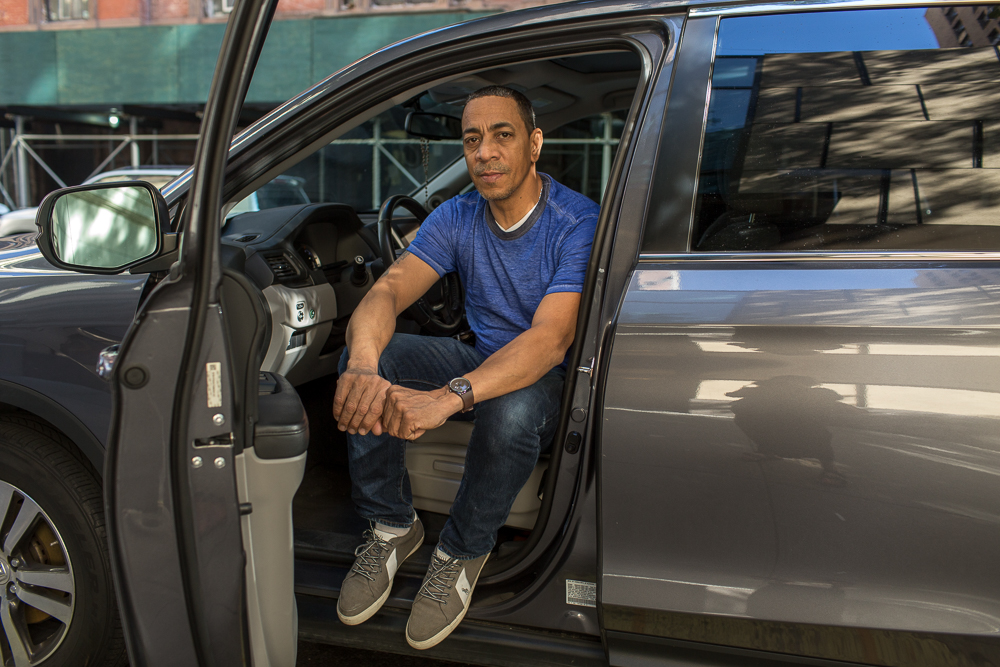 ©Susan Rosenberg Jones, Santiago: “It’s been two years. I think about her all the time. When I see my sons, my daughter – I see my wife in them. She was the best woman for me in the world – a beautiful person.” 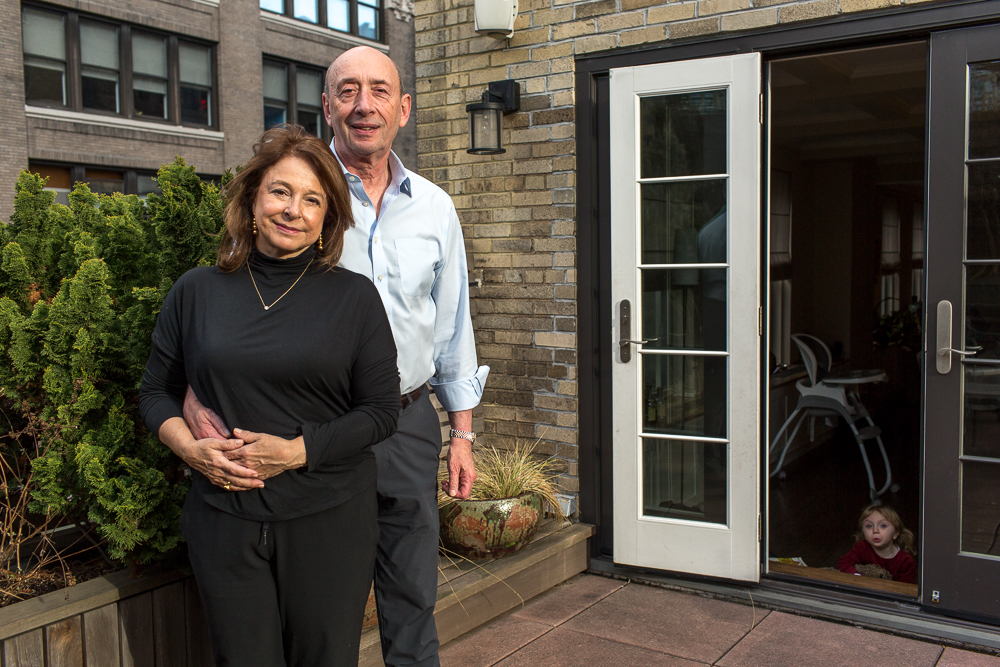 ©Susan Rosenberg Jones, Sari: “I don’t think there were fireworks when we first met, but it was very easy to be together and it kept getting better.” Sam: “We’d both been in a long-term monogamous relationship and I think we find that situation comfortable.” Sari: “I was a relationship person my whole life. My husband died right before my 50th birthday. I knew that by 60 I’d be married. I just knew. I’m a relationship person.” Sam: “I think we’re both lucky. We both acknowledge that side of our lives is important. You don’t minimize it. We share all sorts of things, quirks of our former spouses. Sari finally sees, in my daughter, a lot of what my wife was like.” 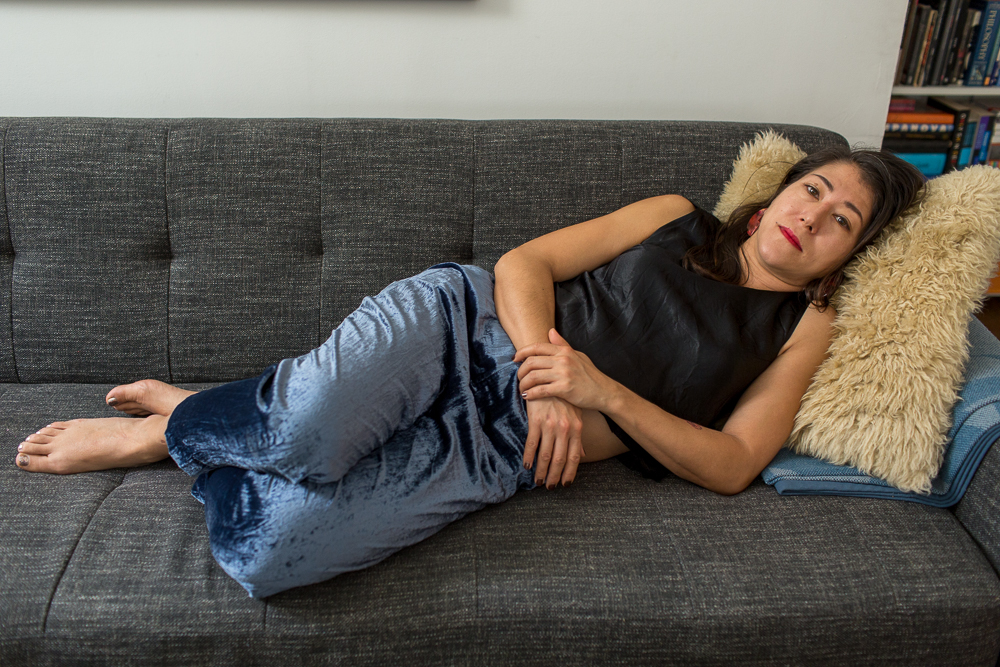 ©Susan Rosenberg Jones, Stephanie: “The way I kind of wrap my head around it all is, it’s not just that someone died – it’s like a weird way to end the relationship. It’s the weirdest way because all these conversations were never finished, and nothing is ever resolved.” 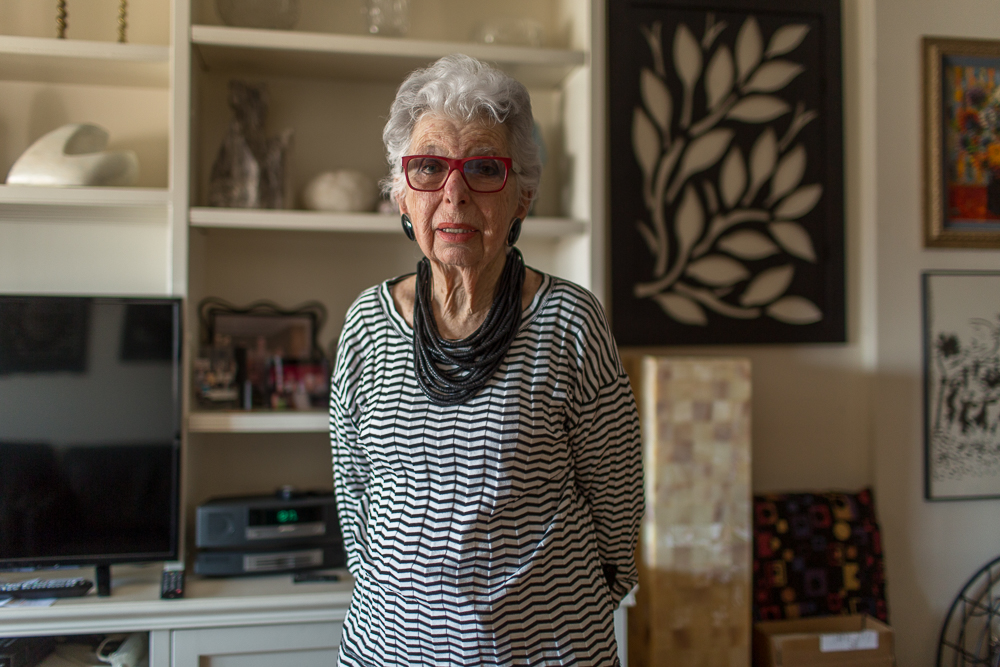 ©Susan Rosenberg Jones, Sue: “I went to a bereavement group at the “Y” and I said the problem that I had was that I had no women friends. We were all couples. And so one of the yentas said to me, ‘when you stop playing bridge with all the men you’ll have women friends’. So I started to play Mah- Jongg.