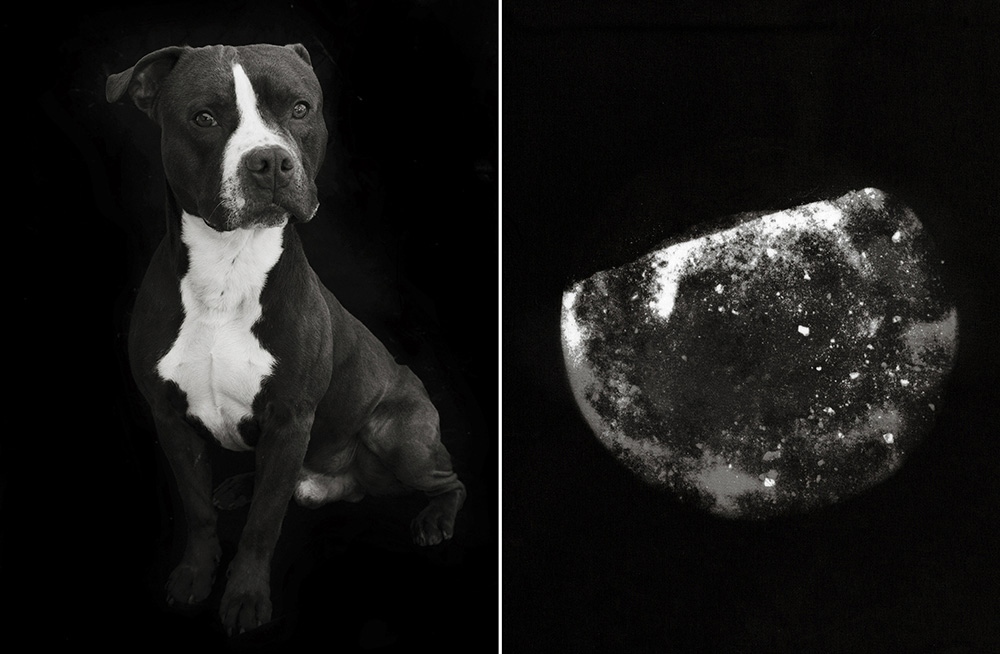 I am thankful to be part of a community that considers our earth and all who share it, shining a light on issues that are significant and important. A new exhibition, All Creatures Great and Small, curated by Lisa Pearce, the Director of Meredith College’s Frankie G. Weems Gallery, features five female artists who are dedicated to animals and activism. While they each take a different approach (fine art, journalism, video installation, and commercial work), the heart of their work explores the lives, traumas, triumphs, and most of all, the individuality and importance of a few of the many non-humans with whom we share the planet. Artists include: Lee Deigaard, Shannon Johnstone, Jo-Anne McArthur, Traer Scott, and L.A. Watson. The exhibition opens on October 14–November 10, 2019 at the Frankie G. Weems Gallery, Gaddy-Hamrick Art Building, Meredith College, 3800 S. Hillsborough, St, Raleigh, NC. 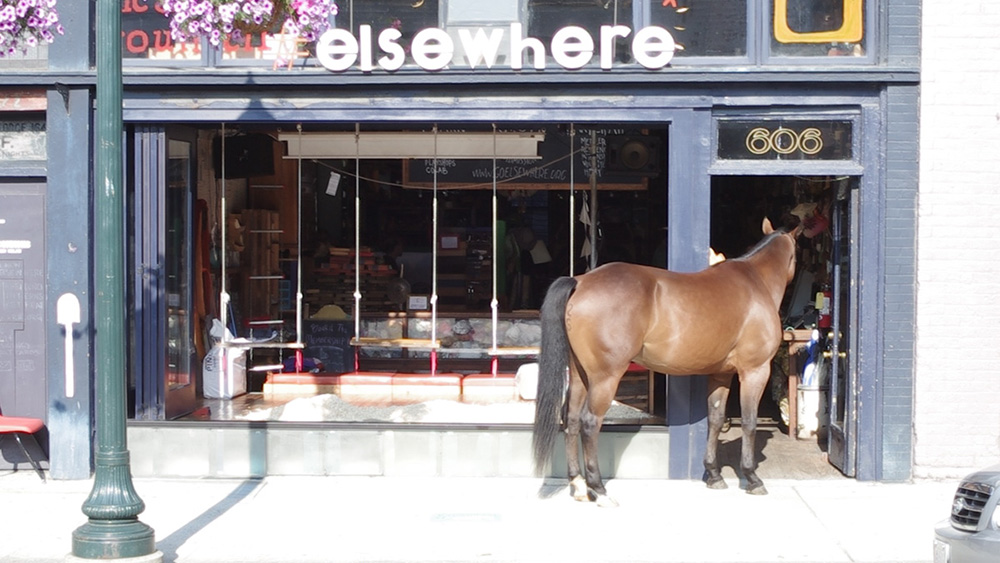 Lee Deigaard lives and works in New Orleans and rural Georgia. Her work explores animal protagonists and the emotional & physical landscapes where humans and animals co-habitate. She exhibits her work nationally and internationally and was a 2017–18 Artist in Residence at the Joan Mitchell Center in New Orleans. Her series of nocturnal photographs of animals won the Clarence John Laughlin Award and was featured in solo shows at The Ogden Museum (2014) and Arthur Roger Gallery (2016). She graduated with honors from Yale University and holds graduate degrees from UT Austin & the University of Michigan (School of Art & Design). 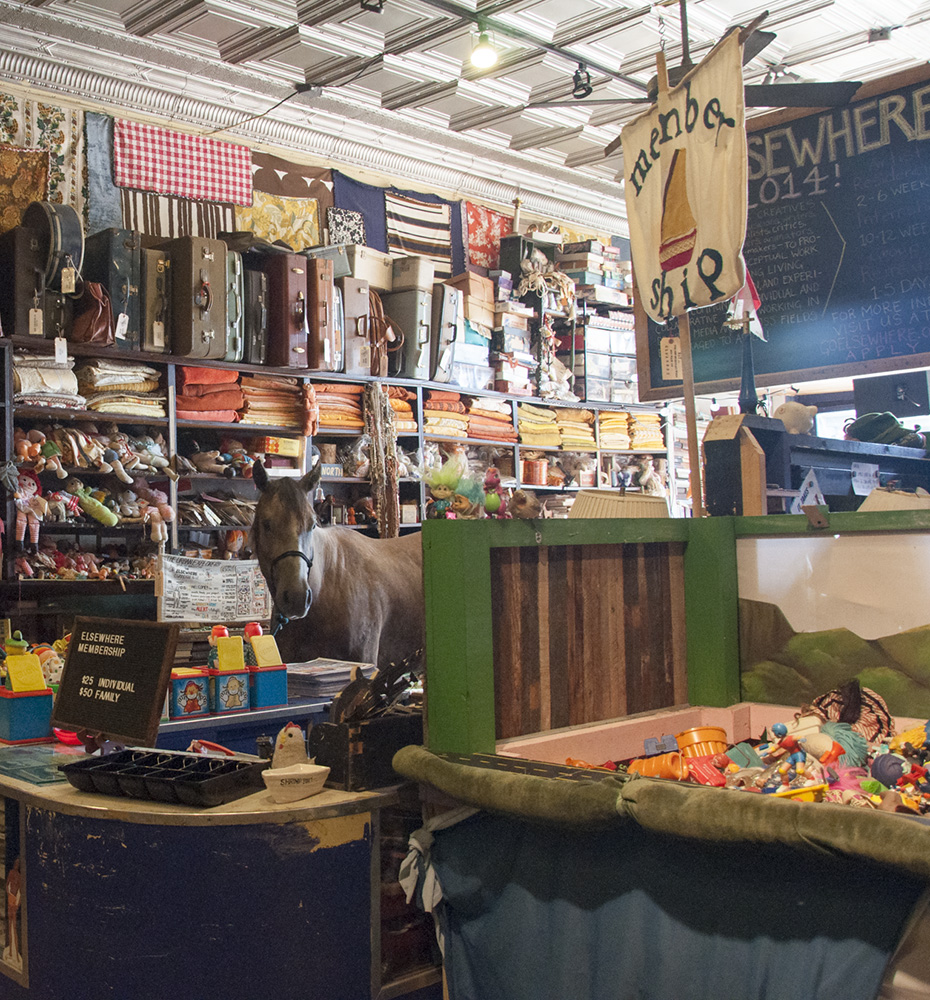 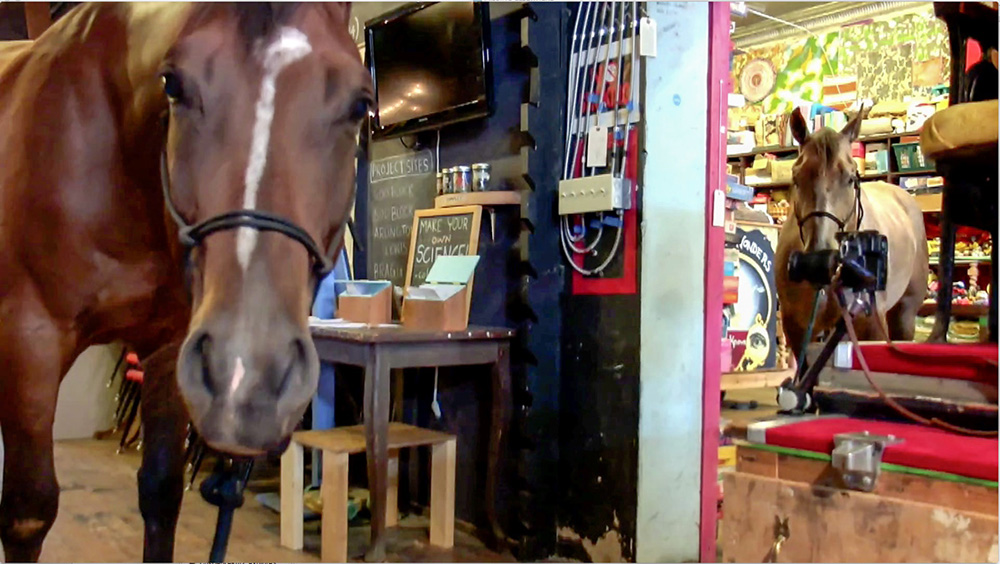 Shannon Johnstone, selections from Landfill Dogs, photographic prints, and Stardust and Ashes, cyanotypes
Landfill Dogs: These are not cute pictures of dogs. These are dogs who have been homeless for at least two weeks, and now face euthanasia if they do not find a home. Each week I bring one dog from the county animal shelter and photograph him/her at the local landfill.

The landfill site is used for two reasons. First, this is where the dogs will end up if they do not find a home. Their bodies will be buried deep in the landfill among our trash. These photographs offer the last opportunity for the dogs to find homes. The second reason for the landfill location is because the county animal shelter falls under the same management as the landfill. This government structure reflects a societal value; homeless cats and dogs are just another waste stream. However, this landscape offers a metaphor of hope. It is a place of trash that has been transformed into a place of beauty. I hope the viewer also sees the beauty in these homeless, unloved creatures.

Stardust and Ashes: I made these cyanotypes with the ashes of euthanized animals from an animal shelter’s crematorium in rural North Carolina. These creatures died with nobody to mourn their passing, except maybe a few overwhelmed shelter workers. Sadly, euthanasia in animal shelters is far greater in the southeast than anywhere else in the United States.

Using my own breath and fingers to manipulate the ashes, I work the ashes into celestial configurations while the sun exposes the cyanotype turning the negative space Prussian blue. With these images I hope to mourn the passing of thousands of our forgotten companions, and remind us that we are all connected and headed for the same fate: reduced to dust and returned to the stars. 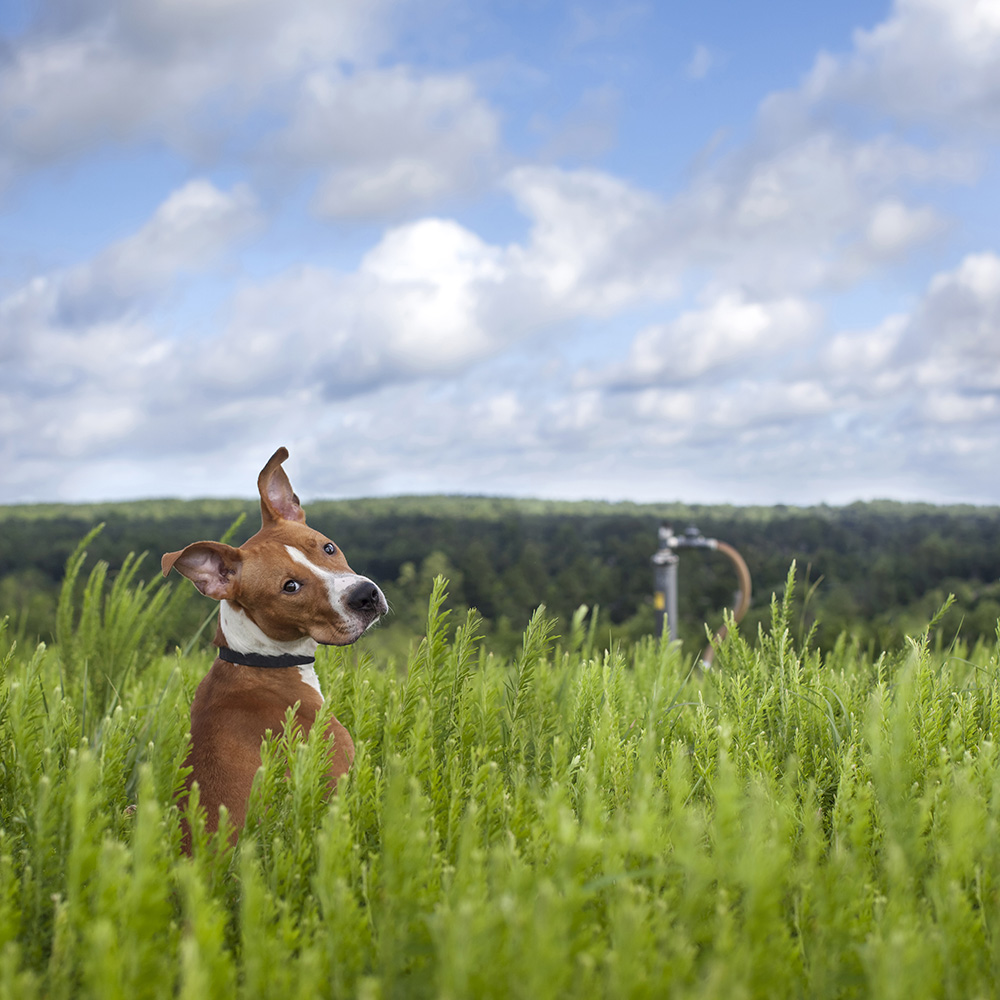 Shannon Johnstone’s photographic work deals with themes that reclaim what has been discarded and make visible that which is hidden. Her project, “Landfill Dogs”, has been featured nationally and internationally, and was most notably on ABC World News with Diane Sawyer (2013), and CNN.com (2014). Her recent project, “Stardust and Ashes”, was a Critical Mass Finalist (2017), and exhibited at “The Front” in New Orleans, LA (2017). Most recently, both projects were featured at Colorado Springs Fine Art Center ( Year of the Dog , 2018). Johnstone is a tenured professor at Meredith College in Raleigh, NC. 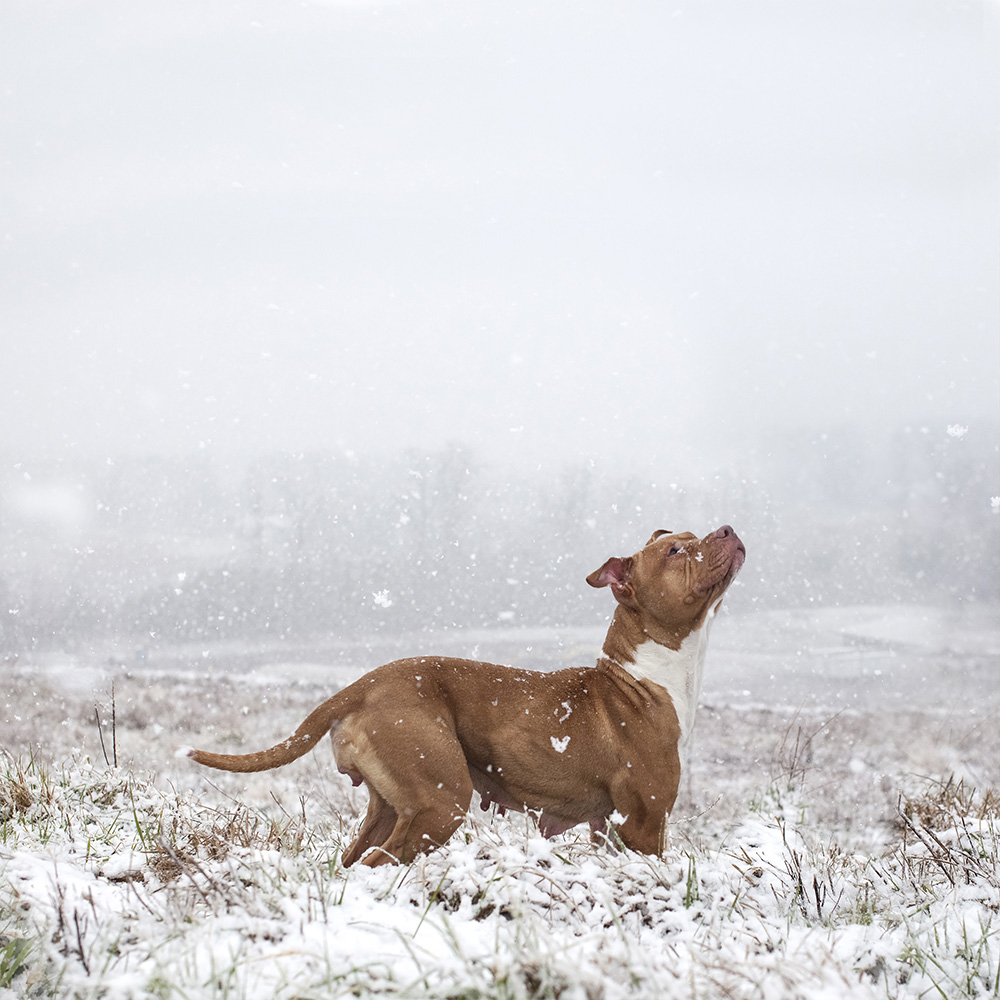 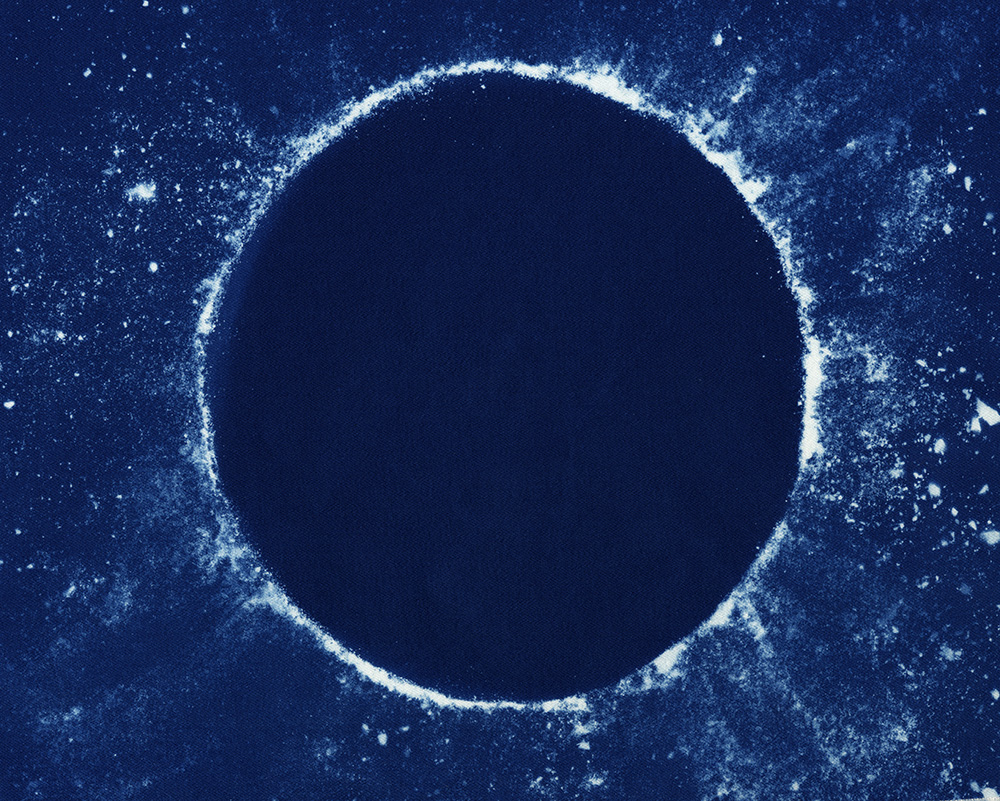 ©Sharon Johnstone, Stardust and Ashes #121 , Cyanotype on fabric, 8” x 10”, 2018. Cyanotype made with sunlight and ashes of euthanized animals from an animal shelter in rural North Carolina.

Jo-Anne McArthur, selections from We Animals archives, photographic prints
It was over twenty years ago when I realized just how invisible, masked, and remade non-human animals are to us. I couldn’t unsee or unthink the animal behind a product: a pig instead of ribs, fur trim instead of a fox. Thus began my lifelong work, documenting animals in the Anthropocene. This work has taken me to almost sixty countries, not only for the documentary photography involved but for speaking engagements on the subject matter. The project began as We Animals , but it has evolved into We Animals Media , a small but mighty agency dedicated to telling even more stories of animals. All of the work I do is with the intention of showing an ever-growing audience our complex and often brutal relationship with others, so that we can see, contemplate, care, and change. 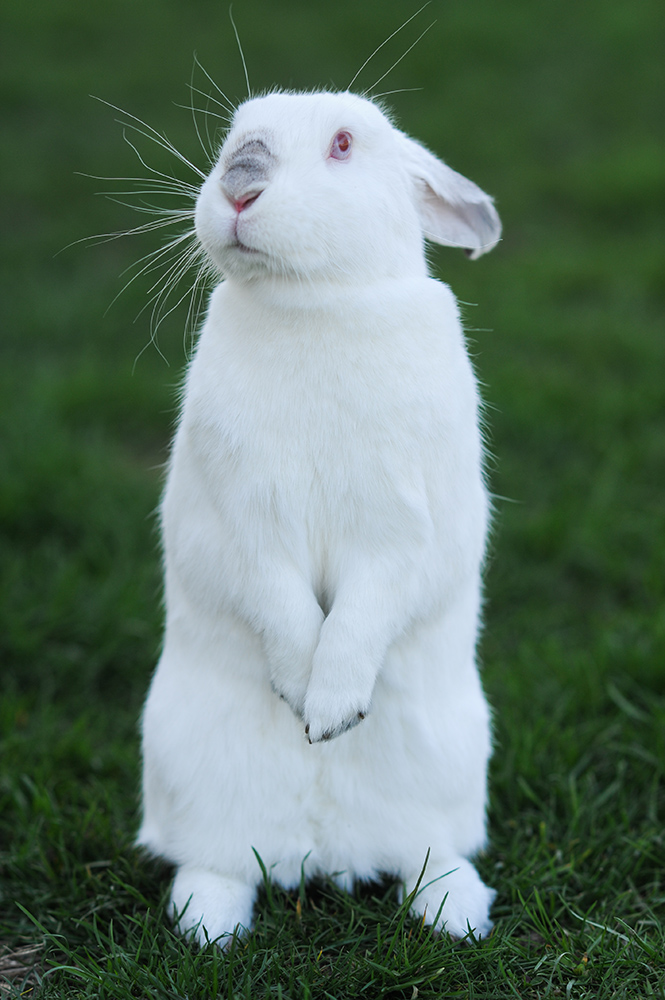 Jo-Anne McArthur is an award-winning photographer, author, and sought-after speaker. Through her long-term body of work, We Animals, she documents our complex relationship with animals around the globe. Since 1998, her work has taken her to almost sixty countries. In 2019, she founded We Animals Media , an international agency dedicated to telling the stories of animals. McArthur’s photography and writing has been published with media such as National Geographic,The Washington Post, The Guardian, LensCulture, and Canadian Geographic. In addition, We Animals images have been used by more than 100 organizations, publishers and academics to advocate for animals. 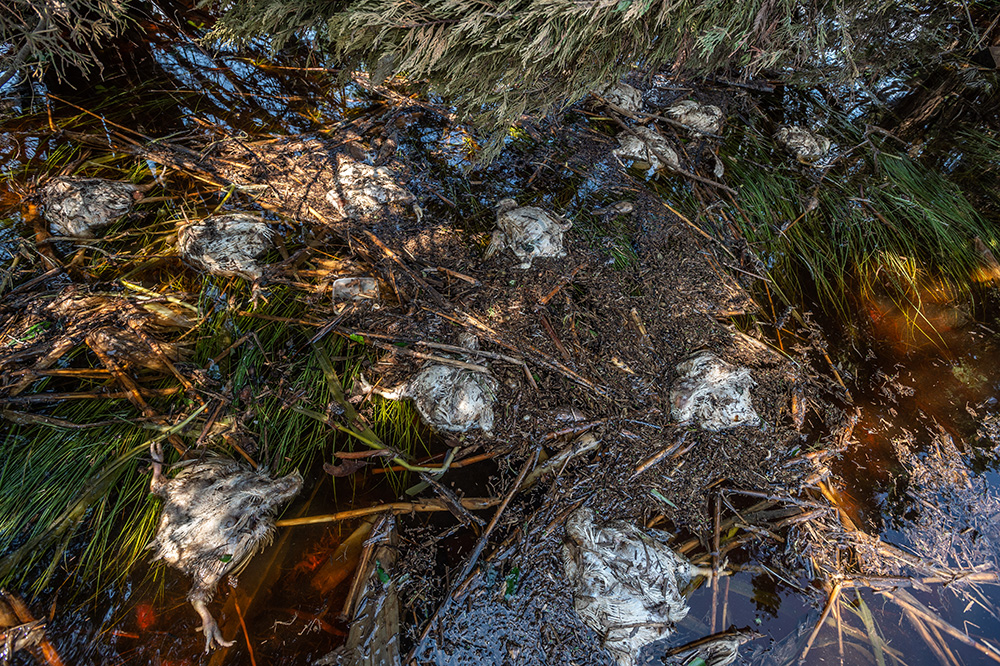 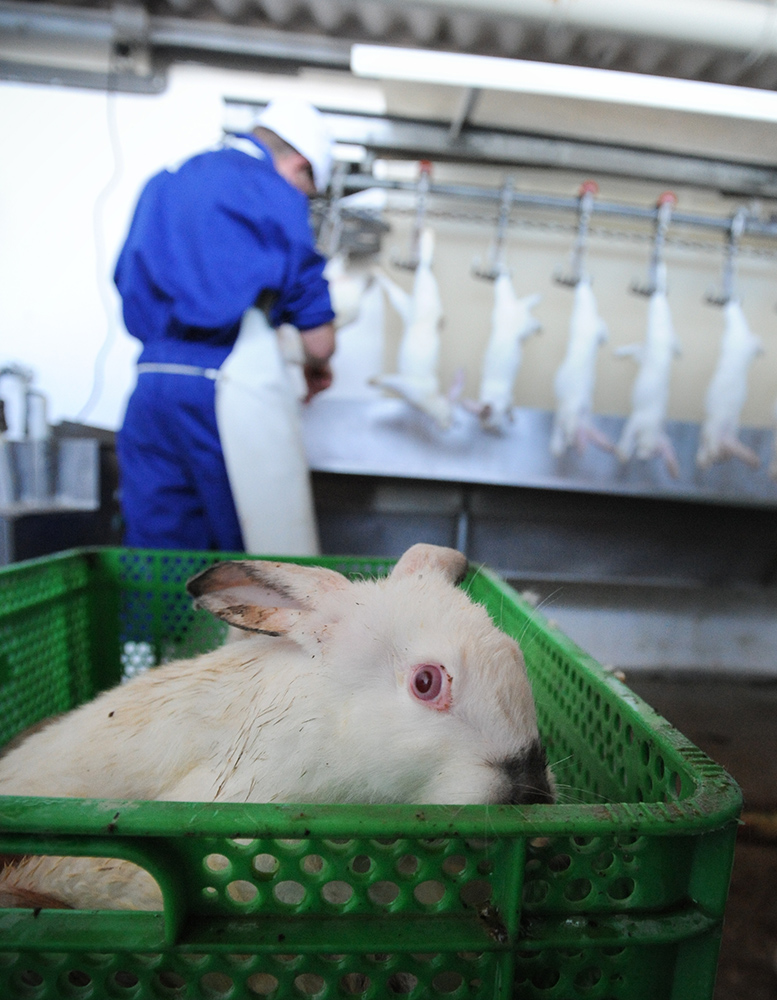 ©Jo-Anne McArthur,
Jo-Anne McArthur (Animal Equality), The Last Rabbit in the Crate , Archival Inkjet Print, 16” x 20”, 2010. The last rabbit looks out from a plastic crate as a worker slits throats of hanging rabbits behind.

Traer Scott, selections from Nocturne, Radiant , and Raptors, photographic prints
My work over the past two decades as a photographic artist spans several genres and styles but whether abstract or portraiture, documentary or commercial, every series is driven by a need to question and redefine the destructive conventional wisdom of dominion. In my personal work I am inspired by bestial metamorphosis (The Hungry Ghost) as well as the often-blurred distinction between the hunter and the hunted (Natural History). My books focus on modern animal welfare issues: animal overpopulation (Finding Home, Shelter Dogs and Street Dogs), conservation (Nocturne and Raptors), the designation of sentience (Radiant) and recognizing humanity in non-human subjects. 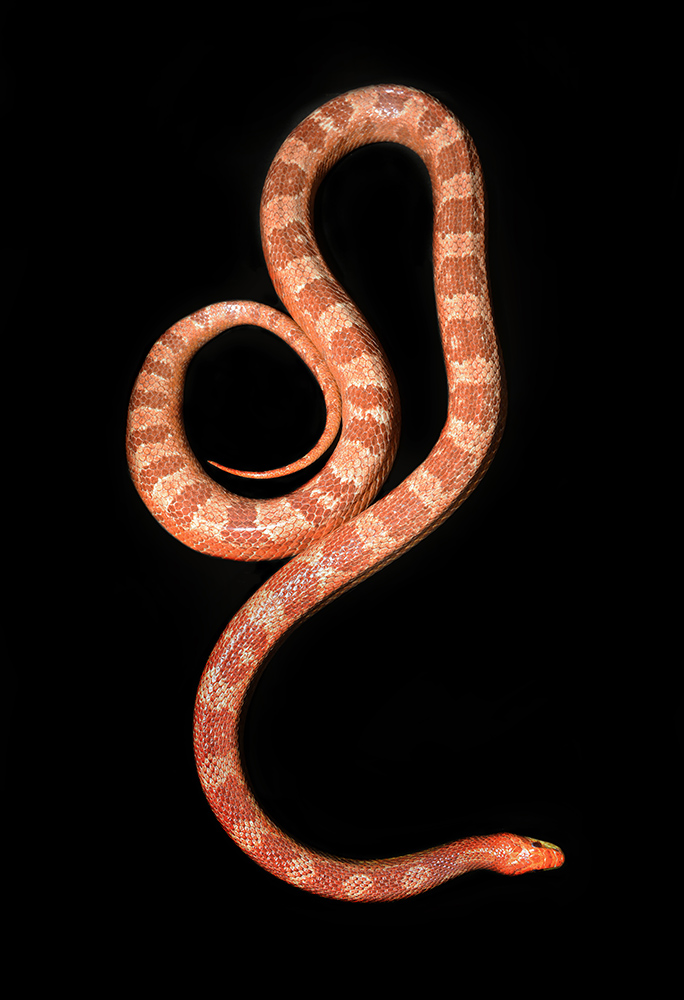 ©Traer Scott, Corn Snake, Archival Inkjet Print, 20” x 16”, 2014 “One of the origins of the corn snake’s name is said to be the pattern of scales on its belly, which resembles Indian corn. These harmless snakes, indigenous to the eastern United States, are often mistaken for the lethal copperhead but are, in fact, not venomous and pose no threat to humans. The docile corn snake is actually quite beneficial to people, as it helps to control the wild rodent populations that often destroy crops.” Taken from, Nocturne: Creatures of the Night , by Traer Scott, Princeton Architectural Press, New York, NY, 2014, p. 86

Traer Scott is an award-winning photographer and best-selling author of ten books. Specializing in animal photography,the human/animal bond and conservation-themed fine art photography, Scott’s work has been exhibited around the world and has appeared in National Geographic, Time, Life Magazine, The New York Times LensBlog and dozens of other national and international publications. Traer was the recipient of the 2010 Rhode Island State Council for the Arts Photography Fellowship Grant and the 2008 Helen Woodward Humane Award for animal welfare activism. She lives in Providence, Rhode Island with her husband, daughter, and a myriad of creatures. 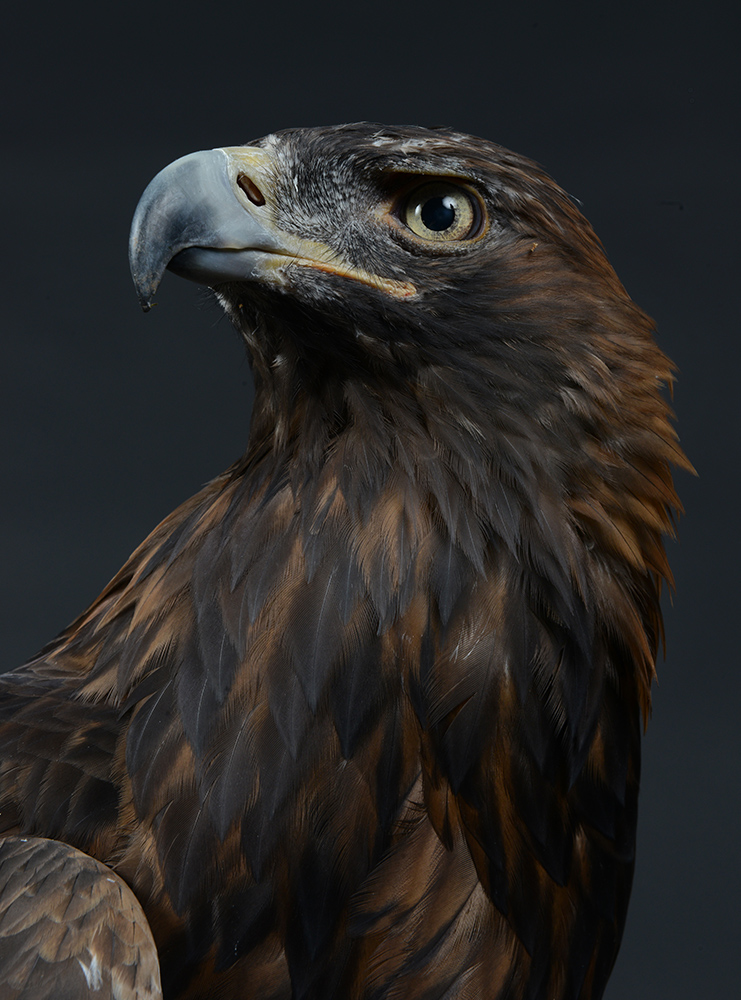 ©Traer Scott, Golden Eagle,, Archival Inkjet Print, 20” x 16”, 2017 “With a wingspan of more than seven feet, the golden eagle has been clocked in aerial dives at two hunred miles per hour. The golden eagle also performs a territorial display and courtship ritual called skydancing , where the bird executes a very rapid series of pendulum-like steep dives and upward swoops. Golden eagle couples often engage in aerial play, where one flies up with a stick or other object and then drops it for the other to catch.” Taken from, Raptors: Portraits of Birds of Prey , by Traer Scott, Princeton Architectural Press, Hudson, NY, 2017, p. 16 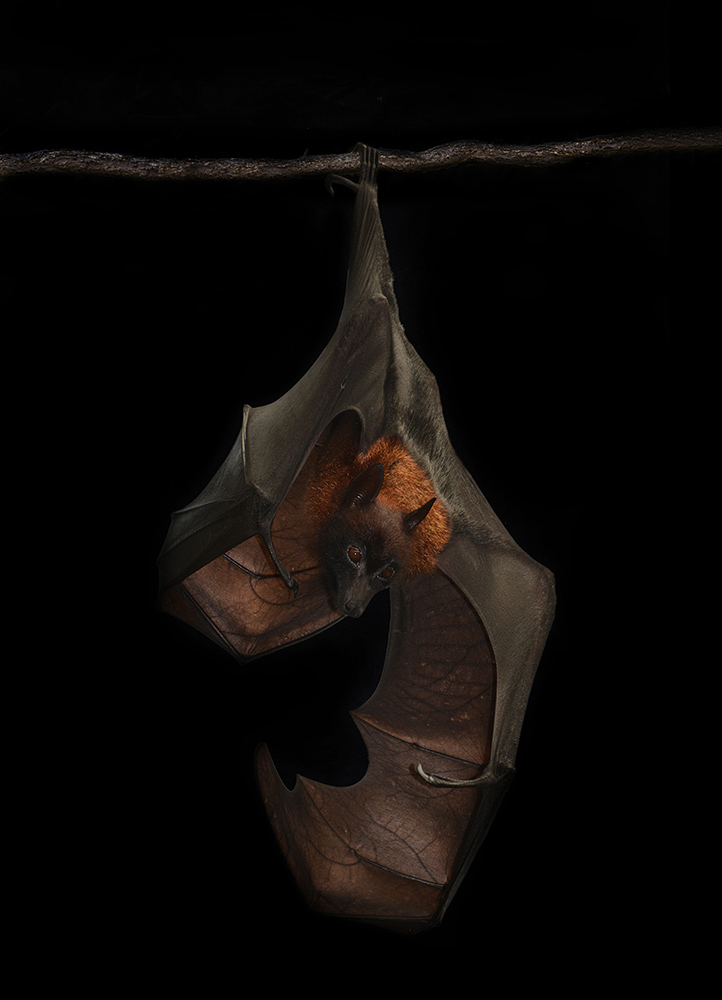 ©Traer Scott, Indian Flying Fox, Archival Inkjet Print, 20” x 16”, 2014 “The Indian flying fox, one of more than 1,100 species of bats, is also known as the giant fruit bat. Found mainly in the tropical forests on the Indian subcontinent, this spectacular mammal usually resides in a treetop colony with hundreds or sometimes thousands of other bats.” Taken from, Nocturne: Creatures of the Night , by Traer Scott, Princeton Architectural Press, New York, NY, 2014, p. 18

Shannon Johnstone and Traer Scott, Photographs in Conversation, photographic prints
Traer Scott and Shannon Johnstone share a love of the under dog. Both artists champion homeless animals, and hope to tell their stories with dignity and grace. In this photographic conversation, the artists combined a portrait of a dog who never a home from Scott’s “Shelter Dog” series, and paired it with an image from Johnstone’s “Stardust and Ashes”. By combining these portraits, the artists hope to provide a picture of who these dogs once were, where they are now, and mourn the passing of their existence.

This collaboration originally appeared in LENSCRATCH as part of the 2017 “Photographs in Conversation” online
exhibition. 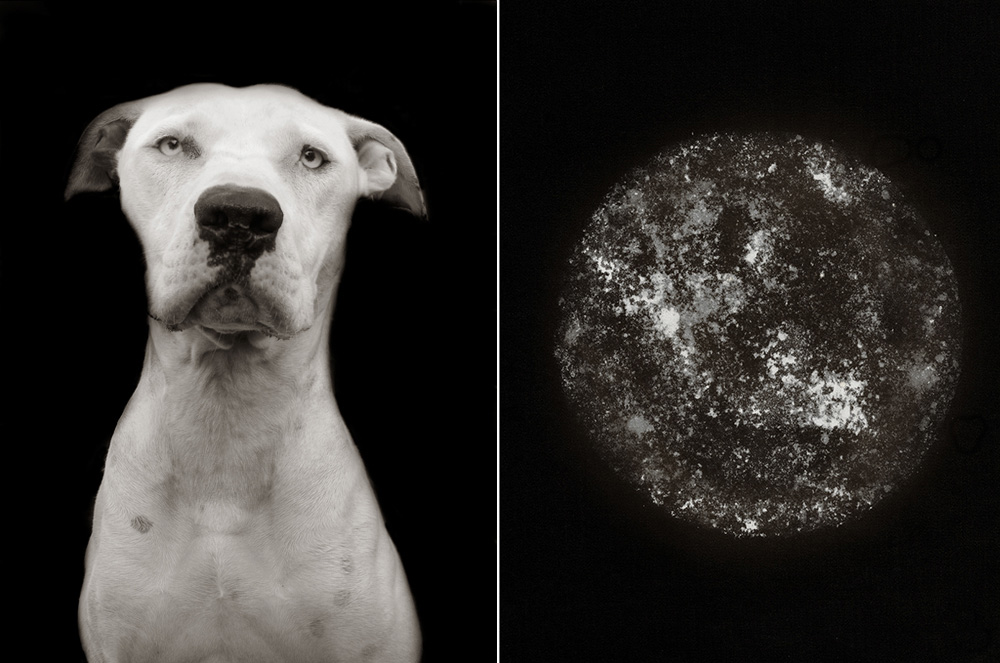 L.A. Watson, UnCooped , video installation
95% of egg-laying hens live in a space smaller than a standard size sheet of paper, while approximately 50 million hens live in a space half this size. In the Uncooped installation, 8.5” x 11” sheets of paper are stacked 11” tall, and the moving image of a hen is projected onto the paper stack so that her movements are contained within the boundaries of this space. Viewers are encouraged to take home a sheet of paper from the stack, which feature various designs that call attention to the size of the paper and the space allotted to egg-laying hens. Viewers are also encouraged to learn more about the lives of egg-laying hens by visiting: www.uncooped.org . As the sheets of paper are consumed by the public, the projected space the hen resides in slowly erodes—will she ever be Uncooped? 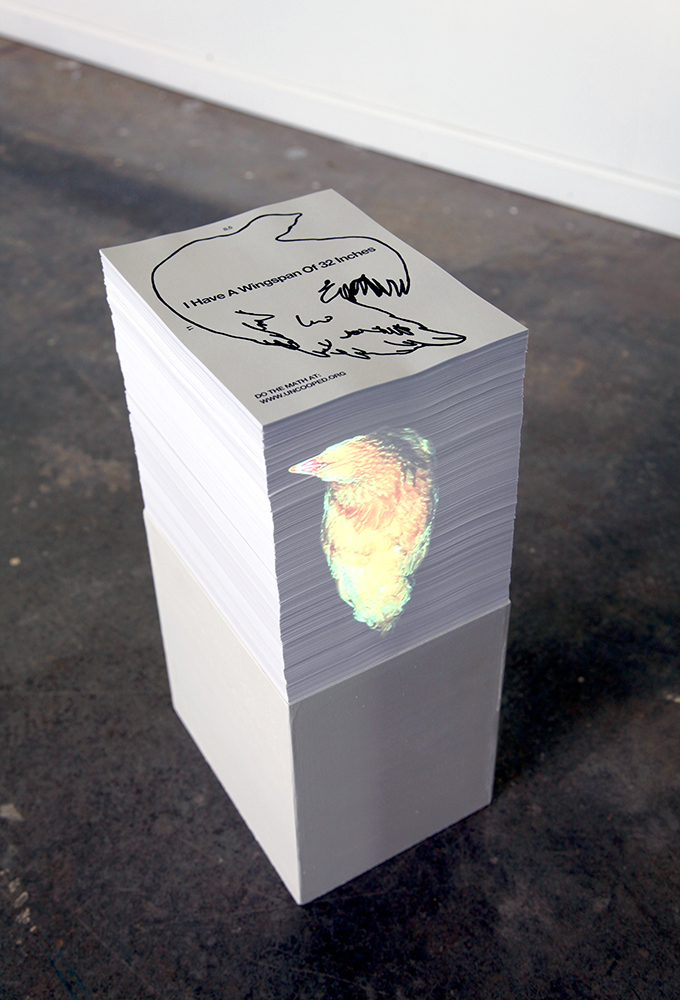 ©L.A. Watson, Uncooped, video installation, 2014 A video installation of a chicken projected on a stack of papers calls our attention to what millions of egg laying chickens endure each day. In this work, viewers are encouraged to take home a sheet of paper from the stack, which feature various designs that call attention to the size of the paper and the space allotted to egg-laying hens.

L.A. Watson is an interdisciplinary artist and activist who works in the field of critical animal studies. Her work has been exhibited both nationally and internationally, including the Mary H. Dana Women Artist Series at Rutgers University and is in the permanent collection of The Animal Museum in Los Angeles, CA. Watson is a founding member of the artist coalition ArtAnimalAffect; a co-curator for the Uncooped exhibition and The Sexual Politics of Meat exhibition at The Animal Museum; and co-editor of the book, The Art of the Animal (Lantern Books, 2015). 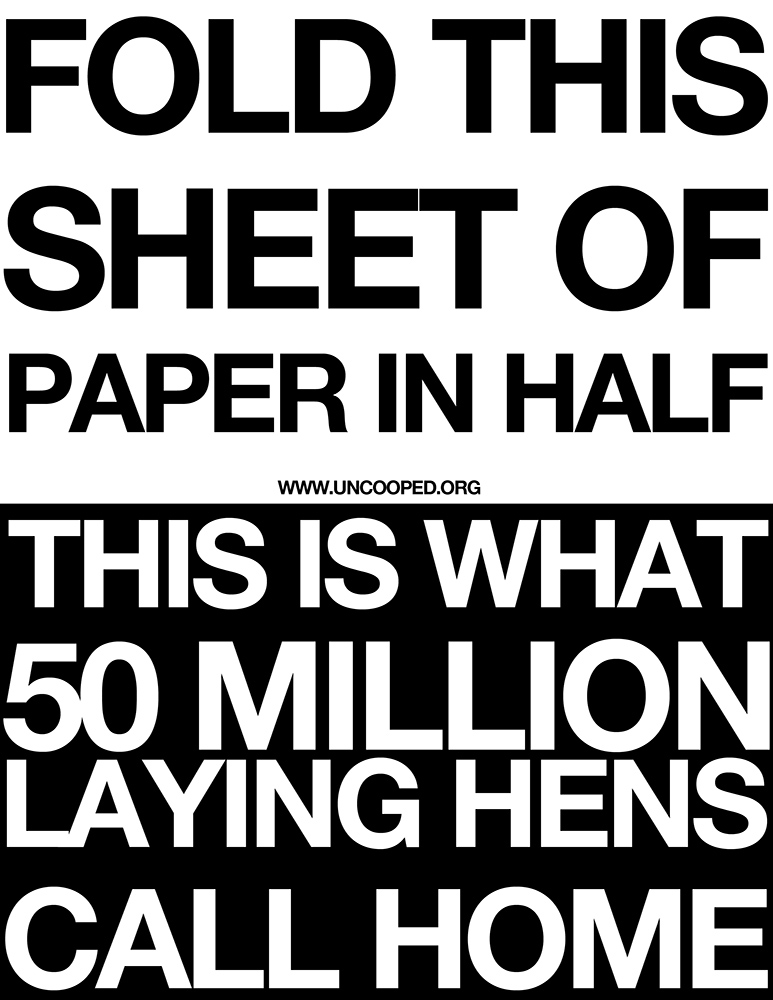 ©L.A. Watson, Detail of paper stack from Uncooped, video installation, 2014 “Fold This Sheet Of Paper In Half. This is What 50 Million Laying Hens Call Home” is one of the five different designs in the stack of papers that the video is projected on to. 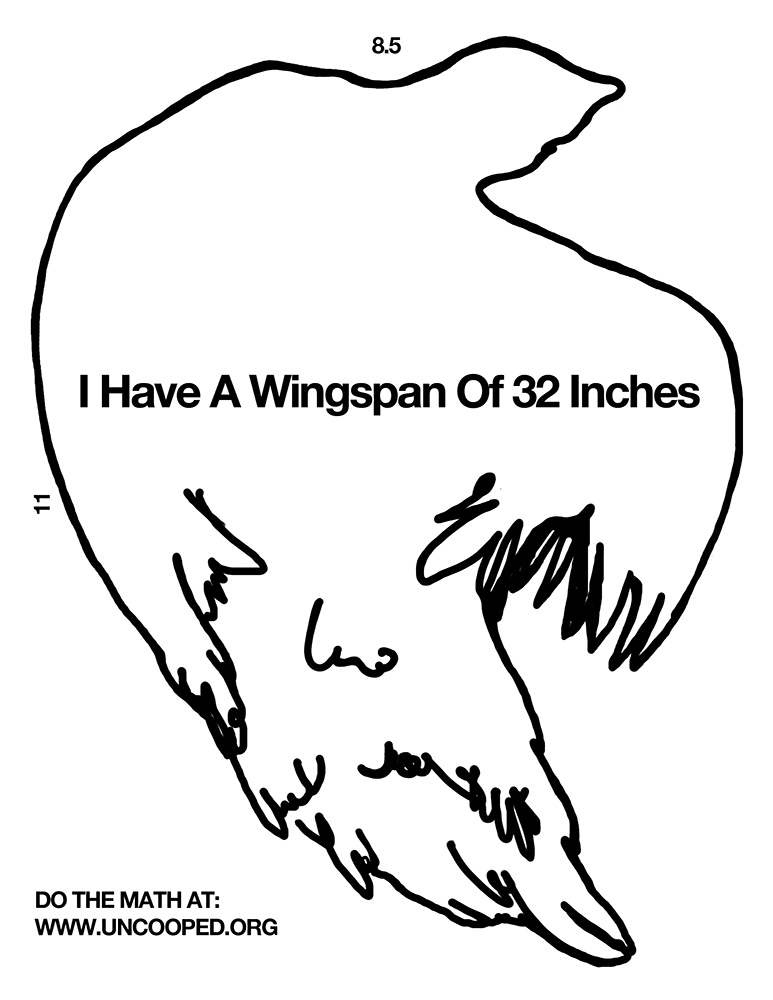 ©L.A.Watson, Detail of paper stack from Uncooped, video installation, 2014 “I Have A Wingspan of 32 Inches” is one of the five different designs in the stack of papers that the video is projected on to.

Thanks to Culture and Animals Foundation grant for supporting this exhibition.

NEXT | Sarah Hadley: Lost Venice >
< Now What? Thoughts on the future of photography | PREV