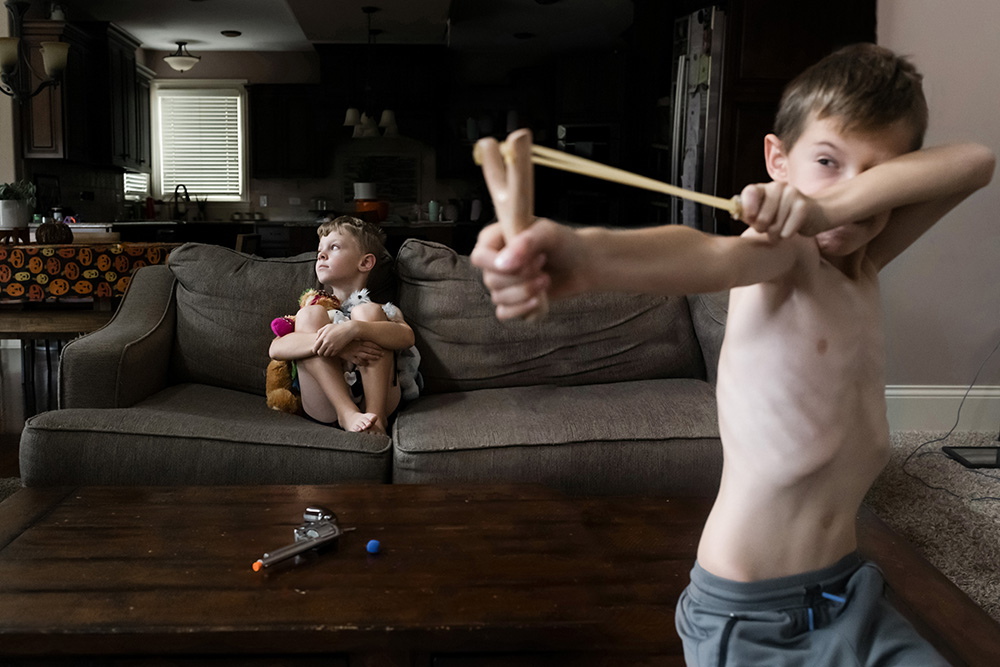 When I was raising my children, one of which was a spirited and rambunctious boy, my photographs didn’t exactly reveal the truth of daily life. They captured birthdays and holidays, vacations and times that the house was clean. They didn’t document my son’s bedroom after a enormous plastic bin of Legos was hurled during a tantrum, or the house in chaos during a screaming battle with a fireplace poker, or the exhaustion that comes from relentless parenting. Truly, I  am disappointed that my photo albums don’t hold the same images that my memories do. Fortunately for photographer Karen Osdieck, she is documenting her life as a participant observer, capturing the palatable world of skinned knees and cap guns, of backyard battles and the struggles for identity and filling her scrap books with truthful tellings. Layered onto those observations is her acknowledgement that she is raising male children in a unique and complex time and understands the importance of strength, vulnerability, and emotional intelligence. Her series, Modern Boyhood, is a beautiful investigation of that stew we call childhood. Her work will be featured in the upcoming Context 2020 Exhibition, juror Eve Schillo, through Filter Photo, the South x Southeast Gallery, Molena, GA, Black and white exhibition; juror Elizabeth Avedon, and the PhotoPlace Gallery, Honorable Mention, Middlebury, VT, Poetry of the ordinary exhibition; juror Sarah Sudhoff 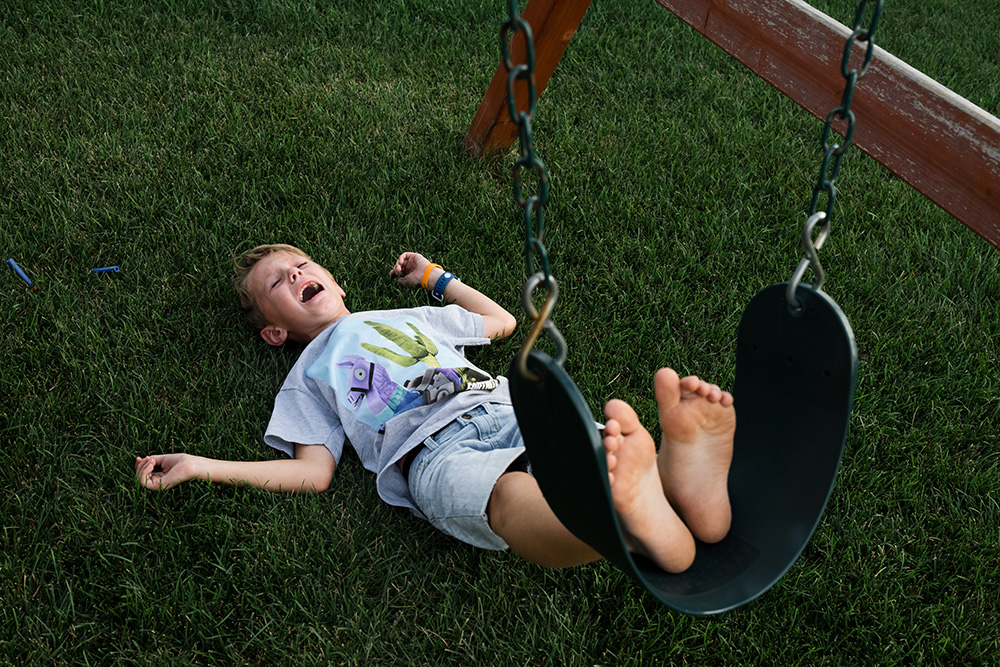 Modern Boyhood is narrative about free spirited young boys growing up during a time of cultural transition. As ideologies of masculinity are changing in the 21 st century, I recognize the importance of my role as both mother and teacher in my children’s journey to becoming young men. It’s a confusing time to be a young boy and the mixed messages they receive are prevalent as we work as a society to combat the toxic masculinity of the past.Gender definitions are moving away from stereotypical characteristics resulting in a struggle for child and parent to chart a course different from the tropes of a gendered childhood.

Through this ongoing work, I share an intimate view of the complexities of navigating the self in a world that is largely unfamiliar. The photographs included in this series delve into my boys’ current states of mind and illustrate unscripted behaviors. Each image is meant to be a sub story of the greater narrative of contemporary boyhood. I’m attempting an unbiased approach to examine their lives and work to present them as relatable and very true – presenting a kind of portal to their future selves but also an exploration of who they are now. 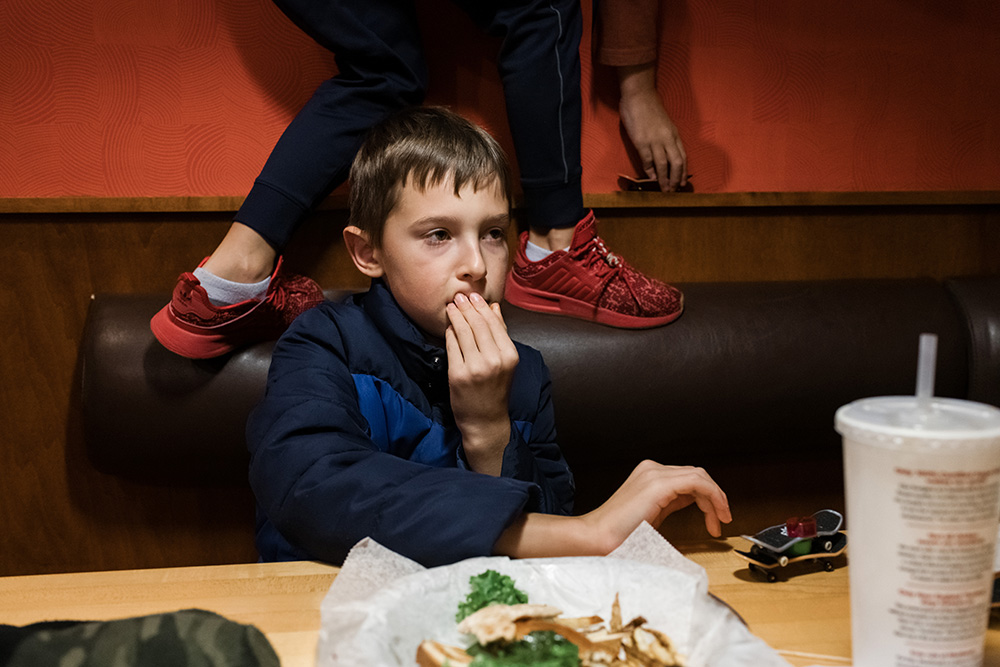 ©Karen Osdieck, Crawling Back to Dinner

Karen Osdieck (b. 1982) is an accountant by trade and a visual artist by passion from a small suburb outside of Chicago, Illinois. At a young age, Karen was introduced to the medium of photography by her father and she learned very early the importance of documenting family. While pursuing her undergraduate and masters degree in accountancy, Karen took photography classes at her university to fill a creative void that an intense volume of math and business classes created. She borrowed her dad’s “fancy” 1980 Olympus and learned how to shoot in manual, develop film, and print images in the darkroom. Since this time she has been continuously been learning the medium, through classes, workshops, books and mentoring.

Three years after becoming a mother, Karen unexpectedly lost her dad to cancer. Photographing her daily life helped her come to terms with her grief and to keep her dad’s legacy alive for her children’s sake. While using using her lens to investigate her children’s tendencies, adopting a role of observer rather than mother, her photographic practice began to intensify. Karen aimed to transfigure the everyday into something noteworthy.

As an artist, Karen uses photography to come to terms with the chaotic-ness of motherhood and simultaneously to normalize the unglamorous side of suburban childhood. Inherited from her dad, Karen takes the approach that all facets of life are equally worthy of documenting and not just “the perfect ones”.

Now that her boys have entered a new stage of life and individuality her focus is the narrative of her children growing up in the thick of suburbia navigating the complexities of early adolescence. Karen’s work is influenced by the proverbial saying, “truth is stranger than fiction,” which leads her to document unapologetically. Karen believes in encouraging her boys to play, explore, be kind and true to themselves.

Karen has been published in several publications and has been exhibited in galleries and shows in the United States. 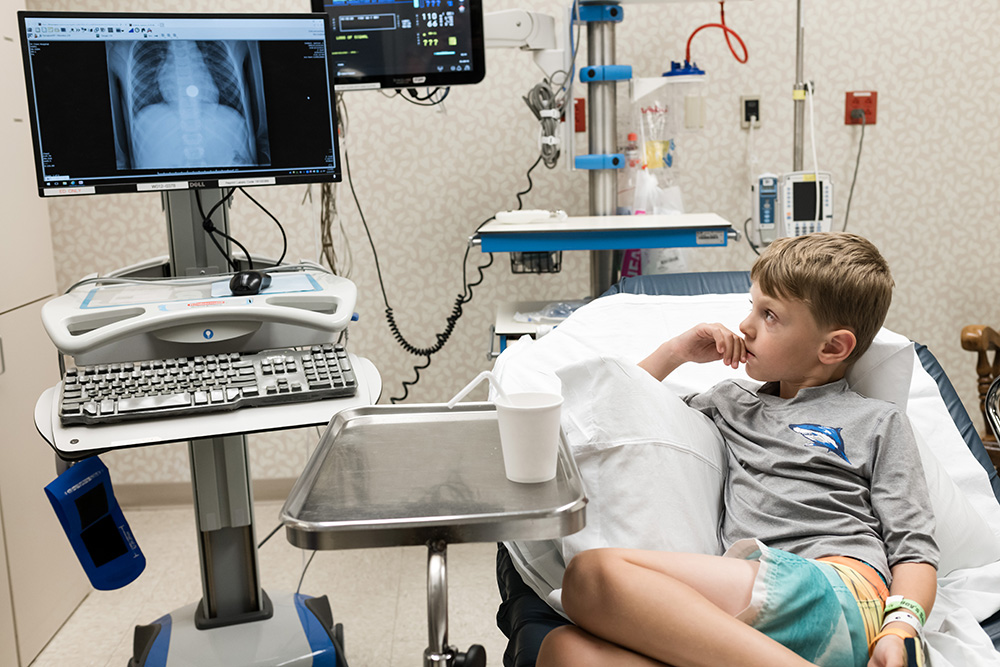 © Karen Osdieck, X-ray of the pennies he swallowed 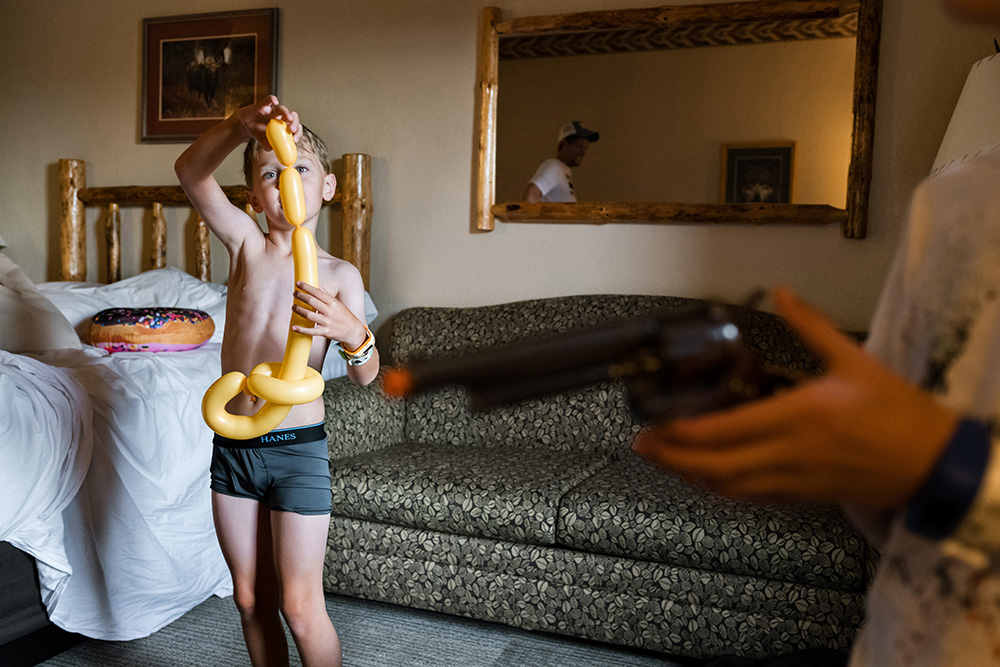 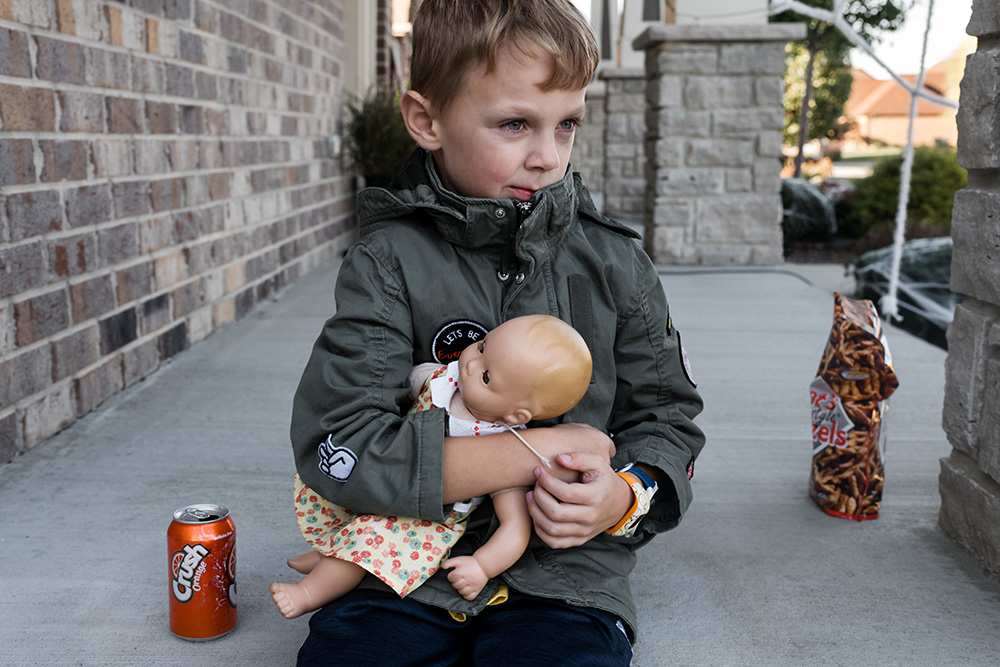 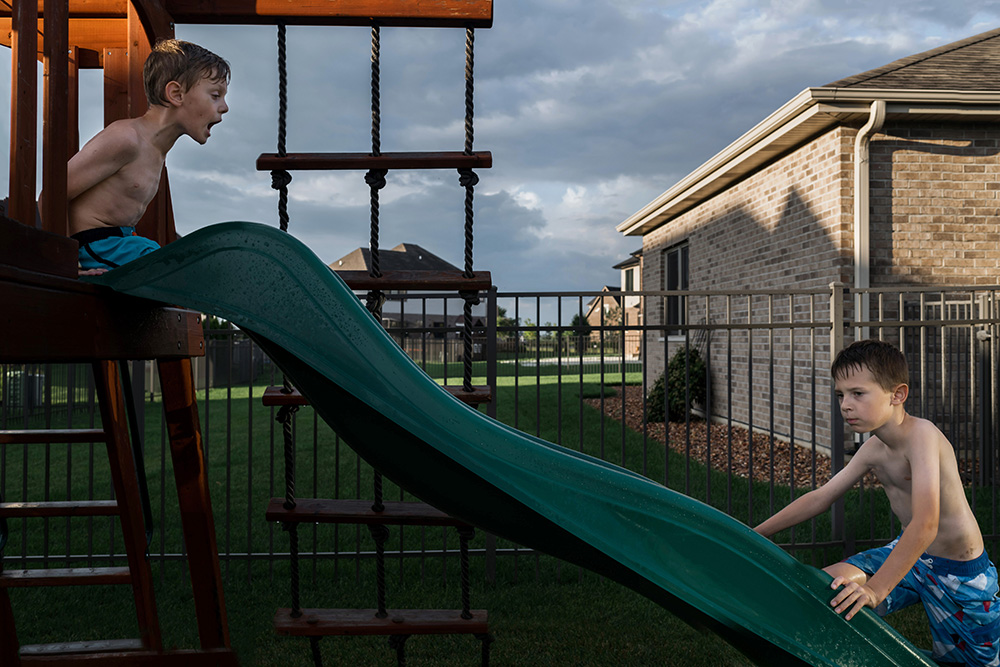 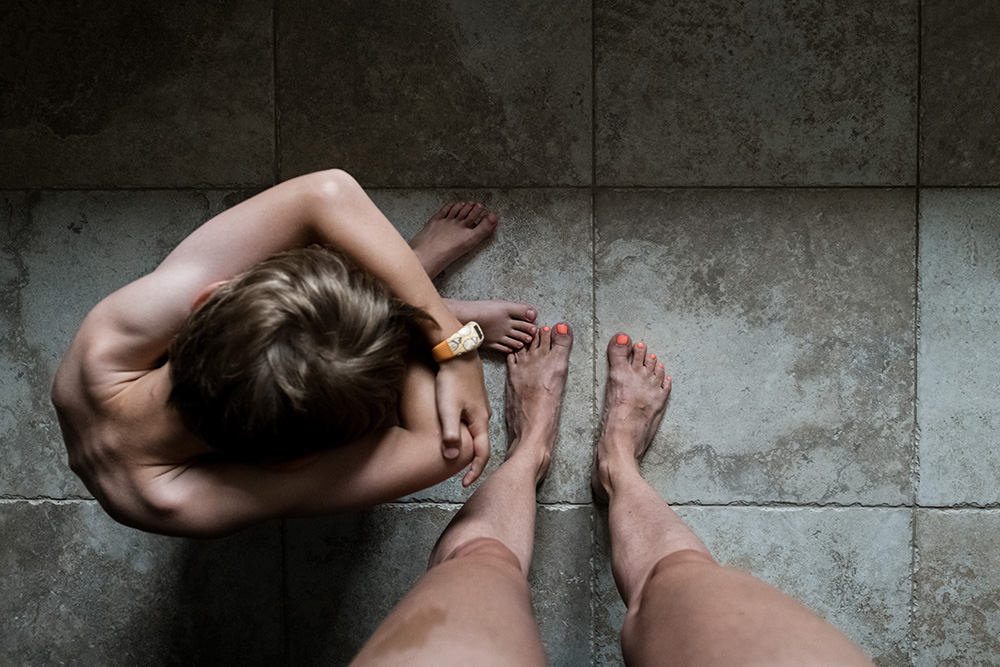 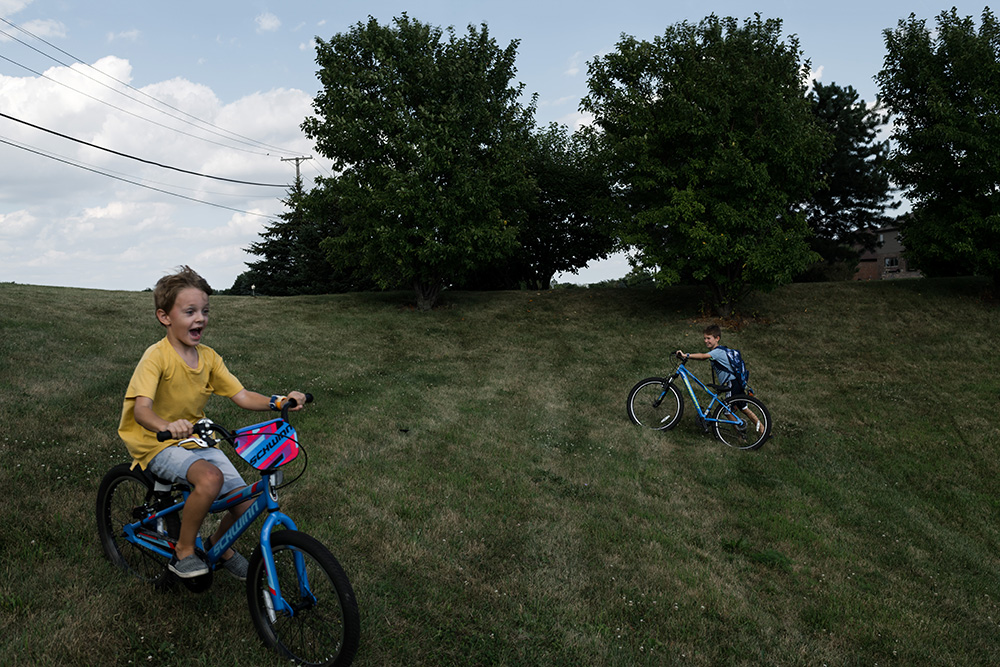 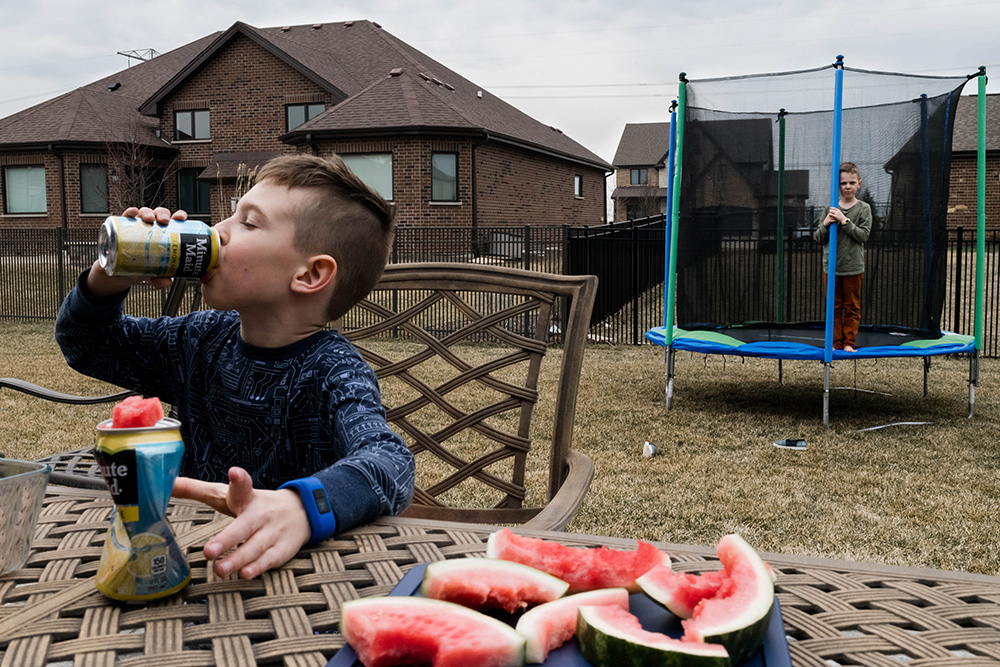 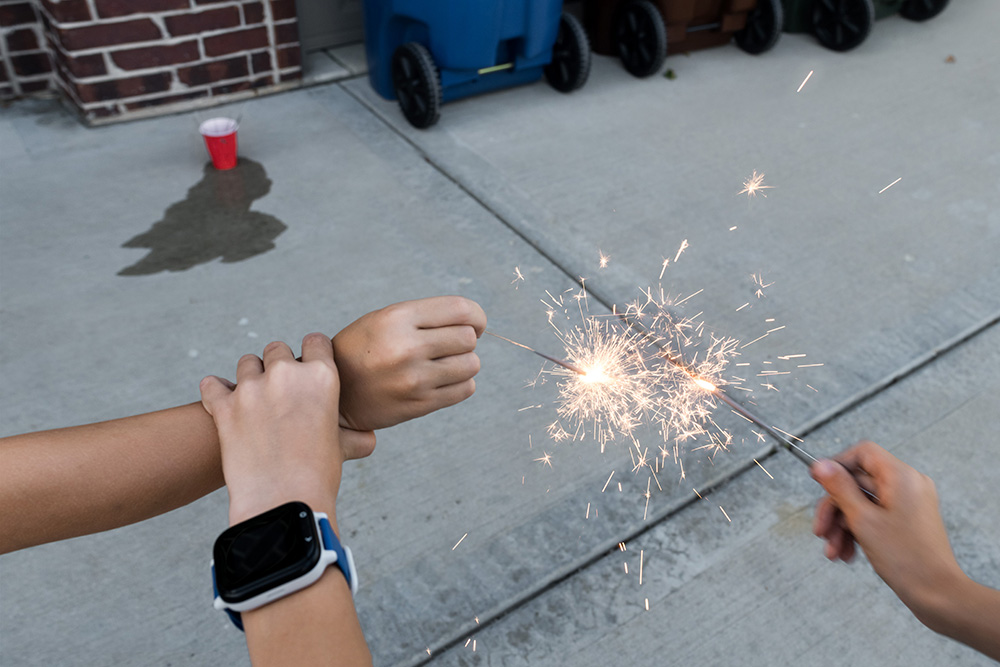 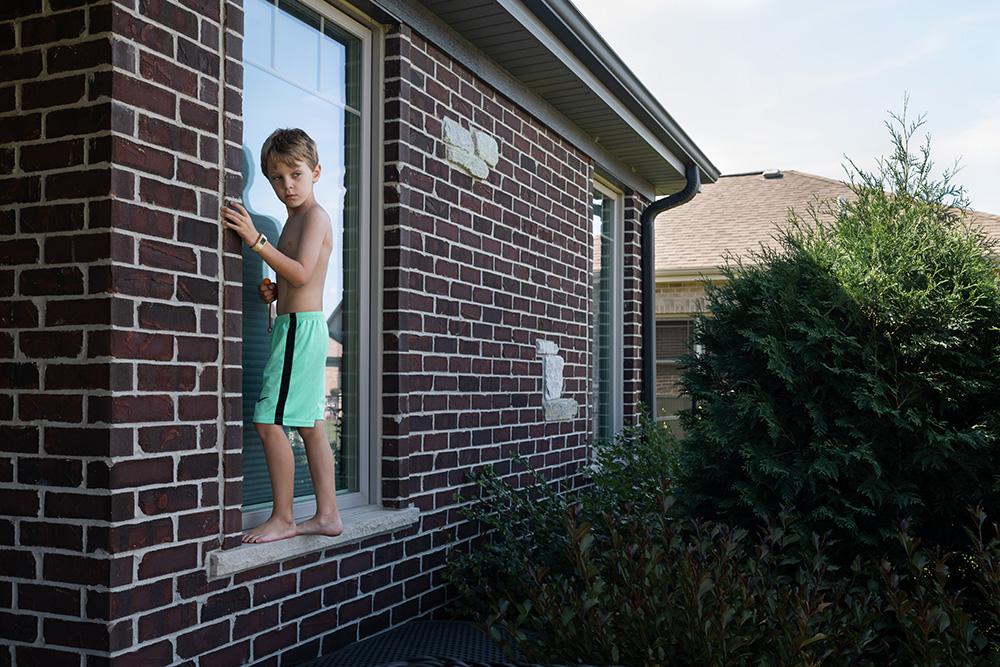 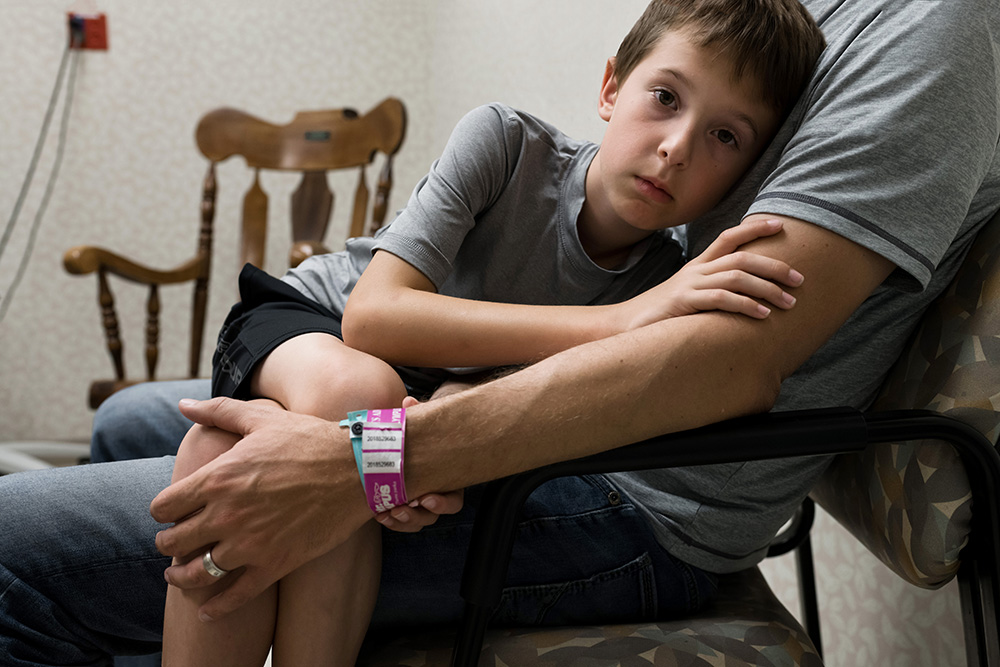 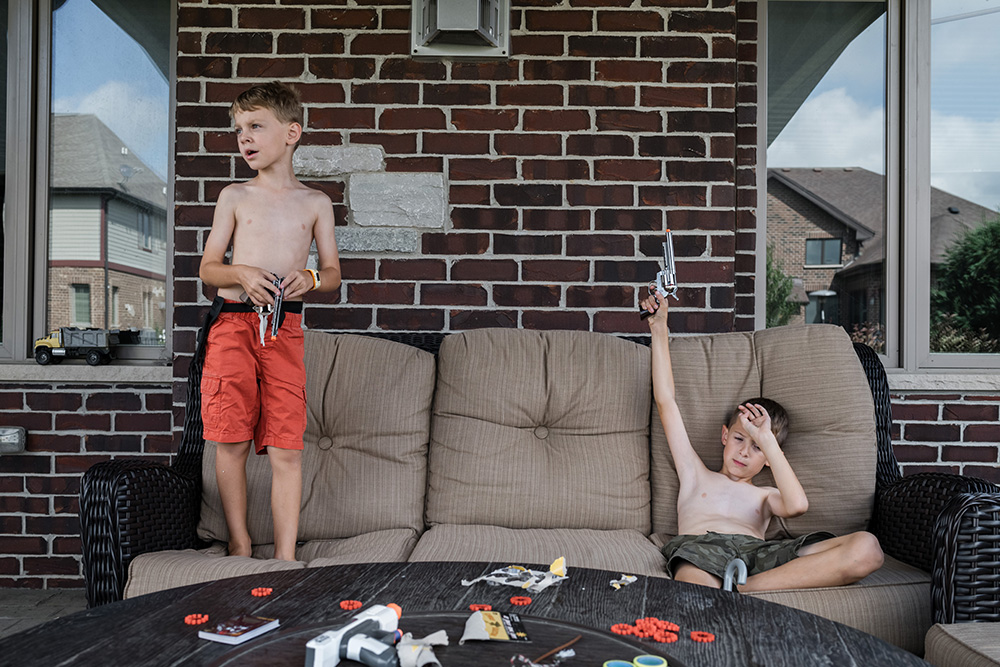 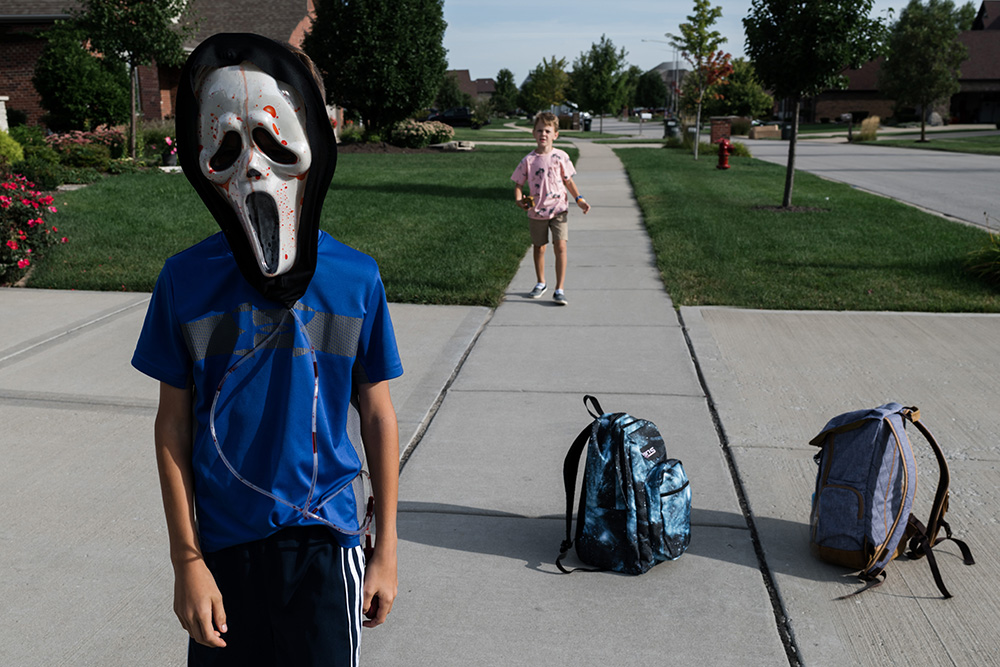 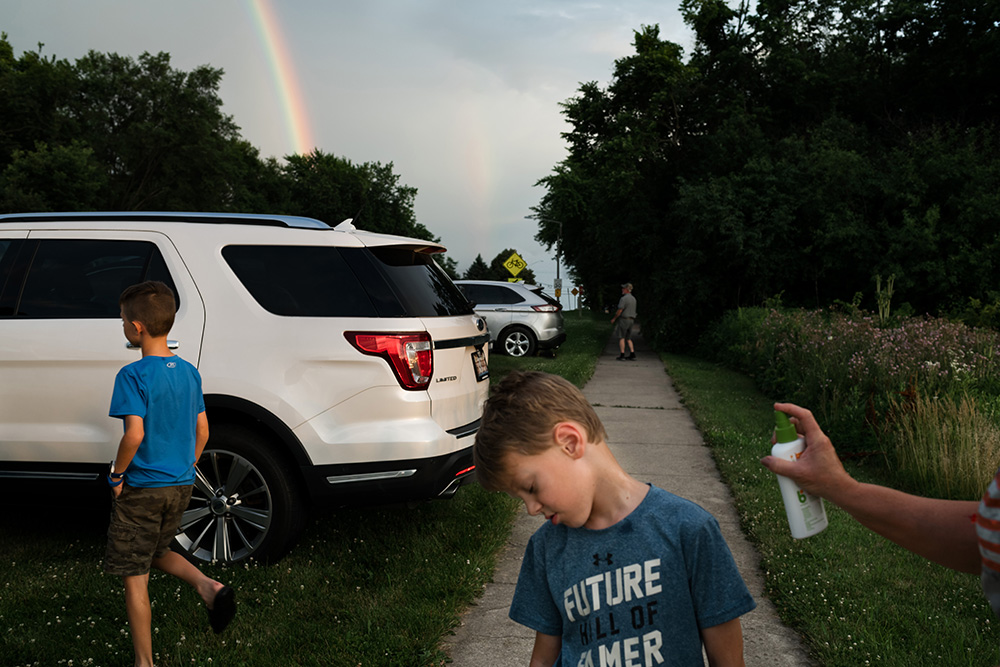