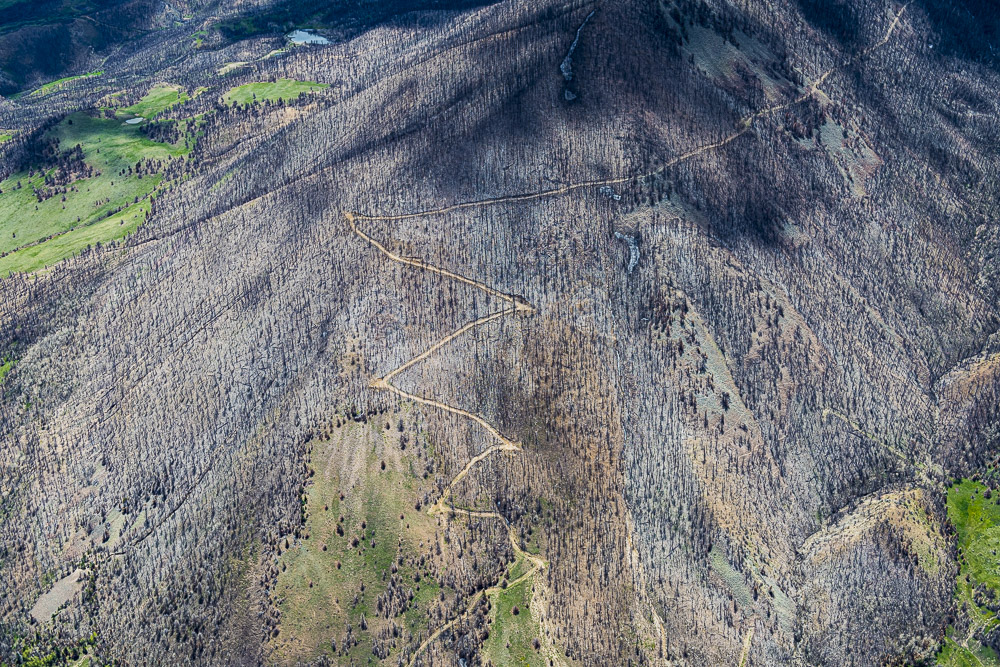 Every landscape holds memory, even if it’s simply the history of it’s trees and rocks. Unfortunately new histories are being created by the destruction of wildfires. Photographer Evan Anderman has been documenting the effects of wildfires in Colorado and its regions for close to two decades for his Phoenix Project: Rising from the Ashes. In his research, he shares a startling fact: Climate change slows recovery even more, so that on the human time scale, fires effectively change the landscape permanently. Meaning that we will not see the forests return to health in our lifetimes, perhaps our children’s, and perhaps forever. His documentation is important in understanding how the landscape recovers from trauma, and how we are managing our efforts in the era of climate change. I had the pleasure of reviewing this project at CENTER’s Review Santa Fe.

Opening on May 7th and  running through June 6, 2020, Evan’s photographs will be a 3-person exhibition: Intersections: A Collaboration between Evan Anderman, Virginia Folkestad and John Morrison at the Sandra Phillips Gallery in Denver, CO.

Evan Anderman (b. 1964 Denver, CO) is a Denver based social landscape photographer who seeks to challenge the intricate relationship between human development and the natural world. His aerial and terrestrial photography endeavors to bring into focus the difficult to see wide-spread elements of the way our society uses the land. His work can be found in the collection of the Denver Art Museum and many private collections across the country and has been exhibited at institutions nationally and internationally. He received a BSE in Geological Engineering from Princeton University and a MSE and PhD in Geological Engineering from Colorado School of Mines. He has served on numerous non-profit Boards and is currently the President of the Board of CENTER in Santa Fe, NM. 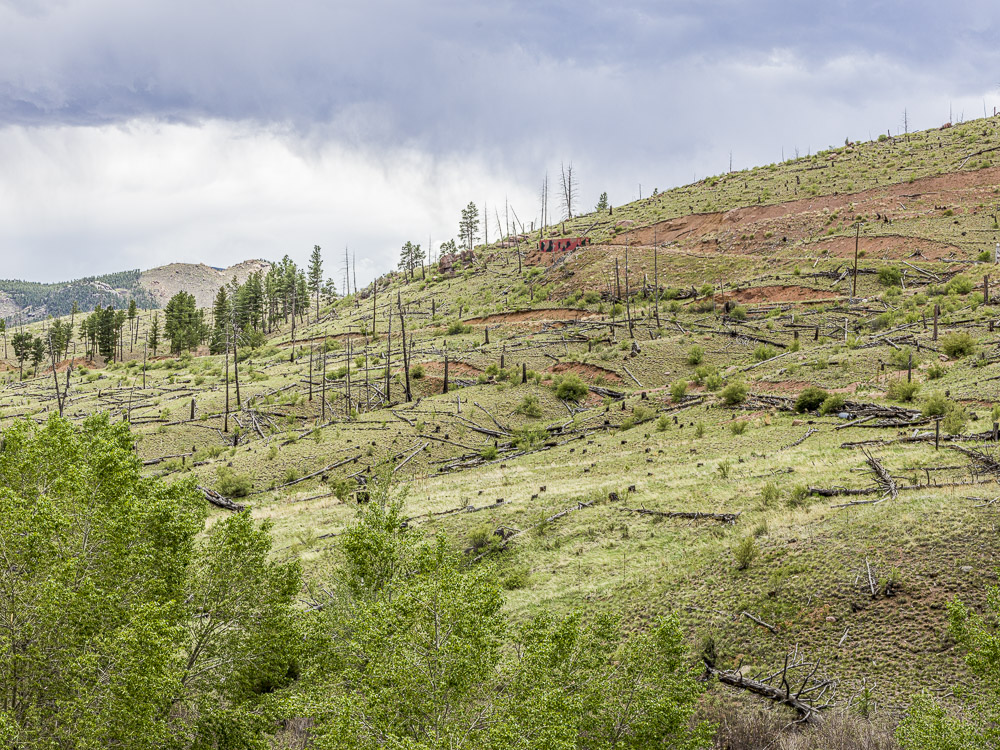 Phoenix Project: Rising from the Ashes

The Phoenix Project is a long-term documentation of the effects that wildfire has on the natural and social landscapes of Colorado and the region. Our relationship with fire is complicated: we are drawn to it and have learned to control it over the millennia. But our control of wildfires has resulted in forests becoming overgrown. Now when fires happen they tend to be larger and more intense than before, effectively sterilizing the landscape. Climate change slows recovery even more, so that on the human time scale fires effectively change the landscape permanently. These images illustrate how the landscape responds and recovers from fire, and how we are learning to manage our forests in a more natural way.

I became interested in this subject from flying over the Hayman burn area in the foothills southeast of Denver near Deckers. This fire happened in 2002 and became the largest fire in Colorado’s recorded history, burning over 138,000 acres. That’s the first time I remember the eerie orange light from the smoke plume or even the large pieces of ash falling in Denver. 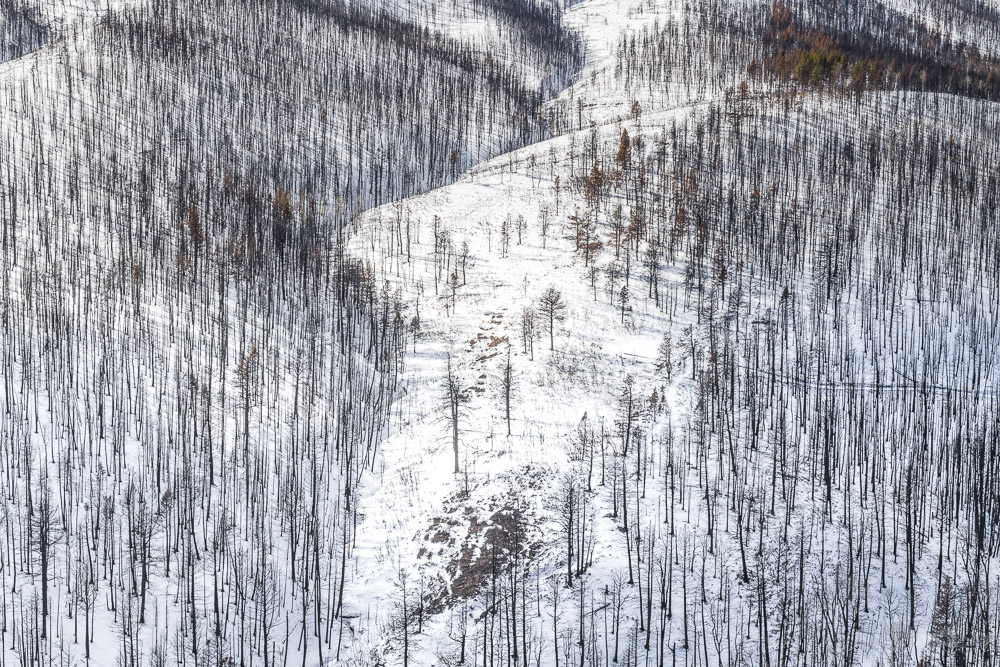 I was never very happy with how I captured the vast burn area from the air. I did get some good images of particular areas, showing various effects like the changes in runoff from the lack of vegetation holding it back. So I decided with this project to also shoot from the ground and was struck by how little has grown back over 15 years later and by the disregard that people had for the area now that it wasn’t forested. At numerous places I saw discarded trash lying around on the ground.

I decided to visit other burn areas as well, the Black Forest Burn of 2012 being next. This fire burned less than 15,000 acres but almost 500 buildings were destroyed causing a significant loss to residents. Many having no choice but to rebuild amongst the burned trees. 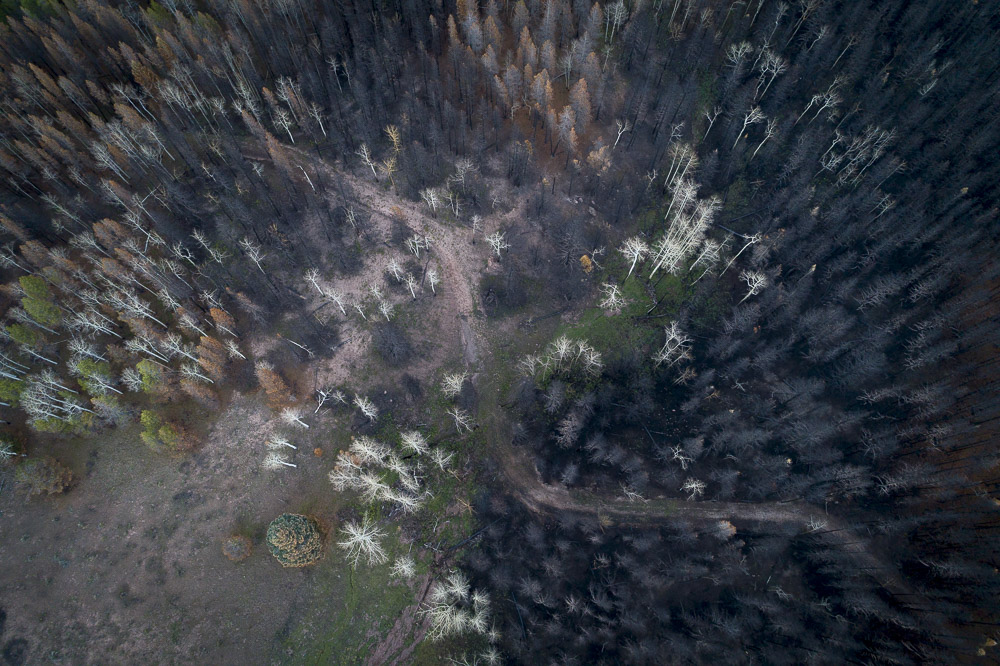 The Buffalo Fire burned in Silverthorne in June, 2018 above the popular Wildernest development. The fire was fought very aggressively since it threatened so many homes. I was intrigued to see that the fire retardant really only coats one side of the trees, which makes sense since the aircraft is moving so quickly when it makes the drop. 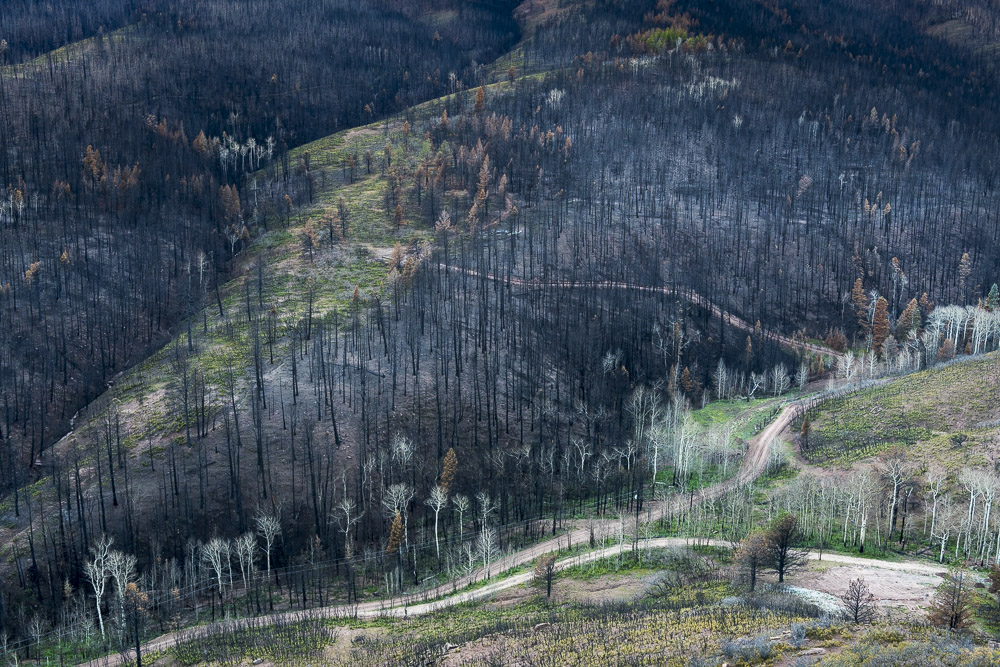 I started shooting the Spring Creek burn area off of La Veta Pass in southern Colorado. This fire burned for a couple of months in the summer of 2018 and is currently the third largest in Colorado history at 108,000 acres. I am really intrigued by this area and have visited it a number of times. It is interesting to see the variation in burn intensity at different points along the toe of the fire. Some trees were merely scorched and may still be alive, some trees had scorched needles that fell off later to form an orange carpet of needles, or the lightly burnt white aspen trees that contrast with the burnt pine trees. It appears that the aspen trees may have survived the fire, perhaps due to higher moisture content? They only look minorly scorched, while the pine trees are completely black.

The Naranjo Fire in north central New Mexico was a small fire in the summer of 2019. The Forest Service let this low-intensity fire burn as a way of reducing fuel loading to improve the health of the forest and improve habitat for wildlife. 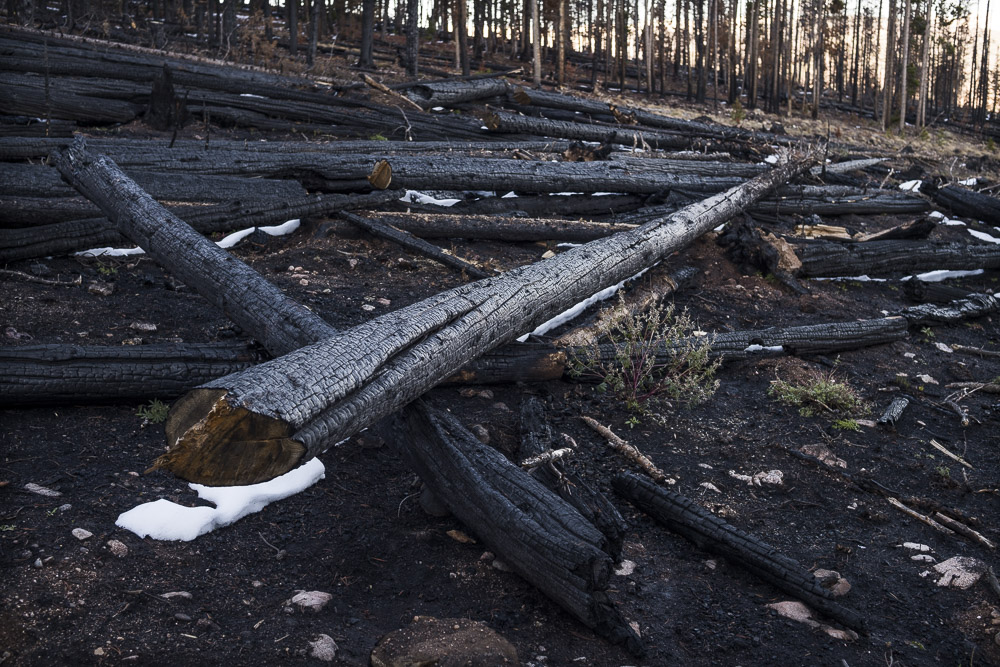 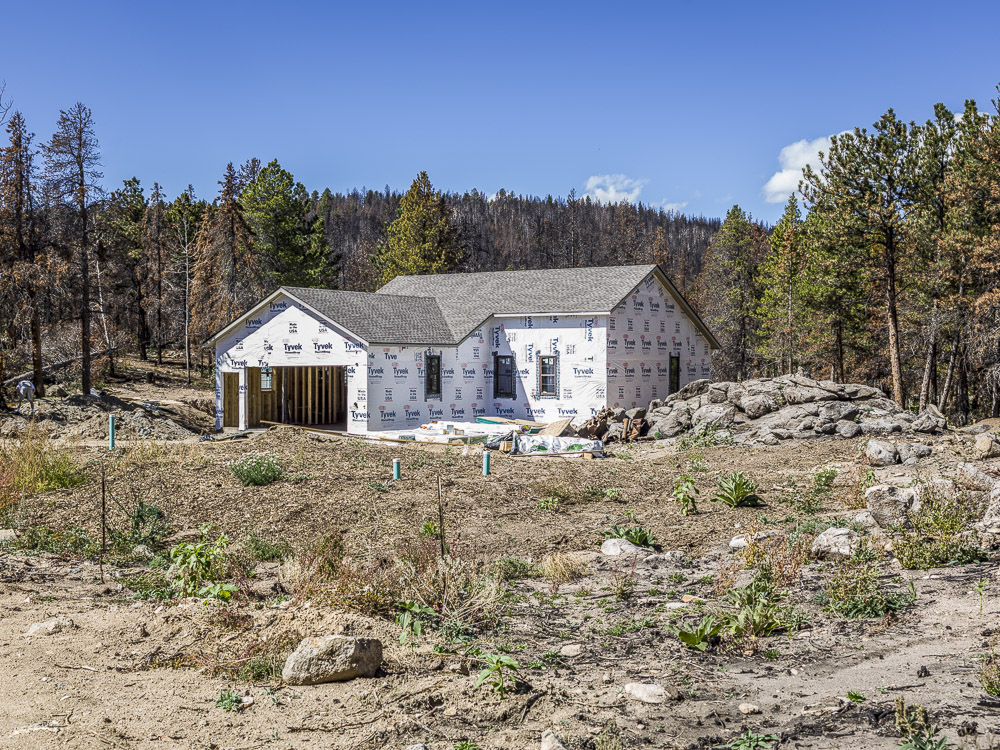 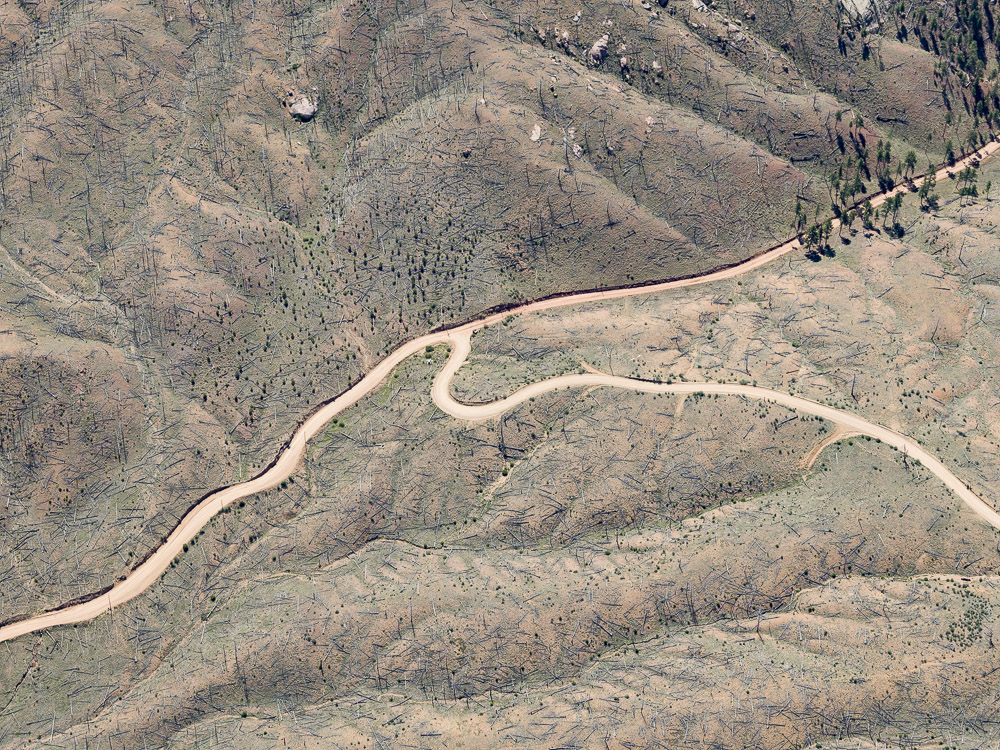 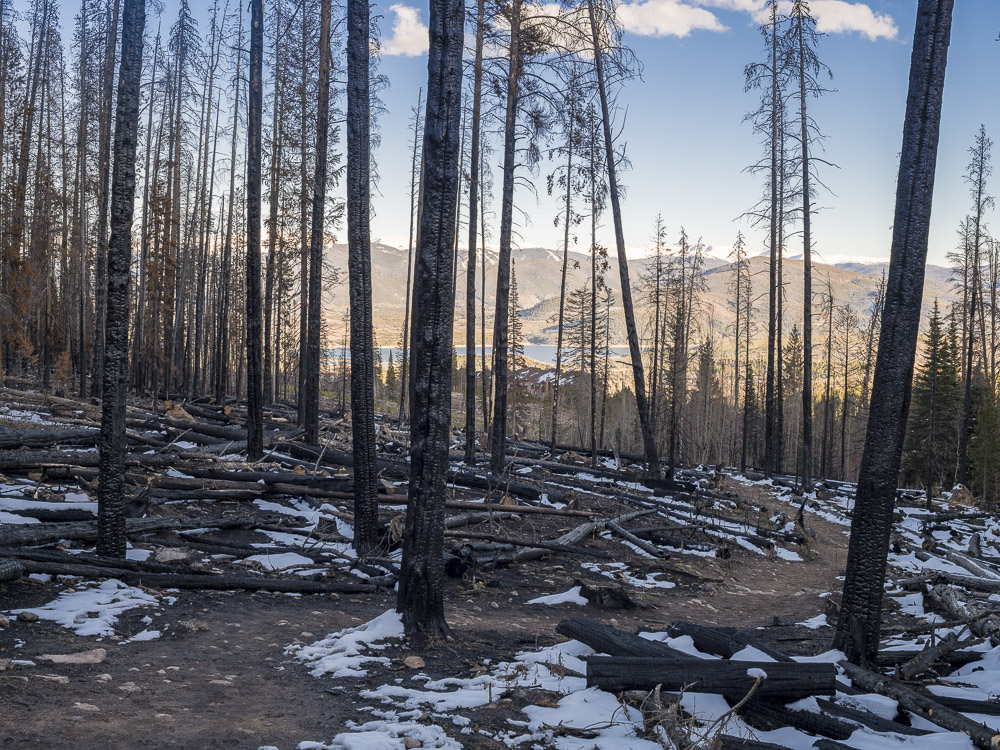 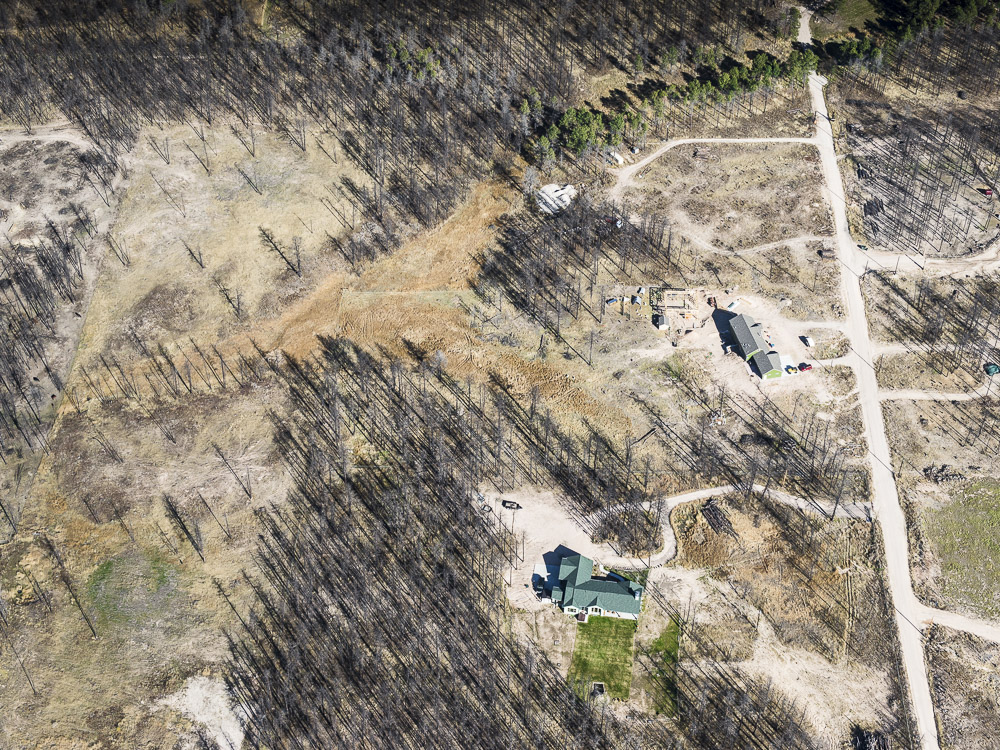 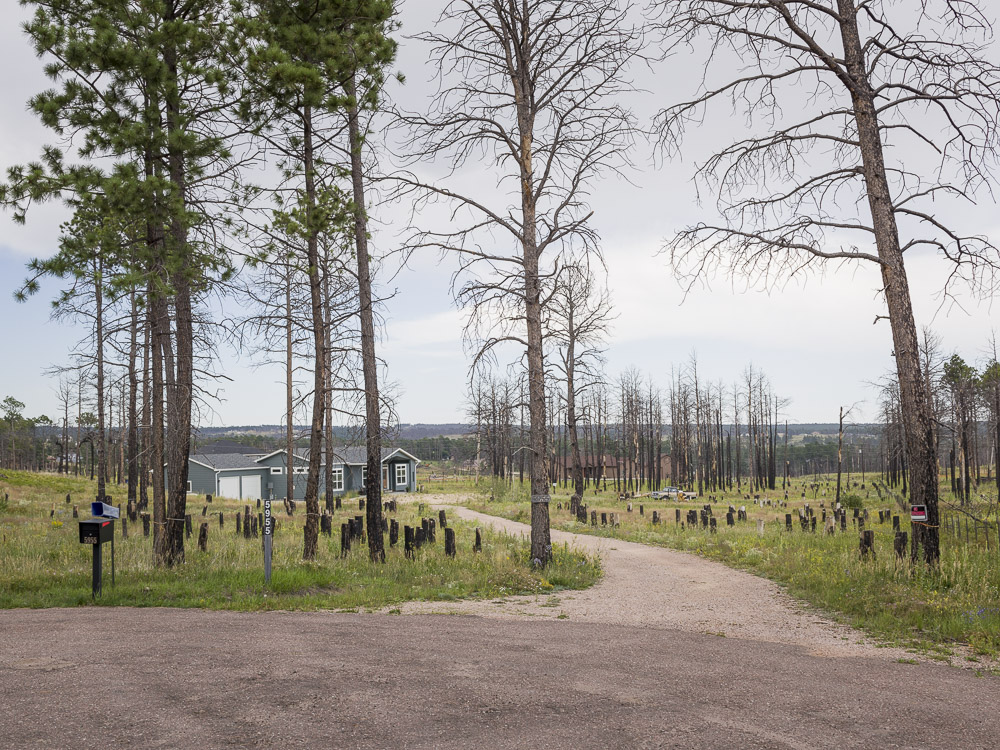 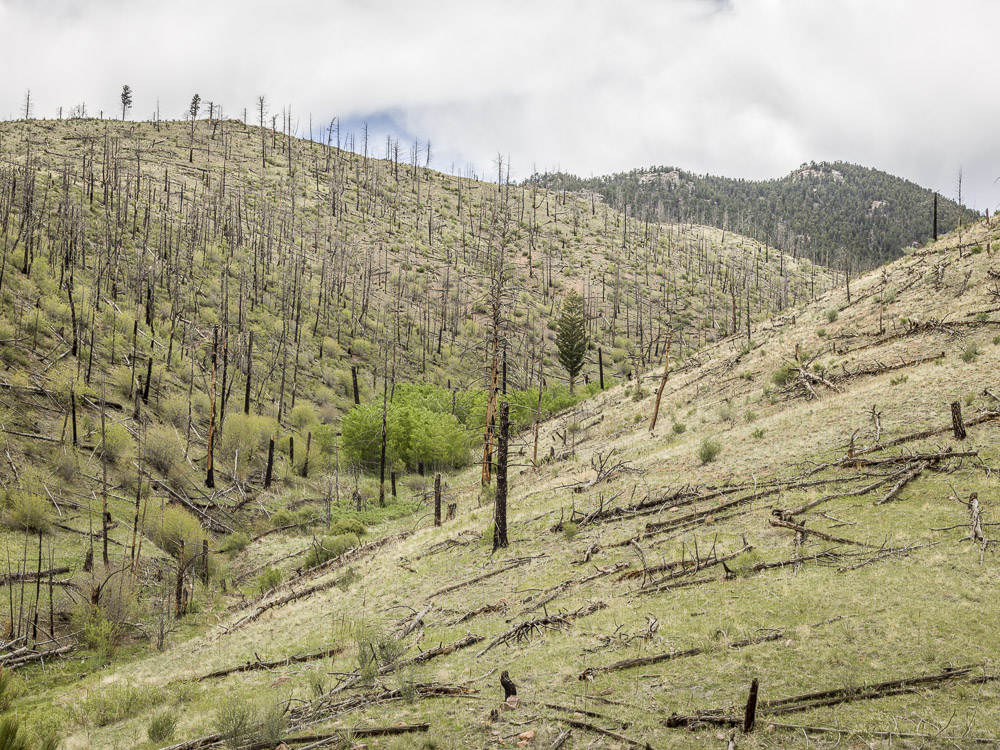 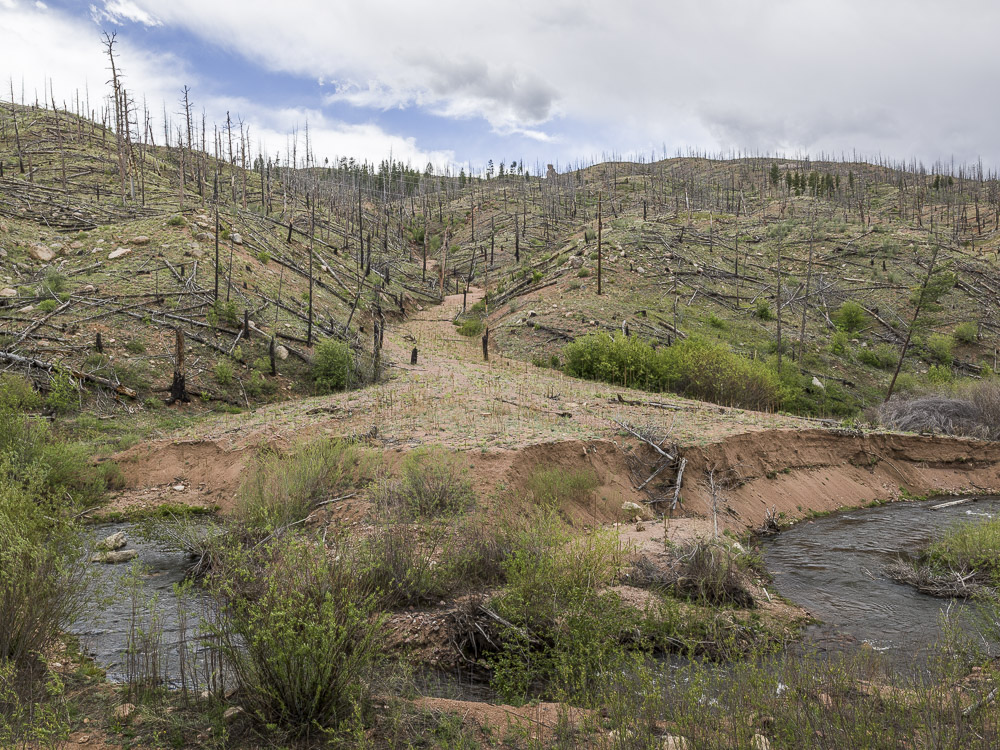 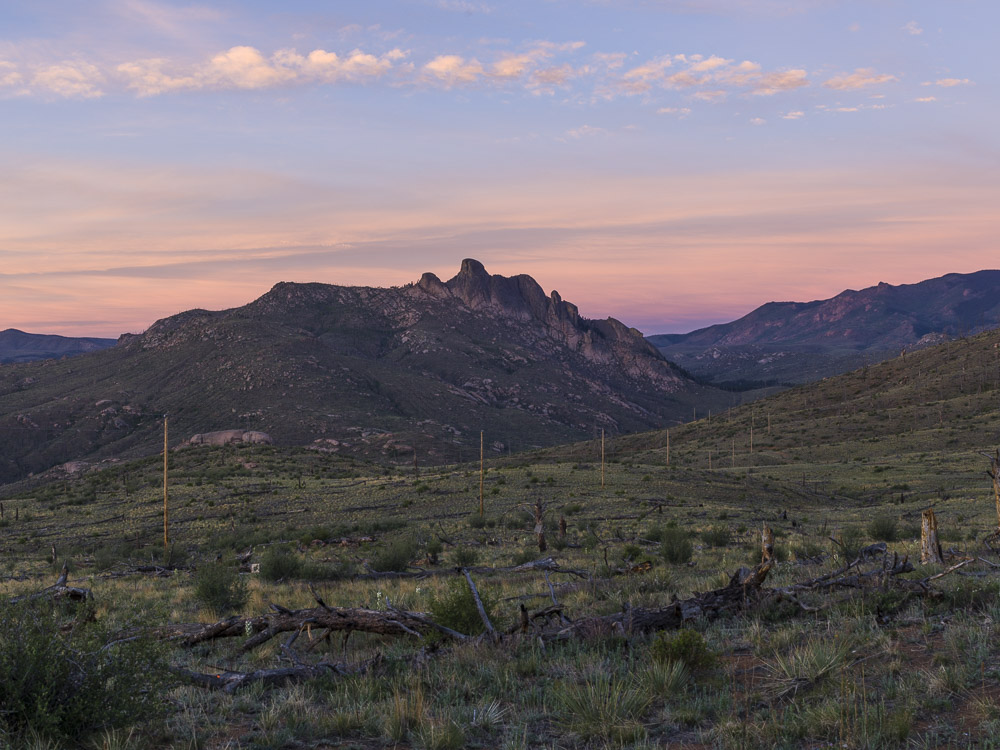 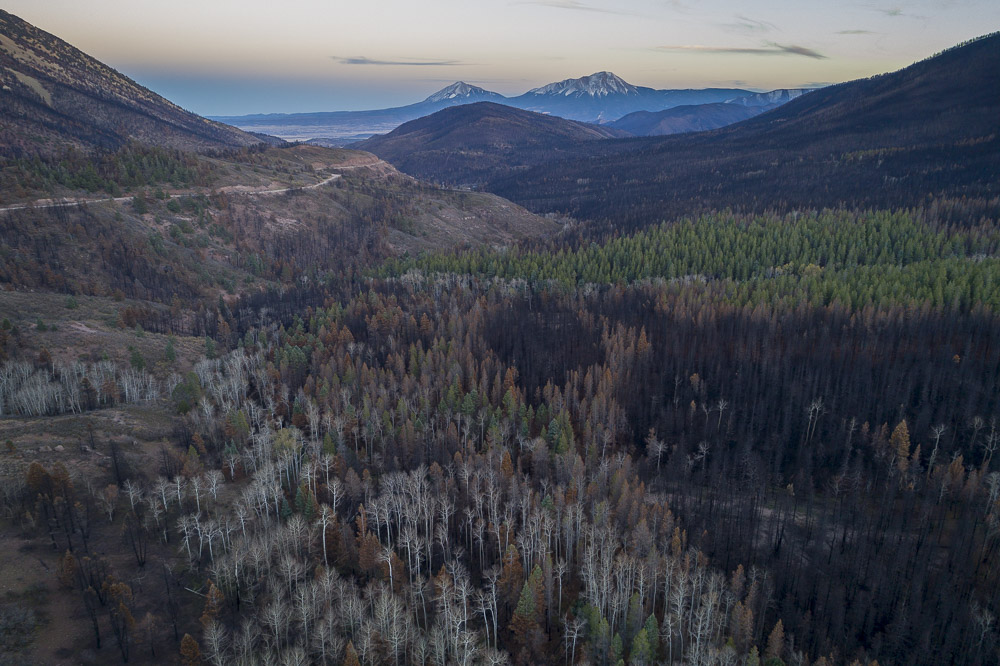 NEXT | Matt Kapp: A Century Downtown: A Visual History of Lower Manhattan >
< Siri Kaur: She Tells All | PREV