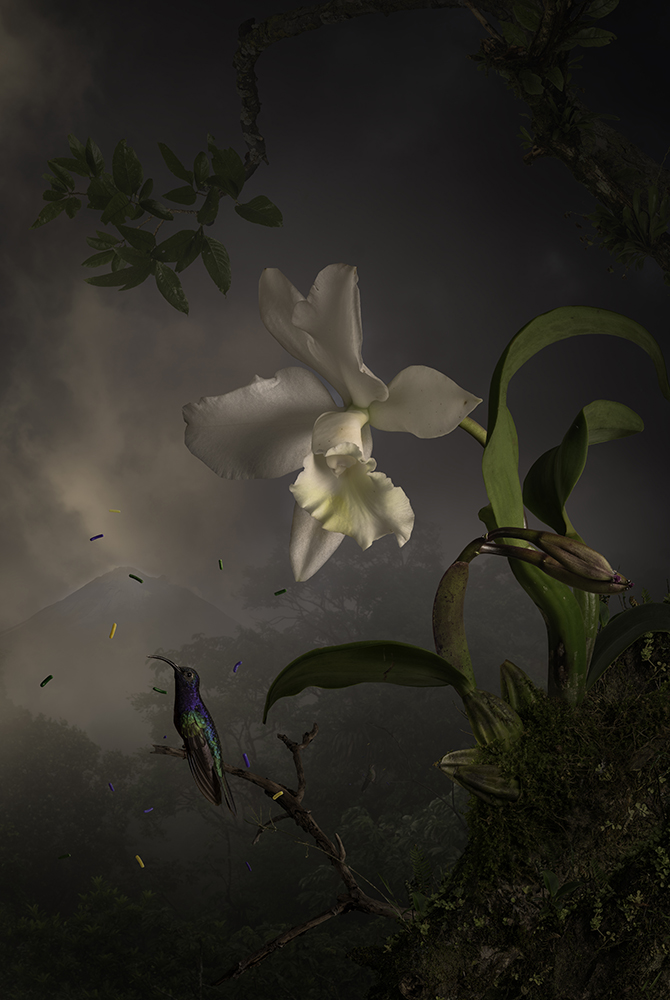 Projects featured this week were selected from our call-for-submissions. I was able to interview each of these individuals to gain further insight into the bodies of work they shared. Today, we are looking at selections from three different series by Jason DeMarte: Arcadia, Adorned, and Confected.

Jason DeMarte is an established artist best known for his highly detailed and seductive flora and fauna photo assemblages. His work has been exhibited in galleries and museums, both nationally and internationally. DeMarte has been featured in journals, textbooks and publications including; the British Journal of Photography, Huffington Post, Feature Shoot, Hi-Fructose, Oxford American, The Elements of Photography, Manifest, Photo Review, and Black Warrior Review. Some notable exhibitions include: The Museum of Un-natural History at Clamp Art, New York City; Context at Filter Photo Space, Chicago; and The National: Best Contemporary Photography 2015, Ft Wayne Museum of Art. DeMarte’s solo exhibitions include shows at: Rule Gallery in Denver, CO and in Marfa, TX; Denver Botanical Gardens in Denver, CO; Boulder Museum of Contemporary Art in Boulder, CO; Wessell Synman Gallery in Cape Town, South Africa; the Detroit Center for Contemporary Photography in Detroit, MI; and Gallery Kayafas in Boston, MA. His series Confected is also part of Chicago’s Museum of Contemporary Photography Midwest Photographers Project and his newest series Adorned was selected as one of Photo Lucida Critical Mass top 50 series. Jason is a tenured professor of art at Eastern Michigan University. He received his B.F.A. in Photography from Colorado State University and his M.F.A in Photography from the University of Oregon. 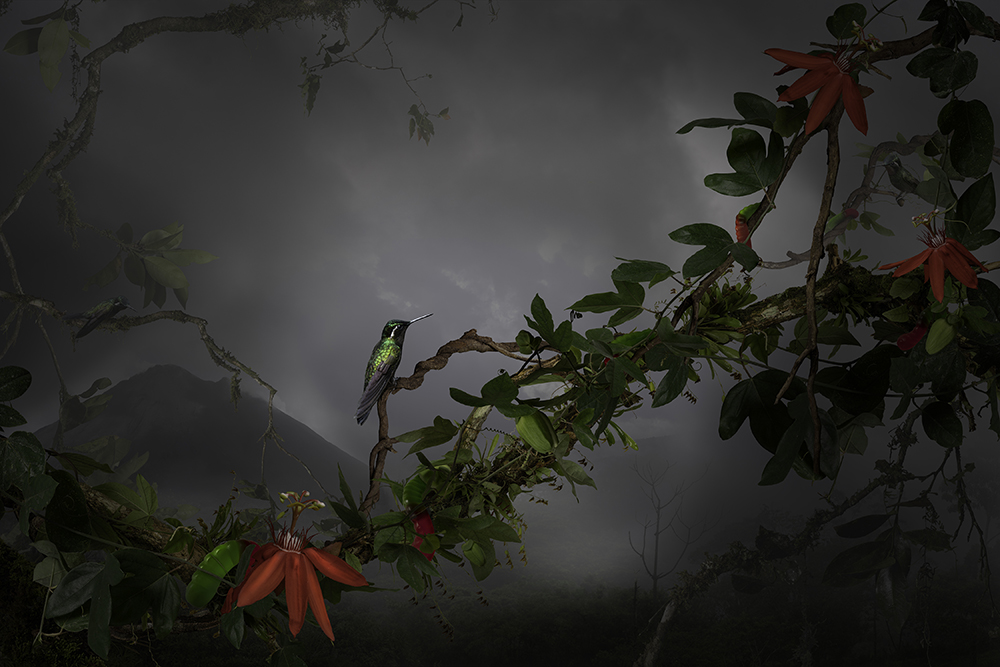 I am interested in modern understandings of the natural world and how that compares to the way western society approaches its immediate consumer environment. It’s important for me to compare established idealist utopian ways of representing the landscape to the hyper-perfect way products and modern consumer life are represented in media. I’m particularly interested in the idea of disillusionment through false or misleading representation. I’m interested in creating photographs that merge augmented forms of life and colorful processed foodstuffs with idyllic pop material goods, in an effort to create a dialog of consumption, duplicity and homogenized ecstasy. I work digitally combining images of enhanced flora and fauna with commercially produced and processed products. I look at how these seemingly unrelated and absurd groupings or composites begin to address attitudes and understandings of the contemporary experience. I represent the natural world through unnatural elements to speak metaphorically and symbolically of our mental separation from what is “real” and compare and contrast this with the consumer world we surround ourselves with as a consequence. Ultimately this work is an investigation into the manipulation of truth.

My process draws from a long history of constructed narratives in photography, artist like Oscar Gustave Rejlander and Julia Margret Cameron, were early pioneers in manipulating truth with the medium, while later artists like Gregory Crewdson, Jeff Wall and Anthony Goicolea made the ordinary surreal with their highly choreographed stills. My process aims to simultaneously embrace a manipulation of truth by hyper exaggerating the ordinary and to also work within a kind of truth by utilizing the inherent believability of the photographic medium.

Like the early tableau photographers I draw inspiration from painting, specifically naturalist painting from movements like the Hudson River School. I’m interested in rekindling the romantic notions of nature while simultaneously subverting those romantic notions by juxtaposing pop consumption and visual gluttony. 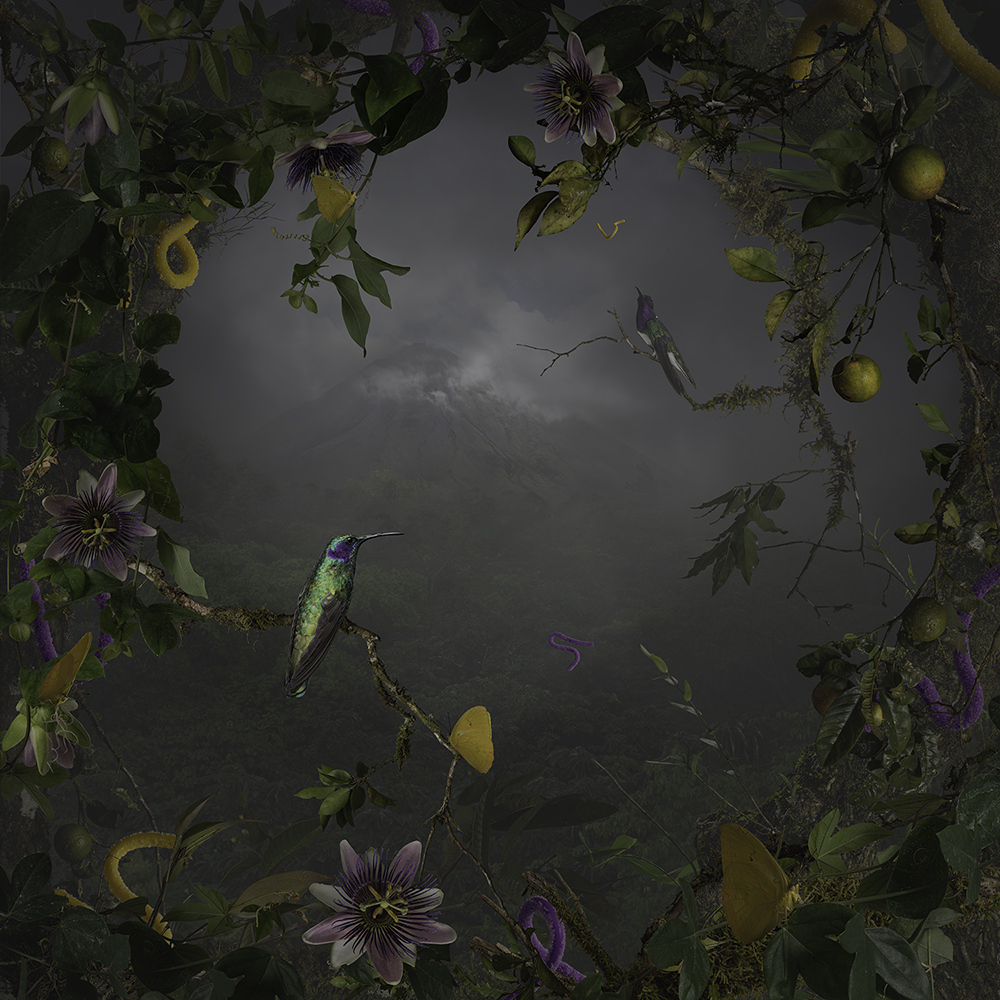 Daniel George: What motivated you to begin making these assemblages—and drawing comparisons between the natural world and consumer culture?

Jason DeMarte: I first started looking at this comparison in my early work. I was making images in natural history museums and started introducing commercial products to the images in an effort to draw comparisons to the fabricated “natural” scenes of the museum’s dioramas. I was interested in how marketing strategies in advertising seemed to be emulated in the way that the museum’s dioramas were presented. After a number of years of making these images, I became frustrated by the limitations of trying to find scenes to photograph, and wanted to gain more control over my compositions. I began working on experimental images where I was collaging multiple images from museums, bio parks, and botanical gardens, and from these experiments, I realized I could flesh out my ideas more effectively if I collected objects and brought them to my studio to shoot separately. This was a huge shift in the work. Much like a painter, it gave me the freedom and control to make compositions from scratch. 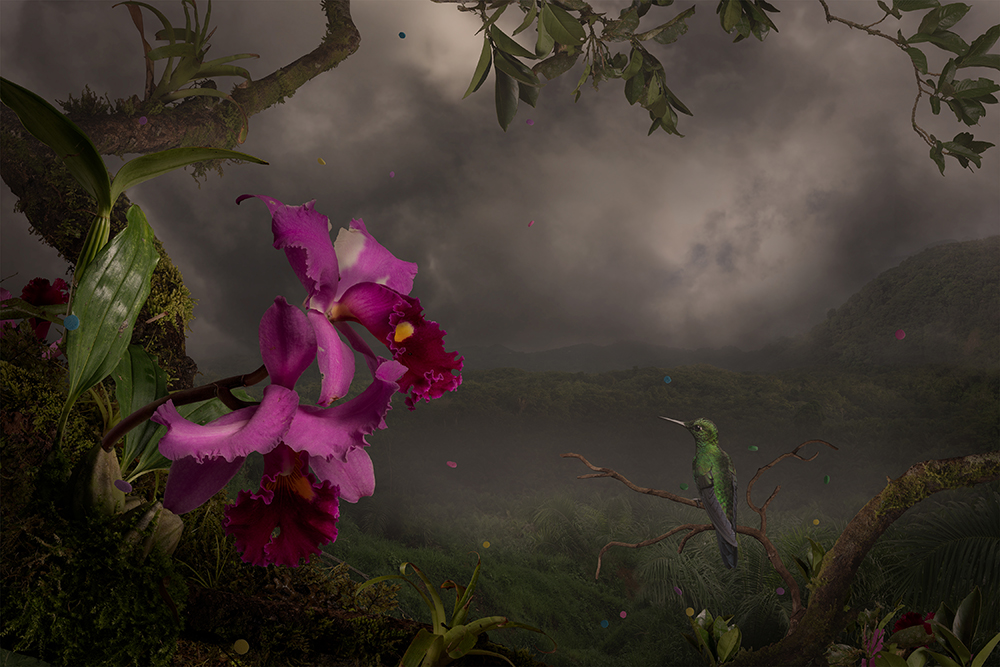 DG: I am attracted to the hyper-excessive aesthetic that you have employed on various projects throughout the years. In regards to this work, you describe this as “visual gluttony.” Tell me more about your allure to this style.

JD: Living in a culture that values consumption as a sign of progress and success, I am acutely aware of how this idea of indulgence is injected into our daily life. I am drawn to create work that reflects the hyper-excessive world we find ourselves in, and how that seems to spill into every nook and cranny of our environment. Instead of fighting this language I work to use it, and exaggerate it in an effort to capture waning attention spans, while simultaneously subverting a viewer’s approval. Part of this comes from my experience as a commercial product photographer early in my career. Thinking about the presentation of products in a seductive yet completely fabricated way left me with questions about authenticity and motive. I am drawing attention to this cultural priority and manipulation as it exists outside of traditional marketing and has now seemly been adopted universally. 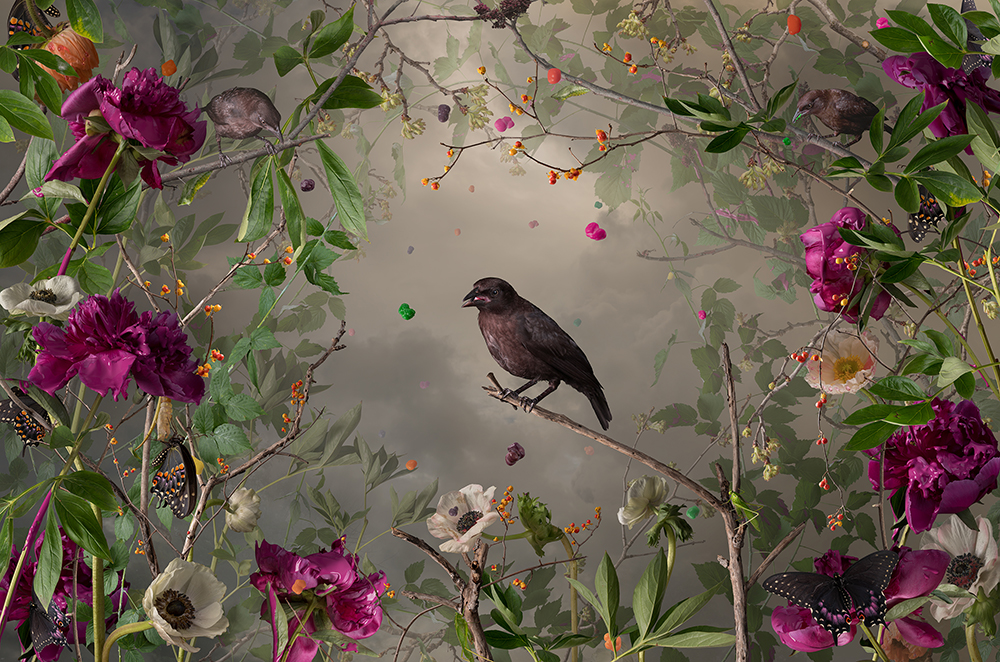 DG: In your photographs, you have primarily chosen to maintain traditional still-life subject matter. I think about how the Dutch often used birds, in some ways, to represent the human soul—which certainly drives the way I read further into these images. How reliant are you on long-established modes of interpretation? Would you consider this type of understanding necessary to fully appreciate the complexity of what you’re doing?

JD: Though it may help expedite the viewer’s understanding of the work, I don’t believe knowledge of these modes of interpretation are necessary. I feel this connection to birds, especially those that engage the camera, occurs somewhat naturally. I see the birds as surrogates for our human experience, and I am careful to choose birds that engage the camera. Through that visual connection, I aim to create a dialog with the viewer. In the earlier work, I saw the birds as representations of our domestic relationships and culture, the type of birds I photographed were strictly birds that co-habituated with humans. As I watched these birds feed, create homes and raise young outside my suburban window, I felt they mirrored our own existence. They became a witness and ultimately participants to the commercially aesthetic world we have created around us. 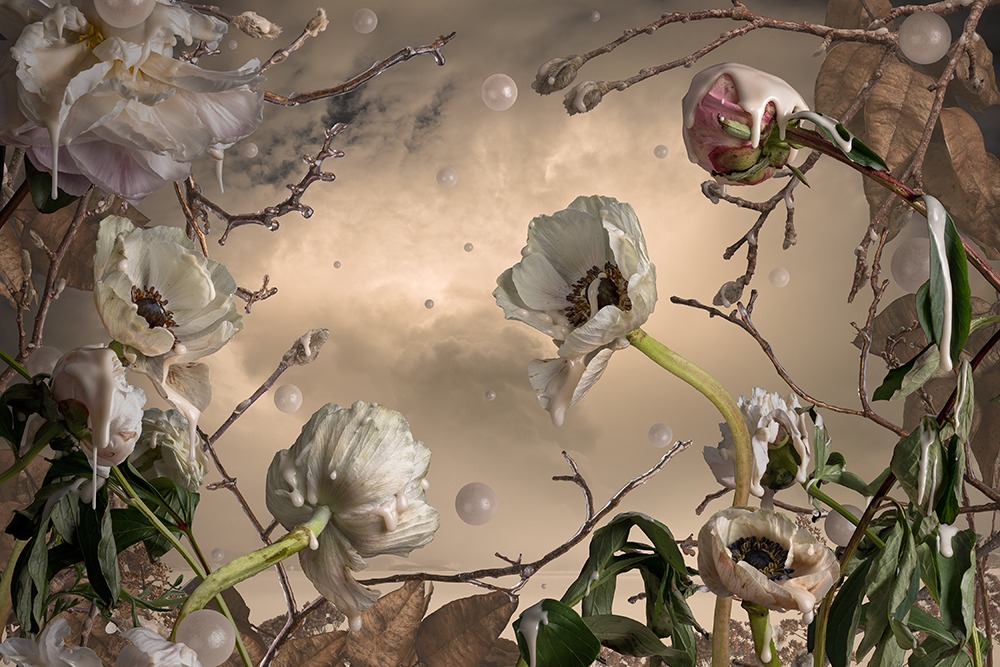 DG: On the topic of visual components, it seems that a storm brewing in these images—for me, creating a greater sense of unsteadiness. Could you further elaborate on your use of weather and atmosphere?

JD: I’m drawn to dramatic skies for their ability to simultaneously represent uneasiness and tranquility. In the Adorned series I was particularly interested in photographing backlit skies, usually after a storm. I wanted to reference the sublime vanilla skies of impressionist painting, but also the glow from forest fires or some other sort of catastrophe, like atomic fallout.

For example, After the Deluge gets its title from the historical painting by George Frederic Watts which depicted the sky after the story of Noah’s flood. I was interested in this idea of cleansing after a time of immorality or gluttony and the tension in representing that aftermath. I also, of course, liked how the story of the flood plays into climate change and rising sea levels. I see this work as a fictitious aftermath from an overindulgent, culture gone awry, where the world has been so impregnated with our goods that it has become part of its very fabric. 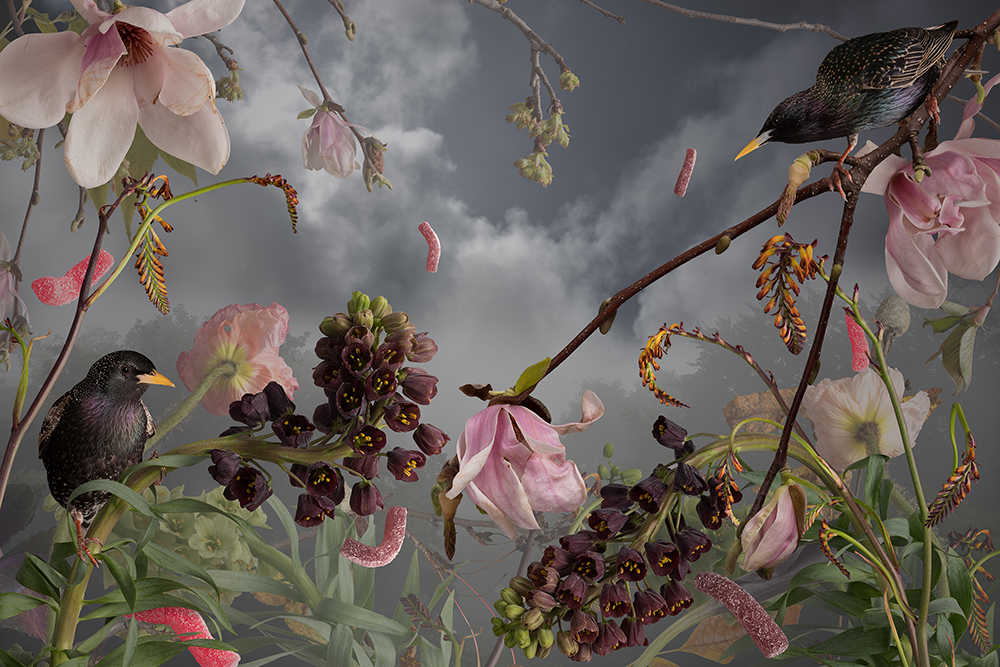 DG: I feel that artists are, to various degrees, more literate than the average individual when it comes to the understanding of a photographs ability to manipulate truth. Why do you feel that embracing the absurd best confronts the medium’s questionable believability?

JD: As photographers know, photography has never been wholly truthful; believable? persuasive? manipulative? maybe, but never really truthful. I’m interested in using this power of photography to play with that believability in the face of absurdity. Absurdity and believability are an interesting pair. By making absurd things believable, I am demonstrating and reflecting on a culture that increasingly believes in false and arguably absurd ideas. 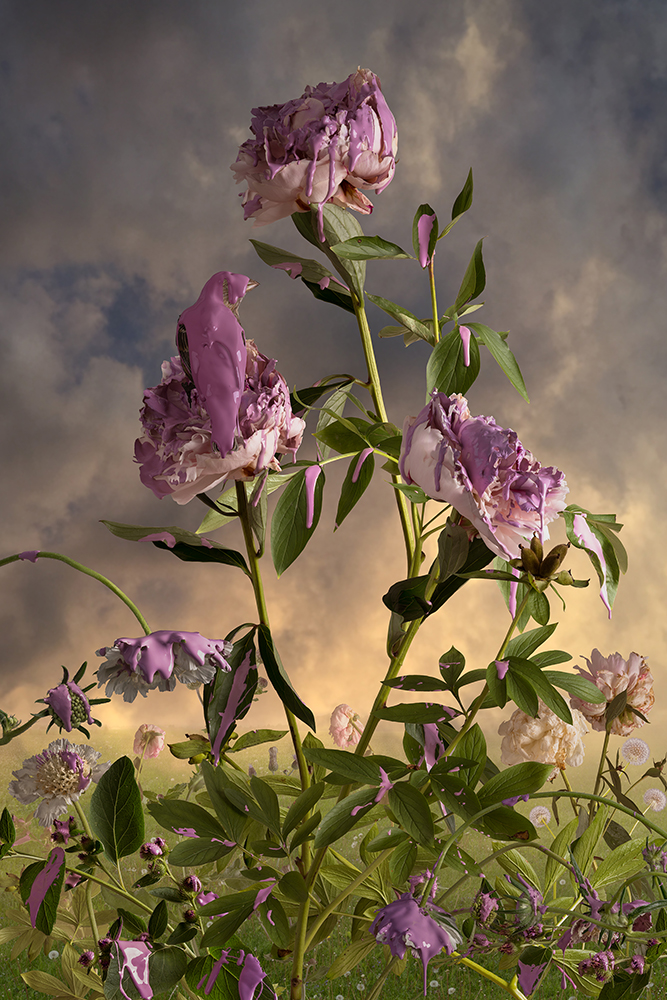 ©Jason DeMarte, After the Deluge, from the series Adorned 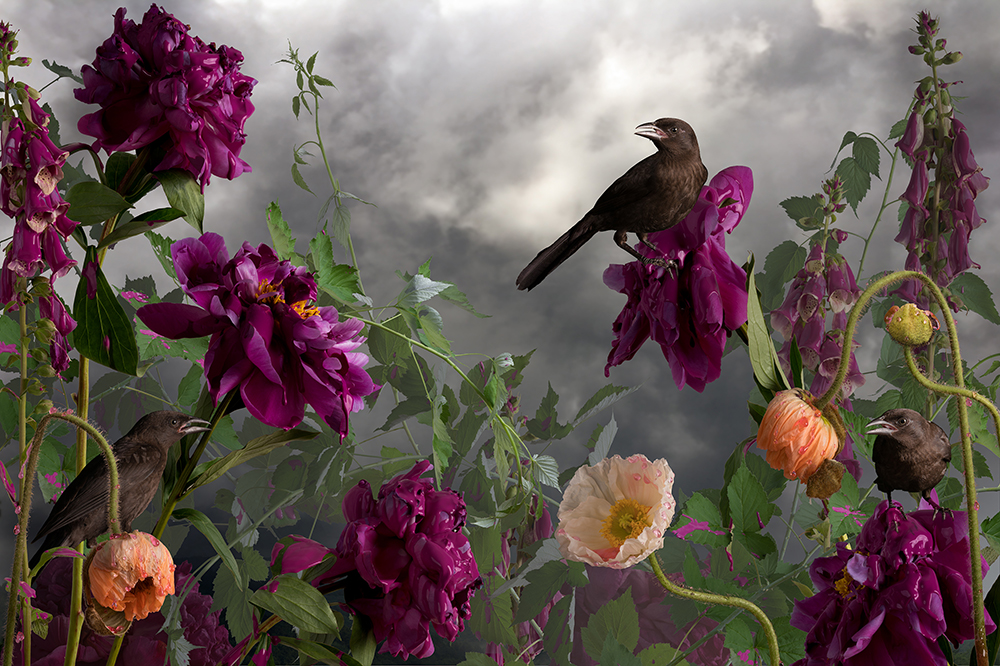 ©Jason DeMarte, Fog of Tranquility, from the series Adorned 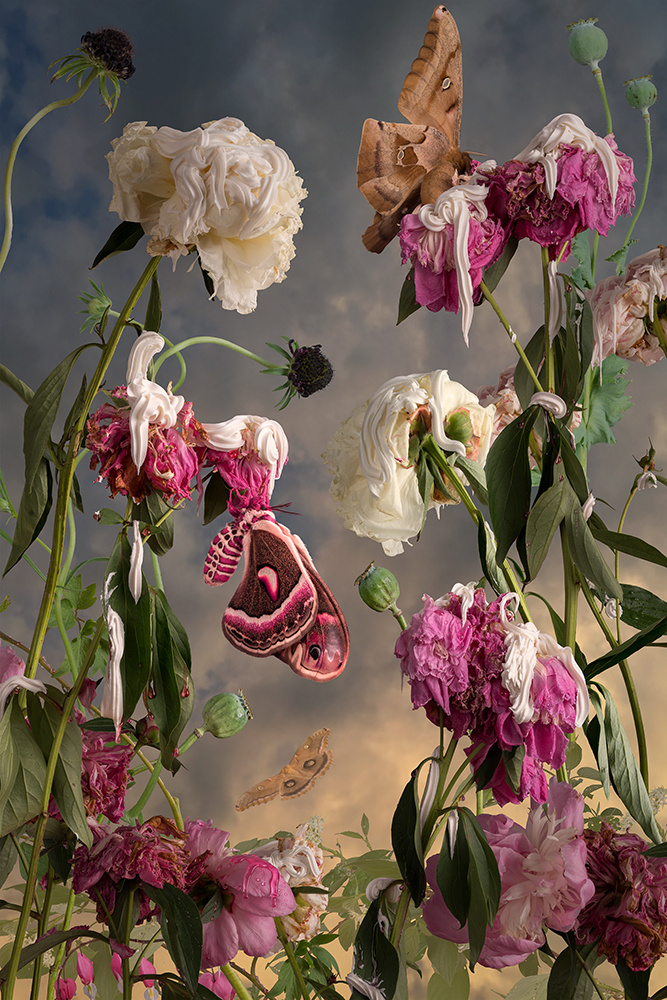 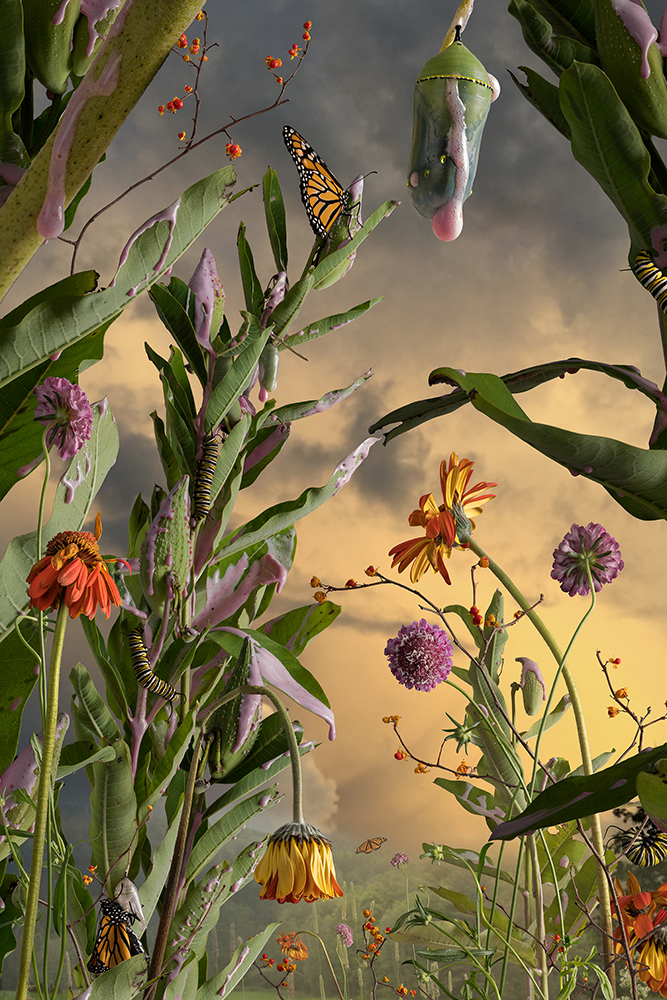 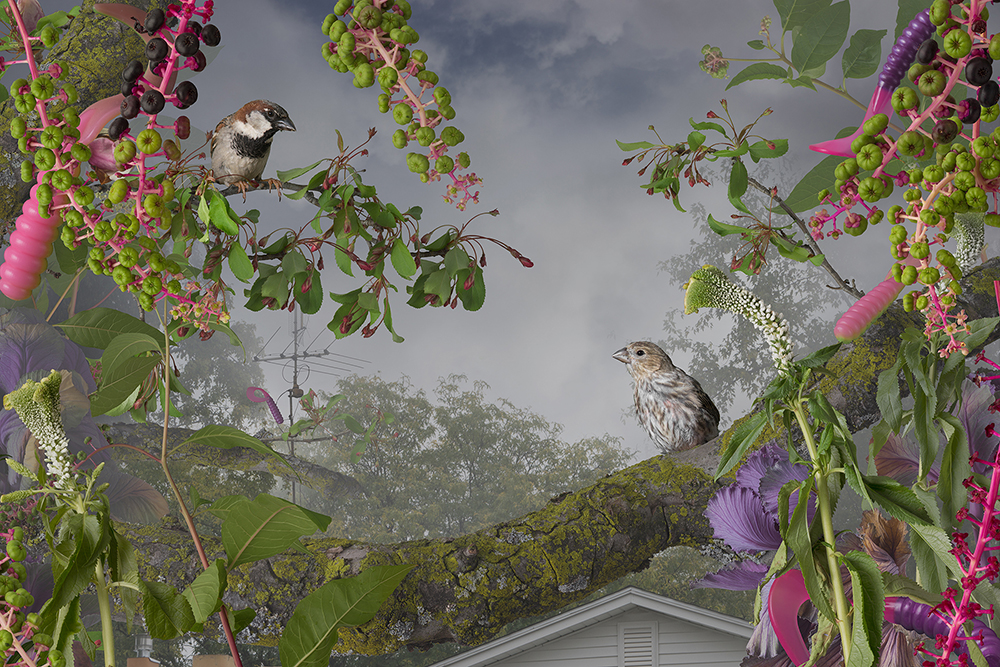 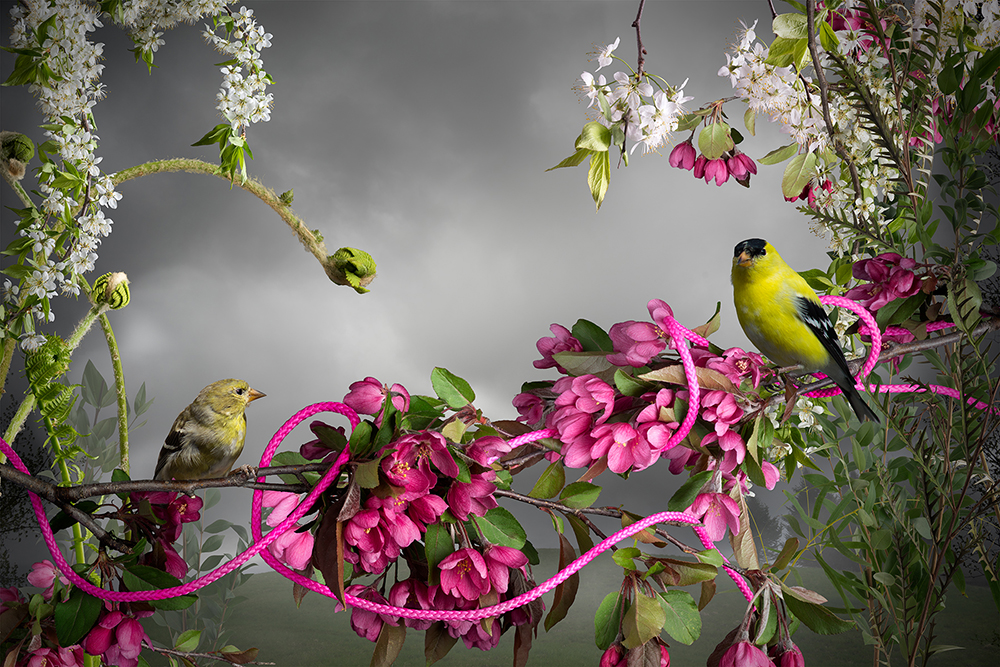 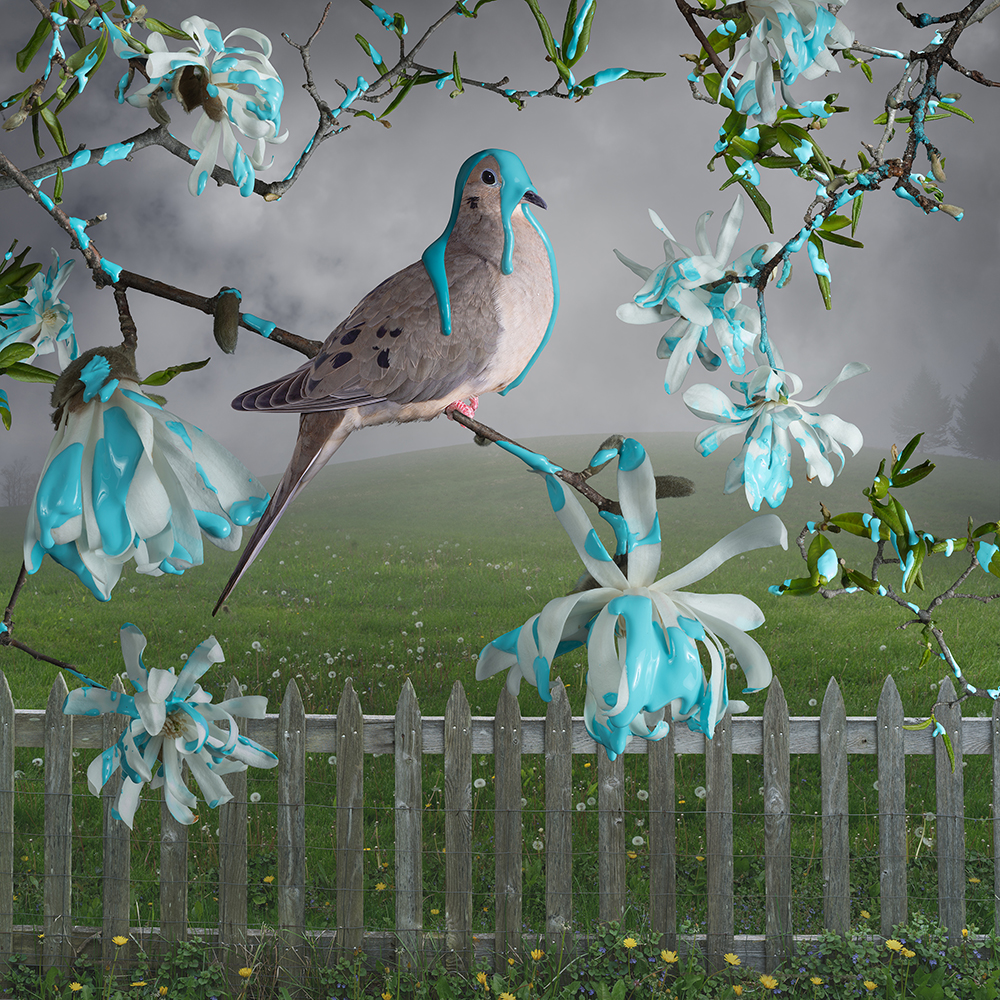 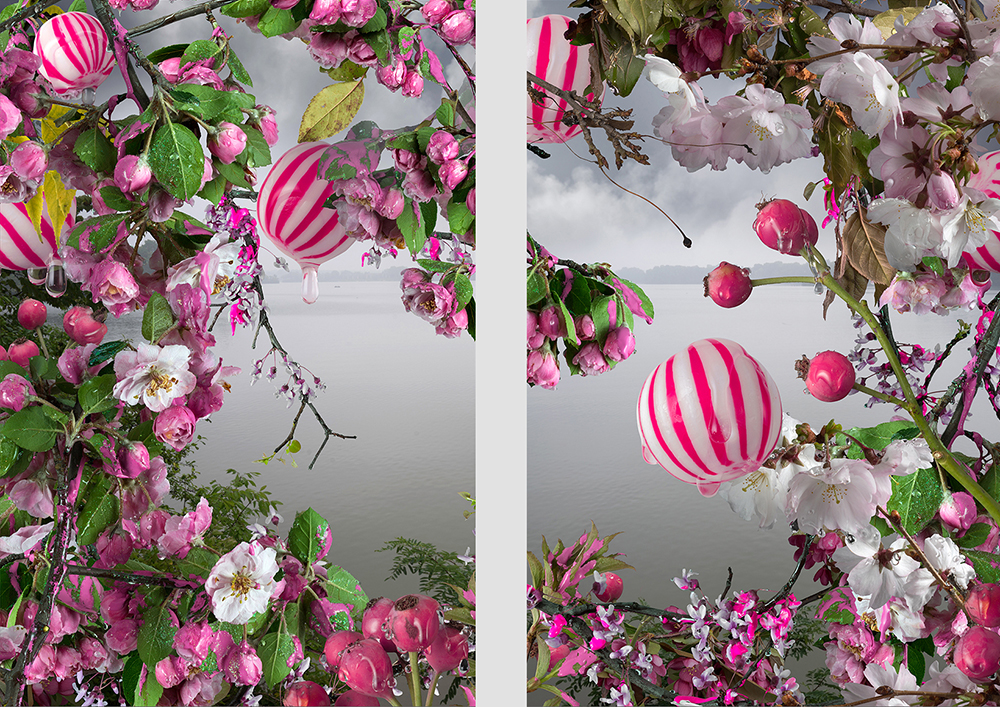 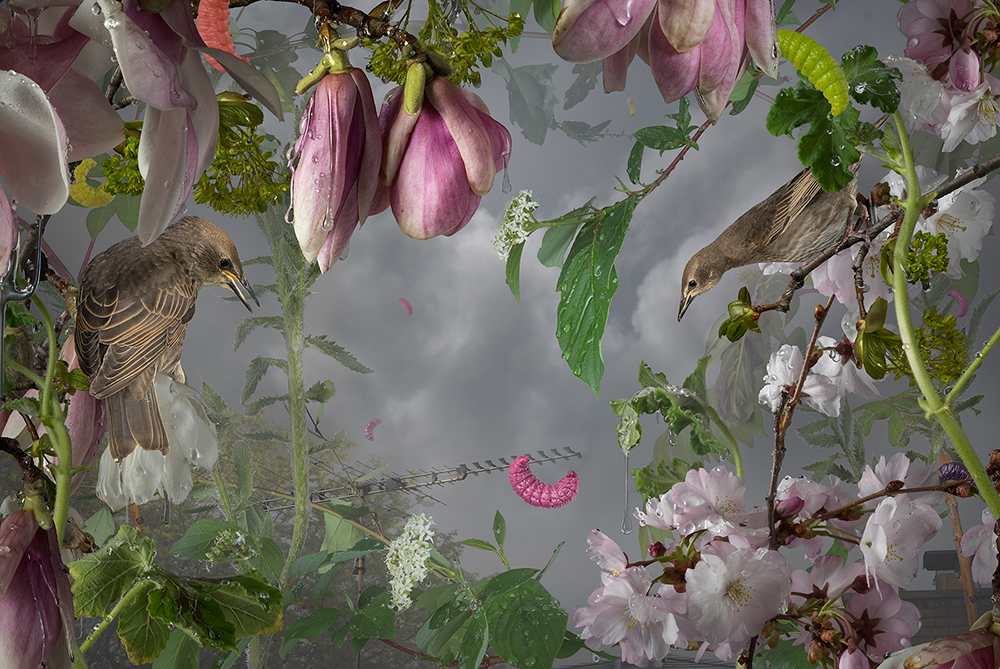 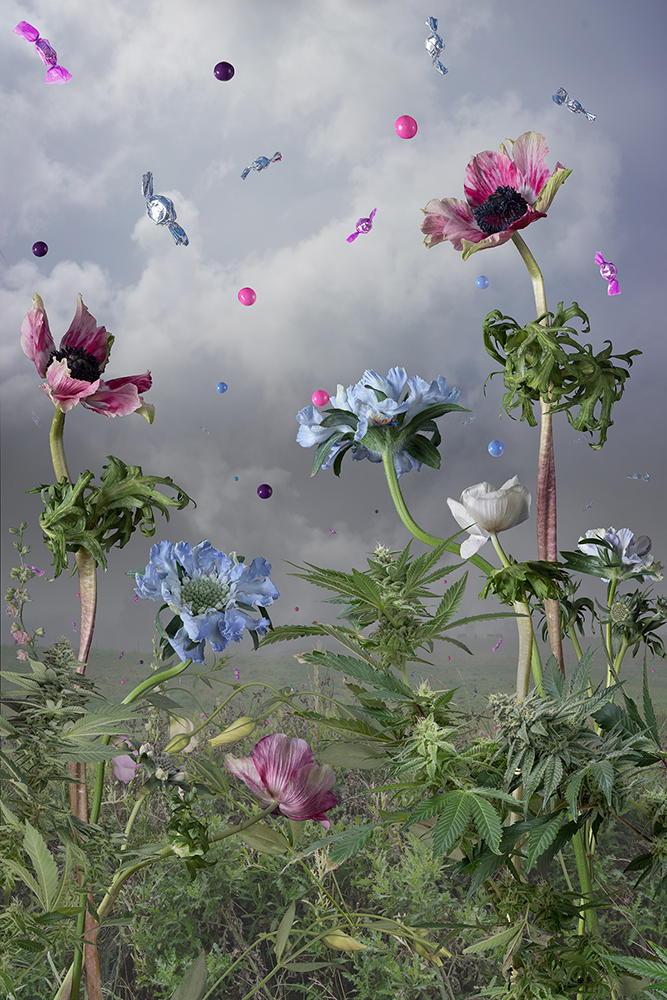 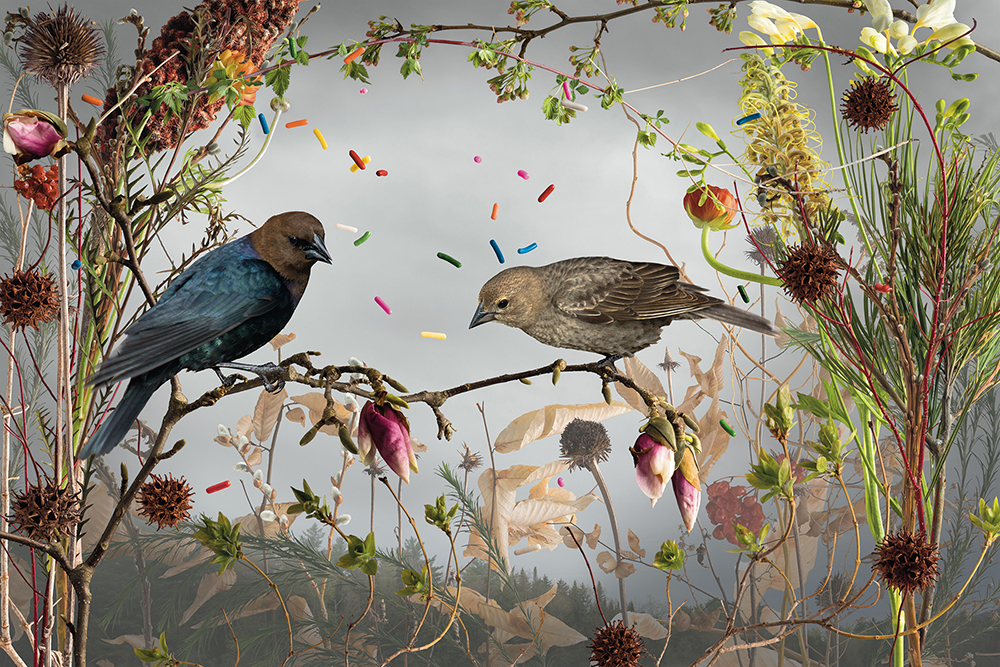 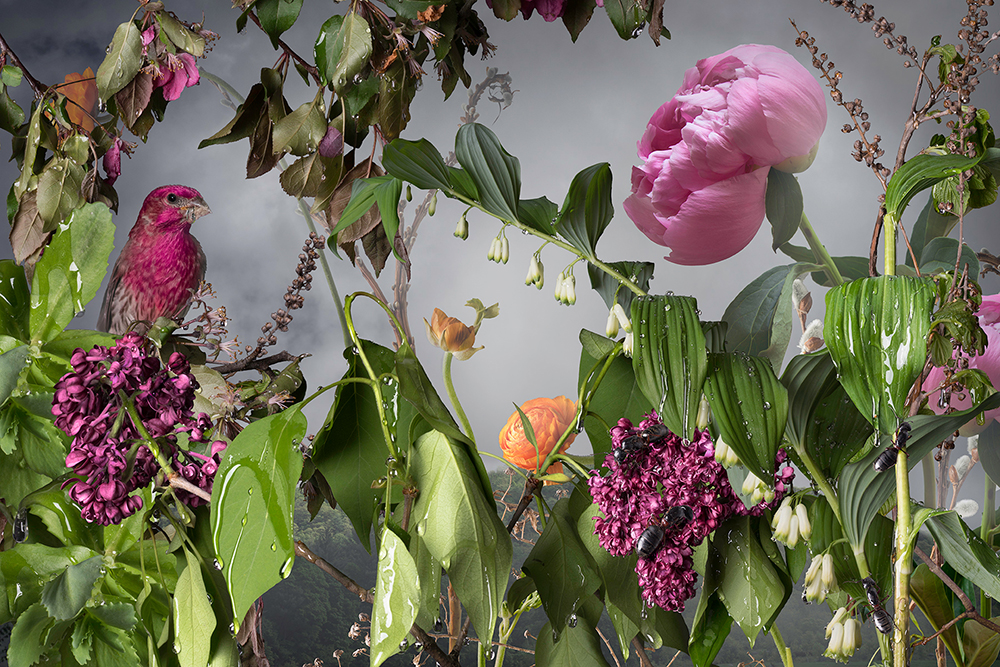 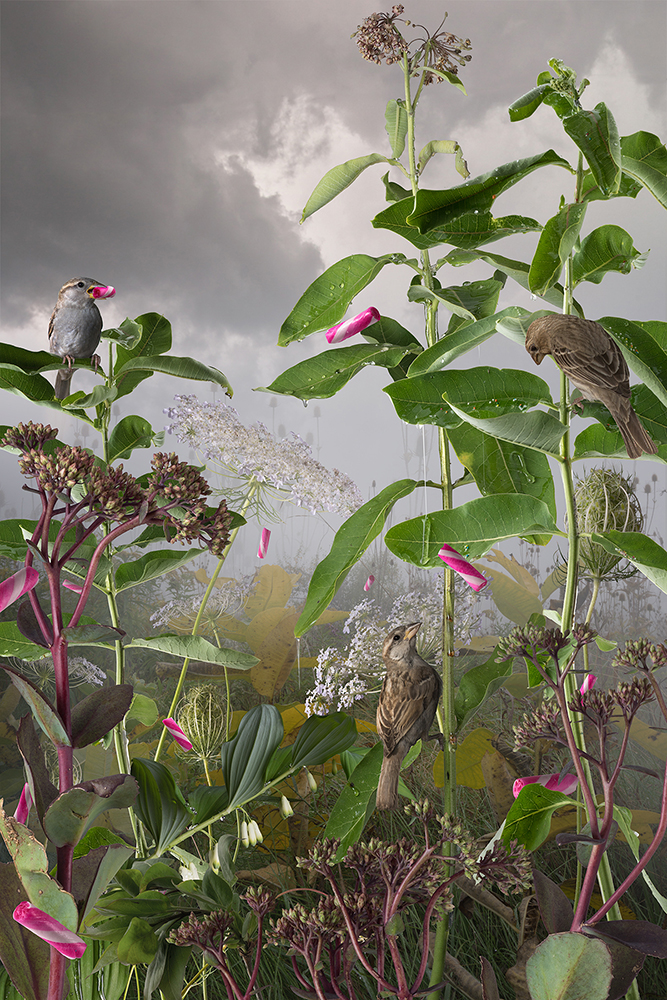