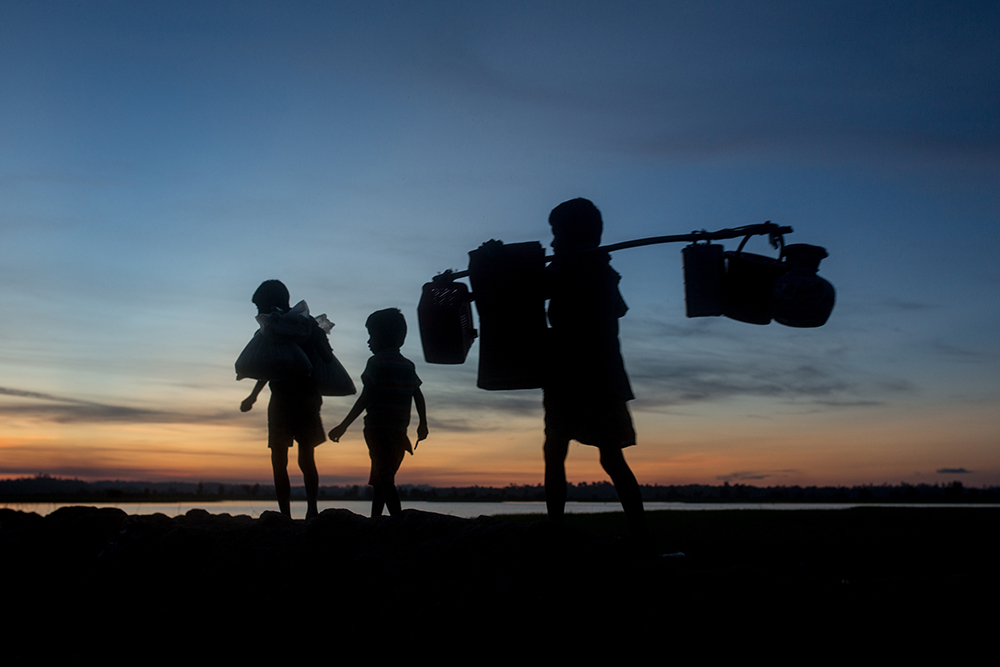 ©Thomas Nybo, Rohingya children carry all of their belongings as they flee violence in their burned village in Myanmar and travel to refugee camps in Bangladesh. They say soldiers in Myanmar attacked their families and set fire to their homes.

Since the early 1960s, the political and economic disenfranchisement of Rohingya people has been institutionalized in Myanmar law. The Rohingya have also endured discriminatory acts of violence, looting, forced labor, and extortion. The minority ethnoreligious group suffered particularly violent state-sanctioned attacks in 1978, 1991, and 2017. In the most recent of these, soldiers and state security forces began an ethnic cleansing campaign including the burning of hundreds of villages, sexual violence, separation of families, and the indiscriminate killing of thousands of Rohingya civilians, resulting in the largest and most expeditious migration of Rohingya refuges to date.

Cox’s Bazar, Bangladesh hosts one million Rohingya men, women, and children in what is now the world’s largest refugee camp. Fleeing to the relative safety of the camp is an arduous several days’ journey through forests, steep mountain ranges, and dangerous rivers. Along the way, families create makeshifts campsites and seek protection from the elements in abandoned homes. They have limited access to food. Often, they travel with injuries. They carry small children, disabled and elderly relatives, and the few belongings they were able to salvage. Since they are vulnerable to robberies, currency and jewelry are hidden, discretely sewn into clothing.

Thomas Nybo’s series, Attacks Against Rohingya, is a photo essay on survival. It captures this harrowing exodus and the quiet resilience of people who, despite enduring tremendous loss and facing uncertain futures, press on, provide unyielding care for their families, and rebuild community.

Photographer and filmmaker Thomas Nybo has worked in more than 100 countries for UNICEF, The New York Times, CNN, PBS FRONTLINE/World and other clients. 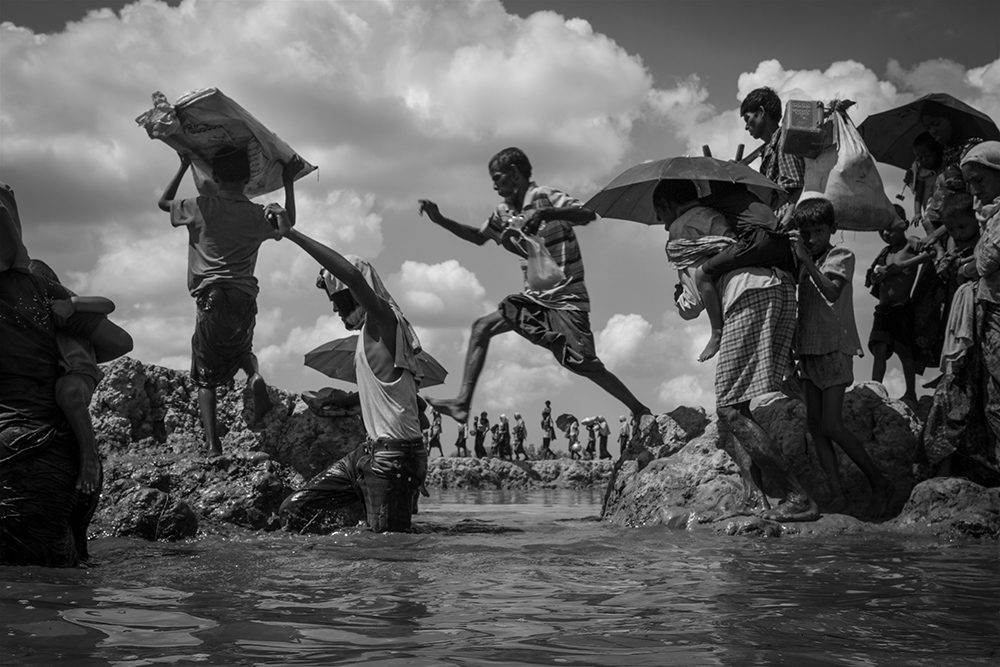 ©Thomas Nybo, Thousands of Rohingya refugees cross into Bangladesh after soldiers in Myanmar attacked their villages in what the UN human rights chief calls a “textbook example of ethnic cleansing.”

A New York Times report this month details the confession of two Myanmar soldiers who testified on video about executions, mass burials, destroyed villages and the widespread rape of Royinyga at the hands of Myanmar’s military. One soldier said his commanding officer told him, “Shoot all you see and all you hear.”

The testimony is the first time Myanmar’s military openly confessed to coordinated, large-scale attacks against the Rohingya in Myanmar. The top United Nations human rights chief calls the attacks “textbook ethnic cleansing.” More than one million Rohingya refugees are now living in refugee camps in neighboring Bangladesh after roughly 200 of their villages in Myanmar were attacked by soldiers. More than 700,000 fled in 2017. Thomas Nybo spent months in Bangladesh documenting the movement of Rohingya into what has become the world’s largest refugee camp. 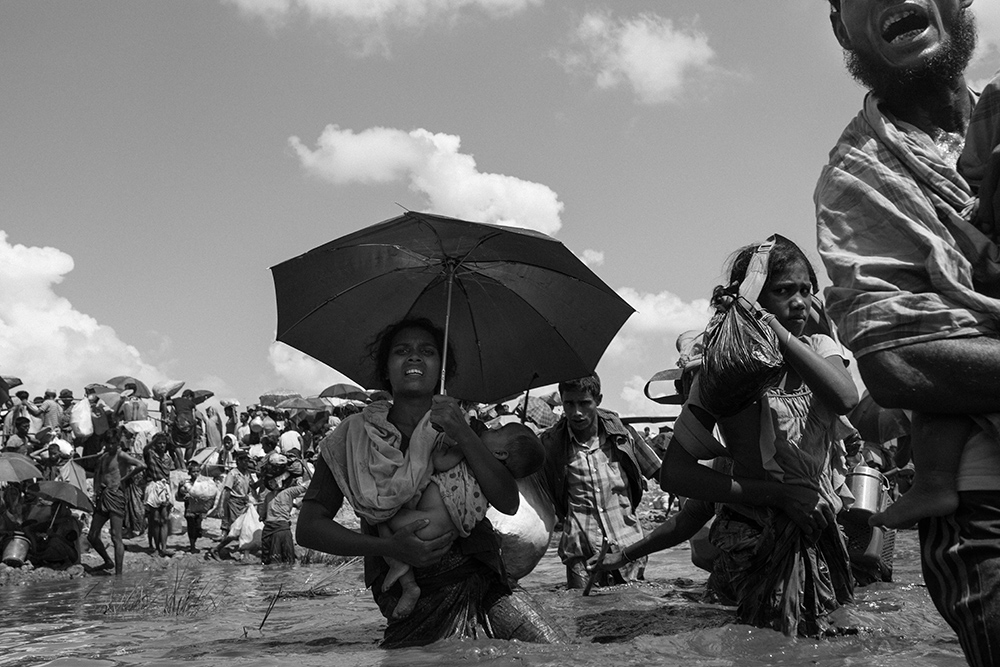 ©Thomas Nybo, Thousands of Rohingya refugees on the move, waist-deep in mud, as they cross into Bangladesh from Myanmar. One woman told me her house was torched and a soldier nailed up a sign in her village that read, “Rohingya-free area.” 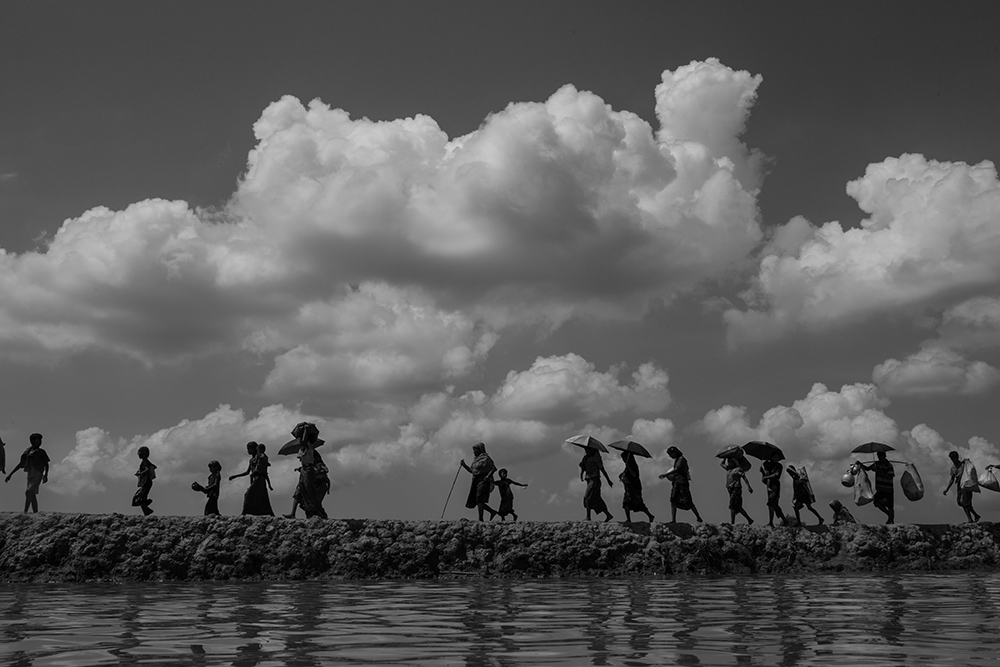 ©Thomas Nybo, More than one million Rohingya are now living in refugee camps in Bangladesh after being pushed out of Myanmar in what the United Nations calls a genocidal campaign. 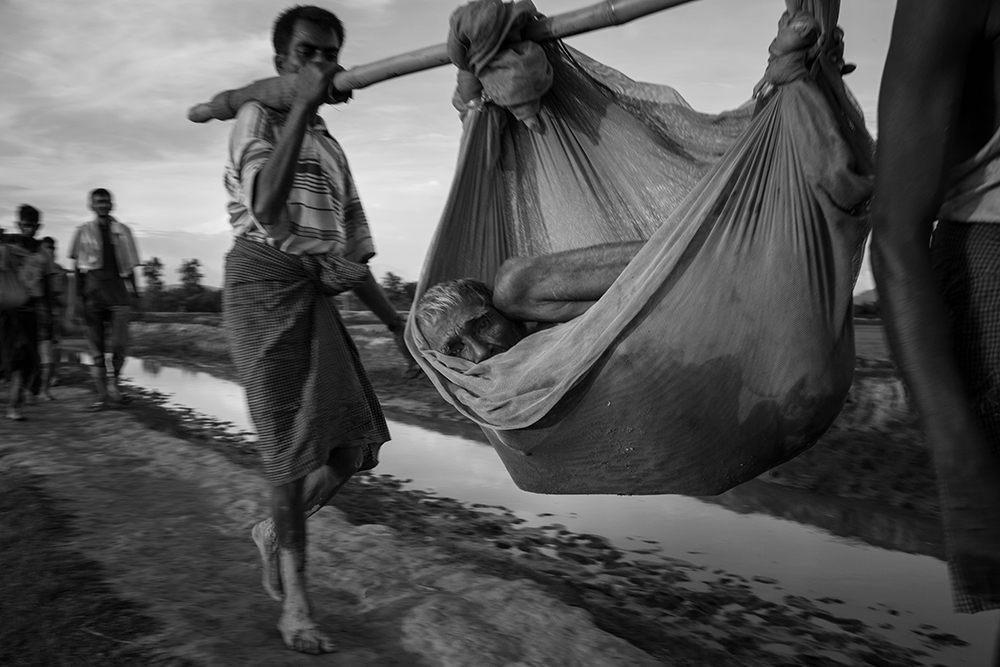 ©Thomas Nybo, Two men carry their 90-year-old grandfather from Myanmar into Bangladesh. Their Rohingya village was among roughly 200 villages burned by Burmese soldiers. 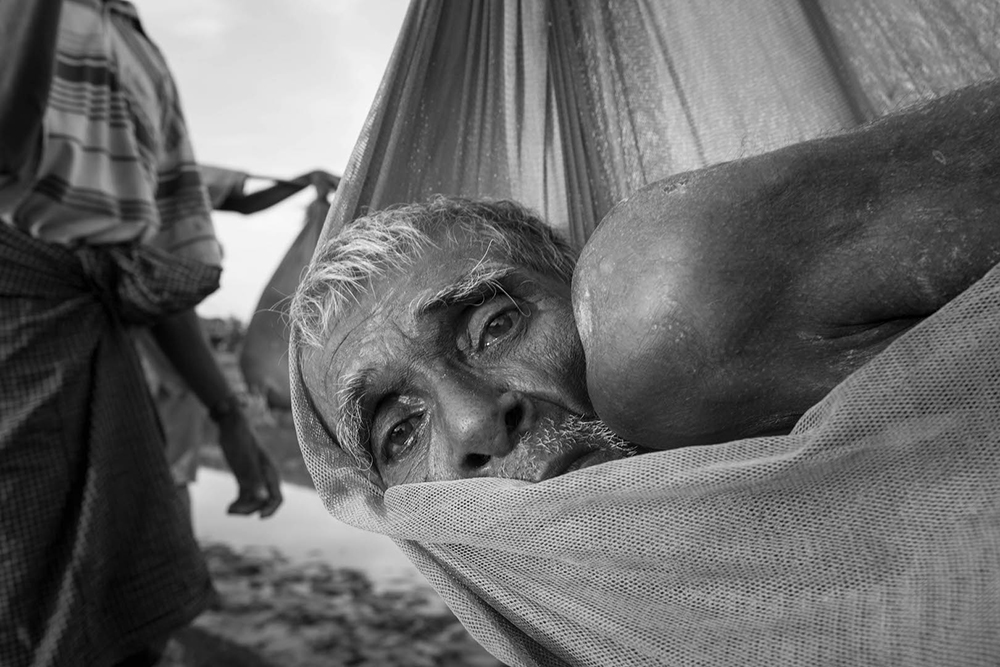 ©Thomas Nybo, A 90-year-old grandfather cries as he is carried into Bangladesh after soldiers in Myanmar burned his hut and village to the ground. 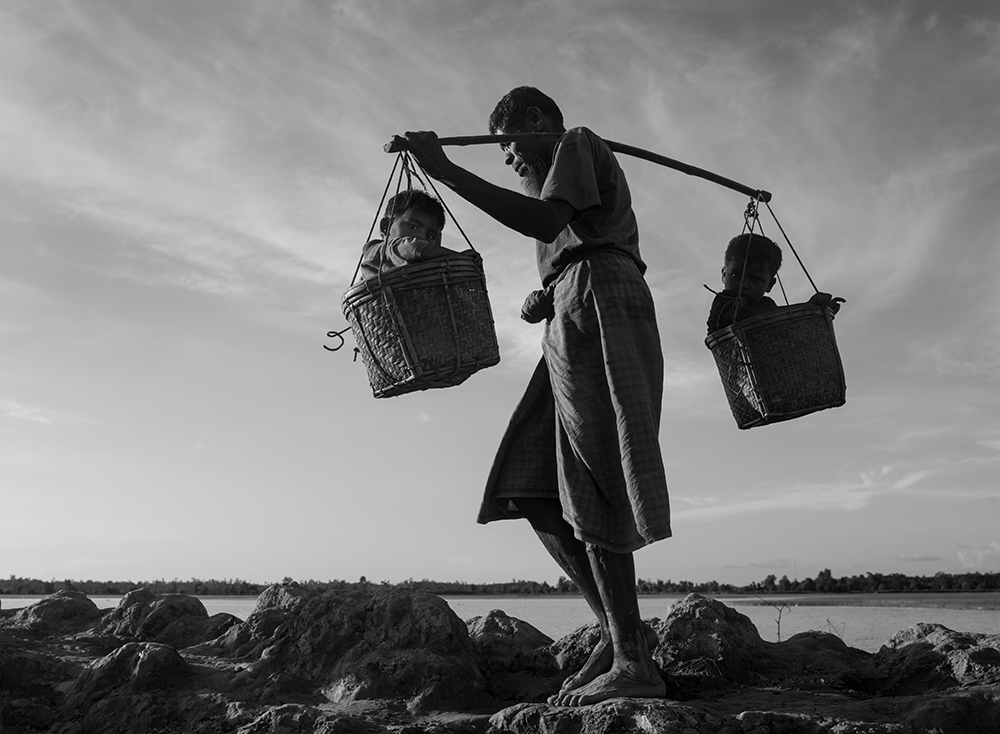 ©Thomas Nybo, A Rohingya man carries his two small boys in baskets as they make their way into Bangladesh after their village was attacked by soldiers in Myanmar. 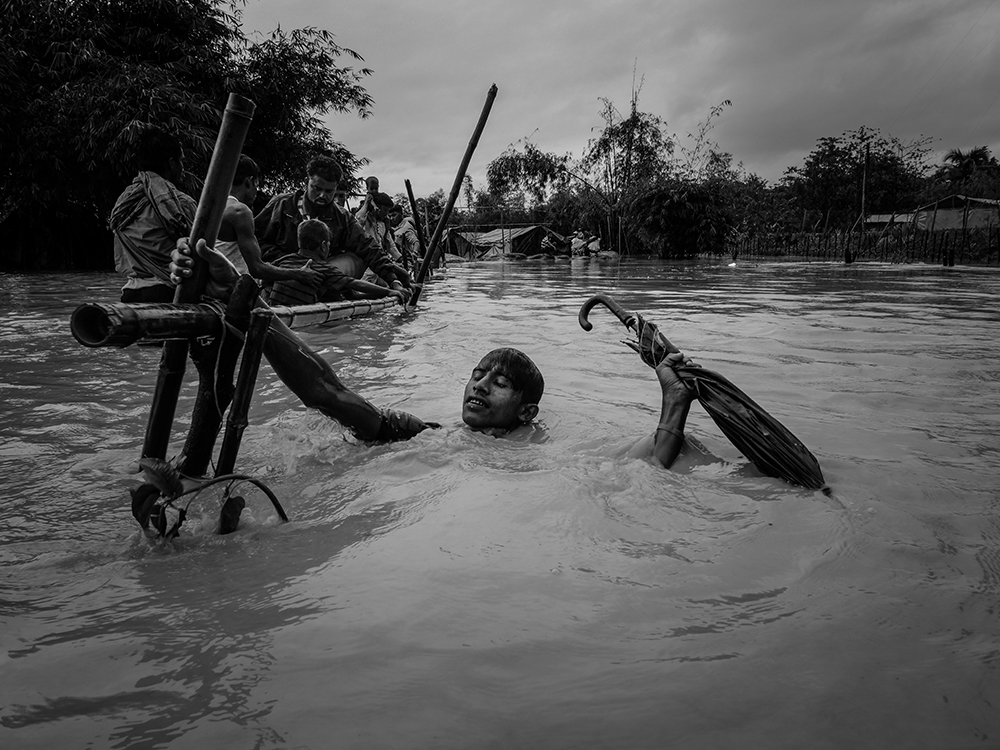 ©Thomas Nybo, A boy swims out of his flooded refugee camp in Bangladesh. Overnight rains flooded the entire camp, forcing some 400 families to stand outside their makeshift tents for hours, holding their children in their hands. When day arrived, the families began ferrying their belongings to higher ground. They are among more than one million Rohingya refugees living in Bangladesh after being targeted by soldiers in Myanmar. 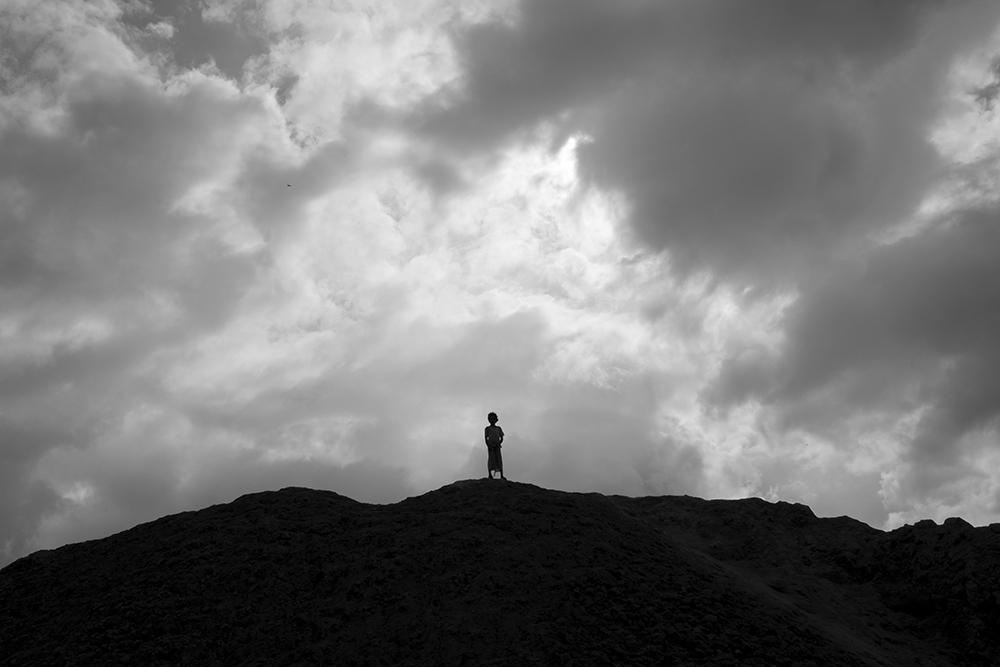 ©Thomas Nybo, On 20 June 2019, a girl stands alone on a hill in the Kutupalong refugee camp in Cox’s Bazar, Bangladesh. 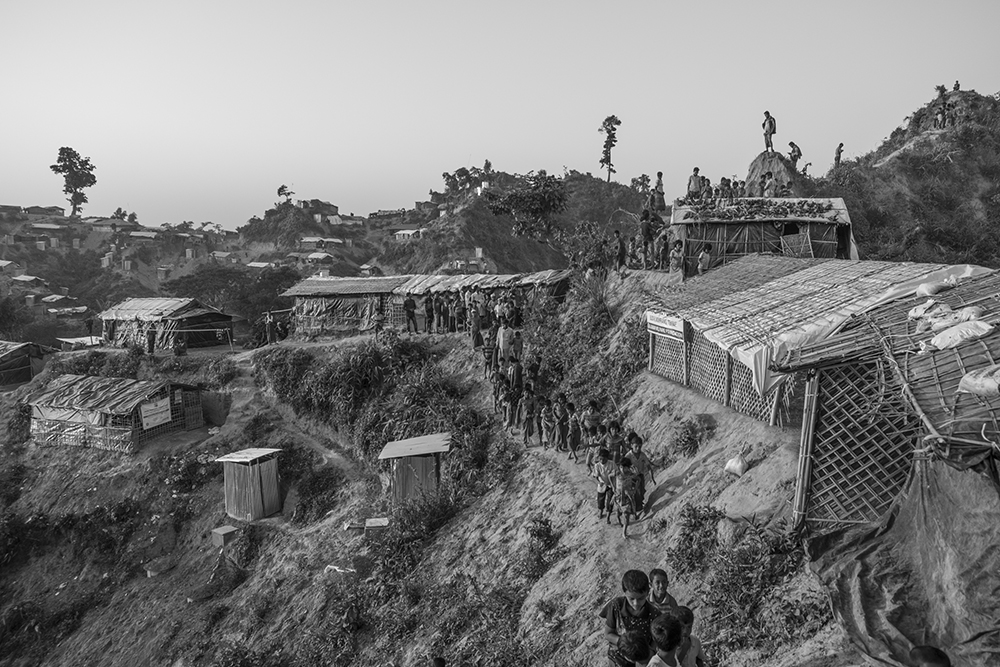 ©Thomas Nybo, Rohingya children run along the dirt cliffs above the Unchiprang refugee camp in Bangladesh. Their families all fled violence directed against them and other members of the Rohinyga ethnic group. 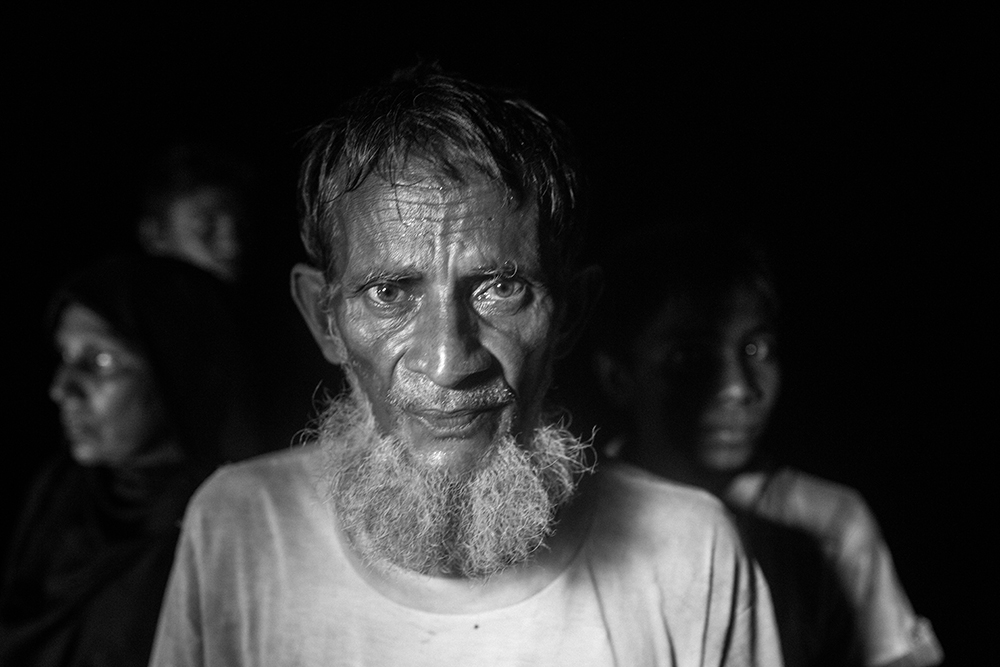 ©Thomas Nybo, Abdur Rahman, age 56, gathered his family and fled their village after the military in Myanmar destroyed his house and threatened to kill his family. They hiked three days through the jungle and camped on the beach for two more days as they waited for a boat to carry them across the Naff River to Bangladesh. This photograph was taken just minutes after Abdur and ten family members arrived in Bangladesh. There was no space in the boat for five other relatives who were left on the beach in Myanmar, waiting to make the crossing. 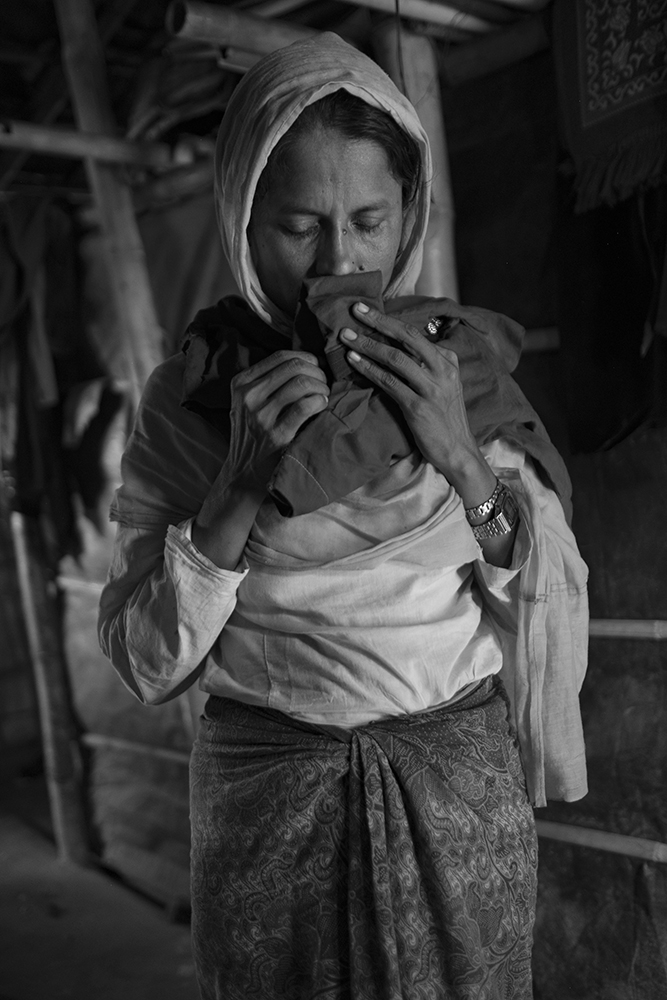 ©Thomas Nybo, On 20 June 2019, Azoma Begum, 30, holds the favorite red dress of her daughter, Asma, 12, who disappeared from the Rohingya refugee camp, and is presumed to have been kidnapped. “Three months ago, Asma went to the shop in the market in the afternoon, and she never came home,” she says. “I looked for her everywhere in the camp. I told the army, the other officials, but I have never received any information about Asma.” “I kept looking everywhere,” she says. “I think somebody took her away.” She often holds Asma’s favorite red dress. “When I smell her dress, I remember everything about Asma. I will never wash her clothes.” She lives in a bamboo-and-plastic shelter in the middle of the world’s largest refugee camp. Her husband was killed by soldiers in Myanmar in 2017. She is raising Asma’s two siblings, ages 8 and 12, by herself. “At first, her siblings cried all the time,” she says. “Will I see her again? Is she coming home? But now they don’t cry. They are silent. But they still ask about her, they still wait for their sister to come home.” She tells a visitor about Asma. “She was always laughing — playing with her brother and sister, playing with the neighbors. She was funny. I can still hear her laughter. I dream about her — she is laughing and happy, playing.” She doesn’t have a birth certificate or an ID card for Asma, not even a single photograph. But she keeps Asma’s clothes, including the red dress. “Until my last breath, I will still smell Asma when I hold her clothes.” 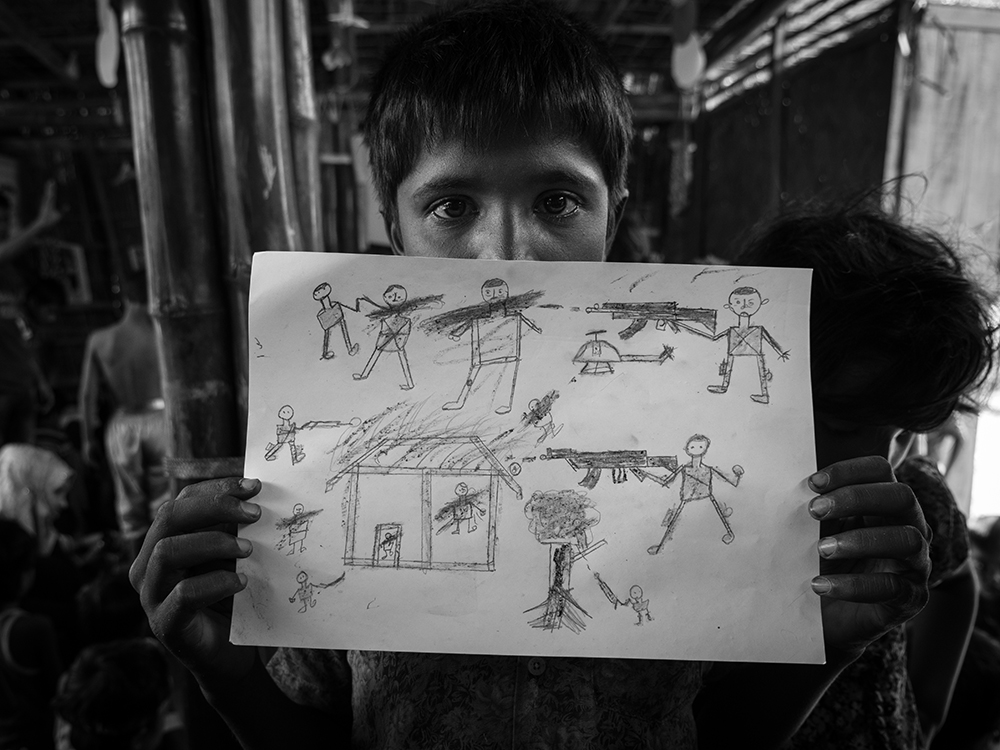 ©Thomas Nybo, A boy in a refugee camp in Bangladesh holds a drawing depicting soldiers in Myanmar attacking and burning his home and killing his neighbors. Doctors Without Borders estimates 6,700 Rohingya were violently killed in the months of August and September in 2017.

The National Center for Civil and Human Rights is a cultural institution and advocacy organization located in downtown Atlanta, Georgia. Powerful and immersive exhibits tell the story of the American Civil Rights Movement and connect this history to modern struggles for human rights around the world. The National Center for Civil and Human Rights has the distinction of being one of the only places to permanently display the papers and artifacts of Dr. Martin Luther King, Jr. Events, educational programs, and campaign initiatives bring together communities and prominent thought leaders on rights issues. For more information, visit civilandhumanrights.org and equaldignity.org.
Join the conversation on @ctr4chr (Twitter), @@ctr4chr (Facebook), and @@ctr4chr (Instagram).