On Collaboration: CPS Lives by Barbara Ciurej and Lindsay LochmanApril 24, 2021 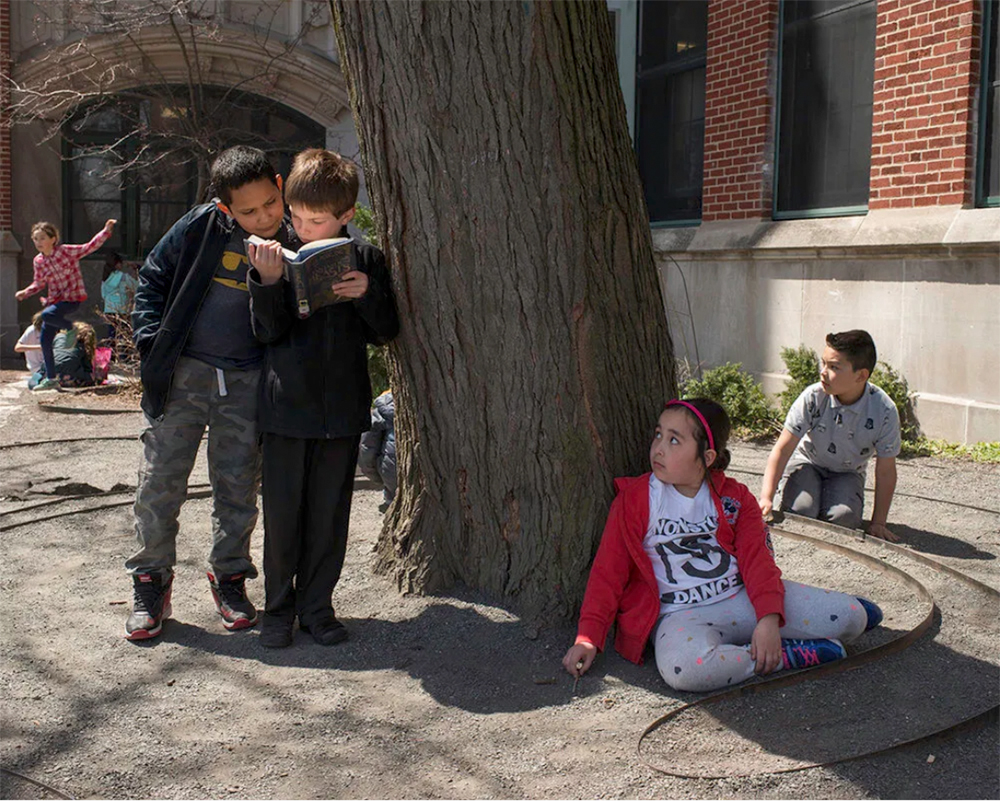 The sheer scale and complexity of the Chicago Public School system, serving over 350,000 students in more than 660 schools, renders it opaque to the general public. CPS Lives, an ambitious collaborative project, believes in the power of artists as narrators to reveal the stories of success and resilience within the schools.

In the three years since the project began, 47 artists have been engaged in producing work in photography as well as in a variety of mediums, providing a unique look into the Chicago public schools. Each artist is paired with a school to collaborate on a project for an extended period.

The resulting projects are shared on CPS Lives website, and in a multitude of venues including large-scale video projections, Instagram feeds (@CPSLives), prints, bulletin boards, installations and exhibitions. Not only do these events provide the public with a view into the life of the schools, they provided students with a sense of connection during the pandemic when the schools have been shut down.

The vibrancy and varied approaches of these projects work to counter the misrepresentations about public education in a city as politically, racially and economically diverse as Chicago. An interview with founder and executive director Suzette Bross follows. 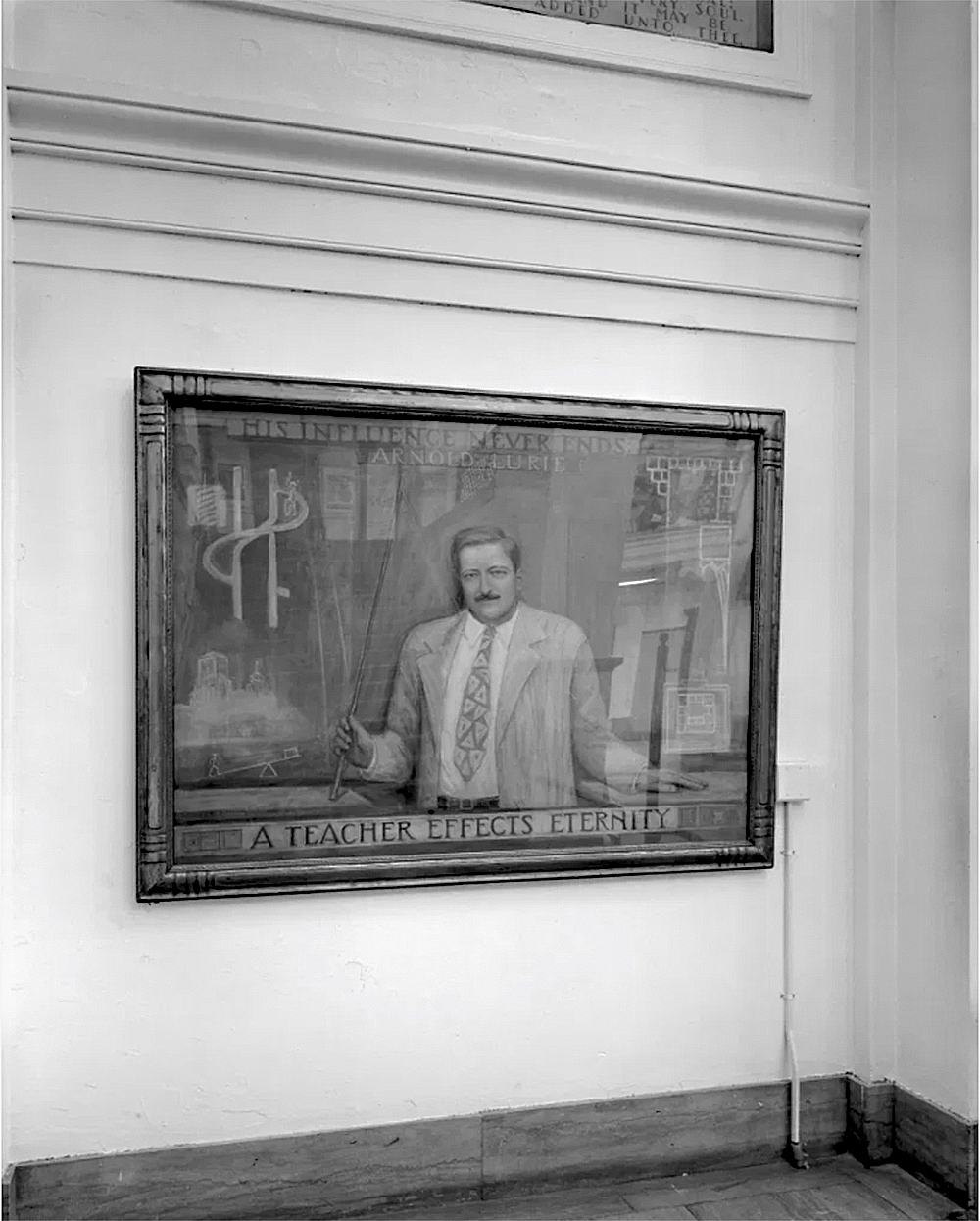 What motivated you to found this project?

A number things –‑ as a child, my siblings and I went to many different schools which gave me an early perspective about the variety of schools available. As an adult, I do a lot of non-profit work, but never in conjunction with my photography work. It eventually occurred to me that intertwining the various threads of my experiences would be a powerful way to communicate ideas. Art is a powerful and creative communication tool.

I am motivated by the idea that it is core principal of our democracy that children have the right to receive a formal education. This basic right gets lost in the various fights over educational policy and the muckraking tendencies of media. The general public predominately sees negative stories about public education which leads to the perception that public education is broken. This negative perception holds sway in Chicago when, in fact, the opposite is true. This is evident in the fact that during the last 15-20 years, graduation rates in CPS high schools have risen from 50 % to over 85%. The Gates foundation has said if you need to turn around your public school system, look at the Chicago Public School system.

CPS is often seen as a monolith when it is in fact a school district filled with thousands of unique experiences, programs and curriculums, each serving its communities and neighborhoods in different ways.  As an artist myself, I am aware of the of the ‘outside the box’ thinking that is normal for creatives, and how we are able to capture the nuances of the third largest school district in the nation in a way that has never been seen before. CPS Lives collaborates with artists to share these untold stories of schools all over the city. 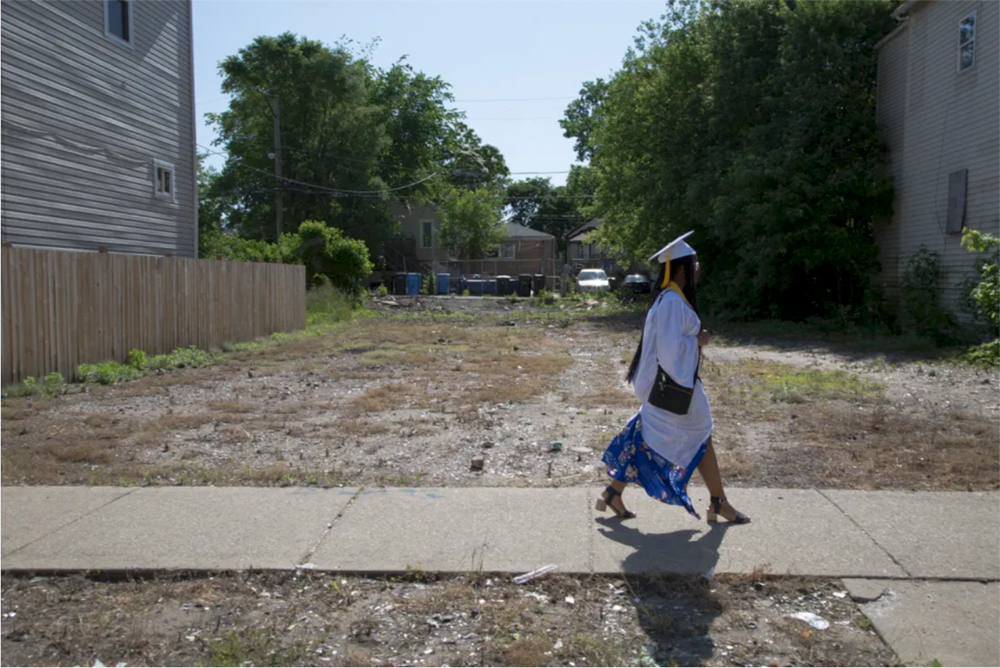 47 artists in 62 schools across 35 neighborhoods over 3 years! What does it take to produce a project like this and who did you have to enlist to accomplish it?

It still amazes me what we were able to accomplish in such a short time. It was exhilarating but required an ‘all hands on deck’ mentality for several years. The charitable and artistic communities in Chicago were very generous with their time and talent. Many people in both communities were excited to help bring this unique organization to life.

Our organization takes pride in the relationships we have developed over the years with the principals, teachers, and staff of public schools all across the city. In order to create successful projects between each artist and school, we make sure to carefully pair the two in a thoughtful manner that is takes into consideration the school’s needs as well as the artists’ skills and interests. CPS Lives is headed by myself as well as two artistic directors and a dedicated board. Though our team is small we have been able to accomplish so much due to the passion and dedication we have for the arts and education!

What do you see as the culmination of the project and what impact do you hope to have?

When I first started the project, I thought we could get an artist into every school, have them make work for a year with the culmination being a huge outdoor celebration of education and arts in downtown Chicago. While that hasn’t happened yet, I think that would be an amazing event for the City, and who knows may one day happen!

In the meantime, we are very excited that our project gives CPS families a platform to take pride in their education and communities through the creative storytelling of local professional artists. By seeing their schools represented in a positive light through the lens of creative professionals and collaborating with them students are able to build a foundation for high self-esteem reflected in their education. CPS Lives also strives to provide support to schools which are struggling to provide arts curriculum to its students. Our teaching artists are able to fill in the gaps where art has become a low priority, as well as show students that art is a viable field for them to pursue. This project ultimately produces more students interested in creative fields supporting the next generation of art makers while simultaneously supporting today’s artists and bringing the vision of what public education looks like to a general audience. 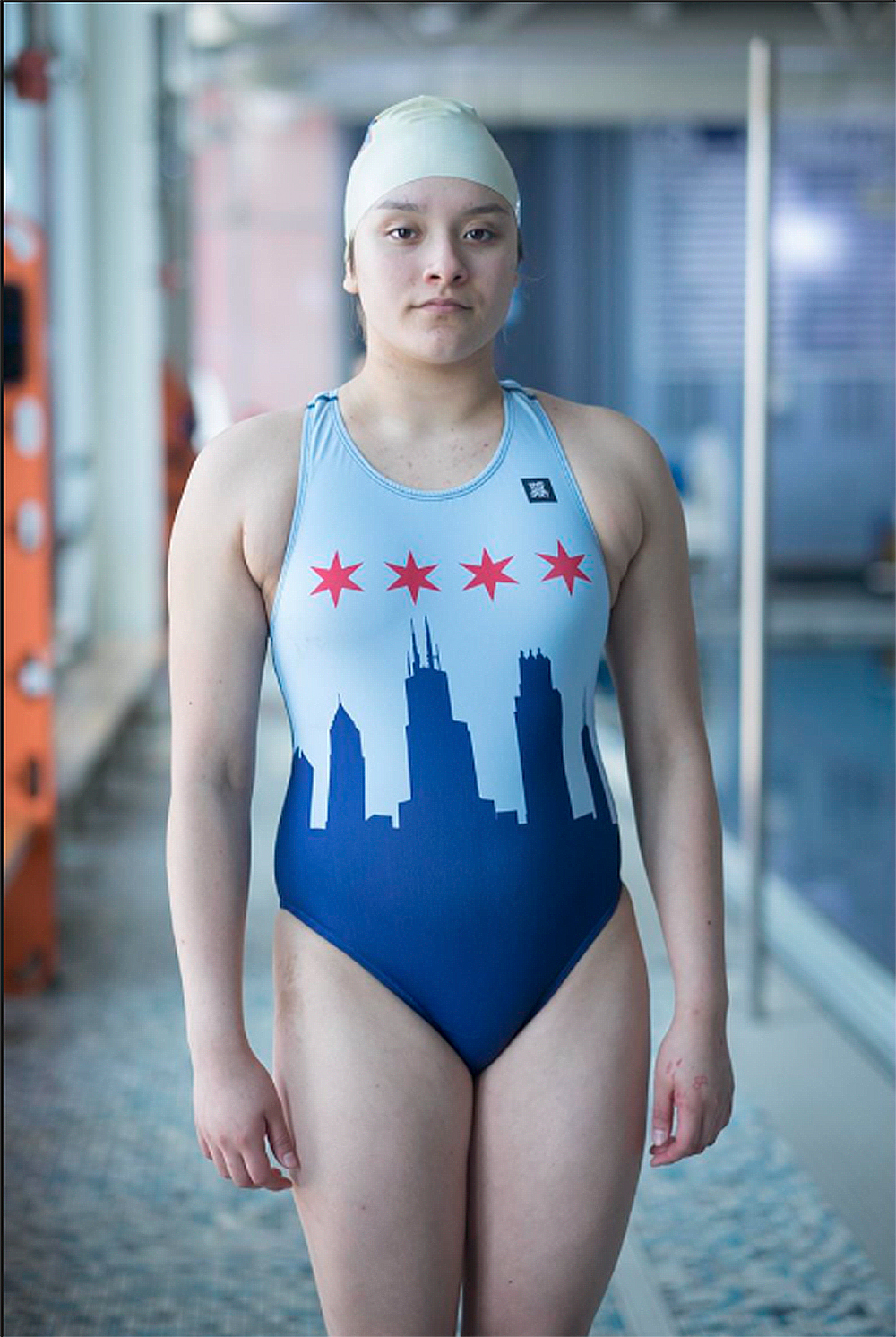 How do you position CPS Lives in the continuum of socially engaged documentary projects?

One of the things that excites me about our project is that CPS Lives is a continuation of the socially engaged group photo projects that have happened throughout the history of photography. The Farm Security Project in the 30’s and 40’s, the Family of Man show in the 50’s, the Day in the Life of America Life Magazine project and Changing Chicago project in the 80’s, and City 2000 in Chicago are examples of these projects. It is also exciting to me that our project is the first to occur since the birth of social media and the maturation of the internet. Our audiences are able to follow our artists’ stories in real time and see how they develop over the course of the school year. This allows our audience to become more actively engaged viewers and experience the positive realities of public education today. 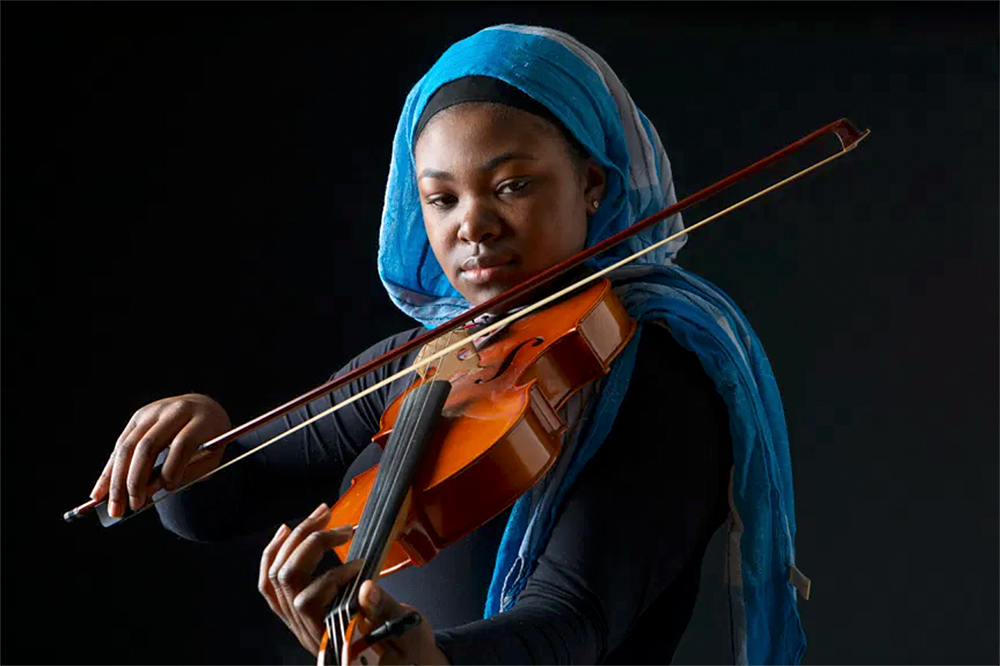 ©Janet Mesic-Mackie & Amundsen High School: Access to music and art are often viewed as non-essential and are the first programs cut by schools as a cost saving measure. Often these are the programs that can be the most impactful for many students. 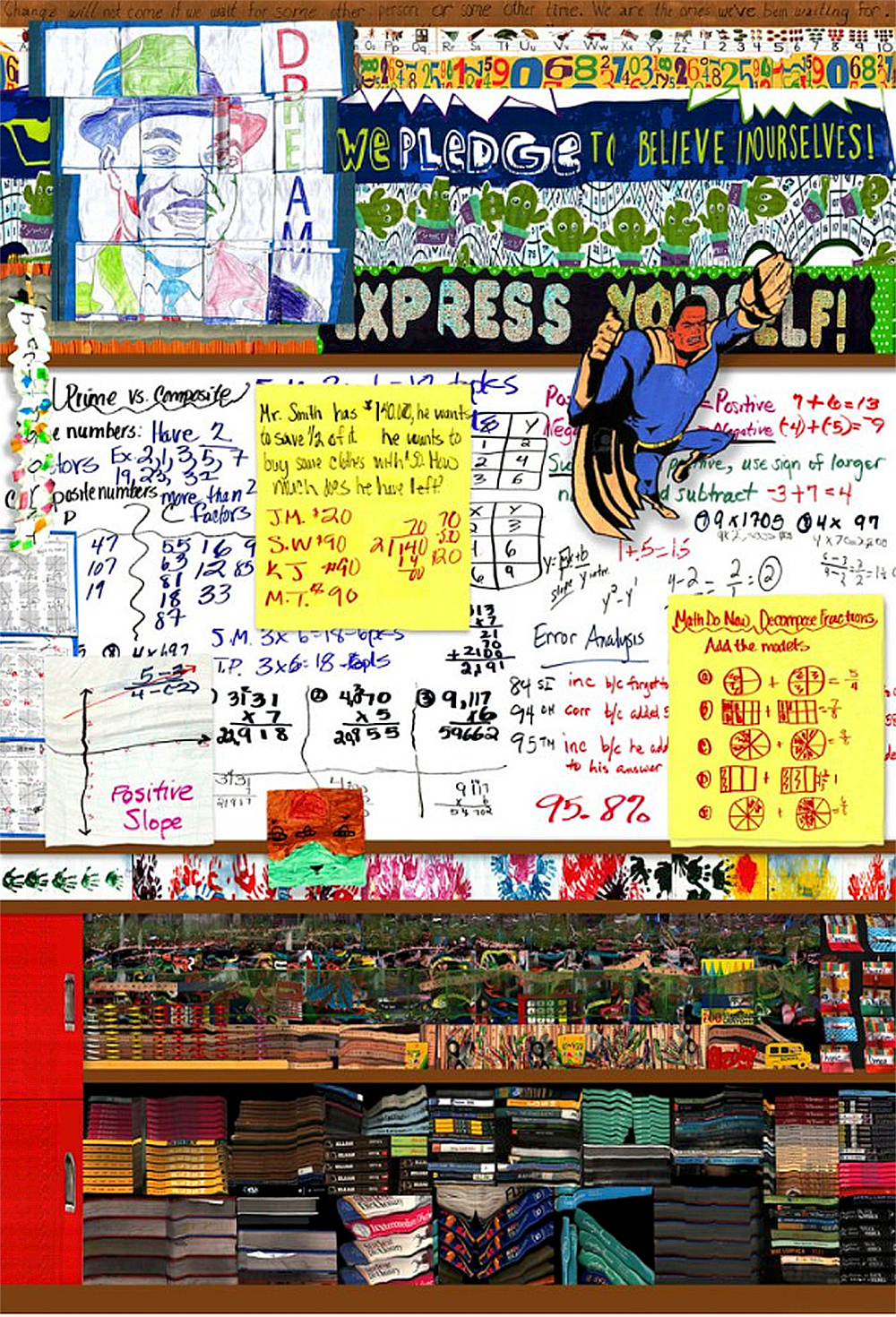 ©Jay Wolke & Dolittle Elementary School. Wolke uses a handheld scanner to record the surroundings. “I’m committed to creating community through shared, visual language and the impact it has on our common interests.” 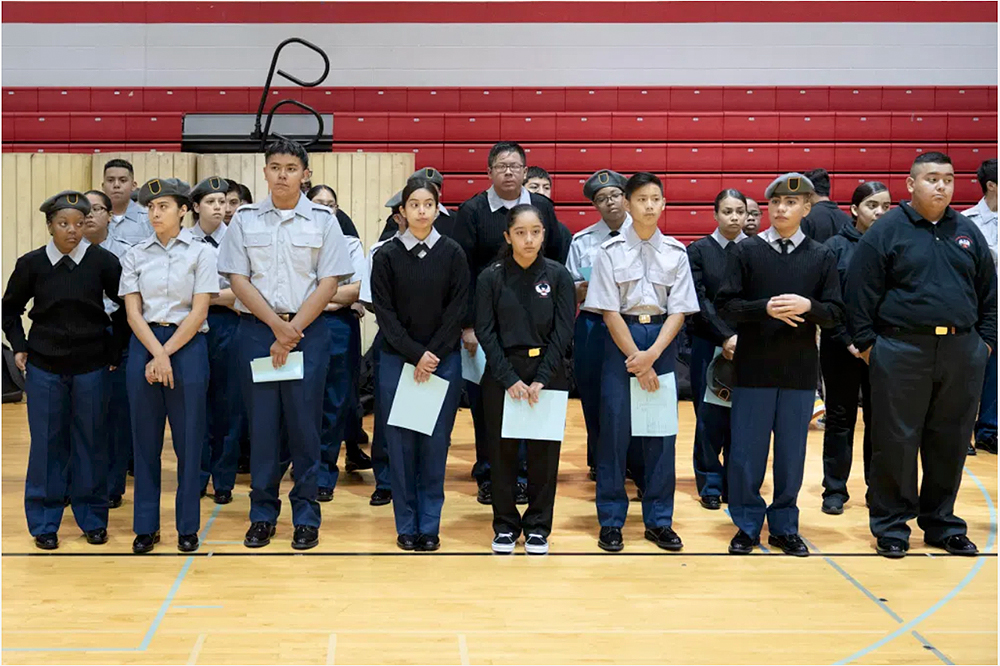 ©Jeff Phillips & Phoenix Military Academy Phillips has tackled the issues around what it means to be a student of a CPS military school His large scale video projections were recently featured on ABC news during school shut-downs: https://abc7chicago.com/military-school-high-life-chicago-phoenix-academy/10375830/ 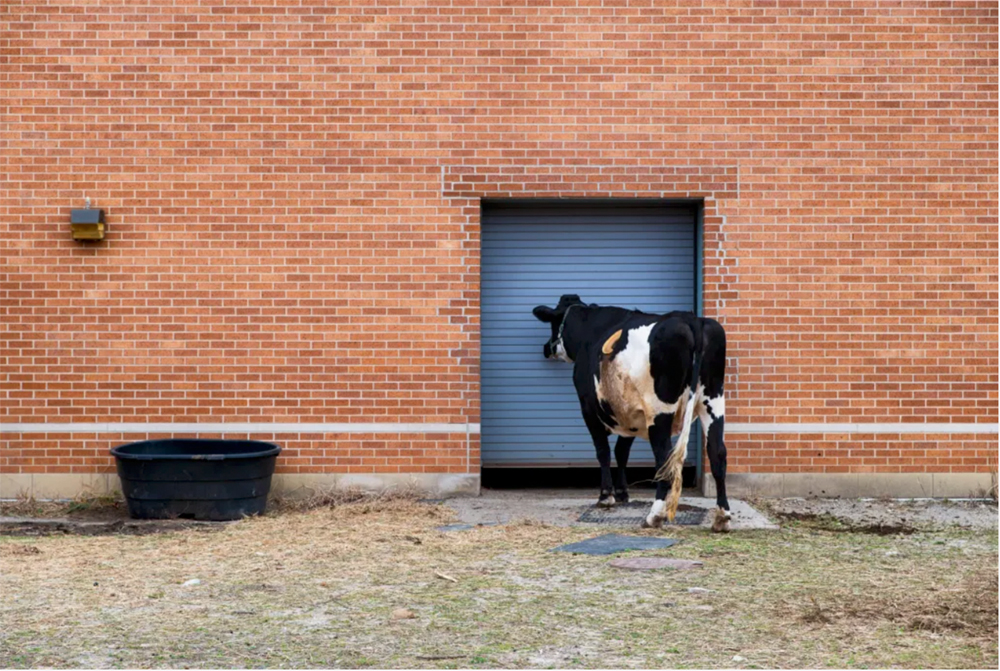 ©Andrew Miller & the Chicago High School of Agricultural Science. During the pandemic, this work was shared via CPS Lives Instagram. @CPSLives 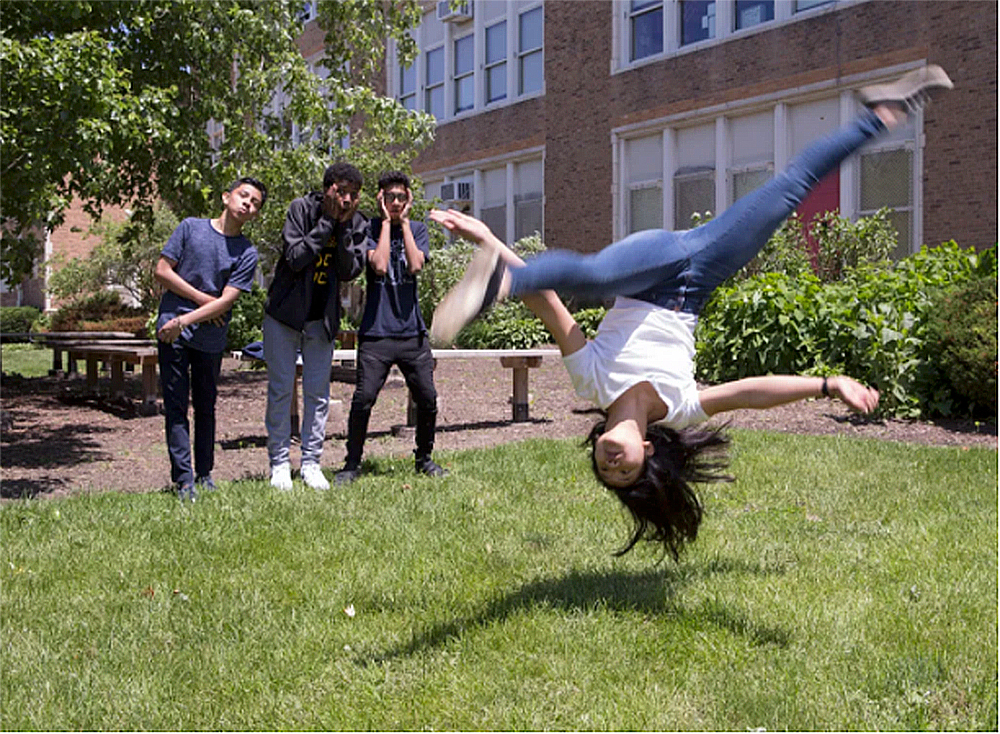 ©Jim Iska & Stone Scholastic Academy To help celebrate the milestone of leaving the only school some of the students have ever known, I chose to make portraits of graduates on their last full week at Stone. The setting and the choice of the people to be photographed with them, if any, was theirs. 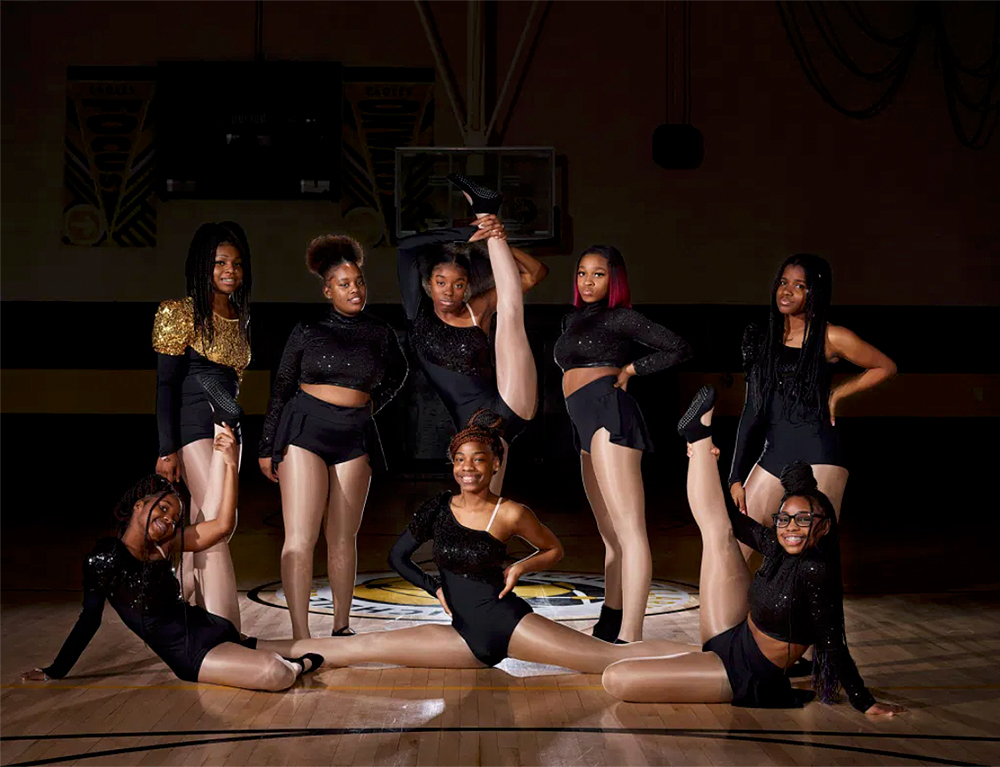 ©Marzea Abrahamik and Justin Schmitz at Michele Clark High School Working together to create images for the athletic teams and clubs, the work was originally conceived to provide the staff images for their yearbook layouts elevating the standard yearbook photograph into something more dramatic and memorable. Our intention is to to inspire positive social change by creating an archive of empowering portraits. 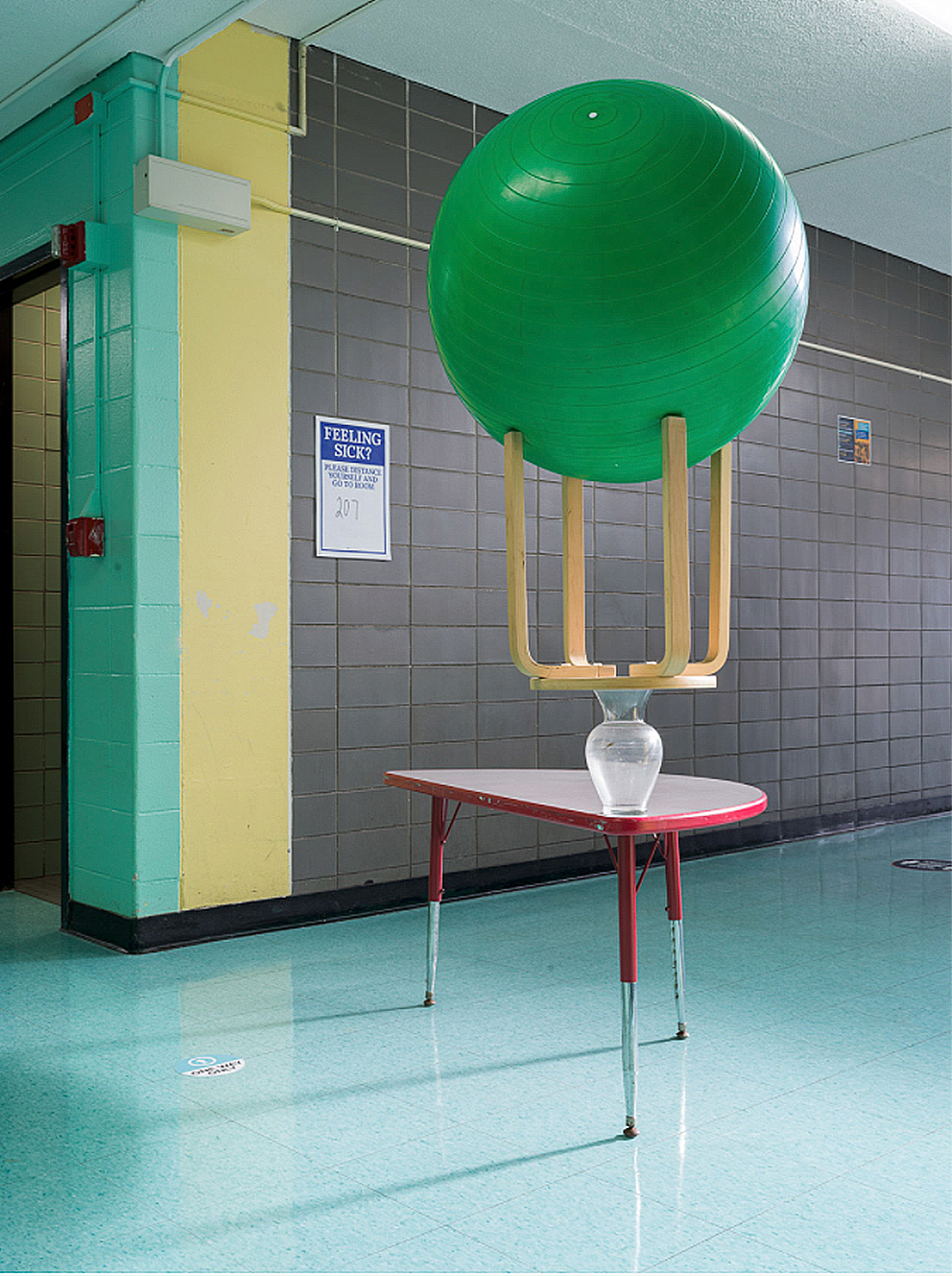 ©Matt Siber & A.N. Pritzker Elementary School From singular objects that become emphasized through photography, to temporary assemblages of multiple objects the images as much a result of my own sculptural sensibilities as they are about relating these objects to one another in unexpected ways. In series, the images create a set of relationships that speak to the physical aspects of the educational environment, while inviting the viewer to apply metaphorical connections. 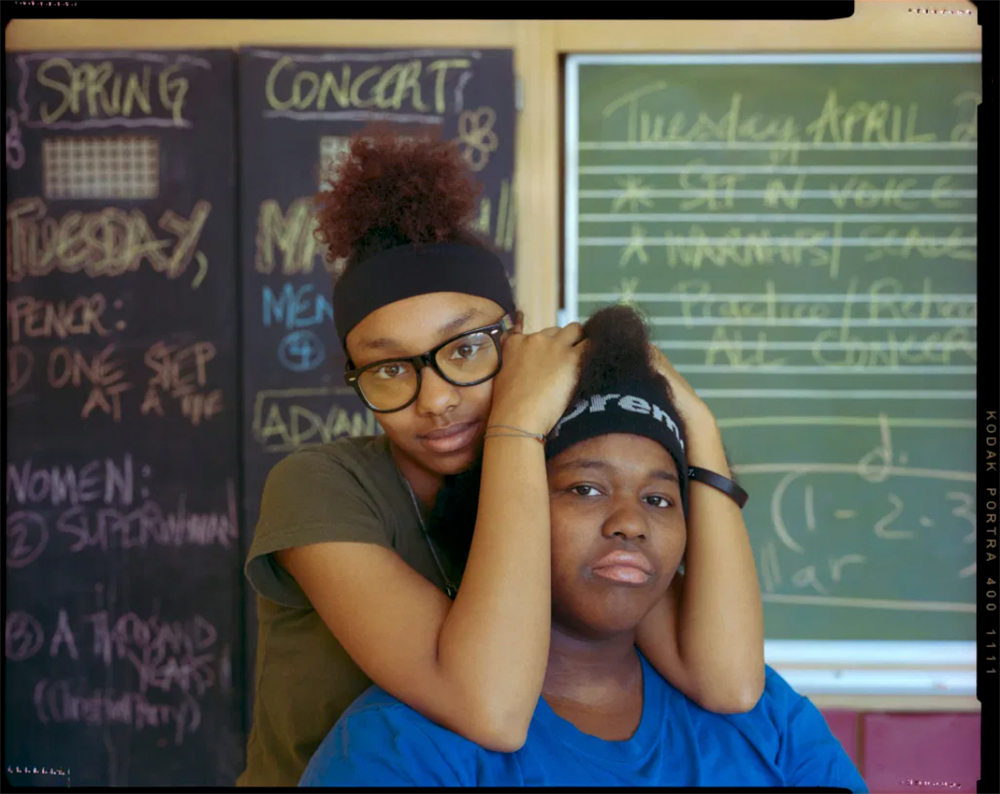 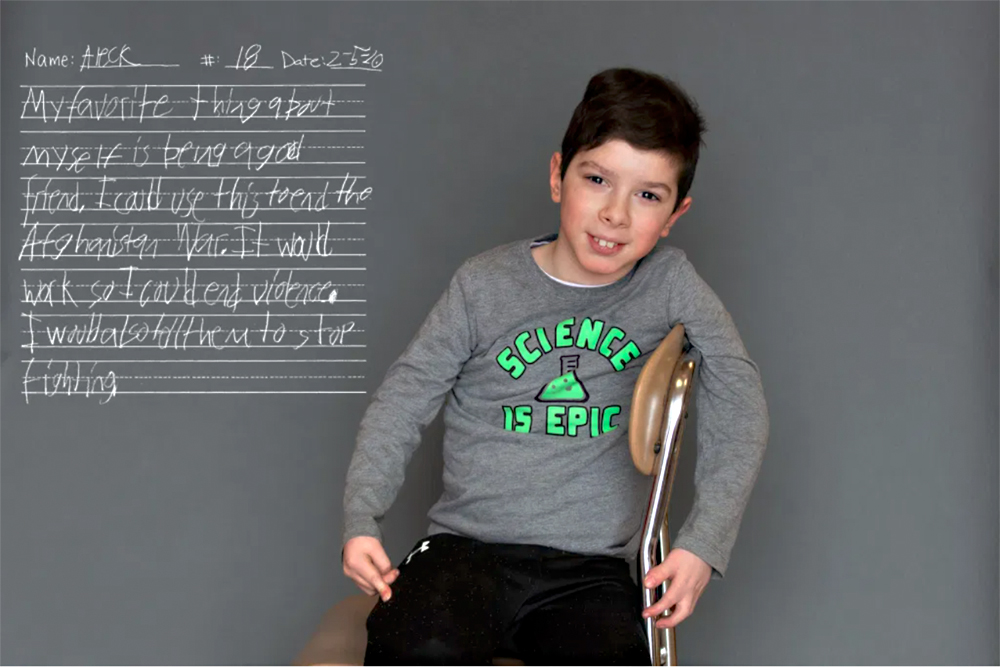 ©Lynn Renee Persin & Edison Regional Gifted Center Being an eight year old is such a unique time in a child’s life, they are mature enough to put complete ideas together but young enough to believe that anything is possible. This was the inspiration I used for this portrait project for the second grade. My goal was to create portraits that could serve as a time capsule, telling us who they are, what they love, and what they believe in by using their own words in their own handwriting. 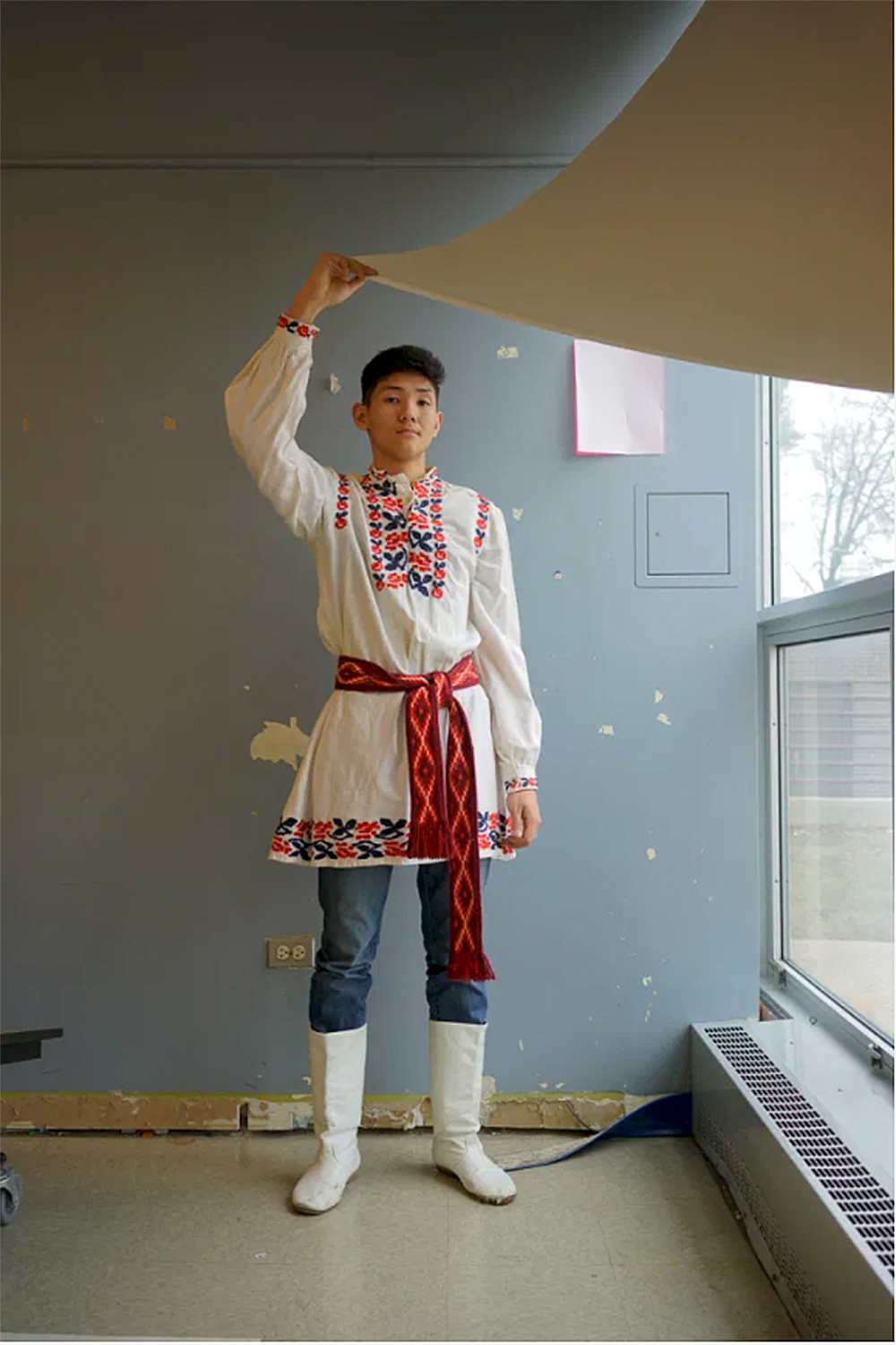 ©Sa Schloff & Stephen T. Mather, High School My project for CPS Lives is to highlight the diversity of students at Mather High School by making formal portraits of students in Ethnic clubs and other activities. I am visually contrasting the students in their respective costumes against the institutional architecture of Mather. 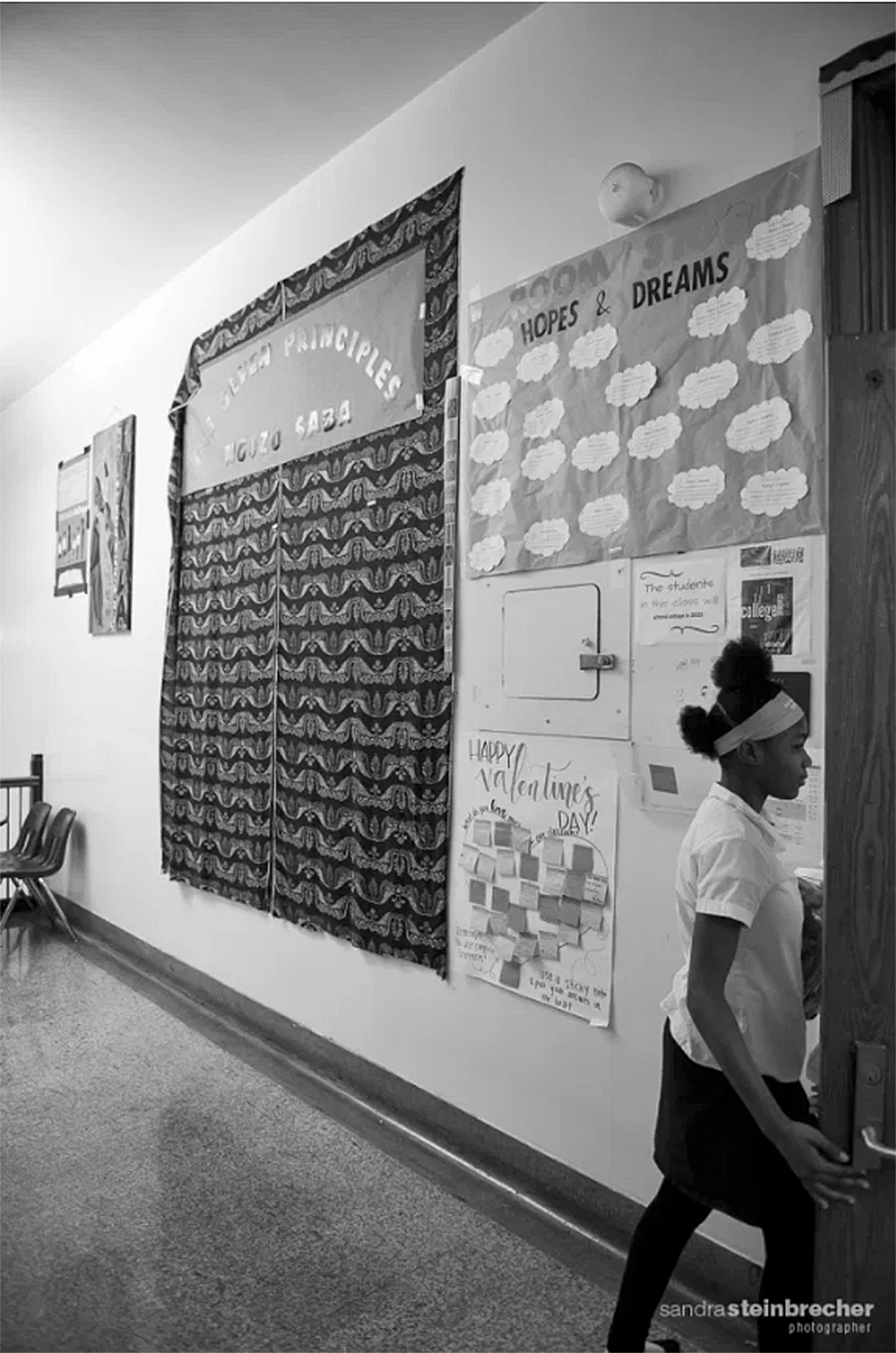 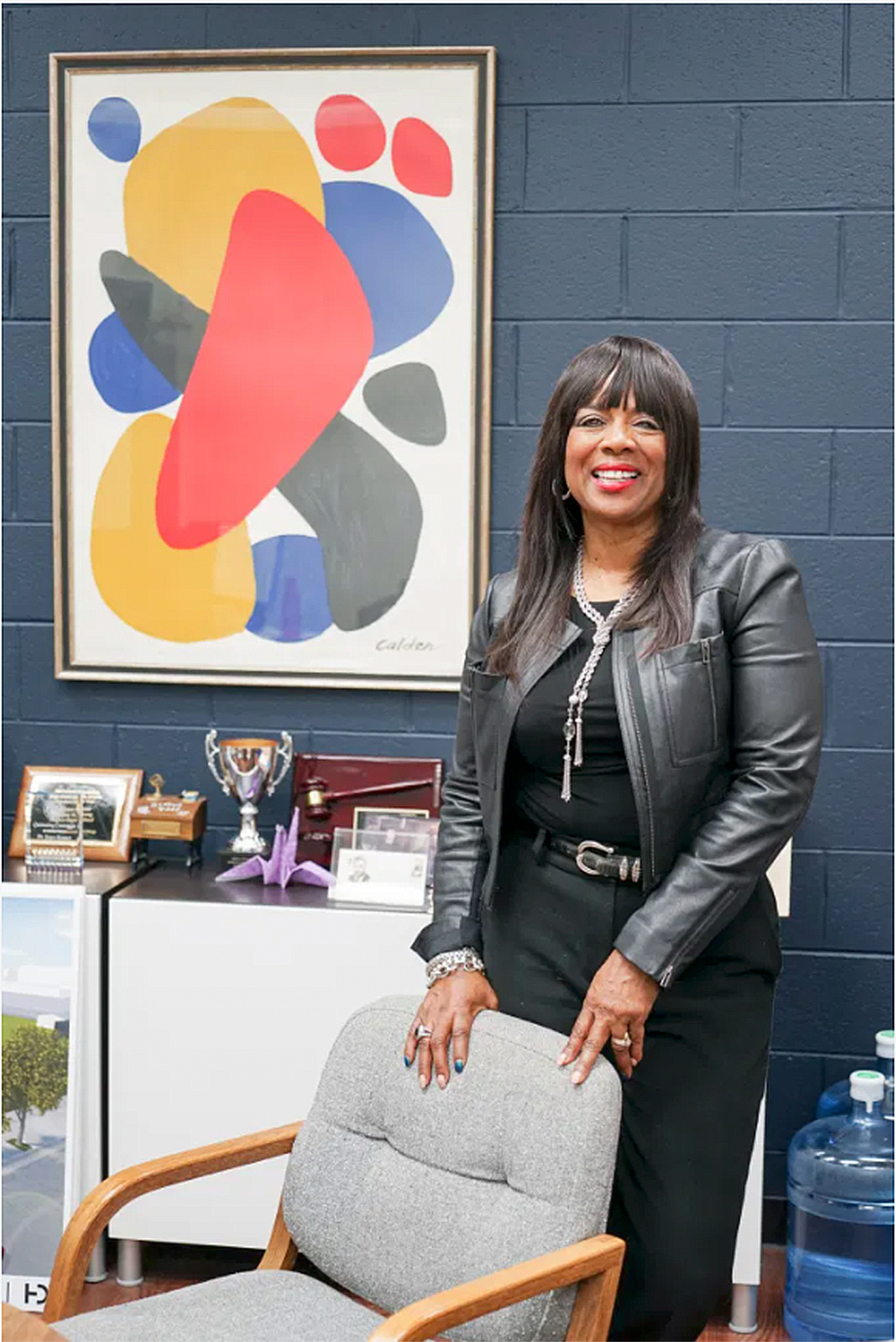 Suzzette Bross & The Principal Project, The photographic portraits of Chicago Public School principals in their offices show what the leaders of public school look like today. By looking at the Principals using traditional documentary methods, I hope to change conceptual and cultural perceptions of what a leader of a public school looks like. 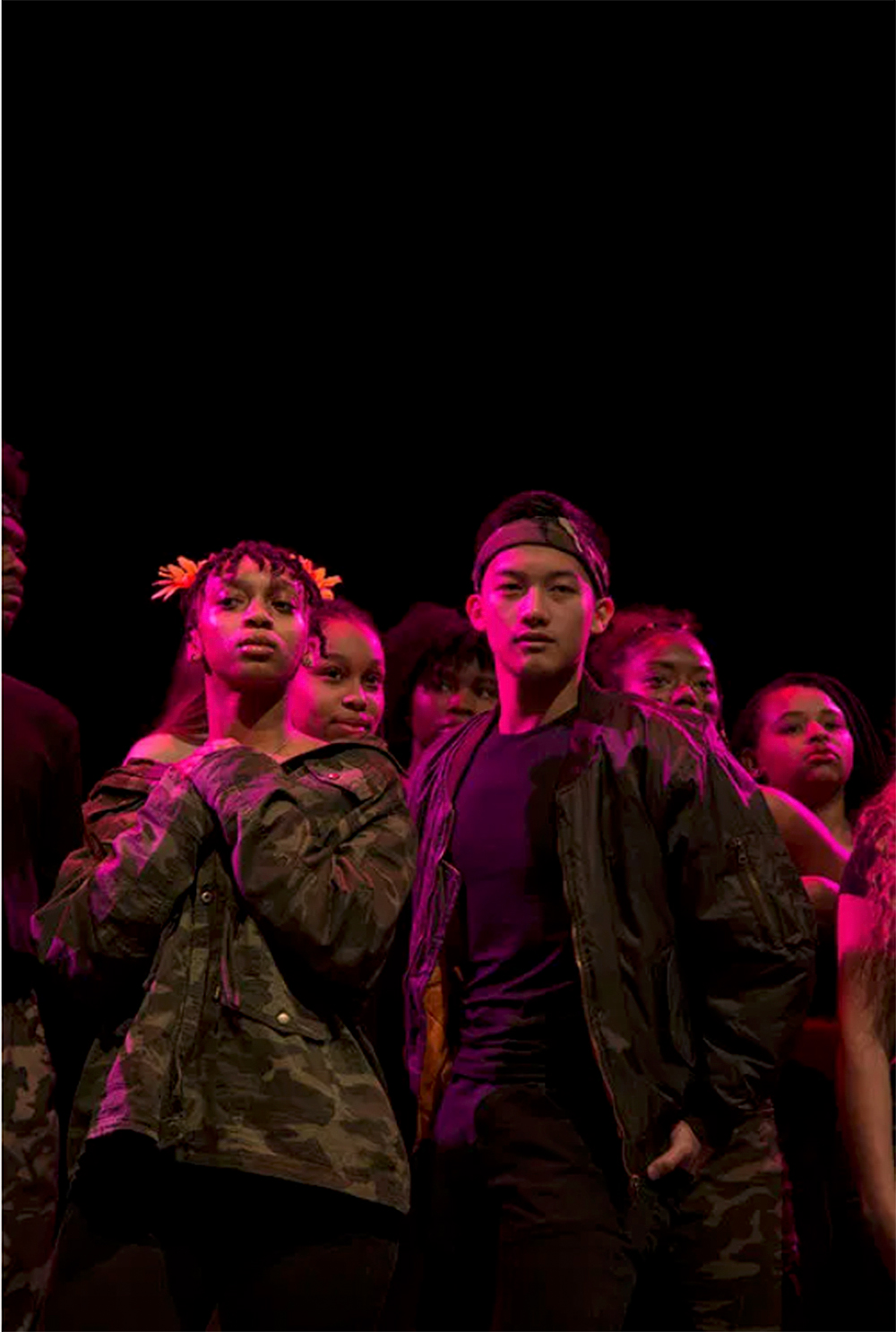 Install at BMO Harris Bank, In June 2020, students from more than 20 Chicago public schools working with CPS Lives transformed temporary plywood, used to cover BMO Harris Bank’s main branch during protests, into a work of art expressing messages of hope and unity in their “If I Could Show the World” mural project.

CPS Lives is a 501(c)(3) non-profit arts organization that pairs Chicago artists, designers, creatives, thinkers, makers, and educators with a Chicago Public School during the academic year to collaborate on a project, sharing the unique and individual story of each Chicago Public School. Each story will be celebrated and exhibited through local Chicago Public Library branches, as well as existing on the CPS Lives website as an accessible digital archive of history for students, families, community members, educators, administrators, policymakers, and the general public.

Barbara Ciurej and Lindsay Lochman have been collaborating on photographic narratives for four decades. They write On Collaboration to hightlight the myriad ways photographers incorporate collaborative strategies into their work and projects.