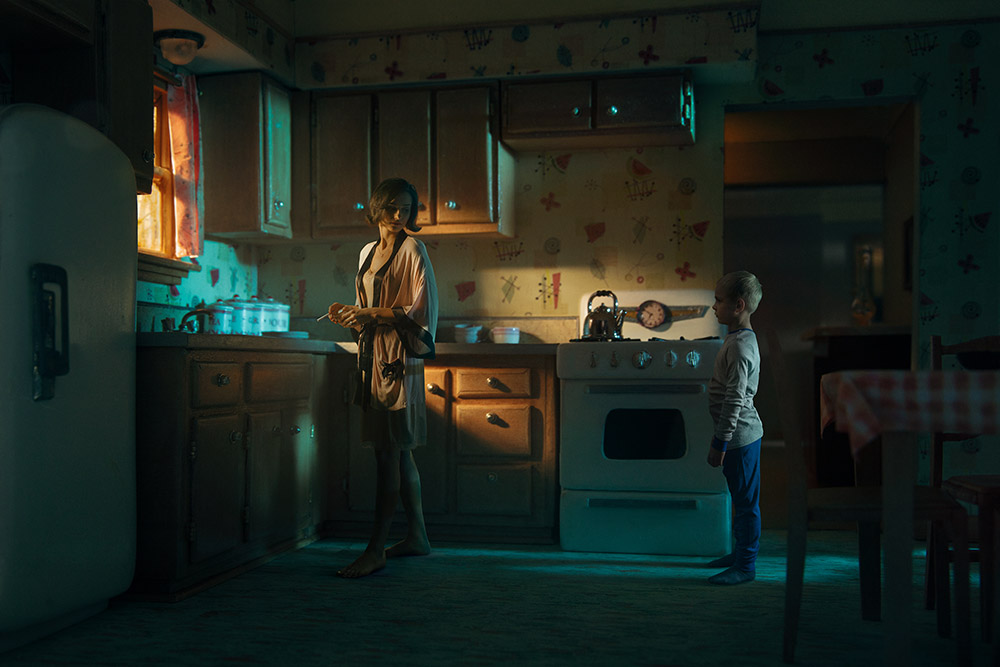 ©Richard Tuschman, Early Morning Date: 2016–2019 While my mother was exceptionally responsible, conscientious, and caring, expressing love through physical affection was, for various understandable reasons, beyond her comfort zone. This was an absence my siblings and I felt acutely as children.

The idea of time travel, more specially, the ability to revisit our growing up in sharp detail is one that many wish were possible. Going back in time might enable us to understand family dynamics that were lost on young minds or spend time with childhood friends or pets that have long since disappeared. Artist and photographer, Richard Tuschman has been creating magic over the years with his remarkable physical and digital constructions and his newest series, My Childhood Reassembled, is a personal journey into the past. As he states in the title, the project reassembles and “creates a picture that expresses both the joy and pathos of childhood, as reflected in the fluctuating and ever-changing mirror of my memory.“

Tuschman builds small dioramas that reflect the structural and sensory details of his childhood home in Ohio. He then works with actors to recreate scenes that have particular meaning to him.  My Childhood Reassembled can be seen in two concurrent online exhibitions at Klompching Gallery and photo-eye Gallery.

Richard Tuschman (b. 1956) began experimenting with digital imaging in the early 1990s, developing a style that synthesized his interests in photography, painting and assemblage. Tuschman holds a BFA from the University of Michigan in Ann Arbor, and has been exhibited widely, both in the US and internationally, including the Museum of Contemporary Art in Krakow, Poland, AIPAD in NYC, and the Photovisa Festival in Krasnodar, Russia. Tuschman’s projects have twice been selected to the Photolucida Critical Mass Top 50, he was a finalist for the New Orleans Photo Alliance Clarence John Laughlin Award in 2015 and 2016, and was named a New York Foundation for the Arts Fellow in Photography in 2016. Richard Tuschman currently lives and works in New York City. IG@richardtuschman 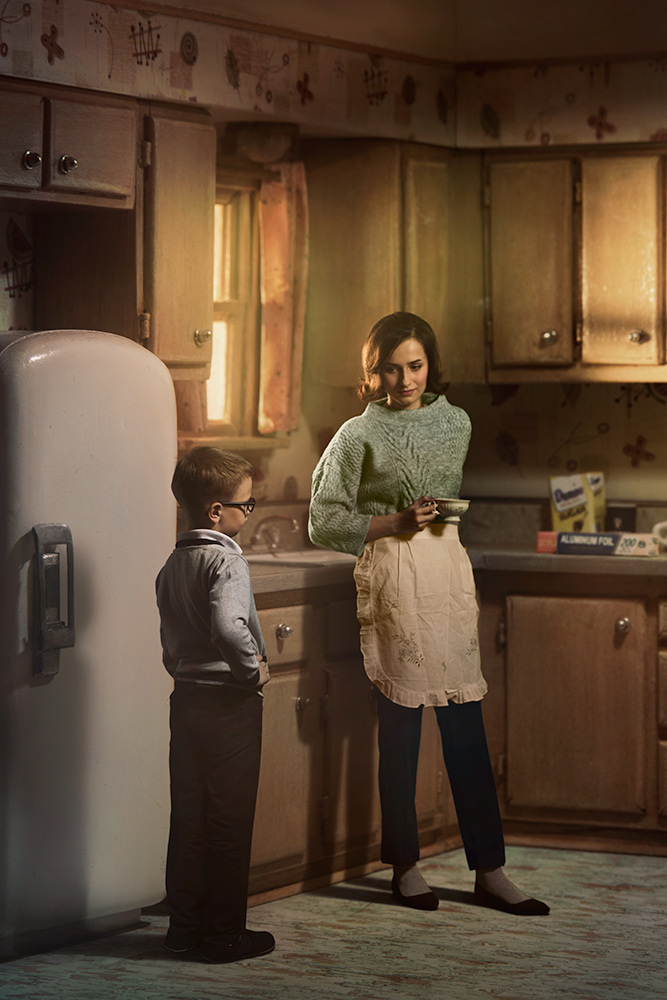 ©Richard Tuschman, Black Coffee Date: 2016–2020 My mom did have a wonderful sense of humor, possibly fueled by the numerous cups of black coffee she drank throughout the day.

I grew up in the American suburban midwest of the early 1960s. This project reflects my experience in that time and place as a young child trying to make sense out of his world and his family relationships. For this visual memoir, I photographically recreated selected vignettes from my childhood. Based on memory and family snapshots, I constructed a replica of portions of the interior and exterior of my childhood home. I then directed and photographed an ensemble of actor-models who resembled my family members.

The title, My Childhood Reassembled , in addition to describing the act of physically reconstructing the environment, also refers to the science that has shown that memories are not static, but are recreated and reassembled each time they are conjured in the human brain.

The set is a replica of the modest house in Shaker Heights, Ohio, where my parents, brother, sister and I lived from 1958–1966, or from when I was age two to age ten. These were my formative years, and my most significant and emotionally resonant childhood memories spring from then and there. Architecturally, the house was exceptionally unremarkable. Built in 1955 on one quarter of an acre, the utilitarian two-family, red brick cube contained two identical three-bedroom apartments, one on each of its two floors. Devoid of almost any architectural ornamentation, the textures and physical characteristics I recall most vividly are the coarse, tightly woven pale brown wall-to-wall carpeting, the mostly unadorned plain, off-white walls, the blue-green mid-century patterned linoleum in the kitchen, the harsh light from the large picture window in the living room, and the rough red brick texture of the exterior. What interests me are the many rich emotional associations conjured by these simple sensory recollections. For example, when I think of the heavily varnished, badly nicked, inexpensive hollow-core bedroom doors I remember the complicated, mixed feelings I harbored towards my siblings, who were alternately my best friends and arch-rivals. When I think of the kitchen linoleum floor, I remember wondering, with a mix of anxiety and curiosity, about the mysteries of my parents’ marriage, trying to make sense of their hushed tones as they spoke quietly in that room when my father came home from work late at night. 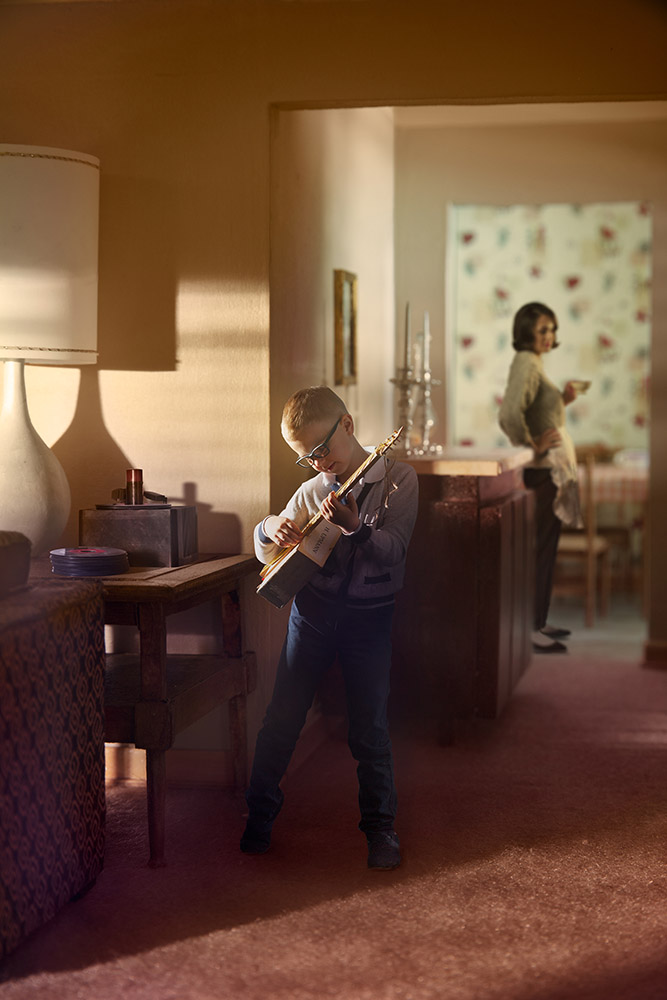 ©Richard Tuschman, The Everly Brother Date: 2016–2020 One of my favorite pastimes was playing my toy guitar along to the many 45 rpm records my parents owned. I especially loved the Everly Brothers’ “Claudette”, the B side of their bigger hit “All I Have to Do Is Dream”. I still remember the thrill I felt each time I heard it.

The visually nondescript rooms of My Childhood Reassembled , in contrast to the more romantically picturesque architectural elements and textures of past projects, confront the viewer as stubbornly esthetically mute, and this is how I remember them. Thus, by necessity, I have relied almost completely on a variety of expressive lighting strategies, along with the actors’ expressions and body language, to convey the range of moods. Childhood is as emotionally complex a period as any other stage of life, though as children we lack the ability to put such a wide range of feelings into any coherent perspective. Life then, can be at times especially magical, at times mysterious, and at times bewilderingly sad. My hope and my aim has been to create a picture that expresses both the joy and pathos of childhood, as reflected in the fluctuating and ever-changing mirror of my memory.  – Richard Tuschman, January 2021 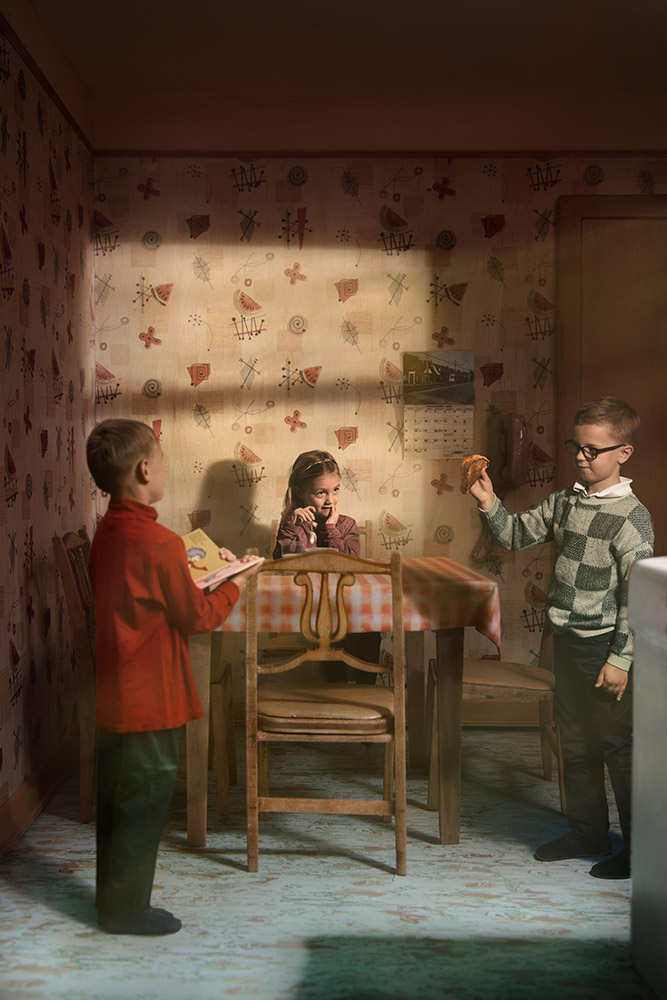 ©Richard Tuschman, Grilled Cheese Date: 2016–2020 The elementary school we attended did not have a cafeteria. Everyone walked home every day for lunch, which our mothers, virtually all of whom stayed home, dutifully prepared. Grilled cheese, though considered a staple, was something I actually did not care much for as a child. 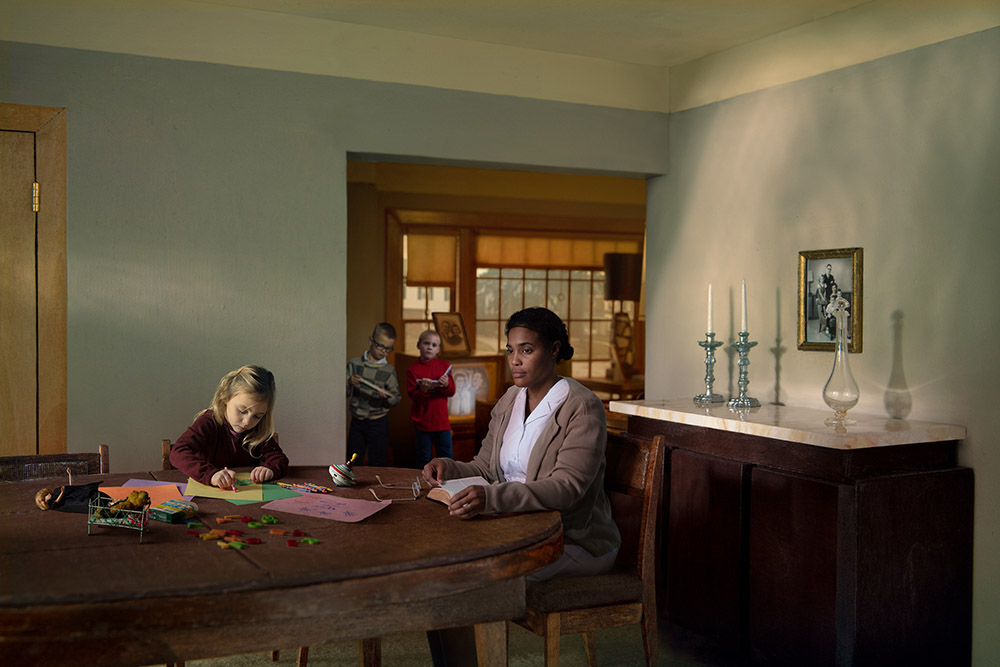 ©Richard Tuschman, Afternoon With Carrie Date: 2016–2020 My siblings and I spent a lot of time with Carrie, our housekeeper. She came to our house every weekday to clean and look after us, always in her white uniform, the custom at the time. We grew deeply attached to her, and felt as comfortable with her as with our parents. Even though we were just young children, we were probably vaguely aware that she was considered “poor” in her life away from us. But when we were together, she never let on to the constant daily stress she must have faced as a struggling single mother of color. 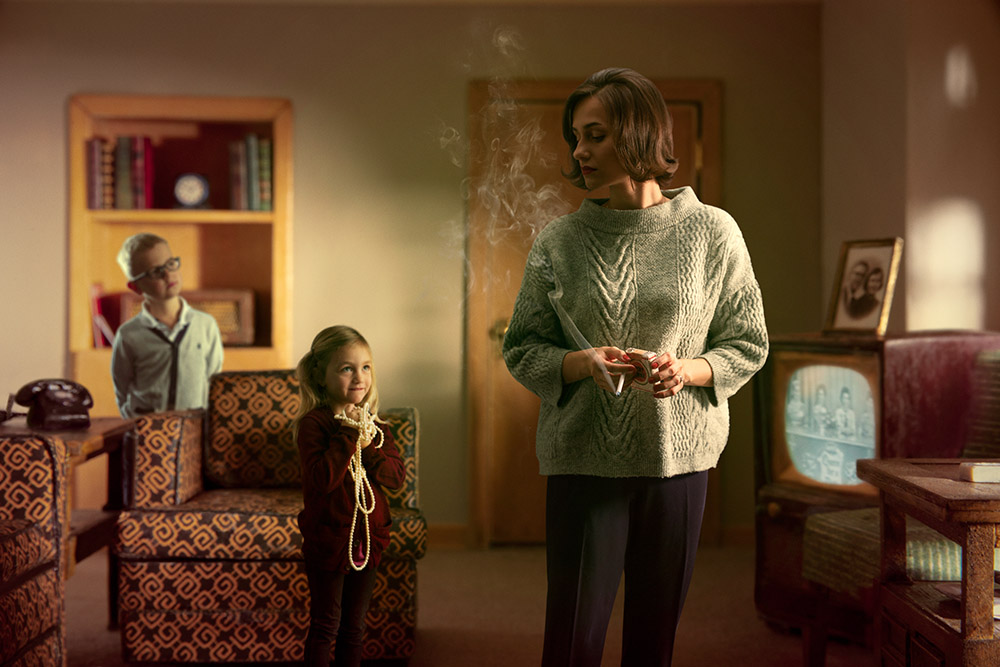 ©Richard Tuschman, Queen for a Day Date: 2016–2020 My mom smoked Lucky Strikes, and I vividly remember the distinctive logo and the soft pack always being within reach.Fortunately, she quit cold turkey when I was about ten. I hate to be anywhere near cigarette smoke now, but I don’t remember it bothering me at all as a child. 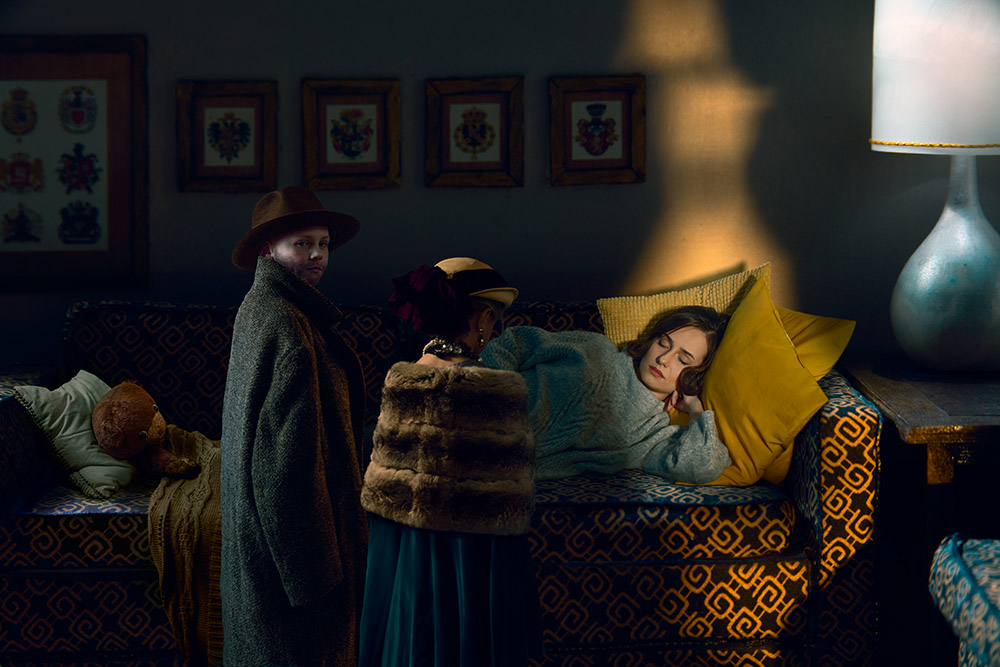 ©Richard Tuschman, Pretend Grownups Date: 2016–2020 My siblings and I were enthralled with the fantasy of being grownups, as I assume most children are. We had a generous selection of my parents’ (and grandparents’) old clothes to choose from with which to play dress-up. We loved assuming various roles, and showing off our “grownup” versions to the actual adults. 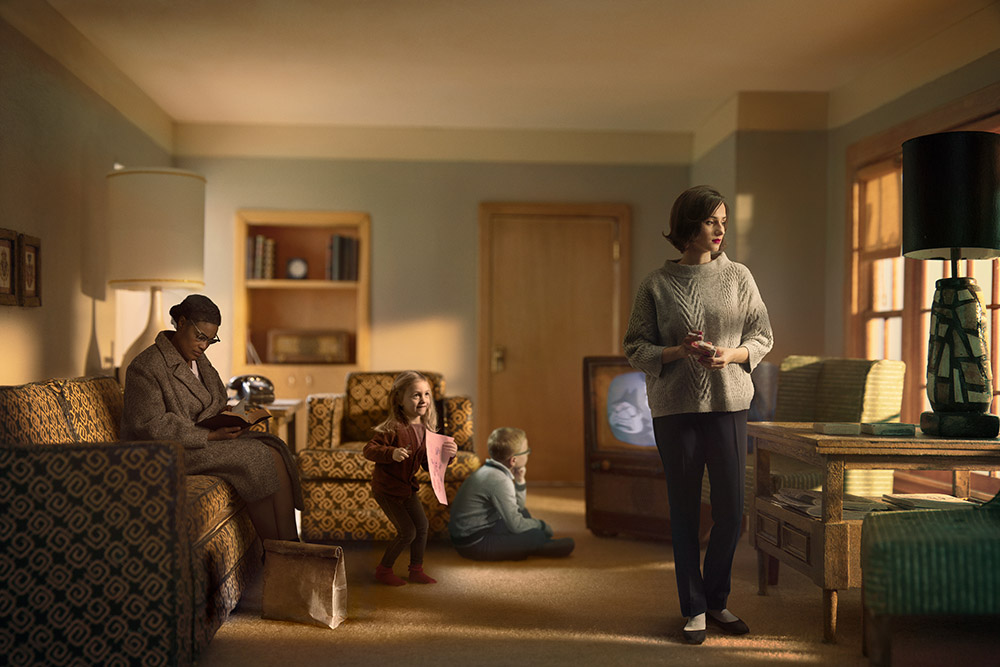 ©Richard Tuschman, Five O’Clock Shadows Date: 2016–2020 Our house faced west, so in the late afternoon the sun shone brightly through the big picture window in our living room. Carrie, our housekeeper, might be waiting for her ride (she of course did not own a car). My siblings and I would be left to our own devices to entertain ourselves. 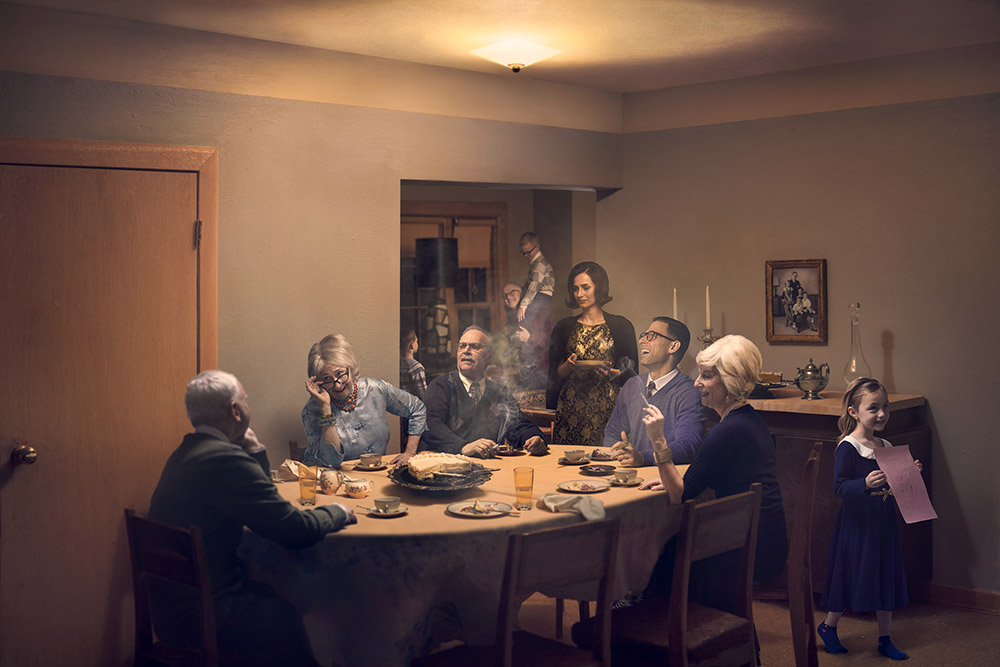 ©Richard Tuschman, Company at Dessert Date: 2016–2020 My grandparents were frequent dinner guests. My father and grandfather were both funny, and they especially loved to laugh at their own jokes. They and my great aunts kept everyone entertained. I can still picture the smoke-filled room, and hear their boisterous voices and contagious laughter as they reminisced after dinner. 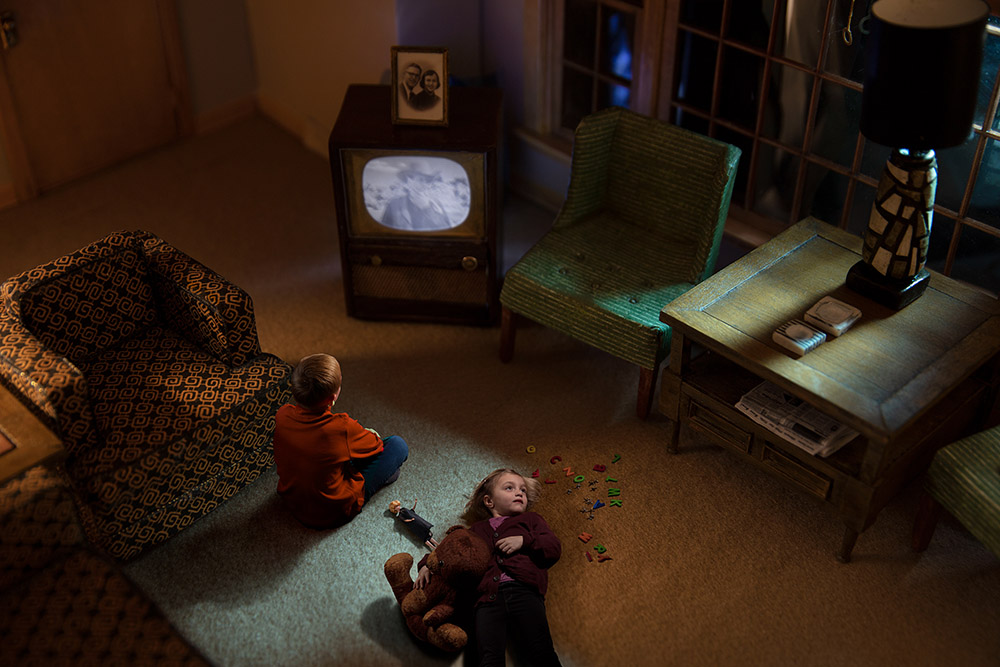 ©Richard Tuschman, Pondering Life at Age 4 Date: 2016–2020 Both siblings here represent aspects of myself as a child. I was the only family member who loved westerns, and I was also (and remain so today) an incurable daydreamer 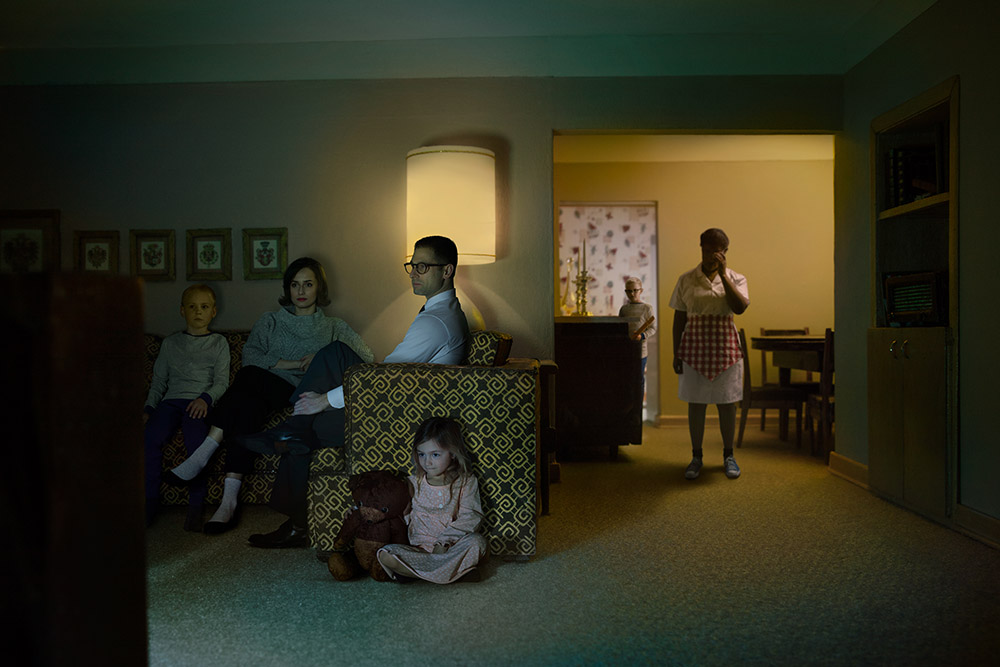 ©Richard Tuschman, Family in the Evening Date: 2016–2020 We did not have a fireplace, but we of course had a television. The picture is about the subtleties and range of family dynamics, including the natural desire for belonging, and, unfortunately, sometimes the pain of alienation 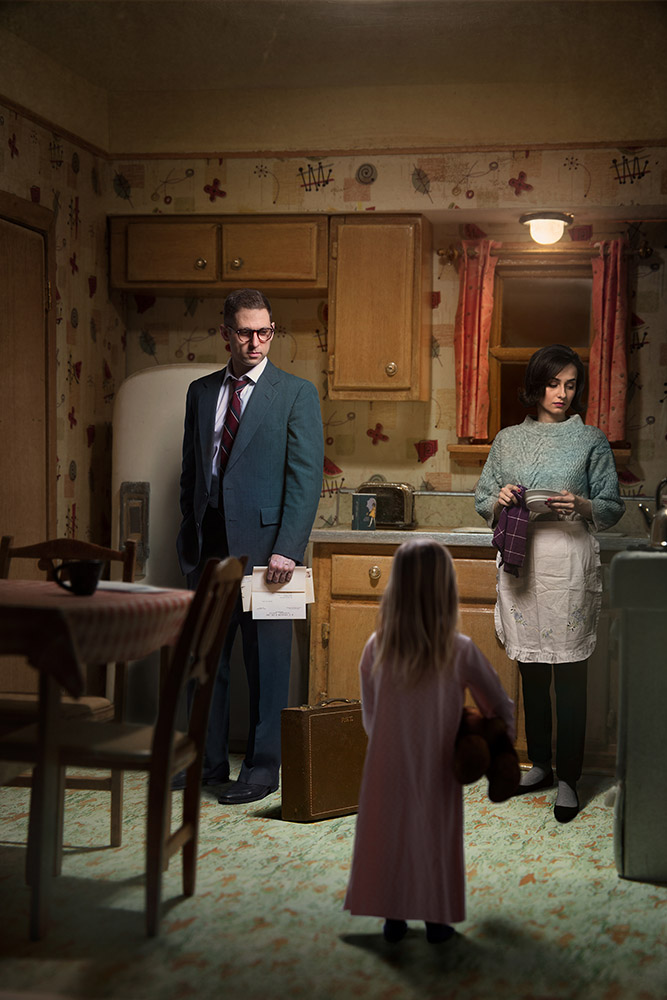 ©Richard Tuschman, When My Father Worked Late Date: 2016–2020 As a child, I wondered about the mysteries of my parents marriage. When my father came home late from work, I would try, mostly in vain, to decipher the hushed tones of their conversation in the kitchen. 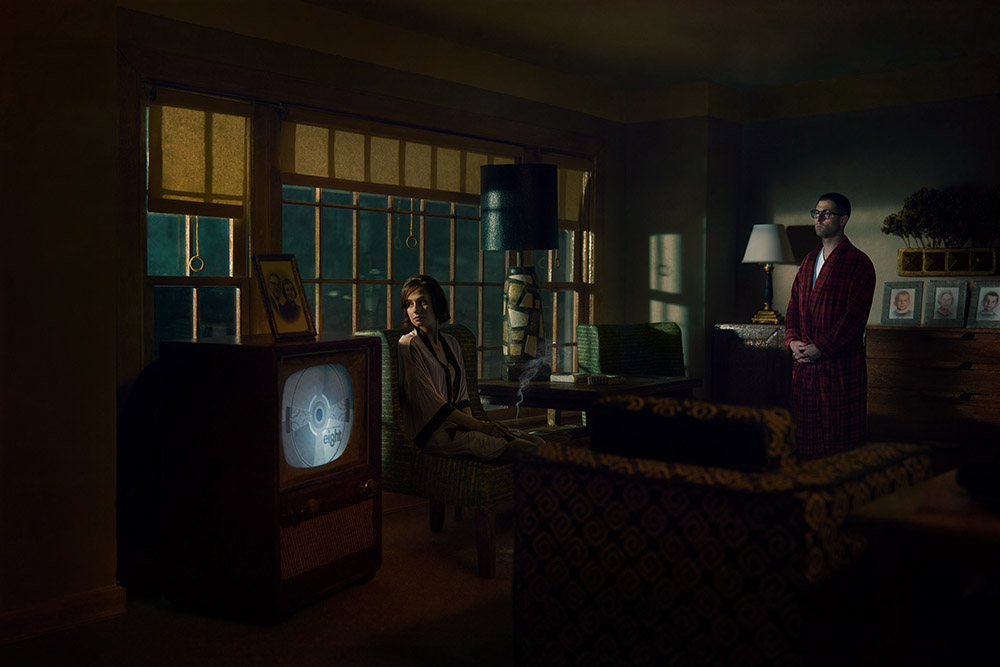 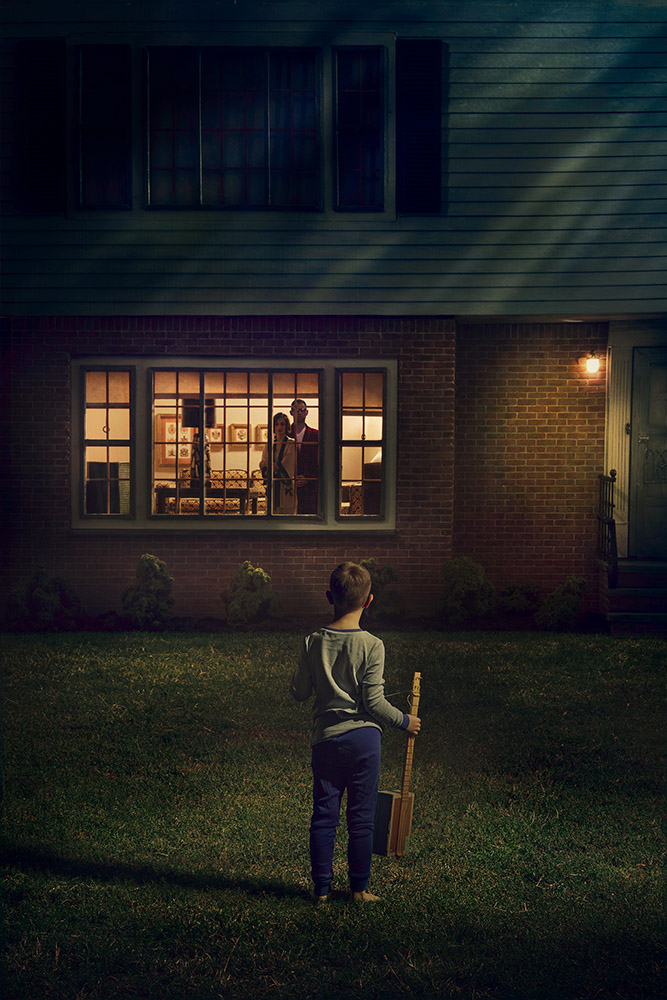