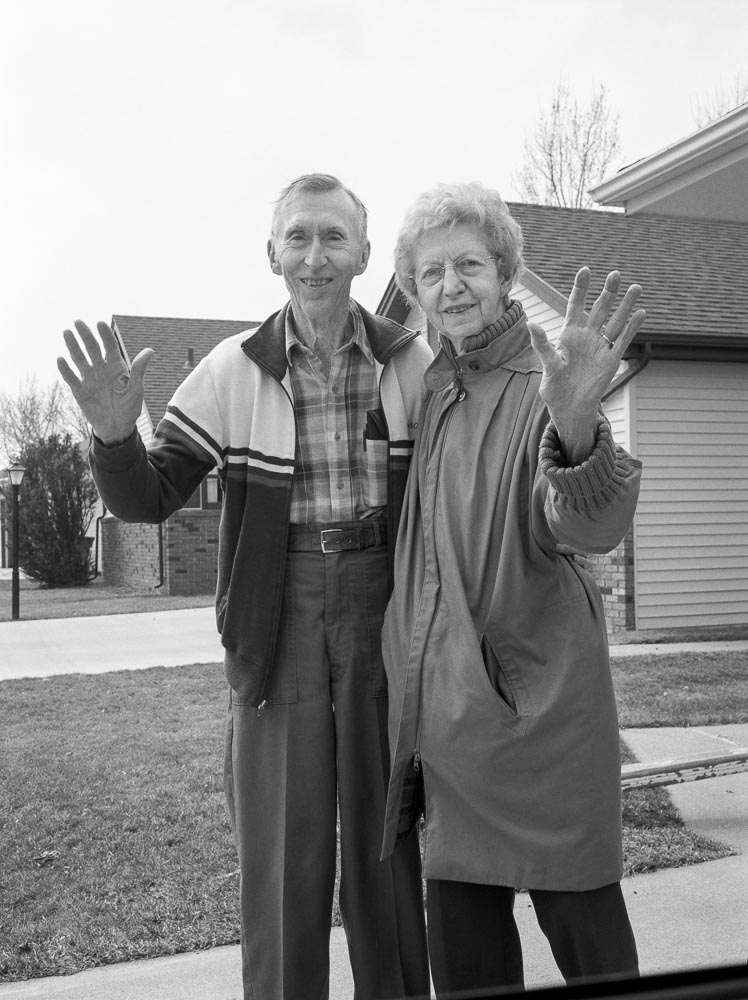 Some photo projects are organic, made for personal memory keeping or a desire to document familial events, large and small. I have been a long time friend and fan of Deanna Dikeman and have so enjoyed the decades long documentation of her family doing ordinary things, living ordinary lives, resulting in an extraordinary body of work that speaks to time, memory, and routine. One of those routines that Dikeman captured each time she said her goodbyes was to photograph her parents waving to her as she departed. This simple gesture seems unremarkable as a singular event, but when you gather 27 years of goodbyes, the work is poignant and profoundly meaningful. Starting in 1991, she has chronicled this simple and heartfelt gesture, with a history that comes to a inevitable end. Though personal, this project has a universal appeal that speaks to familial love and the quiet gestures that bond us together.

An article of this work appeared in the New Yorker last year and it was rated #15 in their Top 25 Stories of 2020. And I know why, particularly in a year of loss and a re-appreciation of family, the evidence of loving one another is simply profound. Dikeman has just released a monograph of  Leaving and Waving, published by Choose Commune. The publisher has a few books left, and Dikeman hopes for a second edition.

Deanna Dikeman was born in Sioux City, Iowa, USA, in 1954. She has been an artist-photographer since 1985, when she left a corporate job to try a photography class. She has M.S. and B.S. degrees from Purdue University. She has photographed her family in Iowa and Nebraska in a body of work called Relative Moments. She has done a series of photographs of interior details of homes, Home Alone in the Middle of the Day. Her Wardrobe project includes photographs of old clothes in thrift stores and a historical costume collection. Other projects are Suburban Photographs, Lost Dog (posters of lost pets), Ballroom (ballroom dancers and their clothing in movement), Lot Line (looking at the spaces between houses), and Sprinklers, Birdbaths, and Puddles.

In 2008, she was awarded the $50,000 United States Artists Booth Fellowship. She received the Aaron Siskind Foundation Individual Photographer’s Fellowship in 1996. Other honors include a 2006 Charlotte Street Foundation Fellowship in Kansas City, and the Art Omi International Artists Residency in Ghent, NY.

Since 1988, Deanna has had seventeen solo shows and has been included in 148 group and two-person shows. Her photographs have been public art projects in Kansas City, Missouri; St. Louis Missouri; and Albany, New York. Her work has been published in The New Yorker Photobooth, The New York Times T Magazine, GUP, Slate Behold, Der Tagesspiegel Sonntag, De Volkskrant Observatorium, M Le magazine du Monde, and VOSTOK, among others. Her self-published book, 27 Good-byes, received Honorable Mention in 2010 Photography Book Now. Her book Leaving and Waving was just published by Chose Commune in March 2021, after being short-listed for the MACK 2020 First Book Award.  IG @deannadikeman Twitter @dbdikeman 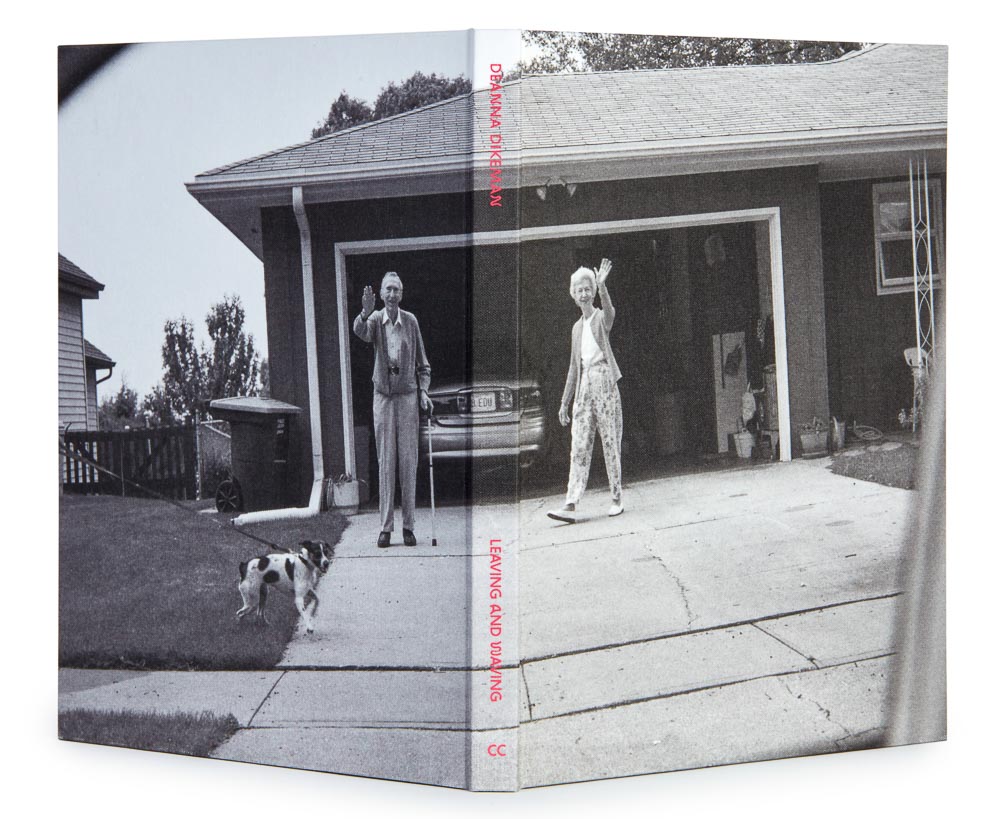 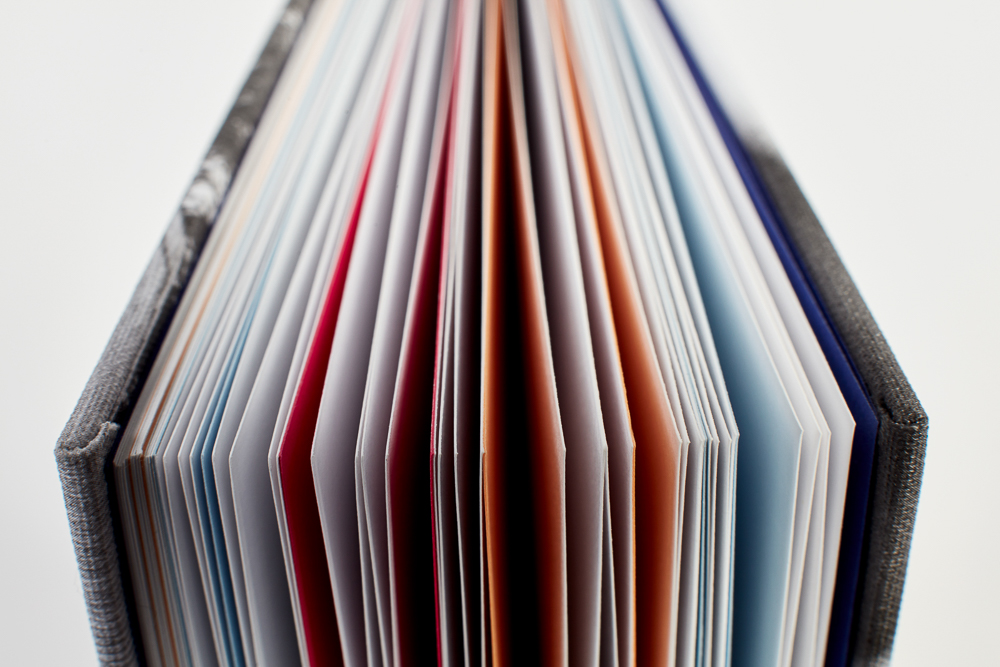 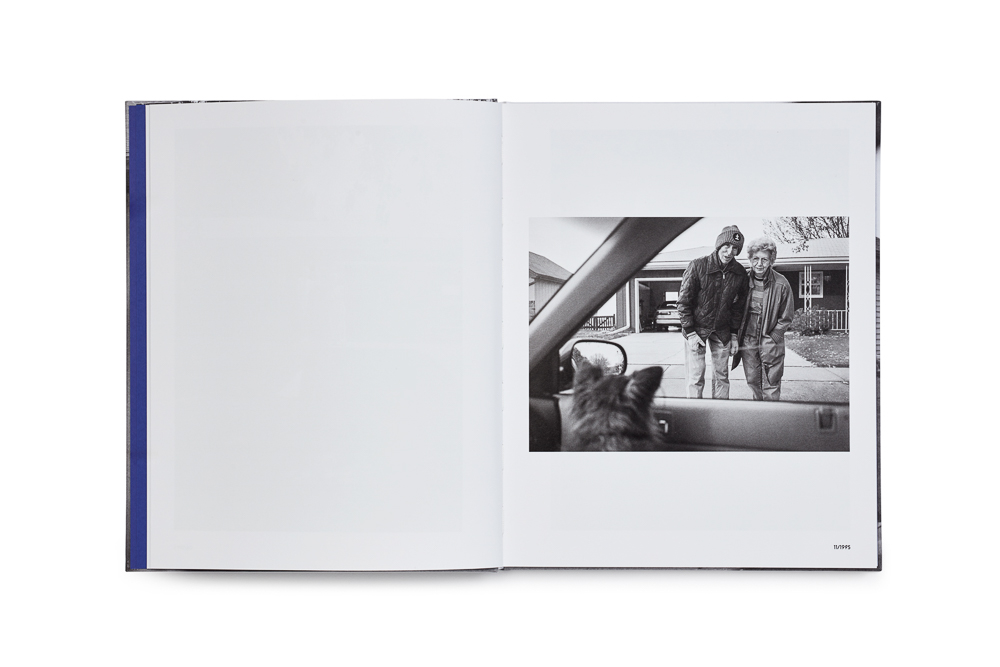 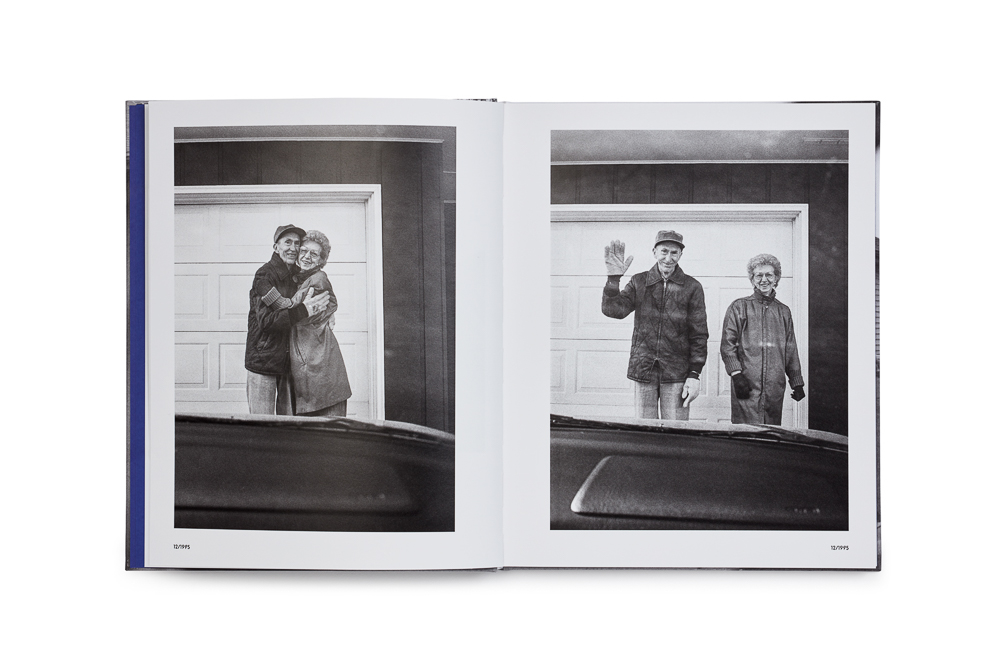 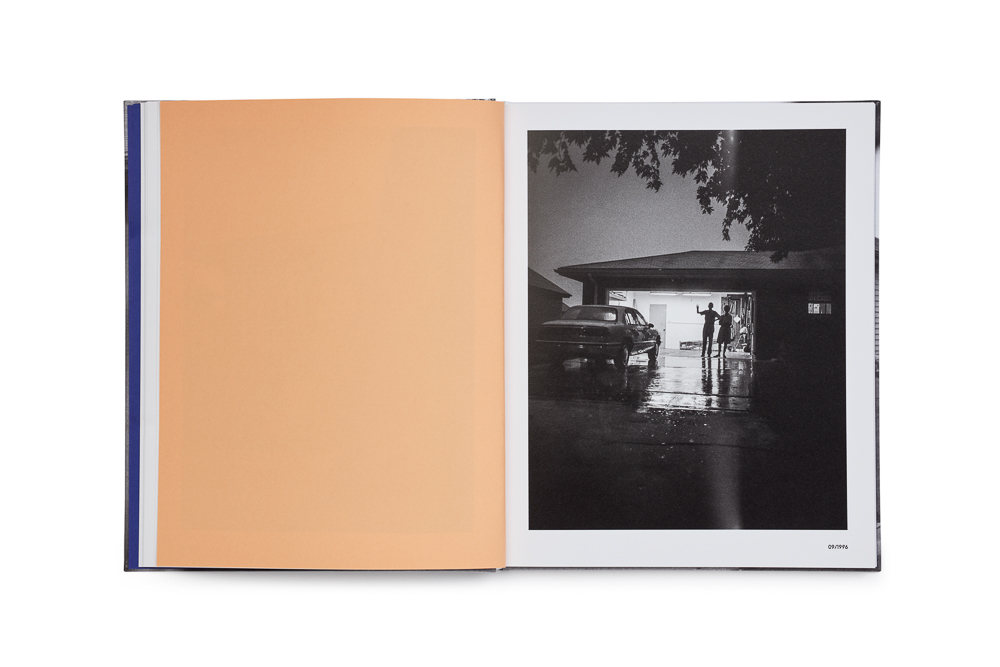 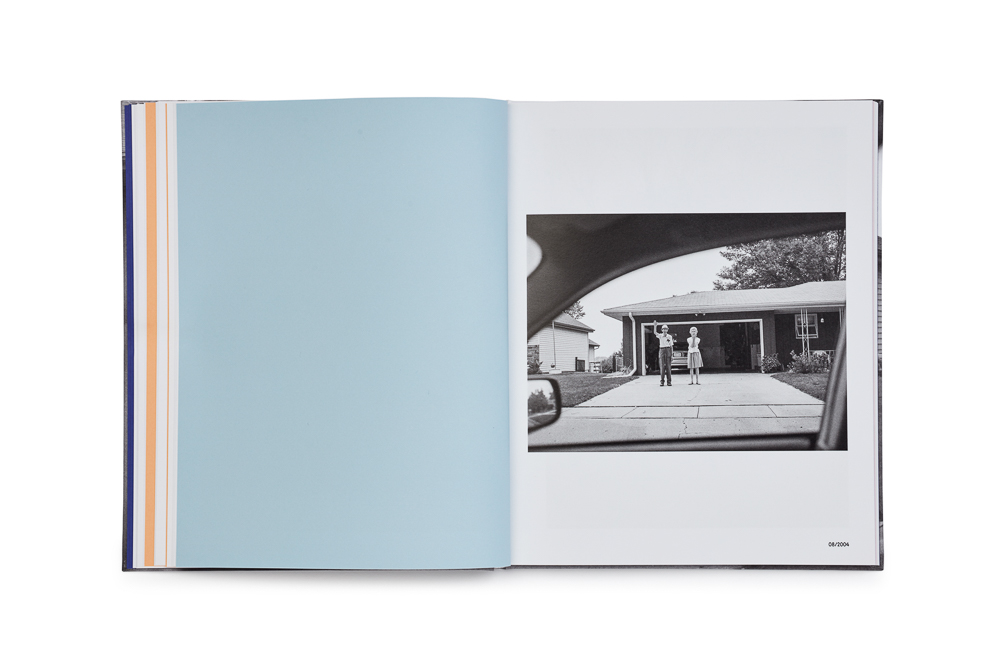 For 27 years, I took photographs as I waved good-bye and drove away from visiting my parents at their home in Sioux City, Iowa. I started in 1991 with a quick snapshot, and I continued taking photographs with each departure. I never set out to make this series. I just took these photographs as a way to deal with the sadness of leaving. It gradually turned into our good-bye ritual. And it seemed natural to keep the camera busy, because I had been taking pictures every day while I was there. These photographs are part of a larger body of work I call Relative Moments, which has chronicled the lives of my parents and other relatives since 1986. When I discovered the series of accumulated “leaving and waving” photographs, I found a story about family, aging, and the sorrow of saying good-bye.

In 2009, there is a photograph where my father is no longer there. He passed away a few days after his 91st birthday. My mother continued to wave good-bye to me. Her face became more forlorn with my departures. In 2017, my mother had to move to assisted living. For a few months, I photographed the good-byes from her apartment door. In October of 2017 she passed away. When I left after her funeral, I took one more photograph, of the empty driveway. For the first time in my life, no one was waving back at me. 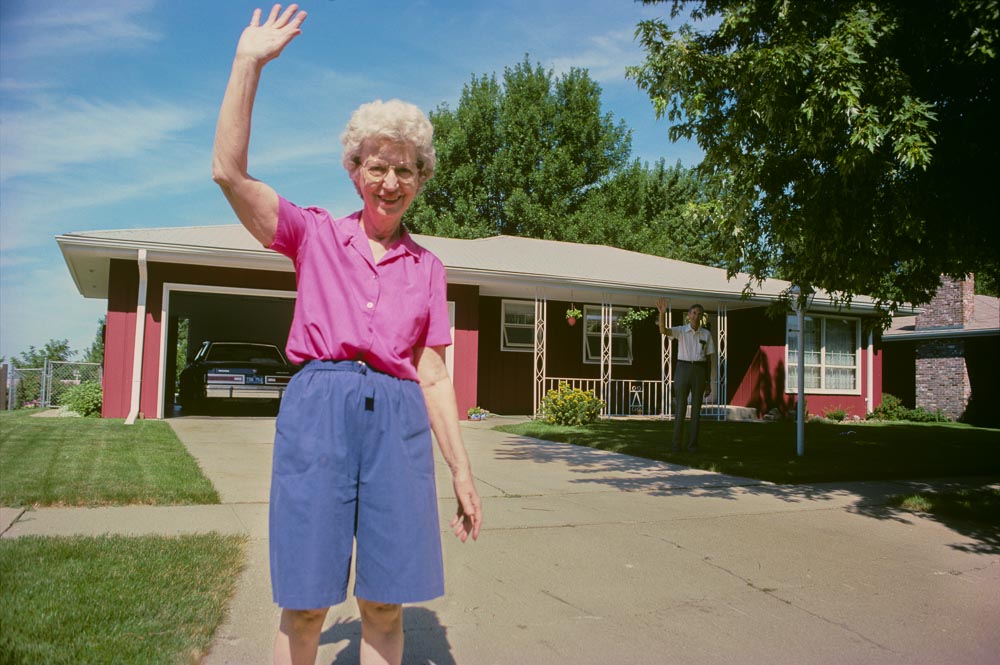 Congrats on the book Deanna…it’s profoundly wonderful! Can we start at the beginning and tell us about growing up with your wonderful parents and what life was like as a child?

Life in Sioux City, Iowa, was mostly a “Norman Rockwell” childhood. I grew up surrounded by loving parents and a convivial extended family, with many large holiday suppers and backyard picnics. I had two special aunts with whom I spent time on sewing, crafts, and oil painting projects, which helped nurture my interest in art. I was lucky to have such a charmed childhood. 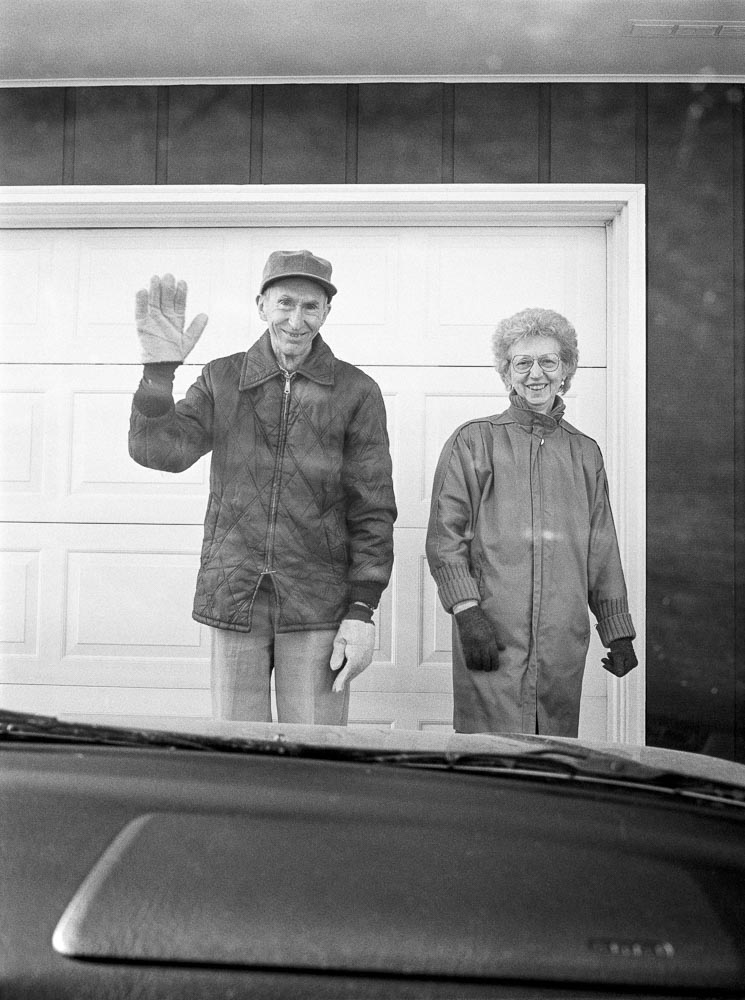 I probably learned to love photography because my dad always had a camera and took photos of our family at birthdays and holidays and on vacation. I had a little Brownie plastic box camera. I remember going into A&A Photo in Sioux City, Iowa, to pick up our rolls of processed film, prints for me and slides for Dad. There was the magic (and sometimes disappointment) of opening the yellow-orange Kodak branded envelopes to see what we had shot. The store smelled like a film lab, which I loved.

My teachers and parents encouraged me to study science in college. I didn’t get around to photography until I had tried many pursuits and found that none of them quite fit: biology major, medical school, MBA, corporate jobs, and graduate school in epidemiology. Finally at age 31, I took a photography class for fun and found my passion.

I’m curious to know what started your multi-decade long documentation of your family–the mundaneness of doing crossword puzzles, or mowing the lawn. How did you know the importance of that work?

I didn’t know the importance of it. Several things happened to me all at once that got me started. My parents sold my childhood home and moved to the red ranch house you see in the goodbye photos. My husband took a job in Louisiana and we moved there from Kansas City. I started to see the midwest with fresh eyes. I began to take photos of my parents when I visited, because I didn’t get to see them as often. Iowa suddenly looked interesting.

One summer I took many snapshots of Mom and Dad in their home and yard. When I showed them to a photographer friend, who also grew up in Iowa, he saw the greater meaning in a photo of my dad at the backyard barbecue grill. I started to realize my family photos could be more than personal snapshots. So I kept going. 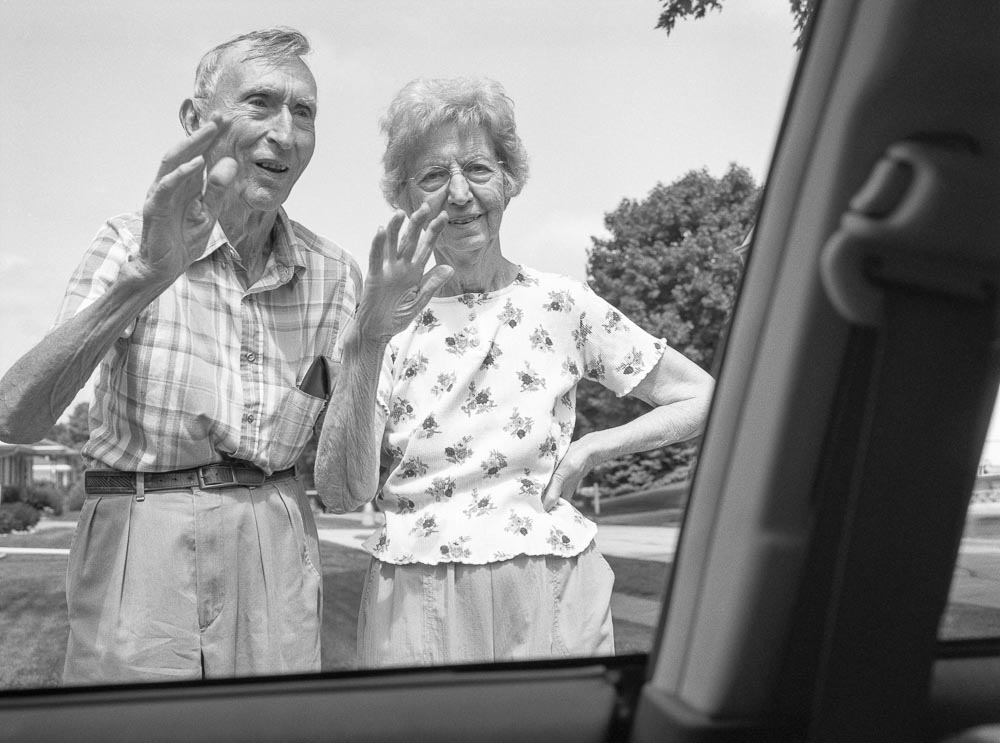 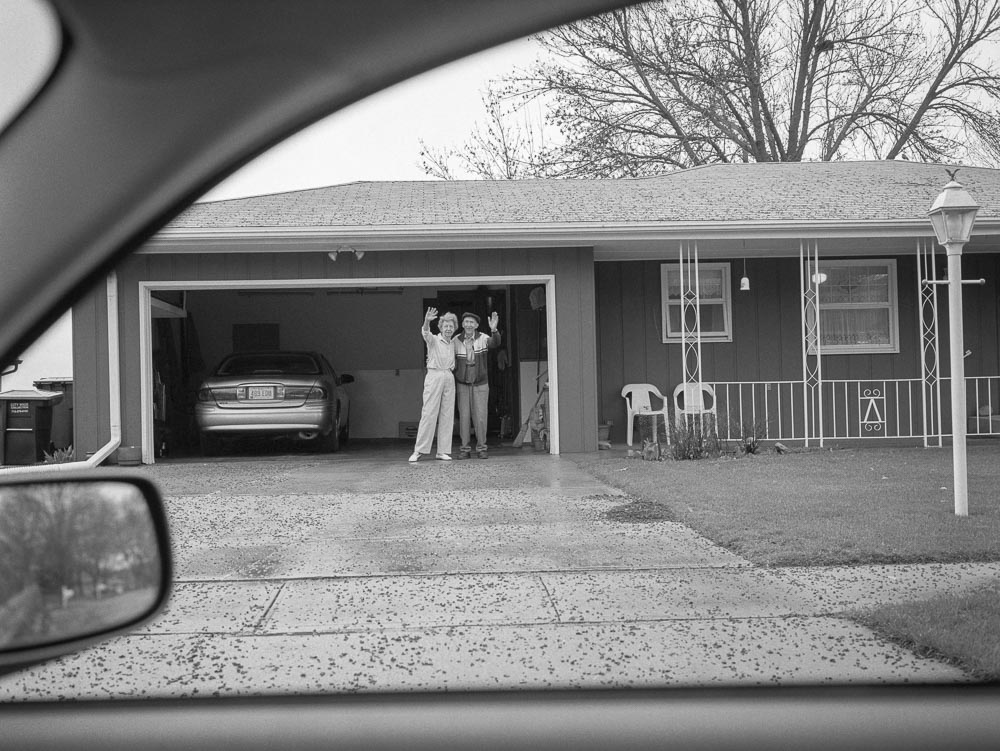 Leaving and Waving is yet another long time focus…did it start with one and you kept documenting that moment? Did you ever forget to take a picture at the end of a visit?

I didn’t forget, but there are a few years where there are no photos. I took that first Kodachrome snapshot in 1991, because everything was so colorful: Mom’s pink blouse and indigo shorts, the blue sky and the green grass, and the red house. (Side note: the color papers inserted into the book are inspired by Mom’s colorful clothes.) I was disappointed in the slide because Mom isn’t in sharp focus. I tried another waving goodbye picture in 1992 and felt like I had a good one. I had no intention of a goodbye project, so for a couple of years I didn’t document any more departures. There’s only one photo in 1994. In 1995, I couldn’t resist taking a photo of my parents saying goodbye with my dog in the car window. After that, I started taking regular photos of each departure. But still, it wasn’t a project. It was just a way of saying goodbye. I started to think about how they were getting older and maybe a photograph made as I drove away might actually be the last photo I would ever take of Mom or Dad. The photos became a way to preserve that potential last wave goodbye.

After your father passed and it was only your mother doing the waving goodbye, it must have been so poignant and sad. Or was it?

It was truly sad. Mom was a widow and lonely. She lost a sister-in-law, a sister, and a brother the year after Dad died. Every time I left, she had to walk back into an empty house. It was difficult for me to get in my car because she always cried when I gave her that last hug. Sometimes we had some smiling photos in the driveway, but often you see the sorrow in her eyes. 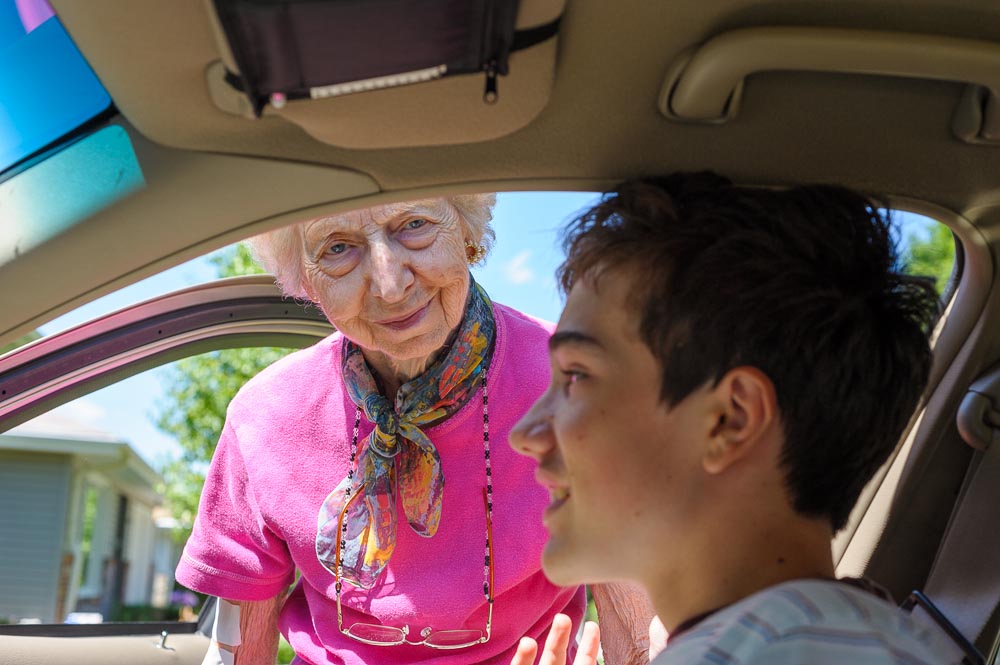 Now that both of your folks have passed, the book is an incredible testament to your relationship. Were they aware of the potential of this work and how deeply it affected people?

I think they were. The summer before Dad died, I had made a self-published book of some of the goodbyes and I showed it to Mom and Dad. “Bemused” is the word that comes to mind when I try to explain how they regarded these photographs. I think they were pleasantly surprised that others would find their ordinary lives interesting.

I’m going through the many 3-ring binders of negatives of my whole Relative Moments project. I’m finding wonderful memories and so many photographs that I overlooked when I first processed the film.

I just had a perfect day! This past April my son came to visit me in Kansas City for my birthday. The weather was warm and sunny. We played miniature golf at the outdoor Nelson-Atkins Museum of Art “Art Golf” course. We bought a birthday cake at my favorite bakery. We grilled steaks on the patio and we took my dog for a walk. How perfect is that? 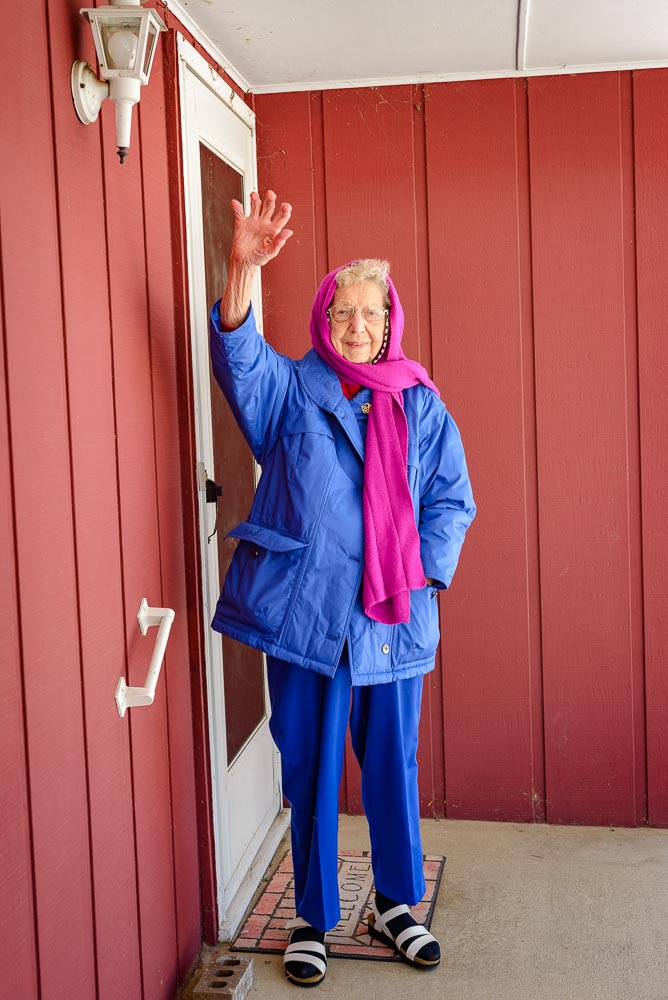