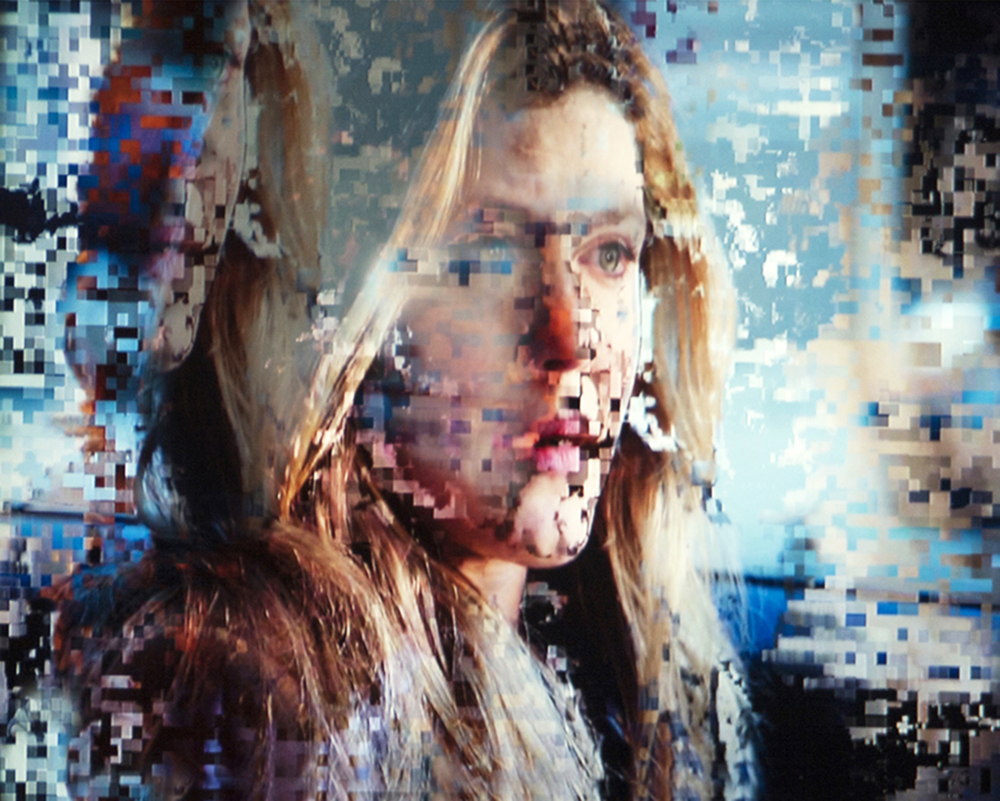 This week we are featuring projects that push the boundaries of traditional photography. Artist Sherry Karver has a long career of mixing mediums and taking imagery into new avenues. Recently she has been creating Glitch art –the practice of using digital or analog errors for aesthetic purposes by either corrupting digital data or physically manipulating electronic devices. Karver is part of the group, Techspressionism that explore these ideas. “Techspressionism is introduced as a new art-historical term to describe fine artists using digital technology to convey subjective, emotional content. Techspressionism distinguishes expressive fine art results from such genres as “digital art,” which can include animated movies, and video games, as well as  from “new media” works that do not embody convincing artistic intent.”

Karver is not a traditional photographer. She is constantly looking for new and innovative approaches to the medium, and became interested in glitch art totally by accident. One day the image on her TV screen started to pixelate and break apart due to uneven reception. Karver was immediately taken with the way the images fragmented, stretching the colors, lines, and shapes into a new format.

Sherry Karver has exhibited her work both nationally and internationally and is in over 180 private, corporate and museum collections. She has had over 25 solo exhibitions and is represented by several galleries. She lives in Oakland, CA with her husband, poet and novelist Jerry Ratch. 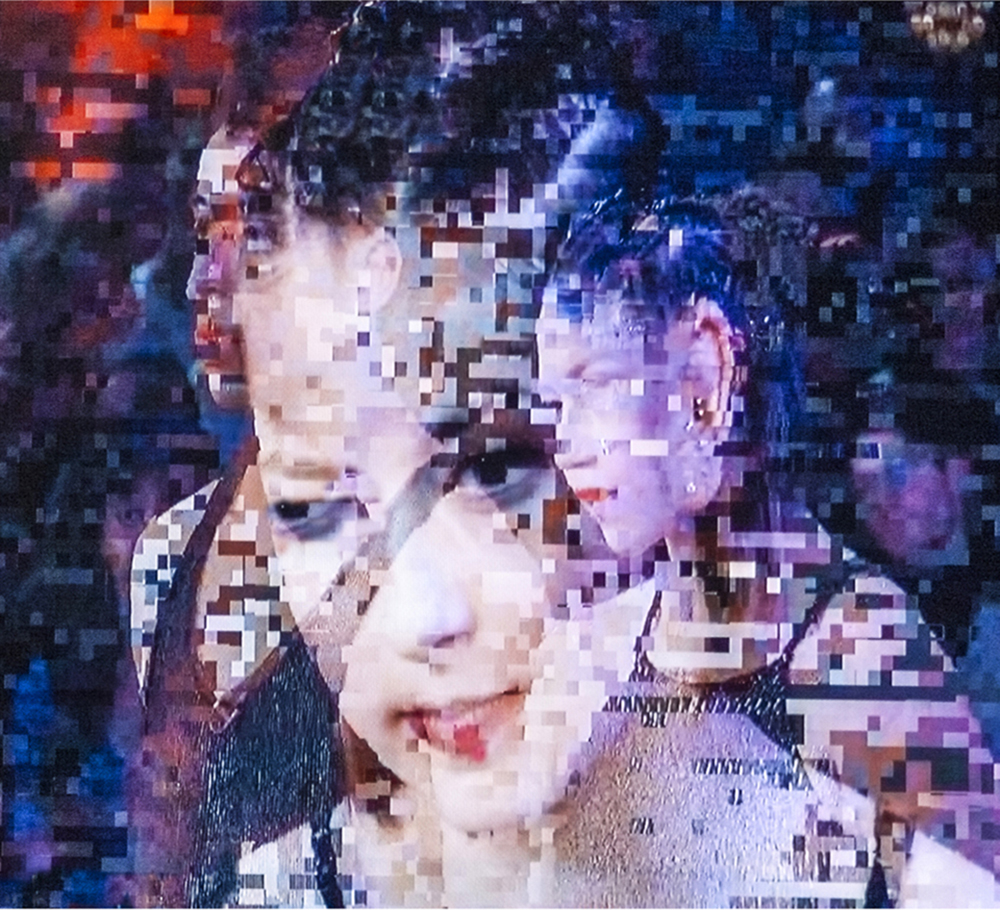 ©Sherry Karver, Competing With Oneself

Embracing chance, serendipity and random occurrences as the basis of this current photography series called “Movement Interrupted”, I am ‘capturing’ images off of a TV screen, intentionally waiting to photograph when the screen becomes ‘pixelated’ and fragmented due to uneven reception.

I began this series a couple of years ago, but now the concept of movement interrupted has taken on an even greater meaning since our movement has become literally interrupted due to Covid19.

By harnessing the visual effects of data corruption glitches for aesthetic purposes, I am allowing these glitches to create the images that I am photographing. I am actually using the breakdown of technology to create these images within a fine art context. They are not created using Photoshop or any algorithm. Other than minor cropping these are actual unaltered photographs.

It seems that we are in a difficult period in our history, where things seem to be disintegrating and falling apart, which is what my work reflects. At the same time I try to see the beauty and hopefulness in the uncertainty.

The images I am photographing appear for just a moment and become deconstructed, stretching the colors, lines, and shapes into a new format, from recognizable to almost abstract. The little squares that arbitrarily appear on the TV screen represent to me how our technological world interacts with, and effects people and the environment itself.

This method of working is exciting to me because it is almost like magic, where the TV is ‘channeling’ these shots and I am there to capture the split second in a photograph before it vanishes forever. The process is experiential, creating images that are fluid, authentic, and could not happen by planning.

These are Dye Sublimation Prints on Metal in small editions. I’ve chosen to use metal rather than printing on paper because the metal substrate shines through the surface, adding another visual layer of depth. The industrial feel of the metal works well with contemporary digital technology and the glitches that occur. 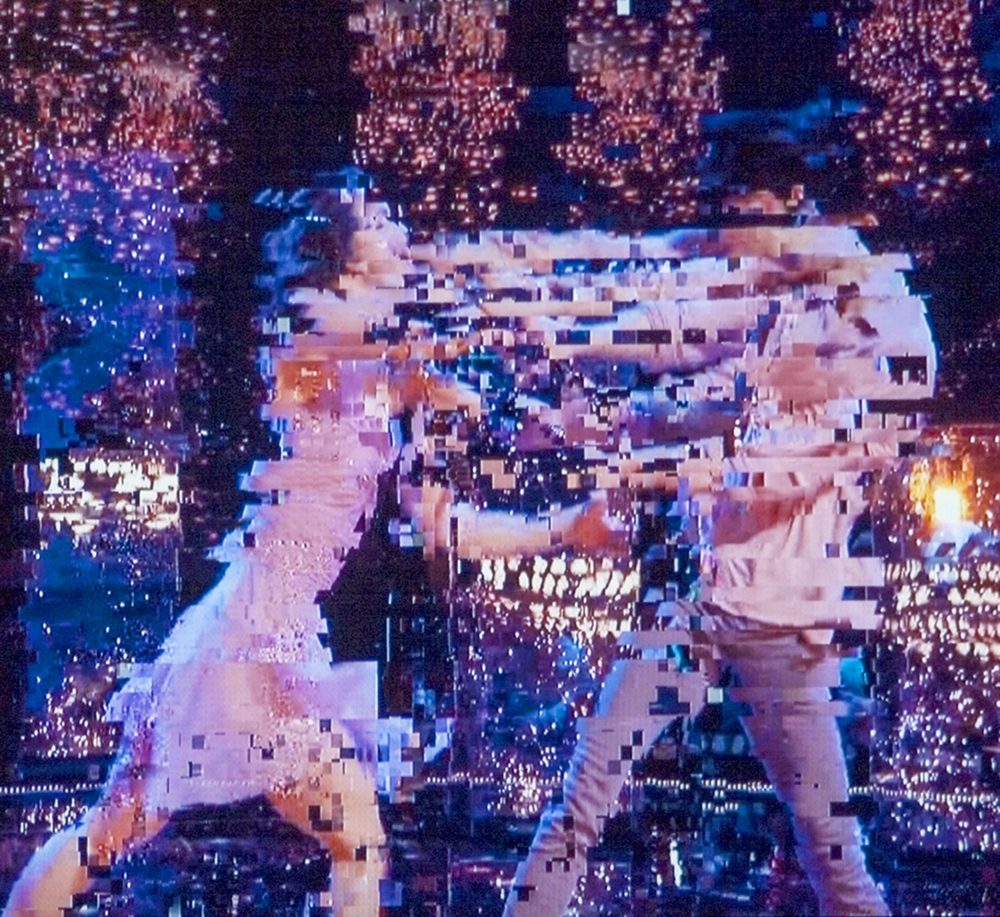 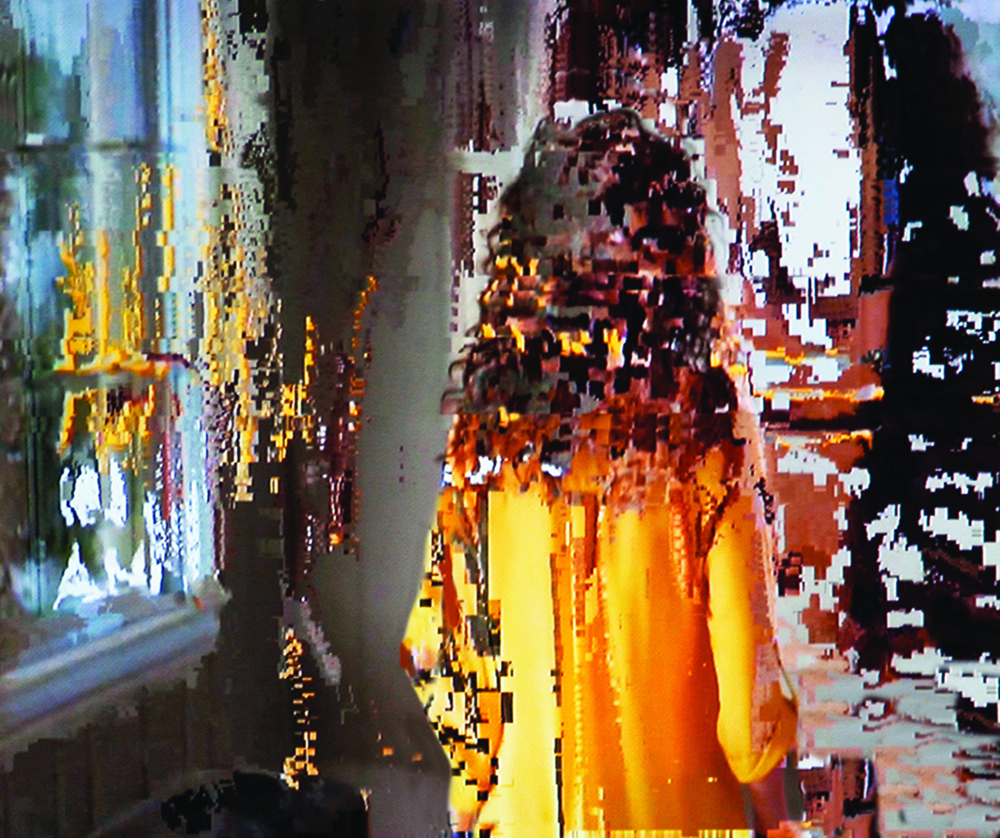 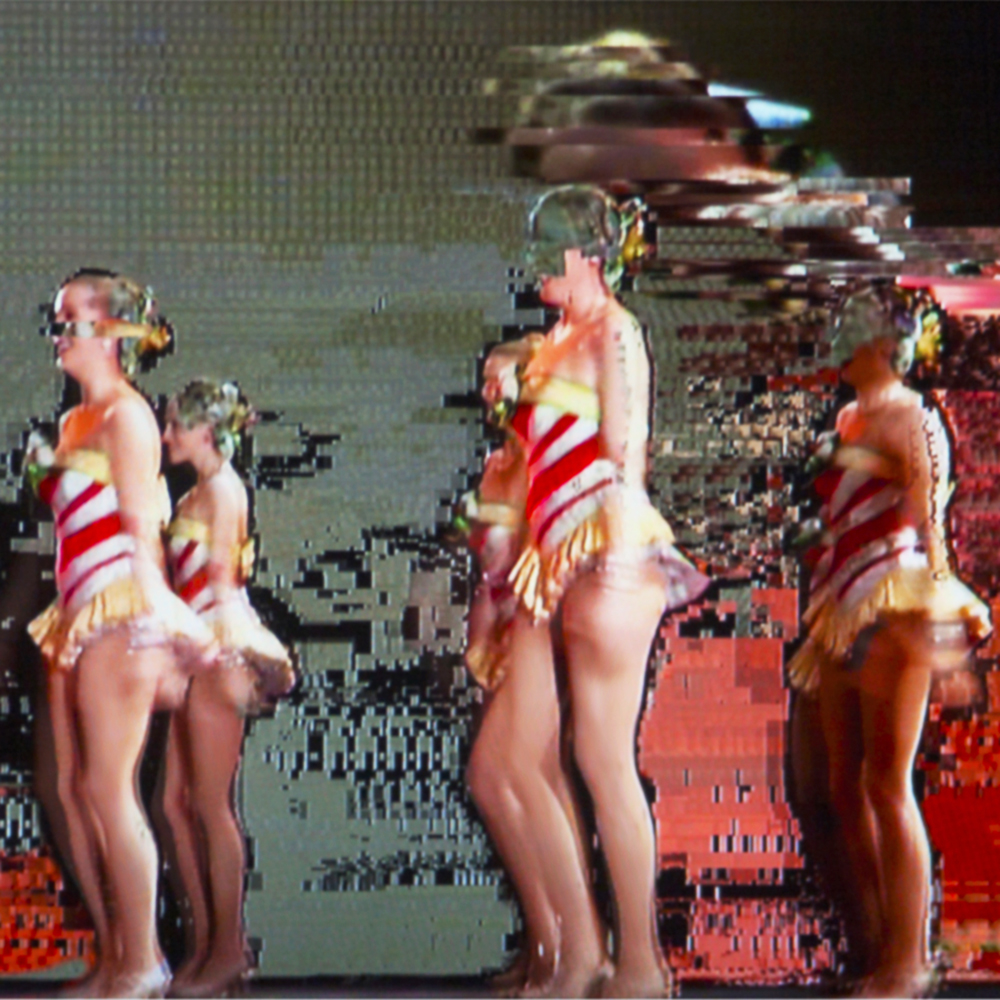 ©Sherry Karver, Waiting In the Wings 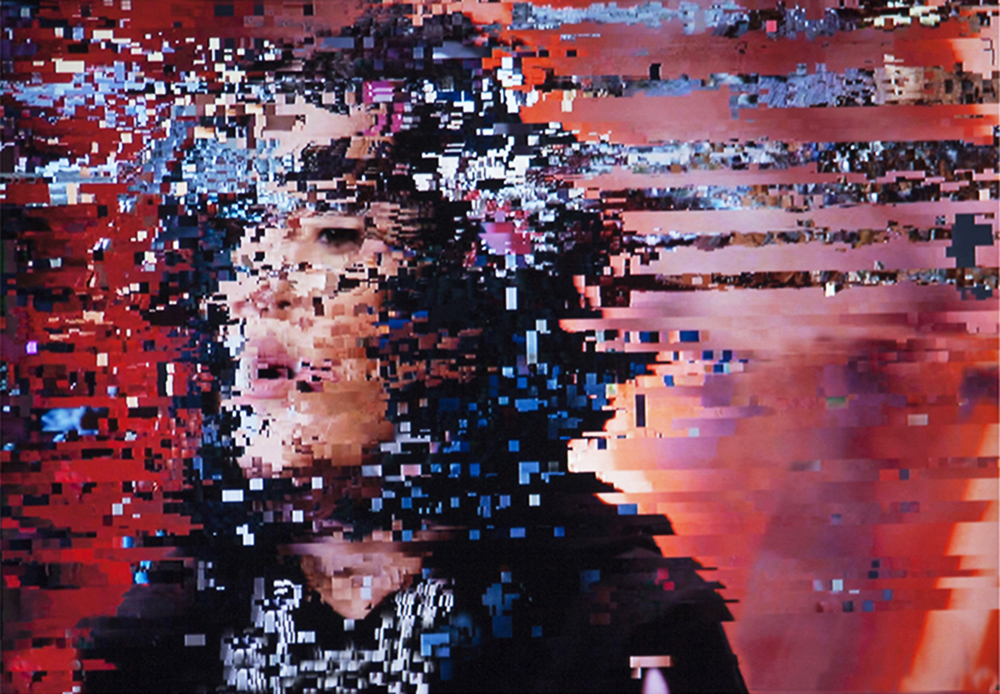 ©Sherry Karver, Thinking Too Much 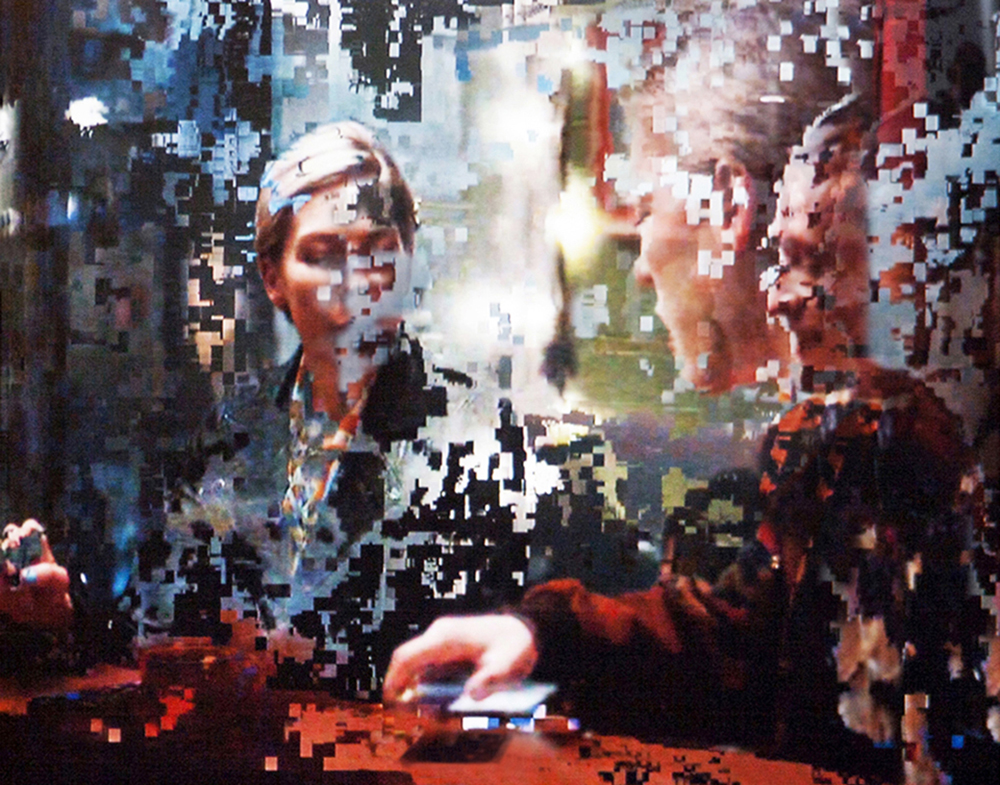 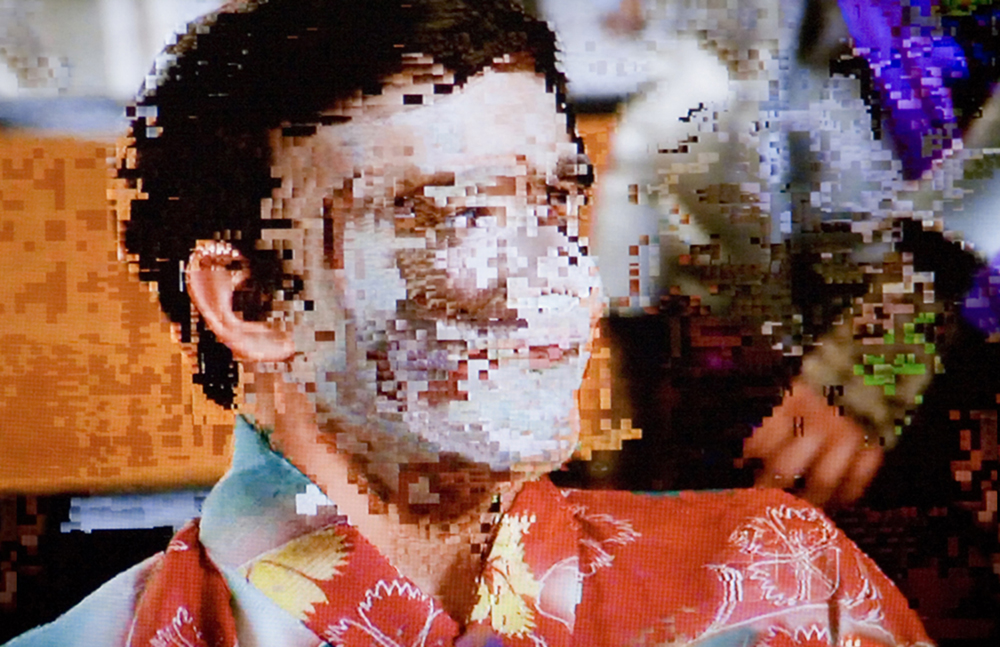 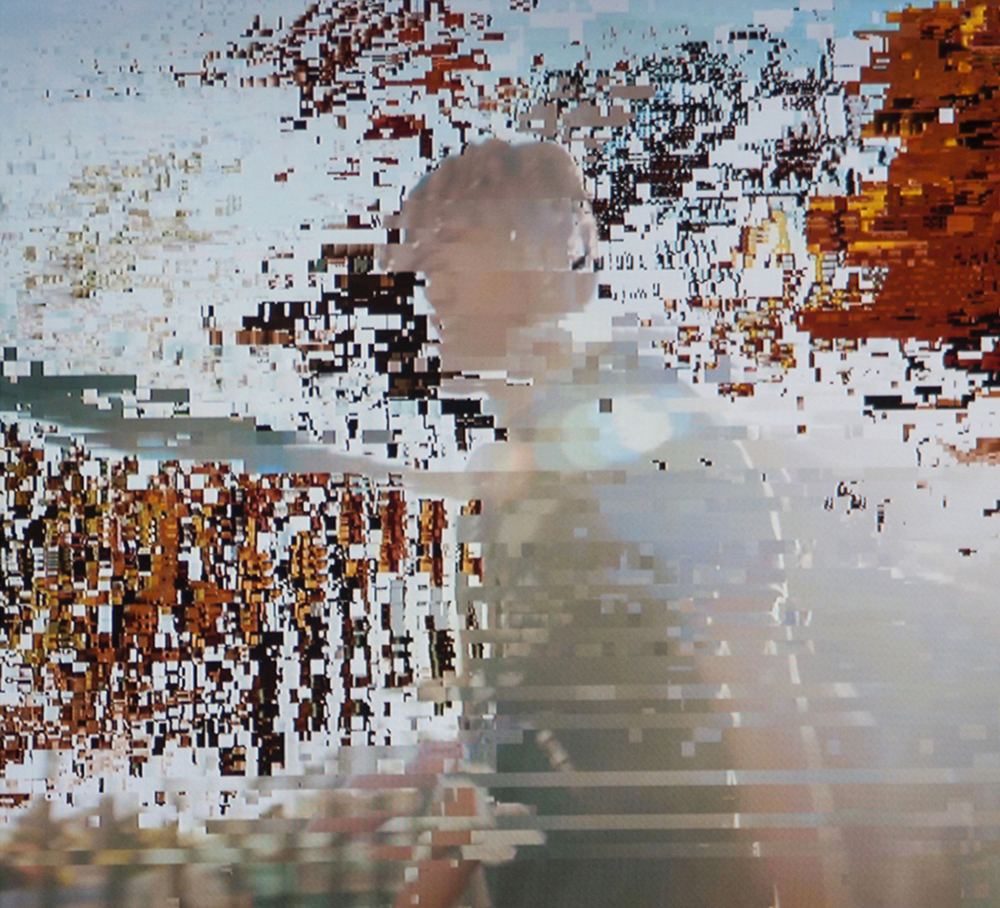 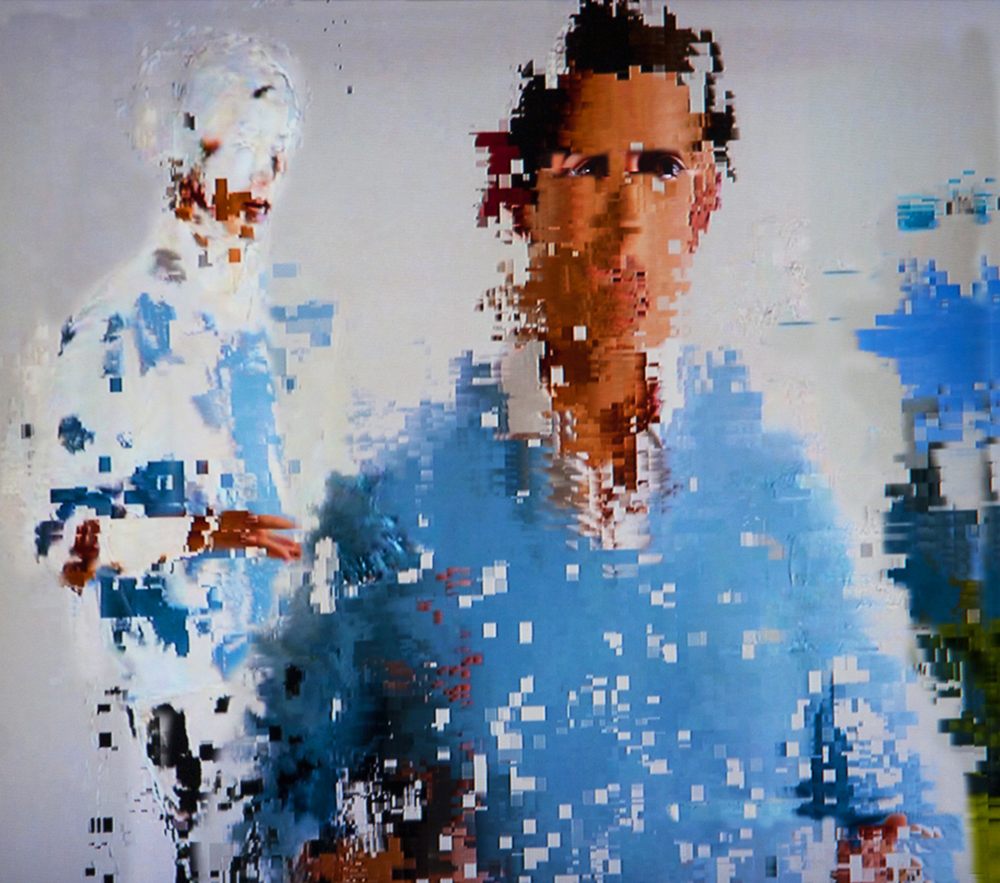 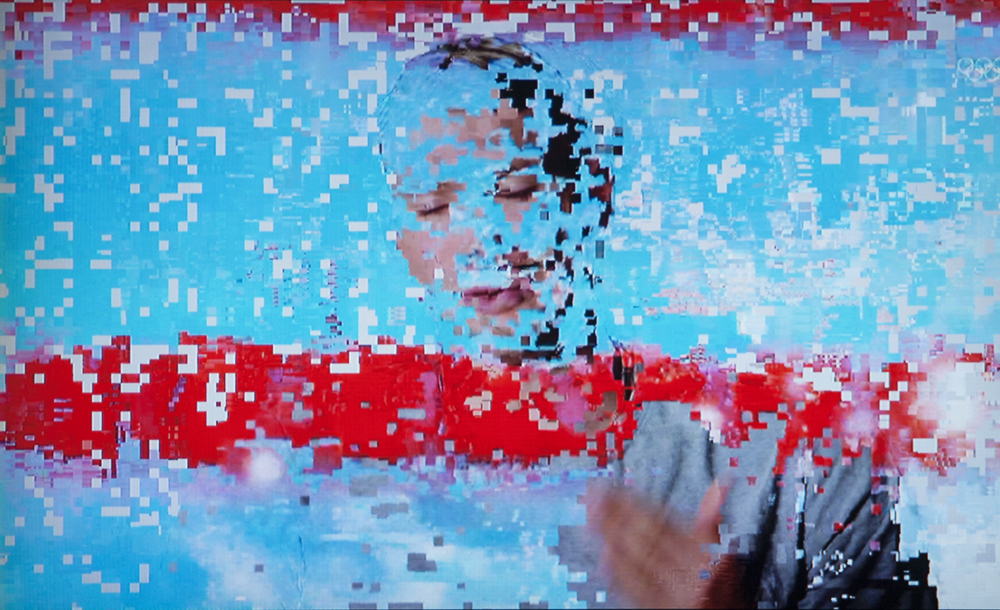 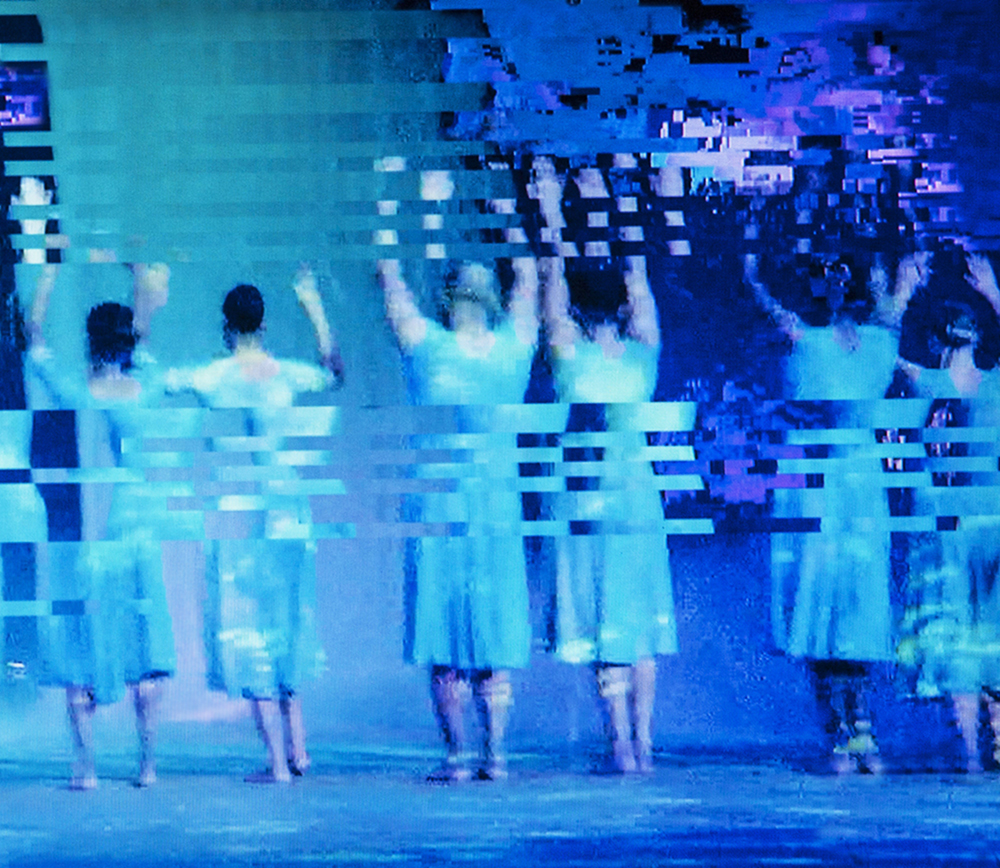 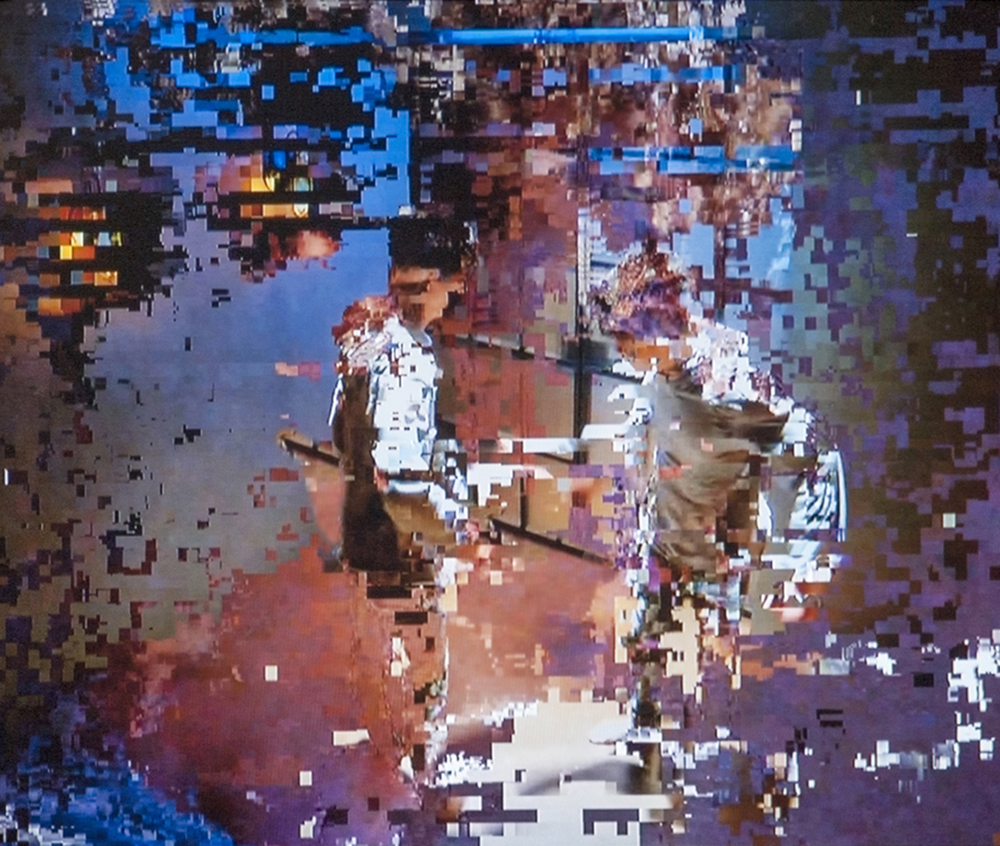 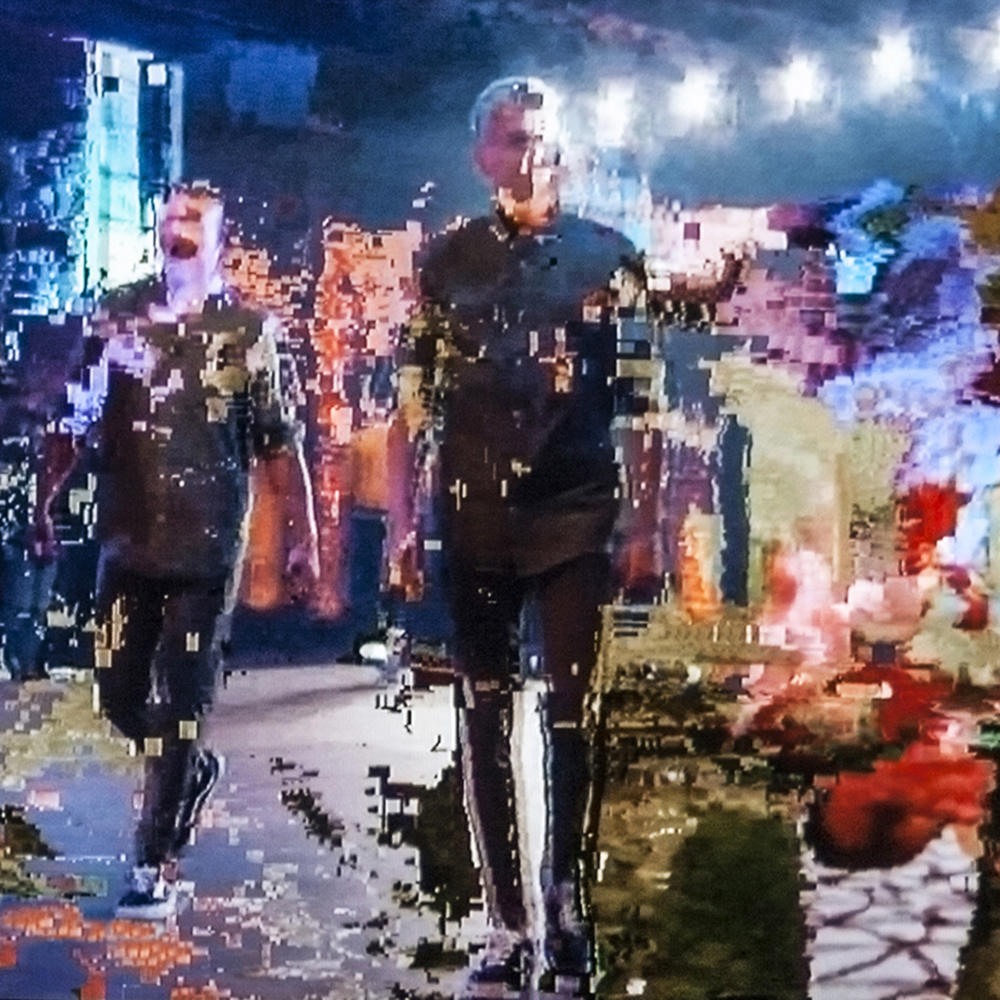 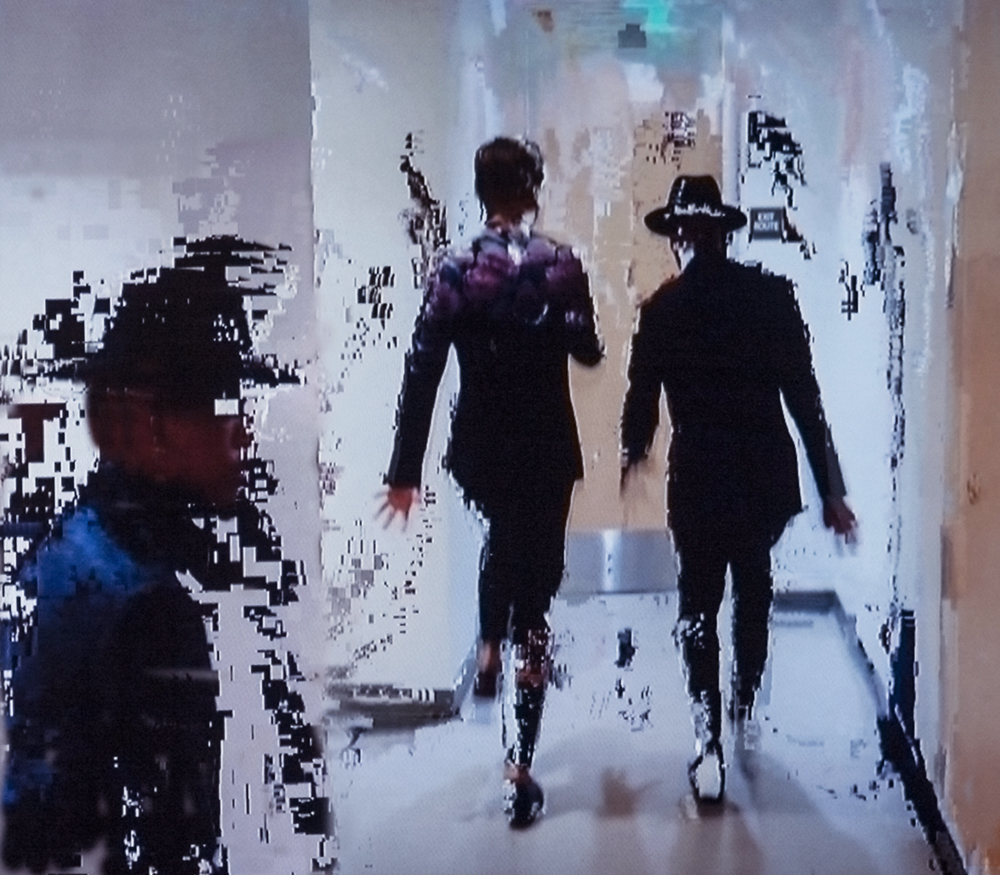