It’s always interesting to see the work that receives awards, gets into exhibitions, and seems to resonate with the movers and shakers in the photo world to understand what is on the forefront of the photographic landscape.  The Silver Eye Center for Photography recently announced the winner of their International Fellowship Award, jurored by Sam Barzilay, Creative Director, United Photo Industries, Brooklyn, NY and was I thrilled to see that the recipient was my long time friend, Diane Meyer.  Tomorrow I will feature the work of Ross Mantle who received Silver Eye’s Keystone Award for a Pennsylvania artist.

Juror Sam Barzilay states: “What led me to Diane Meyer and Ross Mantle in particular, rather than anyone else, is that they presented something different, something I had not seen before,” said judge Sam Barzilay. “All too often we see the same stories, photographers employing the same visual voice, so it’s refreshing – exhilarating even – to see work that stands out and speaks with a new voice, catching us by surprise.”

Diane is the recipient of the $3,000 International Fellowship Award. Selected from 148 worldwide submissions for her series Time Spent That Might Otherwise Be Forgotten, she has created a series of images embellished with cross-stitch embroidery. “Diane’s hand-sewn interventions on her photographs – be they of the Berlin Wall’s absence or family snapshots – force the viewer to consider the images as objects in themselves rather than unalterable representations of memories, places, or moments in time.” commented judge Sam Barzilay. “Her provocative work raises questions about our perception and differentiation of the twin visual worlds of the physical and the digital.”

Diane is an Associate Professor of Photography at Loyola Marymount University and resides in Santa Monica, California. She received her BFA in Photography from New York University, Tisch School of the Arts and an MFA in Visual Arts from The University of California, San Diego. In 2012, Diane was an artist in residence at Takt Kunstprojektraum in Berlin, Germany, and she has been featured in solo exhibitions at the 18th Street Art Center, Santa Monica, CA; AIR Gallery, New York, NY; and The Society for Contemporary Photography, Kansas City, MO. Her art has also been seen in numerous group shows in the United States and abroad, including China House, Penang, Malaysia; Galerie Huit, Arles, France; Project 42, Alkmaar, The Netherlands; The Helsinki Biennale, Finland; NEXT Art Fair, Chicago, IL; and Lennox Contemporary, Toronto, Canada.

I am interested in the failures of photography in preserving experience and personal history, as well as the means by which photographs transform history into nostalgic objects that obscure understandings of the past.

The works presented represent three series, each relating to ideas of memory, nostalgia and trying to make sense of time and place. In these works, sections of the photographs have been obscured by cross-stitch embroidery sewn directly into the photograph. The embroidery deteriorates the original photograph and forms a pixelated version of the underlying image. As large areas of the photographs are concealed by the embroidery, small, seemingly trivial details emerge, while the larger picture and context are erased. 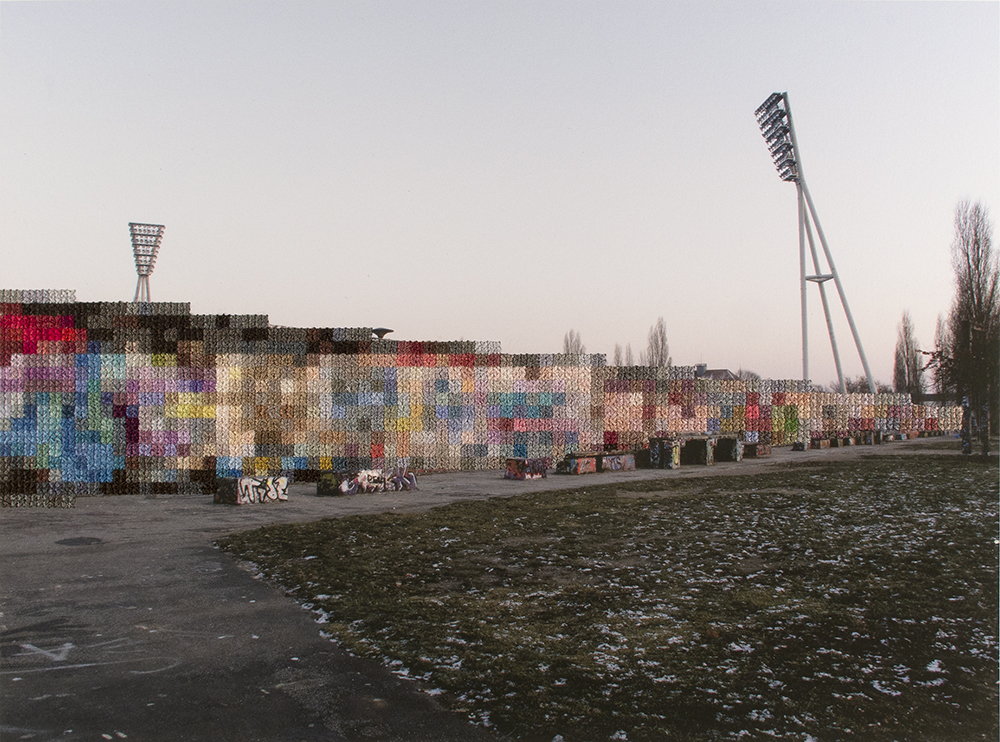 In the Berlin series, the images were taken in the city center as well as in the suburbs, where I followed the former path of the Berlin wall. I was particularly interested in photographing locations where no visible traces of the actual wall remain, but there are subtle clues of its previous existence. These clues include incongruities in the architecture that occurred as new structures were built on newly opened land parcels, changes in streetlights, or newer vegetation. In addition to the physical aspects that point to the former division of the city, I was interested in the psychological weight of these sites and the ways in which past history remains very much in the present. 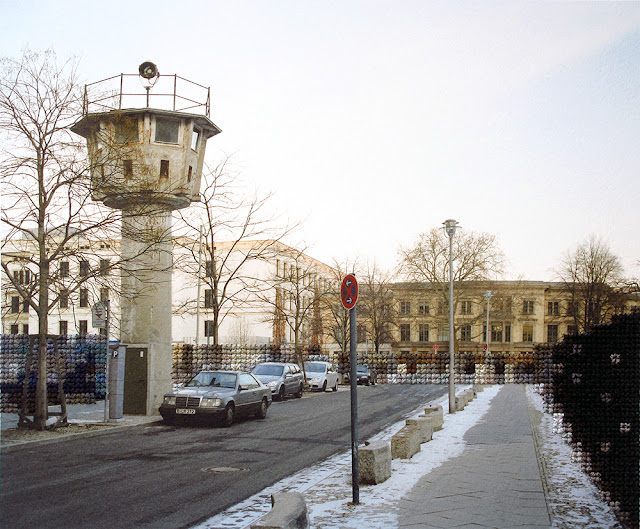 At times, the embroidered parts of the image run along the horizon line, forming an unnatural separation that blocks the viewer from the vantage point of the image. This aspect of the sewing emphasizes the unnatural boundaries created by the wall itself. The domestic act of sewing soft thread provides a literal contrast to the concrete of the wall and a metaphorical contrast to its symbolism. This series is currently in progress and I plan to have a complete set of 30 to 40 images completed by 2014, the 25th anniversary of the fall of the wall. 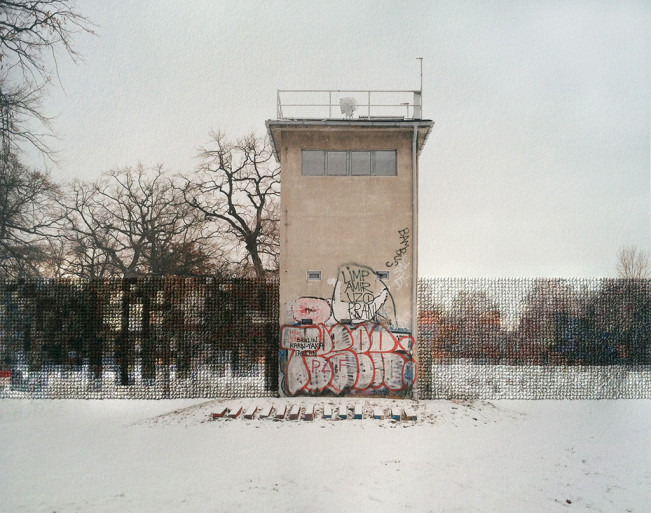 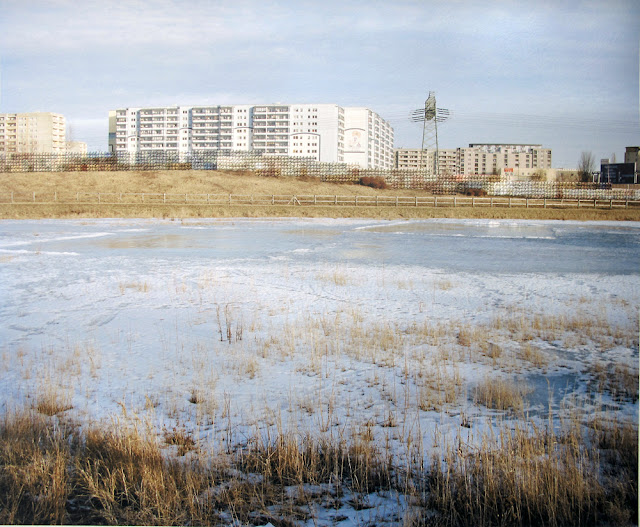 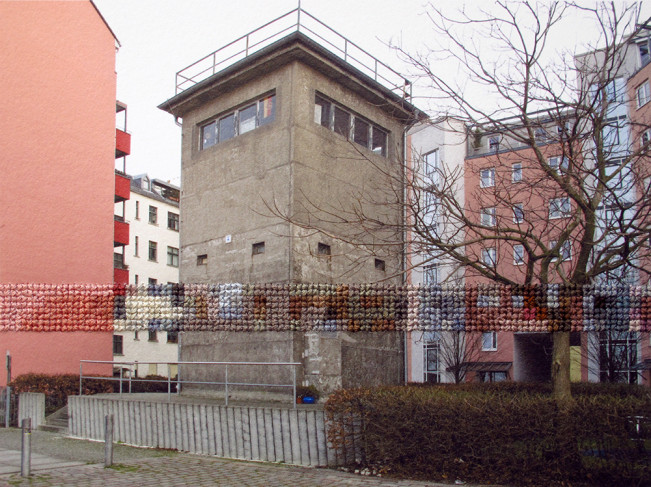 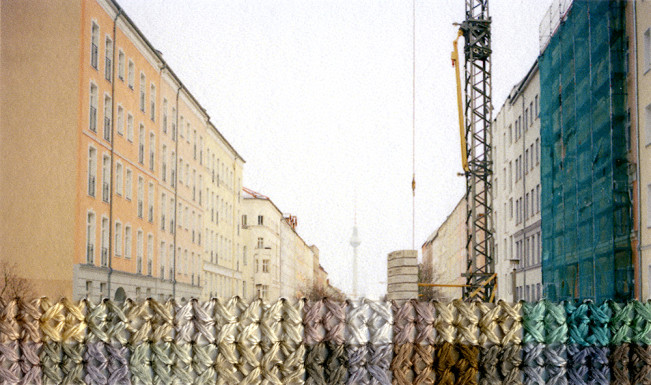 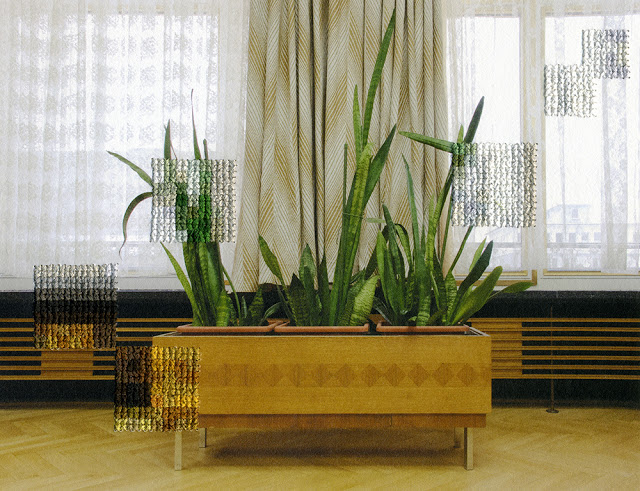 The New Jersey series represents more personal memories. In this series, I was particularly interested in the disjunct between lived experience and photographic representation. The photographs in the series are ones that have formed my own autobiography and are a combination of family snapshots from my childhood and photographs I took in high school of landscapes around where I grew up in New Jersey. By having the embroidery take the visual structure of digital pixelation, I wanted to make a connection between the human brain trying to retrieve information and digital storage. The tactile, hand-embroidered overlay not only relates to the digital aesthetic, but also hints at the growing trend of photos remaining primarily digital—stored on cell phones and hard drives, but rarely printed out into a tangible object. 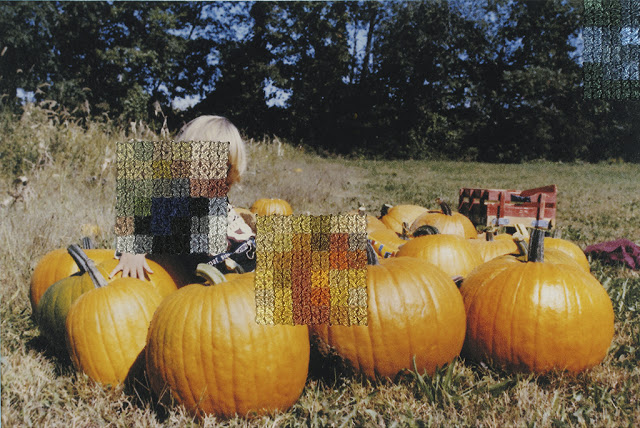 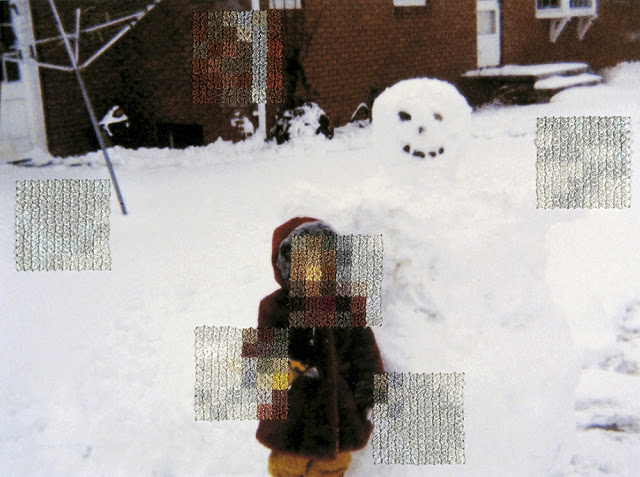 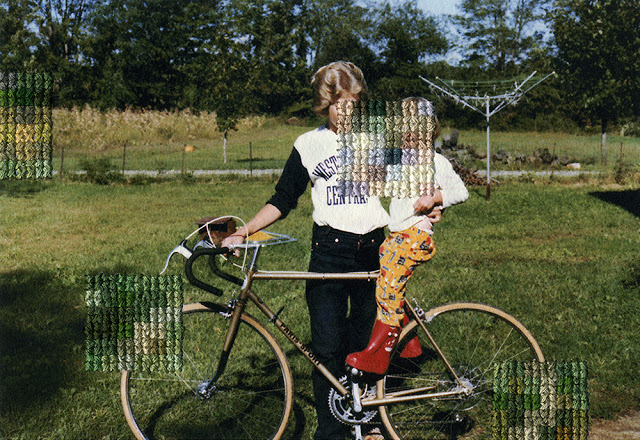 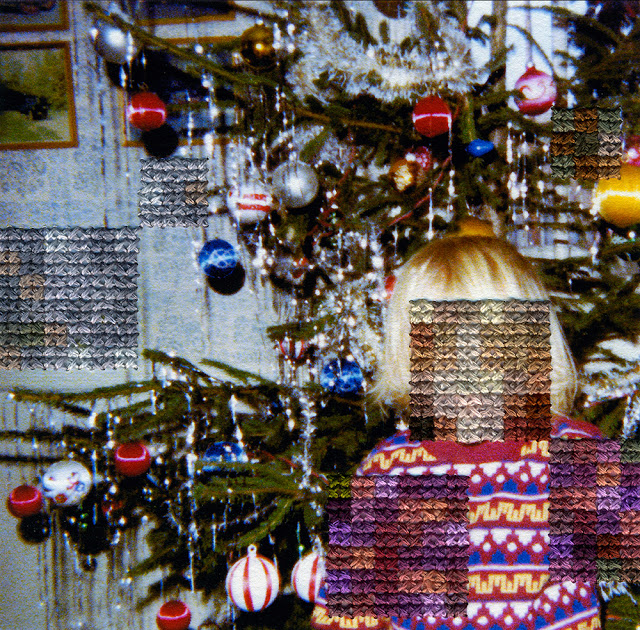 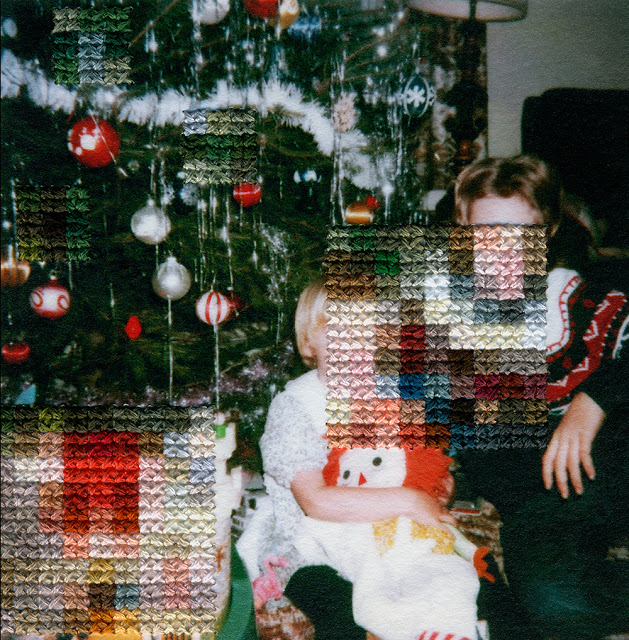 The final series of landscapes are an offshoot of the New Jersey series, taken during various significant phases of my life. The repetitive action of cross-stitching becomes a futile attempt to make the fleeting memories of life permanent and ingrained. This series is also in progress and will ultimately function as an archive of various experiences arranged by location. 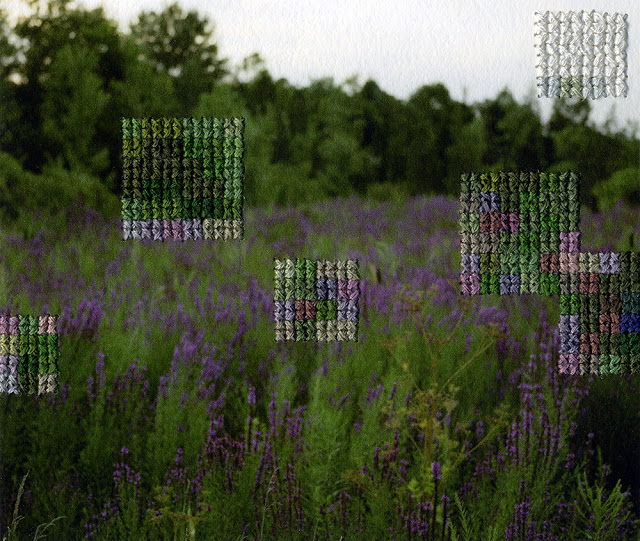 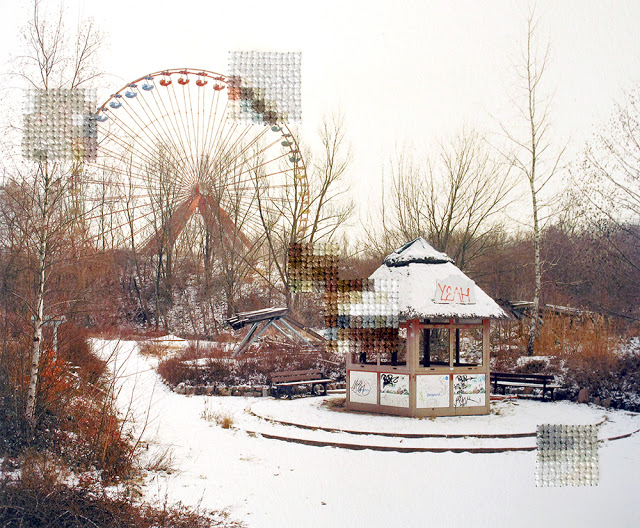