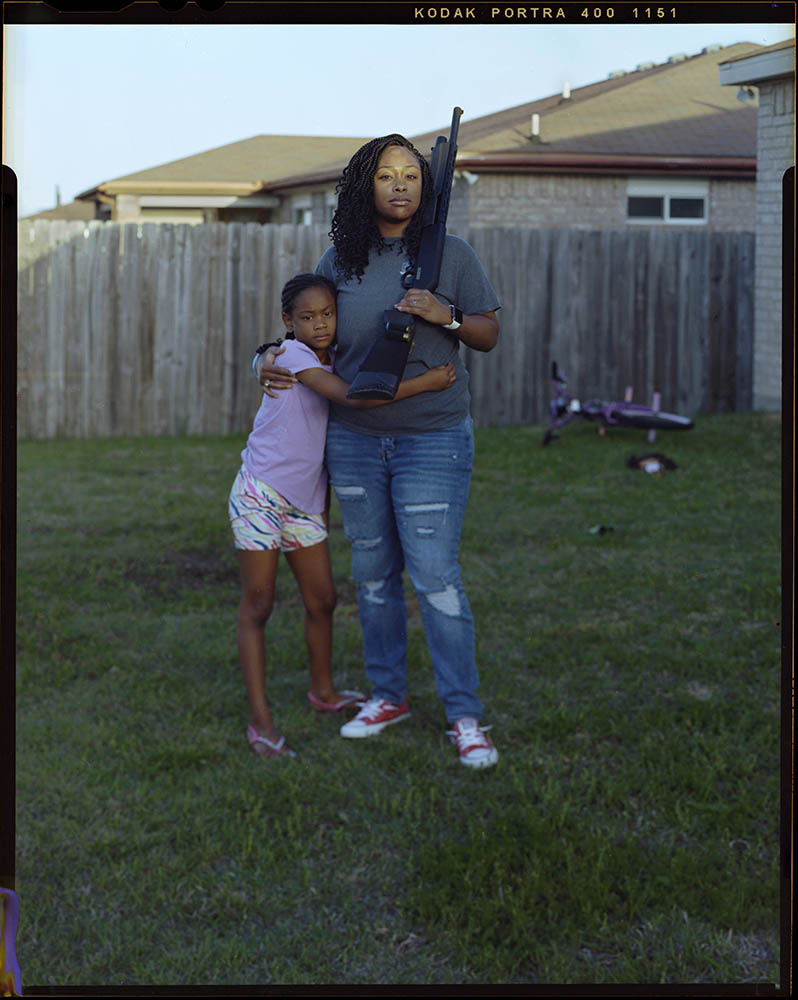 ©Christian K. Lee. Damillah Lane, 26, is embraced by her daughter Skylar Lane, 8, as she holds her firearm outside of her home on Saturday, April 10, 2021 in Killeen, Tx. “Whenever my husband leaves I feel a need to protect my family,” Damillah said.

When I conjure up images of Black Americans with guns, I am reminded of photographs of Black Panther members in black leather jackets and berets, on the capitol steps in Washington state, holding rifles and shotguns to protest a gun-control bill that would make it a misdemeanor to exhibit firearms or other weapons in a manner manifesting intent to intimidate others. I also think about rap artists like TuPac or Ice Cube wielding fire arms in their promotional imagery. But I can’t think of any photographs of everyday Black Americans with guns. Photojournalist Christian K. Lee has created a new project, Armed Doesn’t Mean Dangerous, featuring portraits of ordinary people holding their guns and the commentary as to why they were purchased. As he states, “The point of this project is to recondition myself, and others, toward the more positive view of Black people and guns: to promote a more balanced archive of images of African Americans with firearms by showing responsible gun owners — those who use these weapons for sport, hobby and protection. I hope these photos bring that important point into focus.”

Christian K. Lee is a Photojournalist based near Austin, Tx. He was born in Chicago, Illinois. His experiences in that city shaped the way he looks at the world. It’s a city known for violence but as a photographer he was able to create beauty there. Lee states that in order to capture something as beautiful you must first see it as beautiful. He explains that he uses his camera as a tool to gain understanding about people. He’d rather make an image that allows people to have a deeper understanding about a situation rather than a pretty photo. He’s a self taught photographer who explains that he has refined his craft through experience. In his experience that’s the best way to learn. 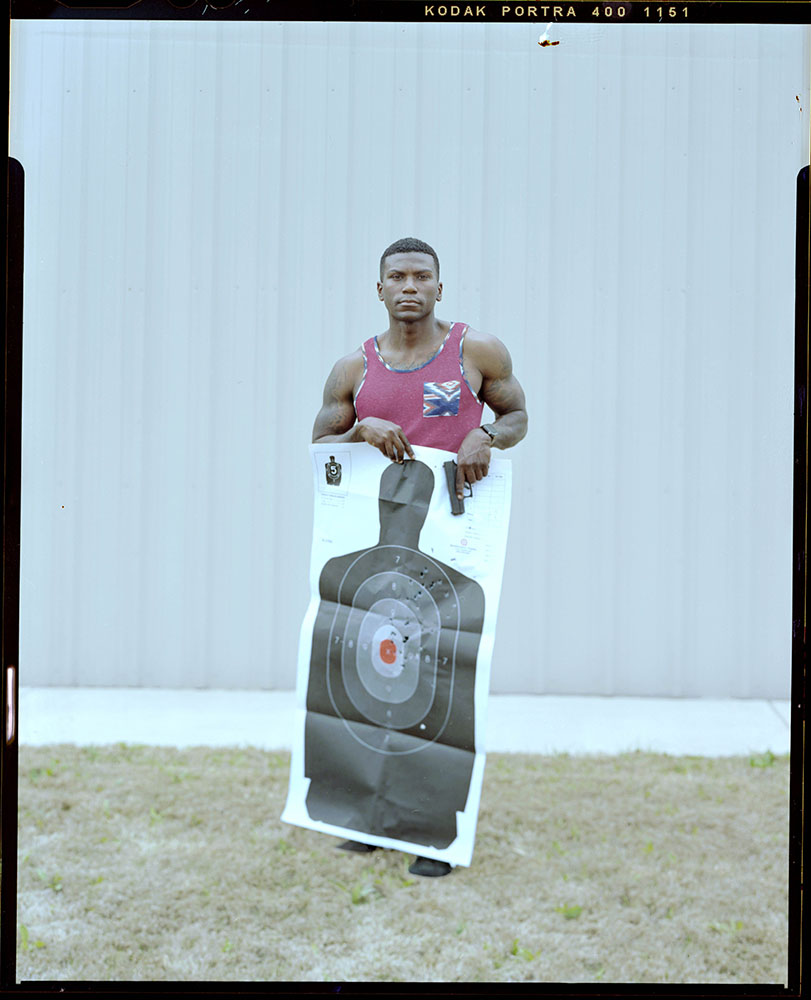 ©Christian K. Lee, Lindberg Wilborn, 32, stands holding the target he used to qualify for his license to carry outside a local gun range on Saturday, March 27, 2021 in Killeen, TX. He has owned his firearm for about 3 months. “Society looks at black men as predators and scary people so most of us are scared to own a firearm in fear of fueling the fear that already exists,” Wilborn said.

Growing up in Chicago, I routinely saw negative portrayals of African Americans with guns: Black men there and in the rest of the country were associated with gangs and criminality, and guns were always deemed dangerous in their hands. But at home, I saw a positive, responsible side of firearms ownership: My father was an Army veteran and a police officer. I became a gun owner myself — one of the 24 percent of African Americans who report owning guns, according to Pew Research Center. They, like me, are comfortable exercising their Second Amendment rights.Gun Rights in the United States is a constitutional right, just as freedom of speech.

However my ancestors did not have access to the freedoms I have today in America. History shows us when African Americans assert certain rights they are infringed upon. This fact was witnessed in 1967 with the introduction of the Mulford Act. It was a California bill that targeted members of the Black Panthers who were exercising their rights to open carry. As a photojournalist without the freedom of speech I essentially cannot practice my craft. In the same light in order to fully be an American in my eyes I feel a deep passion to exercise all of the rights granted to me including my Second Amendment rights.

The point of this project is to recondition myself, and others, toward the more positive view of Black people and guns: to promote a more balanced archive of images of African Americans with firearms by showing responsible gun owners — those who use these weapons for sport, hobby and protection. I hope these photos bring that important point into focus. 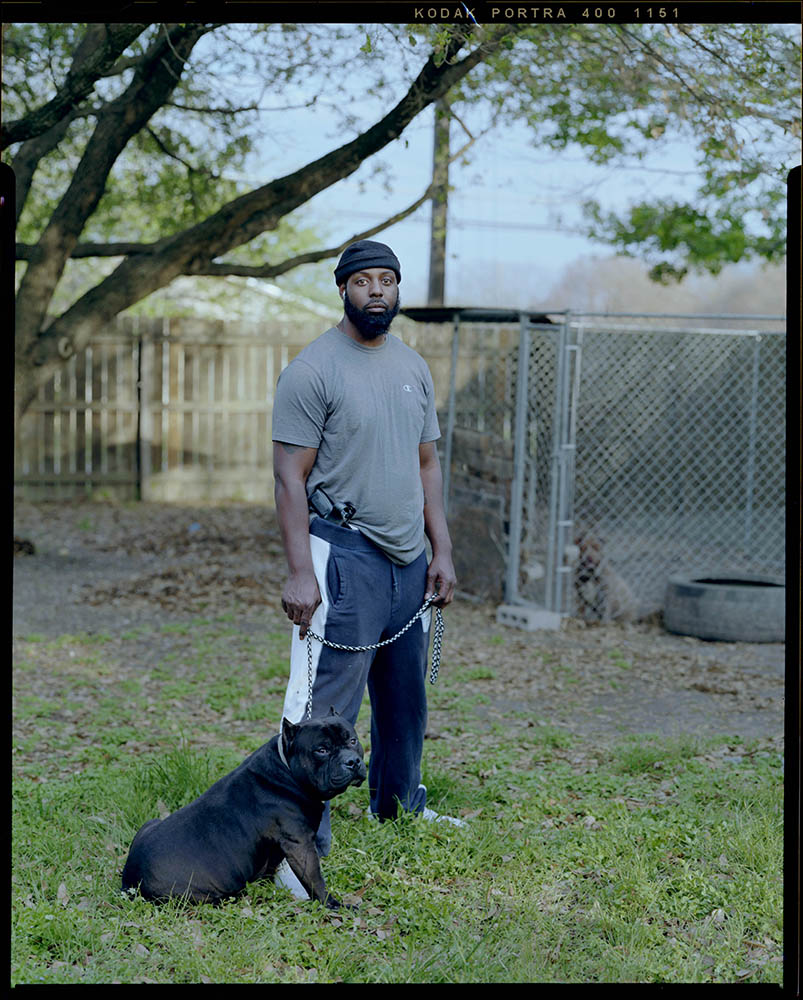 ©Christian K. Lee, Marvin West, 39, holds his dog outside of his home with his firearm positioned on his hip on Monday, April 06, 2021 in Killeen, Tx. “It’s more to the picture than what you see,” West said. People often judge him based on his appearance. He mentions that those people would be surprised to know that he’s an educated business owner that holds a Masters degree.

Your earlier project was about interrupted Prom experiences during covid, how did you pivot to this subject?

Once I moved to Texas I knew that it was only a matter of time before I documented guns. As a creative I didn’t point my camera in that direction for many months because I didn’t feel that I could bring a unique voice to the conversation. Until I began to think about how vastly my experiences with guns were in Chicago as compared to Texas. In Chicago guns were typically the source of killings and gang violence but in Texas I saw how people used them to protect their family and for sport. They are clearly two different cultures. Those pondering of thoughts is what ultimately lead to the creation of the project. 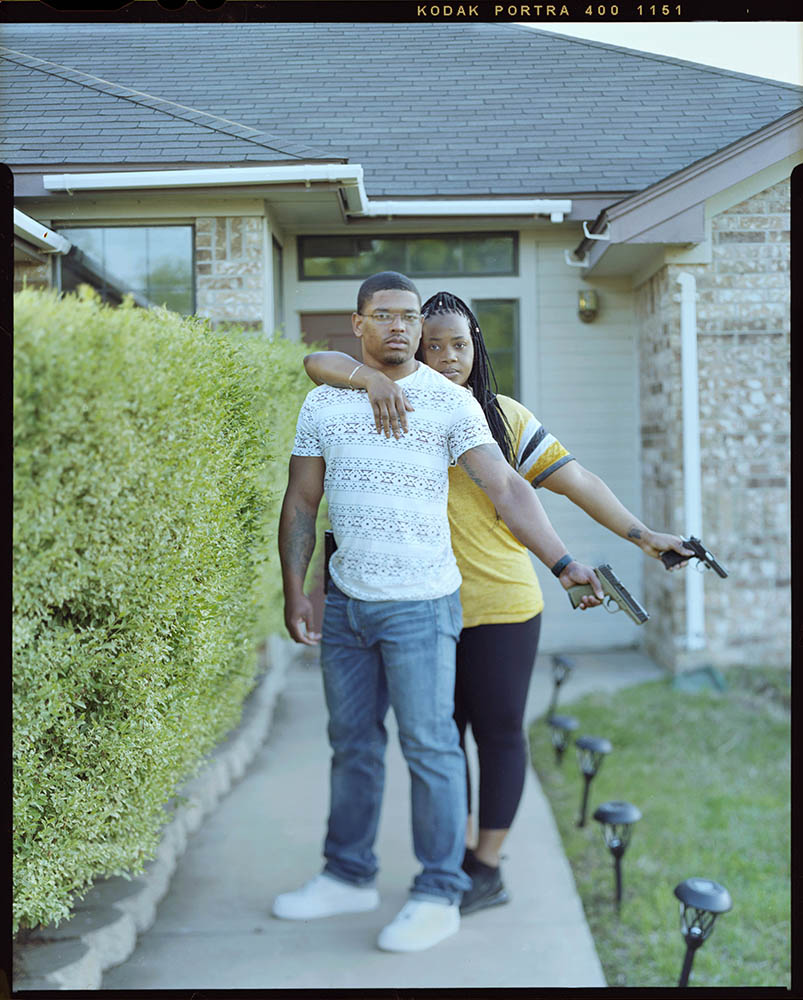 ©Christian K. Lee, Jamyce Brown, 29, right, embraces her husband Keon Brown, 27, outside of their home on Sunday, April 18, 2021 in Killeen, Tx. “In my hometown introducing a child to a gun may be potentially setting them up for failure,” Chicago native Jamyce said.

How did you find your subjects?

This was the hard part. I literally didn’t know anyone that were gun owners when I started. So I had to place myself where I could find owners. I began hanging out at local gun ranges and stores until people would talk to me. I always tell people that the most awkward conversation I had was walking in a gun store where I saw no people of color and asking “Hey do you know any African American gun owners”. That is however how I began the project. 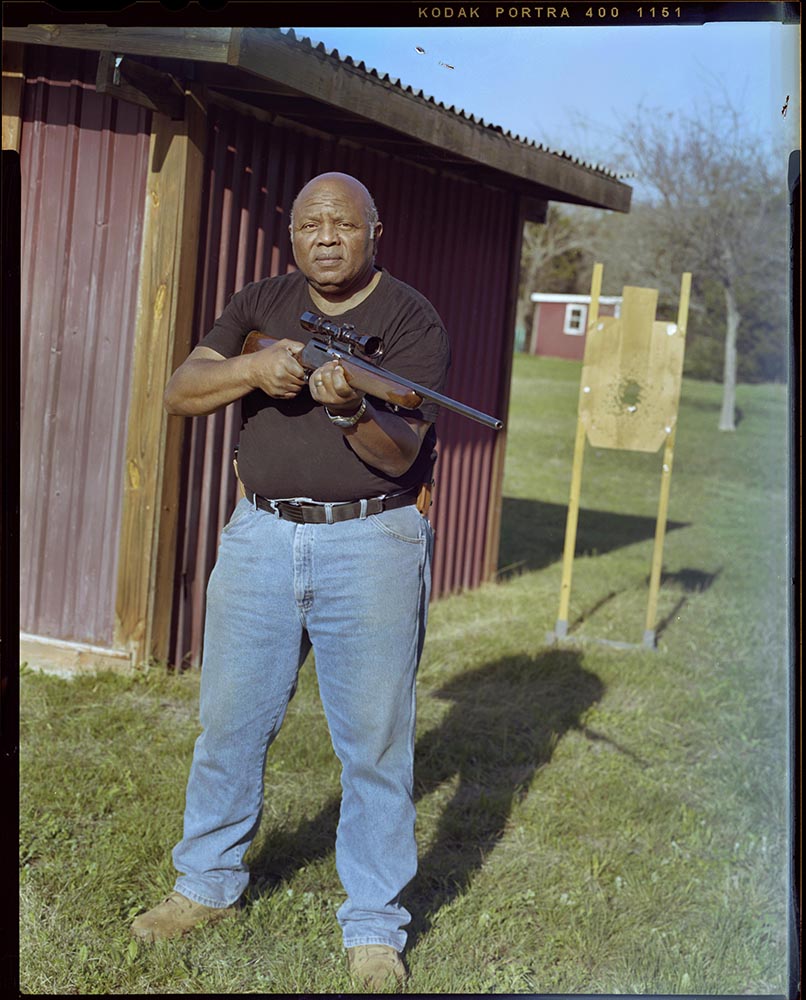 ©Christian K. Lee, William Wilson, 64, postures his rifle near a gun range in his friends backyard on Sunday, March 21, 2021 in Copperas Cove, Tx. Wilson has over 45 years of gun experiance. He spent 21 years in the military, 22 years as a police officer and currently serves as a sales clerk at a local gun store. “The problem with big city policing is that a black man with a gun ia a threat, they’ll probably shoot me before they find out im a retired police officer,” Wilson said.

This is a compelling project, what did you take away from creating these portraits? 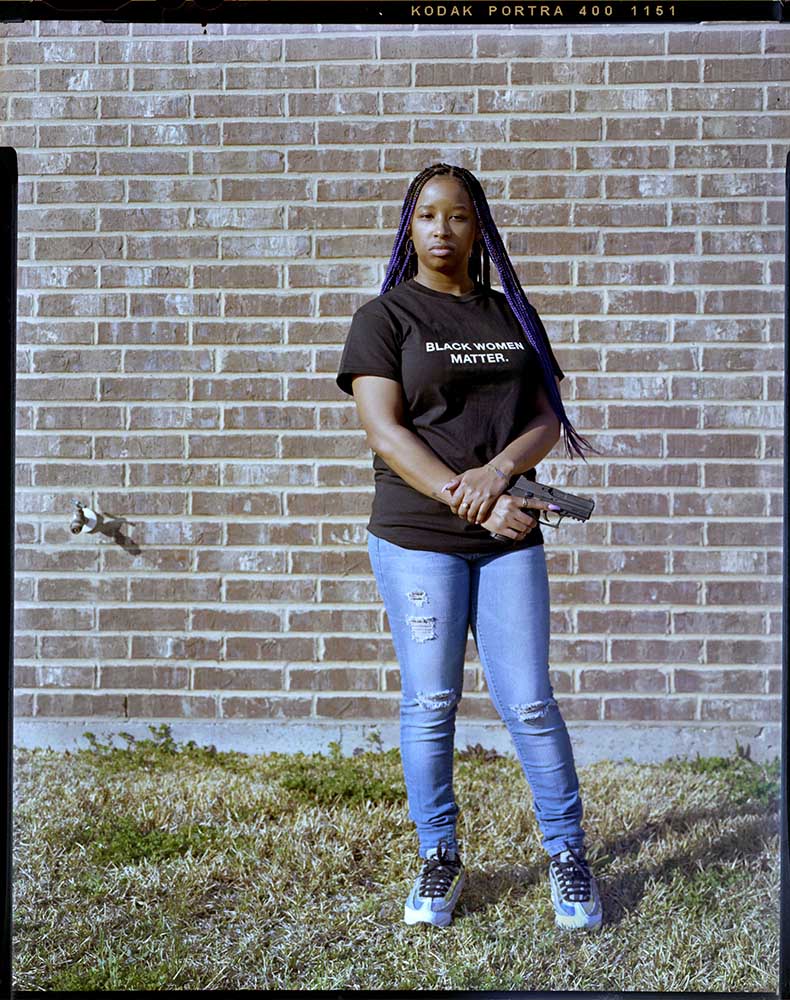 ©Christian K. Lee, Brittney Saunders, 28, holds her firearms outside of her home on Friday, March, 05, 2021 in Killeen, Tx. “Why can other races have assault rifles and machine guns but if black people have a handgun we are considered a threat,” Saunders said.

Did it change your notions of gun ownership?

Yes! Growing up I knew I always wanted to own a gun especially in a city like Chicago but I waited many years to buy one because frankly speaking it is so many negative opportunities to use it in the city. So as a precaution I decided not to own. However that fear put me behind children here in Texas who learn gun safety at a very young age. I felt cheated. I felt like I was not being allowed to take part in a piece of the American dream. Sure I learned about Freedom of Speech and I exercise that fully as a Photojournalist but what good is that freedom if I can’t protect it against those who choose to do me harm. 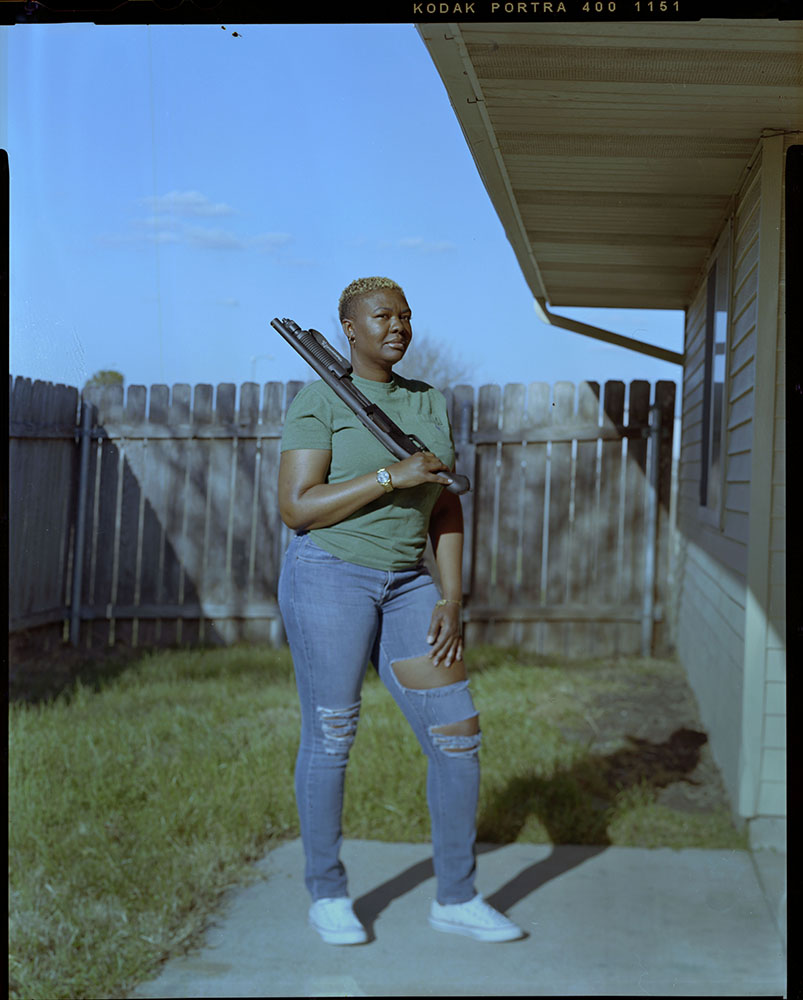 ©Christian K. Lee, Asia Wragg, 35, holds her firearm outside of her home on Wednesday, March 10, 2021 in Fort Hood, Tx. “As a single woman with children my priority is to protect and defend my family,” Wragg said. 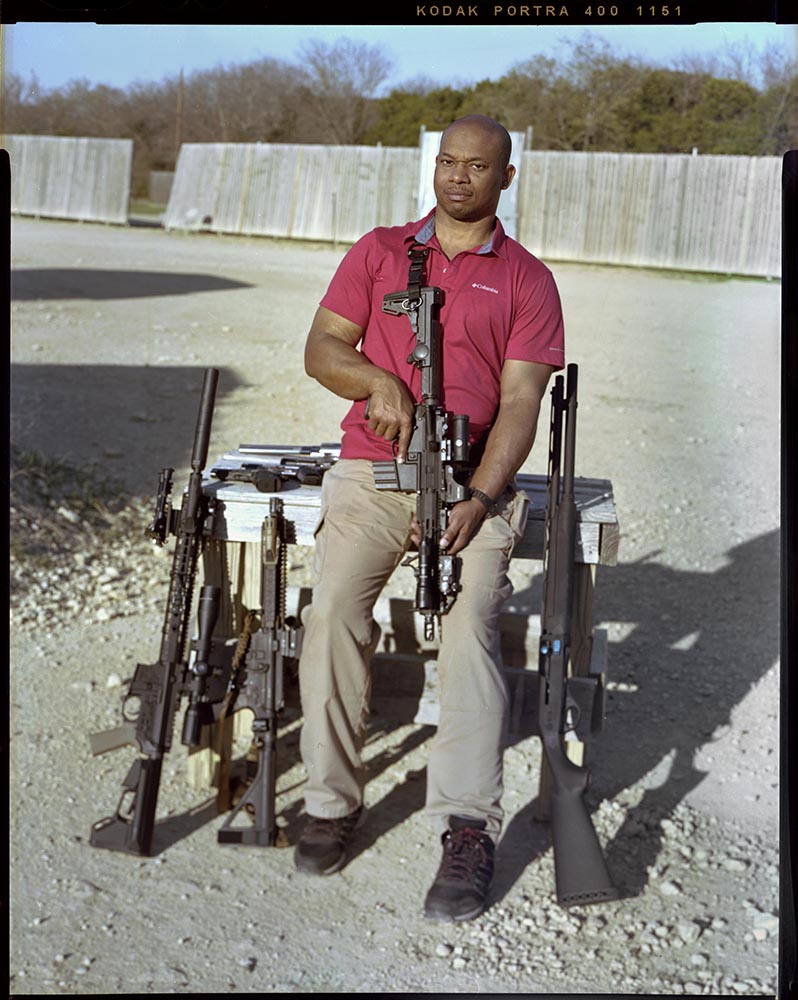 ©Christian K. Lee, Datrelle Black, 46, is seen surrounded by his firearms at the Texas Star Shooting Gun Range on Saturday, March 20, 2021 in Kempner, Tx. “Total avoidance of guns teaches fear we should teach our children about gun safety,” Black said. 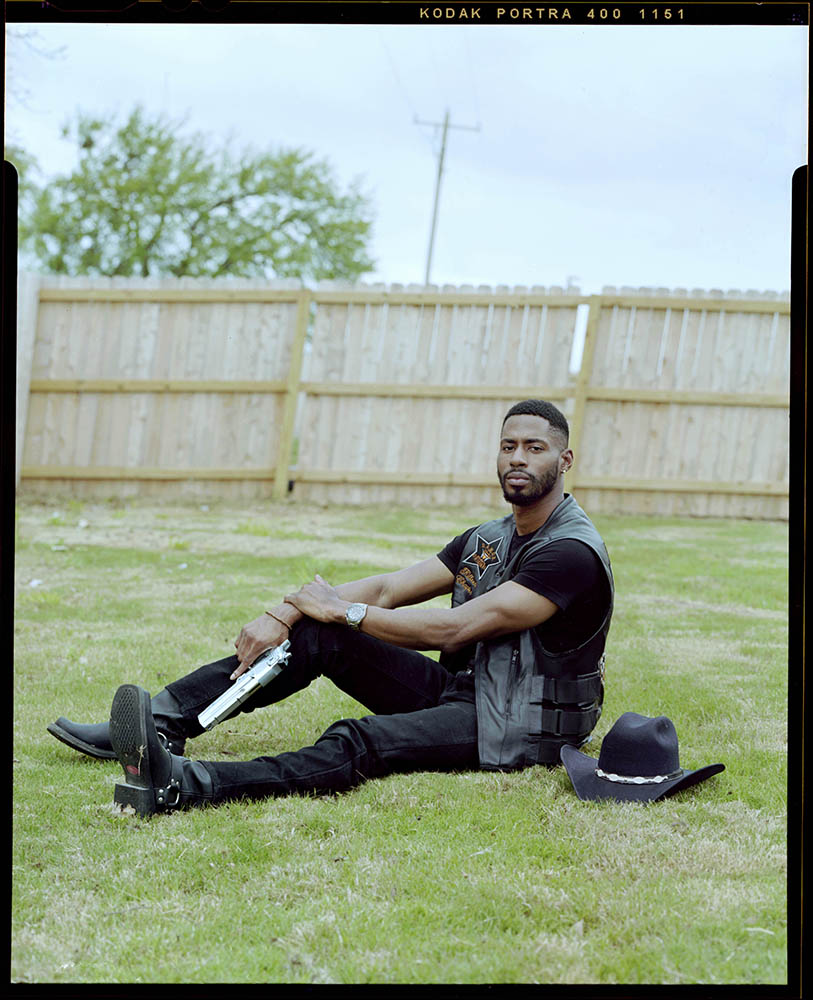 ©Christian K. Lee, Devin Meadows, 29, holds his firearm outside of his home on Tuesday, April 06, 2021 in Copperas Cove, Tx. “We as Africans Americans have been deprived of so many rights so why not take advantage of the ones we have,” Meadows said. 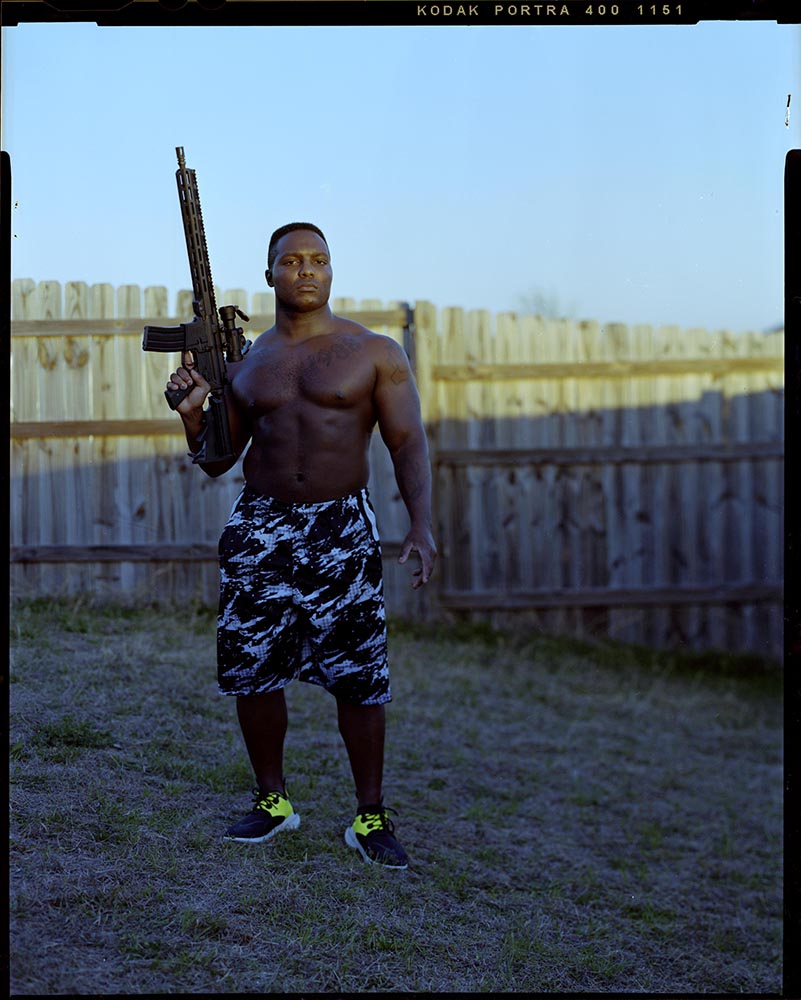 ©Christian K. Lee, Ron Harris, 32, postures his firearm in his backyard on Tuesday, March 2, 2021 in Killeen, Tx. “I own it to protect my family because I cant afford a loss,” Harris said. 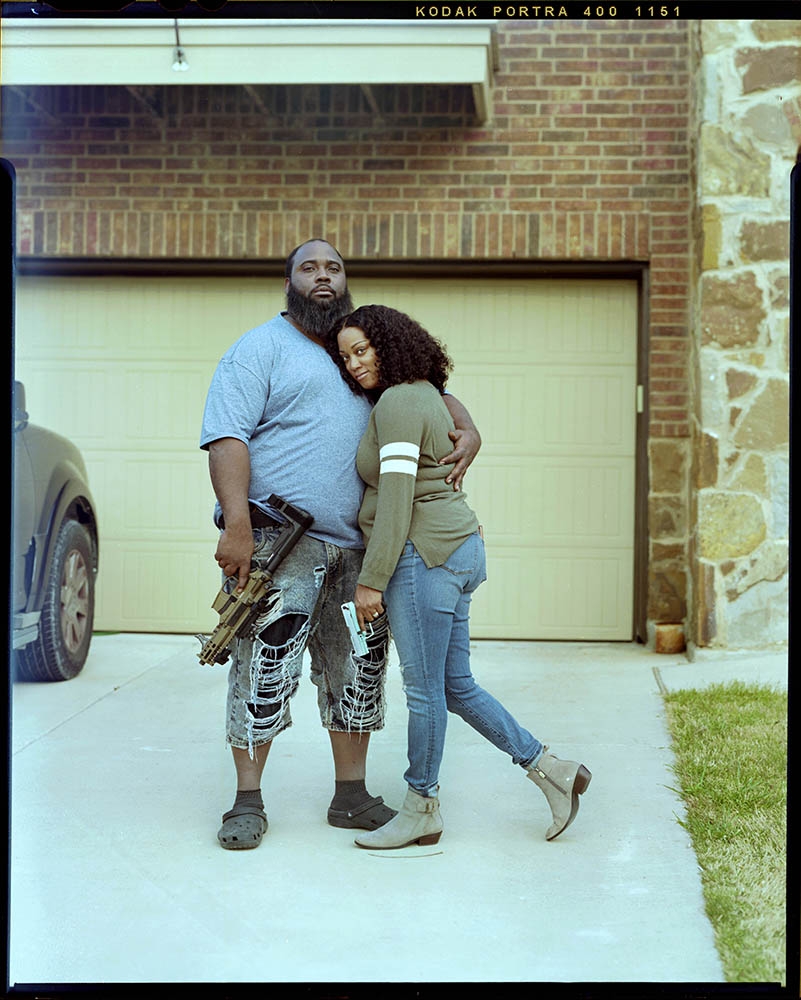 ©Christian K. Lee, Tylissa Frazier, 38, right, is embraced by her husband Kenneth Frazier, 35, outside of their home as they hold their firearms on Saturday, April 3, 2021 in Temple, Tx. “We get pulled over a lot so having a license will show that we are law abiding citizens,” Tylissa said. 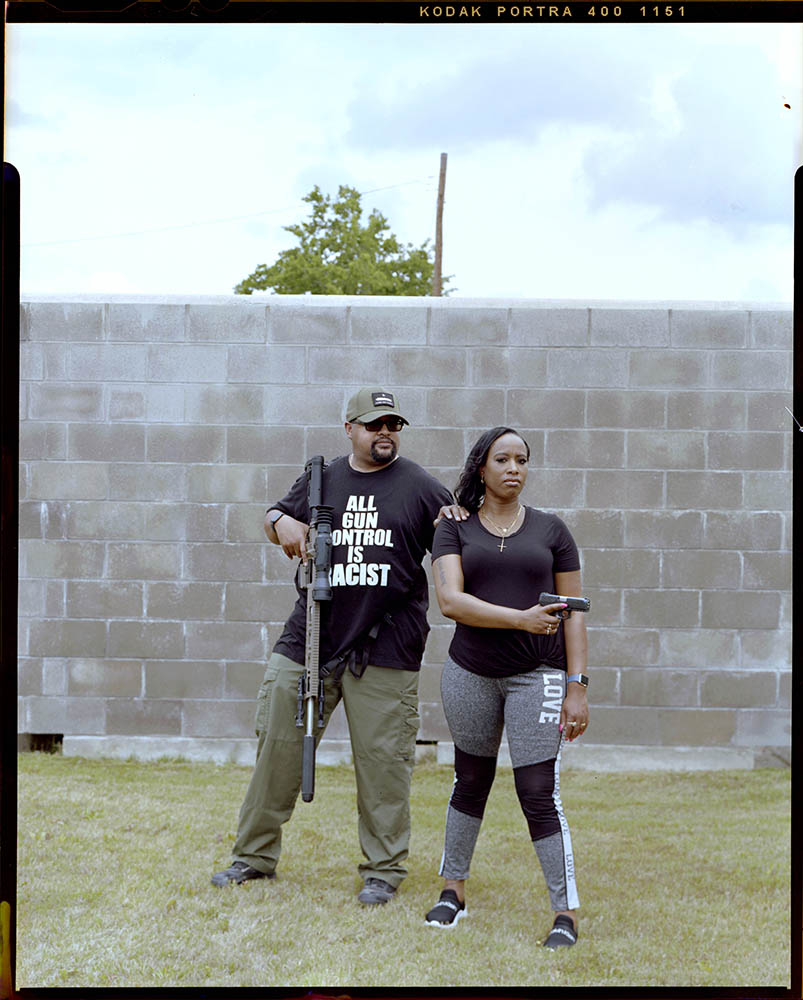 ©Christian K. Lee, Trina’ Duncan, 39, foreground, postures her pistol outside a local gun range after training with her pastor Andrew Long, 46, on Saturday, May 16, 2021 in Killeen, Tx. According to the Pew Research Center Women are less likely to own a firearm compared to Men. “I have been in moments that would not have occurred if I was a guy,” Duncan said.

NEXT | Debbie Miracolo: Imagined Moments from the Porch >
< Carl Corey: The Strand | PREV