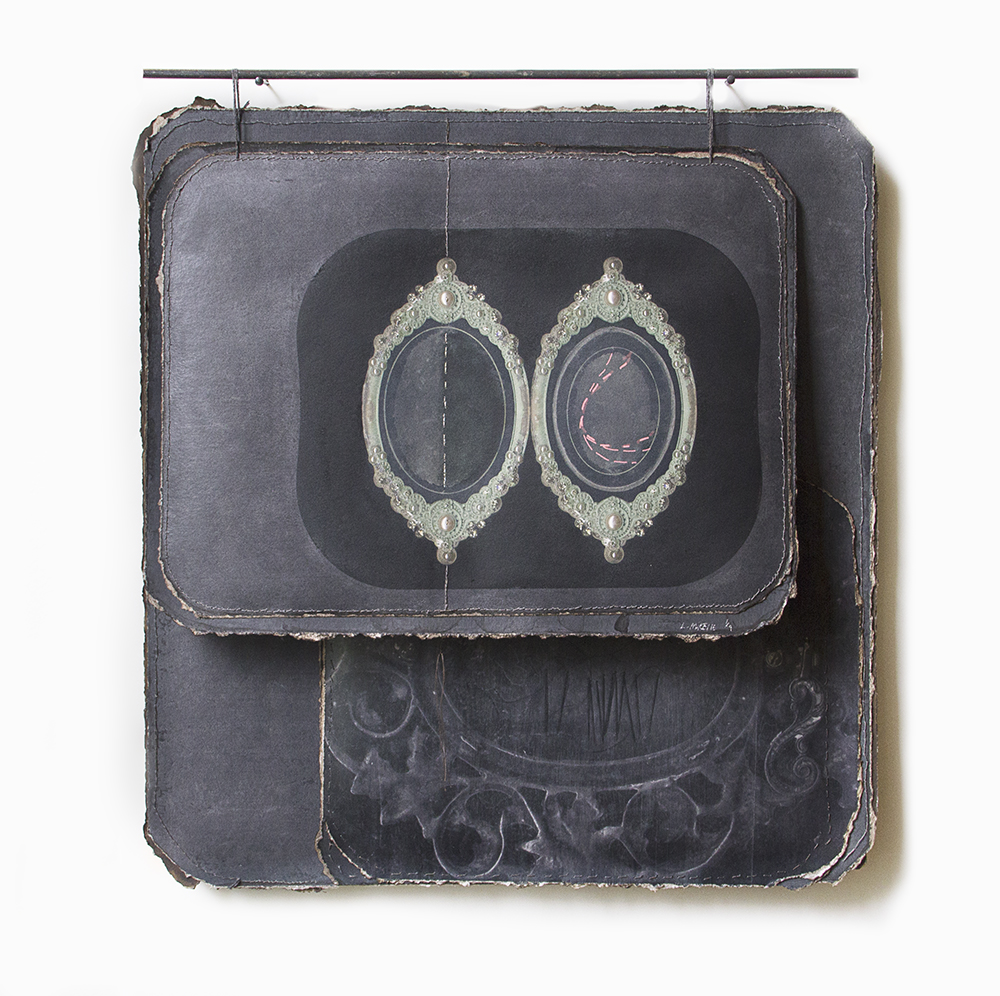 Before, After, And In Between no. 1 and 2, L. Mikelle Standbridge©, I started to photograph “Singorina F” before she got breast cancer. After she was diagnosed, she no longer wanted her image to be public. So her image is literally sewn in between, enclosed in the pages, protecting her privacy, but still honoring her presence, even though, or maybe especially now that, she has passed away. Rest in peace, my friend.

Earlier this spring, I had a chance to meet Milan-based photographer, L. Mikelle Standbridge, through the Los Angeles Center of Photography portfolio reviews. Her series, Photo- Bodies, challenges our concept of photographic presentation, through enhanced surfaces, hand stitching and 3D installations. Though fragile, the work has a weight and a sense of permanence. Much of the work focuses on the female body and the experience of cancer told through constructions.  Standbridge states “I am profoundly interested in Photography and this interest informs my subject matter and presentation choices. This series, Photo-Bodies, is in part dedicated to what has probably been photography’s most astounding characteristic and that is – in the form of portraiture or a “likeness”- having the uncanny, powerful potential of alluding to the non-visible, to an emanation (such as a personality, a soul, or an aura of a person). By photographing people, especially people who have undergone alterations to their bodies or whose lives are dominated by their appearance, my body of work hovers around the question of physicality (what it might reveal, what it might cover-up).”

L. Mikelle Standbridge grew up in Southern California, received her B.F.A., with an emphasis in Photography, from San Francisco State University.  During her studies, she integrated 3 years in France to study French, darkroom printing, and Art History. She was then awarded a scholarship to the Univ. of Chicago, where she obtained her M.F.A (1996) in Photography.  Upon graduating, while teaching photography in Chicago at Columbia College, she met her to be Italian husband and moved to Milan in 2000. She is now represented by the Milan gallery Gli Eroici Furori – Arte Contemporanea.

Standbridge also offers an artist residency in the northern Piedmont hills of Italy. 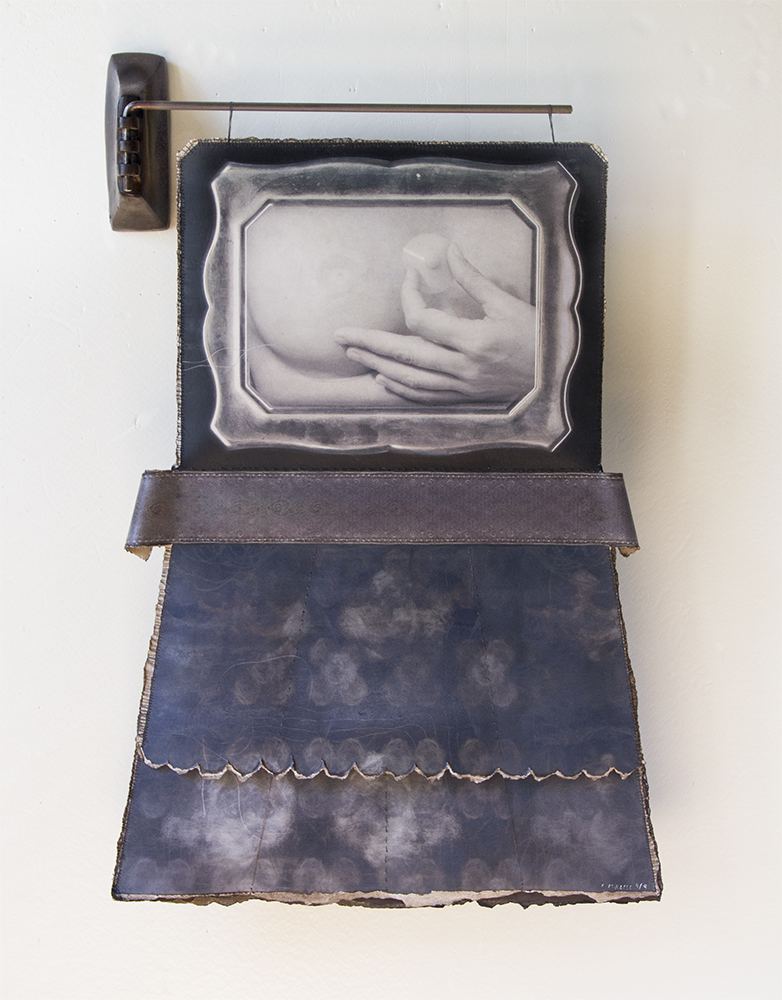 Missing Nipple, L. Mikelle Standbridge©, When undergoing a breast reconstruction after removing a tumor, the surgeons aren’t always able to save the nipple, and plastic stick-on shapes exist for this reason. Like a metonym (a part that stands for the whole), women’s sensuality or entire worth as a woman often gets confused by the presence or absence of their “female parts”

I am profoundly interested in photography and this interest informs my subject matter and presentation choices. This series, Photo-Bodies, is in part dedicated to what has probably been photography’s most astounding characteristic and that is – in the form of portraiture or a “likeness”- having the uncanny, powerful potential of alluding to the non-visible, an emanation (such as a personality, a soul, an aura of a person). By photographing people, especially people who have undergone alterations to their bodies or whose lives are dominated by their appearance, this body of work hovers around the question of physicality (what it might reveal, what it might cover up).

Also intriguing to me is the way we have viewed photographs. The presentation of photography has a long history with surfaces (both with the negative and the print), from paper negatives, silver coated copper, tin, glass plates, film, and albumen paper, gelatin-silver paper, and now ink jet pigments on digital paper. This later, digital photography paper, has a strong material presence due to the ‘grammage’ (paper density) and the 100% cotton, pliable base. Today’s paper may be said to offer a carnal presence because it is pulpy, absorbent, flexible, scratchable, tearable, pierceable, stitchable, dyeable, waxable – all characteristics that lend themselves to a concept of “body”.

As an experimental inquiry into representing embodiment, as limited editions but nevertheless one-of-a-kind photo-sculptures, the works vary in size and depth, ranging from a few centimeters to a few meters and vary equally in style, potentially being wrapped, tied up, warped, folded, or stuffed. Certain pieces are also designed to have changeable positions and interchangeable parts. All of them are very delicate and often hand stitched. Notwithstanding the fragile nature, a patina is rigorously applied, reminiscent of burnished leather, permitting the paper work to be viewed without a glass covering. This direct presence, this immediacy, this invitingly tactile quality, is a key part of the “Photo-Body” concept.

There is a muted, quasi-monochromatic palette which seems to behold as holy the crepuscular years of the medium’s invention in the early 1800’s.  Yet, given the manipulation of the materials paralleled by the subjects’ counter culture body manipulation or latest surgery, the work is a mix of retro-contemporary. 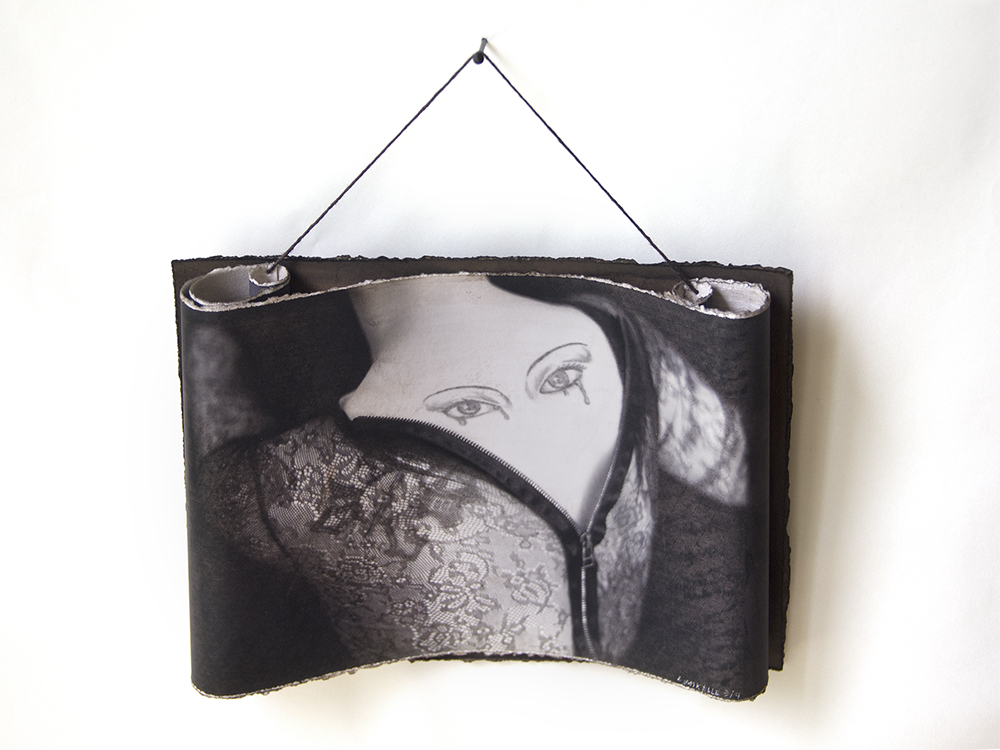 Body Bag (keeping the oblivion of death at bay), L. Mikelle Standbridge©, This work is about a story of two 18 year old girls, best friends, who were laughing to the point of tears. One of the two girls died on the spot, possibly from heart trouble that no one knew she had. The surviving friend put a tattoo on her back of her deceased friend’s very distinctive eyes. This gesture keeps the body bag from closing definitively over her friend and memory. 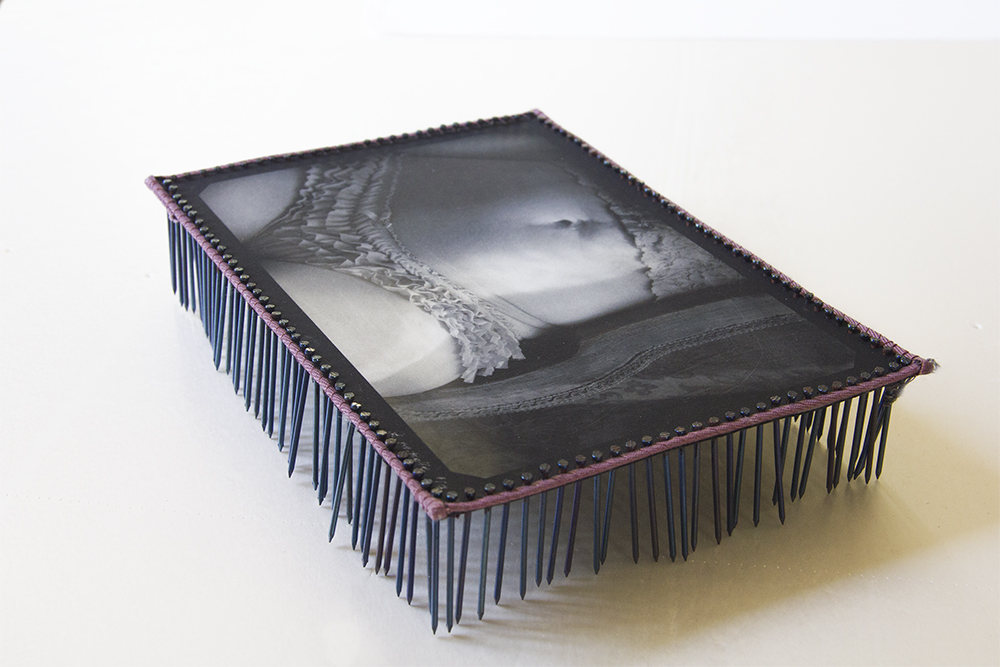 The Big Heart In The Little Girl, L. Mikelle Standbridge©, When Signorina D was an eight year old little girl, with an enormous need for love and attention, she would bear-hug adults and literally lift them off the ground. She ended up being operated on for hernias. Nails represent an element that moves through, that creates a passage, a passage from one space into another – from the outside to the inside or from the inside to the outside. Nails are connectors, connecting and holding together two realities, such as the spiritual with the physical. Nails are also the symbol of pain, such as nails on the cross, but a pain that also alludes to a crossover, when suffering transforms into recognition, acceptance, adaptation, bliss. 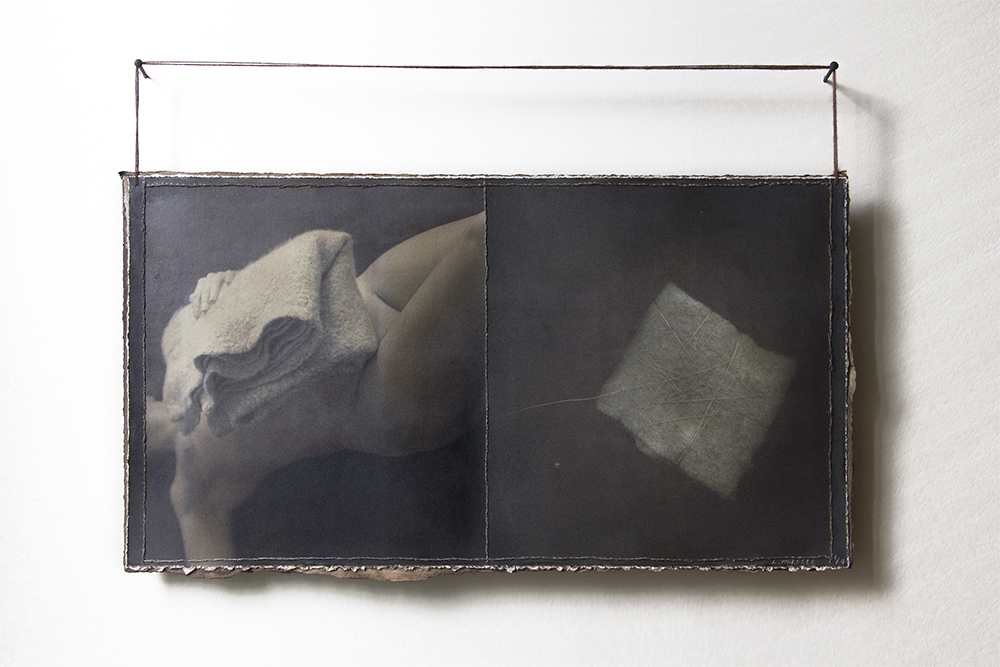 Wool and Womb, swollen bellies, L. Mikelle Standbridge©, Pregnancy is an everyday event only from a statistical point of view, but for the woman involved, it can be life changing. This woman chose pregnancy over everything — over social acceptance and her family, over her relationship, over financial security, over her slim, athletic body. Alone with her choice and her pregnancy, the days were long, lonely, and fraught with physical complications where she was required to lay down with wool on her belly for 6 months and await a cesarean. The solitary days of the countdown were marked by a communion and conversation with the new, small voice growing inside of her. 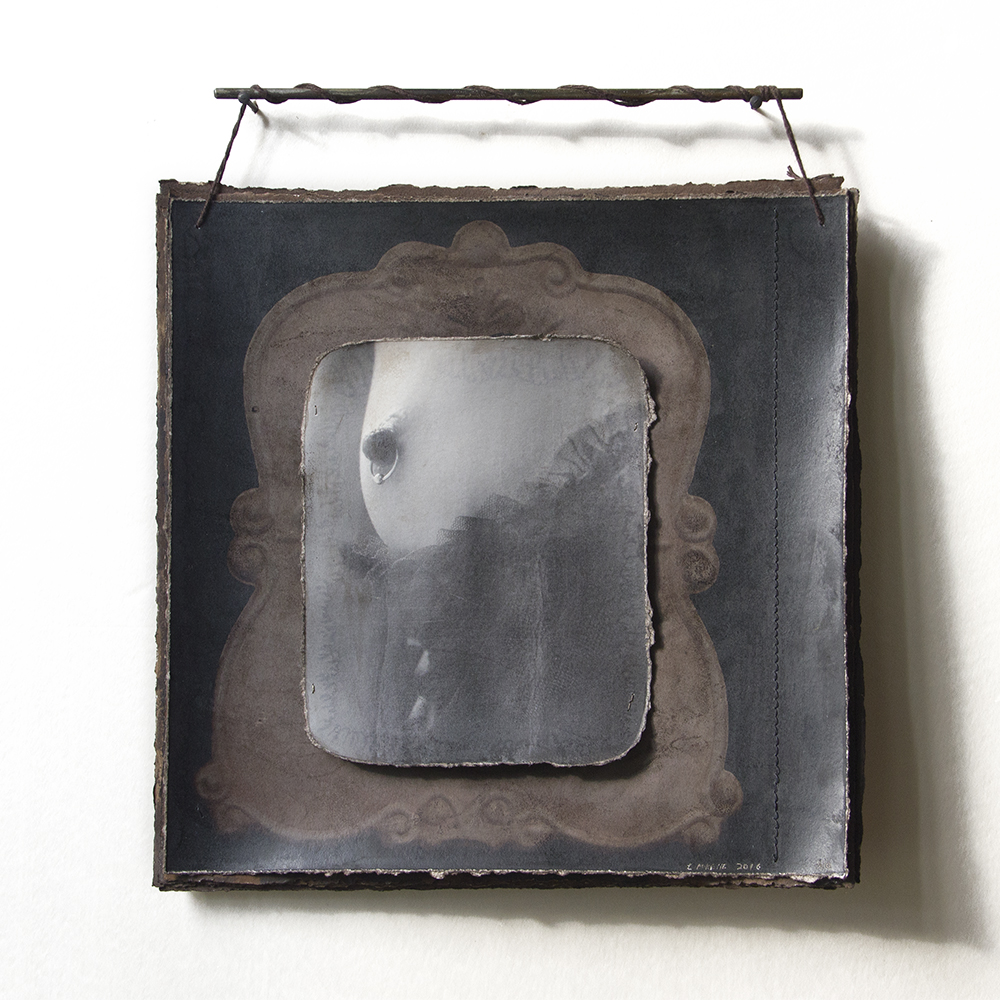 Small Brain Tumor, L. Mikelle Standbridge©, I set out to photograph this young woman because she had nipple piercings. But during our shoot, she explained that she couldn’t work any longer as a model because she had a small brain tumor that affected her equilibrium. I felt that that was a part of her, and I realized the power of a title of an artwork in relation to the image. Once her condition is known you can’t isolate a body part and see only sexual or sensual – the viewer has to integrate erotic with the overall health of the person, sexy with complexity, or the aesthetic with the “ugly”. 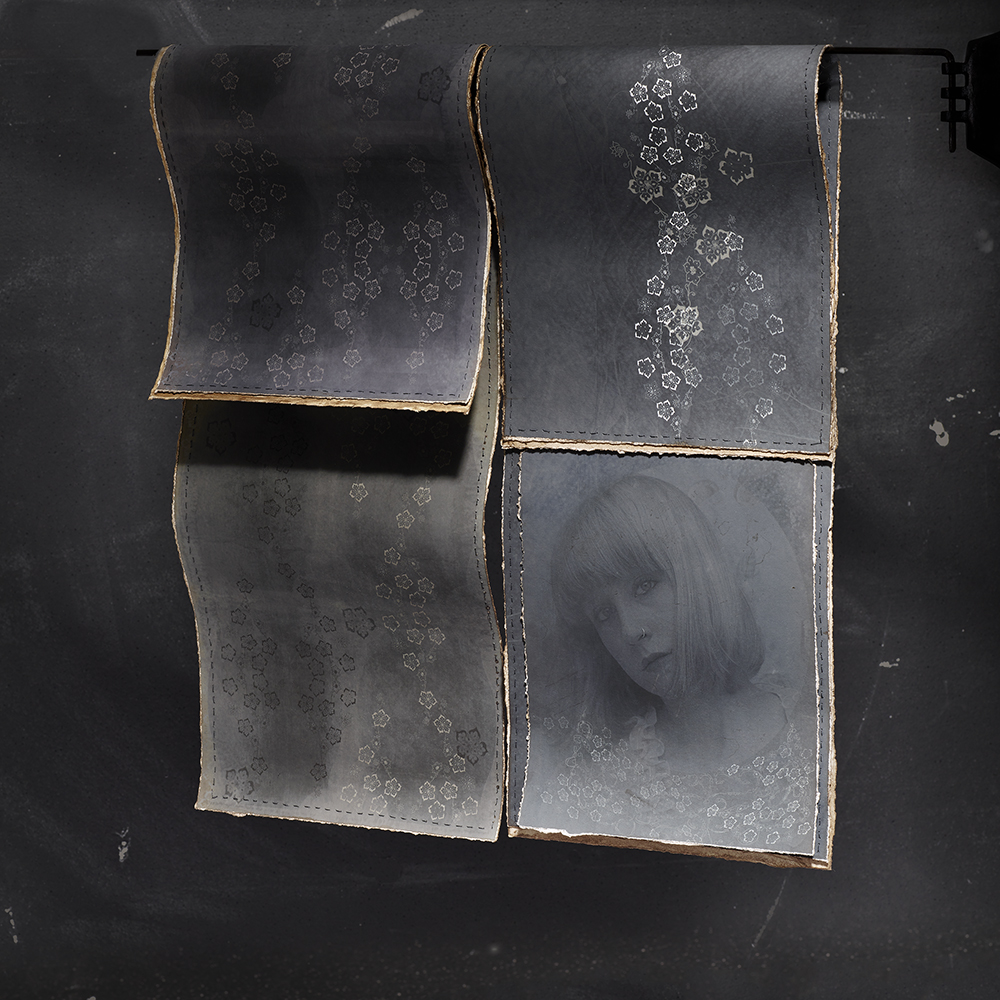 Tattoo Cloak, L. Mikelle Standbridge©, The body itself, in its nakedness, it not enough. For “pretty” and “good” young girls, the God-given plainness of empty skin, free from messages, symbols, and decoration, has been replaced with standards of beautification to include tattoos, scarification, and piercings. My pieces, in their shapes and presentation, remain delicate, “feminine”. 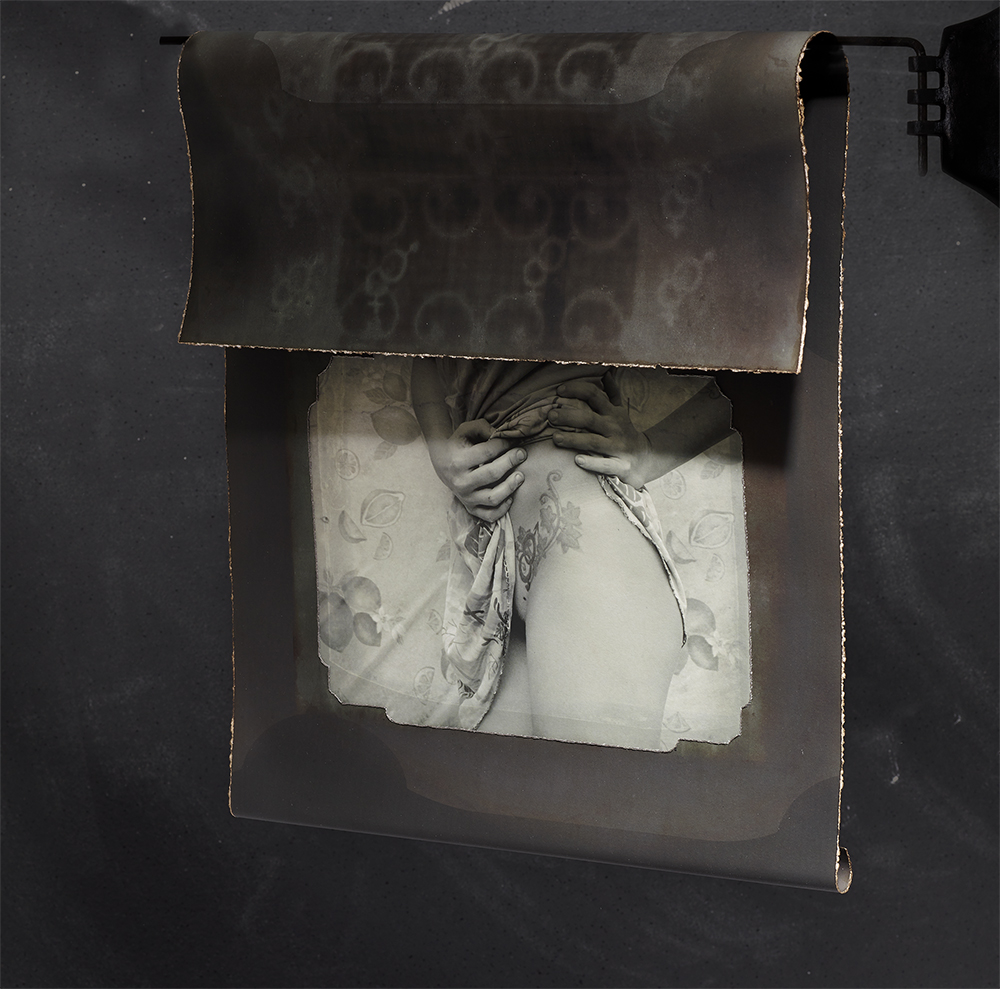 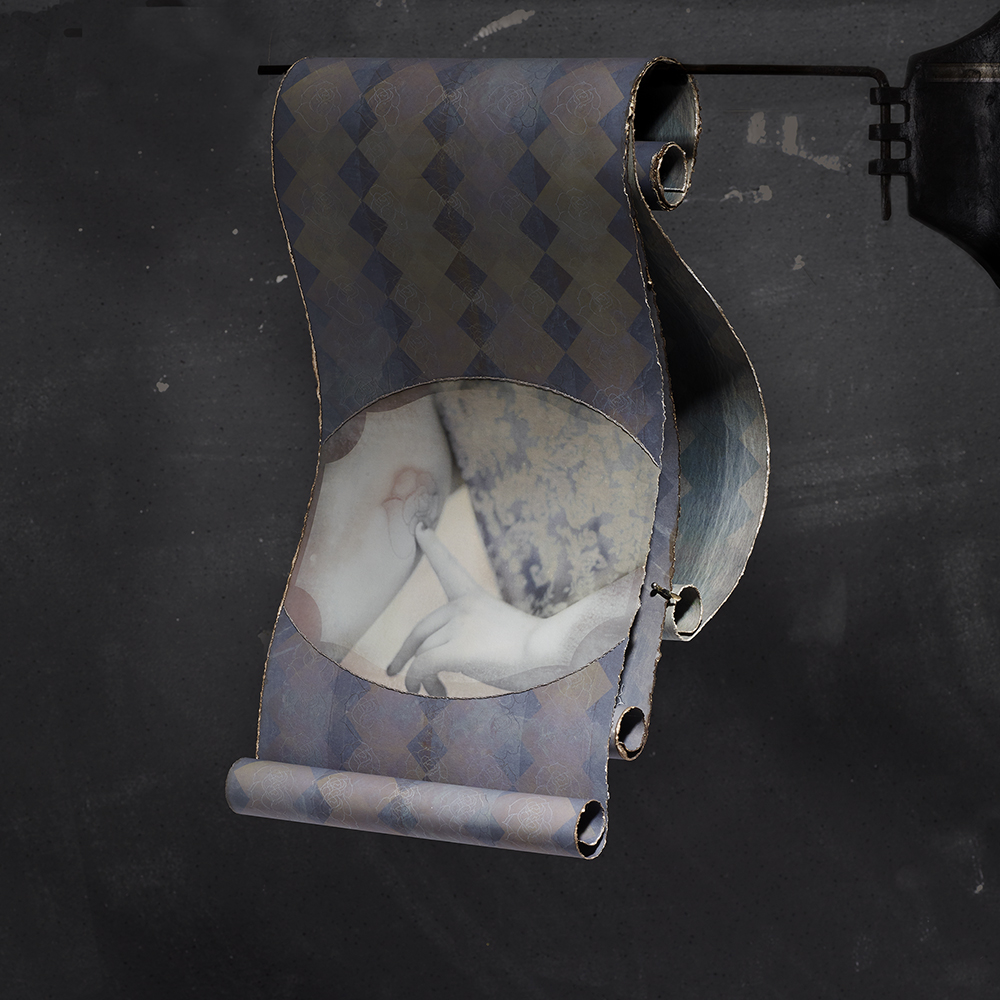 At the three institutions where Mikelle studied photography, the teaching philosophy was radically different from one another and each one left its imprint: San Francisco State University was interdisciplinary and highly experimental; the Univ. of Paris was extremely formal; the Univ. of Chicago was strictly conceptual. After 20 years of darkroom printing and years of working with different themes, always interrupted by a change of house/city/country/language, the Photo-Bodies series finally came to life, creating to date, Mikelle’s most original body of work.  Subconsciously and effortlessly integrating her training, Photo-Bodies is the organic mix of experiment, formal value, and concept.  The series has been well received internationally in festivals and exhibitions. 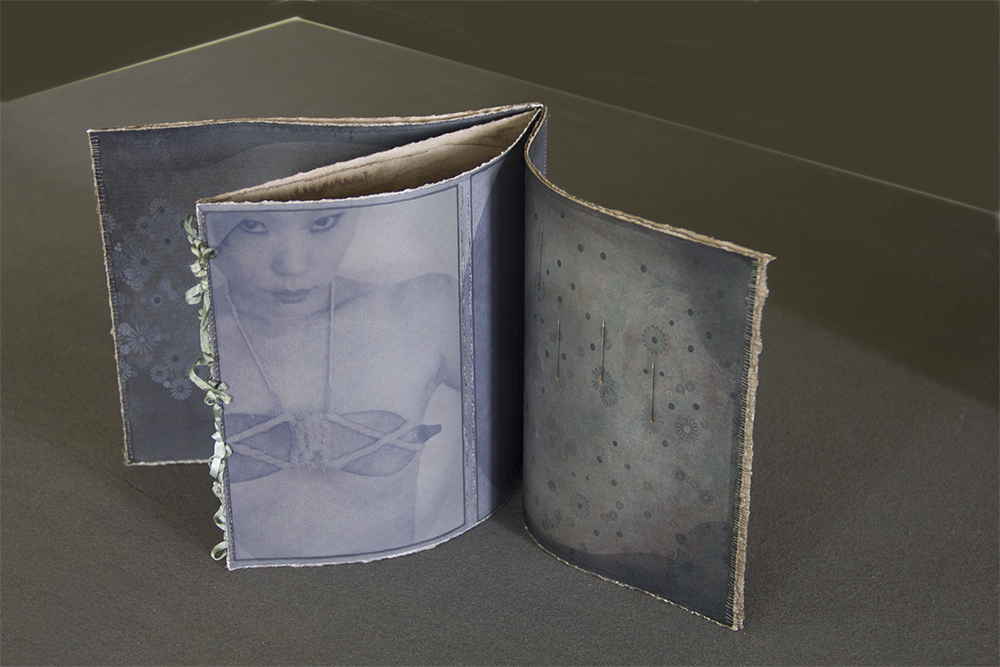 Rebellious Confinement no. 2 (in the era of Araki), L. Mikelle Standbridge©, Born and raised in Los Angeles, Signora D’s ethnic decent is part Korean, part Japanese, and part Columbian. While being frustrated by the confinement and false advertising of her physical appearance (suffering greatly from the constant derogatory – and erroneous – remarks such as ‘go home China’), through her own art making (bra-sculpture), she visits themes of body, ethnic identity, mental and physical freedom, and defiance of prejudice. Her wearable sculpture is homage to the Japanese photographer, Nobuyoshi Araki, known for his controversial photographs of women tied up in ropes, in the form of traditional Kinbaku bondage practice. The form of this art piece is made to be versatile, to take on different facets when viewed from different vantage points, and can take on multiple roles. 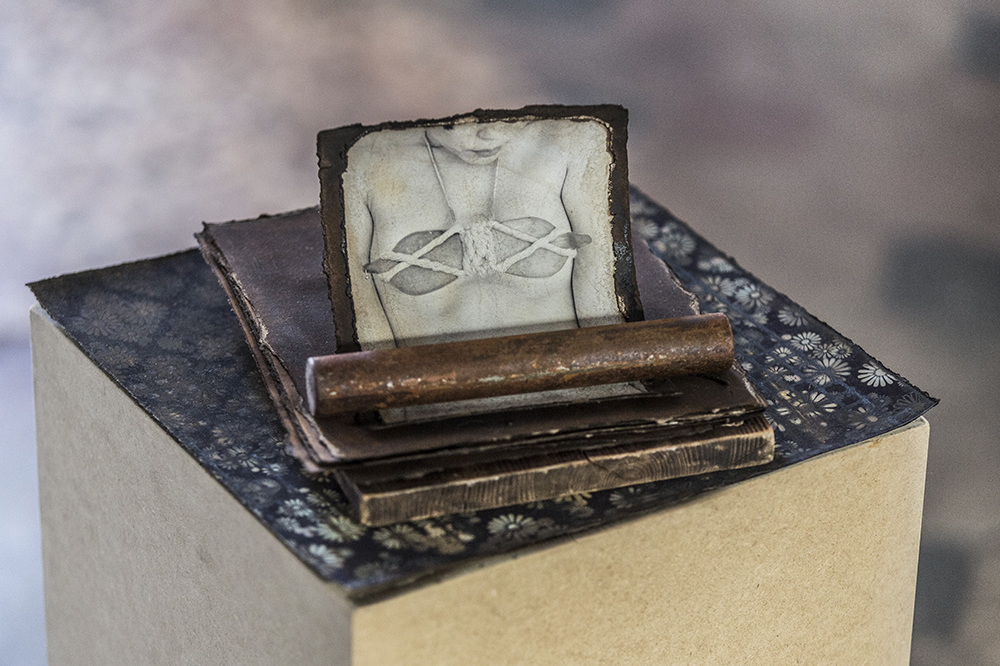 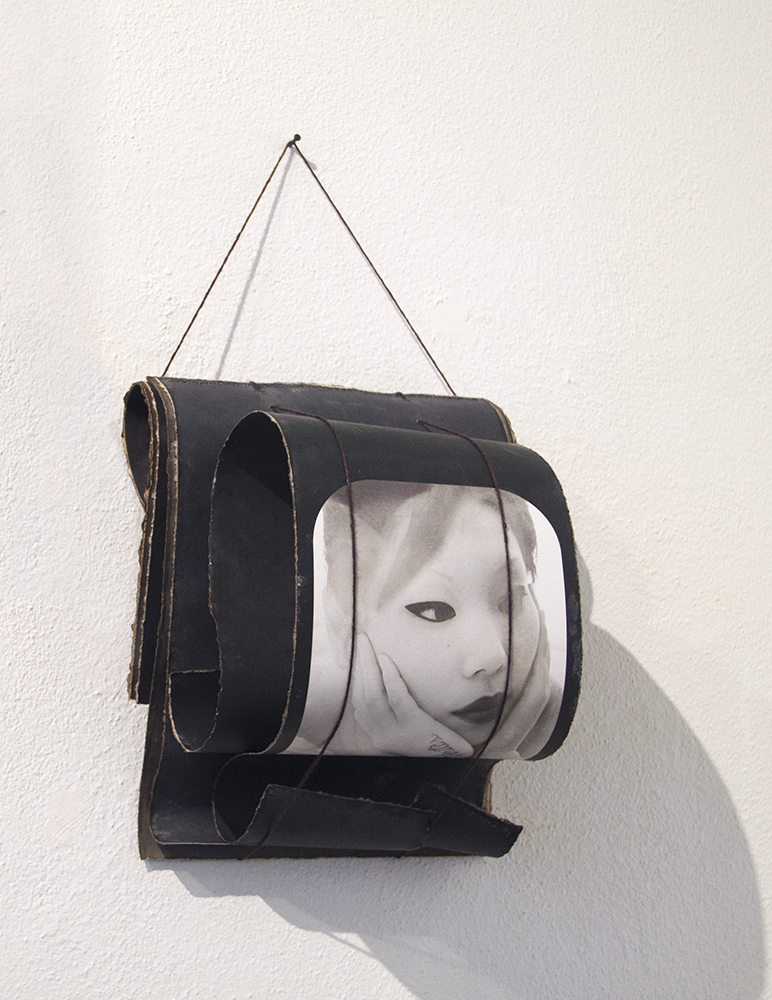 Veritas, L. Mikelle Standbridge©, “Signorina D” always felt as if her eyes were not sufficient in conveying who she really was. They were not enough and they were too much. Against falsity and superficiality, against stereotypes and pre-conceived judgments, and against lies, when she was a teenager, what she wanted more than anything was Veritas (truth) Also, see above. The “Photo-Bodies” are made from fine art photography paper. The prints are a limited edition of 1-9 + I artist proof, but each “photo-sculpture” is hand torn, hand stitched, given a patina, and formed to create a piece that can’t be identically reproduced. Therefore each sculpture, even though part of an edition, is a one-on-a-kind object. Some of my sculptures are similar to one another, but never identical.