Last year I wrote about Parisian street artist J R on Lenscratch. If you missed the post, be sure to revisit it to understand the scope of this amazing work. I thought you’d enjoy a follow-up article, lifted from the New York Times, and written by Randy Kennedy:

The TED conference, the California lecture series named for its roots in technology, entertainment and design, said on Tuesday that it planned to give its annual $100,000 prize for 2011 — awarded in the past to figures like Bill Clinton, Bono and the biologist E. O. Wilson — to the Parisian street artist known as J R, a shadowy figure who has made a name for himself by plastering colossal photographs in downtrodden neighborhoods around the world. The images usually extol local residents, to whom he has become a Robin Hood-like hero. 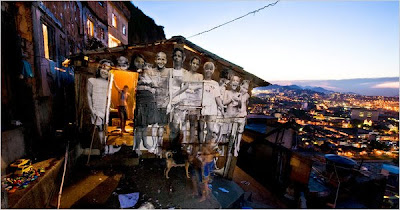 For most recipients, the value of the six-year-old award has less to do with the money than with the opportunity it grants the winner to make a “wish”: to devote the funds to a humanitarian project that will almost inevitably draw donations and other help from the organization’s corporate partners and influential supporters. The chef Jamie Oliver, the 2010 prize winner, recently proposed setting up an international effort to further his campaign against obesity; Mr. Clinton’s wish has channeled significant resources toward the creation of a rural health system in Rwanda. 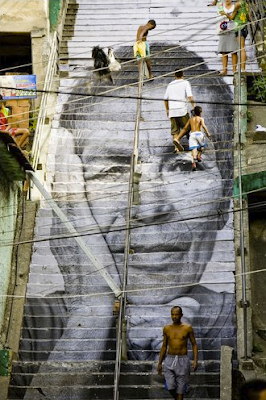 Reached by telephone on Wednesday morning on a bus in Shanghai, where he was headed to work on a largely unauthorized photo-pasting project to draw attention to the city’s demolition of historic neighborhoods, J R said that he had learned of the prize only two weeks ago and that he had not yet had time to think of a wish. 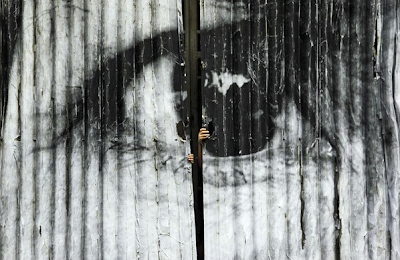 But he said that it would undoubtedly involve his kind of guerrilla art, which he has been creating with the help of volunteers in slums in Brazil, Cambodia and Kenya — where the outsize photographs, printed on waterproof vinyl, doubled as new roofs for ramshackle houses. “I’m kind of stunned,” he said of the prize. “I’ve never applied for an award in my life and didn’t know that somebody had nominated me for this.” 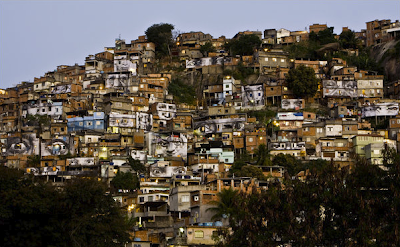 At a time when street art is being embraced not only by the art world but also by branding interests, J R, who dislikes being called a street artist, preferring the term “photograffeur” (graffeur is French for graffiti artist) has become known for rejecting corporate sponsorship offers and other outside help. He said that he reinvested most of the money he makes by selling his art in galleries and at auction — one piece went for more than $35,000 at Sotheby’s in 2009 — into creating more ambitious projects, and that he would use the TED prize money for the same purpose. 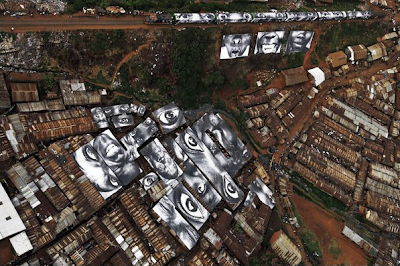 “If there’s one thing I’ve always taken care of with my work, it’s that it’s never an advertisement for anything other than the work itself and for the people it’s about — no ‘Coca-Cola presents,’ ” he said, speaking in English. “I think the TED people knew that that was one of my main concerns, and I feel pretty sure that we can come up with a project that works that way.”

Amy Novogratz, the director of the prize, said that picking an artist like JR — he is 27 and fiercely protective of his anonymity, identifying himself only by his initials — was an unusual choice but that the prize committee felt that his work could “catalyze the whole TED community” to support an art-centered philanthropic project, which will be announced at the organization’s next conference in March.

“One of my concerns at first was that he wasn’t going to be accessible or available, which could be off-putting when you’re trying to get partners to get excited about a project,” she added. And, in fact, the first time prize officials had a Skype conversation with the artist, he appeared in sunglasses with a hat pulled low over his forehead.

“But then he said, ‘You know, I trust you guys,’ and he took them off,” Ms. Novogratz said, “and we just had a regular old conversation.”

During the interview on Wednesday morning, J R said that he had not been nearly as trusting of Chinese officials, as he and a crew of helpers erect towering pictures of elderly Shanghai residents on the walls of a neighborhood that is now more than three-quarters demolished.

“I keep thinking we are going to get into trouble,” he said, adding that anyone he talks to might be an undercover police officer. But then he described an illegal act: pasting a 20-foot-tall wrinkled face around the facade of an old water tower he spotted from the highway.

“We went into the building next door, and it was empty, and we went up to the tower, and nobody stopped us, so we just started working,” he said. “It’s crazy. This city is so huge and overgrown, the more you’re in the middle of things, the more you feel transparent.”